A little early, no? I’m going to be at the Detroit Maker Faire this weekend with all of Friday the 29th being a travel day so it’s either now or next week. If you’re in the area, stop on by the Power Racing Series track where I’ll be acting as technical inspector, Grim (penalty disher-outer), flag bro, or really whatever needs doing. Chibi-Mikuvan isn’t in a battle-ready state, so I’m foregoing bringing it.

For this match, there’s not an extensive backstory and tale of preparing, so I’m going to just jump right into the analysis! So be warned, don’t hit the “Read More” line unless you actually do want to Read More! 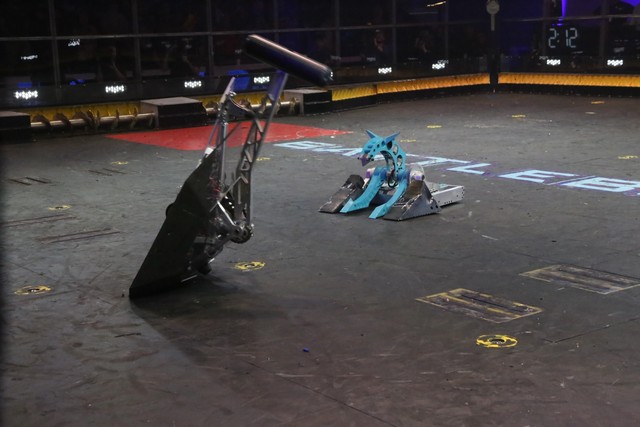 …OMG IT SUCKED SO MUCH I HATE IT UGGGHHH

Drama aside, I straight up got out robotted. No qualifications or conditions – John worked hard to earn that win, and he deserved little bit of it. And the key factor in this out-robotting is Overhaul’s armored pontoons – what fended off Cobalt extremely well, as designed, but ended up hampering me against a bot with a much lower surrounding armor.

Prior to the match, we switched Overhaul back to the long arms. These poked past the pontoon ends to make sure they were the first thing to touch Beta. The battle plan is to “ice skate” my way around – pull mad drifts and try to get around to Beta’s sides and back, and also to do the same and waste his shots. Beta tends to upend itself if the hammer fires at all, so my plan was to be around for that to happen, and to try and prevent a self-right or at least get in the way. From watching the Lucky match, I knew it could do so very quickly, so I would need to keep moving.

The observent will also notice that Overhaul’s tooth has been turned around (Compare above and below image). I did this because Beta has sloped sides, so having the tooth slope inward was a disadvantage. With the tooth pointing “out”, I had more reach to grab in a position over the steel armor.

So how did this work out? 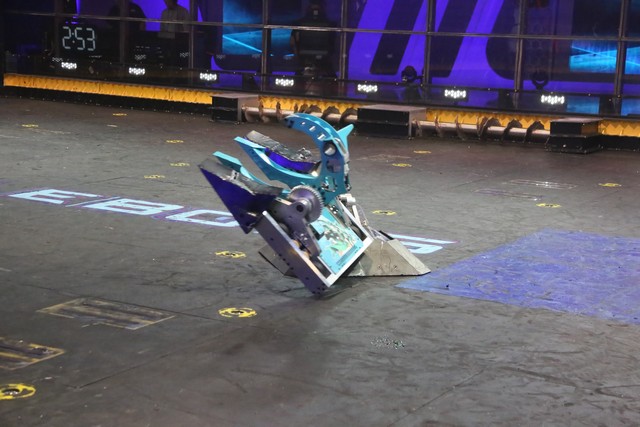 About that well. It took me about 20 seconds to realize that I was completely boned, and that this match is now entirely a survival situation.

Overhaul’s heavy armored pontoons ride about 1/4″ to 3/8″ OFF the ground by design. There were moments last year where Overhaul 1 got stuck on the floor, and I wanted to avoid those moments again. In retrospect, I overcorrected, a little manifestation of “second version effect“. I never thought strategically about what I had to do in case I faced a very good wedge, mentally writing it off to attacking with the arms alone, which scrape the ground, instead of the pontoons. In fact, I probably would have done better here had the pontoons been entirely removed, as they repeatedly got in the way of trying to undermine Beta.

Making it worse was that by this point, the box had very poor traction. I wasn’t kidding about ice skating. In the match with Cobalt, I didn’t notice this as much because it was a spinner match, not relying on pushing power, and I was easier on the stick to avoid planting into Cobalt the wrong way. In this match, I tried to drive much faster – and immediately realized I could barely stop or turn. Beta, geared for a lower top speed, was more easily controllable – the multiple spins and J-turns I pulled were to try and avoid the direct line of fire of the hammer.

In a sense, I got much more than I bargained for with the brushless drive system. Yes, it was thoroughly proven here with three minutes of HARD driving, but it also proided Overhaul with so much drive power to available traction ratio that I was unable to utilize it. Imagining buying a brand new Dodge Charger Hellcat and just driving around in 2nd gear doing burnouts everywhere. Compounding the poor traction of the box and the overpowered drivetrain was that the Colson wheels were never designed for this much power: being made of thermoplastic rubber, I was literally starting to melt the tread off of them. By the end of the match, the middle set of 5″ Colsons measured 4.65″ or so based on inspection in the pits afterwards.

A chunk flew out from under Overhaul during the middle of the match – this was the front left wheel’s tread, which testing showed was bonded incorrectly along with the other front wheels. This more or less made Overhaul drive on 3 of 6 wheels due to the “rocker” arrangement of the drive wheels, in which the center wheel is set very slightly lower. 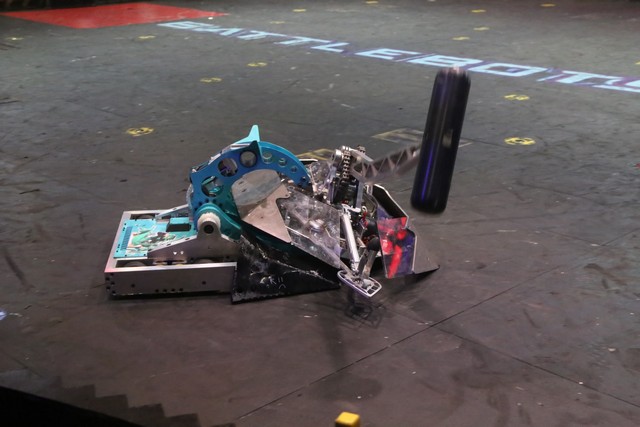 I was really only able to get a good hold on Beta once, and even managed to fumble that one. I kept the arms just raised enough with the intention of cramming Beta into the screws (which went as planned), but when I backed up to try a different hazard, the top clamp simply slipped up. In fact, I think you can see it move upwards in the following gif:

Wow, it looked like I meant to do that!

This was an unintended consequence of using ball screws in the linear actuator. Ball screws are upwards of 90% efficient, meaning they can be easily backdriven by forcing the nut along the screw, unlike most solid leadscrews. By locking the actuator into “high gear” given that I did not implement the P90X dual speed shifter, it actually took relatively little force – like mashing a bot against a wall – to force the actuator open. The ability to drop into low gear (16:1 instead of 4:1) or using a non-backdrivable leadscrew would have saved this. Essentially, I was so focused on the 90% efficiency of the ball screw to provide the clamping force I needed, that I neglected to account for the unintended side effect of an outside applied force being able to backdrive the system. That is the perennial problem of distilling complex engineering projects into one-dimensional independently optimizable pieces.

I was used to driving Überclocker, which is a clamping bot, but it uses a non-backdrivable leadscrew which doesn’t need me to keep effort on the controller  while raising the lifter. This fact escaped me during this match, a stark sign of lack of practice and relying on your mental model for something just barely different enough to cause pain.

But enough about my strategic woes. Let’s see some SWEET, SWEET DAMAGE. 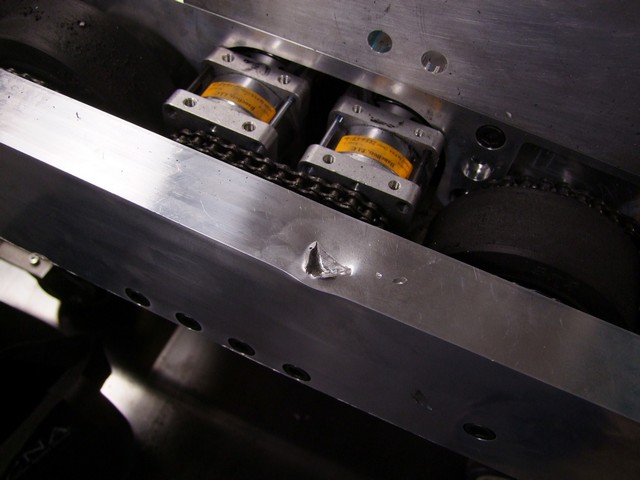 One of the early *boop*s indented the frame rail quite nicely, though it was inconsequential. This gives you a rough idea of the power of a Beta swing if you have ever used a center punch or lettering/marking punch on metal. The divot is about 3/16″ deep. 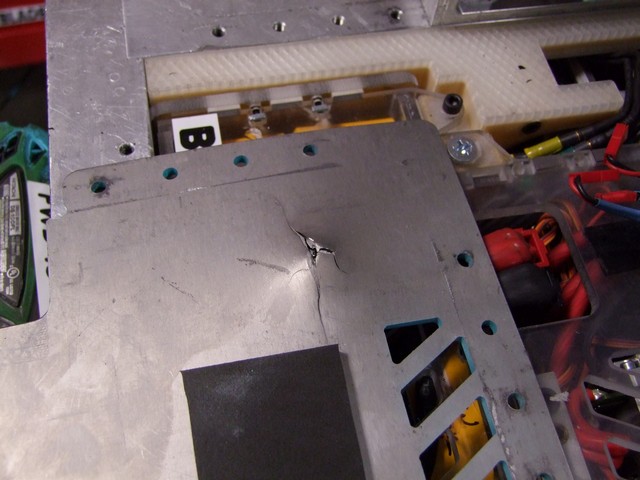 Beta got a few good shots in on the top plate. That’s 4mm 6/4 titanium cracked through! 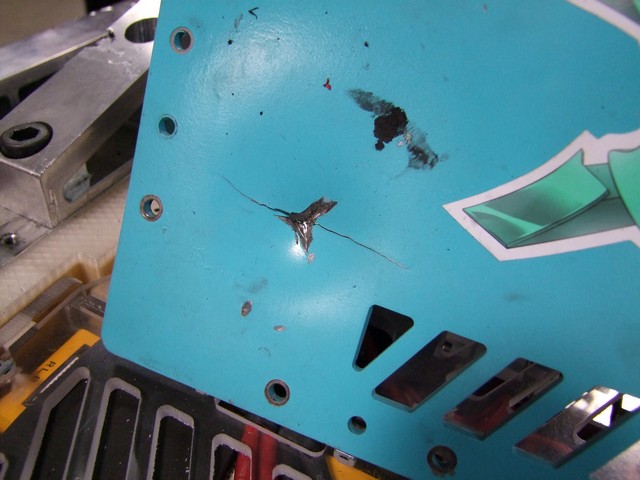 The top side of that dent. 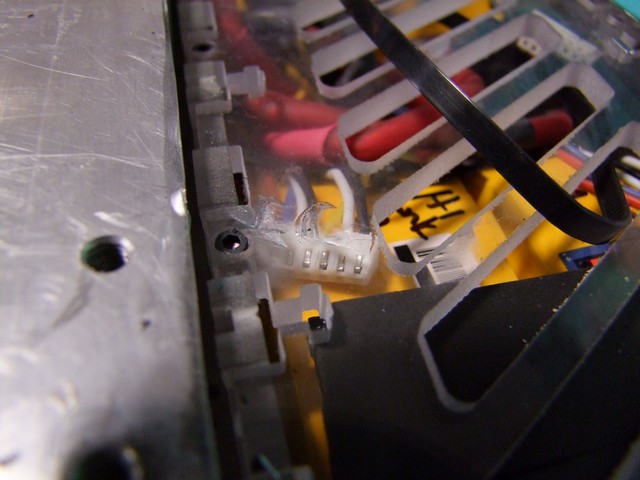 One of the shots near the end was on the ventilation grating, which allowed the hammer tip to actually get in and hit the battery box. Wow, am I ever so glad that 1. the batteries were in 1/4″ polycarbonate enclosures, and 2. there’s an airgap between the enclosure and the lid. Take some design notes, people.

The last hit of the match, Beta actually landed it straight on the master switch bank. Now, I actually didn’t take a picture of this or talk about it much during production, but there is a Markforged Onyx fortification topped by a 4mm titanium plate that hangs over the two custom master switches. I’ll go find one at some point, or take one of the spare that’s on the bot right now.

But basically, in one hit, Beta blew that off and split the drive power switch housing apart, which meant I lost all drive power. That was the money shot; it’s done. This happened basically at 2:50, so the match went to a judges decision, and was not declared a knockout. 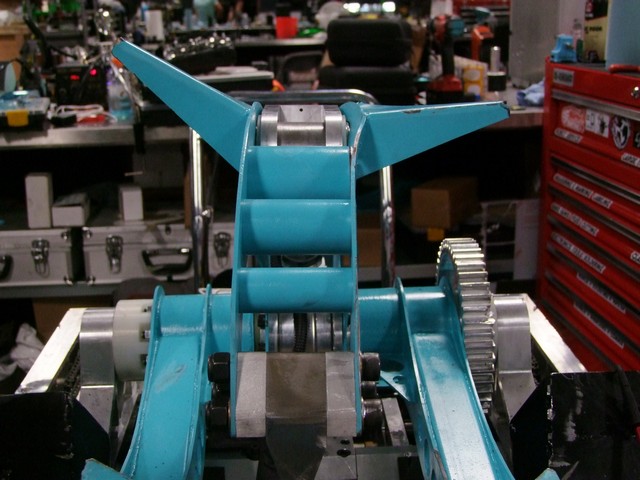 And of course, now we have the source of the “Pikachu ears” state of Overhaul as it stands now, if you’ve seen it in public photos! A glancing hit in the middle wrenched the left side ear down and buckled the AR400 4mm plate sides of the clamp arm. You can sort of see it being crooked in this photo. The ear bending down pulled apart one of the transverse tube welds, and also crimped in the hollow tube I’m using as an actuator trunnion. That thing is now going to be hard to get out. 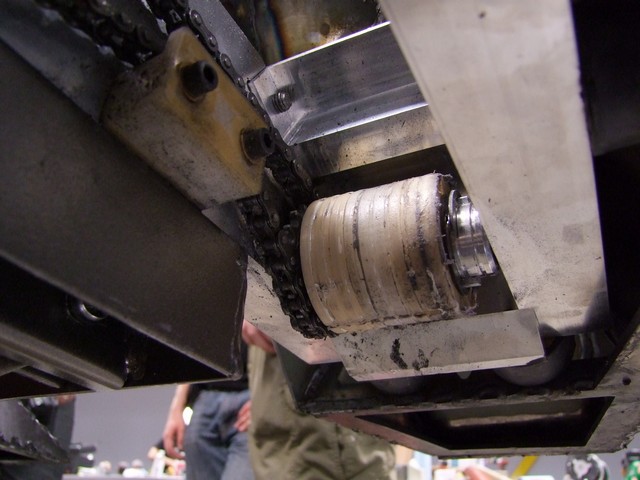 In the end, I actually lost BOTH front wheels. So really in the latter parts of the match I was running 2 wheel drive! This system will need to be thought out way harder for #season3, whenever that comes. The entire traction system of the bot needs a… 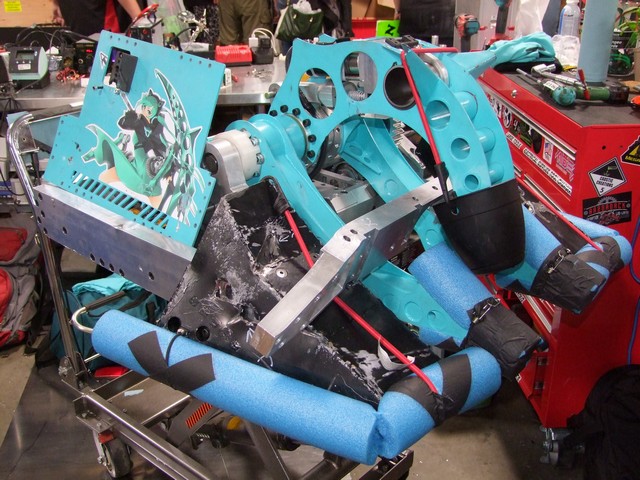 A post-match “glory shot with all the damaged and replaced parts! The “money shot” to the master switch bank can be seen to the upper left of the top armor, in the form of half a 3D print. 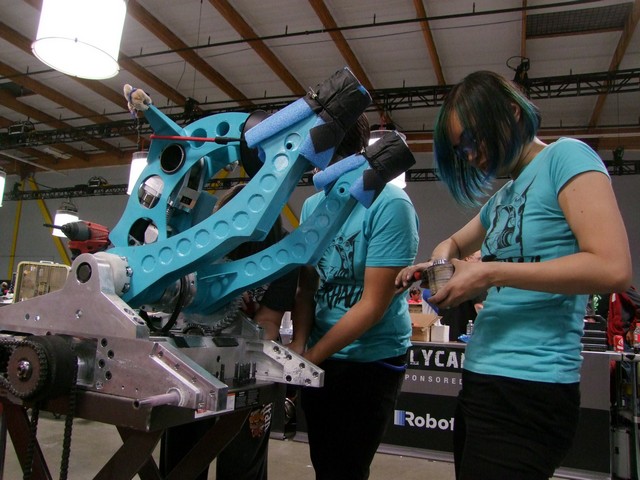 But the end of the tournament does not mean the end of all box time. We decided to reprep the bot for rumbles and grudge matches. Above, Cynthia and Paige are seen replacing the front wheels, while I presumably am doing something els… nah, that show with John and me was completely accurate. 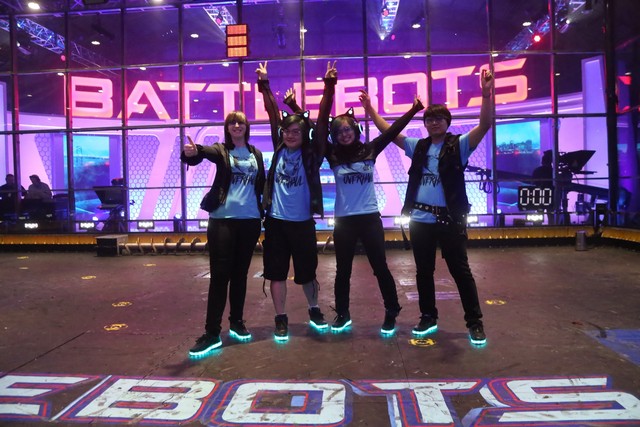 And so ends our official #season2 run. After the Detroit Maker Faire, I’ll do a more in-depth post on what worked and didn’t, and the implications of all of this for #season3 Overhaul, as well as showing some of the modifications and changes I’ve already made since May to test my ideas; remember, I’ve already had two whole months to sit in the corner and think about it!

In the mean time, I’d like to thank Equals Zero Robotics’ sponsors this year for supporting our shenanigans fully and helping us break some new ground in the world of robot combat, even if all of them didn’t work out the way we intended.

5 thoughts on “Overhaul vs. beta: The Post-Match”