Sup everyone! It’s now like a week and some after CES, and I clearly couldn’t be bothered to post about it as soon as I got back. Maybe it’s because I don’t get paid to write clickbait articles for the millennial divisions of aging news publications. Nah, I’m here to write postmodern shit-takes on the nature and origins of barely-functional demo products!

Or rather, I turned right around from CES and helped run the 9th-ever MassDestruction literally the morning I landed, and then proceeded to go back to launching my vaping company. 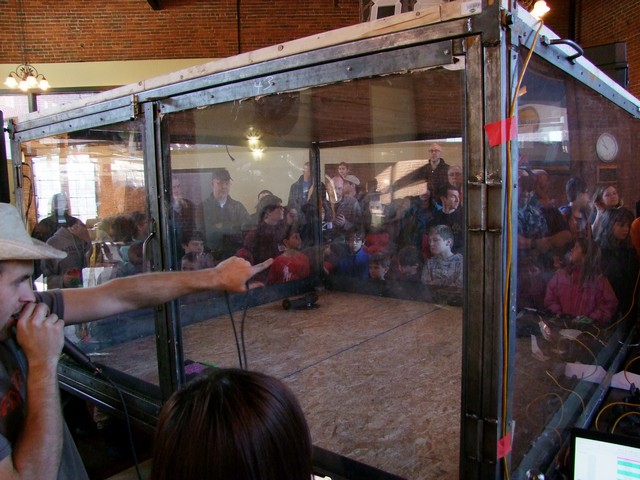 DIS YA BOYS YUNG MODULUS AND M.C. MASTER-CARR DA KING OF DA CHARLES RIVAH CUZ THEY NAMED IT AFTER ME

There’s an interesting story about that actually – I designed the new MassDestruction arena in the roughly week and a half before CES, leaving all my friends to scramble to build it in the week thereof, making me the most deadbeat possible dad. I went to Vegas to get shitfaced and party instead! Okay, to be entirely fair, I also scrambled to make sure the materials and supply/tool chain were in place, but they did all the physical labor – of which there was a lot!

I’d like to write up the full arena design pretty soon, since I think the construction technique was pretty innovative.

Back to CES! This post covers basically the adventures of Wednesday and Thursday, and is basically the extent of my exploration at CES minus a breeze through the “Normie Hall” (aka Central hall where all the huge consumer companies set up).  I was particularly excited for Wednesday, because I wandered the depths of what is basically Chinesium Alley: 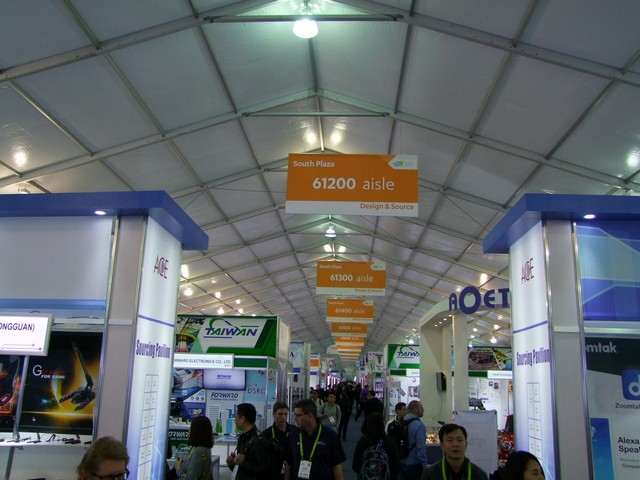 They called this the “Design and Sourcing pavilion” but really it’s where they scooch all the Chinese (and other countries, but China by vast majority) vendors. It was in a massive tent set in the south parking lot of the Las Vegas Convention Center. Inside is Chinesium of every possible composition you can imagine.

You know what? I can come to CES just for this and be happy. It’s not even an industrial/commercial trade show and there was this much Chinesium. Y’all know me – I skip right over the 8K fruit rollup TVs and smart toilets and prefer to see the behind-the-scenes clockwork instead. Like, seriously – you guys are an industry trade show, not open to the public, and I am an industry attendee who knows maybe just a little more than the public. Stop trying to sell me the magic.

If there’s one lesson that can be taken from my website (somehow), it’s probably that nothing is actually made of magic and even the best-planned products always fail in some way first. To come from an environment where I tried my darndest to have my students understand that, to one where the wool-pulling is not only expected, but automated and internet-connected with its own app, means I probably have a more abrasive approach to the show than most.

But the Chinesium hall was honest. 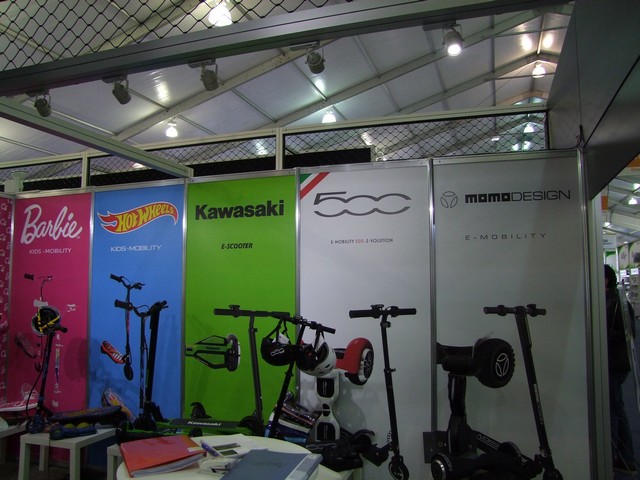 Maybe, uhh, a little too honest. 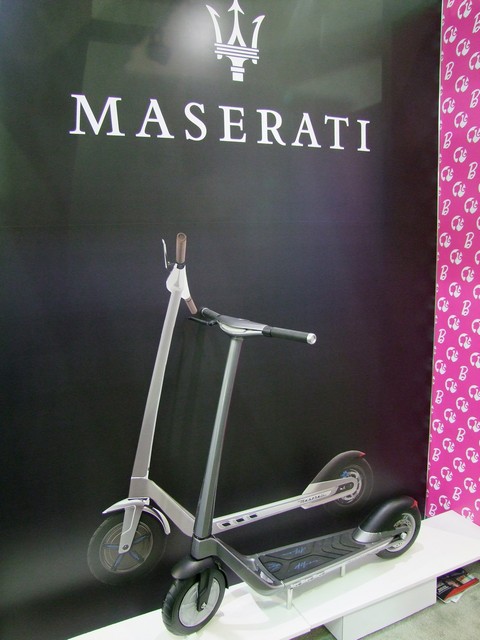 Possibly even blatant at times.

What I mean is the vendors here had no face to lose if if their pre-hyped smart home product failed to smart in front of an Afrojack concert knockoff and left their CEO a rambling mess on the stage. They brought products and services, and they were there to trade information if you were looking for it. If anything, isn’t this  what CES should be about?

(ok, not literally Maserati-stickered scooters, but you understand my perspective, no?) 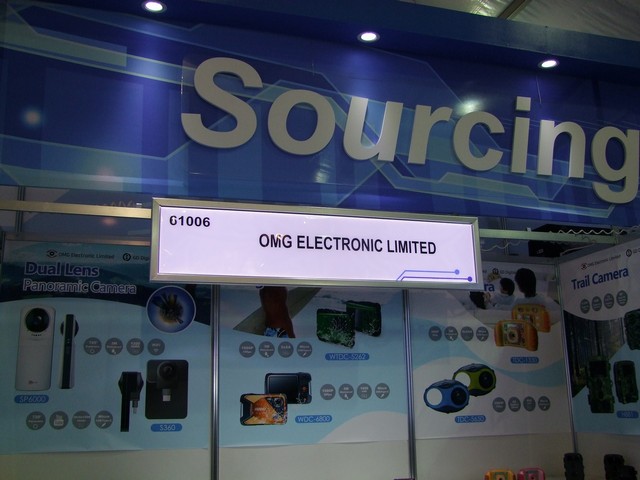 Chinesium does beget some pretty Chinesium names, though. Some of them were pretty entertaining, including this one. 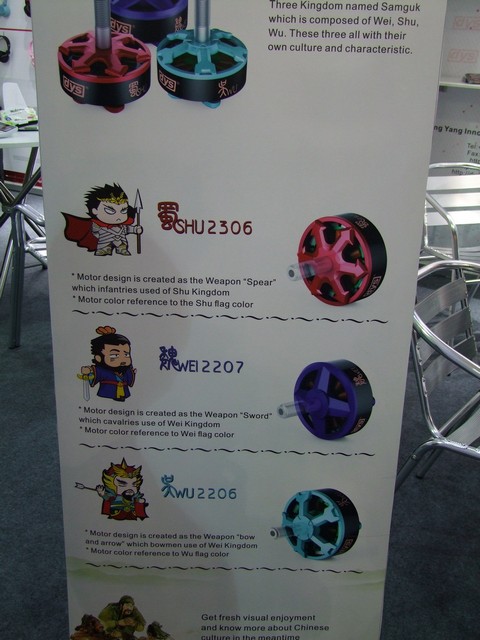 Chinesium marketing was in full force here too. So you named your three small outrunners after historical Chinese warlord kingdoms? What does this make the 150 and 200mm outrunners then!? We’re getting into some Yuan Dynasty and Mongol Empire shit now…. 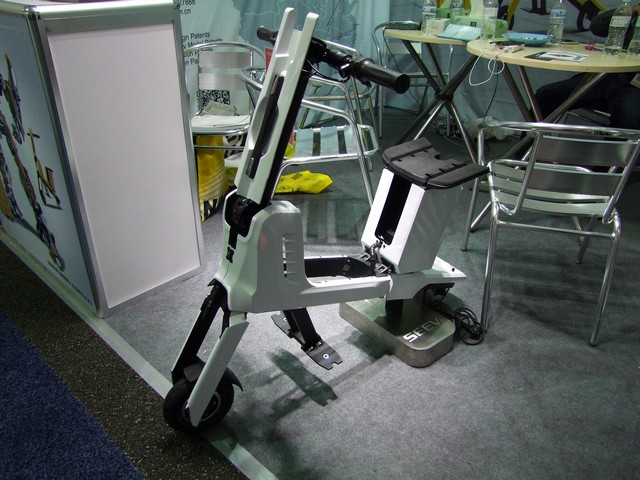 Silly scooters of all kinds abounded! Interestingly enough, there were some products I recognized from the main convention center floors. I wonder which came first…

This one in particular I can welcome, but the wheels are really and truly too small for the design, especially with those long forks. I actually walked up thinking it had no wheels at first and was just a frame, like a sample of what the company constructs for an OEM of the actual scooter. Nope – those are the wheels, the same 8″ generic scooter rims I’ve used on a dozen builds.  I’d still rock one though. 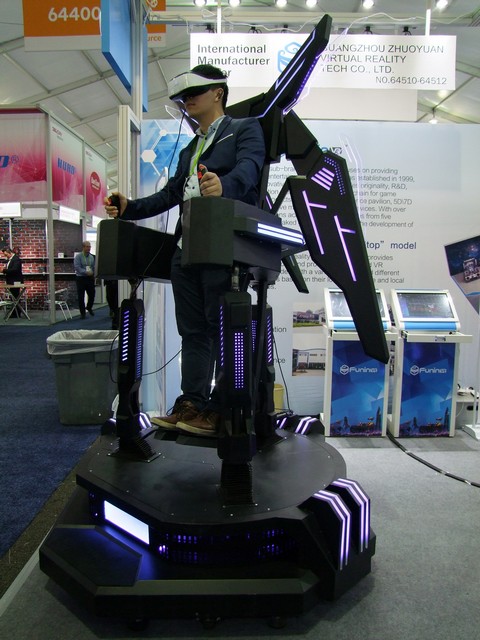 Some kind of Pharah Simulator. I didn’t wait to try this one, because at this point, I had already almost wrecked one VR simulator… 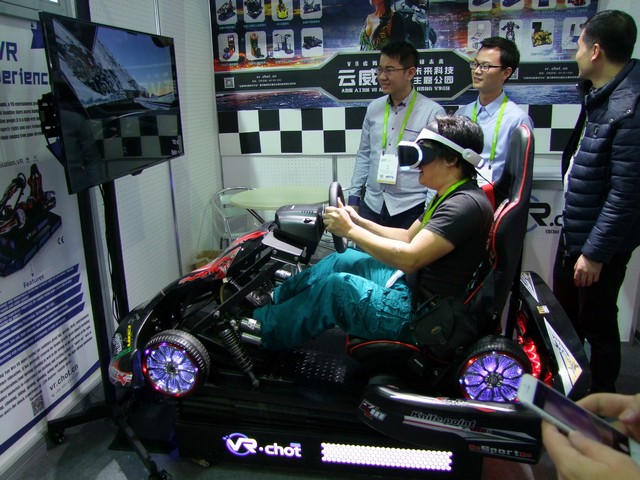 Yeah, I blame my van control loop being too tightly tuned. Notice how hard I try to cut the steering wheel multiple times, since Mikuvan, despite its most sincere wishes, is not a sports car and takes several turns to go lock-to-lock in either direction, and my experience driving in snow makes me near-automatically crank the steering wheel to quickly counter-steer as soon as I think a slide is beginning. The VR steering gear was much more sensitive, and also the lack of actual acceleration and body forces was confusing.

This was a great example of having to de-train yourself from something in order to be good at a nominally similar skill. I bet I could get used to the VR simulator if I had an hour or so with it. 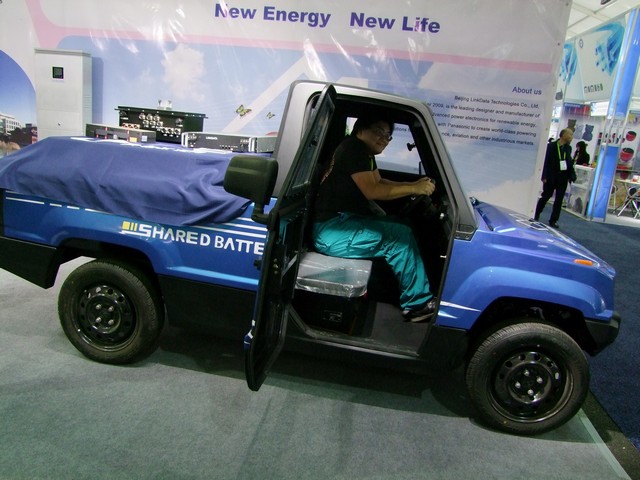 This thing. Could I just get this as a simulator for real life? Ladies and Gentlemen, the U.S. Federal Government will not let me own and then operate such a device on public roads, and that is a travesty of justice and freedom. This is all the truck most of America actually needs. This object would handle 99.9% of my daily transit and hauling needs. Why can’t we have these?

(Okay, it’s kind of claustrophobic inside even for me, and I’m not that big, but my point stands) 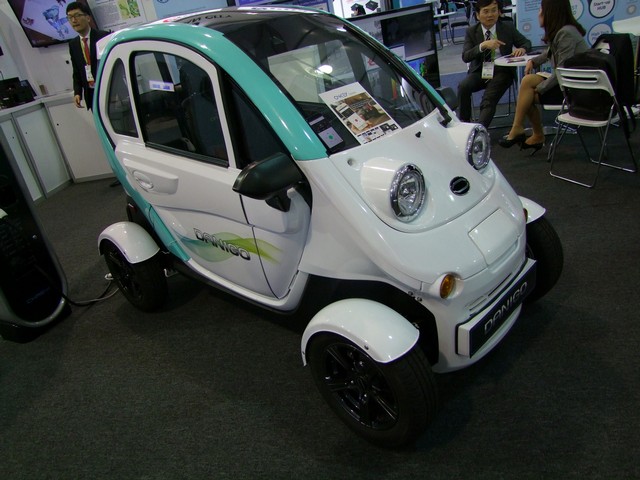 This thing, too, was adorable. I wasn’t entirely sure what was being sold here – it didn’t seem to be the microcar-quadricycle, but a service or battery charging station. Either way, if you haven’t heard of them, these things abound in China and in some regions of Europe, such as France. They’re often driven by senior citizens, at least in the parts of China I’ve seen them. 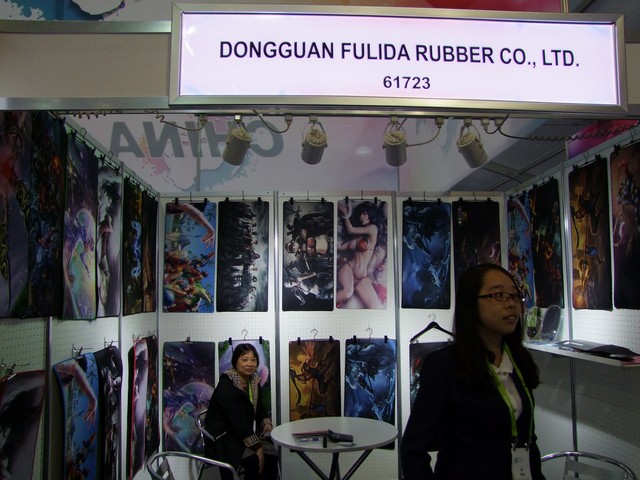 Who would buy a Haru-chan mousepad for BattleBots #Season3 whenever we get around to it!? I have a supplier! 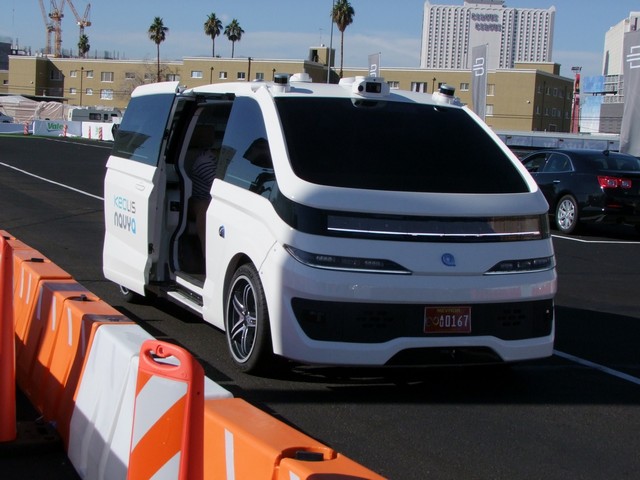 Thursday was a sweep through the automotive displays in the central and north plaza where the autonomous driving demos were centered, and then also a course through the LVCC for the indoor automotive displays as well as the 3D printing and drones areas.  All of this touring outside can be condensed down to one photo of me inspecting the Byton Concept: 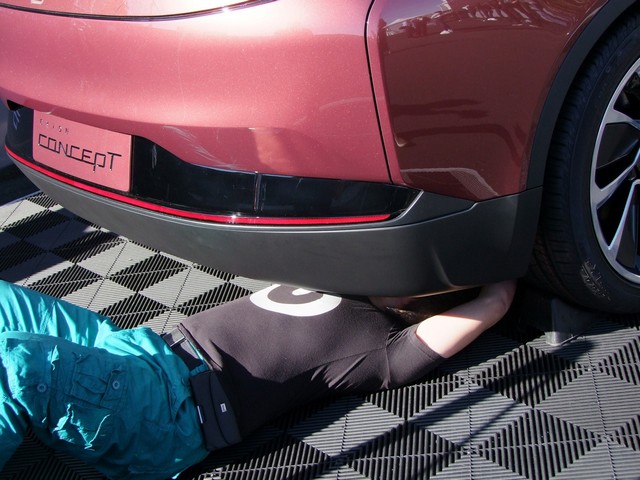 Sadly, this model was a static display model – it had no drivertrain, just steel pegs to hold the wheels on. 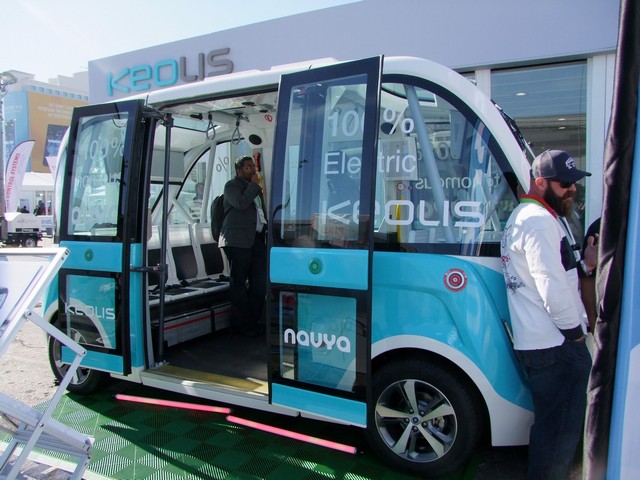 The autonomous shuttle that got hit by a truck has returned! The whole outdoor demo area was one big “Buy Velodyne Stock NOW” advertisement. NVidia is probably making a killing right now – basically every single demo prototype uses NVidia gear. 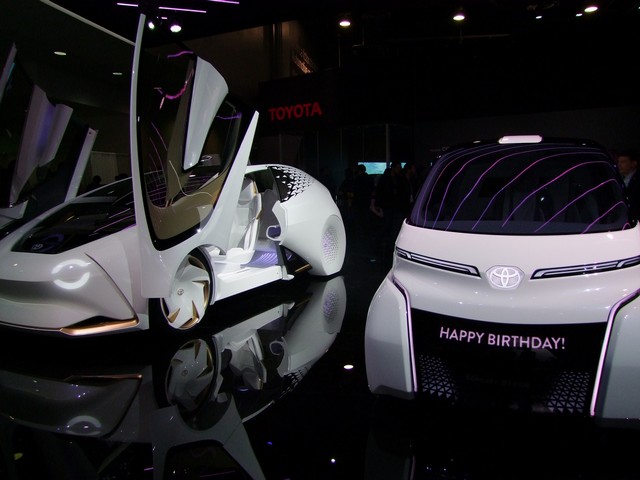 Inside the automotive area of the LVCC – there were a lot of future spacecar concepts being shown here. This is the Toyota booth, whose displays were quite cheery and festive. I guess it’s at least someone’s birthday who walks by, so maybe they’ll be inclined to believe that Toyota already knows everything about them!

All I can think of is why would you put a screen exactly where the bumper should go???

I’m really bad at this “future of automobiles” thing. I maintain we need a return to the days of prismatic vans. 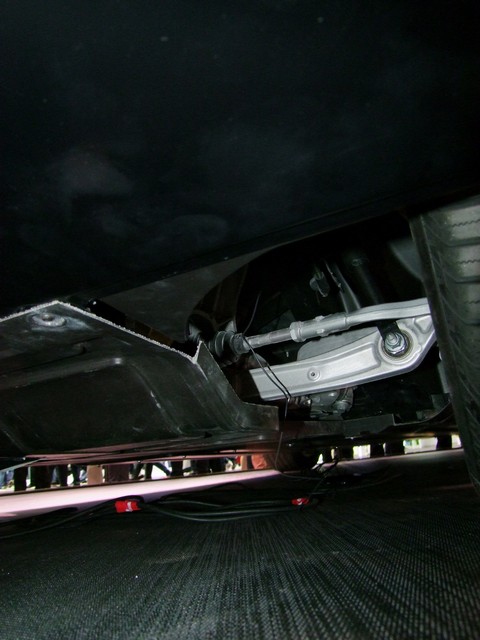 I took a creepshot of the actual Byton Concept model with drivetrain gear. Sadly, it’s skid plated all the way, so there’s nothing really worthwhile here besides “Yeah, it has suspension links”. I was then chased away by one of the booth operators, who directed me to a powertrain engineer to answer all my questions instead of trying to perform live industrial espionage to find out.

I learned from Mr. Powertrain (who clearly doesn’t believe any of his own company’s marketing) that the running gear is all Bosch, including the inverter and traction motor, and the batteries are prismatic LG Chemical modules.

Overall, this reinforced my idea that the car itself is very generic and lego-blocked, and that the company more emphasizes the lifestyle and the ａｐｐ ｅｘｐｅｒｉｅｎｃｅ. 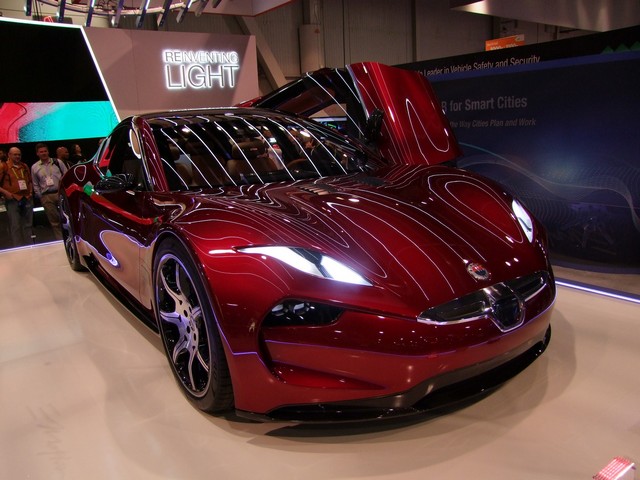 This is the Fisker eMotion. The relation betwen all the parts of Fisker is too complicated for me to understand, but this is basically zombie Fisker’s new product, created from scratch after the failure of Fisker Automotive. It’s not to be confused with…. 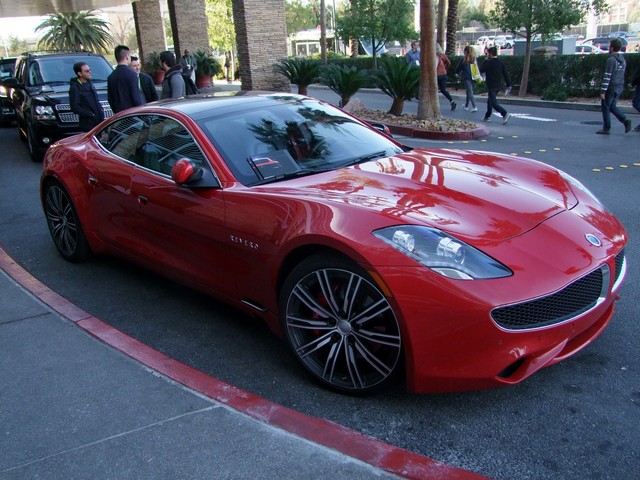 ….the Karma Revero, which is a relaunched Fisker Karma shaped object using the previous bankrupted company’s IP and assets.  What?! Okay, on this episode of fancy spacecar family feud….

Y’all aren’t vans. I know it’s “easy” to make a high performance EV these days, so I’m just waiting for the chance to do one up  myself because it doesn’t look like any of you guys are going to. 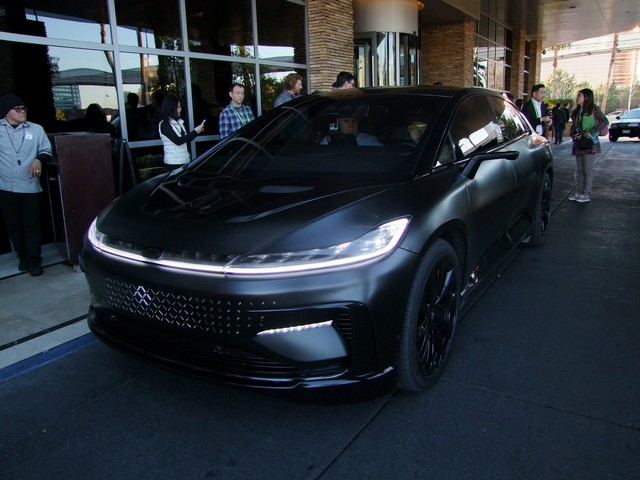 YOU’RE NOT A VAN EITHER. But you’re close! My favorite whipping child of the Silicon Valley automotive startup industry is now parked in front of me! This is a real live Faraday Future FF91, in Matte Black.

Faraday’s had a rough year, so they didn’t even have a CES presence besides this one unit giving test rides. Wait, test rides!? I waited about 45 minutes after hearing this on the Internet at where they were staged, at the Renaissance Hotel immediately adjacent to the LVCC.

Nope, press and VIPs only. It turns out I was neither one. Who knew!? Anyways, I rag on Faraday a whole lot, but I would like to see this thing become a production model even if (and I prefer it this way) it ends up outside of any kind of lifestyle ecosystem like the kind Byton is trying to stir up.

And if not, I will try my hardest to be at the liquidation auction. 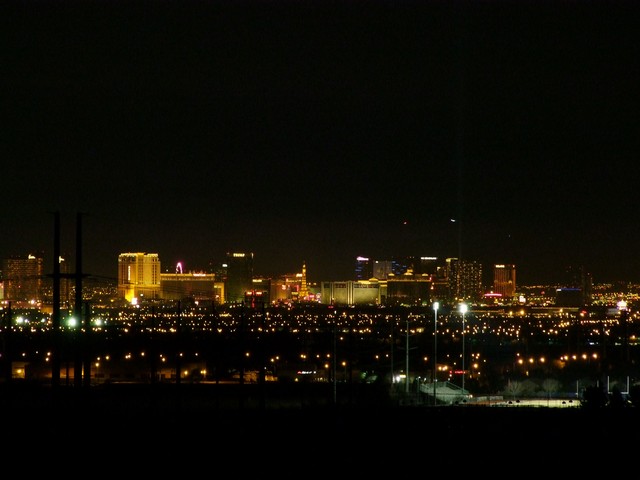 And that’s it. There’s no lesson or takeaway for me from CES. It was great to see where the industry congregates and get a look at a lot of the startups. Many companies are vying for the chance to entertain only a few markets and industries. For me, the joy of CES (besides the days worth of Chinesium) was more like… seeing everyone’s different (yet similar) approaches and takes on appealing to their mental model of their customer base.

I like to think that my two or three product lines were very successful at hitting my target customers,w ith RageBridge2 now basically a standard in the robot fighting world, Brushless Rage sales going quite steadily, and somehow moving several thousand Hall Effect sensor rigs already in the past 5 years – seriously, I never expected to sell them past roughly 2013-2014, but a few go out every week! Then again, I’m also not on purpose trying to become a multi-million or billion dollar company, so my priorities are different.

Back to your normally scheduled robot content hopefully soon!