Two years ago during Motorama 2013, the concept of Colsonbot was born during a “well, just how shitty of a robot can you possibly make?” discussion (which itself is sort of the precursor to assbots) over post-event builders’ dinner. A couple months later, the first Colsonbot was born, in time for Bot Blast 2013.

After Bot Blast, it seemed like the Colsonbot meme had run its course. Hurray, I made a small twitchy meta-joke that involves a robot which, itself, is a wheel! With Colsonbot really unable to do anything else (…by design), after Dragon Con 2013 I removed most of the broken parts and the rest of it lived in my “tomb of little bots” along with the husks of Pop Quiz and PTDN. It seemed like nobody else would ever find out what a Colsonbot does.

Alright, alright, I’ll stop. . This is serious robotics going on here. After a year of peer-pressure, I’ve finally caved and am REBOOTING Colsonbot. Bot Blast 2015 was coming up quickly, and a few of the MIT folks were planning on going, so why not?

The only issue with the first design was the reliability. Due to the limited space inside a 6″x2″ Colson wheel – only about 4″ diameter x 1.1″ tall, I couldn’t fit much more than “antweight class” equipment – four little Sanyo-esque gearmotors from Pololu, and a short 28mm outrunner motor. Ultimately, the shell was too much for that small weapon motor to spin, so it overheated. The Pololu motors are also too fragile to be used in the 3lb class in the direct-drive configuration they’re mounted in, so three of them ended up damaged.

For the former problem, I decided to rotate the motor 90 degrees so it could be much longer. Consequently, this stuck into the space where the battery pack used to be, and by moving the battery, I needed to drop two of the drive motors. Basically, I started having to play “part tetris”:

It was at this point where I realized that I was basically building an antweight and entering it into the 3lb class, and even as a joke, that would just get owned too quickly. I also remember that we bought a pile of 8″ wheels for Overhaul, which were not used since we went with another tire choice. They’re 8×2″ Colsons. What can gaining 2″ in diameter get you?

A whole lot. I was able to move up to “Silver Spark” motors; four of them, which means now this is actually a competitive drivetrain. There is now so much open space I can go with two weapon motors. Suddenly, Colsonbot became less funny and more competitive.

The challenge now was to wrap a frame around this hypothetical component layout. I decided it was still going to be 3D printed, to keep with the theme, so I started with a solid cylinder in Inventor and began hacking away at it. The frame is built in the style of old Colsonbot and also Pad Thai – a unibody with removable “chunks” which clamp the motors in place.

Here’s a draft of the frame before cleaning up details. I’ve included 2 weapon motors here for layout purposes, but at this point I already figured the weight was going to be too much since the 8×2 Colson is a whole lot of rubber.

A top view of the frame. I decided to go actually crazy and design the frame for injection molding, in case… I dunno, thousands of Colsonbots.

I added hoods and lids for the electronics bays next.

Same goes for the underside.

Notice how the drive motors hang out a little. The gearboxes are still gripped by the clamping plates on the bottom, so they should be well supported still, but I needed the ground clearance or else Colsonbot would be barely able to move.

Here’s how it looks inside the body of the 8×2 Colson.

At this point was when I actually got a chance to machine out the wheel and weigh it, and the results were not promising. This base weighs about 1.6 pounds. Trouble is, so did the wheel, and I had cored the plastic out as far as I thought was reasonable (leaving less than a 1/8″ thickness of the center web of the wheel. The result? Colsonbot needed to lose up to 3.5 ounces to make weight. Unless I made a mistake in material density and weight estimate for the base, it would mean drastic measures:

Like amputating a whole side of the bot, to relieve not only the weight of the 2nd motor, but also the frame materials!

I decided to instead hollow out the frame even further, lightening the volume surrounding the drive motors and removing some of the circular overhands. Now it’s looking even MORE like an injection molded machine part!

Populating only 1 of the spin motors (and consequently only 1 motor controller) should get me down to just under 3 pounds; any remainder was to be made up by sanding down the outer diameter of the wheel, to remove the rubber weight. 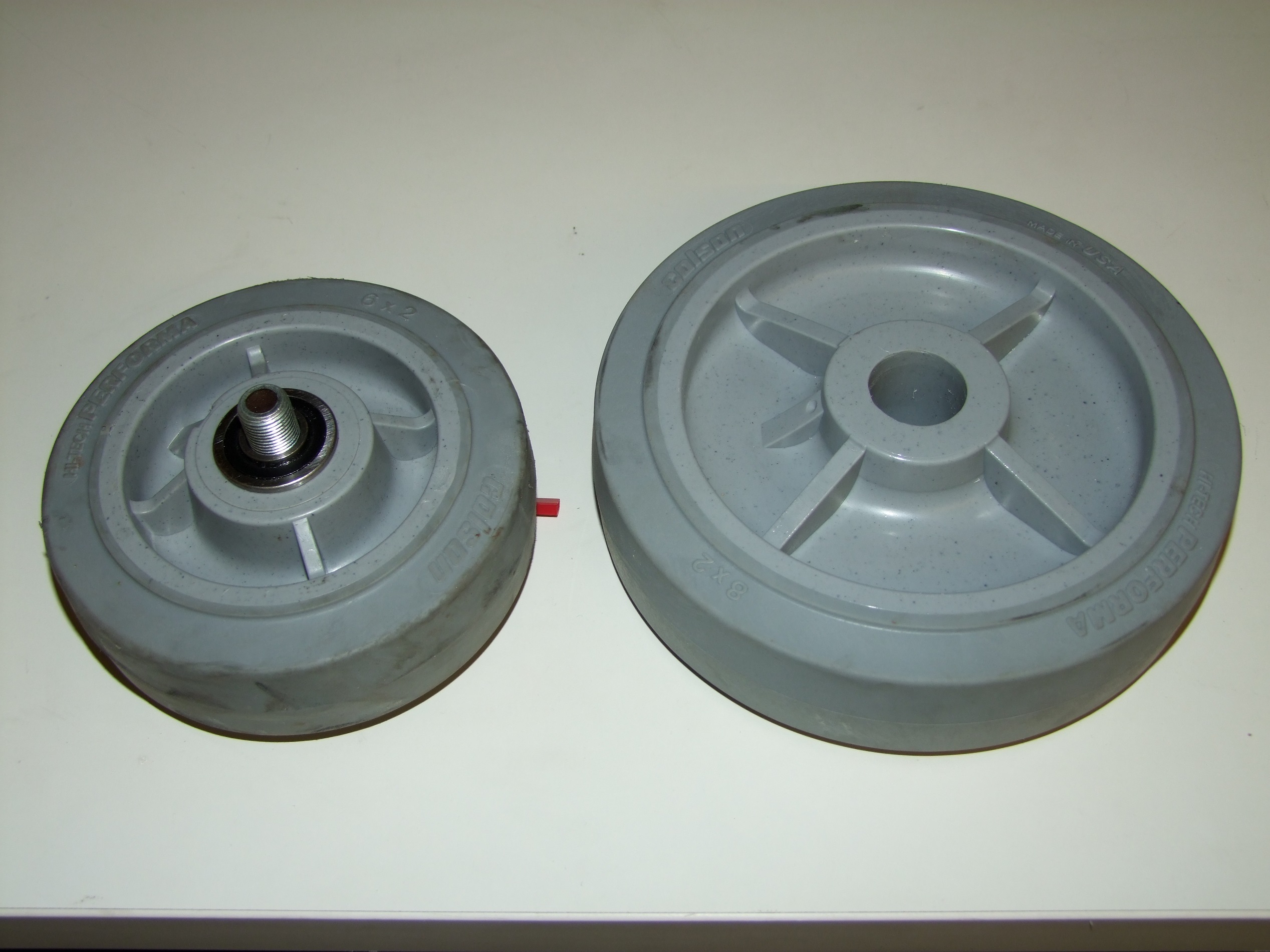 Here is the 8″ wheel, before machining, compared to the 6″ Colsonbot. 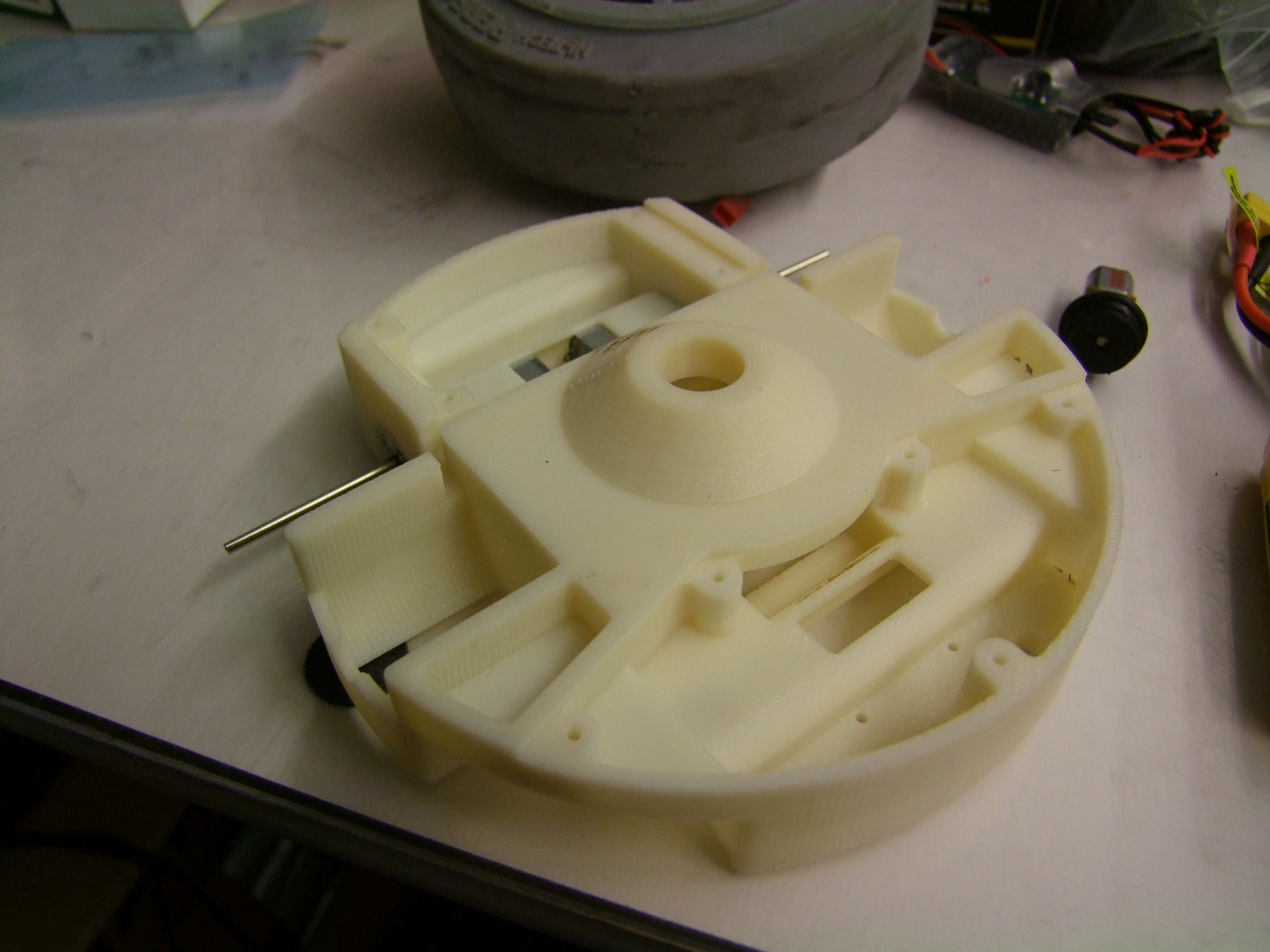 The frame fresh out of the 3D printer support removal pot, with 2 motors fitted for testing. This material is ABS plastic, a 3d printing staple. 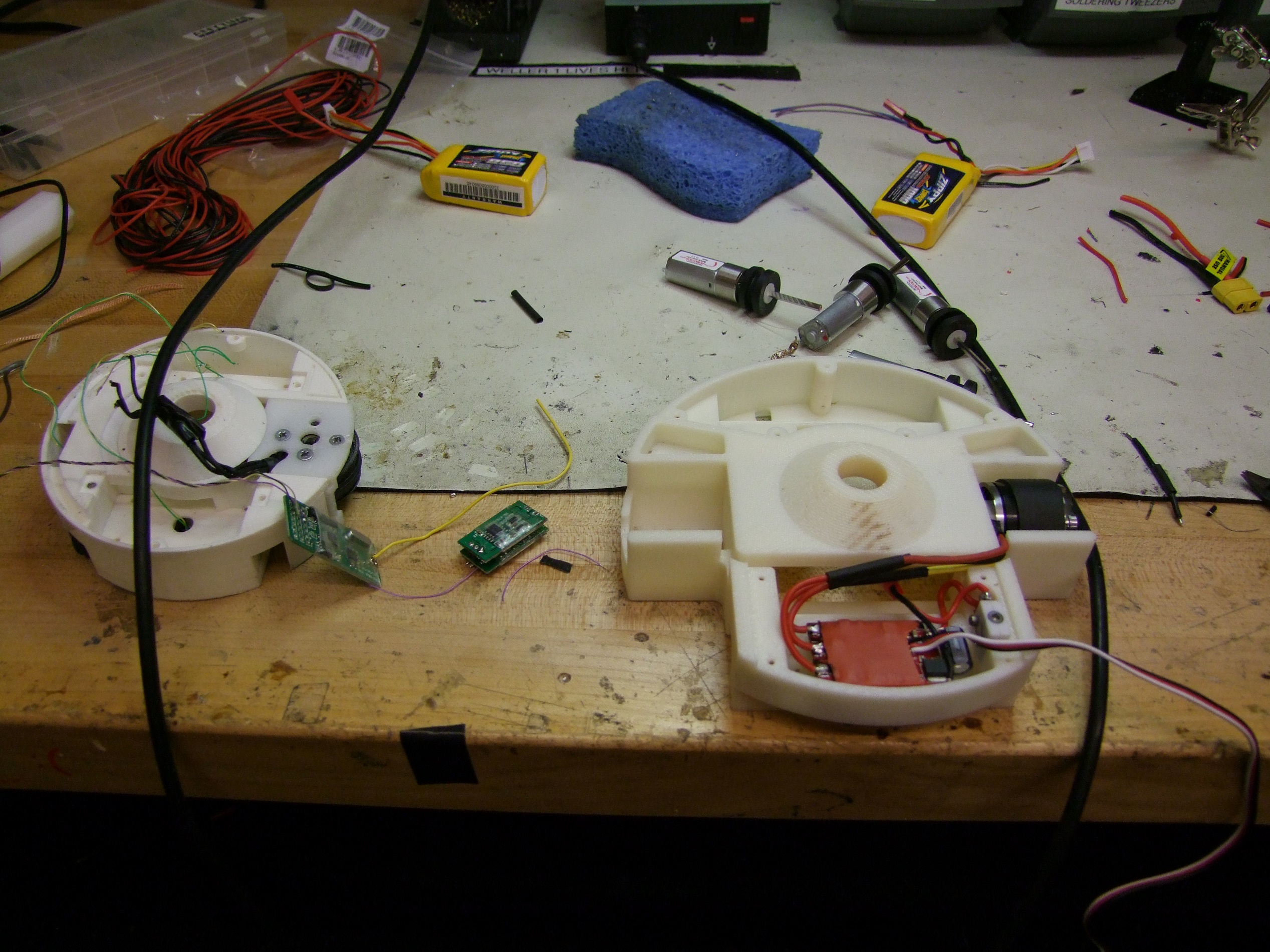 Transferring the goodies directly from old to new…. 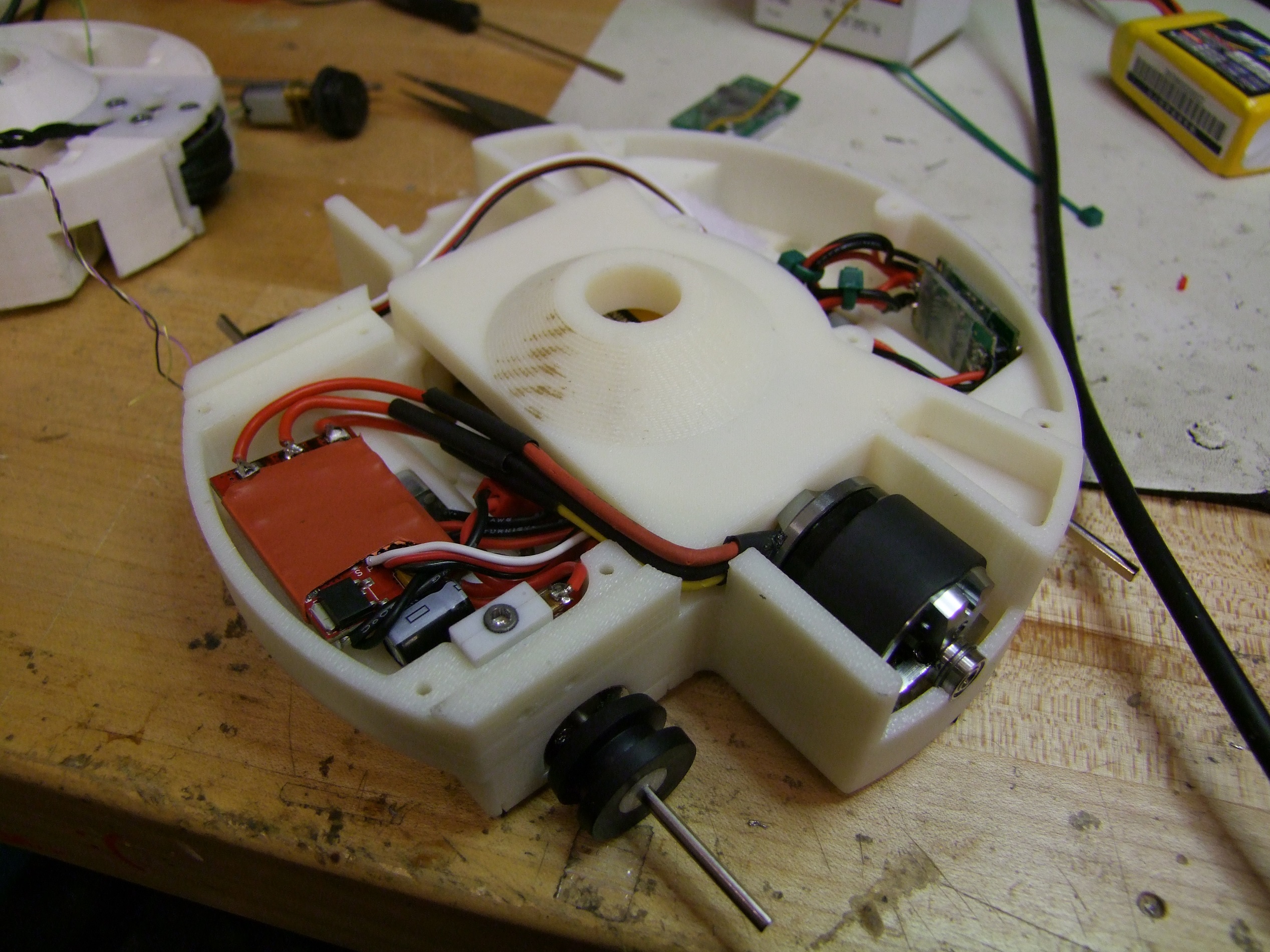 Most systems wired in now, after an evening’s work.

Those wheels are actually rubber wiring grommets, pressed onto 3D printed hubs. I was cleaning the shop of old student projects and research when I found a whole bag of them. I noted how grippy they were and how they were conveniently 3/4″ in diameter, which is what I needed for wheels. You may see them in other bots in the future…

Notice the spin motor’s outboard bearing, sitting in a little indentation on the right side. This is to ensure the motor doesn’t move or bend the mounting surface behind it once the wheel is tightened down. It’s a SMF83ZZ type miniature flanged bearing. 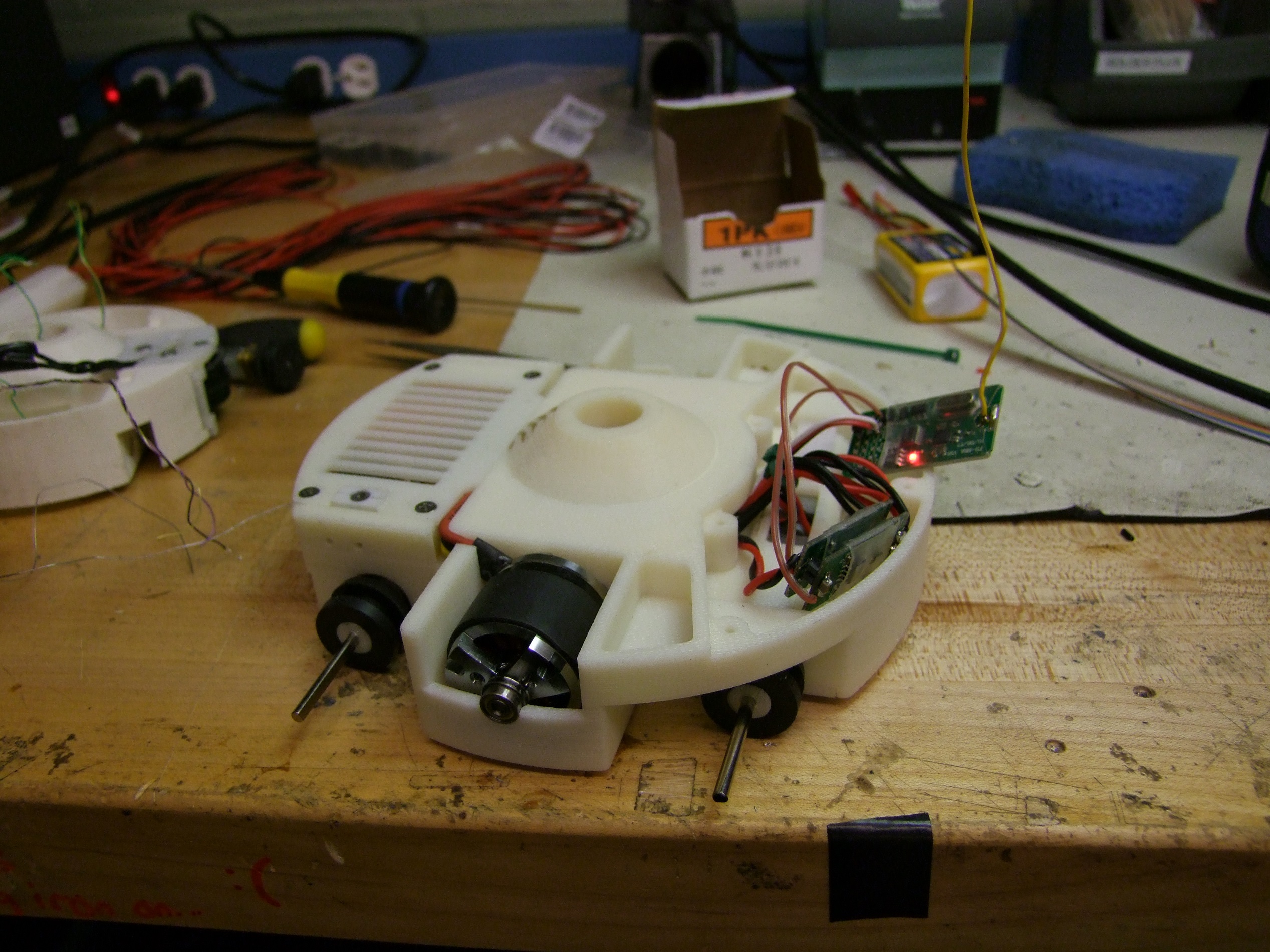 With the received wired in, now I’m testing directions and control channel orientations. Everything on my little bots is “hardwired” with no connectors simply due to lack of space. This means if I get it wrong on the first try, it’s a pain to change.

Well, I DID techncially get it “wrong”, but only to the point of the robot being “backwards”. Meaning what I had intended to be “front” – the righthand side here – was actually the rear of the bot.

That’s okay. It’s round. Nobody will know. 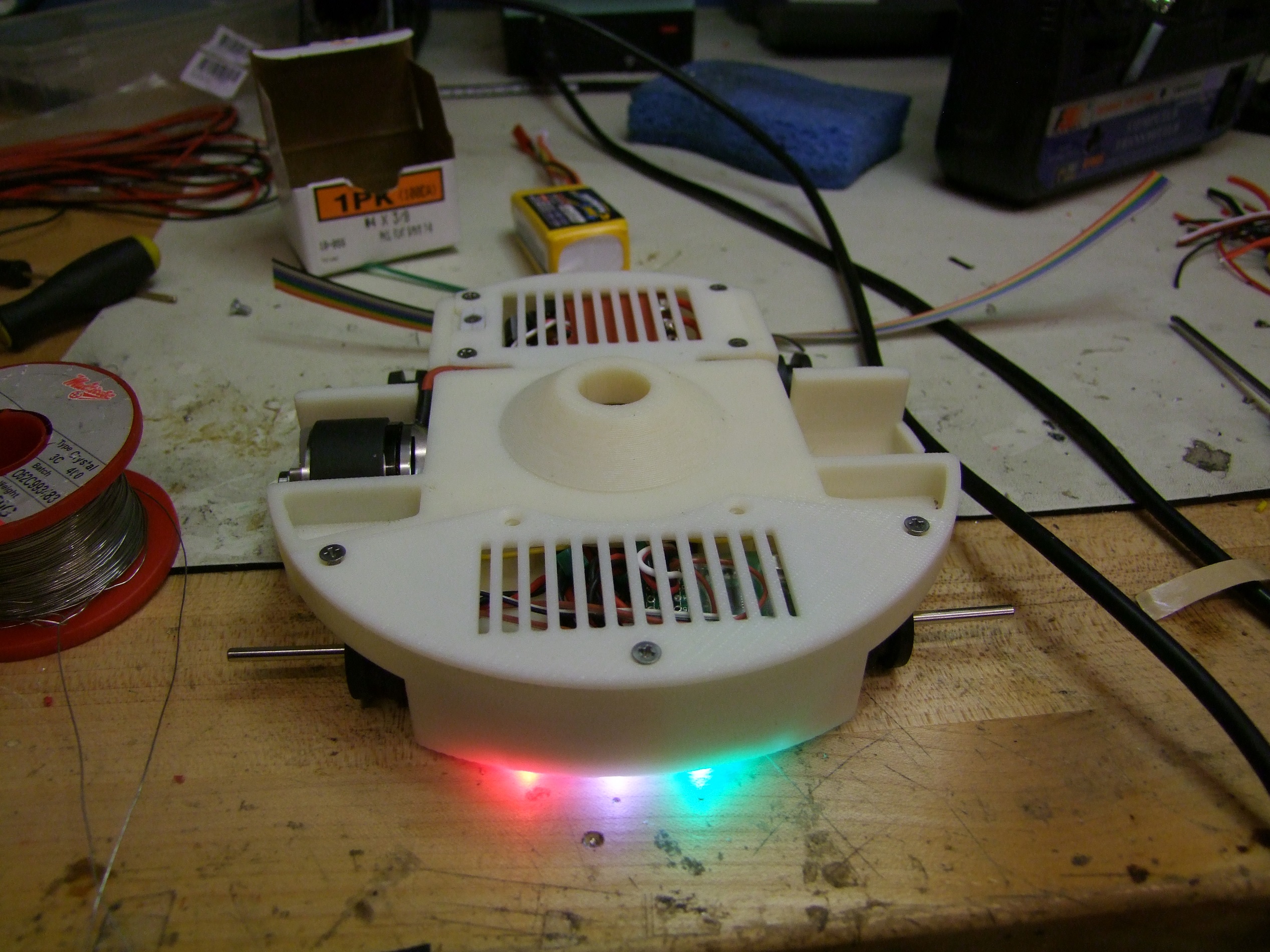 The small indentation on the underside  is to fit a small chunk of LED tape. I had the “bright idea” of replacing two of the LEDs with different colored ones – white and green – and making a kind of navigation light setup, but once the wheel was put on, you couldn’t really tell anyway. It adds to the Chaos Factor.. 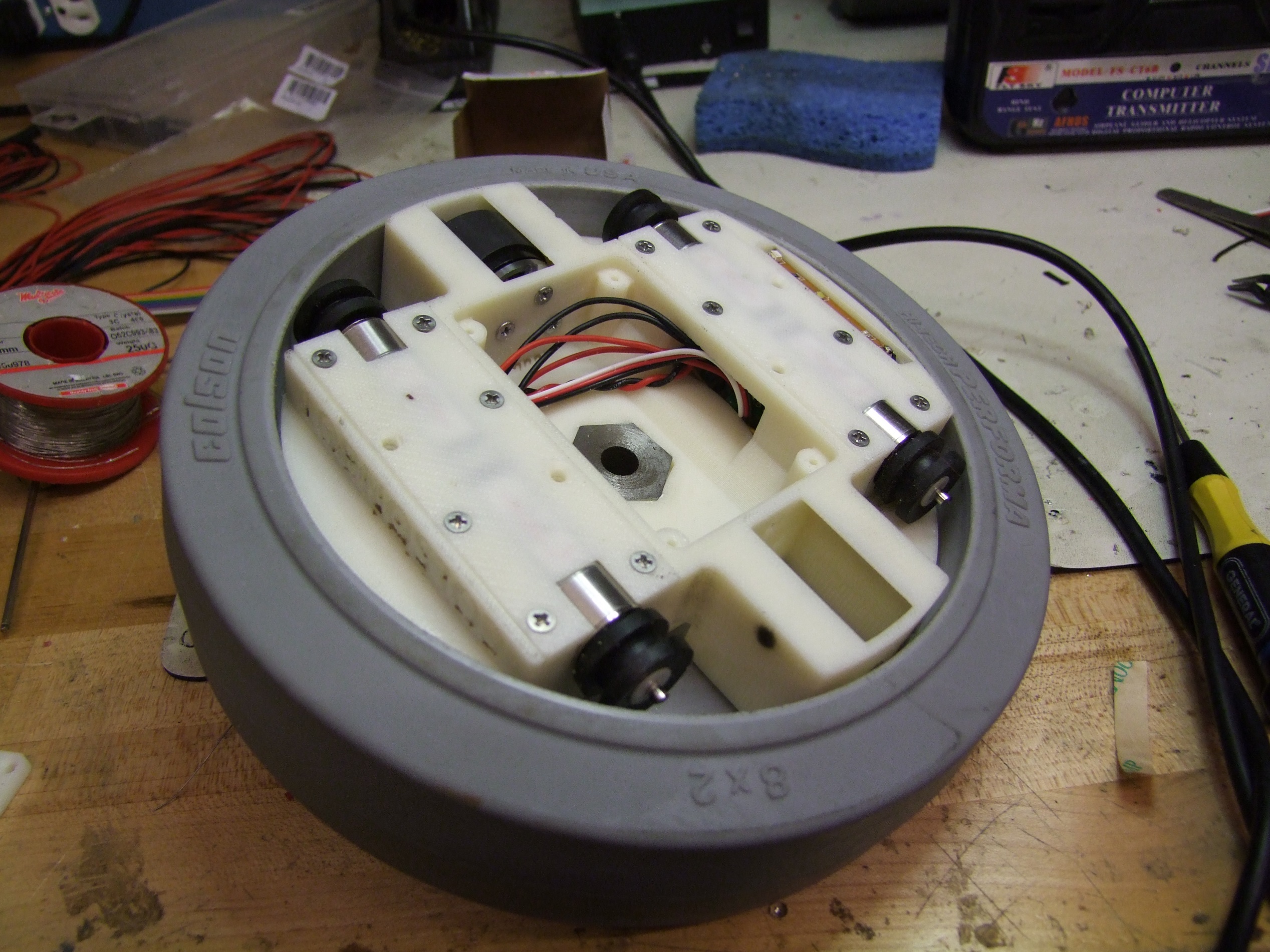 Once I had turned Colsonbot Italian with LEDs, it was time to close up the underside and put the wheel on. The very tight clearance shown between the drive wheels and the.. uhh, big wheel turned out to be problematic at Bot Blast. 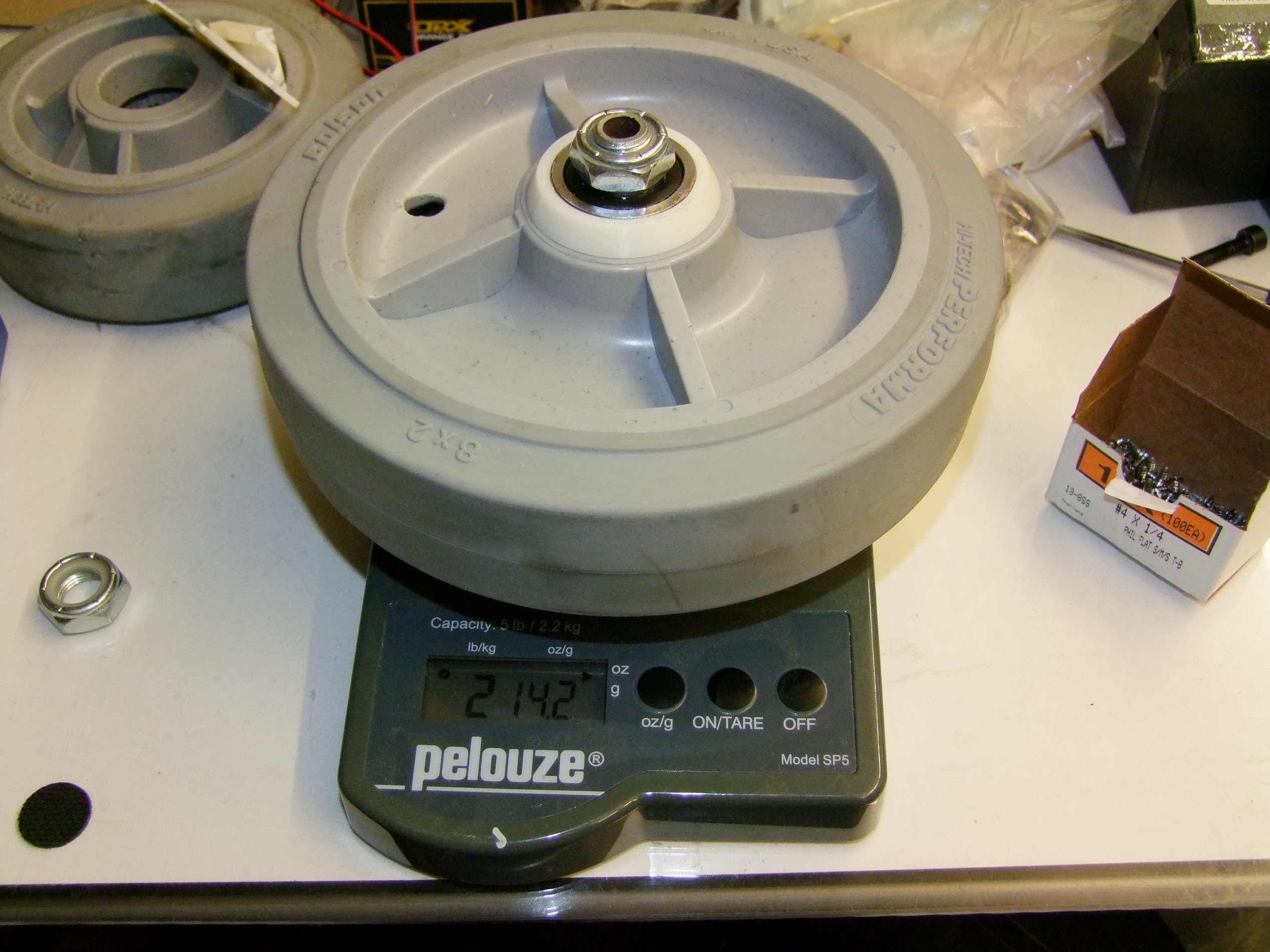 And a final weigh-in… Wow, I over-estimated the bot’s weight by 1.9 ounces. Since I physically weighed the post-machined Colson, I can only surmise that the wiring was lighter than anticipated or, more likely, Inventor’s weight data for ABS plastic might be over-estimating for 3d printed material which is not perfectly dense. 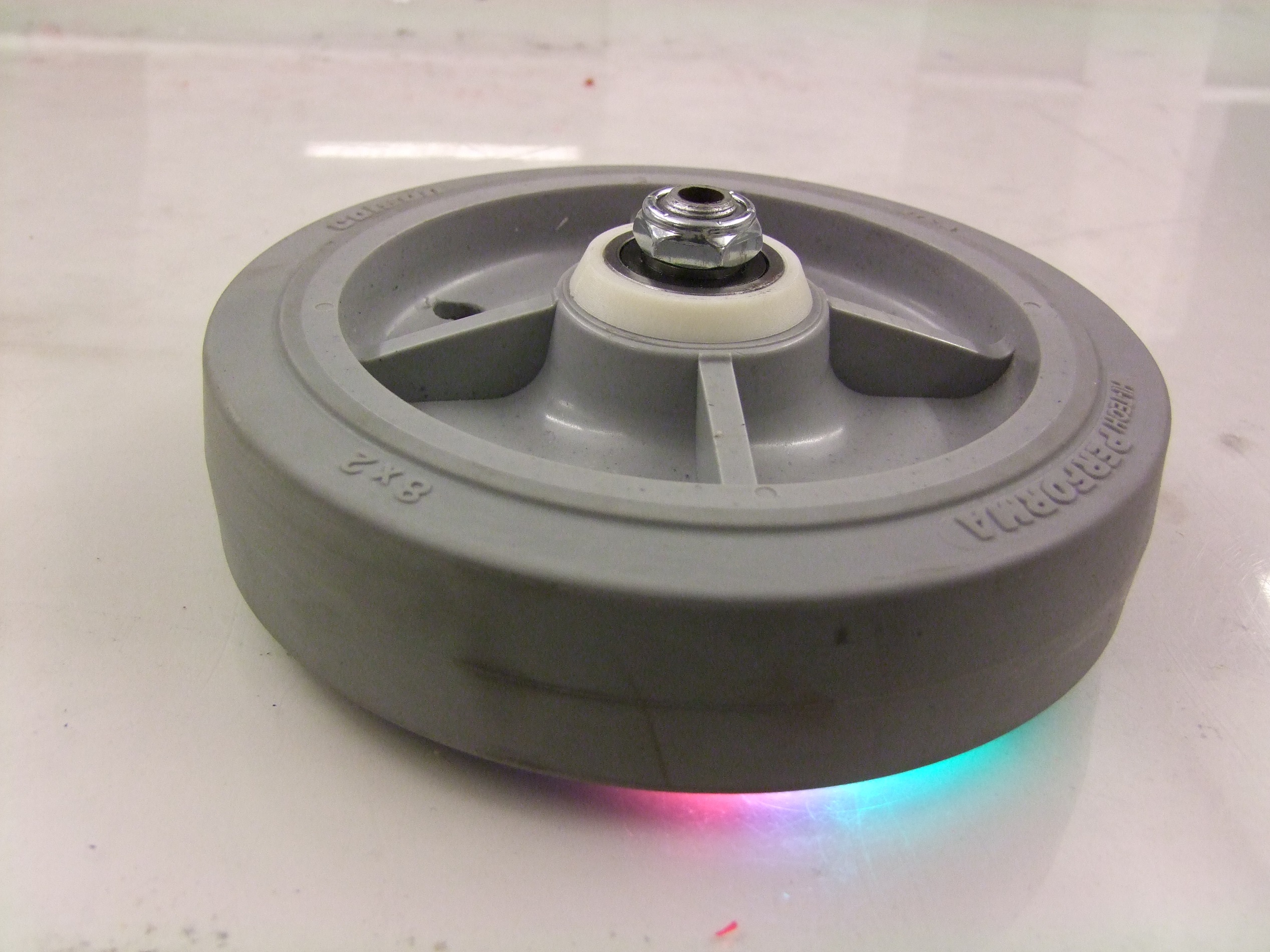 Here’s a “press photo” of the finished bot. 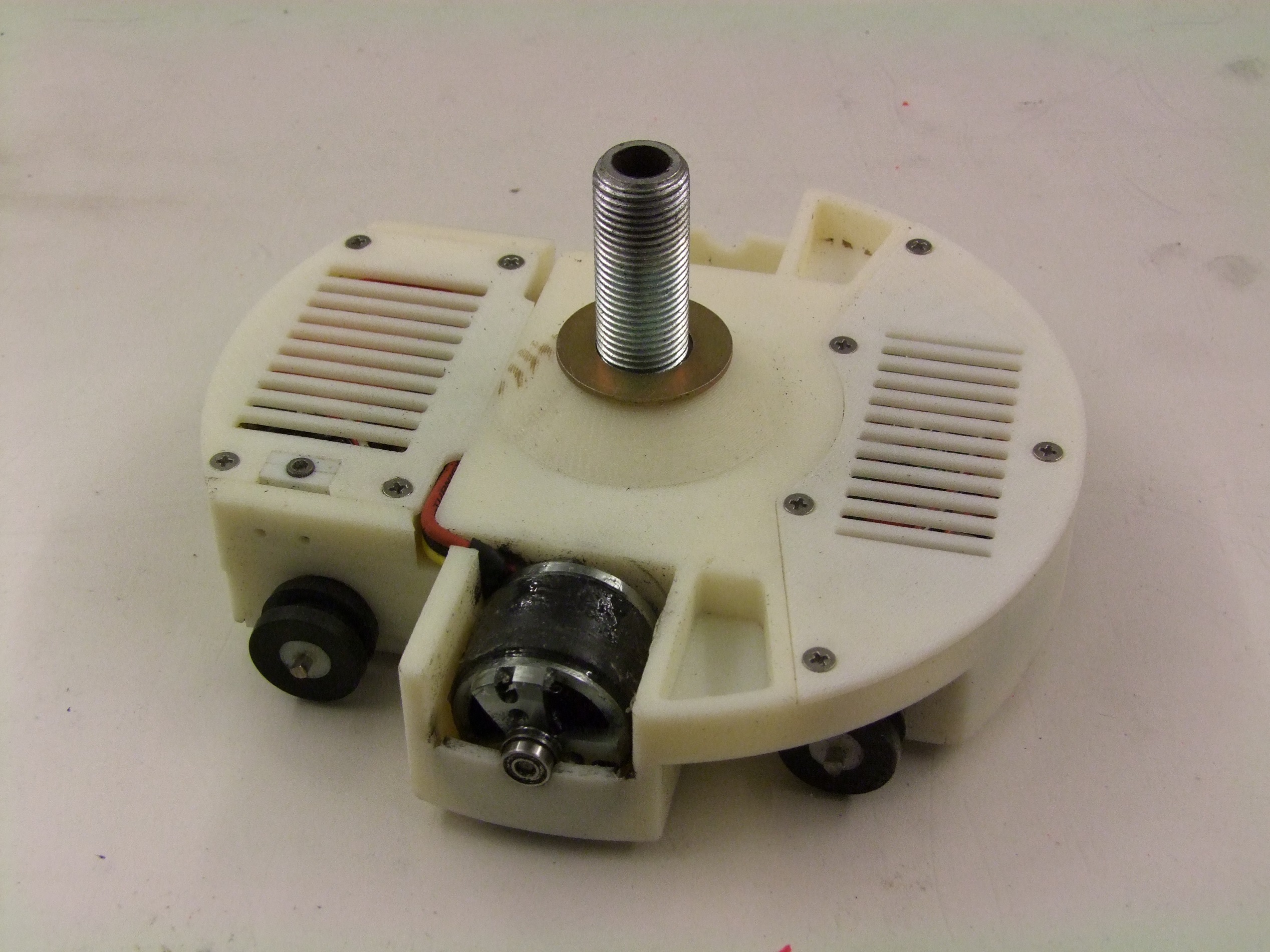 The completed drive base. It’s actually very quick and maneuverable due to the 4 wheel drive with 11:1 Spark motors.

Since I really didn’t use the space under the two wings of the larger electronics cavity, for further weight reduction I might remove those from the next revision so it looks more like the other end. This could free up enough weight for me to run two motors…

I didn’t have enough time to go to Bot Blast myself, due to the needs of the Singaporean Navy (more details on that soon!), so I handed Colsonbot off to Jamison, who proceeded to take Colsonbot through FIVE matches for an overall 3-2 record.

Wait, what? That’s like, better than pretty much all of my actual bots have done in competition the first time. And that means three people lost to Colsonbot. How on earth…

Well if you look at the tale of the tape…

Okay, I’m going to hell for that one.

Here is a playlist of Bot Blast matches. Colsonbot’s two losses were to a vertical drum type spinner where it got flipped over, and at the end, to a solid pusher bot. The wins were all by good driving – the quick drive base was essential, because let’s face it – the wheel isn’t capable of actually dealing damage, despite a few good traction-based connects.

The friction wheel on the weapon motor ended up wearing out and coming apart, but besides that, Colsonbot took no repairworthy damage. It’s crazy well-armored and bouncy, which probably helped. I do intend to bring it to Dragon Con, perhaps with those new frame updates.

Up next! It’s almost Detroit Maker Faire. What’s Chibi-Mikuvan up to?