LBS is another great example of something I built without much forethought that never quite worked, similar to a certain basket-case go-kart. It has been plagued with reliability problems for its entire life, generally stemming from my inexplicable refusal to use real motor controllers (it’s always the motor controllers) and my insistence on keeping it brushless with R/C type motors. While its initial goals were… somewhat noble, they were pretty much antithesis to what it needed to do in real life, which was to have very high low end torque and fine speed control for scrubbing the tracks during steering, and to push through dirt and snow. To no surprise, the completely open-air electronics deck was not very enthusiastic about doing either of the latter, and the fact that it had always been geared for 20-25mph meant it really didn’t have enough torque to do anything save for drive in a straight line.

Scheduled Plug! I’m still trying to unload stuff. Have a look and see if anything interests you.

The first drivetrain version used rewound C8085-class “melon” motors, hence giving its internal moniker “melon-tank”. Unfortunately as I found out later, the motors were both wound incorrectly and Hall-sensor-appended incorrectly. Hence, this version pretty much never worked at all.  In fact, the most successful rendition of LBS had been its brief DC motor form that I put together afterwards, but even that didn’t resolve the turning issue because of the lack of braking/reversing that the “Beast-it-trollers” featured. So it still couldn’t turn, and one somewhat undergeared CIM motor per side ultimately meant they just overheated and baked. When last winter rolled around, I switched LBS back to a chain-reduced brushless form using (proper) sensored motors. This version has been around the longest and has been consistently working….with the exception that it keeps eating the Hobbyking Car ESCs for reasons unknown. Given that these were never meant to drive something with so much inertia and friction, and don’t have any form of current limiting or control, I am not at all surprised. The motors are also still geared too fast – a top speed of about 18 miles per hour, and I don’t think I have ever stayed on this thing past about 10. After the very mild winter snows melted, I took some parts out of it to let other people borrow for their own projects, and LBS has been living under a table.

Now, with LBS approaching its third Brutal Arctic Winter, it’s time I do something about all of that or close this chapter of my project book forever.

And because I was told that it will actually snow this winter, and with the allure of having a functional offroad/snow vehicle still too strong, it should be clear what path I’m taking!

I’m going to rebuild LBS the way it was meant to be the first time around – bone simple, no frills. It’s going to just be about as smart as one of the Battlebots. Full R/C throttle controls and no more weird sleep-mode contactor closing and opening. One of the causes of my reliability concerns stemmed from the fact that this thing just had too many subsystems being thrown together haphazardly at once.

Here’s the summary of what’s changing:

The design has been in on-and-off development for a few weeks now, so most of it’s done already, but I was waiting to make sure I actually started on it before making a vaporware post. Here’s the rundown: 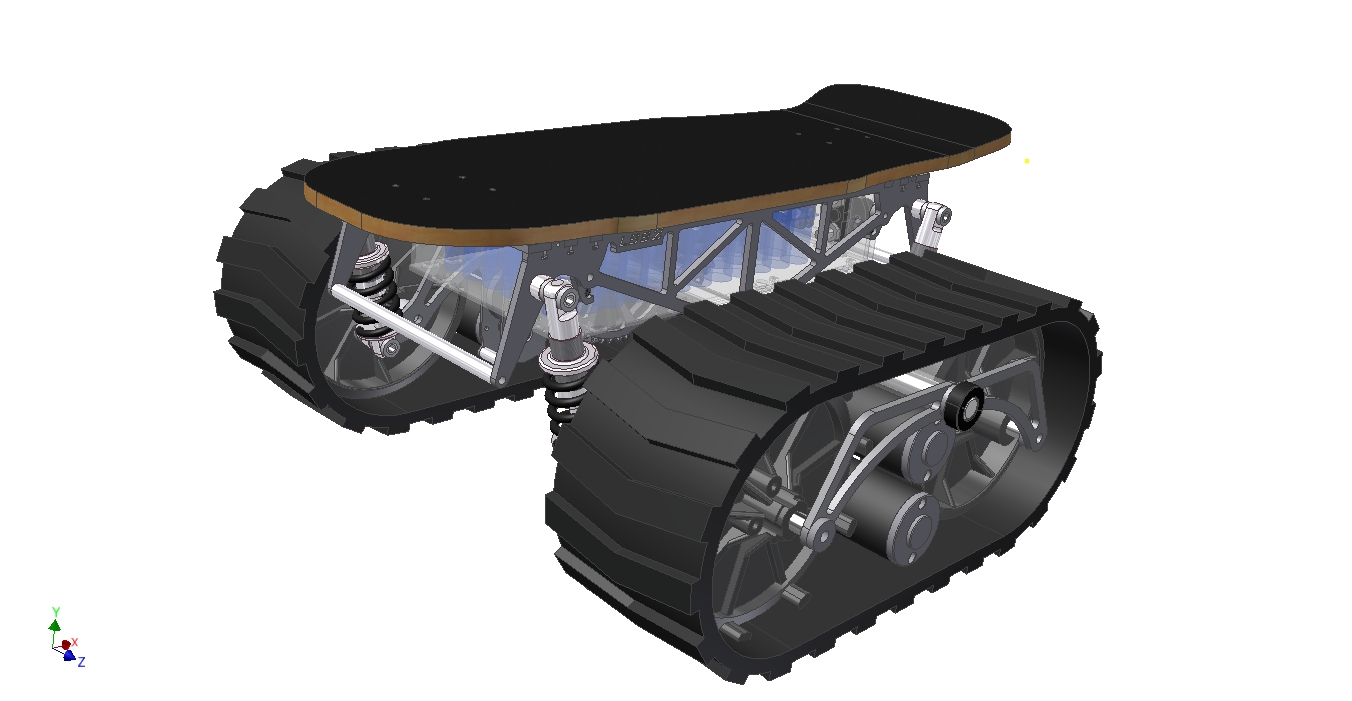 This is what the design looks like as a whole. Notice the much, much lighter aluminum sections and my more extensive use of trussing and triangles instead of big square plates. The aluminum weight on this frame has gone down by about 60% – because previous, every piece was solid aluminum plates!

The new track bogies are also much lighter in weight. Fact is, these things never took any structural loading, so they were entirely for show. There’s no suspension element or frame mounting that is rigidly coupled to the bogie swingarms. As a result, they were made much thinner and simpler. The side which couples to the ‘shocks’ are thicker in section because the loads are transmitted into the shocks and into the main body.

Admittedly, the suspension does absolutely nothing. The mountain bike suspension shock absorbers I got are rated at 700 pounds per inch – in other words, there’s basically no travel or movement at all with 4 of them on there, even if I jump up and down. Hence, I really just think of them as rigid control links in the bogies and not actual suspension elements. They are there to anchor the track axles, closing the structural triangle between themselves, the bogie swingarm, and the central frame. 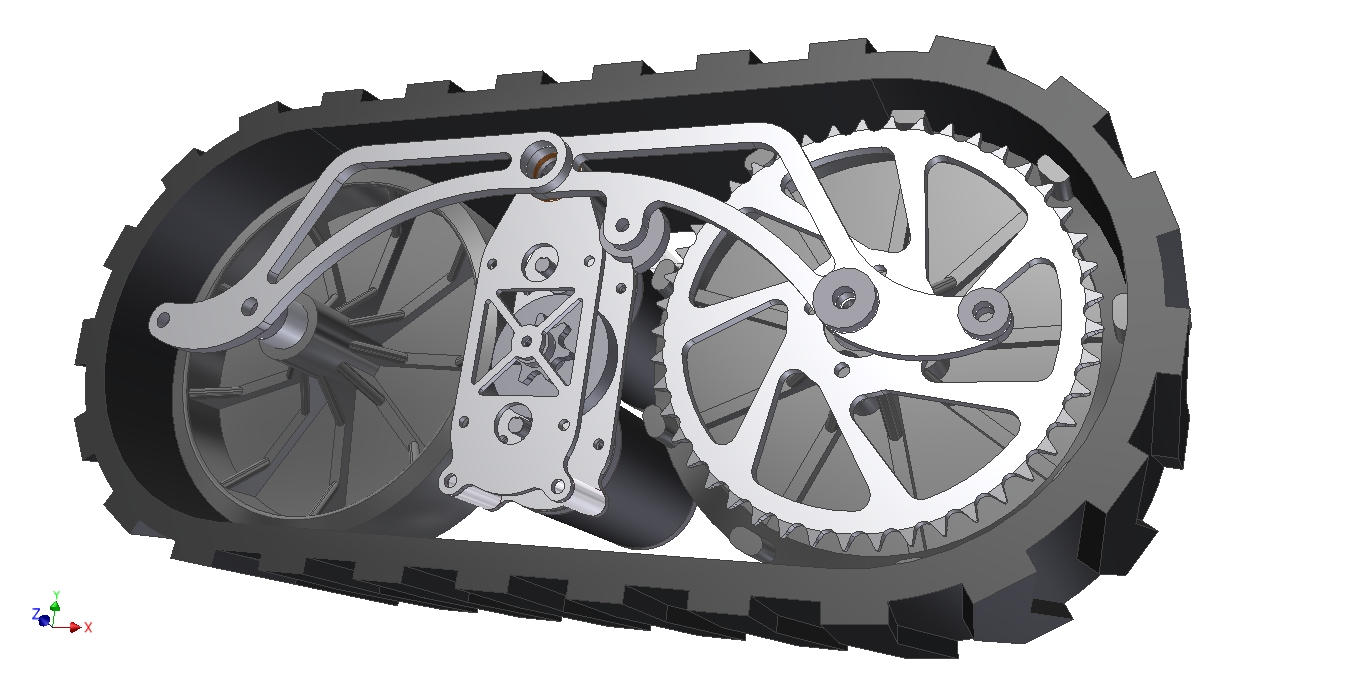 The track pods were totally designed from scratch to be lighter and more elegant, and to minimize the use of 1/4″ aluminum. There’s no more ring of 7 3/8 bolts around the outside of each axle mount, because they were completely useless.

I spent much time trying to play “arrange the motors”, since I wanted to fit 2 motors per side. The track pods were originally designed for an ‘inboard’ drive, or motors mounted away from them driving via a shaft.  Stuffing them into the center cavity between the very short wheelbase tracks along with a method of connecting them to the main body was a bit of a pain, and part of the reason I’m glad this thing doesn’t actually have suspension travel is because if it did, the motors would be bottomed out against the tracks.

I went through several configurations and motor-vs-center-shaft arrangements before setting on this one which kept both motors on one side, hanging off the center shaft in an independent gearbox. The high center shaft meant I didn’t have to use so much metal to join the shaft to the frame since the whole thing can be kept low profile. And, the one-pivot-point mounting meant that keeping tension on the chain would be much easier. The little snail cam thing is designed to keep pressure on that swinging assembly once the chain is installed.

Check out the new drive motor setup – dual CIM motors geared to a common shaft, then chain speed-reduced to the track sprockets. 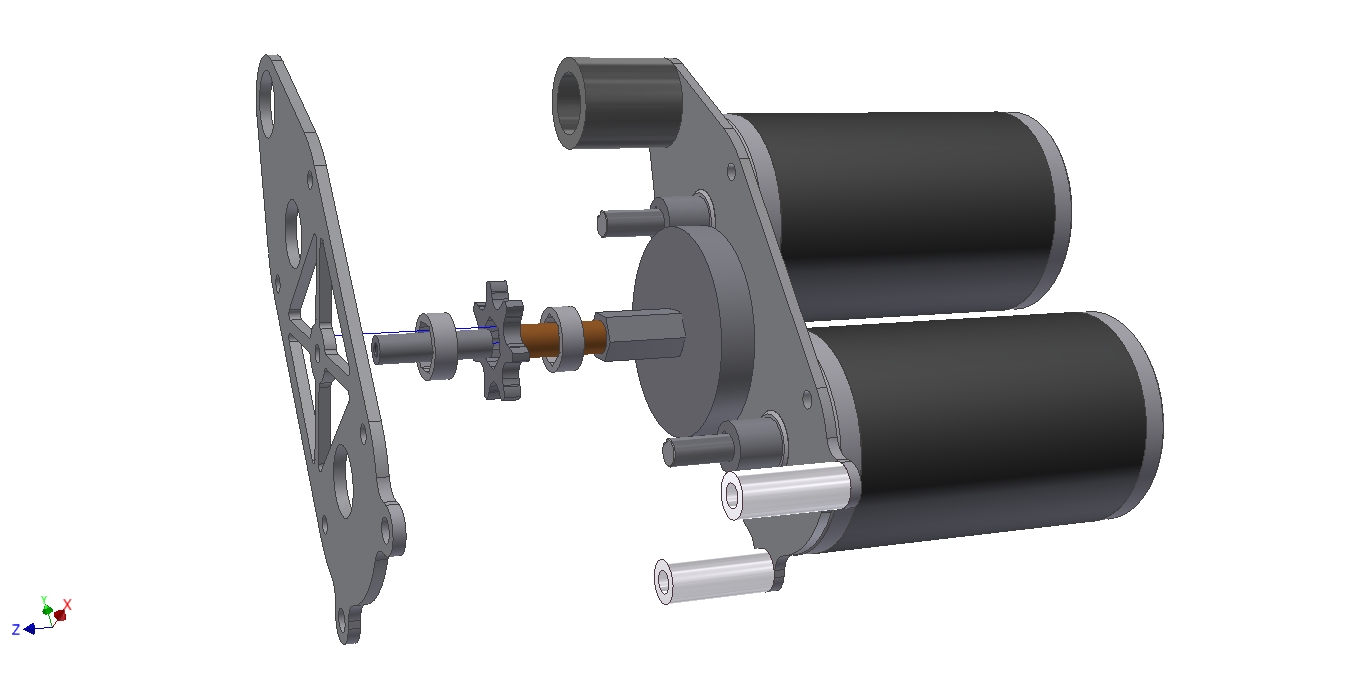 This thing will need a little explanation. The featureless gray circles are spur gears – for simplicity’s sake, I usually don’t bother modeling the teeth unless I was going to cut those gears out myself. The main spur gear is a hex bore, riding on a 1/2″ hex shaft with bushings inside so it spins on a structural standoff that helps hold the gear case together. A bunch of other hex bore objects are stacked onto the same hex shaft, and the assembly doesn’t have any axial constraining features (snap rings, set screws, shaft collars) save for the 2 end plates and thrust washers. The assembly is hence pretty easy to take apart and put together, and the hex bore transmits torque without the need for a keyway or something.

The spur gears are sourced from AndyMark. In fact, this whole damn thing is pretty much an AndyMark-powered FIRST robot. As much as I some times disagree with the philosophy of providing commercial solutions for a high school competition that allegedly encourages students to engineer and design their own robots, AndyMark really does make some neat little shortcut items. AM products are also usually built for the task at hand – which is to say, not things that you need to run for 10,000 hours with absolutely reliability. Robotics competitions are generally fast and brutal, not necessitating long part life, and I do agree with saving a ton of money making gearbox cases from aluminum sheet metal stampings, for instance, over die-case/billet machined stuff.

This means stuff costs less. Seriously, AM is about the cheapest place you can possibly get steel and aluminum spur gears if you don’t mind the limited tooth options. McMaster would have charged me about $30-40 per gear for the set I’m using, and they come with things like hubs that I don’t need. I’m pirating the popular AM method of using hex shafts for everything because it really is convenient. It’s like a real spline shaft, except improv.

In this gearbox, I’m using their 12 tooth pinion for the CIMple Box and a 48 tooth output gear.

The output is a 7 tooth hex-bore sprocket which I will custom-cut from profile. 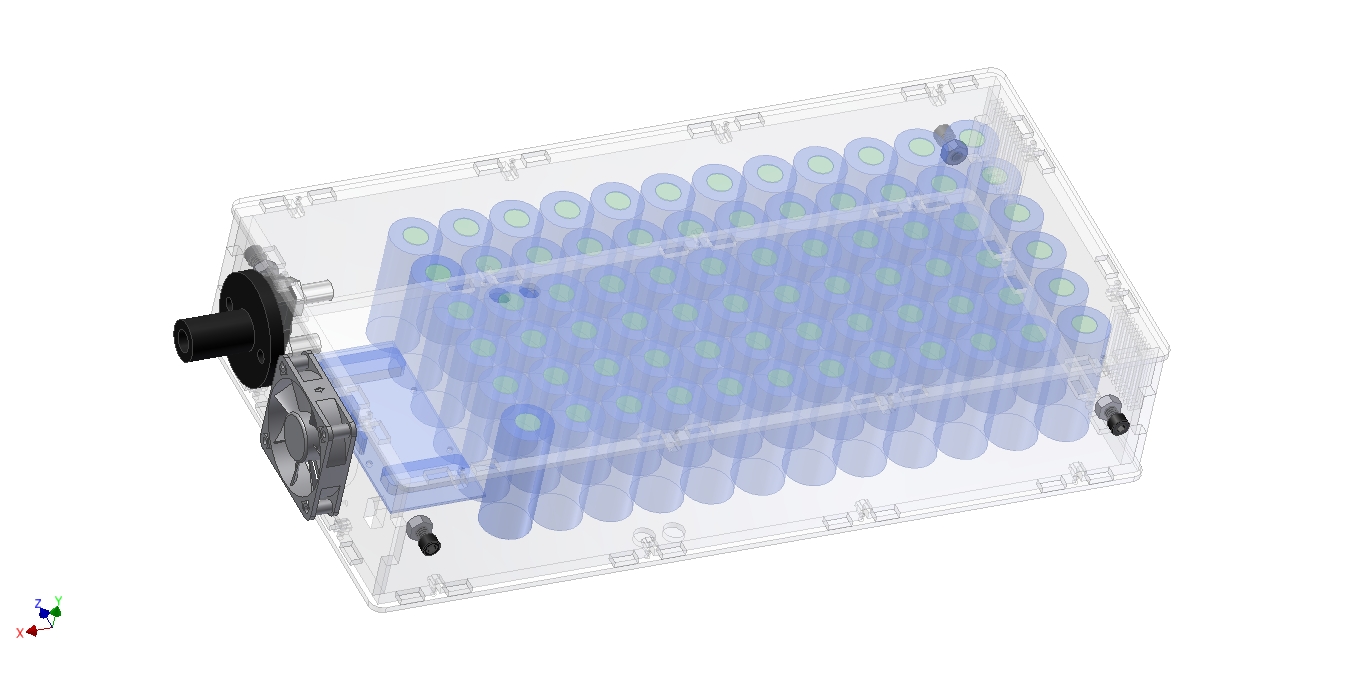 The electronics box this time is no longer an open-top bucket. Made of 1/8″ and 1/4″ polycarb, it’s fully enclosed on all 6 sides, save for ports for switches and wiring. A fan will blow straight into the two Ragebridges in the back to keep them nice and chilled. The fan will have a foam filter stage in front of it so it doesn’t try to pull in water, and the RB boards will be conformal-coated too for splash protection. The fan will also help keep the electrical box positively pressurized -exhaust vents out the front, so if there is any place gunk could get in it would be through the slits if there was no airflow.

The Big Switch makes a return in the back side, so if this thing does try to get away from me, I wouldn’t have to full-frontal tackle it. At the breakneck speed of 8mph, too, it should be easy to catch. 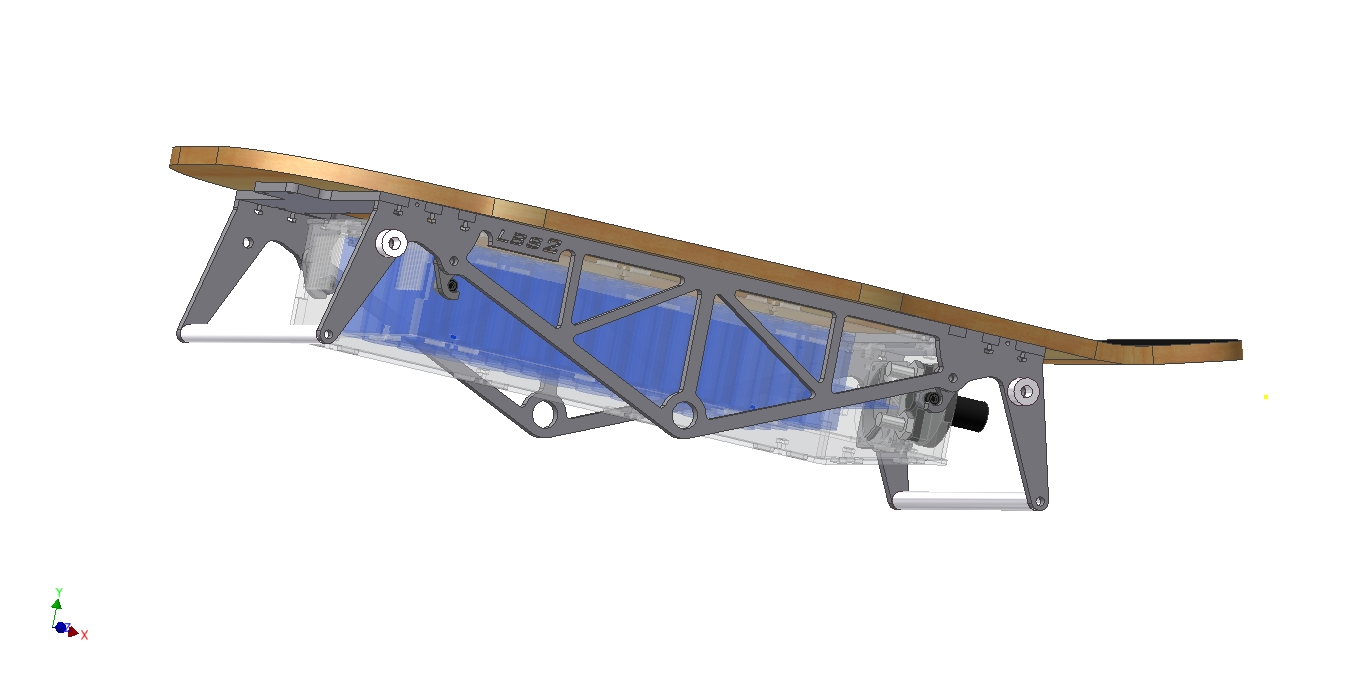 The main chassis this time is pretty much just a cage with mounting holes that mount the track pods and hang onto the electronics deck, which can be slid into place and locked by the side mounting screws. Exceedingly simple compared to the first time around. I’ve ditched the big crash bar because there’s no more load cells involved, and that thing alone weighs like 10 pounds. The board itself has some little side rails on the bottom so it won’t sit truly flush as shown – I’ll make a little spacing plate if it’s needed.

Overall, the thing loses about 15 pounds compared to what it has been. While I never weighed it with the crashbar assembly on, the bare vehicle weight before was 65 pounds, so it must have been up to 75. What I lost in metal weight and complexities, I gained back some in those damn CIM motors and gearboxes. Steel and DC is heavy!

I do like the new look better, though. The space frame makes it look even more monster truck-y. Here’s to hoping it can actually live up to the hype this time. 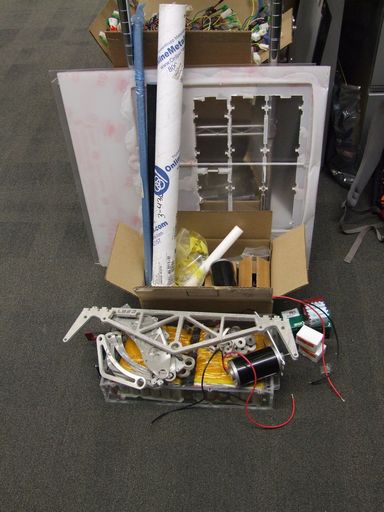 And here’s the pile of parts!

2 thoughts on “The Second Great Awakening of the LandBearShark”