I’m starting to run out of things to work on to put off the software, which would require a substantial rewrite in order to change the signalling protocol over to R/C servo style PWM to accomodate the Hobbyking cartrollers. In the end it will be simpler, but still…. software. That’s only things that closet electronics engineers do. Otherwise, I’m taking so long on this that my load cells are probably going to arrive before I wire everything back up, but perhaps that’s just me subconsciously pulling towards trying to get that version working and skipping this steering-sense-only stopgap solusion. What I’ve also discovered to my potential dismay is that the HK cartrollers will just explode as soon as I actually get on the thing, so maybe I should start making room for the Kelly controllers again, or have another solution on hand… 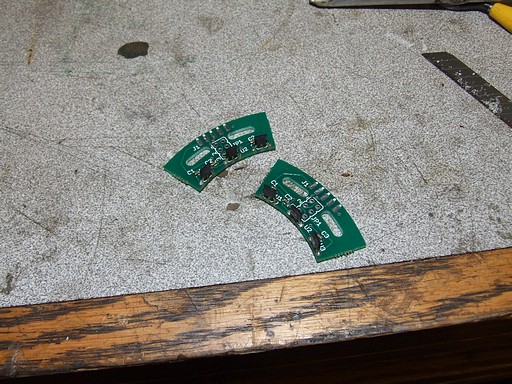 Speaking of closet EEs, check out these sensor holder boards by Shane. I’ve been meaning to make a clean, permanent mounting solution for my Hall sensors for a while, but just Never Got Around To It.  These are external mounts – they face inwards into the can, and the slots make for adjustable timing (also addressed in that post, and an interesting read for anyone else wondering why their motor doesn’t reverse).

Normally, I’m a fan of the internal slot-mounted sensor. For the SK motors, though, I would have had to mount them outside the motor because the slots are too narrow, so I got to test drive these mounts first. 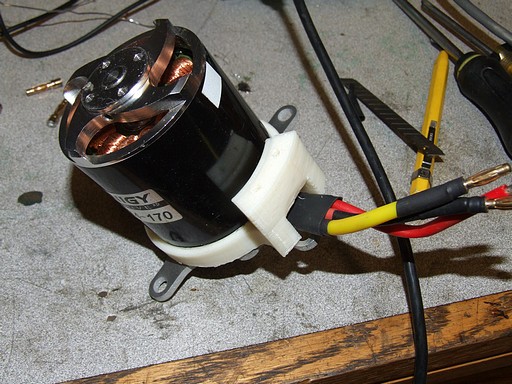 Boards are nice, but that still doesn’t change the fact that the motor mounts I built have no provisions for attaching the boards. That’s fine, I’ll 3d print a little mounting ring thing.

Originally designed with 3 notches to fit the sensors by themselves (without a Nice Board), this mounting ring is aligned by the conical portion of the motor face, and protrudes very slightly past the end of it. This means when I tighten down the motor mounting screws, the ring is firmly secured by a taper fit. The whole thing is actually capable of rotating for sensor timing – with the sensor board’s mounting slots, it’s a bit redundant. A notch in one end lets the motor wiring through, and the two holes in the top face secure the sensor board.

Make-a-Bot is now on its last meter of ABS filament. Uh oh… 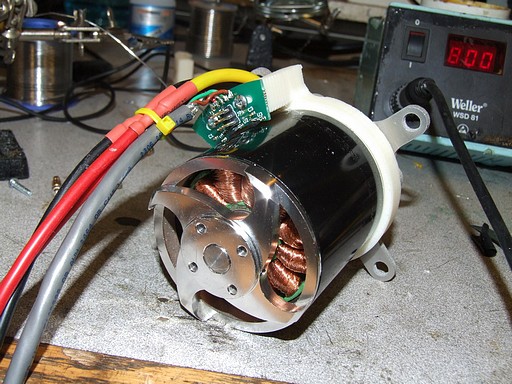 Sensor board attached and wired. I found some Nice 5-pin Cable that had a tension strand and braided shield. It’s a bit large and overkill for the task, but hey, 5 pin cable.

On the other end of the cable, I spliced in a standard R/C car motor sensor cable (ROAR 8.8.1.3 standard) I picked up with a Hobbyking order. 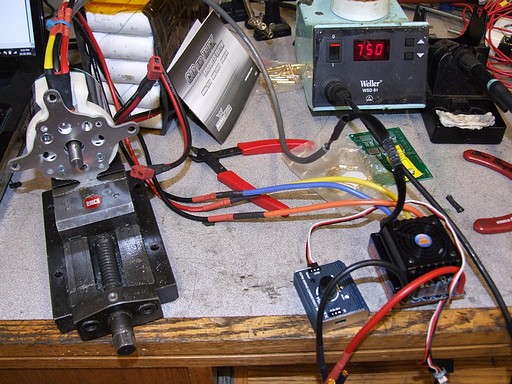 The next step was to test the motors. Because I don’t know if the sensors are actually in the right position or not, this was a game of applying gentle throttle to see if the motor would spin smoothly. For a fixed sensor input combination, there are 6 motor wire combinations to try, 2 of which work. 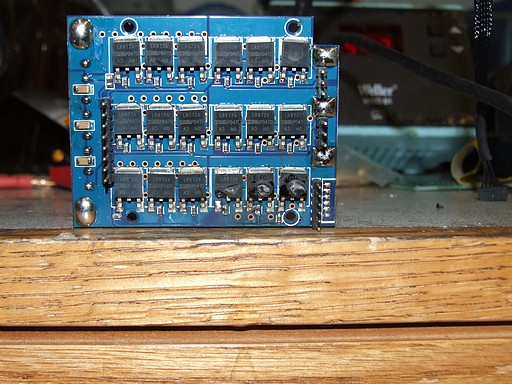 I probably shouldn’t have tried to sensor-find on the full 22 volts. The SK motors have an internal resistance of like 30 milliohms, which means at 20-something volts, infinity amps tries to flow. If the sensor to phase relation isn’t correct, then the controller tries to flow infinity amps vibrating the motor around. The result is a literal popping sound as one leg of the power board detonates.

Luckily, I have a spare HK cartroller (the one that I took apart and beat up), but the fact that these exploded without even running the vehicle proper yet probably means it’s not going to end well. The motors are simply too low-resistance for a non-current-controller driver of this size to handle well.

After this, I decided that sensor finding on 11.1v might be better. 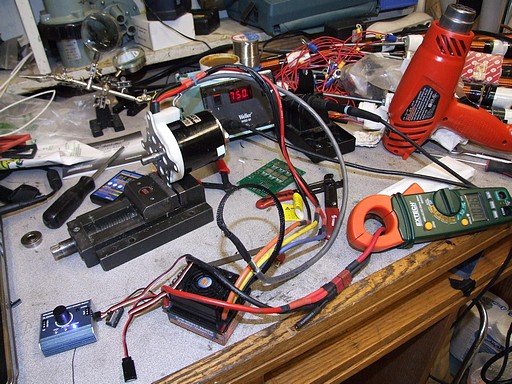 With the sensor-phase combo “found”, I timed the motors by measuring the DC current draw while rotationally adjusting the sensor mount. The point of optimal timing in one direction is represented by minimum current draw.

As Shane found out, optimally timing the motor for one direction using sensors like this does not mean they will be good for reverse at all. Due to a combination of factors such as sensor hysteresis, motor magnet field leakage, sensing distance, etc. the timing in reverse will be very far off – as much as an entire sensor state.

This means LBS will be able to reverse using the HK cartrollers, but very rudimentarily and only with extremely high current draw due to the non-optimal timing. This probably just translates into more death for the cartrollers.

Once the Band of Optimal Timing was located, the sensor mounts were fixed in place by tightening the motor mounting screws. 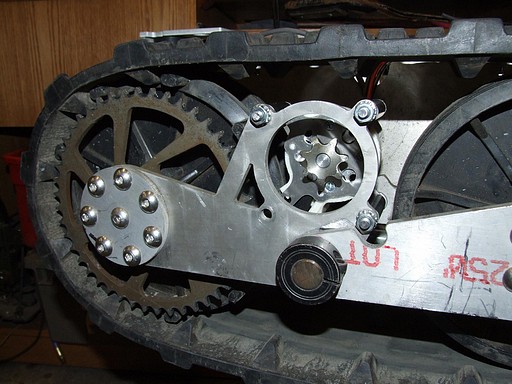 After wrapping the whole package up and potting the sensors to make them a little more waterproof, it was time to mount the motors.

Hey, that’s an awfully small sprocket isn’t it? I didn’t know that they made things such as 6 and 7 tooth drive sprockets until I actually looked. The SK motors have a much higher torque constant than the CIM motors of yore, so I could bypass the CIMULINK reduction and just increase the single stage chain drive ratio by using a smaller sprocket. The motors have a RPMs-per-volt rating of 200 or thereabouts, so with a 7 tooth sprocket, resulting in a 6.4:1 ratio, the speed is approximate the same as the CIMs using the pre-reduction and 4.5:1 chain drive (about 18:1) 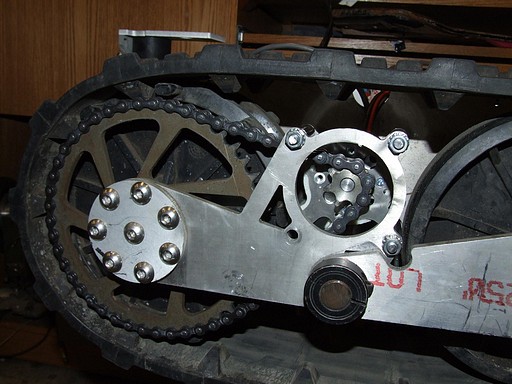 With the 7 tooth sprocket, the chain turned out to be essentially the correct length after I added a “halflink”, or one full pitch. There’s a small amount of slop, but it’s better than before, so I decided to not use a tensioner. 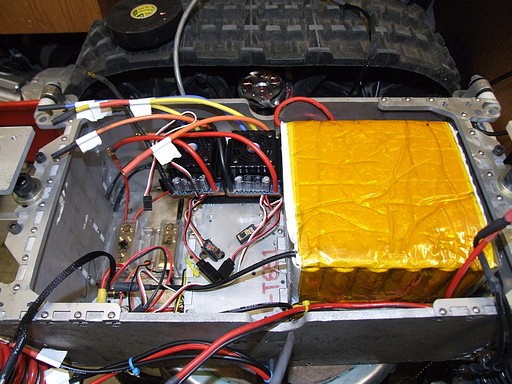 I verified that the motors were in fact still working after wrestling them into the track pods. After that, it was time to throw everything else back in. The batteries are in a different orientation this time – sitting flat instead of vertically side by side, and they have polycarbonate plates holding them from being jostled. Previously they were free to bounce around inside the cavity, which I can’t imagine was very good for them.

The next step is to Put The Arduino Back In and make some R/C based driving code – and detonate the cartrollers.

3 thoughts on “Land-Bear-Shark: I’m getting closer to blowing it up again”