This is the post where I take those CAD renderings from before and manifest them physically. I was able to assemble the entire new hinge today and test out the ride. Conclusion? A little soft, but the sandwich mounts I purchased were also the softest type on McMaster (50A durometer). Upgrading to the hardest type (70A) should make the board much stiffer. However, it behaves as expected, and the “pot wrench” coupling also works well. 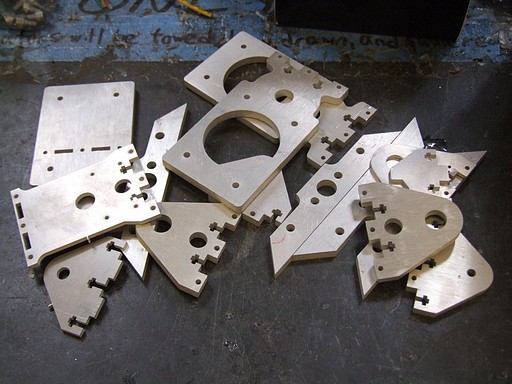 I feel a little shameful for making yet another post where there is an instantaneous transition between CAD rendering and parts. High-school-me would have figured out how to make this new hinge solely from Home Depot aluminum angle and UHMW stock from McMaster-Carr, and early-college-years-me would have made long detailed posts filled with pictures of machining and musing about machine tool design.  So you guys over at Georgia Tech should post more pictures of your own waterjet pimping such that I feel less guilty :(

For people not in bed with the hydraulic intensifier, there’s places like Big Blue Saw which you should totally check out. That’s my promise: Every time I make a new build post involving waterjetted parts, I will spam Simon all over it.

The parts above are cut from my giant eBay haul of 1/4″ aluminum plate, the same one that Straight RazEr was made from.  The potentiometer mount is 1/8″ and was cut from scrap plate. 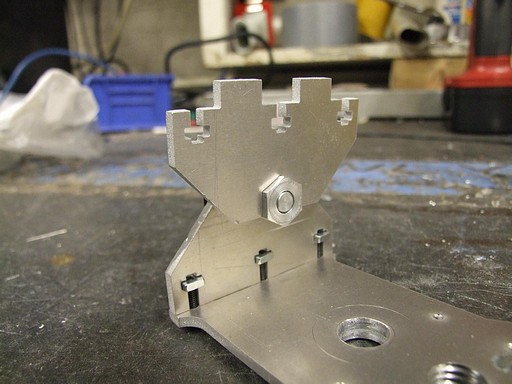 Alright, enough guilt tripping. This is the “pot wrench” in real life. The bottom piece is two stacked 1/8″ plates that are pre-assembled with 4-40 tapped holes. Then, treating the resulting piece as solid, I threaded one of the large mounting holes 1/2″-13. 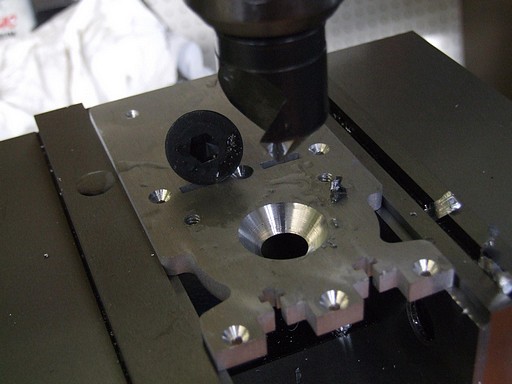 Because the top of the hinge is also the skateboard mount, all of the screws had to be countersunk. This was a problem: the massive 1/2″-13 flathead cap screw I ordered to secure the sandwich mounts needed a countersink that was 7/8″ across. Luckily, the Edge shop had a 1″ 82 degree countersink.

I later found out they make countersinks over 3″ diameter. What the hell are you countersinking that’s that large? Container ships? 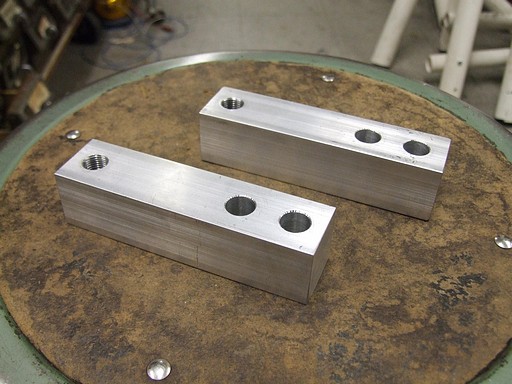 Because the load cells (Keli Electric SQBY 500lb type, as it turns out) haven’t arrived yet, nor am I in the mood to diddle with them, I made these temporary mock load cells with the same outer dimensions out of aluminum bar. They will provide the bridging connection between the hinge and the rest of the frame. The holes are tapped and cleared for 1/2″-13 screws. 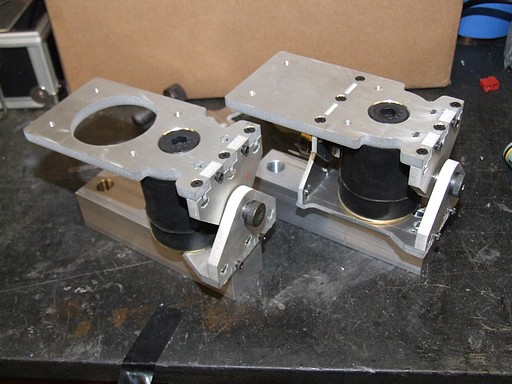 Here’s the front and rear hinge assemblies put together. The large shoulder screws solidly define the axis of pivot. 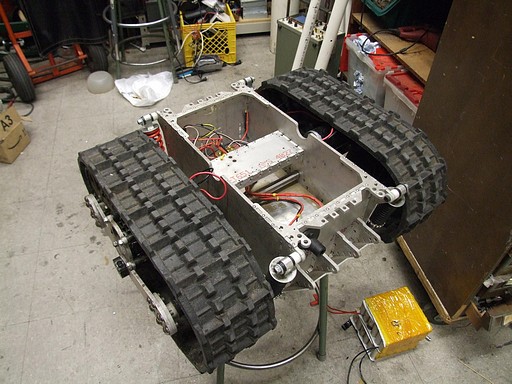 After the hinges were asssembled, I officially committed to the rebuild.

I tore out everything – all the electronics, and the batteries, and most non-fixed wiring. I blew out the interior (which was very much filled with dirt thrown around by the tracks) and cleaned up all the surfaces. The old hinges have also been removed.

One downside of the redesign is that I will lose my “dead rider switch” until the load cells come in and I can read them. So I’ll be keeping the throttle manually controlled for now – since I only need one channel in this case (assuming I can Do It Right) with the steering potentiometer, I might take advantage of the XBee socket on the 2.007 Standard Issue Arduino Carrier and make a simpler wireless link akin to the RazErBlades controller. That, in itself, would be pretty kickass. 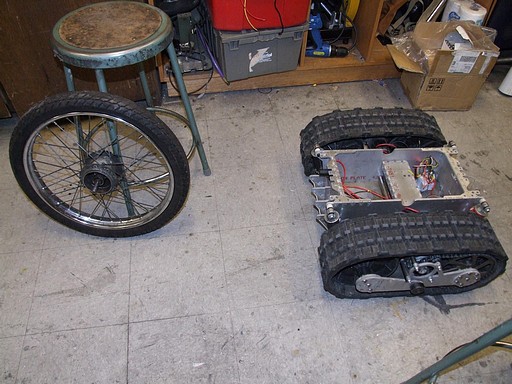 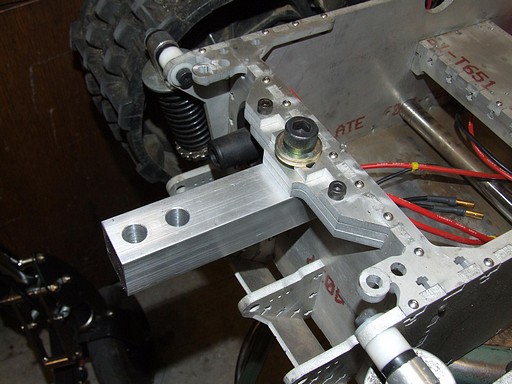 The fake load cells mount with a single Giant-Ass Cap Screw through the spacer plates and into the 1/2″-20 threaded hole. The spacer plates are individually retained by 1/4″-20 screws – the middle plate is a clearance hole and the bottom is threaded. 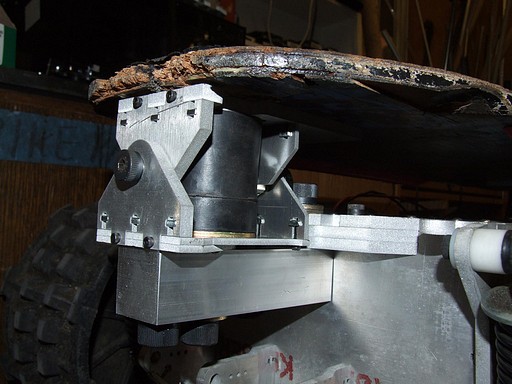 The hinge assembly drops on, and is secured from the bottom by two 1/2″-13 cap screws. The longer one (with the spacing washer) anchors the sandwich mount through the soon-to-be-real load cell. The other is threaded into the aluminum plate beneath it and stops flush with the top surface. Really only the former is needed, but I figured it was better for consistency. 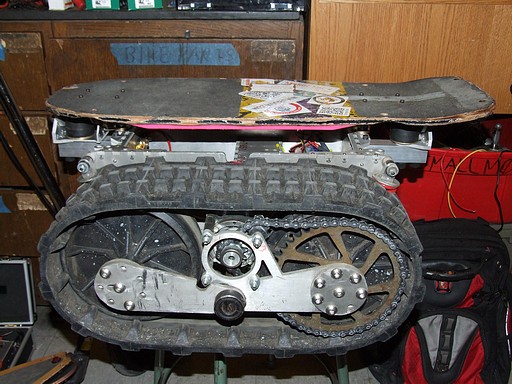 Profile view of the new hinges. I guess they don’t stick out that much – not from this perspective. I will still make front and rear bumper-like structures to prevent banging the load cells into something first.

Jump testing on this assembly revealed that it is a little soft. There is much more travel available and there’s not a “hard stop” all of a sudden, so it mimics the ride of a rather softly-tuned longboard. The potentiometer mount works as designed, and after alot of jumping in the center of the board, the pot itself was not damaged.

Here’s a quick video showing a wiggle test of the new hinge assembly. 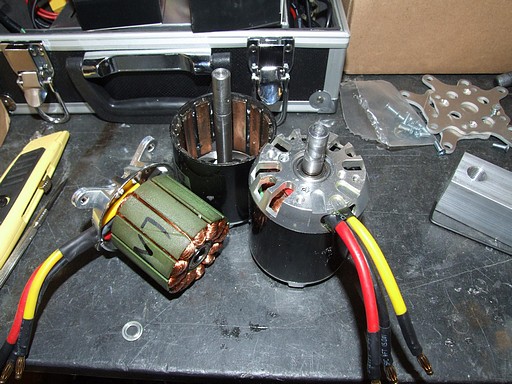 With the gory part of the hinge installation complete, I moved onto preparing the new motors.

More properly, they are new old motors. These Turnigy SK 6374/200 motors are tinyKart’s current drive motors, but the abuse of a vehicle’s shocks and jolts coupled with the fact that these motors do not have the “can bearing” of newer designs means that they’re kind of beat to shit.  On one of them, the stator was completely loose and could be easily slipped off by hand. The other suffered from an axial misalignment of the can that caused it to grind on the stationary faceplate.

I cleaned out the stator bore and stator post of the first motor with some carburetor cleaner (which is like, death and AIDS dissolved in cancer), then reattached the stator with copious amounts of thin CA glue. The mechanically gimpy second motor was just shimmed until it stopped grinding on itself.

While they had high speed resonance issues at 40 volts on tinyKart, they seem to be comfortable with 20 volts, even in their slightly dinged condition. 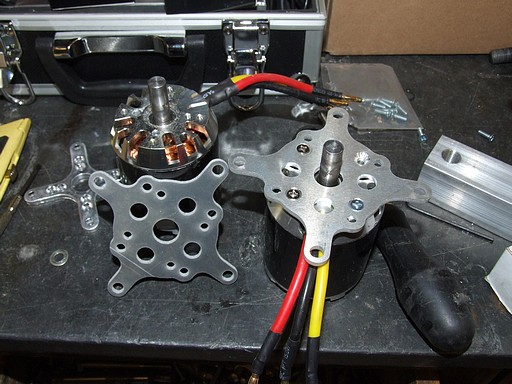 I made these motor mounts in conjunction with the rest of the parts. They have a semi-universal mounting pattern, fitting any of Hobbyking’s 63mm and 80mm motors. It means one day I can actually switch back to Real Melons, using the existing four mounting holes in the frame

What’s next? I need to actually perform the motor swap, but this might have to wait until I can figure out how to attach sensors to it. Unlike the 80mm motors, the stator tooth gaps on this motor are too narrow to jam a Hall-effect sensor in, unless the package was tiny. Therefore, despite the more iffy weather sealing ability, I will have to use externally-mounted sensors.

But it might be quite possible that sensorless is just fine…. I should try that.