Two weeks ago, I put together the CIMulink modules for my “trackboard” (as it has now been termed by a certain MIT professor). It then proceeded to sit under a table again for another week before I decided to blitz-finish everything so I could tool around on it come graduation day. As you might guess by the title, that didn’t quite go so well. But hey, when have I ever tried to build something involving a custom motor control solution and have it work on the first try?

The long story, spanning roughly the past week, follows: 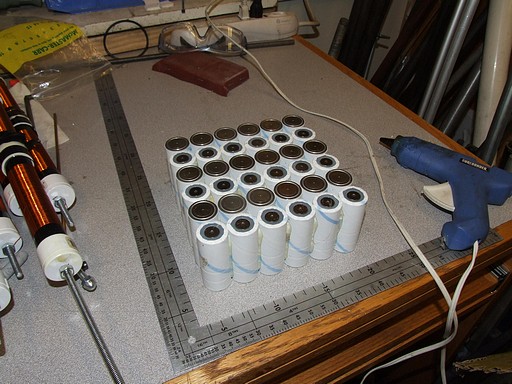 You can’t have an electric vehicle without batteries, so the first order of business was putting together a gigantic pack of DeWalt Drill Battery cells™. Originally, LBS was to run on a 12S pack for 38 volts nominal. However, the CIM motors are essentially 12 volt motors, and can be run up to 24 volts carefully. So I’m splitting the original 12S6P configuration into two 6S6P packs in parallel – or just 6S12P. This means it has something absurd like 26 amp-hours onboard, but the voltage is nominally 19 volts, a safe middle ground for the CIMs. 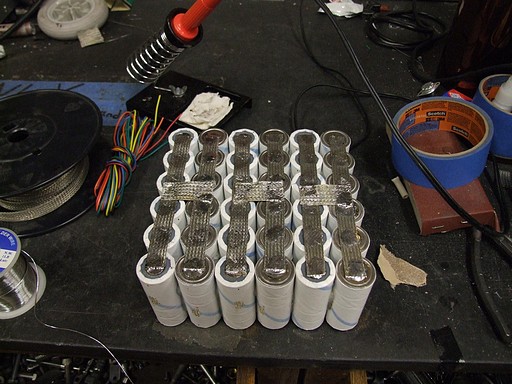 I used my usual tactic of Assnormous Busbraid & Ship-Soldering Iron with Gigasolder to make the connections between the cells. Soldering to Li cells directly is always looked down upon, but it’s possible if you’re fast and can dump heat quickly, so the soldering tip has to be massive and also well-tinned.

I added the cell taps and secured the top and bottom with sticky-back foam rubber, and then proceeded to Giant Kapton Tape the entire thing. I don’t have heat-shrink this large (do they even sell that stuff?) nor can I find a 55-gallon soda bottle, so GKT was the next best solution. The Giant Kapton was originally purchased as a build surface for Make-a-Bot, but it’s been more useful in this role. 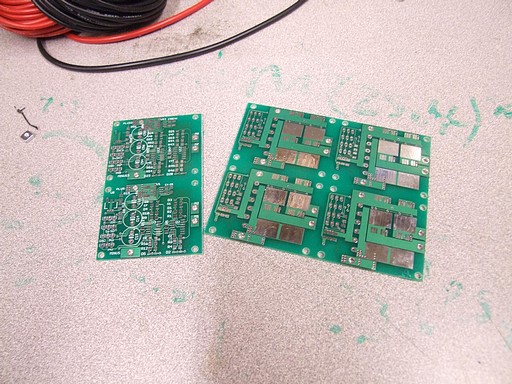 I received the first batch of Small Cute Full Bridges from MyroPCB like this past Wednesday. I tried Myro out as a vendor evaluation this time – usually, my source for pretty finished boards is Advanced Circuits. Basically what I learned from this is that I should use Myro if I need a whole pile of boards for something (since their prices are lower), but if I need it OH GOD RIGHT NOW, I’m going to stick with AC. The quality of the boards seems to be on par, and Myro does offer the option of different colors without extra charge, so maybe that’s a feature to keep in mind.

Because LBS needs two controllers, I just decided to split off two boards like chocolates from the panel of 6. 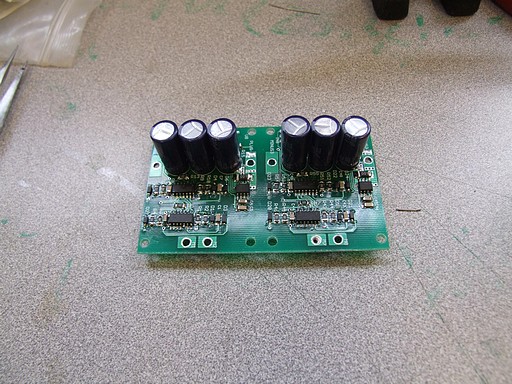 And here they are assembled! 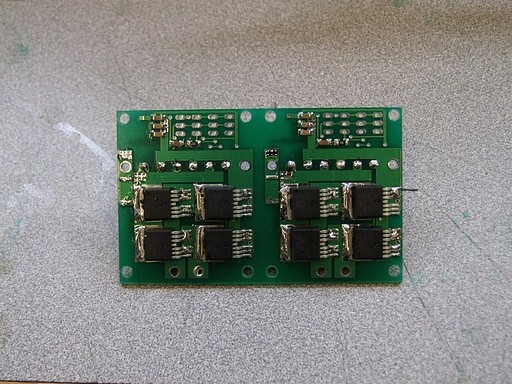 Here’s the underside. The switches are IRFS3004 low-voltage crackFETs from IR, the leading dealer of totally bitchin’ semiconductors. These things have the Rds-on of a chunk of copper. Seriously, what do you use them for in real life?

I’d have used my usual IRFS3107 parts, but because the electrical system of LBS is only going to be 20 volts anyway, there’s no point in using a 75 volt part. 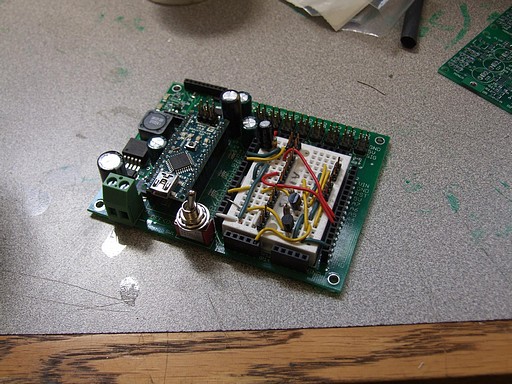 The core processing power of LBS comes from a 2.007 Arduino Nano Carrier. This board was designed for students in the class to run their robots with, and features a Gravitech Arduino Nano, 3 amps of 5 volt rail for servo driving, and convenient breakout pins for digital pins for servo connectors, and a socket for an XBEE radio. It also has a breadboard section, which I’ve exploited to the max here – I needed the analog inputs and PWM-capable pins that weren’t available on the headers.

The pair of 2N7000 tinyFETs on the bottom right are signal inverters that generate a locked-antiphase PWM between the two inputs of the SCFB. I decided to pursue locked-antiphase again, like I did on Segfault, because it enables the command variable to be continuous (i.e. less software for me to think about)…and because the Arduino just doesn’t have 4 independent PWM pins. Two additional headers supply the SCFB board with 5 volts and power the ACS714 current sensors.

And last but very important, the capacitor circuit next to the 4-pin header group at the top is an interface for the rider detect switches. 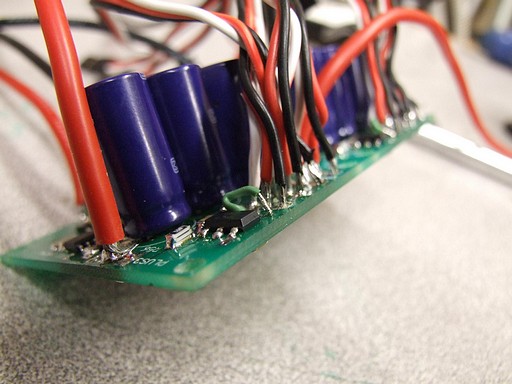 As usual with boards I blitz and then send for fabrication without validation, there are Little Blue Wire (well, green wire) edits to be made. Fortunately, on this board, there was only one – I didn’t actually connect the output of the current sensors to anything. They went to a low-pass filter which was on both sides of the board, resistor on top, capacitor on bottom, to save space. Unfortunately, I neglected to actually connect the two layers.

The fix was to just join them at the signal wire using a jump. It certainly isn’t as catastrophic as when I cross a bunch of ground and common pins on the Segfault boards.

After this fix was made, my current sensors no longer “read” full negative current. 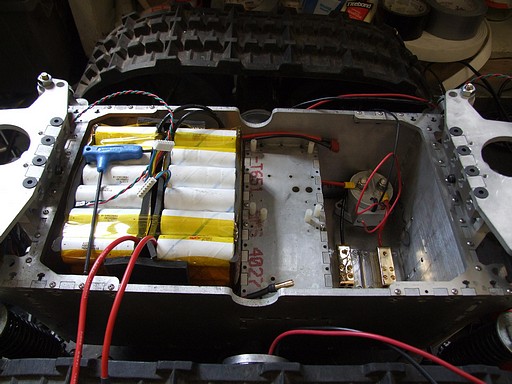 Alright, it’s mid-day on Thursday, so the electronics installation is happening NOW. In this picture, the batteries have been loaded in, the EV200A contactor (super legit and a total steal from Ebay) and distribution bus terminals have been installed. I’ve also put in the standoffs for holding boards away from the conductive surface below them.

The rider switches aren’t visible here, but they are small microswitches attached right under where the skateboard mount pivots. When I step on the board, the rubber shock mounts will deform and the switches will conduct, supplying 5 volt logic power to the RC circuit on the Nano Carrier breadboard. When I step off, the circuit discharges after about a second. I can then disable the contactor in software. 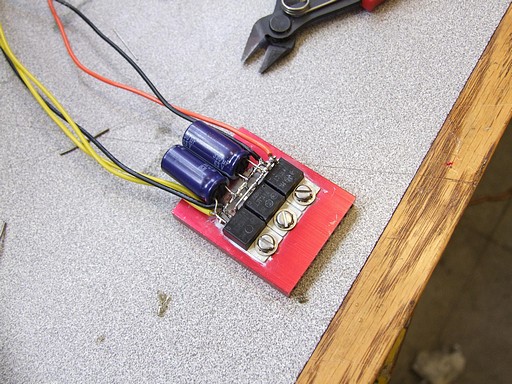 To drive the contactor and power the Nano Carrier, I was originally going to use a spare 12v DC/DC converter of the same type I used on LOLrioKart.

This would have worked if my electrical system was still 38 volts, but it isn’t. That DC/DC unit cuts out at anything below 36, which has certainly contributed to many embarassingly lame LOLrioKart demos.

Since I didn’t have a better idea, I just threw together a whole pile of 7815 type regulators. The load on the 15v rail will never be more than 1 amp anyway – unless I start piling on the gaudy lighting. 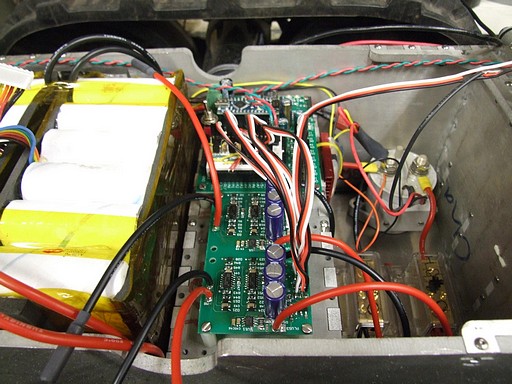 And everything has been messily mounted. What a nest… 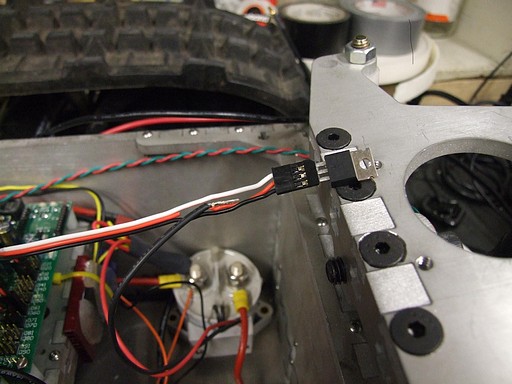 To actually switch the contactor, I rigged up a single MOSFET low side switch. In the most convenient discovery possible, a servo header has the same pin arrangement (Signal, 5 volts, ground) as a typical TO-220 power MOSFET (Gate, Drain, Source). In a low-side switch, the source is grounded and the drain is connected to power through the load. So all I have done above is splice in the contactor coil negative terminal into the servo connector, and the FET routes power to ground when commanded.

The EV200A contactor has internal coil suppression, too, making this the easiest rig ever. This part worked great.

I threw together some quick evaluation software for the Arduino that read current sensors, tripped and latched the contactor, and took in servo signals from a radio. All of those functions were confirmed functional, so naturally I wrote some motor driving code next… 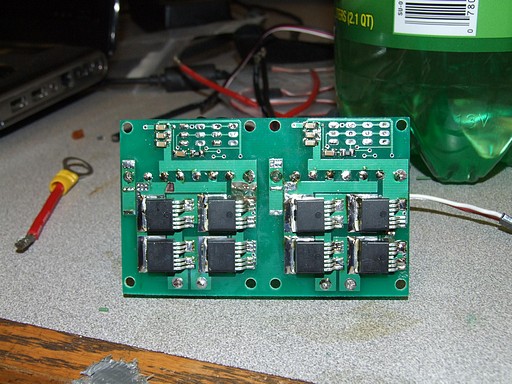 I’ll be honest: you probably saw it coming.

Oddly enough, there wasn’t total epic destruction – the traces on the board blew like fuses. The FETs, in all likelihood, are still fine. The symptoms, though, are indicative of Epic Simultaneous Cross-Conduction (shoot-through current) on both boards.

Something went terribly wrong. The 21844 gate drivers are supposed to prevent cross-conduction. To have the board fail in this manner means that they either were prevented from doing their job, like being damaged to begin with, or something was fundamentally wrong with the way the circuit was constructed.

Several factors differentiate the SCFB from my other motor controllers like Melontroller, the Segtrollers, and LOLrioKart’s controller.

The result of all this? Well, I decided to just stop at this point since I had to go set up a demo table in 6 hours. These boards have promise and will definitely be revisited and the whole power system rethought. 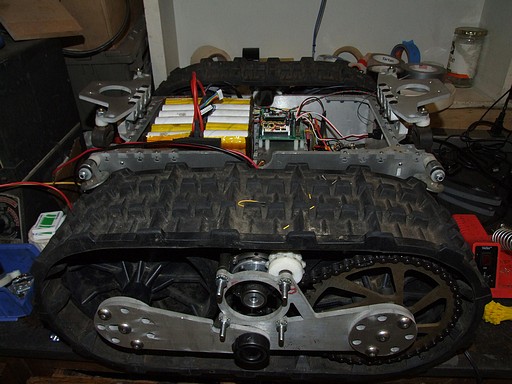 That’s all for now. I hauled the trackboard over to the demo table anyway, since it’s visually impressive, and it perhaps got the most “What IS this thing?” questions of all presented projects.