I’m happy to say that Chibikart has exceed alot of expectations.

Does this mean I finished it, finally? Yes. The build has taken in total about 3 weeks from announce to first ride test, which is rather short for one of my usually long and drawn out projects, but I was helped greatly by previously-made parts and an easy-to-assemble frame…..and not having to build a controller for it. Here’s how the remaining parts went down. The obligatory hoonage video is at the bottom. 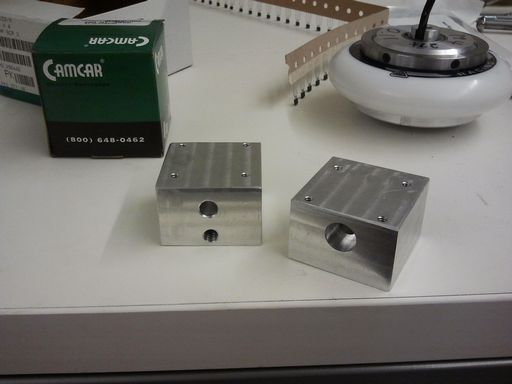 First order of business was making the rear wheel anchor blocks. Unlike the front wheel which has tapped threads in the block (due to the need to pass the steering kingpin), the rear wheel is a fully bolt-through configuration, with the socket head 1/4″-20 bolt sitting in a counterbored hole. 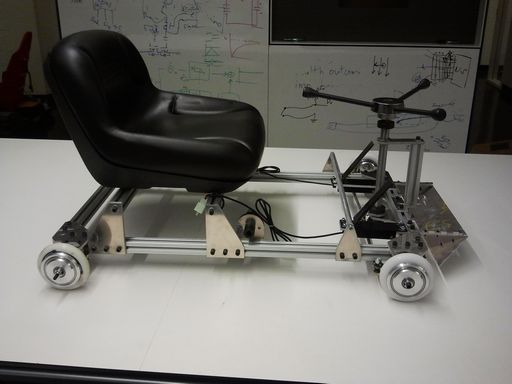 With that part finished, I could finally put Chibikart on four wheels…

There was much push-riding involved. The steering was found to be very nimble and light , probably because of the very low drag wheels and high lever ratio. This thing also rolls. Because the hub motors have so little cogging and the wheel is moderately hard, it’s almost as good as a ball bearing caster wheel. I spent a few minutes finding “low spots” in the IDC lab space hallways, because Chibikart would actually start rolling towards them if pointed in the right direction.

I’m also glad to see that the wheel mounting scheme does not deflect much under even large white guys riding it (myself being relatively small and vaguely Asian). Granted, this is all on a smooth linoleum floor, and the real structural test will be when it goes outside. 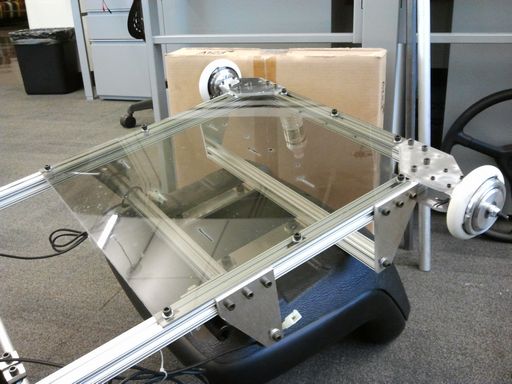 Now, to do something about the baseplate upon which all the electronics will be mounted. It’s waterjet-cut from a 1/8″ polycarbonate sheet. I put in some slots for nylon/velcro strapping in order to hold the battery, and some holes to mount the Jasontrollers, but otherwise planned on freehanding all the necessary distribution electronics and other parts. I also cut out some test parts for the planned mechanical brake, but those are not yet installed. 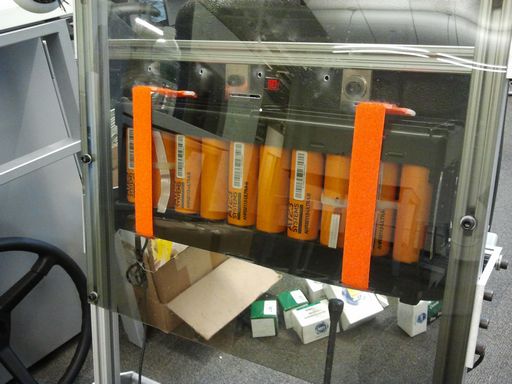 So here’s the big generically orange block that was in the CAD model. It’s a 10S2P A123 battery module using 32113-type automotive cells. The total capacity of the pack is about 300Wh. That means Chibikart has an asston of battery for such a small vehicle. Now, while I do have giant Turnigy lithium sticks left over from the giant quadrotor of doom which are smaller by volume, this random surplus pack fit the frame so perfectly that I had to use it. It’s also more enclosed and has an internal BMS. 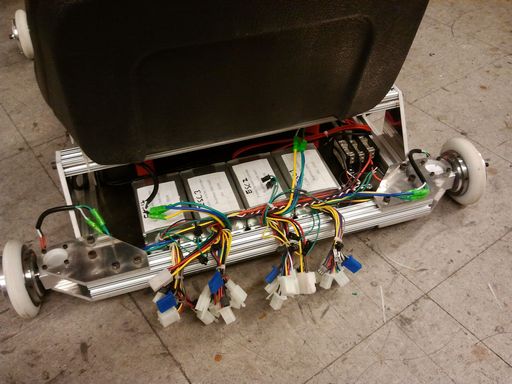 I didn’t take many pictures of the wiring process this time, because it’s very simple. In the upper right is a one-in-four-out terminal block which conveniently splits the battery input to exactly the number of power connections necessary. The throttle signal from the pedal gets split at a terminal block into the four Jasontrollers, each of which is otherwise only hooked up to power, ground, and motor. That’s it – 8 wires. That’s what I like about these things – they’re so bone simple yet effective.

Granted they also come with about 8,000 other wires which perform random generic electric bike functions (like pedal sense assist, cruise control, just not regnerative braking for some reason), and for all intents and purposes they don’t exist for this project.

At the pictured stage, I tried Chibikart in 2-wheel-drive mode with only the rear motors connected. As expected, starting from standstill is a little challenging because the motors have so little torque relative to my inertia. However, any movement at all is enough to cause the Jasontrollers to lock in and begin applying drive torque – even wiggling back and forth in the seat. They have quite an effective startup routine for what they are and how much they cost.

I expected that with 4 motors, it will either be better (all the motors contribute to starting torque) or totally useless (the controllers “park” the motors at the start in different directions, they fight eachother, and I have to perform an in-situ hip thrust to begin moving). Afterwards, I sacrificed some spare IEC power cords for their 18-gauge, 3-conductor hearts and extended wiring runs out to the front motors. Turns out, either situation can happen depending on where the motors stop – go figure.

I measured the current draw under acceleration at the motor for a totally stock (unmodified and unopened) 350W Jasontroller, and it was about 22 amps. Running at 32v, that means a maximum power throughput of 600W… Since the 36v native design can in fact run unmodified up to ~44v, it means that these controllers are a rare instance of some shady eBay Chinese product being underrated. 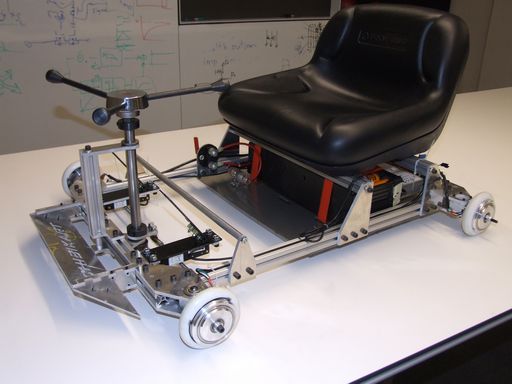 Here’s the “press shot” of the whole thing. I haven’t weighed it in yet, but it “feels” about 40 pounds. I must say I’m very pleased with the full 4-motor performance of the thing – I had expected that it would be on par with the skate motors (or at least, their very power-limited incarnation in the skates), but for some reason these are way peppier. This is probably because of their higher ampere limit (~20 amps per motor) and sliiiightly better efficiency. It remains to be seen how Chibikart handles an entire day of running outside, like at Swapfest as MIT vehicles tend to be debuted, instead of inside the cool, smooth, air conditioned hallways. Also, that lawn tractor seat is actually quite comfy.

And as promised, the video!

2 thoughts on “Chibikart: The Race To Completion”