I’m actually not sure where the whole “Mariokart” thing that’s going around the various tech websites originated from, but rest assured that Mariokart was not an influencing factor or inspiration for this design. If anything, shouldn’t it have comically large, not comically small wheels to be considered a Mariokart? For something slightly closer to Mariokart, see LOLrioKart, a project of mine from Back In The Day.

Chibikart, being a relatively quick CAD-to-completion project, is not without its share of random late-night-CADing-induced “This is TOTALLY a great idea!” moments. None of my projects are really complete without one. The first, and most immediately apparent, is this: 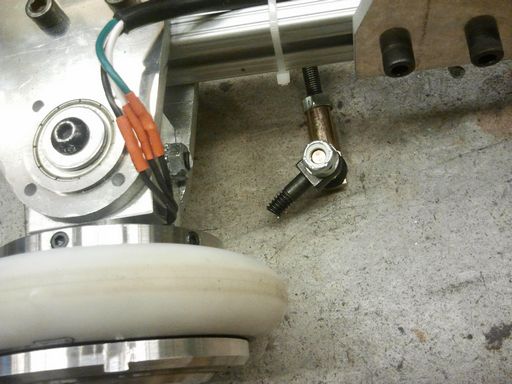 Chibikart’s steering linkage is made from two rod ends meeting at right angles. This presented a constraint problem since technically the majority load coming from actuating the steering connecting link (the threaded rod and ball joint) is in torsion. While using a “jam nut” fastening method worked most of the time, if anyone (namely, anyone who wasn’t me and didn’t know of this failure condition) wanged the steering too far, it would twist the black plain rod end. The result was totally changed toe angles and usually the wheels ending up pointed in opposite directions.

And then, for another example, someone running Chibikart into a wall when taking a turn too wide and just straight up shearing off the thing. I was surprised at how soft the steel alloy was. Since I deviated from my usual habit of “buy twice the amount you need” here, I was left with no replacements and also no choice but to quickly re-engineer the thing… 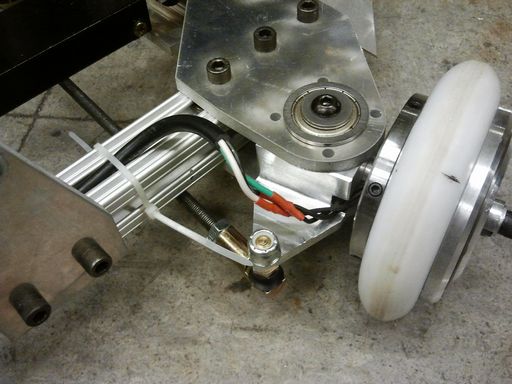 In a move I haven’t actively pulled since the undergrad years of yore (like maybe last year or something), I whipped up two replacements wheel mounting blocks out of solid aluminum billet in about 2 hours. These are essentially identical to the existing blocks except with a .25″ wide “ear” that sticks out the same distance as the rod end linkages did. Much better, more consistent, and it gained me another 2 or 3 degrees of steering travel  due to eliminating the big head of the rod end.

This block is also the proper height for shimming away from the upright arms. Now, none of the components rub on eachother and the steering motion is lighter than ever. 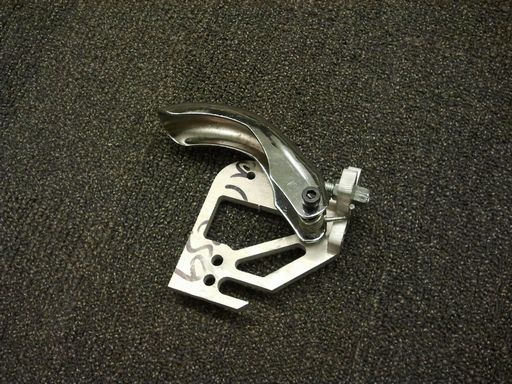 Next order of business was at least getting the rear brake parts installed. Here’s the main body of the thing with the Razor fender mounted. It pivots on a 5mm cap screw which is doubly nutted through the mounting plate. The stock Razor torsion spring keeps it sprung “up”. 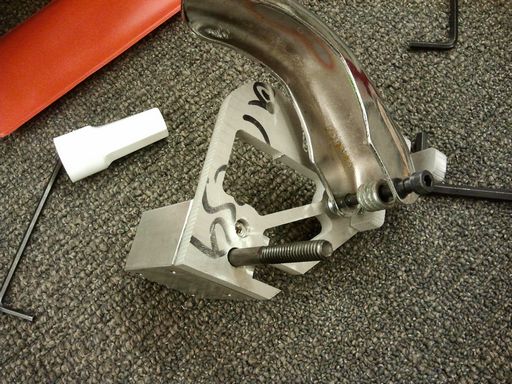 It slips onto the existing wheel mounting block like so, and is retained from rotation mostly by bolt clamping pressure but I threw in the set screw locking pin just in case. 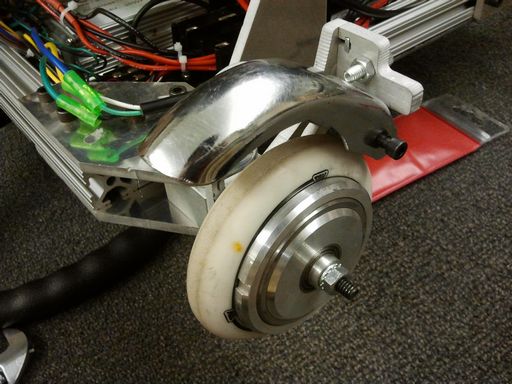 And it’s mounted. The brake will not be sticking up this far once it’s ready – I have yet to make the rolley cam thing which will actuate it. In its rest position, the top surface will be approximately horizontal. 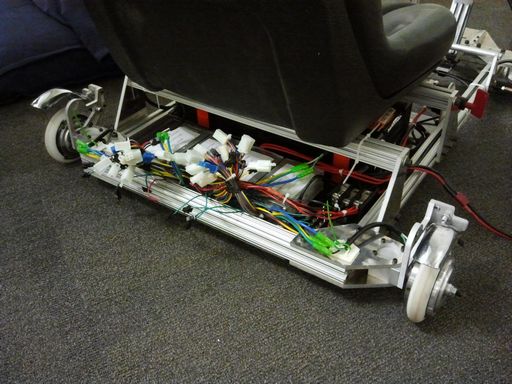 Both sides installed. If nothing else, these are pretty neat looking fenders on their own.

Oh, so here’s a picture I forgot about last time: size comparison! 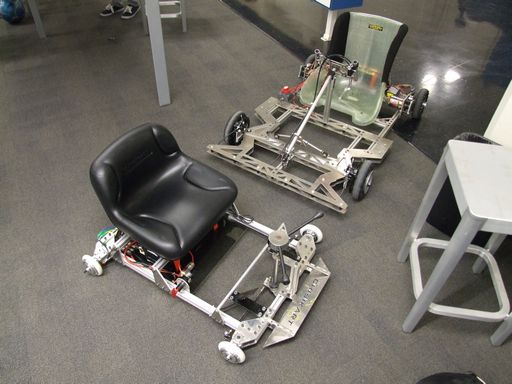 Chibikart was tongue-in-cheek designed to be “exactly the front half of tinykart“. It’s pretty close, I think.

Chibikart was sent up the de-facto MIT Random Contraption Proving Ground, where it completely defied (again) my expectations. The metric for performance on these tests is minimization of the energy-time product. From start to finish, the watt hours of battery energy consumed and the time taken in seconds is multiplied together. Now, the only physical unit that represents joule seconds is the Planck constant, so it’s essentially just a “score”. However, it’s a very telling score. Divide the energy consumption by the time taken and you have average wattage used in the climb (Joule / second). From the average wattage into the system you can remove estimates of motor losses (such as I^2R loss in the windings) and drivetrain losses to get an idea of the output watts. The game is one of efficiency – doing the most work while wasting the least energy and taking the least time.

Clearly, rider weight matters significantly in such a test since for the most part the You weighs much more than the vehicle.

Anyways, back to Chibikart. I managed a run that was only 62 seconds and 18.6Wh – which is on par with Melonscooter being ridden very fast, but consumed more energy – probably because direct drive magnifies motor imperfections. The total product, 1153 Whs, is actually pretty unique in the range of vehicles that have seen this test so far, and is the second best set of go-kart times (after tinykart, which holds the all-time record so far).

Chibikart pulled 1900W on launch as measured by the wattmeter, and the average draw going up the hill going by the Wh results is approximately 900W, or 225W per motor. Pretty close to the predictions. I didn’t observe any “motor unhappiness”, but that was likely due to the outside air temperature being something like 38 degrees at the time.

Here’s a Helpful Infographic made by the master of making helpful diagrams and infographics, Shane. This really needs to be zoomed in to be appreciated:

And the “initial hoonage” video: