The “skatemotor” design that ended up in the RazErBlades is kind of abysmal in terms of performance. They were wound with maximum torque per amp (Kt, the torque “constant”) in mind, but the result of winding so many single turns on the stators is that their winding resistance was very high. There weren’t many amps to be had afterwards. I pulled the left skate back out to measure the resistance of the motor, and it was about 1.28 ohms. Entire, single digit ohms. It just meant that I was losing one watt for every amp that was going through them. Since the DEC Modules were limited to 10 amps per motor and the system was 22.2 volts, I was losing potentially more than half of the maximum power to winding resistance.

Clearly this was not going to be acceptable if I was going to run them at 32 volts. The skatemotor windings were single turns of 24 gauge wire – not very conductive by high powered motor winding standards – and 36 turns of it per tooth came out to a torque constant of about 0.25 Nm/A. I aimed to hit this value again, but with bigger wire for less resistance. 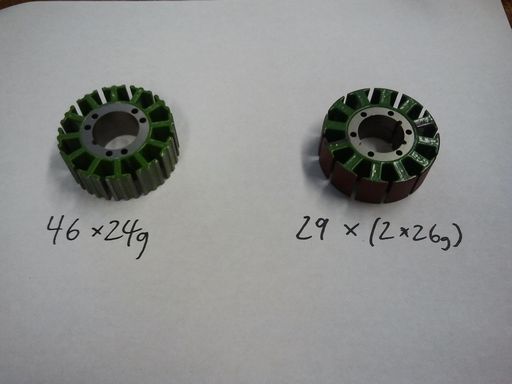 First step was to check out what copier motors I already had. I picked my favorite part numbers – RK2-0614 is on the left and RH7-5219 on  the right. I didn’t get pictures of the ‘before’ windings, but they were sufficiently dense to make me wonder if they were hand-wound. Given that these are all made in China anyway, it wouldn’t be surprising. The right one was particularly interesting, since it already used multi-wire parallel windings, and is actually the same tooth geometry that I used in the skatemotors originally. The left one has narrower teeth – potentially detrimental for high torque production since the small cross section of iron may saturate if I put too many turns on it. Only a pass with FEMM will tell me for certain.

Because I had four of the left (RK2-0614) and only one of the right, the choice to design with that one in mind was clear. I began running some rough numbers on just how many turns of larger wire I can reasonably stuff into the much wider slots. 36 turns of #24 AWG wire fit into the right with a fair margin, and I discovered that I could reasonably get about 30 turns of single #20 wire or doubled #24 wire into the slots. That would be really Adrianing it and being super-clean, too.

RazEr rEVolution was wound with double #22 wire, but making sure the wire laid flat and didn’t cross over eachother was difficult to keep track of, and by the end I was running out of patience. When the wires crossed, the advantage of packing is lost – as a result, the sides of the windings tended to be much fatter and messy than the ends. 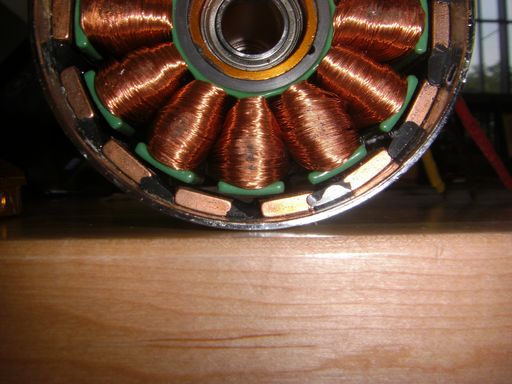 That’s 8 turns? Yep, that is the inside of the typical 80mm “melon” motor. Those things are wound with something like 90 parallel strands of very fine wire each maybe the width of a hair or so – possible #40 AWG or equivalent. Smaller wire is much more flexible and packs relatively easily, and to a degree you can get better results by packing more parallel strands of a smaller wire together.

There is a limit, however – the smaller the wire, the smaller the copper-to-insulation area gets. Even those 90 strands of #40 wire can only amount to a ~#20 gauge equivalent. In terms of circular mils of copper area, the former is (cite) 9.65 * 90 = 868 circular mils, and the latter single 20 gauge wire is still over 1000. I bet I could put several parallel #20 wires in a melon rewind and get even less resistance in it, because the larger copper wire is still enclosed by the same thin layer of insulation.

But the main reason they do it is for ease of winding – bigger wire is tough to form and bend, while a billion small strands can be wound by anyone, and in a production system which involves low skilled migrant workers the task must be accomplishable by anyone. 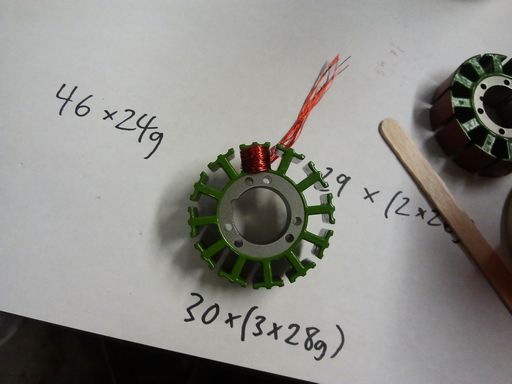 I tried a hex-28 gauge winding here, and I like it alot. Through some crafty decision making, I decided that six strands of #28 wire was a place to start with polystrand winding experiments. That, and MITERS has a 20,000 mile spool of #28 wire, or so it seems. Six parallel strands of #28 yield an equivalent of #21 wire, which is certainly a step up from #24 – a doubling of copper area.

I loved how easy this was to wind. All I had to do, really, was pull tightly, and the wire would just flatten and spread itself. As a result, that is a full 36 turns of hex-28 (so that caption is completely and utterly inaccurate). While I finished 30 turns successfully, the last layer ended on the outer diameter of the stator, and so I carefully wound back towards the inside diameter again, stuffing more turns on. A run through with a popsicle stick flattened the sides well enough that the whole coil seems to pack neatly under the teeth.

I strongly approve. Hex-28 is probably going to be the winding of choice for Chibikart’s 100mm skatemotors…. not just because we have like 20,000 miles of it. I swear. 36 turns would yield essentially the same back-EMF constant, so what I get is a torquier and more efficient motor since it can suck down more amps (more torque) but not heat up as much (less resistance losses). The resistance of that one coil with excessively long pigtails is about 51 milliohms. Four of those in series make a single phase, and eight of them make for one set of powered windings (two phases are switched at any one time in a conventional BLDC motor), so the total “line to line” resistance of the motor will hopefully be only 0.4 ohms! That means for the same amount of resistance heating, I should be able to stuff 1.8x the current through: sqrt( 1.3 ohms / 0.4 ohms) since dissipated power is proportional to current squared.

At this point, I’m just waiting on parts. I’ve ordered all the magnets, just 20 x 5 x 2mm bricks for now, from superdupermagnetgeorge. I’ve also went ahead and ordered some spare 98mm skate wheels since I’m sure if this thing actually works I will instantly drift and brake the current skate wheels into dust very quickly.