What good is a hub motor without the “motor” part?

Not very. So with both skate frames wrapped up and ready, all the mechanical components of the motors finished, and the control electronics (still) on their way, I was left with no choice but to start winding the motors.

Winding is the least favorite part of my motor builds (and probably everyone else’s) – it’s monotonous, repetitive, and at the same time, requires you to pay attention to very fine details, such as…

Overall, it means you can wind with reckless abandon if you want a motor that kind of works but is at best mediocre. Oh, also, I forgot… 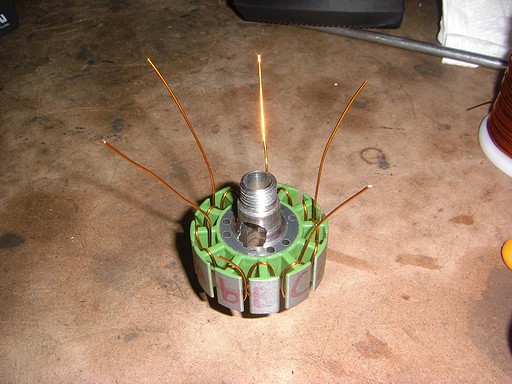 In order to make sure my transitions and terminations were sane, I performed a quick one-turn simulation of all the windings I wanted to make. I marked the stator teeth with their respective phase and orientation so I don’t lose track in the middle somewhere.

As those familiar with the Crazy German R/C Airplane Guy notation will observe, I am making a distributed LRK style winding. I prefer them over the standard skip-tooth LRK style because, again, of the reduced end-turn length so I can make the motors more compact side-to-side.

I settled for 36 turns per tooth on this motor after discovering that 12 turns using #24 magnet wire was essentially one fully filled layer.

N is the number of total active passes of wire. In a simple 3 phase motor, 2 phases are powered at any point in time. In a 12 tooth stator, that amounts to 8 teeth total. Each turn on a tooth is two passes through the permanent magnetic field of the rotor. I’m aiming for 36 total turns. So N = 36 * 8 * 2 = 576

B is the surface flux density at the outer diameter of the stator. A good N50 grade magnet has a surface remnance Br of 1.2T or so. Accounting for the airgap is done through the equation B = Br * (t / g + t) where t is the magnet thickness and g is the airgap thickness. For zero airgaps, it can be seem that B = Br.

L is the active magnetic length, which is essentially the height of the stator laminations. The motors I harvested have 19mm (0.019 m) cores.

R is the radius of interaction, which in an outrunner style motor, is the stator radius. R = 0.025 m.

“Nibbler” does not take into account many nonlinearities and nonidealities in the motor, and can overestimate maximum torque by as much as 1/3 or more, but it’s good to see that I’m in the right neighborhood. RazEr’s motor has a Kt value of approximately 0.25.

For real motor engineering, you should read this and this. 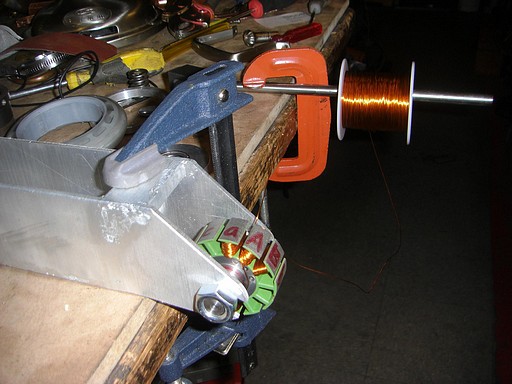 The skate frames themselves ended up becoming a great winding jig. Freehanding is fine for smaller motors, and I’ve done it plenty of times, but the sheer number of turns I wanted to put on this core meant that it required a slower and steadier method. I needed to be able to pull the windings tighter to pack them on. 36 turns on this core meant 3 layers of windings per tooth! 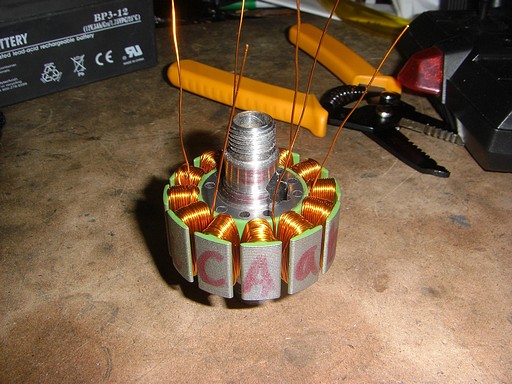 It took me a while to find the optimal motions and paths such that I could pile on the most turns in the shortest amount of time.

I discovered that it was much faster to wind outwards rather than inwards, so around phase B of this motor I would finish a layer, then immediately guide the wire back to the tooth root to begin a new layer winding towards the outside. This easily cut the per-tooth time by 50%.

Next, I found out that it was better to not keep the wire under high tension at all times. If I pulled too tight, and the wire ended up resting not adjacent to the previous turn, it was more difficult to “nudge” it back over. With low-tension winding, I could put a few turns on and then pile them all together.

I ended up choosing the winding pattern that caused the phase ends to emerge between its two associated teeth, making a regular hexagon shape. 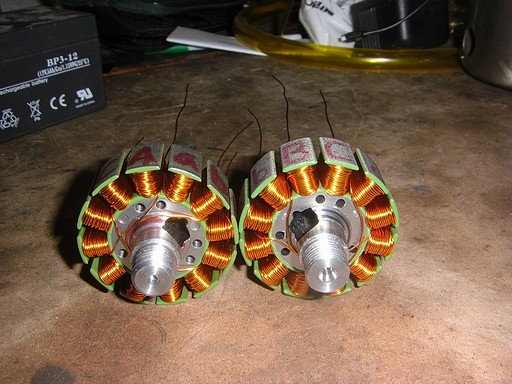 You know what – I’m on a roll tonight. Let’s make the next motor. 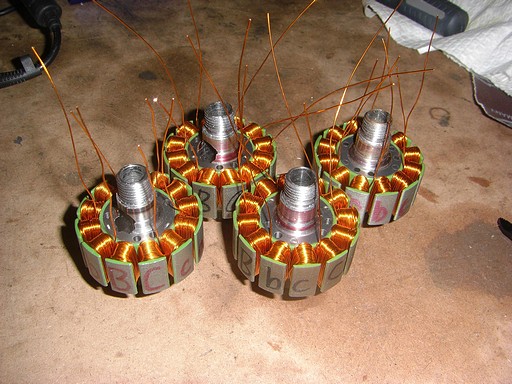 The next day, I sat down again and blitzed the rest of the motors. By this time I had become so efficient at winding the teeth that one whole phase probably took less time than the first tooth on the first motor. It still took about 5 hours, though.

I feel SO CHINESE. 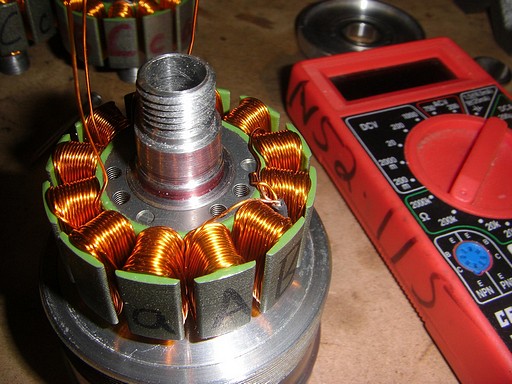 After all the windings were finished, I began the task of termination. I had to bring the (correct) 3 wires together to form the star point, then run the other 3 out to phase leads. Here’s one of the star points. 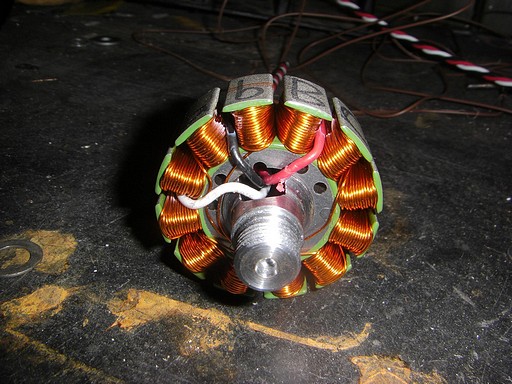 I used standard 18 gauge wire to make the phase terminations. Each pigtail was soldered to the magnet wire, then pulled and wedged between two windings. For temporary anchoring, I put a drop of CA glue on each joint. 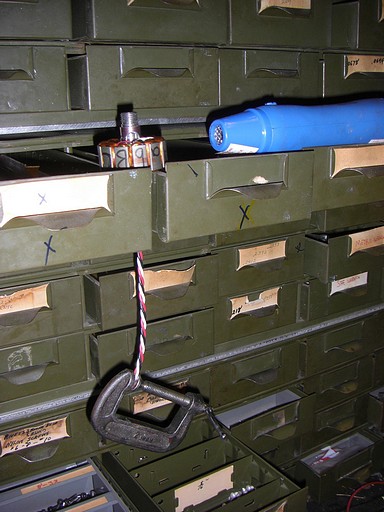 To make sure the pigtails were anchored properly, I suspended a weight (in the form of a C-clamp) from them and held the motor up. A set of hardware drawers made for a convenient surface to hang the motor from.

The curiously shaped object is some kind of weird hand-held heat gun. In this case, I had it blowing on the core to set the epoxy quicker. 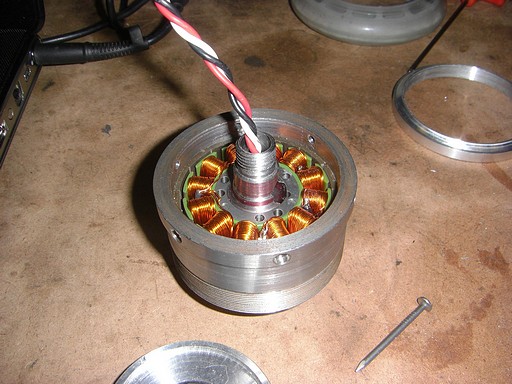 About 20 minutes later, I had a sensorless hub motor. RazEr’s motor is actually this type, and if I wanted to, work could have stopped here. However, I have a deep disdain of sensorless motors and controllers for small EV applications, so I’m going to press onwards. 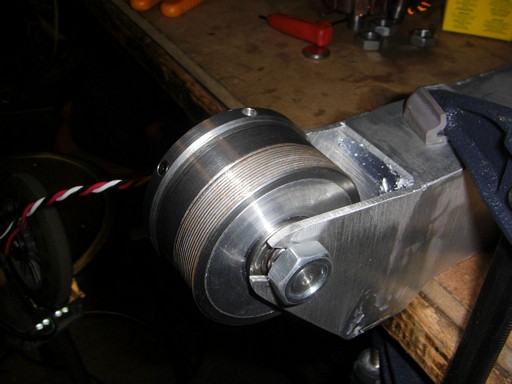 Here’s motor 1 assembled for a short run test. There’s no video, because it wasn’t much to look at.

I discovered that Razer’s controller didn’t want to start and run this motor. If I manually spun the motor while the controller was trying to start, it quickly leaps up to speed and then could actually continue to run down to a very low speed – just couldn’t get itself started. Numerous hypotheses were discussed, but the likely suspect is that the motor is such high impedance (about 1.6 ohms as measured by a constant-current power supply and multimeter) that the very low duty cycle applied by the controller during the starting routine is actually not enough to get the motor moving!

RazEr does this sometimes, but often a second push of the throttle is enough to twitch the motor. As detailed previous on the site, RazEr’s motor has an internal resistance of about 0.3 ohms.

Now we see why I hate sensorless drives. They make me afraid that I wound the motor backwards. 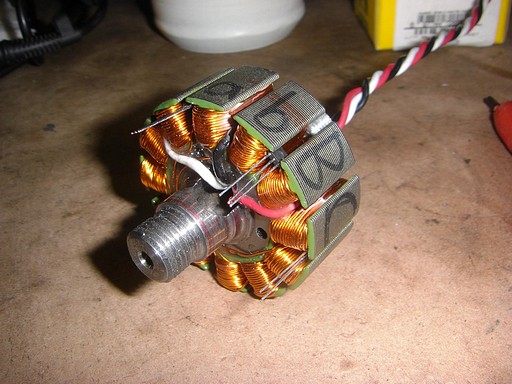 They were superglued in for locating, and will be point-to-point wired. After that, the joints will be drenched in another serving of epoxy. 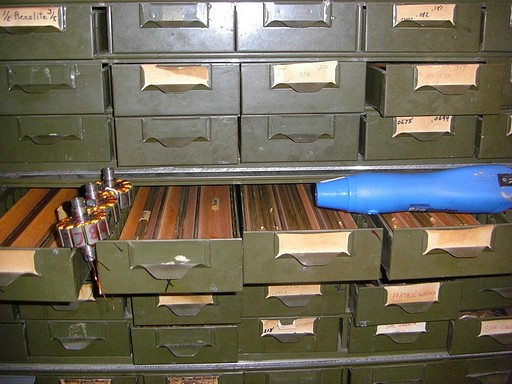 While I was contemplating sensor wiring, I decided to perform the stator center insulation step on the remaining 3 motors, since that step was essentially independent of the others. The curiously shaped heat gun now blows onto all 3 motors.

Next: Finish everything that I started! Terminate motors 2-4. Wire and test sensors for motor 1, then repeat for the rest.

Oh, and work on the dual-DEC-and-Xbee carrier board that will eventually go into the ‘blades!