Well, one of the new drive motors for Überclocker is, anyway. The bot edges closer to being reassembled and rewired. I’m going to devote this week to getting Clocker running, and bringing Arbor as close to it as possible. The next week, which is essentially the last one, will go to finishing Arbor as well as packing the robots up for shipping to Atlanta. That’s right – I can’t bring 2 full robots and all their support equipment with me on the plane. It’s not a TSA issue, and never has been – I’ve been flying with robots since the 2006 RFL Nationals. Instead, it’s a matter of Airtran billing me up to the sky for very excess baggage. Clocker by itself last year ate up to the second category of oversize and the first category of overweight baggage, which cost me a pretty $95 or so. Add to that a second robot and I might be forced to shove them on air cargo. Instead, I can build two small shipping crates and load them up to 50 or 60 pounds, then send it all UPS ground.

What this means is that I have to physically send away the robots several days early, lest they not make it in time for D*C. We’ll see how this goes.

In the mean time, a lathe chuck. 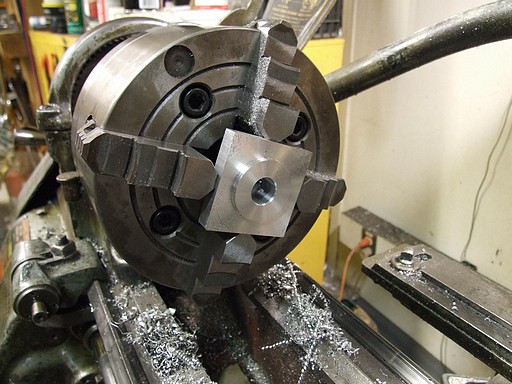 …holding one of the gearbox end plates. No matter how many times I complain about it, I always end up coming back to the square chuck. It’s simply the quickest way to turn out revolute-symmetric parts on noncircular substrates. This is the motor mounting end. 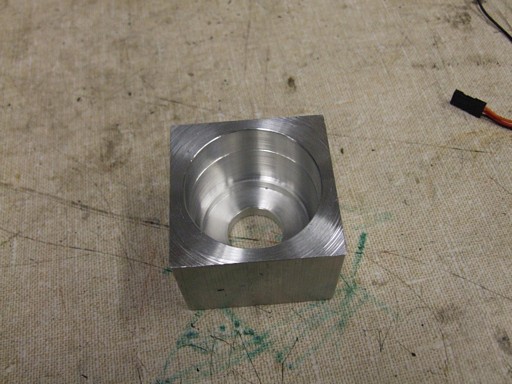 And this is the gear holding end. The needle bearing assembly from yesterpost presses into the bottom-most bore. 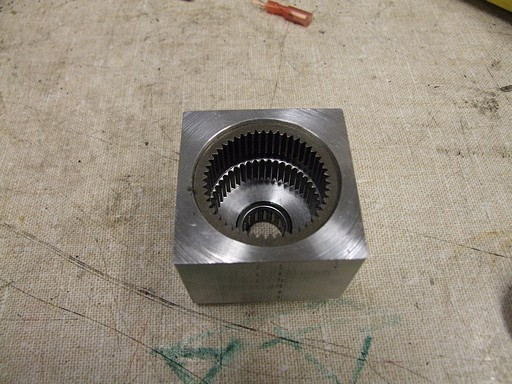 The original second stage shifter ring gear gets pressed all the way to the bottom of the cavity, at the second shoulder from the top. The trimmed first stage ring sits at the first shoulder level. All of these are \m/etalfits, which is a variant of the Beast Fit, which is an extension of the 20-ton-hydraulic-press-fit.

In the above picture, I have also installed the needle bearing. I took more care on this bore because compressed bearings reduce to the degenerate case of a solid chunk of metal. 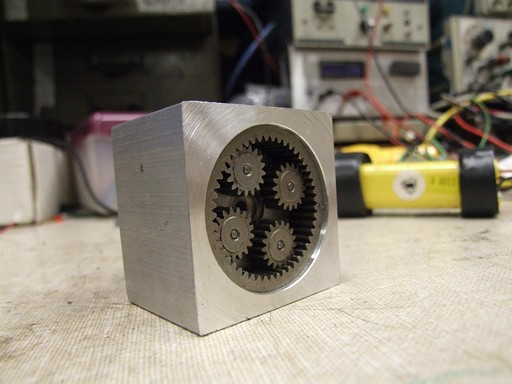 I dropped the DeWalt gears in to confirm axial spacings and diameters. Result: splendid.

The first stage gears actually sit about 1/8″ below the surface of the gearcase. This is by nature of the DeWalt motors, and is something I just compensated for with a 1/8″ tall boss on the motor mounting side (visible in the first picture). 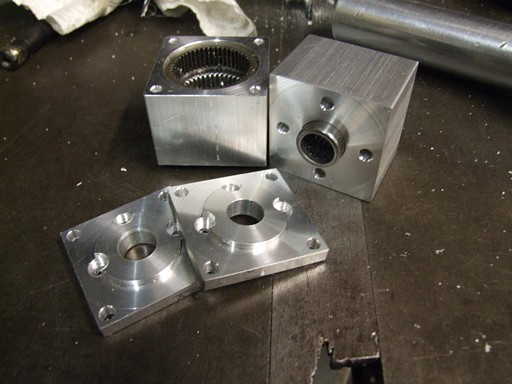 Repeat ad nauseam and add in a bit of mill time, and here are the gearcases with drilled holes. Because these parts were again square and rotationally symmetric by 90 degrees, I was able to pull off the Pop-Lock-Flip-It-and-Reverse-It to great effect. Who needs to move machine axes when you can just move the part around? 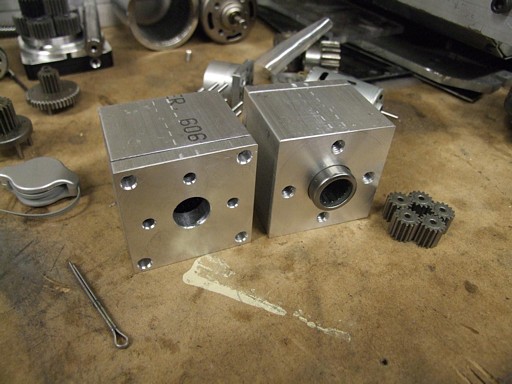 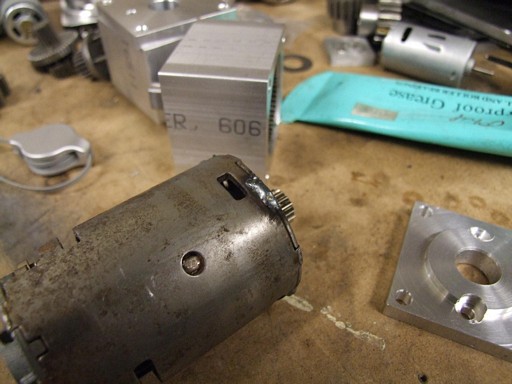 Something disturbing that I noticed on Überclocker during its Motorama showing was that the DeWalt motors were starting to come apart at their crimped seams. These motors were designed with ease of manufacturing in mind, and feature rolled-crimped-and-folded sheet metal everything. The face plates in a motor are normally retained by bolts or are one-piece constructions, integrated with the can itself. But these are crimped together – or rather, were, since the mounts I used only held them by the faceplate.

Solution: tack weld! I dropped a small bead in 4 locations midway between the crimps. This ought to hold them… 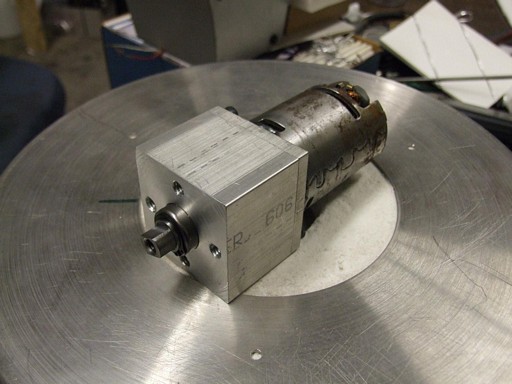 Because I replaced (forcibly, and irreversibly) the pinion on Clocker’s 14.4v DeWalt motors with a HF drill pinion, I actually had to break out my two stock 18v motors to use on these gearboxes.  The combination of lower gearing but higher voltage motor will actually cause Clocker’s top speed to remain roughly the same.

To my relief, everything fits. There’s about a millimeter of axial slop in the gearset if I loosen the retaining ring and just let all the internals slide. I find this slop to be totally acceptable, since even if I engineered it to be spot on, after the first match it will be off by a millimeter anyway. 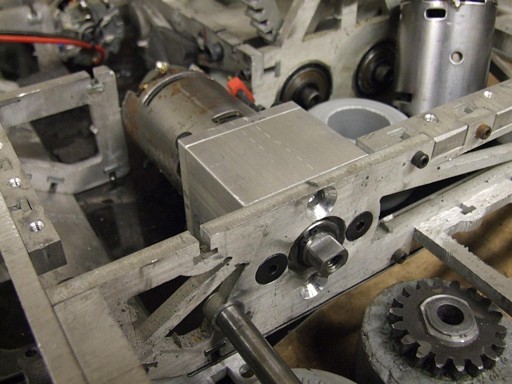 Finally, the new drives mounted in the robot.

The increase in length by about 1/8″ means that the endcap of the DeWalt motor is now tangentially contacting the supports in the back.

What’s left to do on Überclocker? Surprisingly little. I need to make one more hollow gear carrier for the other side, but that’s it. All of the other work on the drivetrain is just putting it back together. However, I might make some hubs for the McMasterBots wheels that are compatible with the existing hub structure.

I ripped all the wiring out of Clocker such that I can’t effectively put it back together the same way, so the robot will be rewired from scratch. It’s better this way, because I felt like I could have routed quite a few connections better than the first time around.

Arbor is currently hanging in limbo as I wait for parts to get cut, but depending on how many drill gears I can salvage, I might not actually make a replacement DeWalt drivetrain for it. Arbor never had a gearbox stripping issue at Motorama – in fact, I harvested a working gearbox from it to fix Clocker up.