The robots are slightly less skullfucked.

Only marginally, though. What physical work have I performed in the past week or so to bring them back to competition spec? Relatively little. Shipping lead times and oh god i need to finish these scale CityCar wheel modules has mostly kept me away from the robots.  However, during this “productive downtime”, I’ve made steps into testing part fabrication and designing system upgrades such that they will amount to less work than building one whole robot from scratch.

Now, depending on which side of my projects you know the best, that’s either an imperial asston of work to be blitzed all in one week, or just an hour on the waterjet and 11 on Facebook.

In the last Überclocker episode, I presented this crude representation of the new drive gearmotor layout: The trickiest operation involved in manufacturing this design is the process of turning a deep internal part, the 2nd stage carrier / 3rd stage sun gear, into an output shaft mount. This would be relatively simple if I had more advanced tools such as a broach (or the patience to hunt them down), but in MITERS, the set screw, “elastic compensation”, and Loctite reign supreme. In this case, I decided to go for the press fit.

The 3rd stage sun gear in a DeWalt gearbox can support a center bore of about 12 millimeters. The pinion itself can be shaved down to a 14mm shaft relatively easily, so that’s the route I took. 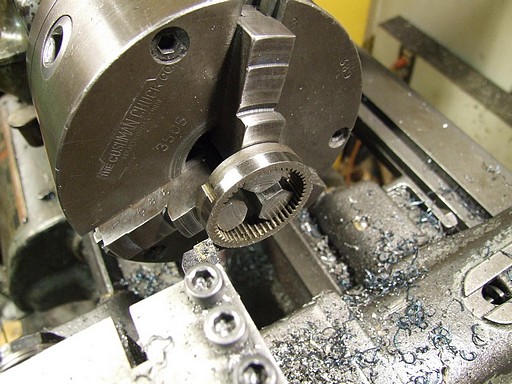 Before that, though, I decided to finish the easy operation of turning down the clutch flange on the first stage ring gear, so the overall diameter is under 1.75 inches. Here is where I discovered the quality of metal sintering on DeWalt gearboxes as compared to the cheap import drills.

Harbor Freight (and co.) drill gears make steel powder when machined. These gearbox parts made curls. The amount of pressure needed to get steel particles to fuse together into a ductile solid is pretty incredible.

While I was jiggling the machine levers, I started to think about how to fixture the 2nd stage carrier such that I could perform concentric operations on both sides. The problem is that I needed to turn down both the outside diameter of the gear and the inside diameter. While I could have made a chuck spacer such that the 3-jawed chuck could grab the thin flange portion of the carrier effectively, I wasn’t as confident in how concentric the 3-jaw chuck ran. It is, after all, a shady eBay chuck. 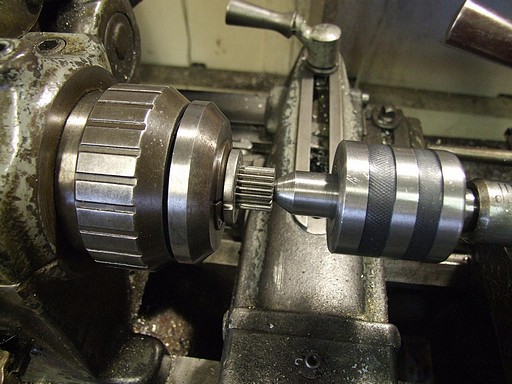 The solution was remembering a trick I was shown once called pressure turning. Essentially, pressure turning amounts to pinning the workpiece against the spindle so hard that friction alone is enough to transmit the cutting forces. To do this, you need a live center with real lubricated rolling bearings. Luckily, we had one. I mounted the carrier in a loose-fitting collet that just acted as a buffer space for the planet gear pins. The collet was not tightened or closed. Then, I rolled in the live center and cranked down on the tailstock quill. Hard.

This is where you get to find out whether or not the lathe headstock has good thrust bearings. The Old Mercedes started making an ugly crunching noise, which was luckily silenced by a few liberal squirts of spindle oil into the semi-exposed thrust bearing race.

One side benefit of this turning method is that the piece always stays with the live center, so it mitigates workholding wobble that might otherwise be present. 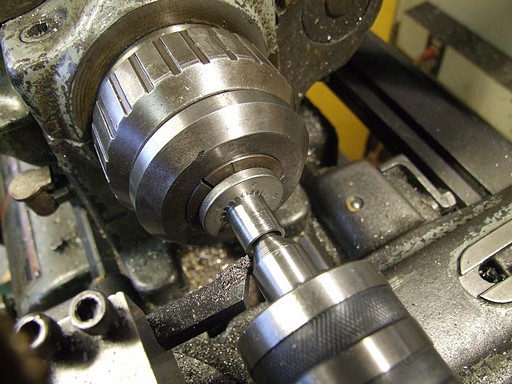 A few passes later, all the gear teeth are gone. It is not shown in this picture, but I added a new retaining ring groove in the same setup. 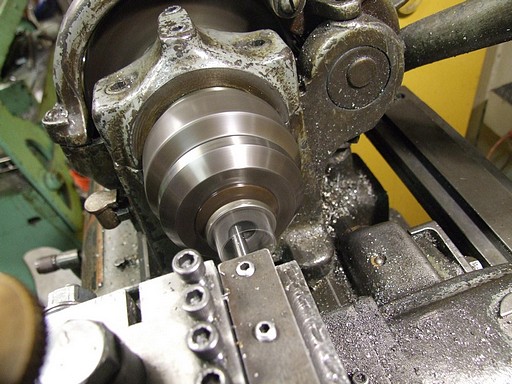 I turned down the former pinion to 14 millimeters dead on – enough to snugly fit a needle roller bearing onto. As 14mm is a hair under 9/16″, I flipped the piece around and locked it in a 9/16″ collet. Now the center bore was accessible (no blockage by the tailstock), and I bored it to a hair under 12mm diameter. 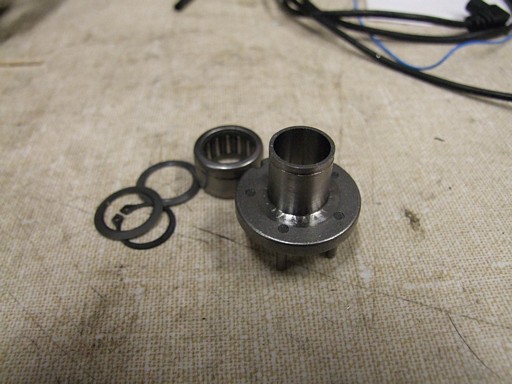 Here’s the hollowed and turned shaft, with needle bearing, retaining ring, and some shims. I got a bag of 0.1mm shims from McFaster-Carr to take up any axial error resulting from inconsistent retaining ring groove cutting. 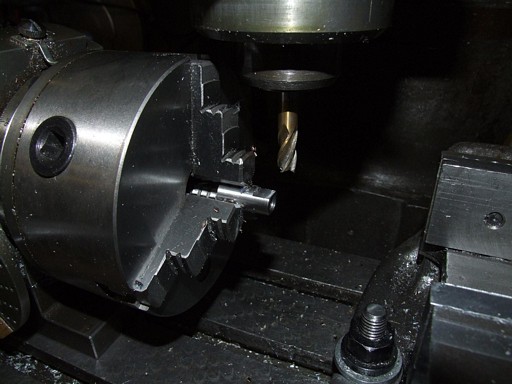 It’s been a long time since I’ve made such a mechanical and machining oriented post. I must say it’s very refreshing to just mince metal again. Here’s the insert stub shaft undergoing the one operation it actually needs, which is flat-milling. I bought some 12mm precision-ground O1 steel rod, which seems to go for 5 eggs and half of a slice of cheese per 6 feet on McMaster. Because I could finally be confident in the shaft diameter, I could just end-tap it and then put the flats of cheap waterjet gear retainment (+9000) on it. 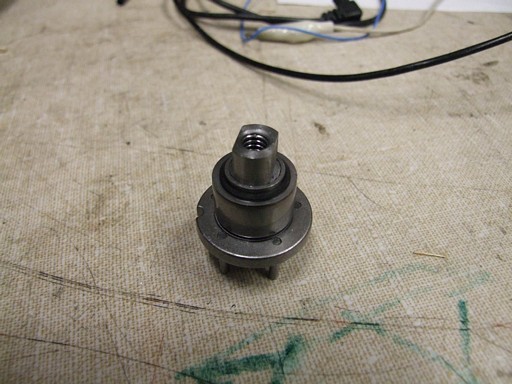 After the flat cutting, the stub shaft was Beast-Fitted (an advanced cousin of the press fit involving beastly strength) into the hollow former pinion.

And suddenly, I turned a planetary gear carrier into an output shaft.

That’s all the work Überclocker for now. I was mostly concerned with how the pressure turning process would actually work, and how tightly the single needle bearing output could be made by someone with my level of machine patience. Overall, I’m confident the single bearing output can work – there wasn’t a good ball bearing or doubled ball bearing selection for the shaft sizes that could be made from the output gear.

Left to do on these “FrankenWalts” is making the aluminum gearbox case and shoving everything inside. After that, Clocker should be running again.

Arbor is currently well-strewn about my robot table at MITERS. Much of the work on it in the past week has been inspecting the parts and designing the upgrades. Last time, I was investigating how to make the “structural loop” of the saw arm wider for more stability: The dark red and blue are the positions which I hope to extend the anchor and hinge points to, such that they use the entirety of the robot frame for support. I’ve made alot of progress towards that, as well as  redesigning the claw actuators to fit their new home in the robot’s anterior. Here’s the rundown: 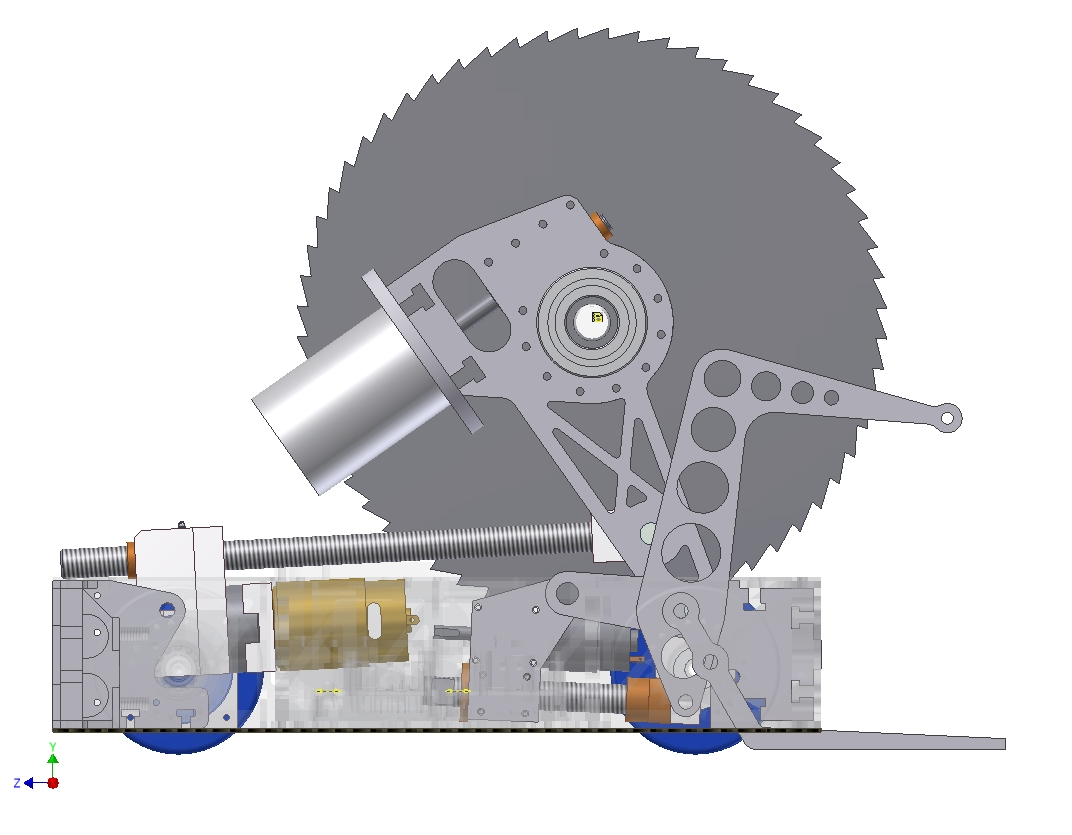 In short: The saw actuator is now hinged at the rear, and the claw actuator is slung underneath the original saw actuator hinge point and drives the claws themselves through a slightly ass-backward inverted crank linkage. See if you can visualize how the claws move: 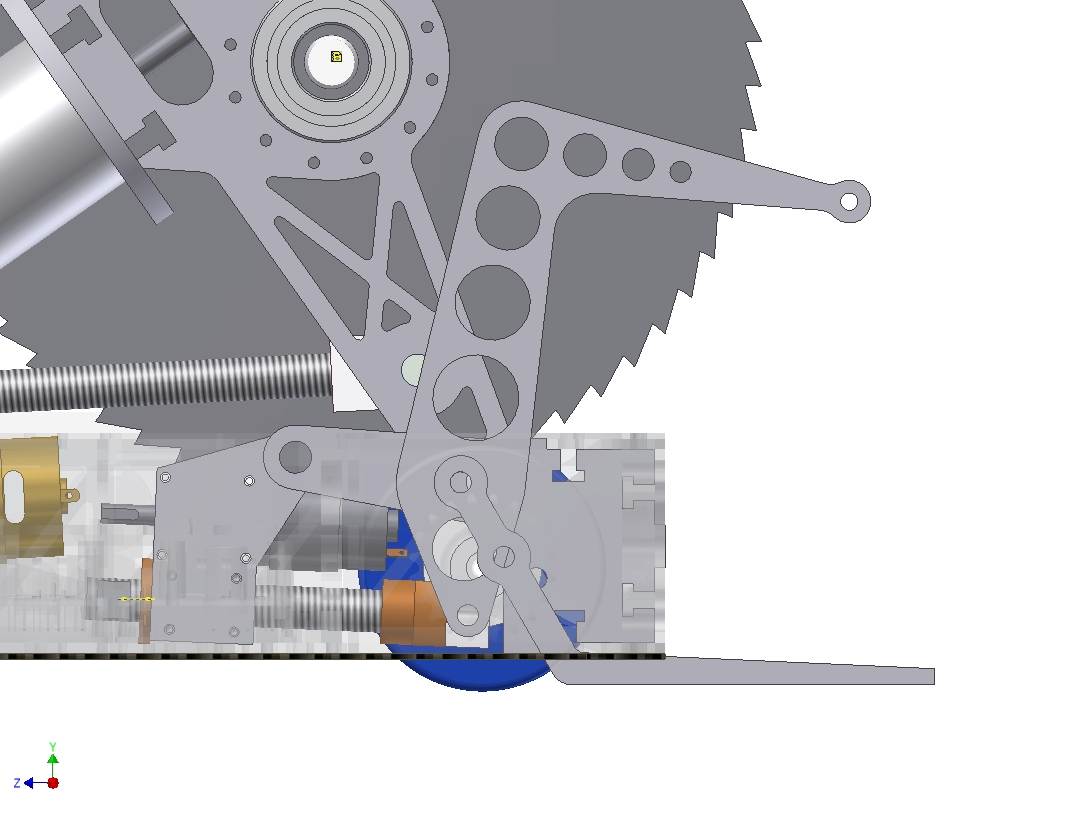 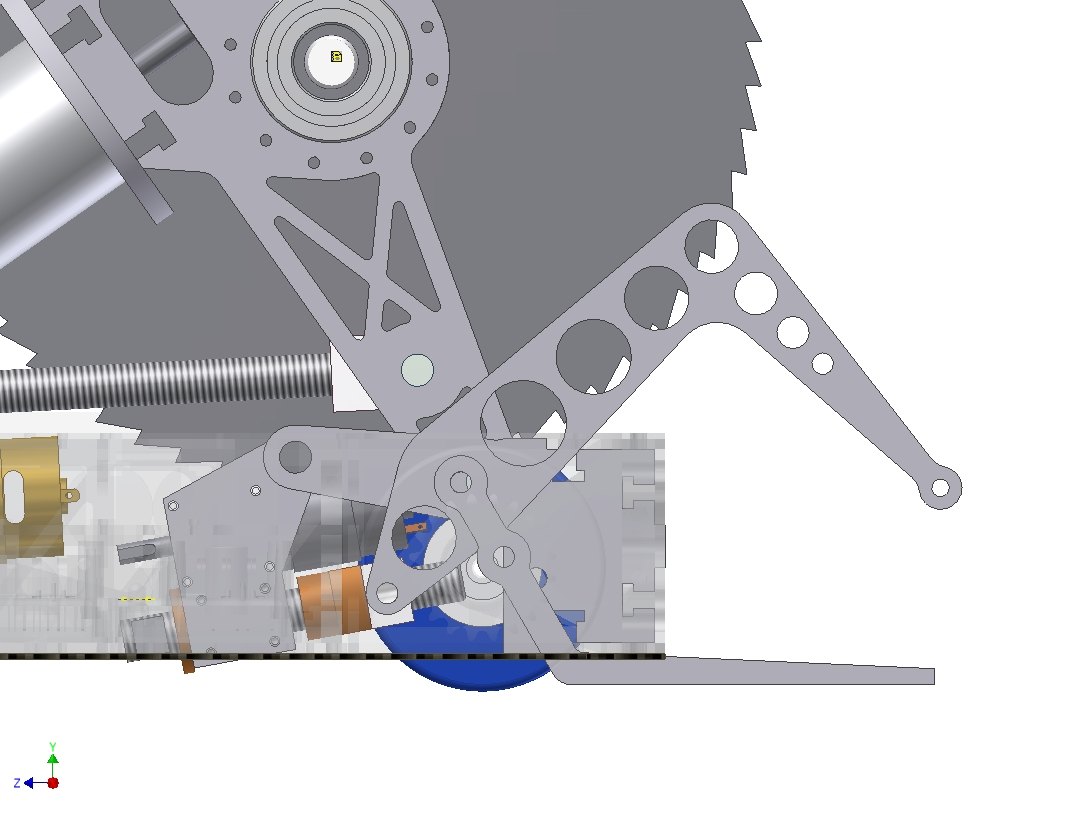 It took a while of stuffing and alot of happy hardcore to get that design through. The claw’s grabbing capacity (grabacity? grabass-ity?) remains the same – from frames about 6″ tall to those about 1.5″ tall. I have to recut the claws themselves to conform to the new angular displacement range, but that’s easy. 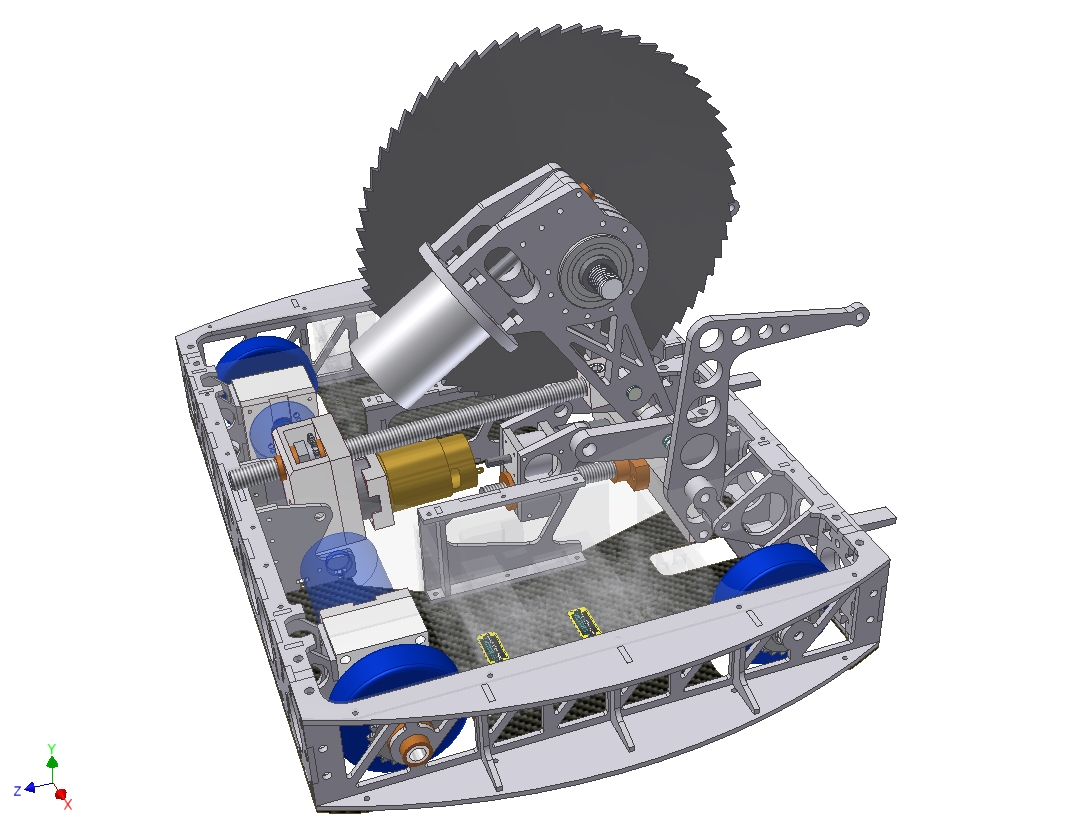 An overview of the new situation. The claws are now driven together by a single rigid crossbar instead of two roughly independent-but-sort-of-coupled-still-you-know-just-friends ball links. This should constrain the whole leadscrew nut assembly from just rotating itself to a point where seizing friction causes difficult letting go.

I originally spec’d a 1/2″ diameter carbon fiber tube to replace the 7″ or so of steel Acme leadscrew that wasn’t being used for its Acme-ness, but decided that saving 6 ounces was not enough to justify buying 3 feet of CF tubing at a price of around $50 – just to use a few inches. 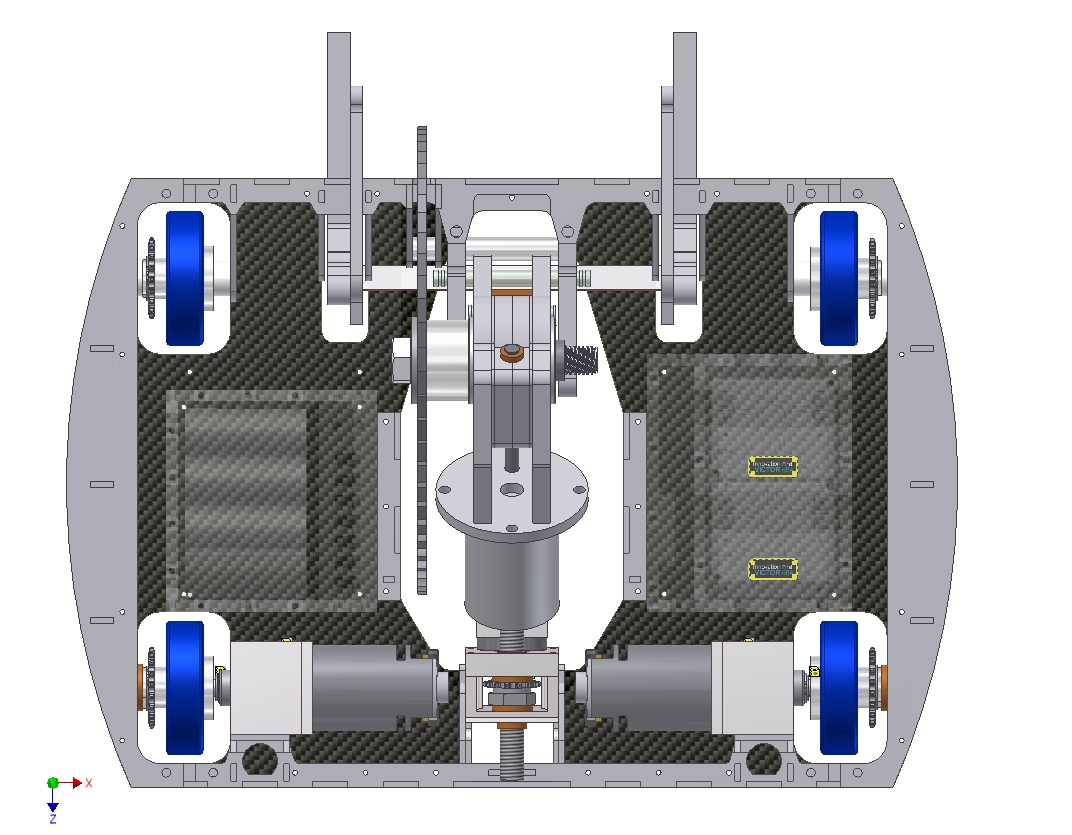 An overhead view better shows the claw linkage crossbar as well as the FrankenWalts dropped into position. For Clocker’s gearboxes, I only have to make face-mount holes, but for Arbor, I need to make side-mount holes. 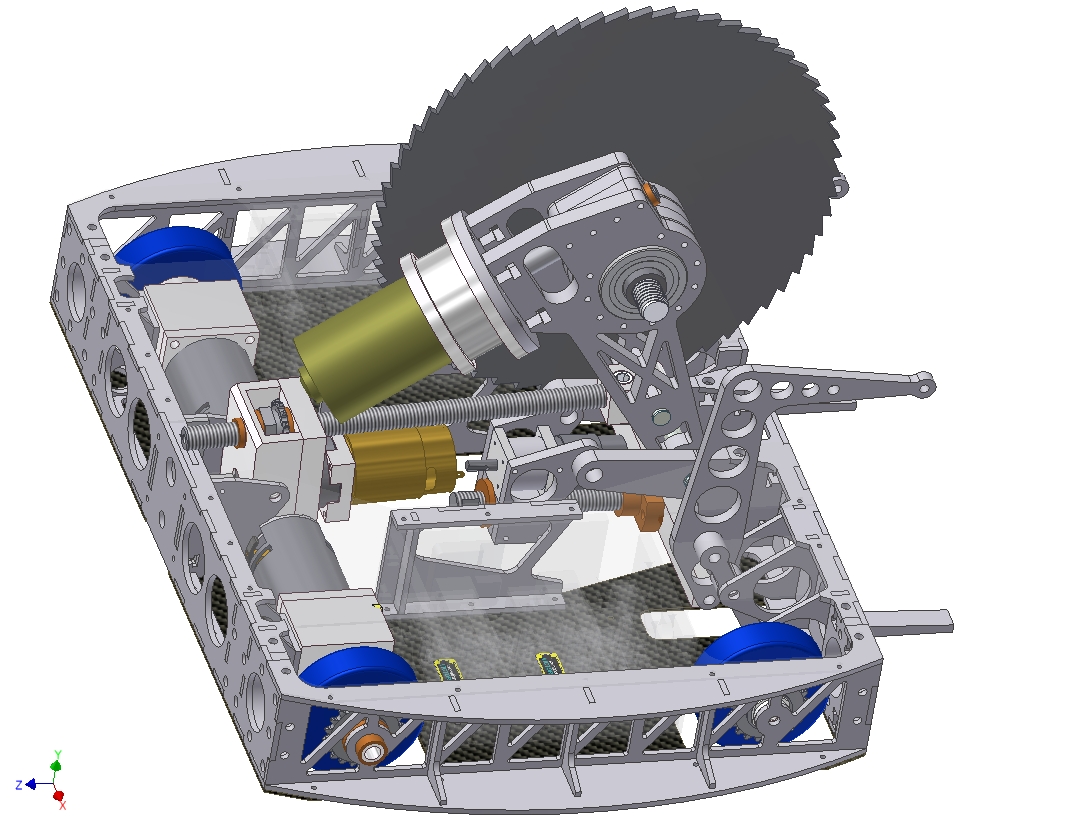 Now here’s the exciting part – the replacement for Deathrunner. I’ve elected to change out to the Mini-EV-alike motor with one caveat: that it be “pre-geared” to drive the worm gearbox. The motor rotates at 18-24,000 RPM no load, unlike Deathrunner, which barely hits 4 or 5 thousand on a good day. Driving the wormbox at 5-digit revs is just going to turn most of the power into heat.

As luck would have it, I have most of the wreckage of a Banebots 48:1 P80 gearbox. The 4:1 stages of this gearbox have identical sun and planet gear tooth counts, so I have gears left over to bore out as a motor pinion (since I can’t find the original motor pinion).  I intend to use 1 stage as a 4:1 pre-ducer. In the above image, the MEV-alike and the preducer gearbox have been modeled in more detail.

In total, the gear reduction from the motor to the saw will be 120:1. That’s  higher than most lifter gearboxes. With the self-managing torque characteristics of the DC motor, I really hope Cold Arbor will rip some serious shit at D*C.

With all of the replacement parts designed out (oh, minus that front frame assembly, which will be addressed), I’ve ordered parts and intend to get all this fabbed soon.