While writing my previous post about moving back South, I decided that there was enough content about putting together the garage workspace to warrant its own post. You see, this is really the first time I’ve ever really built up a workspace for myself only. I’ve built up and operated/managed quite a few facilities now, and even if it was “my shop” in the sense that I oversee and get to use it a lot, it still was always shared.

There was my time at MITERS, the MIT student makerspace – then upstairs in my research group the MIT International Design Center. Then another shared workspace at the old mill building we called “The Mochi Palace” prior to it being converted over for company use.  I suppose there was Big Chuck’s Auto Body over the spring and summer, but that was a very temporary and focused setup. My hope is this shop will be in place – or at least travel with me – for a few years yet.  But I’d be lying if I said that brief taste of having a workspace that was just mine and wasn’t critical to the operation of something else, or had to be kept up in appearances for somebody else’s tastes, didn’t influence my ultimate decision to seek less costly pastures.

First, before we get to the shop, though, we gotta talk about The Move: 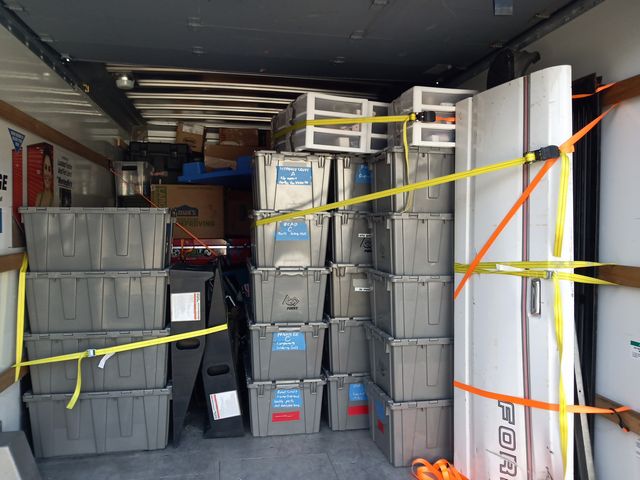 I’d already containerized my life pretty well due to the somewhat frequent moving of shops in the past few years, so I just continued ordering more of the same sized 27″ totey-bins. The FIRST Robotics branded ones date back to the “Recycle Rush” game a few years ago and were picked up for real cheap. This meant that beyond loose large automotive tools such as the engine crane and errant van parts, the move was quite well coordinated. What I didn’t get into totes got put into some large cardboard boxes left over from company-received shipment (e.g. of toolboxes and big plastic tanks among other things).  The 16 foot Uhaul truck was filled to about 4 feet in front of the door, which was earmarked for furniture.  This whole thing was tied up in the “web of lies” formation shown above, as we nicknamed it.

While I’m not that big of a stickler for organization, it was a good time to take account of everything heavy that I owned, and I actually sold off a lot of stuff on eBay over the fall months that more or less funded the entire move! Hurray! 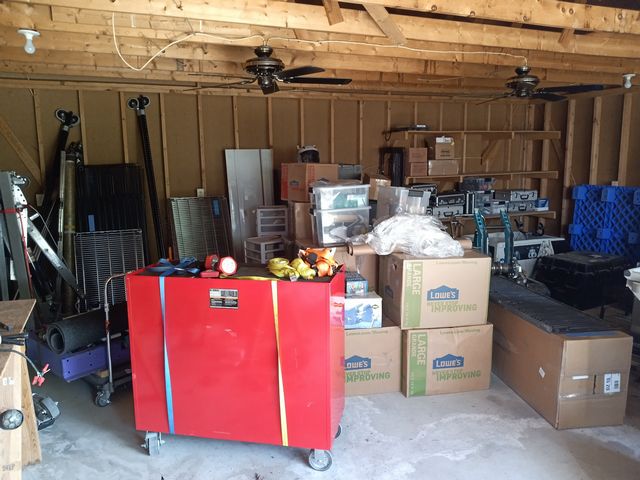 First order of business: Puke everything inside the garage and deal with it later! 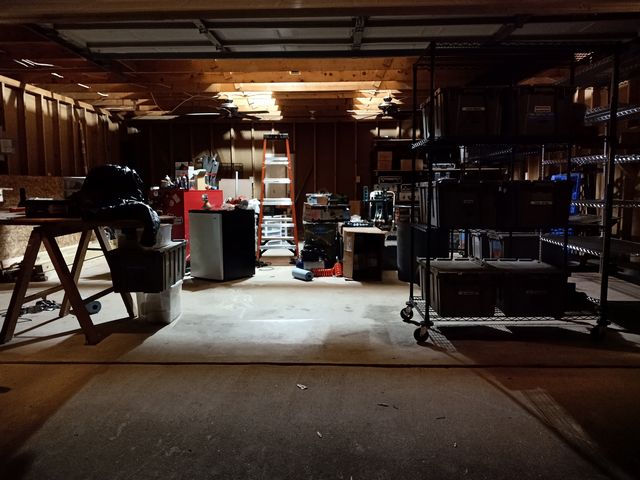 Couple days in and I’m working on setting the shelves back up, at least, so I can start throwing totes and robot parts onto them. 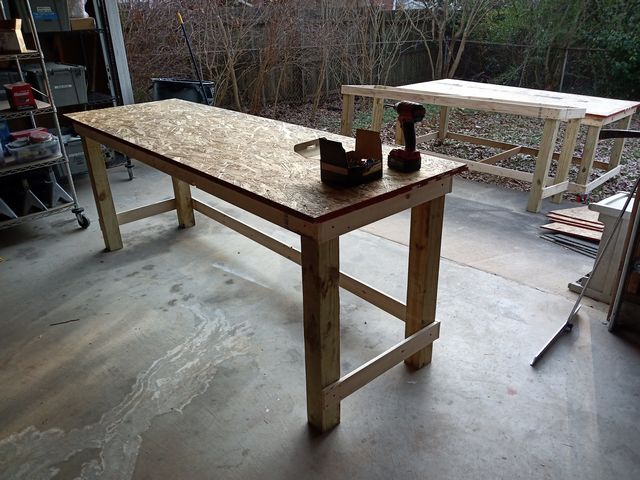 I also decided to just spend a weekend in early January and build myself some workbenches. I spent a while scouting Craigslist, classified ads, and equipment dealers, but wasn’t really finding any ones that looked good in the quantity I was hoping for. There were some, but I’d basically be buying new anyway costwise (Then I’d just buy new). So instead of dropping like $1000 on workbenches when I can blow on Overhaul instead, I decided to spend $100 at Home Depot and knock these out. I made two 3 x 8 foot benches in the “usual” hobbyist style – for some reason, basically every workbench I’ve seen be handmade is made this way. Guess it’s a pretty solid design for the effort involved. 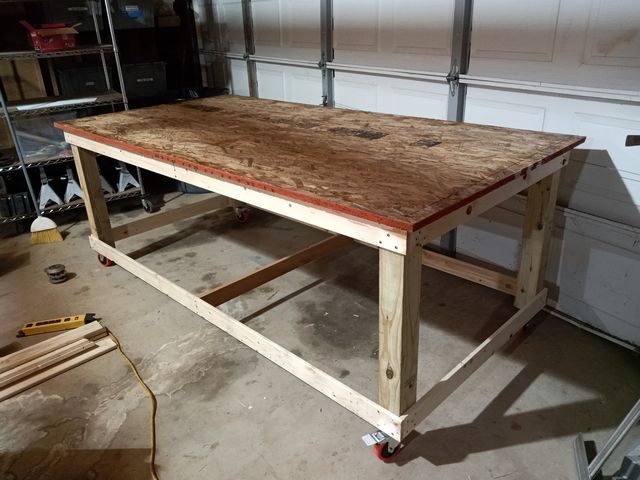 I also made a rolling table for Overhaul and eventually other projects, just the same method but with the legs cut short so I could put it on a set of total-locking casters, and have it be… 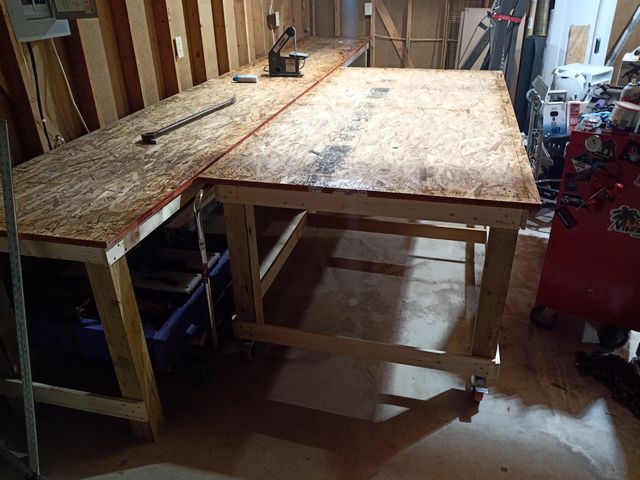 …equal in height to the benches for easy transfer of things on and off!

Overall I was quite satisfied with the “Majority of 1 Saturday” work and cost. My only regret? Using the OSB as a top. I might skin it in hardboard or MDF later on. The tops are double layered 1/2″ OSB – nice and sturdy, but don’t run your hand across it. I coated the edges with some left over spray-on urethane I brought down, which lowered the splinter factor somewhat. 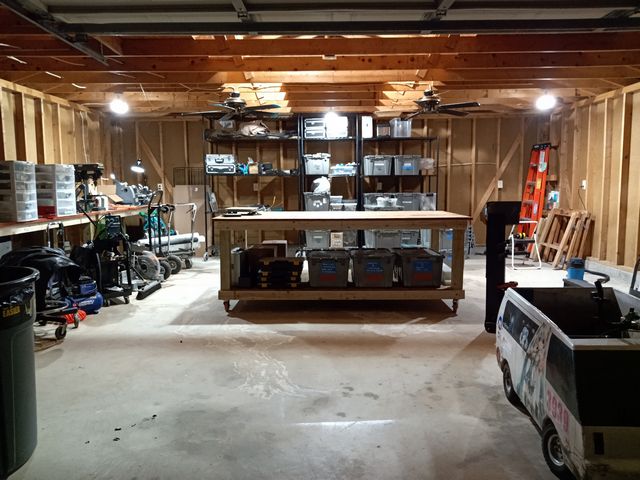 By mid-January, it’s almost looking like a functional workspace! I noticed there was a light fixture with a broken bulb up above the lower set of rafters, so I decided to get a gigantic 100W (actual!) LED “corn cob” light to put up there. It really lights the place up, but casts strange shadows due to the rafters. 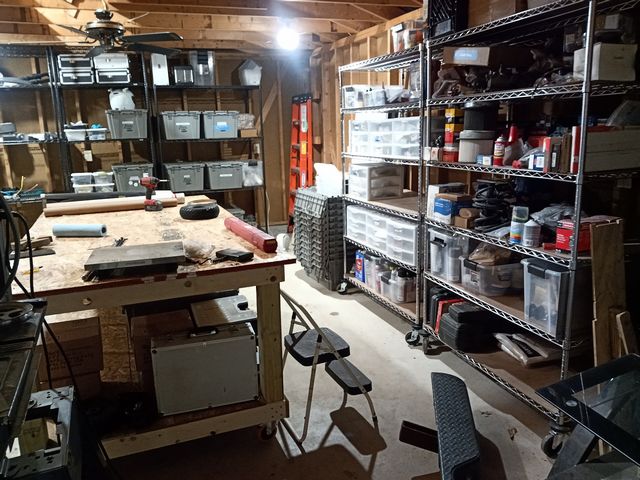 I ordered extra shelves to unpack Big Chuck’s Auto Body and also finally give my screw collection a home. 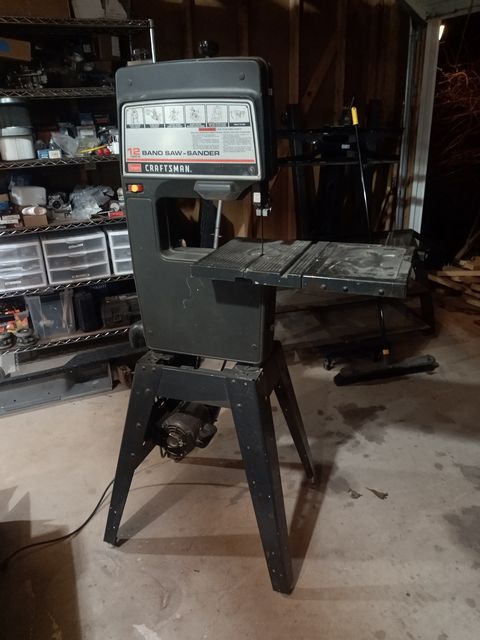 When the opportunity presented, I also went on tool runs based on findings from Craigslist, Facebook Marketplace, and the like. I managed to land this ‘vintage’ Craftsman bandsaw for only $100. I was out to get a vertical bandsaw to at least be able to cut most sheet materials to make stuff if need be, and wanted to avoid getting a chintzy small one. This Craftsman was the perfect size – I could wrestle it around, but also trusted it was solid enough to do actual work. 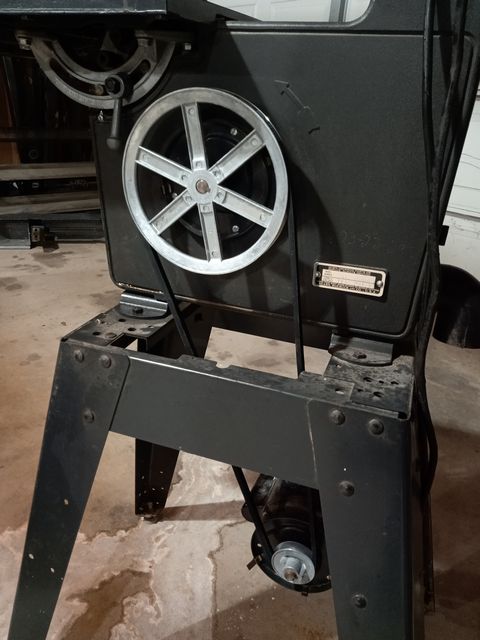 One cheeky change I made though, right after getting it, was re-gearing the saw through its belt drive. It was definitely a wood-cutting bandsaw by intent – there’s only like a 2:1 ratio between the motor and the blade wheels. I changed this to a roughly 4.25:1, halving the blade speed. Once I put a 14 tooth variable-pitch bimetal blade on it, this thing was basically unstoppable in aluminum. I tested cutting a 2″ wide bar through its width (i.e. a 2″ depth of cut) and it was handled admirably. Just can’t do steel on it, since the blade speed is still much too high- I’d have to put a back gear on it or something to be able to cut steels. 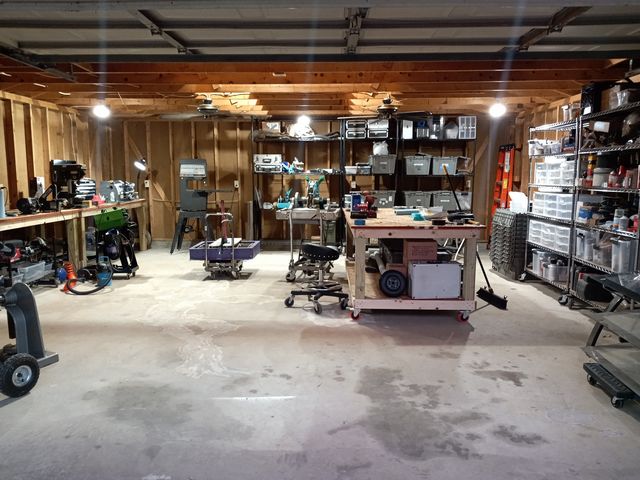 In early February now, and I’ve basically set the space up for Overhaul work. You can see another Craigslist acquisiton to the left – the 3-ton size arbor press. I haven’t given it a permanent home yet, but it just gets clamped to whatever bench I need to smash something on. 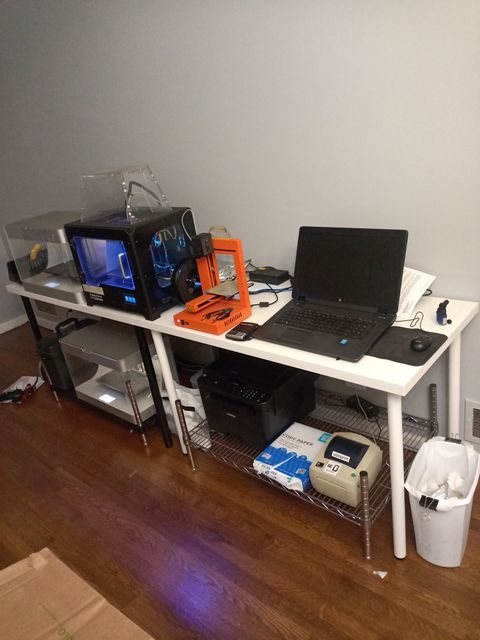 Rewinding a bit back to the week of move-in… one of the first things to go up is the 3D printing station and Equals Zero shipping area. 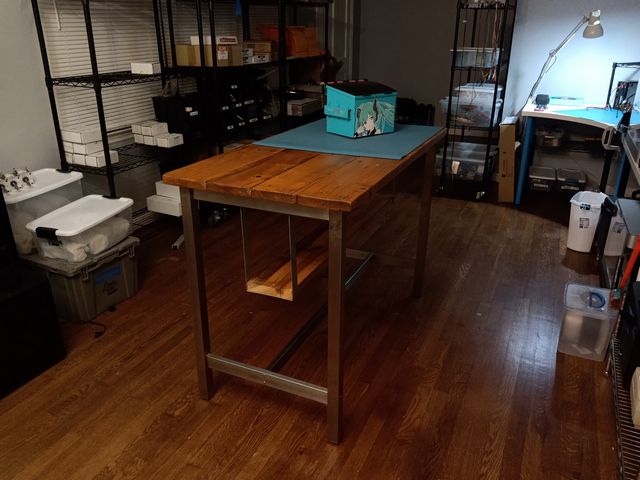 Later on, I found this table on the damn sidewalk while driving home one day through the back residential streets. How quaint! Good thing I only have vehicles that can convey large volumes of stuff. I gave the top a quick sanding and oil coat, and here we are – supplemental shipping/assembly bench or electronics area.

Check out the row of Equals Zero stock shelves in the background. I found a “local minima” price solution that was ordering a certain Home Depot shelf size online (picking up in person) and then ordering a certain set of casters on Amazon. There’s more of these now, actually. 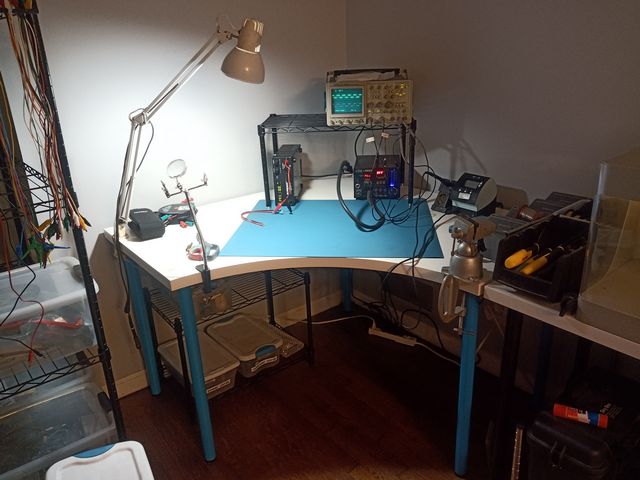 Speaking of which, I also handed Jeff Bezos some money to dress out this corner as an EE station. Hopefully I’ll pick up more instrumentation too, relatively soon! Right now it’s enough to put together Ragebridges and whatnot, which is all I need it for.

Obviously these facilities will evolve as I need them. For now, they’ll carry me through most of the projects I think I’ll get up to, and allow some basic consulting work to happen too. There’s the unfinished basement which is currently very underutilized because it’s not climate controlled and tends to be a bit moist and drafty – not a good environment for 3D printers or electronics. I currently have it just as cold storage, but might move more things there such as the van parts shelf if I end up collecting more tools.  But here we are! Welcome to the #RobotTrapShop.