Here, have an Überclocker kit. That’s it. My job is done and I’m going home. 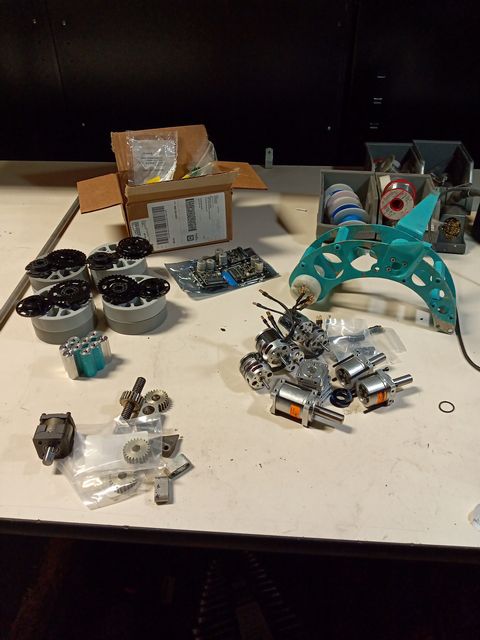 Hah – funny story though. The past 3 generations of Uberclocker were actually ALL sold in the end to other builders. That’s right – before this build, I didn’t possess a single one of them. They were sold in various states of disrepair, of course. But sadly, I have yet to see any of them back in the arena, or face my own follies.

By the last week of September, this was the pile that I’d collected. The last head assembly is just for show – it was a spare made for the previous bot (Uberclocker 4.0) and is damaged in a couple of places. I’d gotten orders in for motors and pulled a couple of other Clocker 4.0 parts out of the organizer. A lot of this will see reuse intentionally. 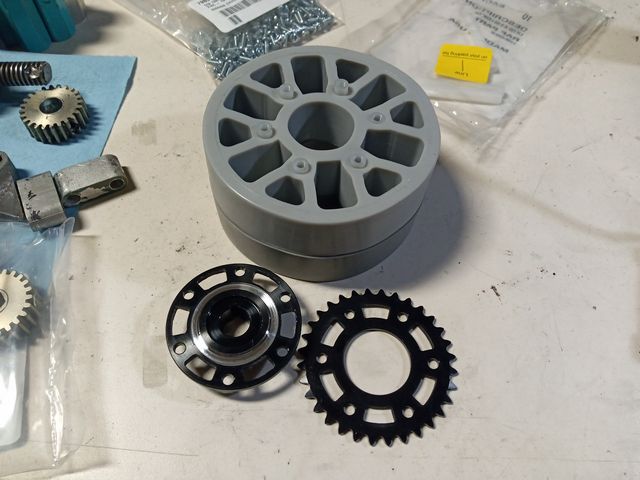 Putting together a wheel assembly revealed that the Vex aluminum Versahub downloadable model is WRONG! It shows up as a flat face on the oberse, but in reality, has a shoulder that is larger than the 1.125″ on the other side. Vex uses 1-1/8″ as the standard because it also happens to be the outer diameter of a Type R8 or FR8 bearing, a very common bearing size.

So I had to turn the short shoulder down to 1.125″ in order for it to actually fit the plate sprocket. No biggie, but hey, update your damn CAD model.

Notice how the wheels are mated together – they have the previously mentioned #8-32 standoffs crammed into them. If I trusted friction enough, there isn’t even a need to have something on the other side. These were rather tough to press through! 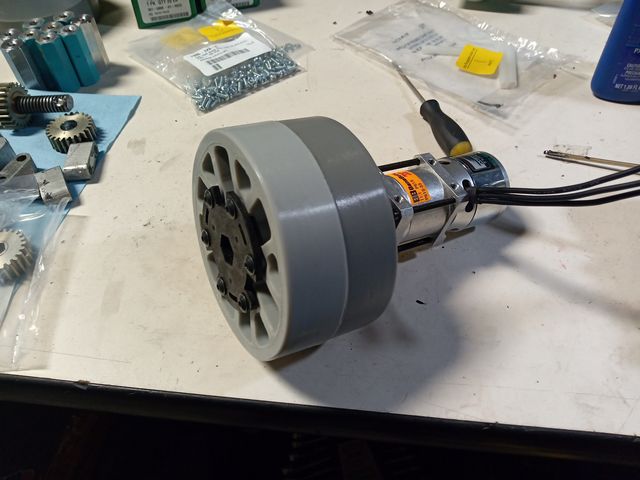 One of the plastic Versahubs caps off the outside here. The whole assembly slips on to the P80 keyed shaft and is retained by the shaft’s end-tap screw hole and spacers.

That’s it. What? I made a drive system that’s one gearbox bolted to one wheel? On purpose? Boy, haven’t done that in a while.

The P61 gearboxes assemble almost directly onto the Sk3-4240 motors using the Mabuchi 775 motor mount kit. The shaft is too long by about 6mm however, so I had to trim all of them with a Dremel disc and cleaned up on the belt sander. 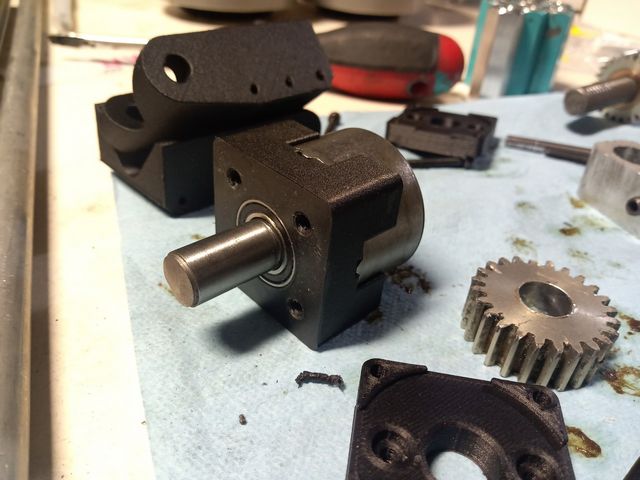 I printed off a couple more of these “Angerboxen” as I call them, which have been a staple of my bots for a few years. They’re based on a design I made all the way back in high school (with less tools) and carried through to bots like 12 O’Clocker, and then a spare motor from that made it into Uberclocker v4.

They’re just repackages of generic single speed drill gearboxes into a 1.5″ square profile, compared with their usual 2″ funny shapes. This will be the first time I cram a brushless motor into them, though. For the sake of convenience and expedience, it’s easier to keep this bot all brushless instead of make room for a brushed Ragebridge. Previously, Uberclocker 4.0 had a DeWut for the lift and a 550 size drill motor for the clamp, so it made sense. 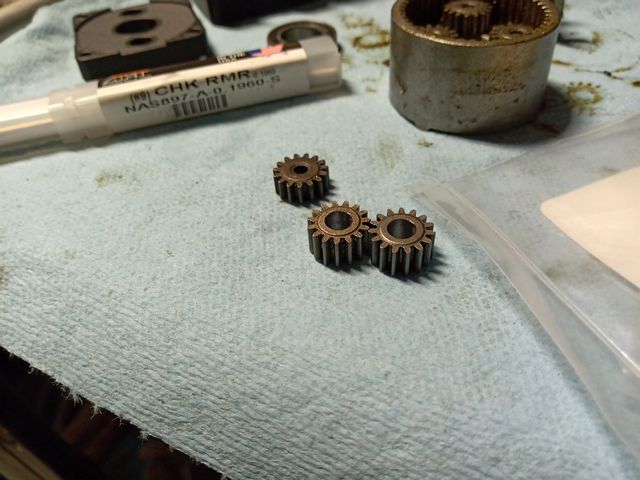 I picked up a 4.95mm reamer to bore out some spare drill pinions (I have a 10 pound bag of loose random cordless drill guts) to turn them into pinions for the SK3 motors. 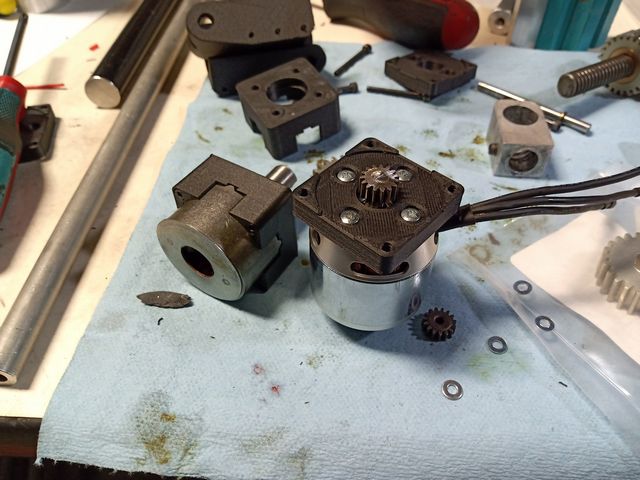 And here it is ready to close up! 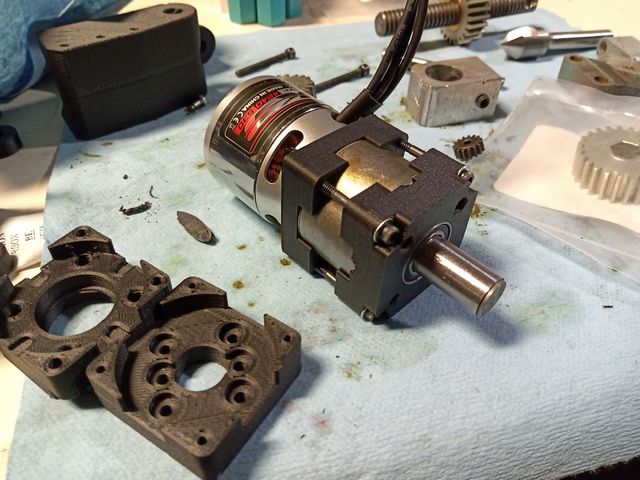 …and a day later, after a quick redesign.

You see,  the SK3-42mm motors are bigger in diameter than a 550-size drill motor. Not by much, but by annoyingly enough that I could not feed one of the threaded tie screws in from the motor side.

I ended up changing the design up to have the tie rods enter from the front, basically making this an ersatz P60/61 gearbox. I mean, at this point there’s no real need to have a custom design and I might as well do an “embedded P61” like Overhaul had the P80 integrated into the clamp motor. But this setup is lighter and already designed in, and it was easy to replicate.

I added a set of 2 smaller holes in the center for a Mabuchi 400 size motor. This faceplate mount is often found in the smaller 28-30mm brushless motors – if weight got out of control, I could quickly drop the motor weight in half by going to one of them. I don’t need the full power of a 42mm brushless on the clamp arm anyway, but it was there and easy. 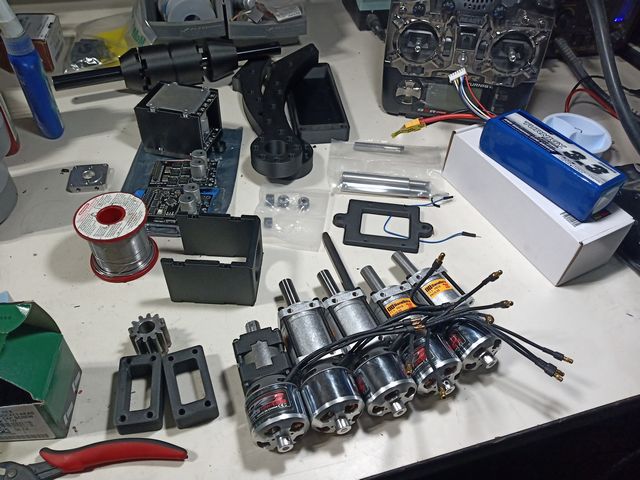 All of the subassemblies and components are starting to come together now. If there’s one thing that 1. Building Overhauls and 2. Doing Massive Drone Startups have taught me, it’s always just pipeline spares if you have the materials on hand. You will need them sooner or later, whether gust of wind or gust of Tombstone. 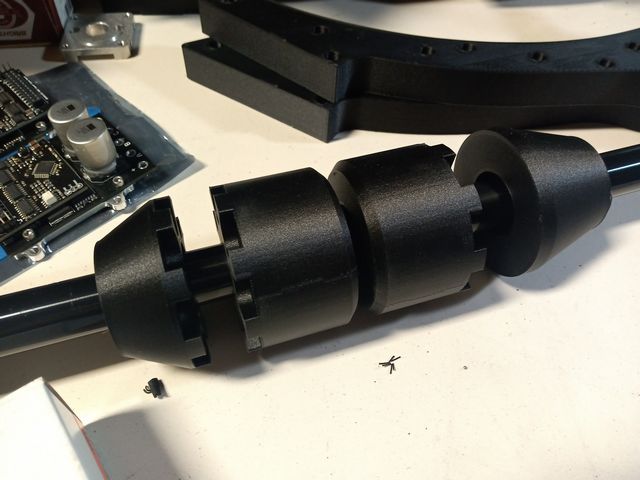 The lift arm shaft, unlike Clocker 4.0, is now a dead axle like Overhaul. I wanted to ensure the less complex box frame had more members to tie it together side to side. Pretty much every Clocker Past has had a live axle to let me easily turn a shaft collar into a torque clutch., but for this one I’m doing it dirty! Shown here are a bunch of spacers to keep the arm elements at the right distance apart. The shaft material is McMaster’s “ceramic coated aluminum” shaft material. Easy to machine, but you have to break the ceramic coating which is actually fairly tough. It will eat regular steel tools, but carbide will defeat it. 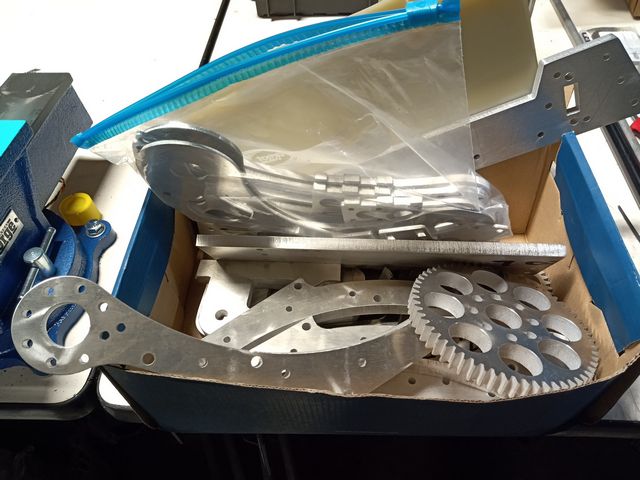 After the first week of October (Well, there goes Franklin Institute), my waterjet parts arrived from a local vendor. I dropped off material the week prior, so an average turnaround time, plus picked up a handful of company parts while I was at it.

This was enough parts for two bots except the frame, which I figured wasn’t going to get trashed at a Sportsman’s Class competition like Robot Ruckus, so I decided to not incur the extra cost and the having to order additional material.  I’ll do this for Motorama instead, where I plan to enter Clocker into the full combat 30s. 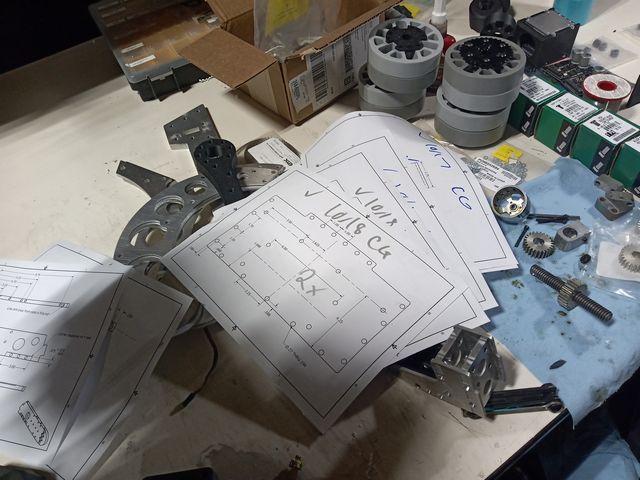 Checking off your own fabrication prints is always satisfying. Maybe just left-over project managment energy in me, but this is definitely my most documented and organized bot in years. Having other people needing to read your thoughts and intentions clearly in mission-critical systems is something I’ve had to get used to in the past 2-3 years, and I most definitely learned a ton from other folks at the company with more extensive industry experience.

I even back-added the “live edits” into the drawing files and annotated the CAD model. Oh, the horror. 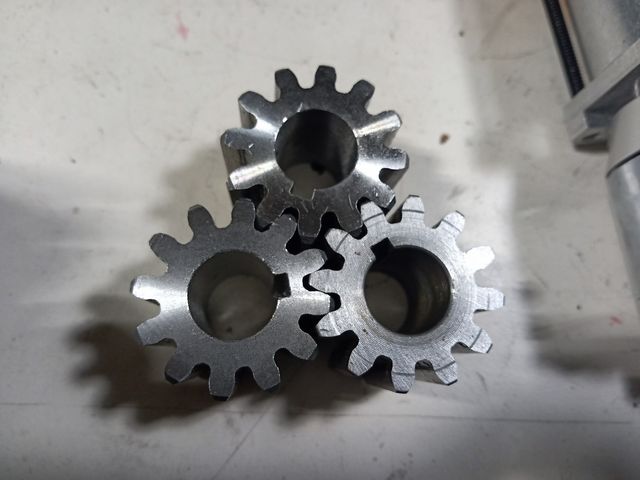 Both Uberclocker and Overhaul make extensive use of these 12 pitch, 12 tooth, 20 degrees P/A stock spur gears. I made a point of just ordering a half dozen and broaching them all, because again, I’ll need these again for OH3.

Anyone ever find it funny when company logos and motivational posters show odd numbers of gears in mutual mesh?

It’s really just a Freudian slip into the culture of the organization. 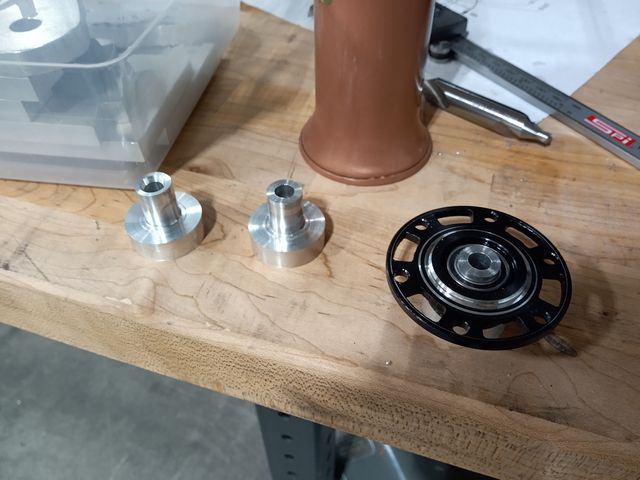 Machined rear axle spindles and a test fit in a hub. The rear hubs are the same Vex aluminum Versahubs, but bored out on both sides and a type R1212 miniature bearing stuffed into the pockets. They’re retained by a big washer at the end of the spindle so will take more effort to peel off than just ripping out a set of tiny bearings. I could have gone for simplicity and done a Delrin bushing too, but a large overhung load onto the relatively short (5/8″ wide) spindles made me leery about added friction under the bending load of the bot. 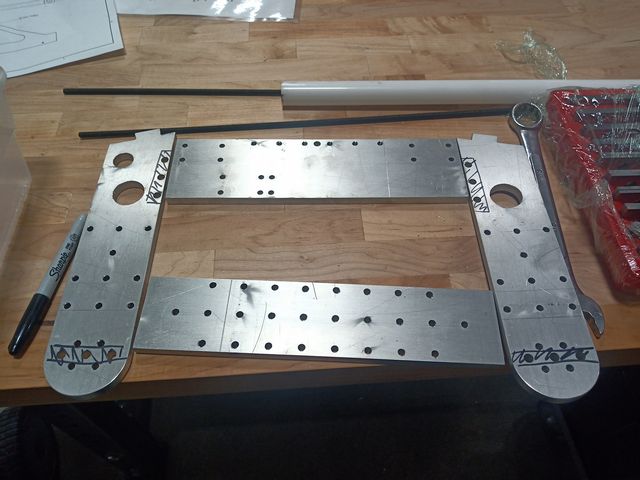 Next up, frame rails that need channelling and pocketing. I knew this was going to end badly for me if I didn’t mark them very clearly. 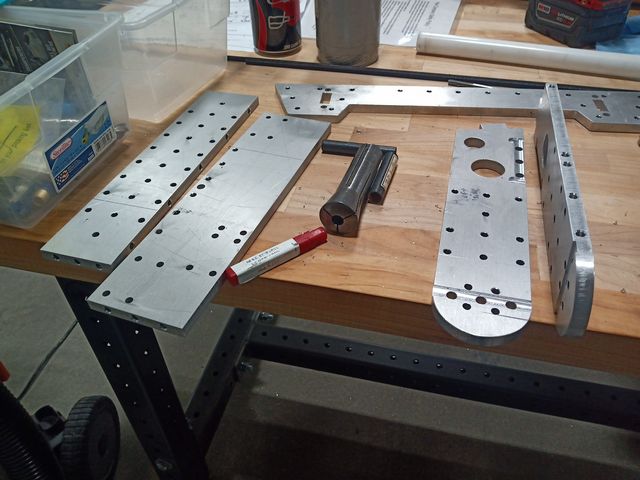 They also needed the top and bottom plate holes drilled and threaded – I set all of them up at once in the mill with the same reference edge and played a bit of paint-by-numbers on which hole has to go where, making something like the world’s most impractically slow subtractive dot-matrix printer. 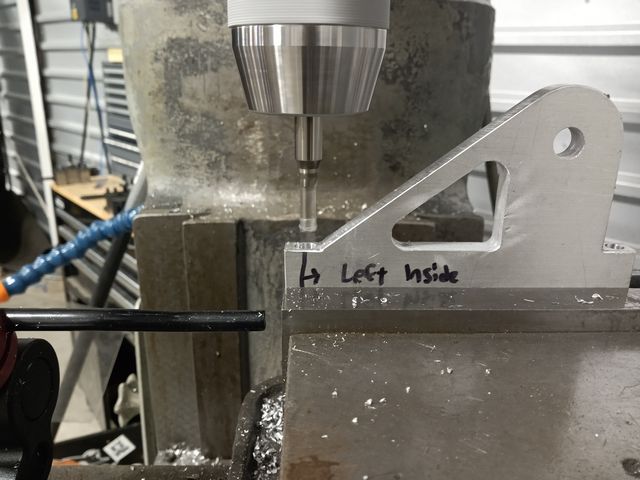 Invitably, I had to bum it up somewhere, and that’s being off by one edge-finder radius on an arm tower. Everyone does this eventually, no matter how veteran! So I had to slot one of the arm towers to let it actually sit where it needed to be. 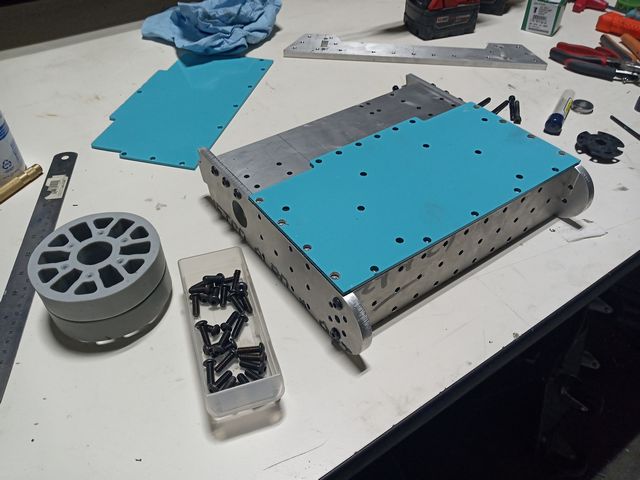 The top and bottom plates are being test fit here. Overall the tolerances were alright, but they do add up, so some of the holes just barely did not align and needed to be step-drilled up a 1/32 in size. I went 1/16″ over as extra future slop insurance. 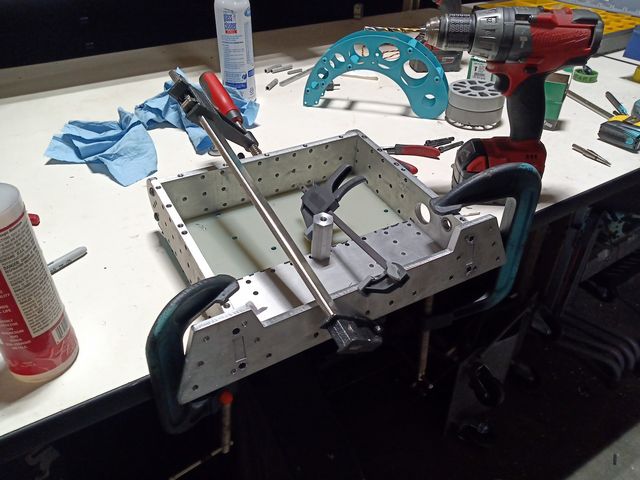 Next, the frame was set up and clamped to the table to perform the drilling / tapping operation of the front bulkhead which was just going to get line-drilled in place. I didn’t feel like tilting the Bridgeport head 15 degrees and doing those coordinate transforms to get to the hole placements this time! Stabbing straight inwards with a drill was going to be all the grace this frame sees. 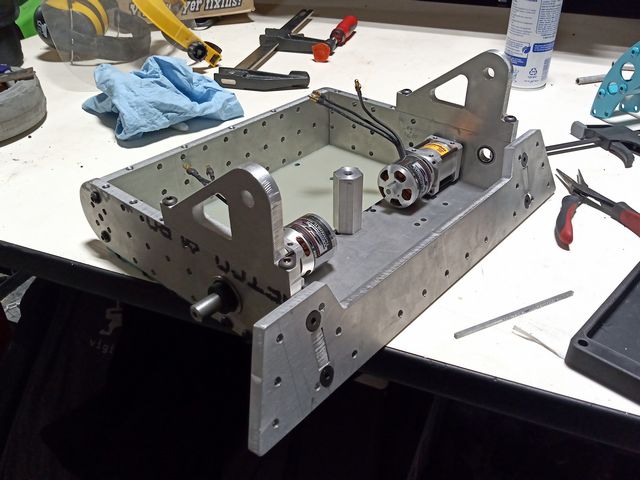 The frame’s now fully assembled. 5 parts for the base and 2 for the arm towers. In some ways, this kind of bulky rail construction is elegant in its own right. Clockers Past have had elaborately puzzled together plate frames with part counts that ranged from 15 to 20 or so, and Overhaul carried that over for version 2. It’s now something I aim to move away from for V3.

Next up: Filling in the other parts of it that make it more robot-shaped.

One thought on “Überclocker 5.0: In Which I Actually Have to Build the Bot, Not Just Talk About It”