Last episode, I had just finished machining and assembling the frame. As I said then, it felt a little wrong. Almost too simple compared to my usual. Well given that’s one of the major directives of this build, and for Overhaul 3, I’d better get used to the feeling. So with the aluminum machining taken care of, it was time to do some welding and final assembly. 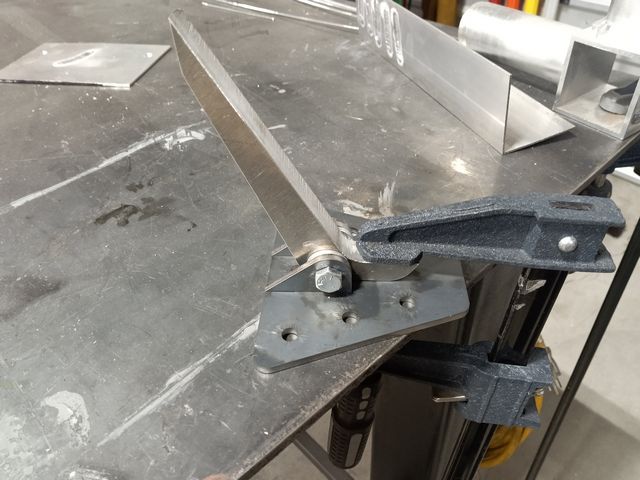 The new leg design is almost 1 for 1 what I want to build for Overhaul. Its armored pontoons were a good idea for some forms of kinetic energy weapon dispersal, but weren’t very good at wedging otherwise. Last season I made the “stiletto” versions for matches where having broad surfaces against the ground would be a liability, but the way it mounted to the bot was still predicated by the angled wubbies. I could adjust their ‘preload’ into the floor with washers, but this was permanent (for the match duration) and they actually would impede the bot’s motion by slightly lifting the front small wheels off the ground. There’s really no substitute for a good set of hinged wedges that will always conform to the floor under gravity. I’d eventually want to redo these plates from an alloy steel like Hardox or good ol’ AR400, but for now, a surplus piece of on-hand 1/8″ cold roll steel works too.

Initial tack welds were laid down the parts as-fixtured, then I’d remove the leg itself and add a dab more weld bead. The design was specified for approximately 4mm gauge AR steel, but using 1/8″ cold roll meant there was a lot of placement slop, so I’d rather fixture as the parts were going to be used. 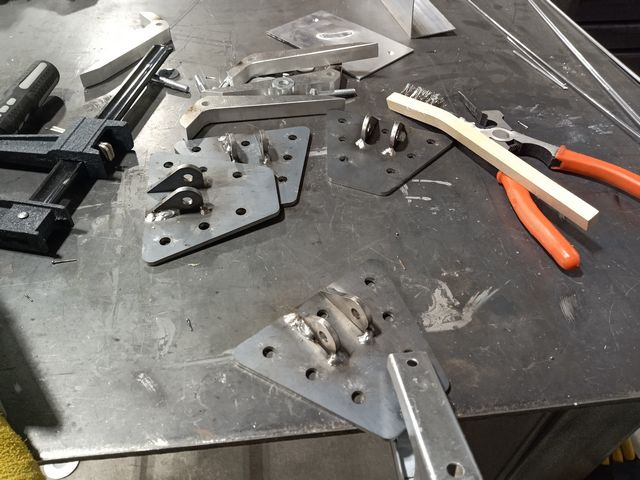 Top side in progress, mostly done. 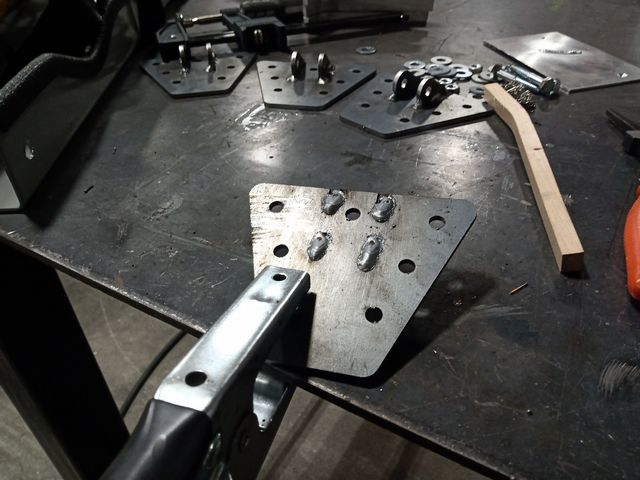 And then backfilled from the underside. I then ground all four undersides smooth, and painted over the legs and mounts in black. 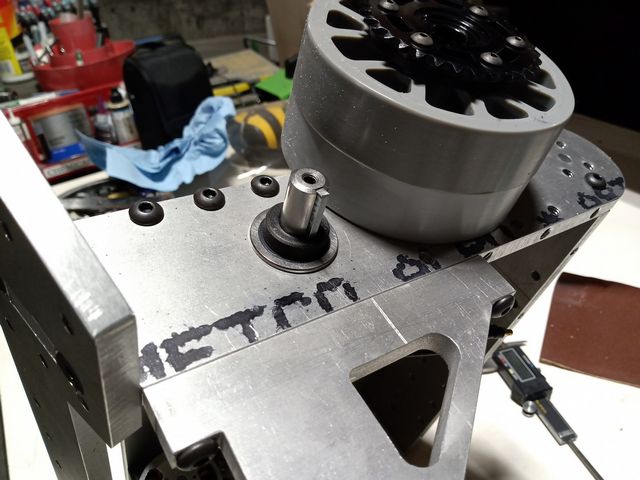 While the various painted parts are all drying, onto assembly work.  There’s a series of little spacers that have to be installed for the wheels to attach at the right distance to clear the drive chains. Not the most elegant approach, perhaps, but one that was workable given the commercial nature of the parts. For Overhaul I’d have custom hubs with the correct spacing already designed in. 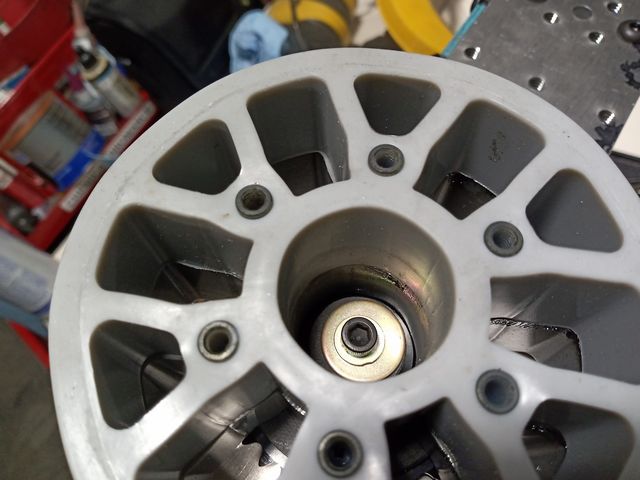 On the inside, a series of washers to hold the hub face on. Another slight point of tack is to put the wheels on, you really need to remove the outer “hubcap” plastic Versahub because otherwise there’s no easy way to line everything up looking through the 1/2″ hex bore. A minor complaint, and really I could just put a plastic circle piece here instead of the Versahub. 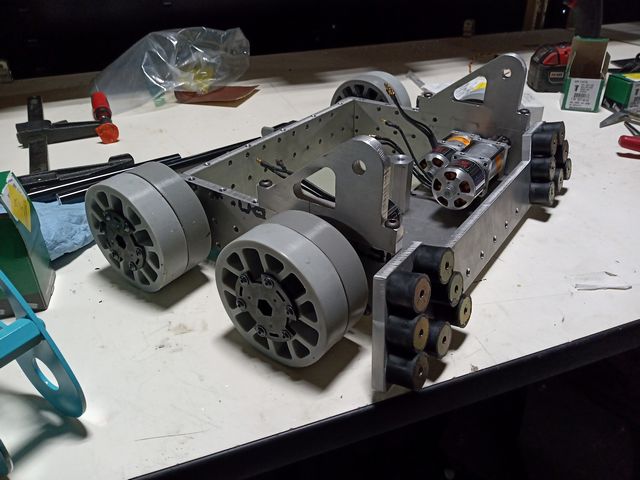 Well, it has wheels now!

The lifter motor is suspended off the lower plate by a large gearbox-shaped spacer. It’s a bit of an overconstraint with a fixed bearing in the frame rail; same with the external bearings on the drive motors. Overhaul will have these be isolated systems with flexible couplings like I have on the existing lifter design. 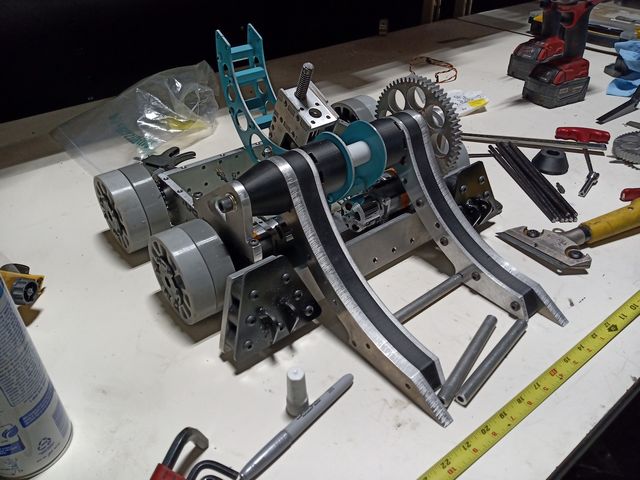 The lifter fork and clamp parts all slide onto the main shaft one by one. The dead shaft does allow this thing to be far more serviceable than Clockers Past. 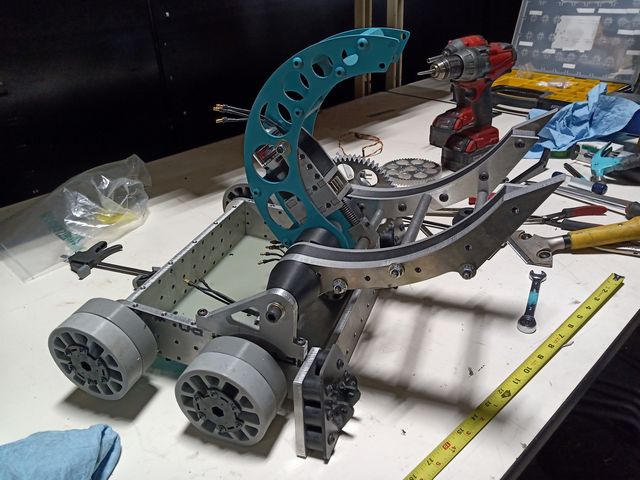 Once the three crossing tie rods and spacers are tightened, the assembly is rock solid. Unlike Clockers Past, the only method of force transmission  from the lift gear side to the “drive” side (right hand) is through those three interspersed tie rods. With the live drive shaft, both forks directly received motor torque. Now, My Calculations Show™ that the rigidity is adequate even picking up a 30lb opponent entirely on the right fork.

Overhaul already has a method of through-transmitting lift motor torque in the form of the big hollow hub the arms sit on, so the considerations there are much different. 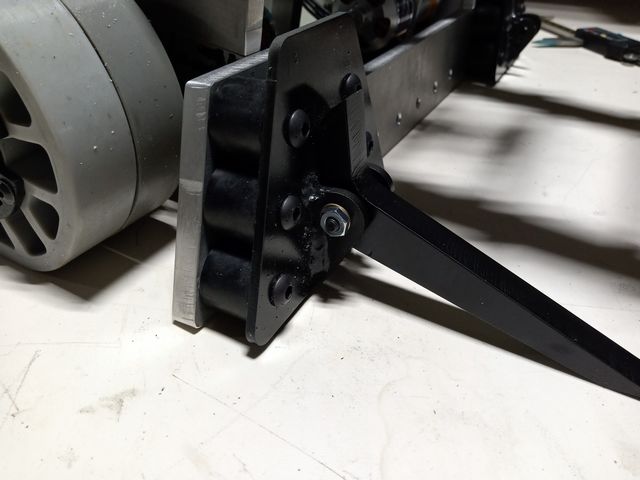 Support legs all installed and tightened. A shoulder screw whose shoulder is the length between the hinge sides gets tightened down, and that’s all. 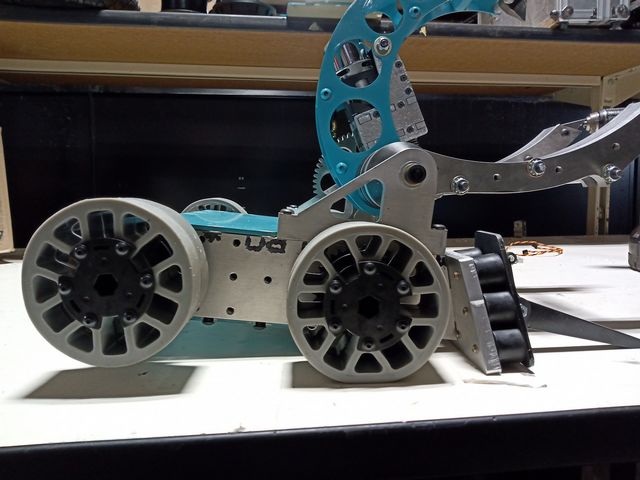 As I expected, this thing is really front heavy. The CAD model doesn’t quiet show it all, even, because it’s a static representation. With nothing in the back, the bot tips forward on its two front wheels immediately.

There will be things in the back, of course, and the final design showed I could possibly have a 3 pound counterweight spanning the back frame rail.  We’ll see how it ends up. I also suspected that the bot will drive very differently depending on how squished the front wheels are (i.e. how much downforce is placed on the arms). 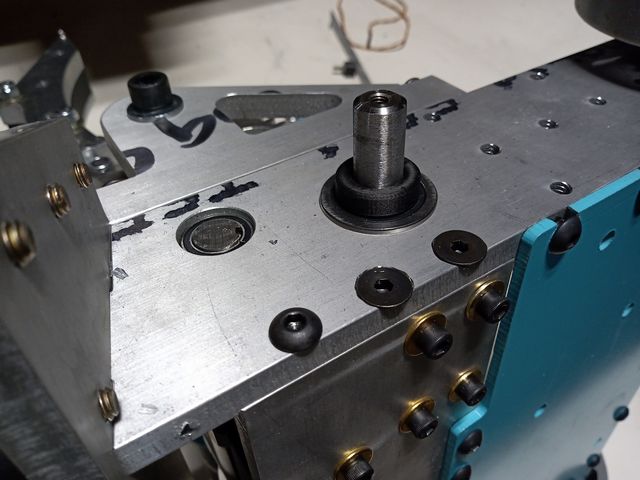 One minor “oh yeah, I modeled that” as I mounted the drive chains: I specified flat-head screws for most of these frame connections, but to do waterjet layout when I wasn’t the one using the machine, I had to make a configuration of each part with the countersink diameters suppressed.

Then I promptly forgot I was supposed to use flathead screws, so installed button heads. This works fine for every place that doesn’t have a chain run next to it, of course, so I didn’t even notice until now. 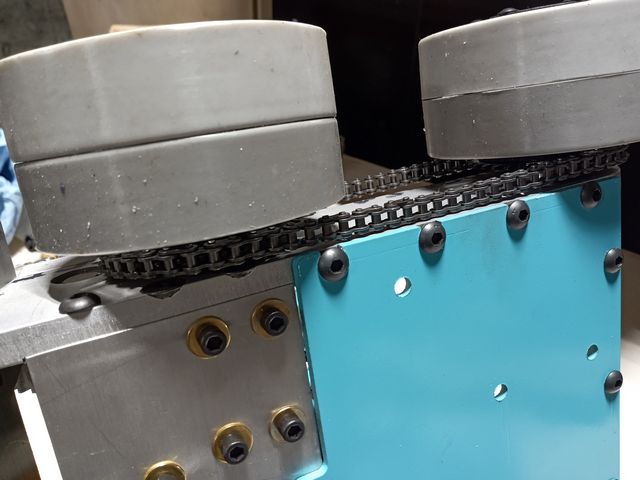 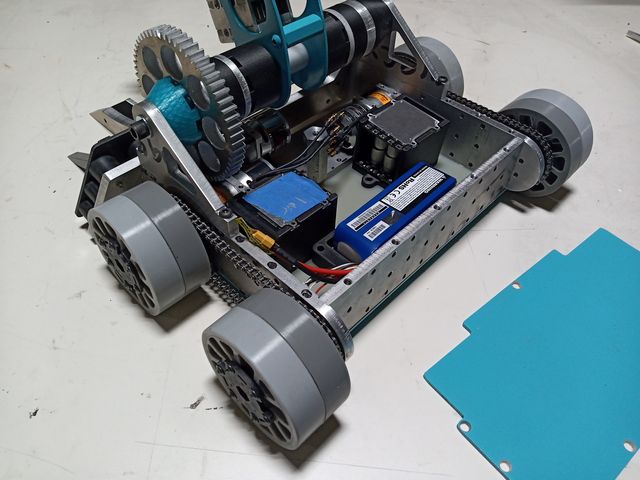 Electronics installation goes quickly, but first, I needed to throw things inside to get wire run distances. 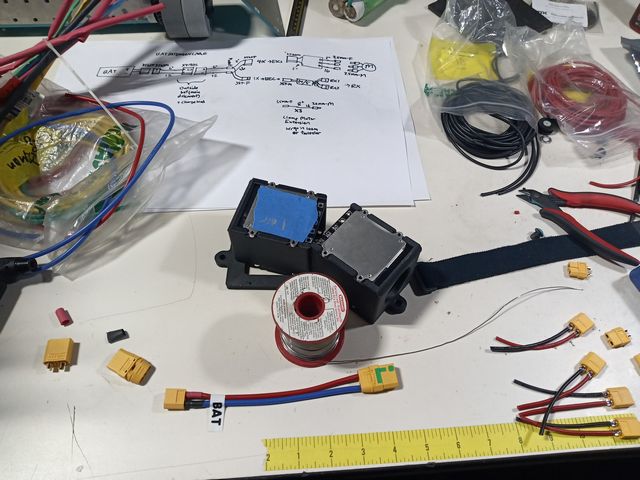 Another “PM Charles” habit I learned and now don’t feel right without: I even created a wiring diagram for this thing with gauges, connections, and lengths before I cut a single piece of sumptuous silicone-insulated ultra-flexible noodle wire. And labeled every cable as I made them.

(As wires get into the multiple-0 gauge, they and their connectors begin getting more and more sumptuous as well as expensive if you fuck it up) 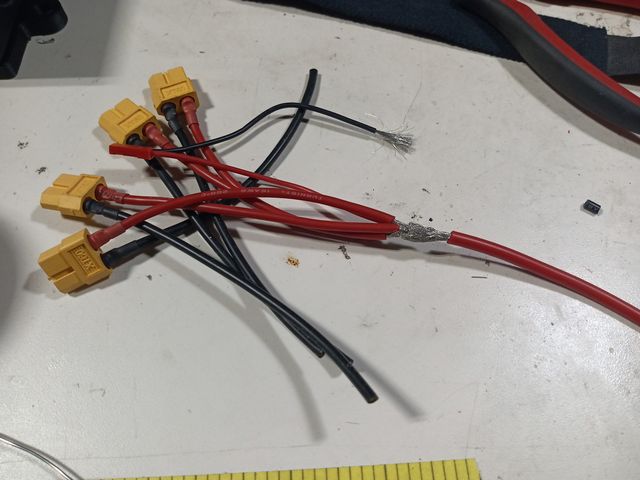 I avoided making something intelligent like Super DEANSBUS and instead just went for the good ol’ Hong Kong Soldered-Shrunken Squid. I only needed four ESCs and an auxiliary connection (for receiver power). 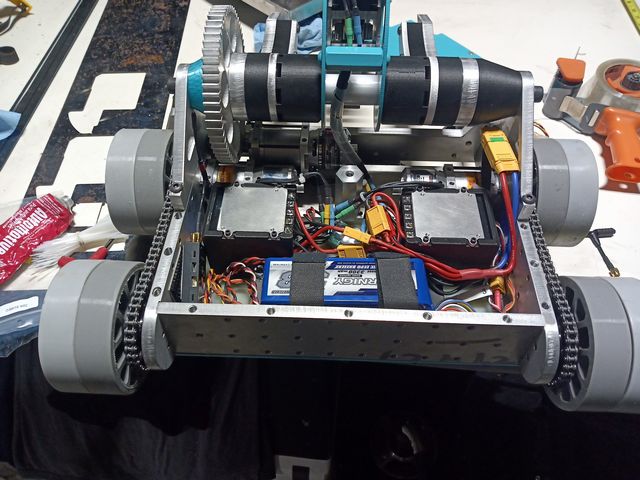 Prepped and ready after a couple more hours of soldering. I’m very much now used to crimp tooling and contact systems used in commercial/industrial connectors. The R/C world really needs a “crimpable bullet connector” of some sort (And I don’t mean these trash-tier things), because solder cup filling for dozens of wires just takes so much manpower. 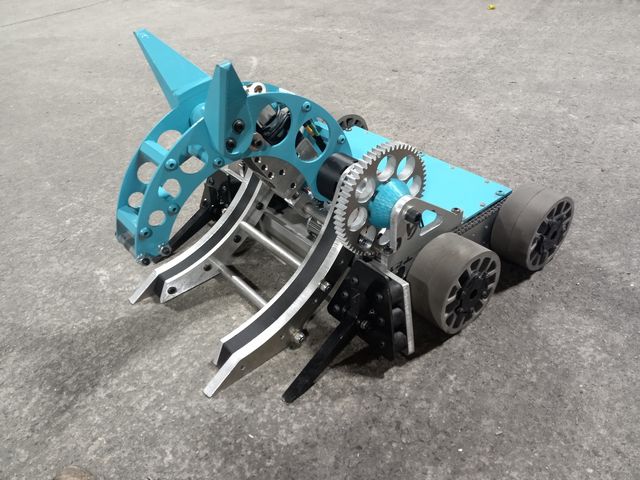 And here it is!

I was very much right when I said it would drive differently depending on if I had the arms down or up. If the arms are raised, the back two wheels basically aren’t there – it drives like a 2WD bot and is almost too squirrely. Overhaul 1 had similar issues, but the long triangular pontoons damped it a lot.

However, if I drop the arms down and preload them into the ground even a little, it will transfer some weight to the back wheels, unsquishing the front wheels just a little. It gains 4WD-like traction, but still puts substantial weight down on the forks. I actually managed to accidentally sand a good mount of the forks off on the bottom driving around in the rough concrete area of the shop.

This is a desired result. If I make sure Overhaul can sink down a good half inch or so in the front when the arms are raised, it means I have a fairly large band where the arms can be down and the bot still retain full traction. OH2.x wasn’t capable of this – the small wheels deformed so little that it propped the front 4 off the ground, making it act like a front-dragging 2WD bot.

On my mind now is a good way to make an easily adjustable travel limiter so I can, if need be, just slam the arms down without having to modulate them carefully. On this bot, if I drive them down too far, I can get it to start behaving like OH2.X – turns become more difficult and less predictable as the rear of the bot is trying to pivot around a drag point in the front. 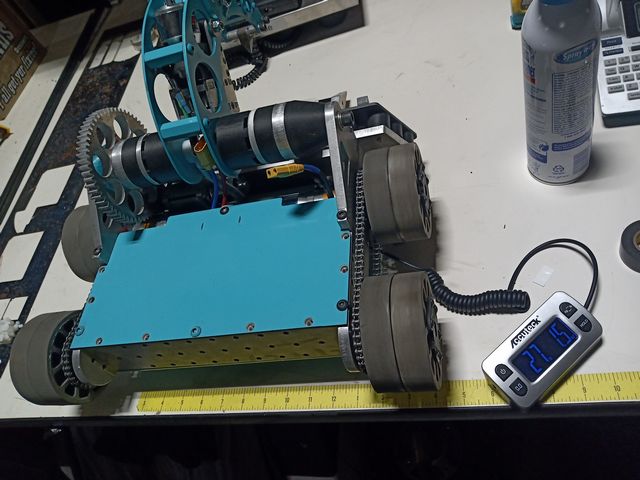 The final weigh-in is pretty much on the money minus the weight of the wires, which I didn’t put in a simulated blob of copper for. The CAD weight was 26.7lb. Looks like either way I’ll have around that 3 pounds to play with to install a counterweight on the back plate!

Stay tuned for some exciting Orlando Maker Faire coverage, where I’ll get to find out if everything is wrong.

2 thoughts on “Überclocker 5: Finishing Up The Everything Else”