I feel like this website has become the Life of Charles, what with real editorials and non-stop round-the-clock van coverage and my tenuous professional aspirations… This is not the man I know. Where has he gone? *looks at own hands*

But now I’m back, with some new developments for Überclocker in preparation for Motorama coming up next week, as well as 12 O’Clocker stories to tell first. This bouncy little thing has been going to events and demos since 2013 with hardly any changes – just switching motors, basically. It’s gotten sufficiently worn down to a stub in the past few months that I decided to do a full teardown rebuild with some new parts!

To tell this story, we go back to the dark days of MassDestruction #5, like 3 months ago… Wait, CAN YOU BELIEVE THERE’S BEEN 5 OF THESE THINGS ALREADY? please take me back greg ;~;

This MassD, I took a more organizational role, helping judge and run matches. However, this didn’t prevent me from putting 12 O’Clocker (at the time, my only working bot -_-) into the arena in the somewhat informal 12lb Sportsman’s Class, where pretty neat matches like this occurred. MassDestruction has become a popular regional attraction; word has gotten out, and we pretty much filled out the Artisans’ Asylum event room to capacity. Like, look at this photo. 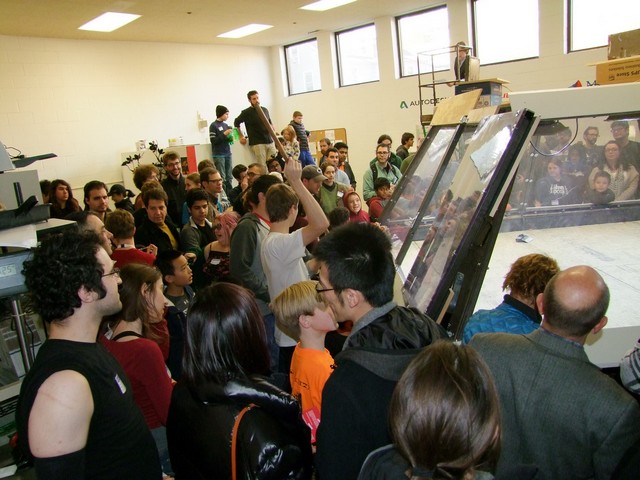 This is “filming a music video using the flashmob mosh pit at your post-phlegmpunk band’s free unannounced concert” level stuff. What’s better is that the builder population is getting more and more towards being newbie-dominated. This is a great problem to have.

12 O’Clocker came in 2nd place (out of like….3?) at this event, which was great, but it did take some damage. For the deterioriating ABS motor mounts that retained the lift motor finally gave out completely, wrenching the drill casing apart under its own torque: 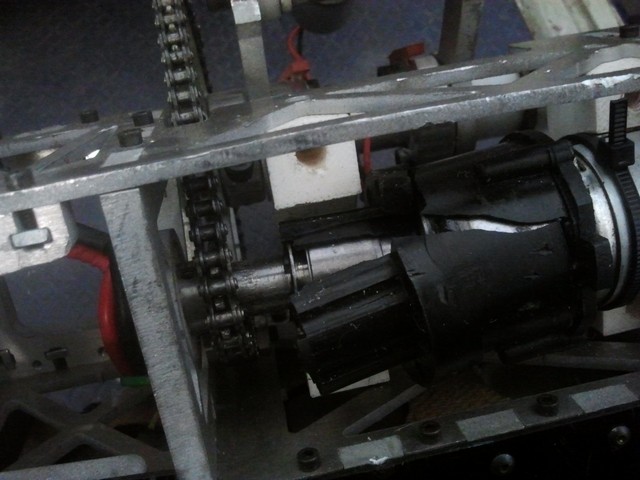 Oooooh, that’s not good. I finished the tournament using a found drill motor given to me by an Artisans’ member, unceremoniously hot glue MIG-welded into the remaining mounting block pieces. At some point in the final against Snek Plissken, I also lost the lift motors which turned out to be one of the logic capacitors on the old RageBridge 1 units in 12 O’Clocker just breaking off the board. I also ended up demolishing another motor pinion just like at Momocon; the most recent set of motors for 12 O’Clocker came from some 12V Ryobi drill motors, and it seems like they were not up to the task of being run at ~20 volts.

Fast forward another 2 months, and MassDestruction the SIXTH! was on the horizon.  With the promise of more rematches with Alex Horne’s not-Sewer-Snake, I decided on a quick tuneup by replacing the broken ABS lift motor mounts with MarkForged Onyx prints because of course I did. New drive motors were also on the docket. 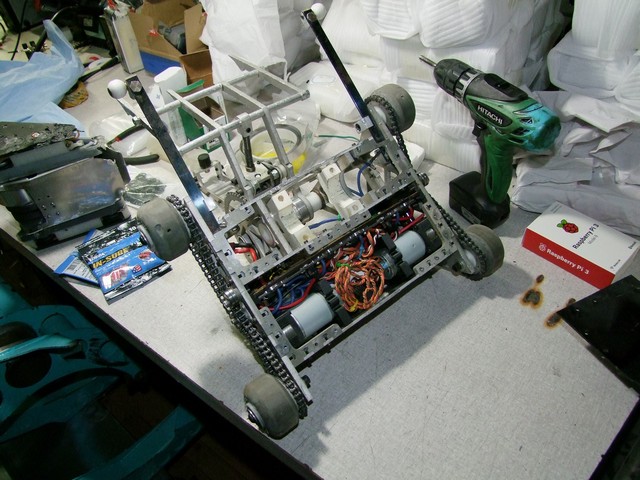 The Rage Panel slides out from the bottom, so I took the bottom plate off, which also let me do a hardware inspection on parts of the bot I rarely touch after finishing. This level of surgery was also needed to finally detach those ABS blocks.

So new drive motors were a bit of a conundrum. When 12 O’Clocker was built, it was still common to find generic cordless drill motors with 9-tooth pinion gears and 36:1 reduction (two 6:1 stages, 9 tooth sun, 18 tooth planets, and 45 tooth ring) gearboxes. Nowadays, it’s almost impossible to find these kinds of gearboxes, with 24:1 being the most common such as being found in all of the Harbor Freight 18v drills and most other rebrands. The 24:1 boxes have a 4:1 first stage using a 15 tooth pinion.

Trouble is, 12 O’Clocker was already geared to go fast, and dropping the gear ratio another 50% would have made it impractically fast and probably burnt out the motors in short order. Those Ryobi drill motors that I kept slipping the pinion on were attempts to find more 9-tooth motor pinions to fit the existing gearboxes. 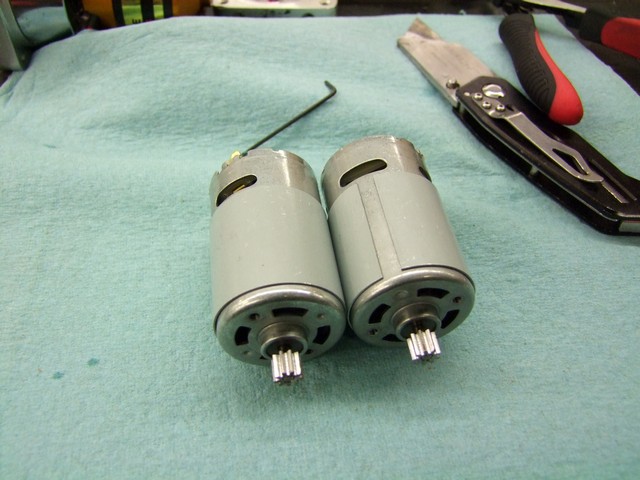 After some haunting online, I found that one of my usual Amazon suspects uxcell sold 18v rated 550-sized motors with steel pinions already installed. Well imagine that, a prepared artificially flavored drill motor!  So I got a bunch to play with. They certainly look like 550-size motors and quack like them. The cans are a little thin, pretty typical of a mature Chinese genericized product… I can pick them up with a screwdriver. Every possible area of cost cutting has been well optimized!  The bronze shaft bearings obviously have no oil in them, since they are a little rattly, but a drop of motor oil in each solved that.

What I did notice was that the pinions’ press fits weren’t that tight. It was actually easy to undo them with a flat-blade screwdriver alone. To pre-emptively avoid embarrassing public gear slips, I took the pinions off and repressed them with a healthy dose of lime-flavored Loctite.

You know what – I’m just all giddy at the fact that they’re motor-shaped at all. 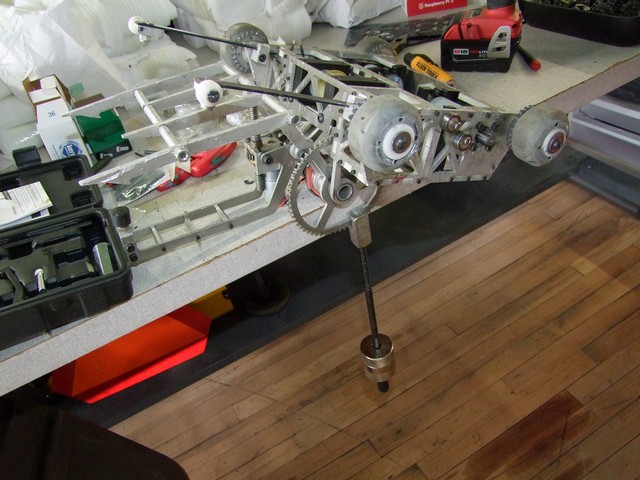 At some point in one of its tournaments, 12 O’Clocker either fell off a Dragon Con stage and landed on its main sprocket, or I got beaned by some flying robot, because the sprocket developed a flat spot which caused the chain tension to vary cyclically, leading to some lost chain moments.

In a moment of either desperation or brilliance, I decided to use my Harbor Freight slide hammer kit with a hook end to pull the sprocket rim back out like you would pound a very reticient dent. I bought this originally for van repair, but it looks like it works for robot dent pulling too! 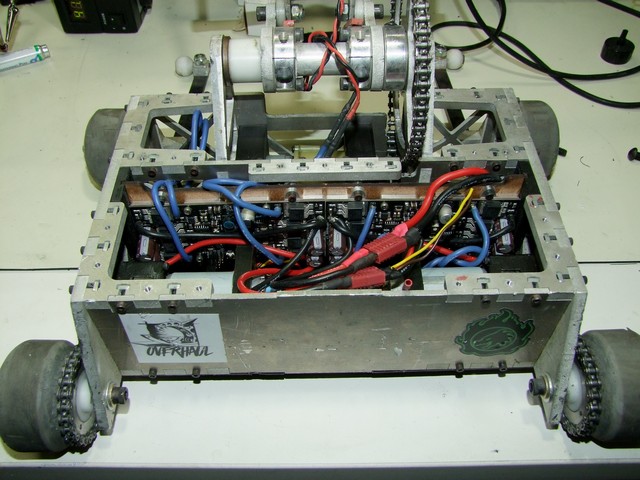 Putting things back together, sans battery. The Ragebridge 1 with the missing capacitor had that repaired; the capacitor ripped out a logic power trace when it fell off, so it just turned the controller off. All the caps were securely Goop’d in place after the replacement surgery. If you’re using a Rage or a Rage 2, you should do this just in case also. 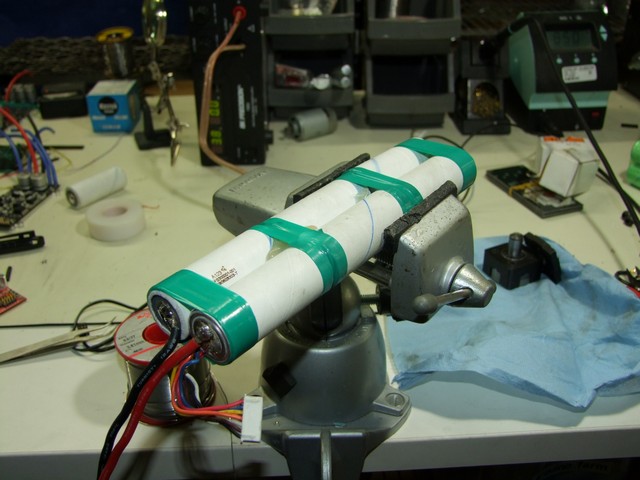 The biggest problem plaguing 12 O’Clocker was its battery, which I balanced once in 2013 and never again since. The cells had drifted far enough apart since then such that two of them flatlined at MassD #5, and I could no longer revive them. This meant I had to cut the battery open and undo the cell joints to the point where I could pull the two dead cells out and replace them with fresh cells. I closed the battery up again after this replacement (the green tape is new and covers the modded solder joints) with some thicker heat shrink, and making my charger do 5 overnight balance-charge-to-discharge cycles evened the cells out. 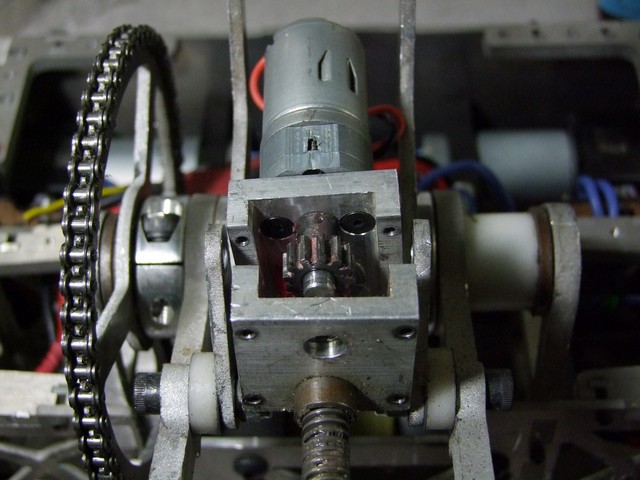 One last mod before MassD #6 was the permanent resolution of the clamp motor coming loose. The threads in the face of these Pololu 25D HP motors had completely stripped, so the motor was really just holding on by the electroweak interaction at the end. To remedy this quickly, I just took the faceplate off, slammed a #6-32 tap through them both, and then countersunk the original mounting holes in my actuator body. #zerosigmas is best Sigmas!

If you use these motors, or any of the similar motors from Servocity or Kitbots (or the straight shit from eBay), make sure to also take the motor off, clean the area, and use blue Loctite or similar threadlocker on the reassembly path. The motor does like to also wiggle loose – this is what the “battle hardening” mod offered by Kitbots helps prevent. 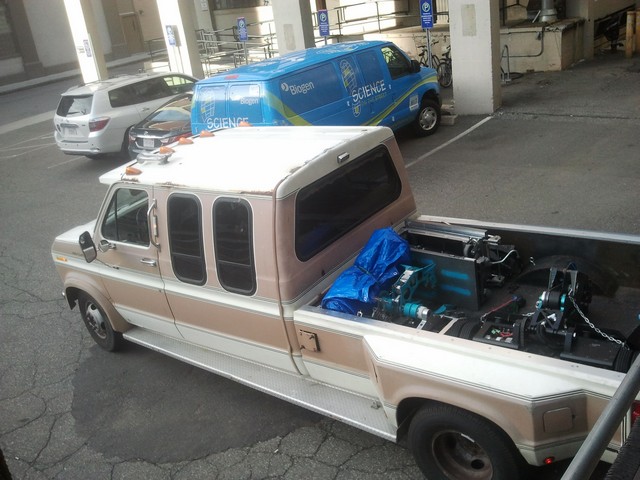 literally all the robots

This is what I trained for.

That’s Overhaul, Sawblaze, and two lift carts in the back. With space for another smaller heavyweight, or a dozen 30lbers and tools & equipment. And probably like 27 people. Some times it’s nice to just bring the U.S.S. ＢＲＯＷＮ Ｃ． ＳＴＥＮＮＩＳ to an event. 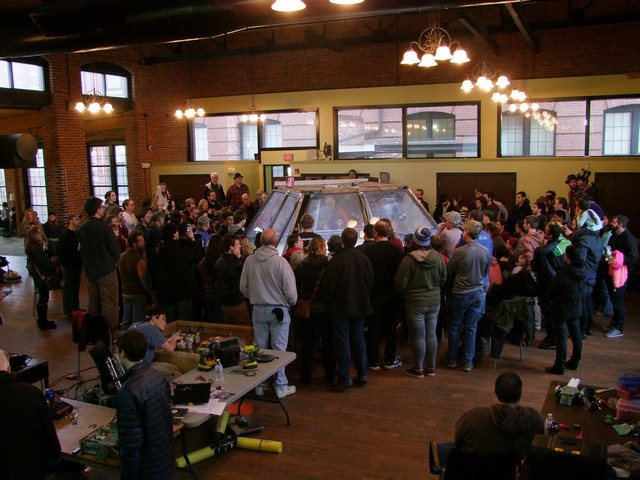 This time, the event was held at the Charles River Museum of Industry, in one of their large event rooms. I once again helped with event logistics including box setup and judging. Overhaul and Sawblaze were brought along for visual stimulation, which was unfortunately because the event room has neither loading dock nor wheelchair ramp, and was, of course, a New England First Floor – 6 feet up the stairs.

Running 12 O’Clocker – especially when things started breaking – and half a robot show at the same time was a unique and singular experience. I will never do it again.

The match against Don’t Step on Snek, a.k.a Snek Plissken, a.k.a Sewer Snek… god dammit Alex, pick a name already!

By this point, 12 O’Clocker had lost basically all of its forks. They finally reached their fatigue limit at this event, one by one breaking off, until I had basically a big spatula. In the match prior, the right side motor pinion slipped its press fit as I had feared, so I went into the final match (also against Alex) one-motored. Which is fine, since Alex at this point had also started to run out of motors. The finals match was such a headdesking, facepalming occasion that I’m not even going to bother finding a video. 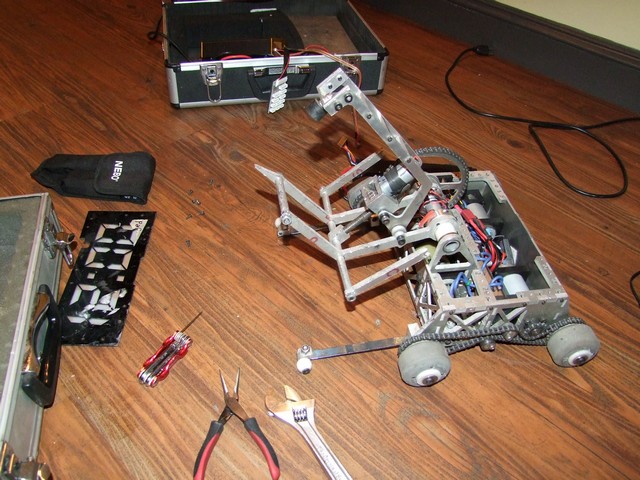 Poor 12 O’Clocker before the finals with the forks arranged the best I can, so SOMETHING AT ALL is still sticking out ):

Well, that’s it for the event. I broke the damn thing so much that I felt like I might as well use the momentum of the event to make spare parts. As I needed to also waterjet-cut spares for Überclocker, I threw on replacement forks for 12 O’Clocker in the same run. 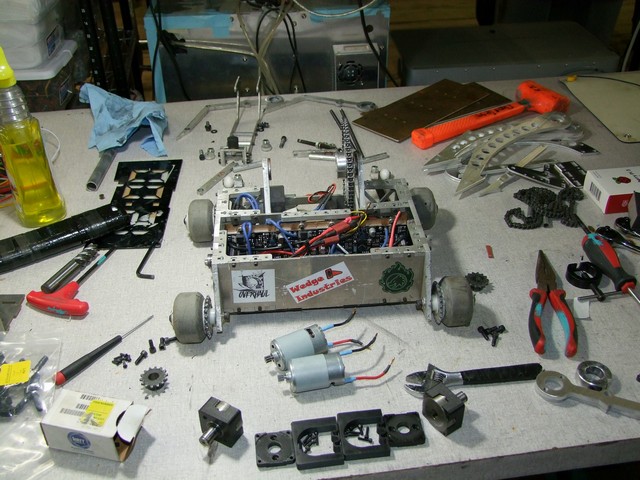 Tearing down the bot completely up front to replace the fork components! This is where I discovered that despite my best attempts at anti-seize grease usage, the lift sprocket’s hub had galled onto the aluminum tube shaft, so the slide hammer was needed again just to break those two apart. I reamed all the shaft collars out again and cleaned up the aluminum shaft surface. This time, I tightened all the collars as much as I could – no longer relying on clutching the lift sprocket for torque limitng, but just setting the RageBridge current limit low enough that running into itself will not cause problems.

The new forks are slightly modified from the current design by adding more meat to the areas where the tie rods pass through. This was previously where they broke, so I made sure to add at least a majority of the cross-sectional area found in the rest of the fork.

By the way, this tube-removing service is also a problem with Clocker, especially after everything got twanged far up its own ass at the Franklin Institute event. I’m going to reconsider using a live shaft with shaft collar hubs to the forks for this reason, possibly considering a more Overhaul-like tie rod and central hub approach. Otherwise, I’m going to make an attachment for the slide hammer specifically for this purpose! 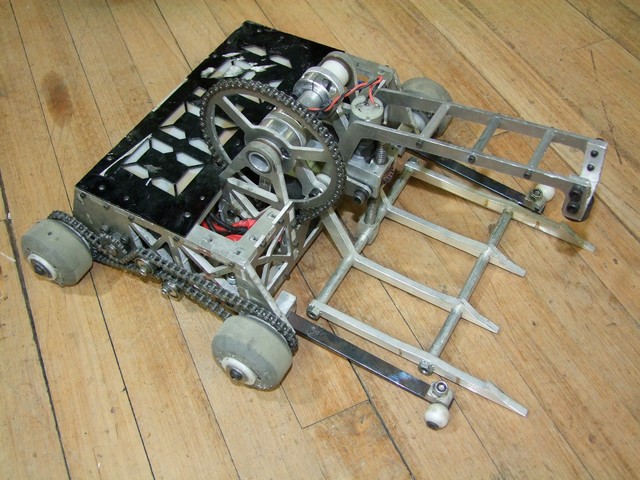 And here’s the refreshed 12 O’Clocker! Hopefully a staple of many demos to come.

3 thoughts on “12 O’Clocker & MassDestruction 6: Where I Rebuild a Bot After the Event is Done”