I’ve been doing a lot of these posts lately, it seems. Just last year, after departing my shopmaster/instructor position with MIT and hence no longer having a workspace there, I moved in to the Artisan’s Asylum, a local makerspace (which also happens to be the largest makerspace in the USA, founded and run for a while by the now creator of MegaBots). Now, barely over one year later, I’ve moved out again… 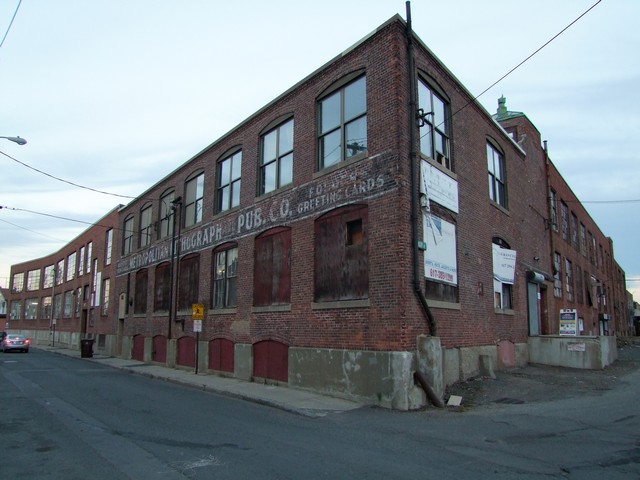 …into something I can finally call “the shop”. God damn, remember when companies had REAL NAMES that didn’t sound like a syllable uttered while asphyxiating a small animal?

It’s about fuckin’ time. The hankering for workspace had reached a crescendo over the past few months between myself and Adam, my long-time partner in hood rat stuff & bad things, also now captain of Team Brutus. My recent contract projects have been bringing me newer, more interesting, and most importantly BIGGER work, and facing the prospect of having to also work on Overhaul again in a few short months (#season3), Artisans was becoming impossible. On the other hand, Adam has simply been making do without a permanent base camp for a while. Given both our proclivities and the rapidly rising prices in the area, it was another now-or-never scenario. 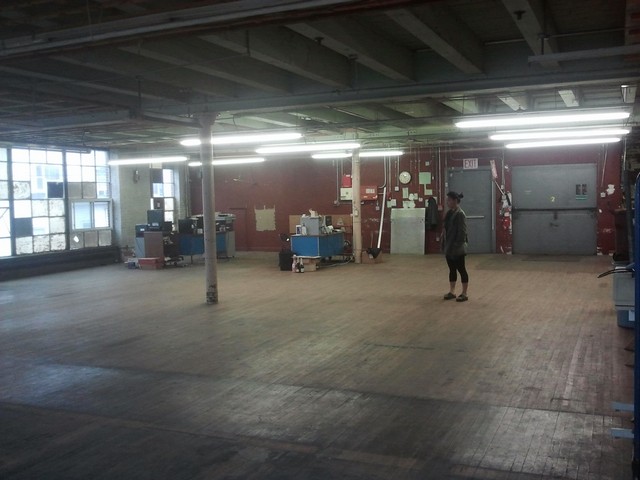 The building: a former clothing & sportswear factory which the company sold to new owners intent on eventually developing it into MOTHERFUCKIN’ CONDOS. DO YOU PEOPLE NOT. HAVE. ENOUGH. CONDOS AROUND HERE OR SOMETHING? I digress. In the mean time, which means the next few years as they figure out exactly how ugly to make the new block o’ flats (that building being my local benchmark for ugly as fuck and overpriced construction) they’ve divided up the former factory floor into a few smaller parcels to function as rentable studios or offices, one of which fell into our lap. You can tell I really love the new property development trend in this area.

It’s on a typical “New England First Floor” – which means floor 1.5, with the basement halfway down. and us halfway up. So, no driving vans in, but direct freight elevator access to a real loading dock 6 feet below. In other words, just enough to be a pain in the ass and just good enough otherwise for me to deal, as the world likes it. The inside is stupendously large for both of us who have been conditioned to think that working butt-to-butt in a shared shop with Isaiah the Last Indie Wirebender is natural and acceptable. Nothing against you wire art, Isaiah, but my robots have tried to consume your workpieces several times while I was machining, and they’re really reaching their rebellious stage lately, so it’s better for both of us.

It’s ~2,300 square feet when finished – shown above is pre-construction of interior walls – putting it right about the size of MITERS. The multi-layered heavy wooden factory floor is finished in a classic “Inconsistently Leaking Machine” fashion sure to fetch thousands of hipster Bitcoins per month in the future when it becomes someone’s hotbox closet floor ,because weed is gonna be legal real soon now in Massachusetts! Oops… I mean #MakeAmericaStonedAgain-chusetts 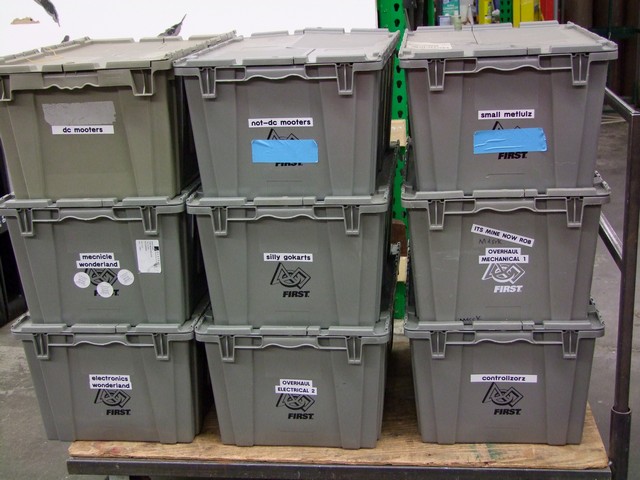 With the beginning of the new shop space, so shall my Artisan’s Asylum presence come to a close. Luckily, most of my life is containerized. Not only did I count on having to move relatively often, as long as I didn’t own the whole damn block I was working in, but having stuff in nicely labeled containers appeals to my inner Jamie Hyneman greatly.  I bought a dozen more totey-bins (which by the way are called ALCs, or Attached-Lid Containers, but searching TOTEY-BIN returns the correct result on Google Images!) to more finely divide some of my parts since they would otherwise get too heavy.

By the way, it’s been physically verified that Mikuvan can contain 24 of these things – 26 if I use up the front seat. 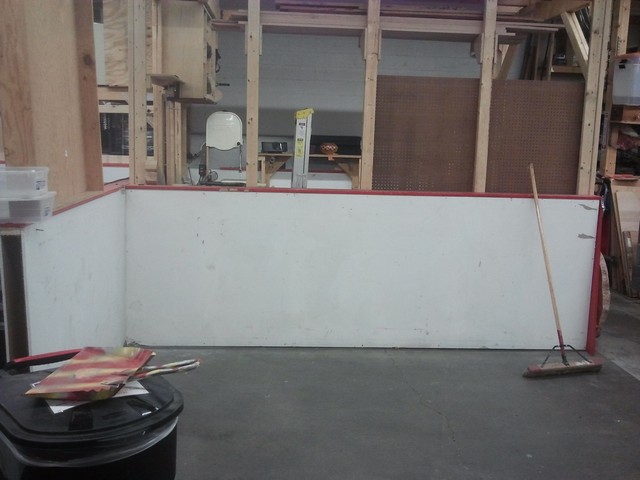 As with moving out of any space or building or home, taking a look back once you’ve restored it to the condition you found it is a little somber. Alas, great adventures lie ahead! Onwards, through the skies, and across the seas… also over a few curbs, because 26ft box truck. You know what? Driving a truck in Cambridge ain’t so bad! You just BIG your way everywhere you want to go! Want to turn left? FUCK YOU! Want to merge onto Route 28 during rush hour? FUCK YOU TOO!  Uber driver? FUCK YOU SPECIFICALLY IN THIS FASHION! 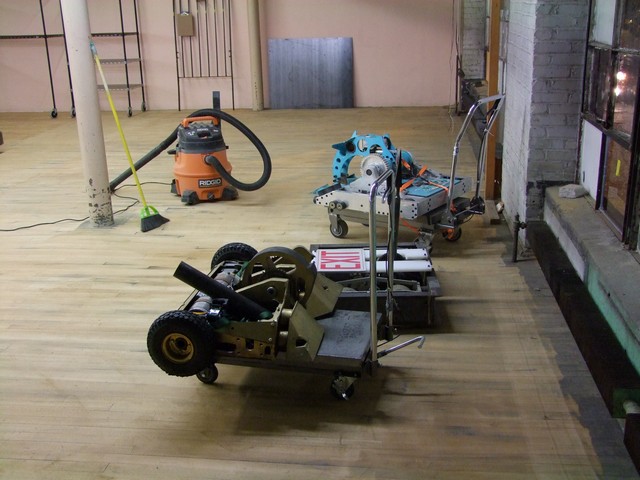 The robots in their new homes, free to frolick in the open pasture… oh, none of them currently work? That’s too bad. 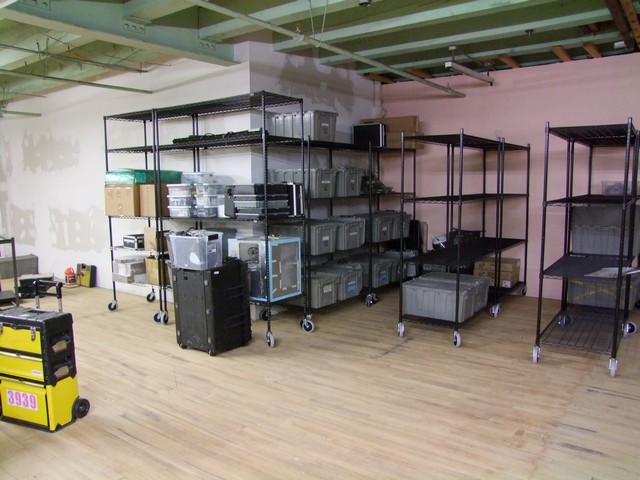 I picked a convex corner to slowly grow out of. While we have a “space plan” this is the two of us we’re talking about here, so everything is really coming together somewhat organically as needed, so long as it is vaguely understood to resemble some plan, if interpreted selectively. In other words, #yolo.

My former “workbench” at Artisans is made of a 60″ wide wire shelf, and it will become the new 3D printer farm and shipping center for Equals Zero Designs. Not shown here is a collection of Craigslist workbenches that appeared in the space some time later in the week. 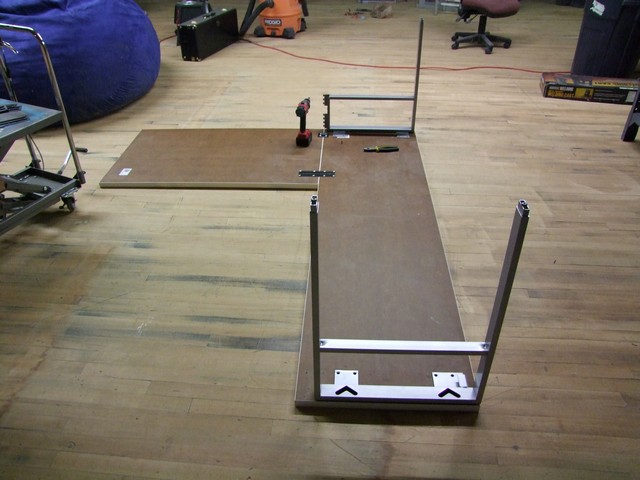 As luck would have it, the IDC was getting rid of its original-issue fixed desks and cubicles to make space for more researchers. The large office desks that were a familiar sight in my build reports from 2012 onwards were going to get replaced with smaller, more portable tables. So what’s gonna happen to them?

They end up with me again. The corner I was in was the first to get cleared. While the desks were taken apart and shuffled, there is a very high chance that my former IDC desk is now in our new shop, another somewhat fitting and poetic closing of one of life’s little loops. 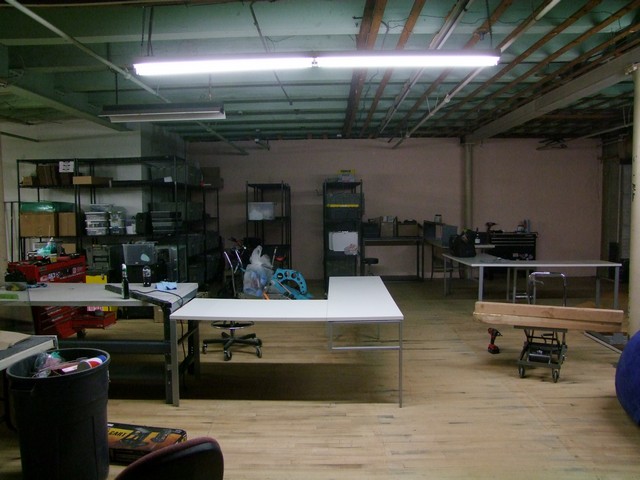 A photo taken later in the week of moving when the benches have been arranged and the IDC tables have been erected again. Notice that they’re a little crooked. They did depend on the cubicle divider walls for structure, which were not part of the deal. I might add some additional legs or some bracing to the desk later. However, for seriously heavy-duty work like “I am putting my laptop computer here”, along with EE work, they’re fine as-is. In fact, the widthwise span has already been set up as my EE bench as of the now.

Charlesland fades into Bercustan as you move rightwards above, with the border lying somewhere on a 3D surface defined by the location of the last series of hand tools we borrowed from each other. I’m going to build a wall of lipo batteries soon and make Adam pay for it.

Now, no new workspace that we have anything to do with is complete without…. 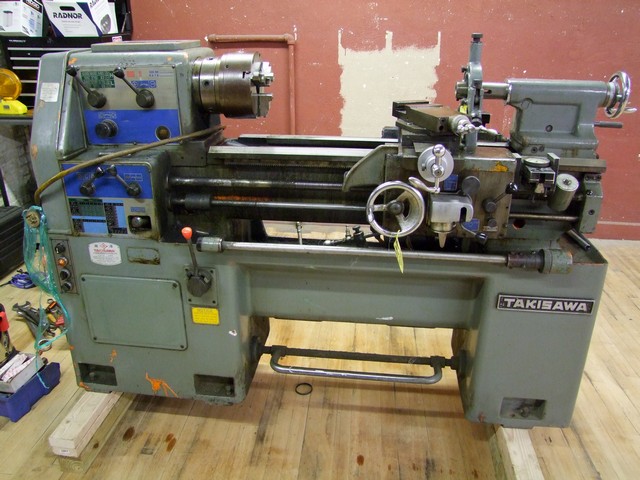 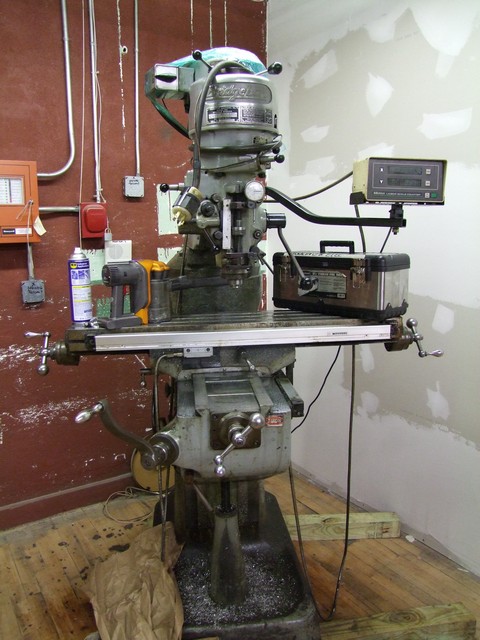 Oh my god. Holy Megabutts. What is this? Did I just buy a LATHE AND A MILL? Not even a Tinylathe and Tinymill!  A honest-to-Baby-Robot-Jesus Brigeport Series 1, and a Takisawa 14 x 30 TSL-800D toolroom lathe. HEY EVERYONE I HAVE CHILDREN NOW. MY POOR LIFE DECISIONS ENDED IN ME HAVING THINGS WHICH NEED CONSTANT UPKEEP AND PURCHASING OF EXPENSIVE ACCESSORIES ON A REGULAR BASIS AND WHICH TETHER ME TO ONE LOCATION FOR YEARS UNLESS I WANT TO SPENT A LOT OF TIME AND MONEY MOVING THEM!

My children weigh 4,600 pounds combined! Don’t you dare call them fat,  you droplet of coolant curdle!

Getting these two machines – the result of an industrial auction – is a worthy post by itself, and we learned a lot about rigging and moving heavy things that week. There’s quite a few resources on the Internet from people who have documented their own DIY machine moves, so I will gladly contribute to it. Let’s just say it involved…. 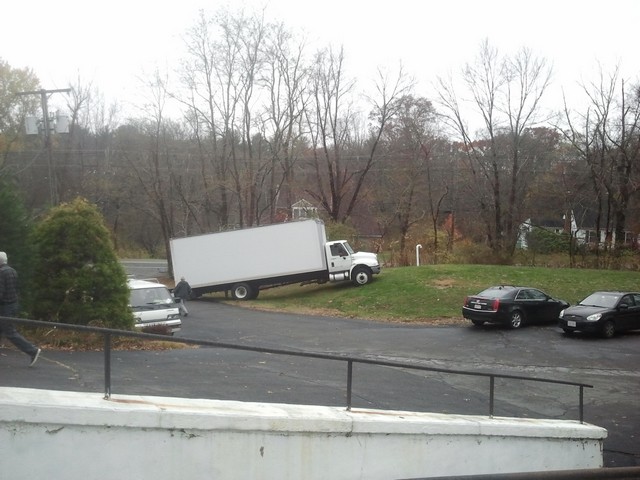 Don’t look at me, I wasn’t driving.

So what’s next? I’m basically moved in and have been hacking at things for a few days now. Ongoing facilities improvements will occur – such as moving the machines to their final spots where power will be run to them. I’ve been kept busy by contract work for most of this fall so far, but #season3 is on the horizon and I have some new and exciting content for the Beyond Unboxing series coming up soon, not to mention Brushless Rage development.

3 thoughts on “A New Beginning, Episode III: Revenge of the Charles”