This is the main drive gearbox for Überclocker’s giant fork, so it needs to be absurdly overbuilt to withstand other robots landing on it. 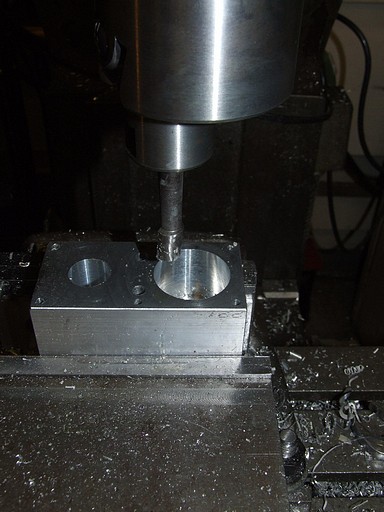 Let’s start with a picture of me being halfway done. This was a process underway during a morning hour early enough such that I was just running the  “machining drone” brainware.

A picture of a brick of aluminum isn’t exciting anyway. 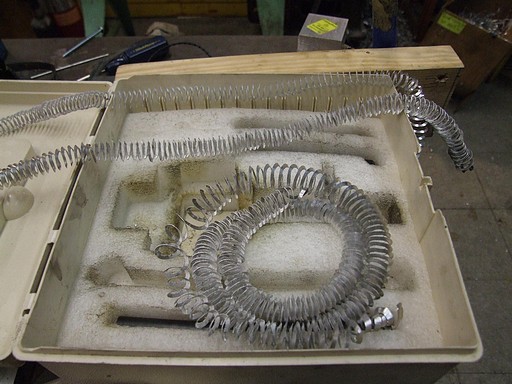 …then hang them all up in the space. The longest on record stretches the whole12 feet from the floor to ceiling.

I’m fairly certain that one came about from a LOLrioKart part. There’s just nothing else I can think of which warranted moving that much \m/etal. 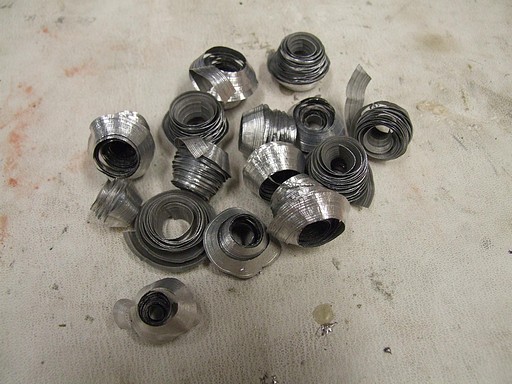 I seem to be more interested in the chips than the part. But I’ve never seen these get ejected before, so they need recording. It’s kind of like discovering a new specie of animal. Would this be some sort of tropical aluminum snail?

These were generated using the “Okay, this hole is at the right dimension, so as long as the boring tool is set correctly, let’s BEAST THE OTHER HOLE IN ONE FUCKING PASS” method, for which I am well-known. 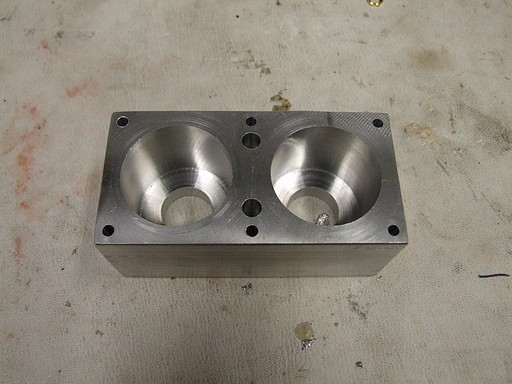 Yeah, about that. Guess which one of the ring gear circles got the one-shot treatment.

The two small holes in the middle are for steel dowel pins that will positively locate the motor mounting plate such that nothing slides around. Even with 6 screw holes, I still wanted some sort of piloting surface that will guarantee the correct motor placement.

(Hint: It’s the one with the really shitty bottom finish.) 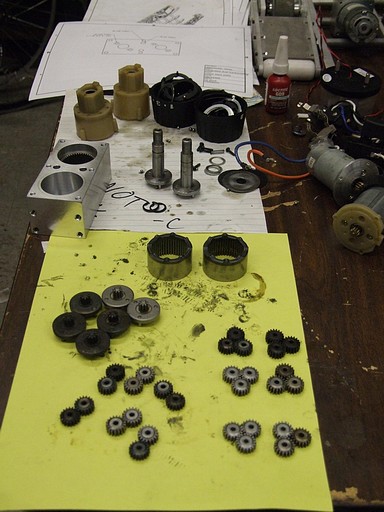 An eclectic pile of drill parts! So there’s (roughly) 3 cordless drills in this picture, except you can’t tell because showing you a picture of a pile of human parts and saying “There are 3 people in this picture” has about the same effect, perhaps with more retching.

So why are some of the gear parts black? Because I figured out the coolest way to degrease them ever. 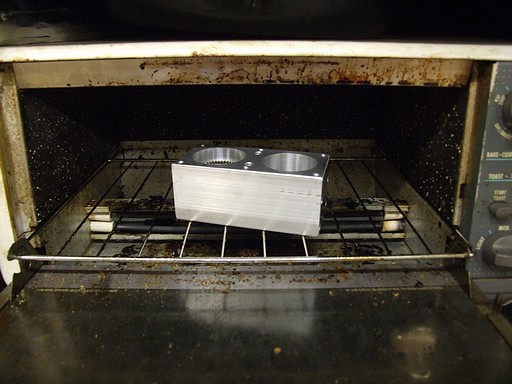 No, just kidding. I finished the Bores of Ball Bearing Holding very slightly undersize, so I figured the best way to install them without brute force was to pull the classic coefficient of thermal expansion trick. When metals are heated, everything expands – outer dimensions get larger, and inner dimensions get… larger. It took me a long time to come to terms with that.

Regardless, freeze your bearings and cook that which your bearings need to be secured in. I chucked the bearings in with the ice cream and turned the toaster oven up to Broil, and waited a few minutes.

The bearings, now slightly smaller, slide right into the bore, now slightly larger. When the temperatures equal out, everything is as secure as can be. 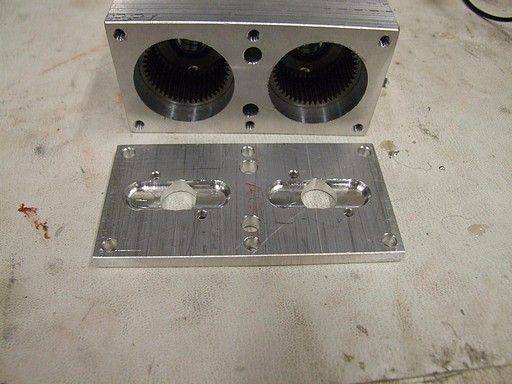 While the gear casing was baking to golden-brown crispiness, I worked on the motor mounting plate. This was the most straightforward thing ever – holes in a flat bar of metal. Stuff that I used to do by hand drill, then drill press, now spend 10 minutes setting up the mill.

The two slots are to clear the front vent holes in the motors, so they can get some air. See, that was something the hand drill COULDN’T do! 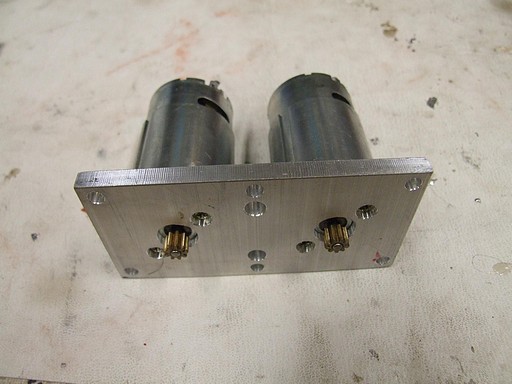 Other side, with motors mounted. I designed for Speed 700 size motors on the lifter too, but ended up using these 550-size drill motors. The reason was that I couldn’t locate more 15 tooth pinions and 24:1 gearboxes.

Überclocker did just fine with 2 550 motors at D*C ’08, so this shouldn’t be too different. In fact, the reduction is even higher this time, so current draw should be less. 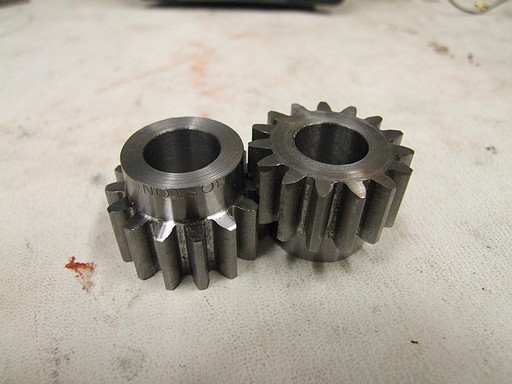 Here are the beastnormous gears that the motors will eventually be driving. 12 pitch, 15 tooth, and (originally) 1 inch wide face. Quite substantial. I didn’t need all that bulk, so I cut ’em down to 5/8″ face. 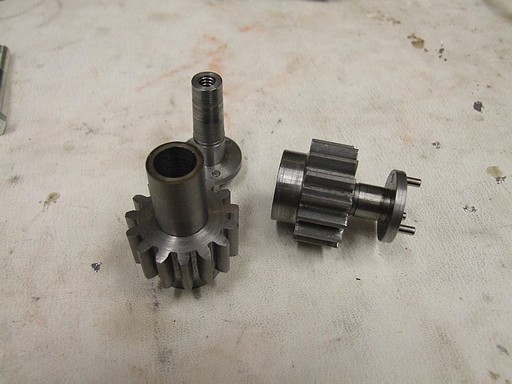 So this is how shit goes down.

Originally, the gearbox design called for a simple crosspin to secure each gear to its respective motor shaft. I decided in about 5 minutes after looking at the model again that the idea was completely not legit. First, the space constraints were such that I could only fit a 1/8″ wide pin. Second, and worse, the pin location was limited to the distal end of the drill shaft, which was hollow. Long story short, I started investigating options that didn’t involve “concentrated point stress riser under shear”.

I excavated an idea which machine tools have used for centuries and I last used on Trial Bot 1.0 in 2005 – a tapered shaft with matching tapered bore in the gear. Good god, what? Machine tapers are really cool in that they transfer tremendous torque in a small space using the full contact area of the metal in the taper. Gee, that sounds like exactly what I need.

I settled for a Morse #7 taper with the gauge width of a Morse #1. In actuality, it was just whatever I set the taper-cutting attachment on the lathe to. 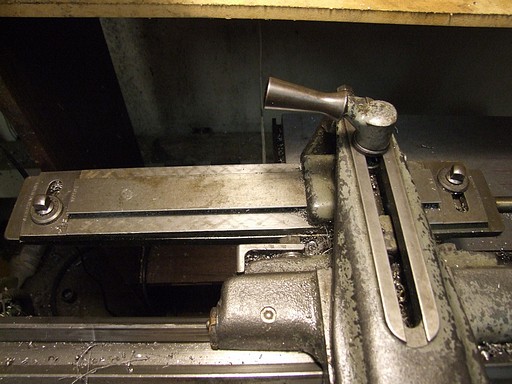 Taper what? The folks over at South Bend Lathe Works, some time 50 years ago, included a taper-cutting attachment on the machine that eventually through some circuitous history of ownership made its way into our club space. This is a really nifty device that I would have trouble explaining the exact functionality, since smarter people designed it. It adjusts to let you cut a taper from 0-5 included degrees over the length of the bed.

So I set it to “3 DEGREES”, locked everything down, and hoped for the best.

It worked. In fact, so well that now I’m trying to think of ways to get the gears back off in the event of an emergency. 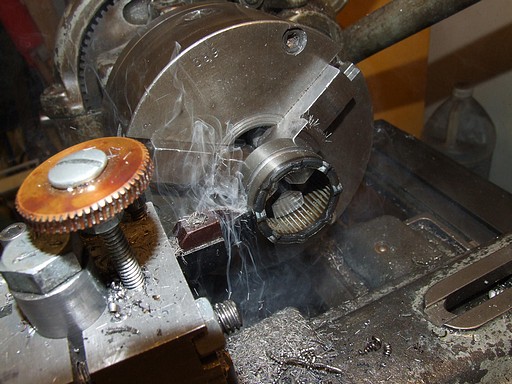 To make the IDFBs work, I needed 3/2 of a drill ring gear to support 3 stages. The solution was simple enough – take a spare ring gear and cut it the hell down. Sintered steel machines very strangely because of its porousity. It soaks all the oil from the gear grease, and kind of self-lubricates, but having no real grain structure, it finishes like total ass. 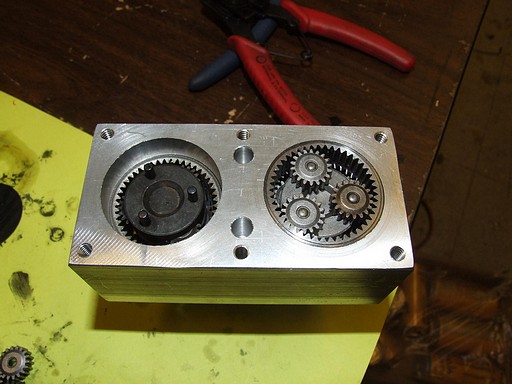 I pulled the freez-and-burn installation technique to great success a second time. Here’s a pic of the gearbox being filled with… you know, gears. 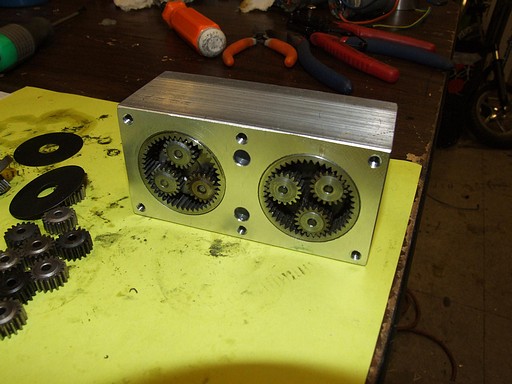 Both ring gears installed now. Even at 216:1, the whole thing is extremely smooth when dry. Adding grease would increase the drag a billionfold I’m tempted to just use gear oil, except the other side vents to open air and it would all just flow out and make a mess. 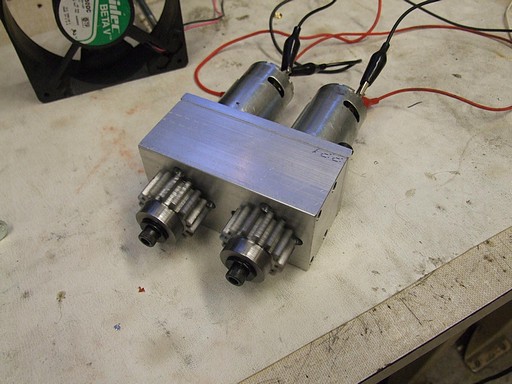 SPIN TEST! This thing is so incredibly ridiculous. Very smooth and quiet, even at 24 volts (the motors are 18 volt units). And pretty much unstoppable. 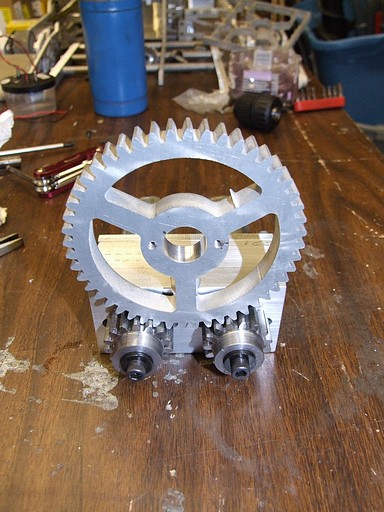 I tested the gearbox with both pinions mated to the fr0k gear. While the mesh isn’t a problem, the differences in motor speed are enough such at over the course of 20 or 30 revolutions, the gear skips a tooth. This will be no problem once the gear is actually mounted. The current draw resulting from mechanically equalizing the two motors will be slightly higher, but it won’t cause problems.