Questions for which I wish I knew the answers. One full week left of Überclocker work, half of which is Orientation for the Class of 2013, which means I sort of have half a week left.

The past while has been filled with high-intensity gearbox manufacturing. I am now relieved of work obligations, so that means I can plug on the build day and night. The drive motors are done, and with another run on a waterjet, I can have the drive base structurally complete. Hopefully that will occur by the end of the weekend.

Oh, yeah, pics. Usually by the end of a build, I’ve somehow wrecked yet another camera, but fortunately my surrogate machine is too big and chunky to forget about, then drop something on. The past few posts on this site have been garnished with pictures courtesy of my Fuji S9100, which I got for the excellent price of Free a while back.

It has too many buttons for me to operate properly. 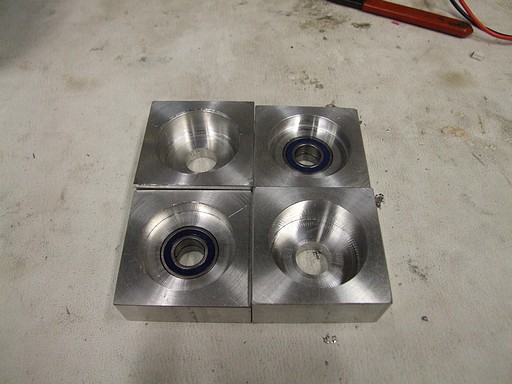 I made two more embryonic drive gearbox halves while the Bitch Chuck was still dialed in. The bearings were put in as a test fit, but then I figured that they were sealed and it was okay to proceed without removing them.  They are 6901 type 12mm bore bearings. Each pair of two will carry a modified drill gearbox shaft in the gearboxes. 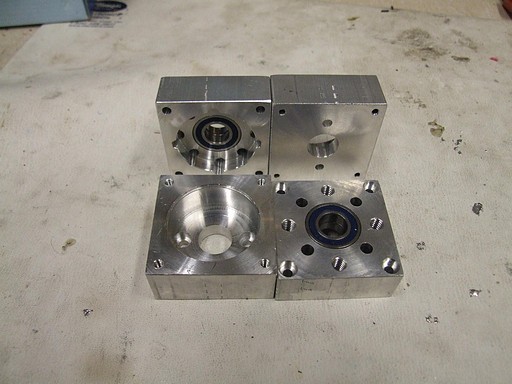 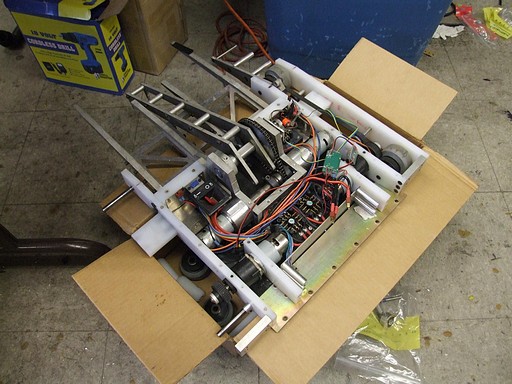 Okay, it was time to start parting out the old bot. I needed the all the juicy parts out f Uberclocker 1 – motors, gearboxen, and the Victor controllers.

Oh, and the drive wheels. I had neglected to order more 2.5″ Colson wheels. The ones on the bot were in pretty good condition, so I just transferred hubs. 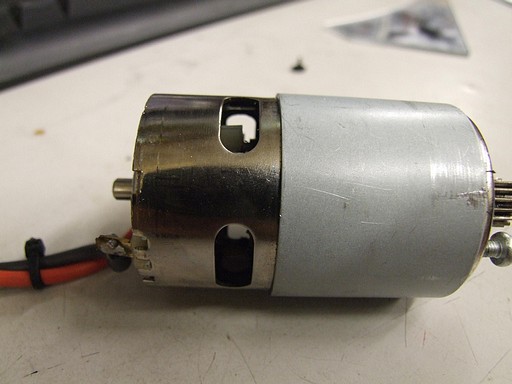 Überclocker got more banged up than I remembered. When I pulled the left drive motor out, a few chunks of plastic fan fell out the vent holes. Closer inspection revealed that the motor had actually thrown a rotor winding. I wonder how long the bot was running like that, or why the motor even ran at all?

The other motor also lost its internal fan, but was otherwise functional.

I elected to not reuse these. Wheels can generally be missing chunks and still work fine. Motors gnerally do not.

Okay, so what to do now? Speed 700-size motors are more difficult to come by. I started scanning the surplus channels for possible candidates. 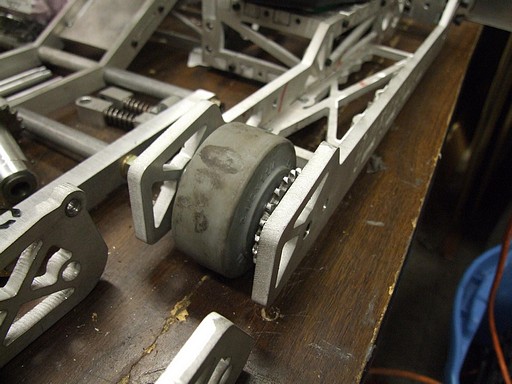 I installed one of the drive wheels for kicks. The mount holes still need to be countersunk, so ultimately I’d have to remove it again, but hey.

The robot will have about 0.5″ ground clearance when all is said and done. 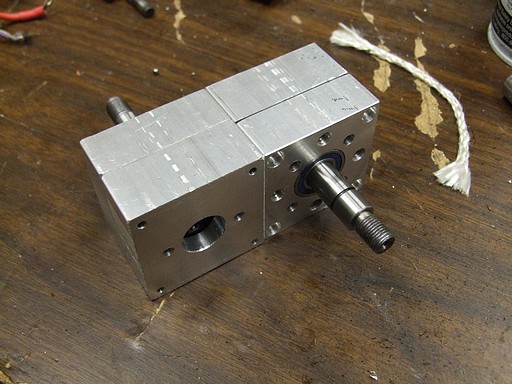 I continued down on the drive gearboxes even without a motor to attach to them, running on the confidence that mass production has made virtually all Mabuchi 775 size (Speed 700) motors share a common bolt pattern. 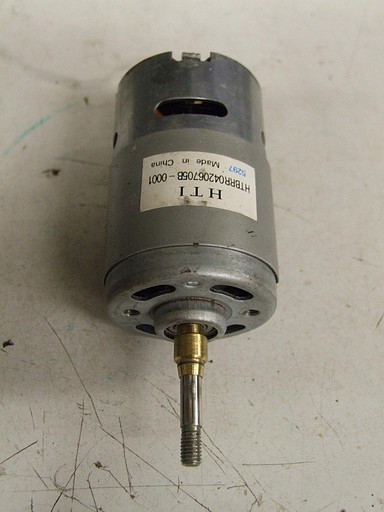 These HTI units are commonly found in the surplus channel. They appear to have been manufactured en-nutty-masse for some kind of small vacuum cleaner. Regardless, AllElectronics has them for $3.75, MECI for $3, and the Robot Marketplace for $Jim, are you fucking serious?

Downside: They’re not neutrally timed. The timing appears to be 5 to 7 degrees in the CCW direction. This means Überclocker will be tracing a hell of a big circle all the time, but, as the laws of mathematics dictates, under small arena-sized deviations, a curve can be considered straight. 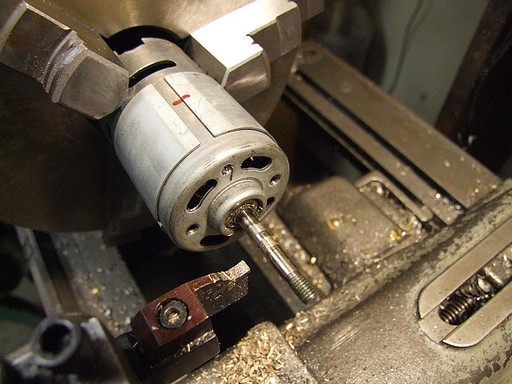 To actually be useful, the weird brass ring had to be removed from the motor shaft, and the whole thing needed to be shortened.

No problem, let’s just chuck the whole motor in the lathe and carve it all off in one setup. Again, this is one of those things that I put up just to make shop instructors cringe. Do not actually do this. 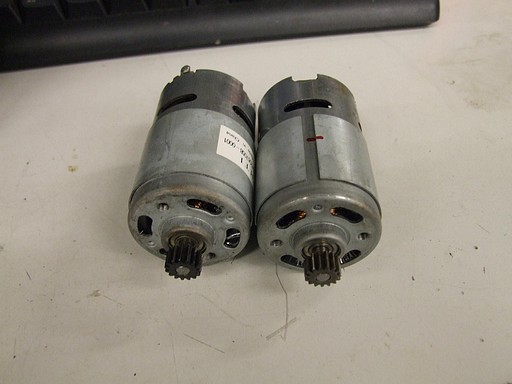 All done. The 15 tooth (rare!) pinions from the toasted motors were pulled off and reinstalled on these, with a dot of Loctite for trimmings. I say rare because only the 24:1 drill gearbox has a 15 tooth pinion, a gear large enough to actually bore out for the 5mm shaft of the Speed 700 motors.

The 24:1 drill gearbox is extremely uncommon in cheap drills. So uncommon that I have had trouble locating more for spare parts. 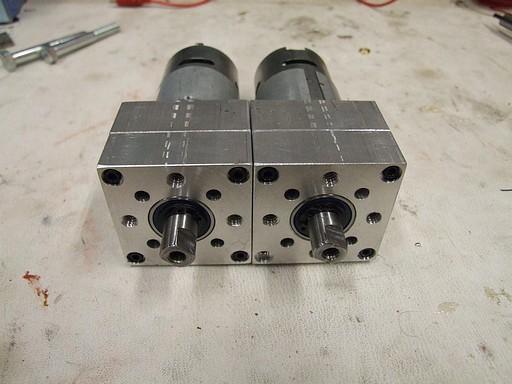 All mounted and ready. I’ve already cut the D-flats into the output shafts. These will engage D-flatted bores in the (still to come) final drive gears, and be retained by a single end screw.

Once I get said gears cut, the drive base can be assembled and theoretically tested. Next, to make a Siamese twin version of this gearbox – the Integrated Dual Frakenb0xen.