In the previous post, I presented a summary of the various shortcomings of the Overhaul 1 design. This will be the first of two (or more…) posts which heavily dive into the details of CAD modeling, and SOON! you’ll get to see the Overhaul 2 design in its entirety. The idea of these posts is to show how the design evolves incrementally from the crude sketch to complete model…. and also the little changes made to it even after it’s “complete”, because that happens every time. Always.

My software of choice is Autodesk Inventor. Yup, I’m a child of the Autodex. They got to me first in 2005 when I was a high school sophomore, with handing out Inventor Professional to FIRST Robotics teams. MIT largely ran off Solidworks, and during my time as an instructor I also taught intermediate to advanced Solidwanking (that’s a technical term) for the design classes, but whenever I do something for my own projects, Inventor is still my go-to.  These days, Autodesk tends to push Fusion 360 to the maker crowd and it’s generally free with limitations. Even just a few years ago, if someone asked me how to start using CAD programs, it was hard to give an answer that was accessible. That’s changed now with Fusion, 123D, Onshape, and other platforms, which is great. If you’re a student or have .edu affiliations, you can get students’ and instructors’ licenses for Free (as in Beer) from Autodesk Educational Community for a few years at a time.

So anyways, all the screenshots you’ll see will be out of Inventor Professional 2016. My opinion is that on the average non-commercial (or even light commercial) usage level, the difference between Inventor and Solidworks is largely like Ford and Chevy – largely the same features, same commands, and same structure are seen in both, with some nitpicky differences such as I’ve never successfully turned on a headlight in a Ford car, I’m pretty sure. “Solidworks vs. Inventor” is like the vim & emacs debate of CAD students, so I’ll just say that I’ll have none of it here.

This sketch was actually the last in line of several I was playing with, which sadly were not saved. It originated from the desire to push the “dustpan” front end of the robot into the drivetrain a little, such that I could have front wheels almost directly under the center of lift. This was something that we played with for Overhaul 1, as shown in this CAD party photo from last year. 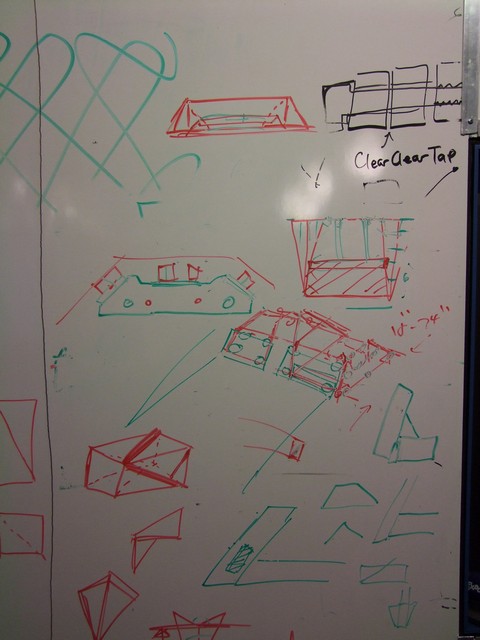 As can be seen, the bot was a lot more sloped, and the earliest designs of the shuffler modules reflected that. We were going to make the front armor heavily sloped and stuff the front of the drivetrain under it. But that evolved away for reasons which I do not remember well – possibly ease of fabrication focused.

The rest of the shape of the sketch followed the thread of putting wheels under the new dustpan region. Those wheels had to be smaller than the others, which was fine. I originally had the design as 4 wheels instead of the 6 shown (3 per side), and I think that would have been passable. However, I decided to explore 6 wheels to give me more options for wheel placement – basically, tuning the “front” and “rear” wheelbases independently as needed. 6 wheel drivetrains also have the benefit of being able to place the center wheel very slightly lower (“drop center”, for you FIRST kiddos) such that the bot is basically 4wd at any point in time on a shorter wheelbase, preserving turning speed while affording a large stable base.

Beyond that, the sketch was simply “what looks kind of okay” on the dustpan profile and body length I drew. There was no science behind the other dimensions – I just wanted something on screen to stare at. I liked the idea of a multi-faceted dustpan for cool looks, but wasn’t entirely set on it.

Fast forward to October. Season 2 was supposed to have been announced 3 months ago and I was in the middle of RageBridge 2 development, when suddenly, applications for #season2 opened up! Uh oh, now I actually have to put things in the frame sketch. It became obvious very fast that this bot was too small – nothing useful could fit inside the space as-drawn, even though it looked nice and compact!

So I made it longer.

As you can see, I literally made every dimension a bit longer, and put some sketch boxes in to represent motors and stuff. Also shown in this sketch is an imported side profile of Overhaul 1. Yes, even after stretching the new design (“Holy crap, 3 feet?!”) it was still shorter than Overhaul 1.

This sketch was reasonable to start making “3D” so I could start playing with placing part models.

So I did just that! I took this sketch, stuffed it in an Assembly file, made it a reference drawing, and started extruding parts off it. Just solid blocks. 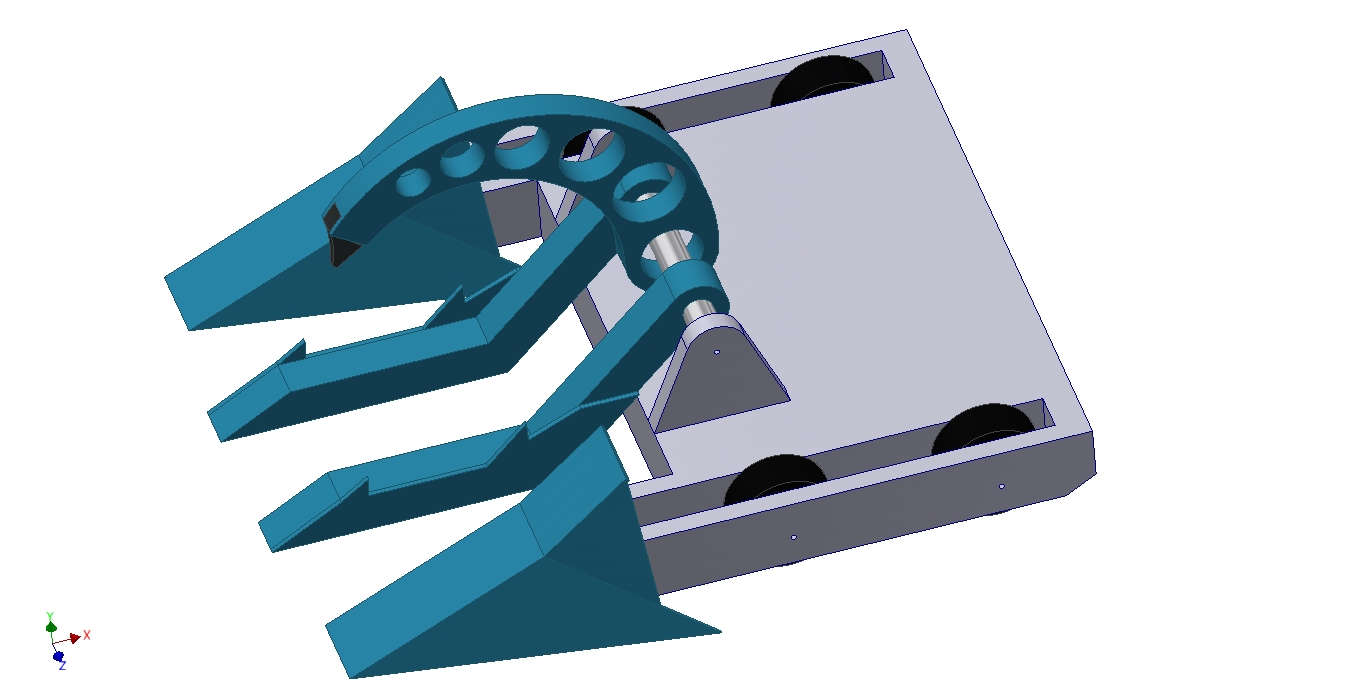 Everyone who saw this sketch model said it looked like Bite Force. Well gee, I’m sorry not sorry if some times in engineering there is an optimal geometry to get something done. That’s going to start biting BattleBots in future seasons, I think, when more of the design space is “claimed” by certain successful designs. But we’ll burn that bridge when we come to it, as I always say.

Noticeable additions to the sketch include little side strakes on the lifting arms. I put these there for looks largely, but Überclocker’s “fish hooks” have been wildly successful in snaring bots that the fork gets under, so I was planning on including similar entrapment devices. Did I mention pointy bots look cool? They do, right!? 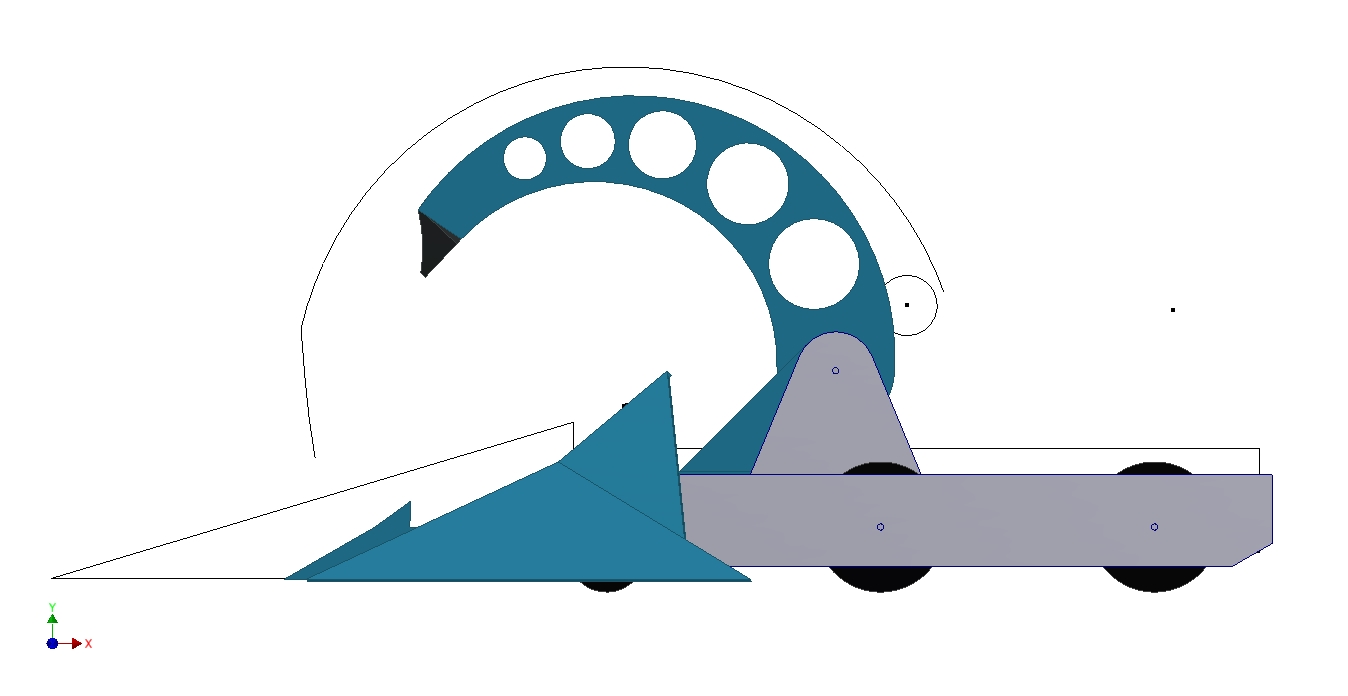 Another side profile shot with OH1 in the background as a halo. 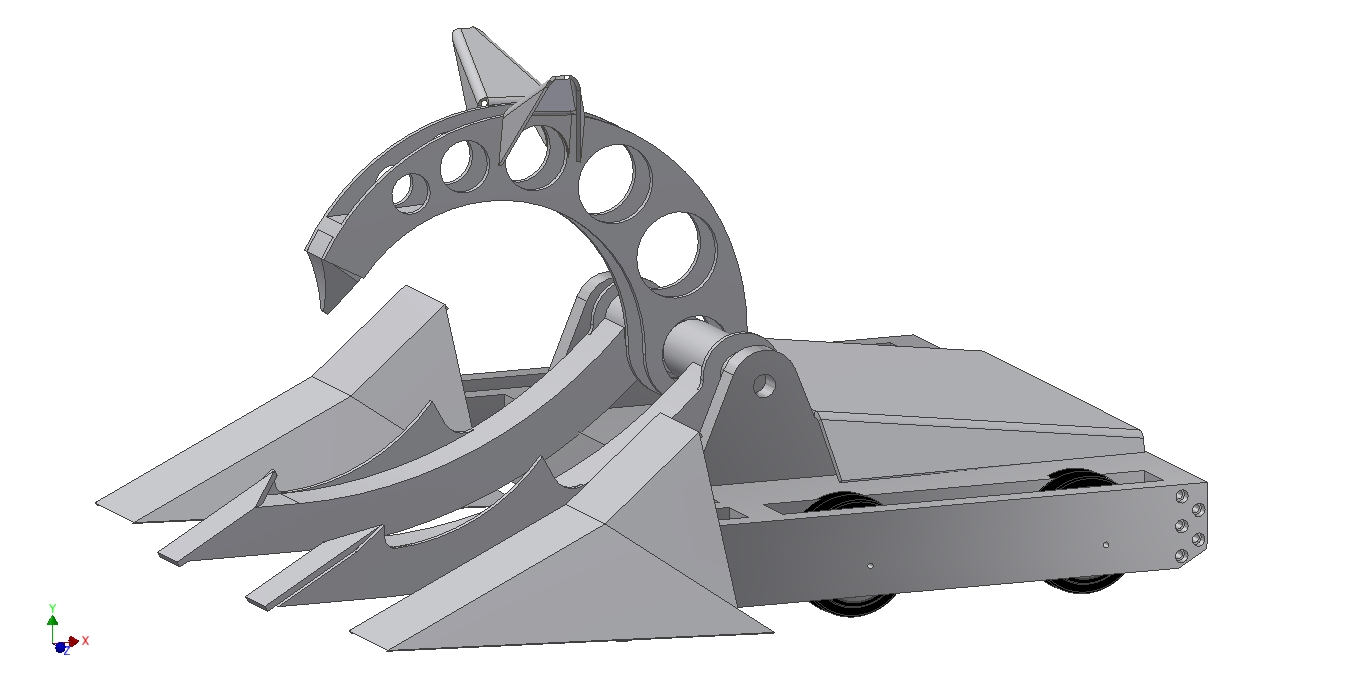 Whoa… quite a jump from the last picture here. Actually not so much. I just hid the square arm and replaced with with 1/8th of a circle that intersected the lift axis and was tangent to the ground, and then extruded a bunch of shapes off it. I think this looks cooler – the curved arm works well with the upper arm (which has been separated into individual pieces, but still all driven off the big assembly master sketch). Not only that, but the constant curvature is stronger than a sharp angle joint with faced with the bending forces imparted into it by the top arm.

I was playing more with the top and back sides of the bot at this point, trying to emulate the sloped-back look of OH1. I made a simple Sheet Metal part with 2 bends in it to give some more non-square shape to the sides. And the cherry on top was of course the now-classic Overhaul Ears, also a Sheet Metal part that was referenced from the top center hole in the arm.

Nothing in this assembly can move – it’s all just sketches and extrudes. It’s a visual clay-model for me to think about the shape and size of the bot. 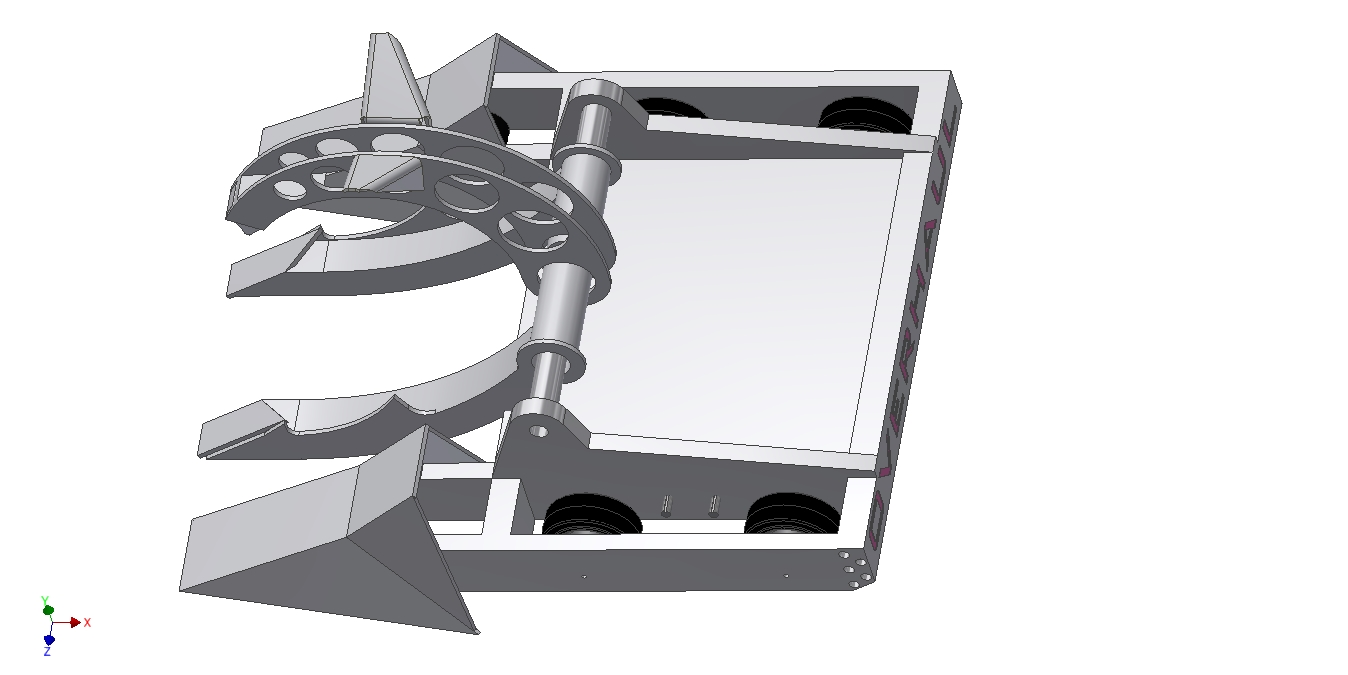 This is the previous sketch model with the top plate removed. The arm towers just grow out of the big solid rectangular extrude feature that is the body, so my next step was to hollow it out a little bit to add part models inside. 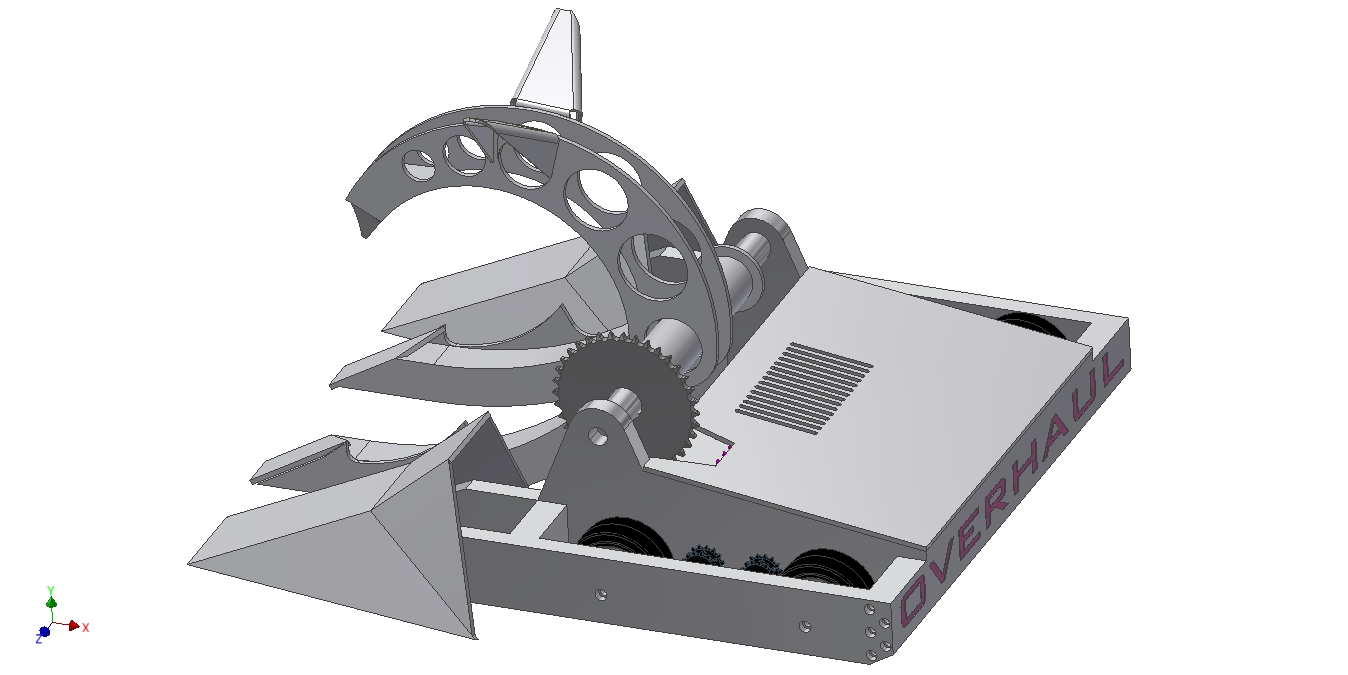 Now it’s starting to look a bit like a robot. I stuffed some sprockets in to get an idea of plausible drivetrain scenarios. How much chain/gear/belt ratio you can use is largely dictated by things like wheel size, and that’s influence by robot shape. I grew this design from “robot shape” downwards – many people grow designs from “I have this motor” upwards. In this case, since it’s a bot which is trying to take after a previous design, I wanted to establish the form first.

Notice also that the bent-style top plate is gone, in favor of a single flat plate that forms the sloped back of the bot. Again, just playing with shapes – I decided to let component placement dictate where I put top armor and back armor. So long as things fit inside, we’re chill. 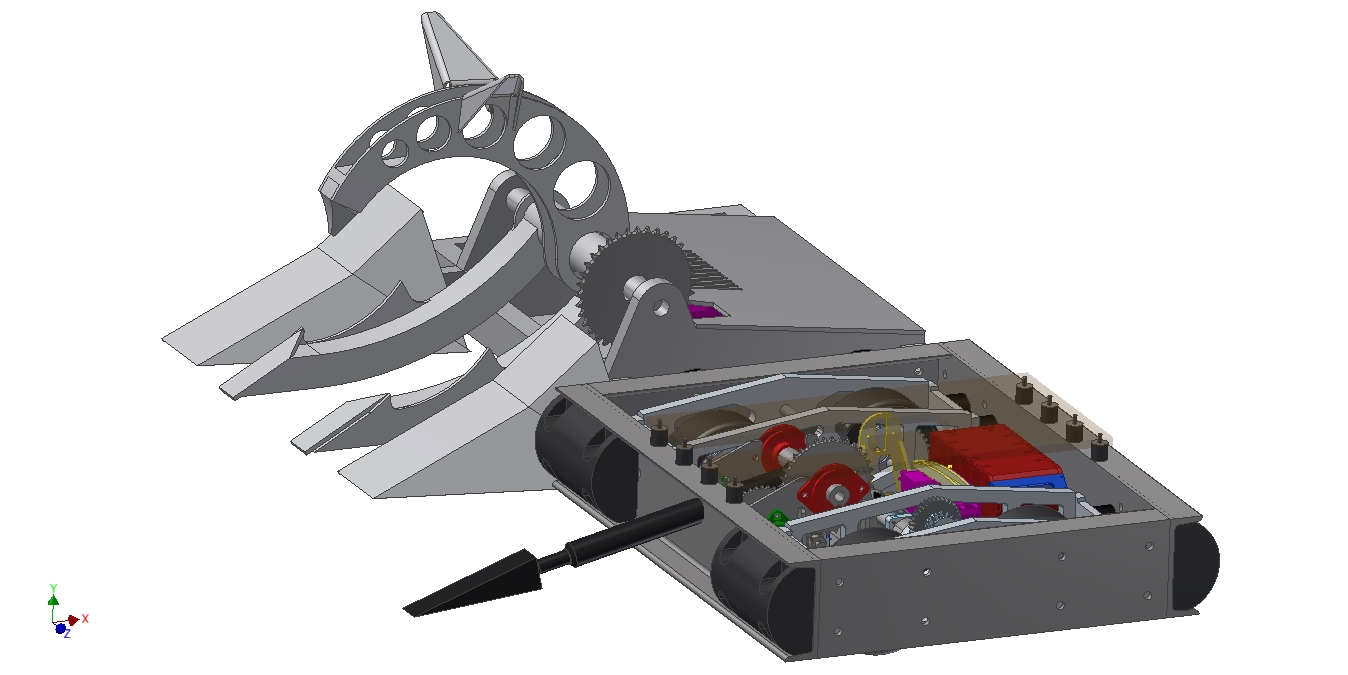 Look! It’s Sadbot! I have a whole build report on this thing that some builders in the community will find very interesting.

Especially after this next image. 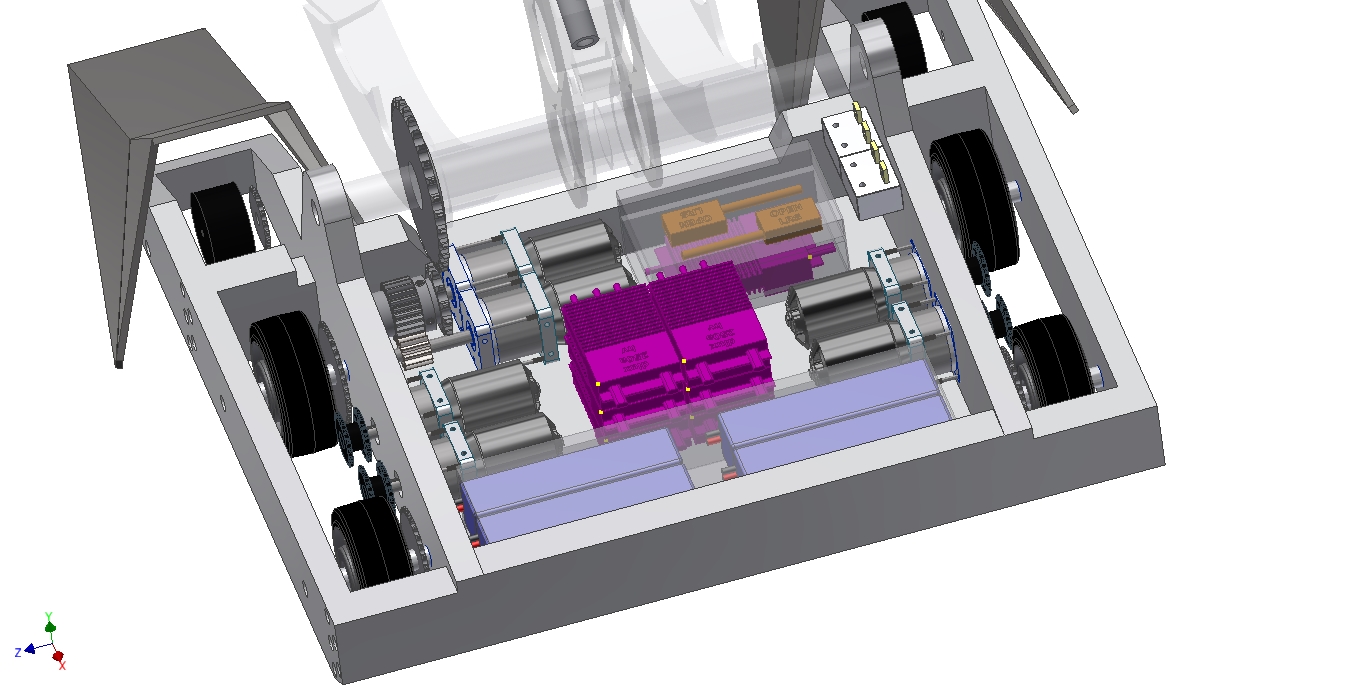 Here I am trying out a few test components. Keep in mind that these were all part models I had on hand, or extracted from manufacturer websites. The blue bricks are batteries – the same 8.0Ah, 18.5V lithium packs we used in OH1, just a flatter configuration. The purple things are motor controllers, and the gray cylinders are motors themselves. These are quite different from what I’m used using in bots, especially big ones.

I can hear jaws dropping, the “I KNEW IT”s, and the finger snapping from some of you already. Again, explanations in due time, I promise.

Also shown in the photo – on the right upper corner, two Whyachi MS2 switches, since the new rules required separating drivetrain and weapon power, and some more big sprockets and gear models downloaded from McMaster-Carr to, once again, get a rough idea of how much gearing I can put into this frame. Less than 2 hours of clicking around separate the last two images, so no magic is being exercised here. 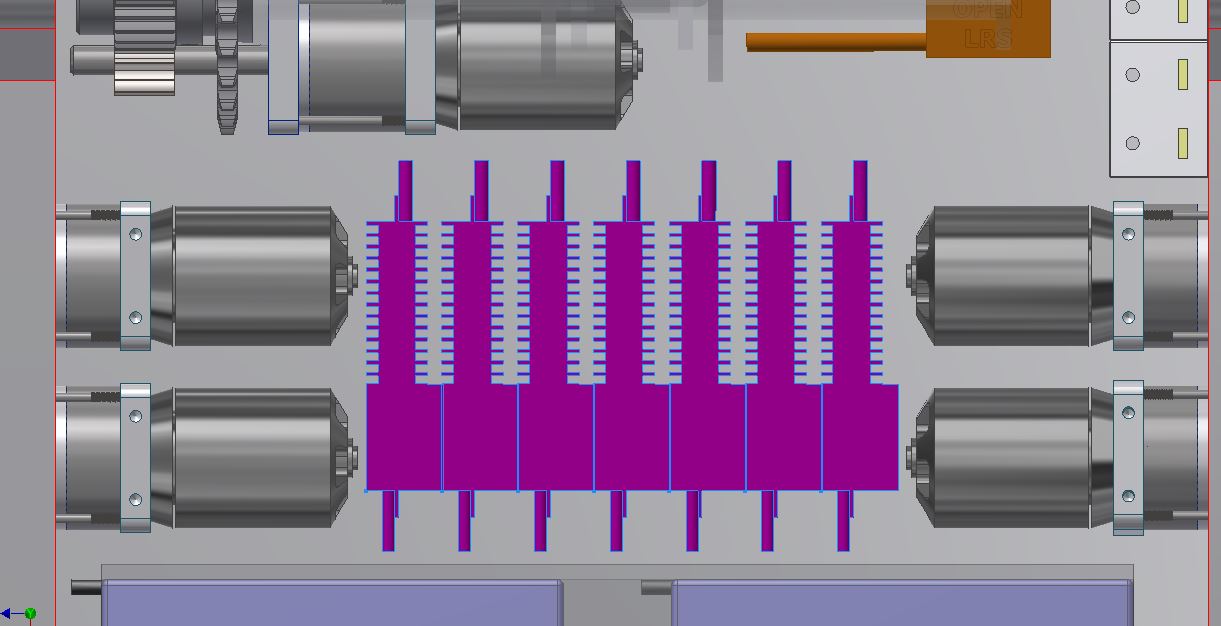 Here is a different configuration of the interior. Motors and controllers are often the biggest-ticket items in a bot design, so you kind of wrap the thing around them because they ultimately dictate how your robot drives and behaves. They’re also the juiciest and most prone to damage from abuse, so it’s good that everything is kept in the center.

Instead of a “2 x 3 stack” like previously, this arrangement is just all the motor controllers in a row, laid out flat. I liked this arrangement more, because it lets all controllers be accessed equally for replacement or service if needed. I imagined just having a huge bus rail attached to the battery pack that the controllers plug into, so I can rip one out easily if need be. Their heat sink fins being vertical also helps for heat dissipation, which if you’ve read enough RageBridge development posts, is the number 1 enemy of motor controllers.

The 7-in-a-line arrangement was very tight on space though. I could have made the bot wider – and did, briefly. But on one side of the bot, I played around with pushing the drive motors further out. The gearboxes shown in the design are Banebots P80 gearboxes, which proved themselves well on OH1’s lifter and clamper/crusher gearboxes, so I contemplated using them for drive. Part of Sadbot’s mission was to see if a few of them could handle a 250lb-class drivetrain. In this sketch model, I had the bright idea that I’d basically use the P80’s longitudinal structural bolts to mount them to the frame – just use longer ones, so they poke out the back of the gearbox.

Pushing the drive motors further out enabled me to free up almost 5″ of interior space across the width. That was plenty to put the controllers in, separated comfortably, with room for future mounting hardware, since you don’t just throw things inside a bot frame and hot glue them in…. Okay, fine, some of you do.

It was in this state that I submitted the application to BattleBots for Season 2 in late November. Everything KIND OF makes sense, everything OUGHT TO fit, and SHOULD work on a good day. Seemed legit to them!

As for how this region ended up – here’s how it looks in the finished design. 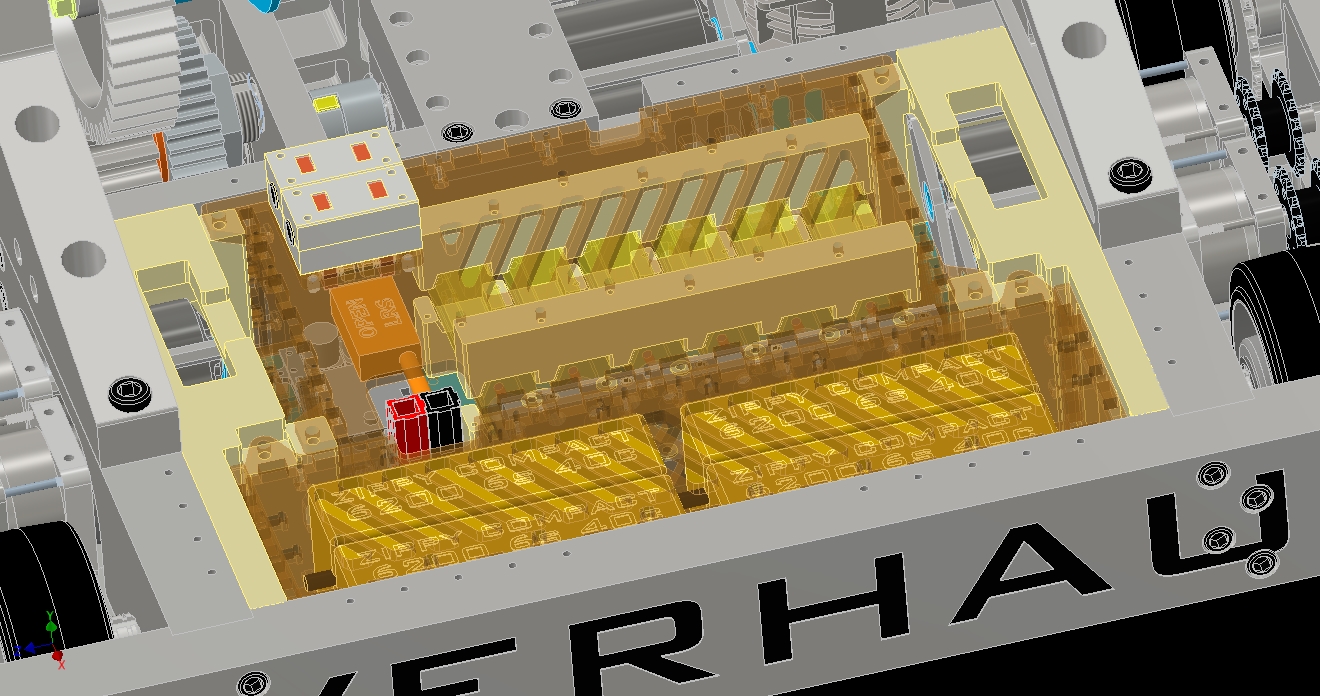 It was now late November. Time to stop CADing for giggles, and start CADing for real. This is where it begins….

One thought on “The Overhaul 2 Design & Build Series, Part 2: How to Design an Overhaul!”