Here we go! The very first (real) post in the Overhaul 2 Design & Build saga, which will set the stage for the future posts. What I’d like to do with this post is give a little more story on how Overhaul 1 was designed and built, its shortcomings in the competition, and then move onto how I think the new build should address those issues. Then, from here on, the posts will be exclusively design and build oriented. My anticipation is that Parts 2 and 3 will be very long, showing the evolution of the CAD model, and from there, the posts will be more scattered with build updates and interspersed with CAD updates.

The first step in evolving a new design is always to appraise the functionality of the old, and to do that, it’s time to review what made Overhaul 1 into what it was for Season 1. In the first portion of this post, I basically summarize the build process for Overhaul 1, so that’s worth a read. What you never got to see in that post, since it was made prior to the airing of Season 2 episodes, was the competed design and the near-completion bot. We weren’t supposed to reveal anything yet, much like how you’re not “supposed to” be doing now.

So here’s some never-before-seen pictures of the build of Overhaul 1. First, the finished CAD model: 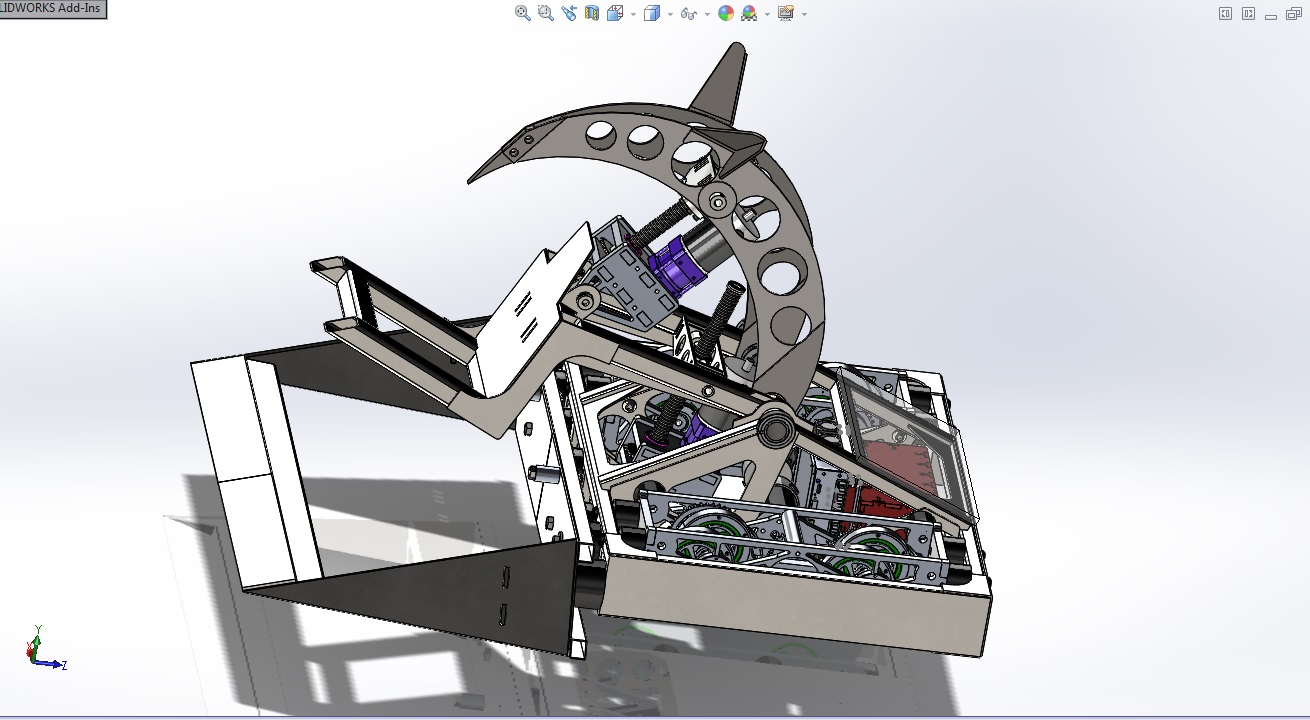 There’s the beast in its entirety, designed using Solidworks 2014. Trying to twiddle this model a year after the fact has caused me to forget much of its hacked-together behavior, and additionally made me wonder what the hell “midline axis of fancy thing” was (it was the central axis of the leadscrew nut on the top clamp arm…)

Documentation. We has one.

Recall the photograph in the “Life of Charles” post which shows megatRON mated to Uberclocker. 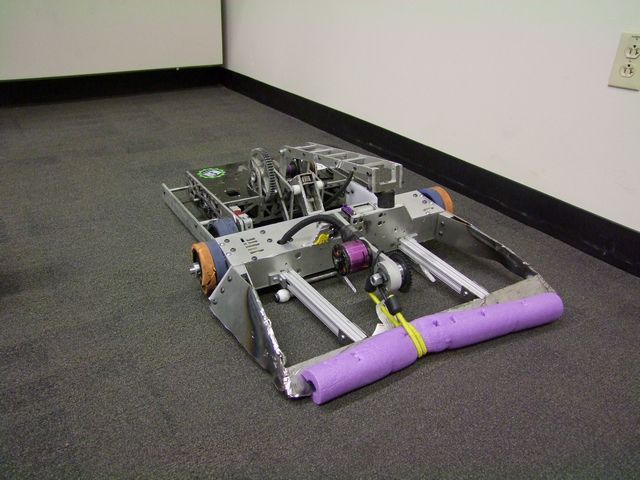 You can basically break down OH1 into three components. The front (leftmost part of the CAD model), which is the dustpan/corral of Ron, the upper arm and clamp which is heavily Überclocker, and the shuffler modules inspired from Fission Product. It was largely designed in this manner, with the four of the principals (J, A, me, and D) moving from ‘station to station’ with the design.

We basically knew from the start that nothing about this design would be ‘optimal’ due to the genetic confluence and conflicting design requirements. So the design was kept very modular on purpose. The drivetrain was one box, the dustpan was another, and the arm stuck on top. The positioning of everything ended up being dependent largely on where internal components had to go, which is a theme which will return for version 2. This ended up giving Overhaul 1 it’s very characteristic “hunchback” look in the arena. 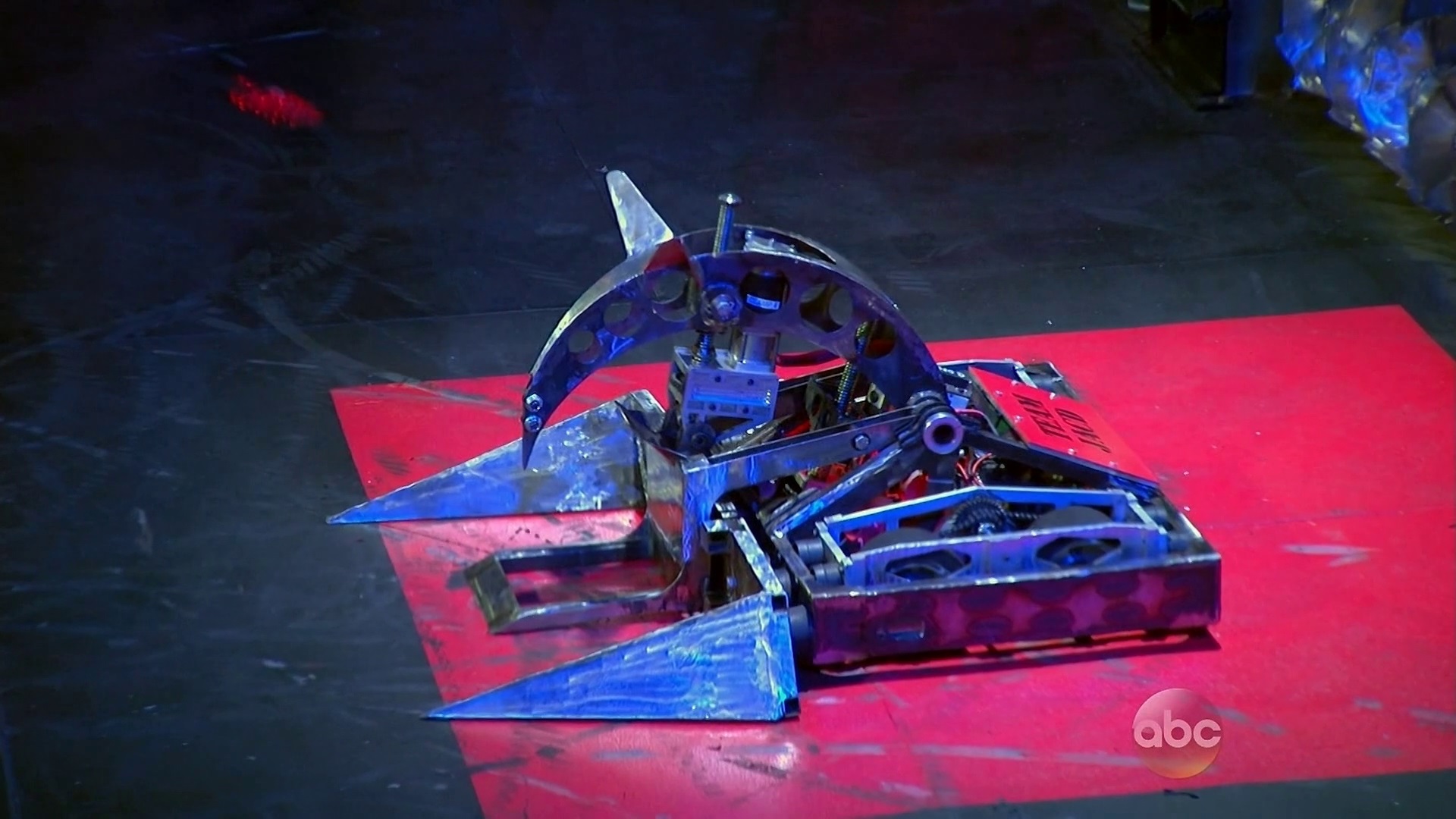 Not only that, but the wheeled drivetrain seen in the tournament matches in Season 1 had to be made to fit entirely in the space previously occupied by the shuffle modules, resulting in the wheelbase being very short – only 10″ on a bot which was 41″ from end to end. It might as well have been 2WD! 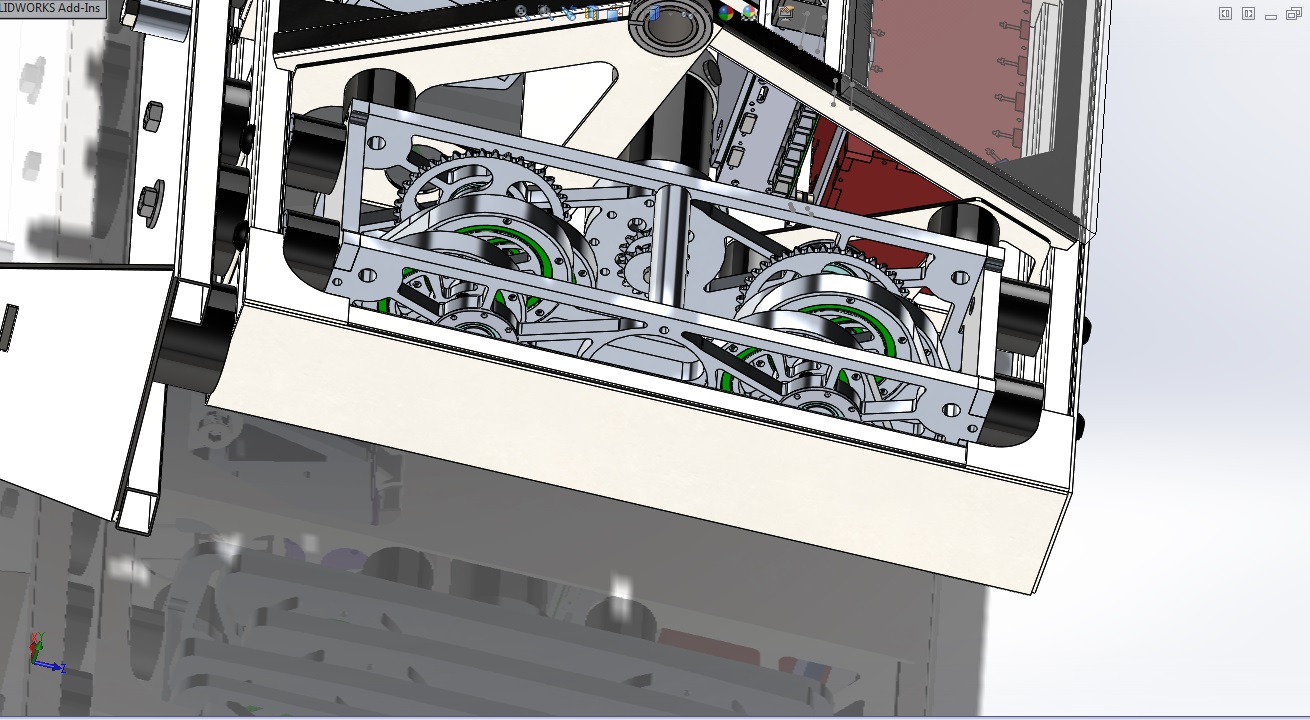 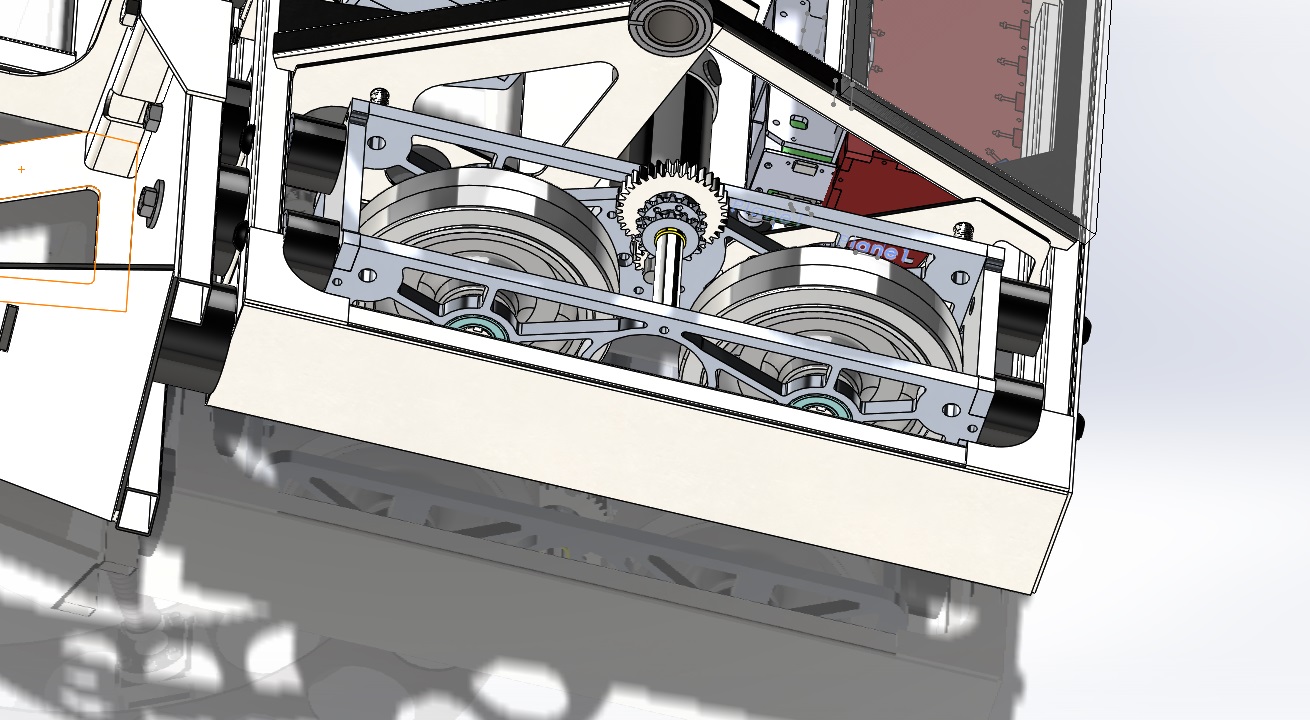 While this made for quick turns, it meant the bot had no front traction centered under the massive front dustpan, and furthermore, was already very front heavy with the lifting arm and its 2 actuators (plus the top clamp arm) hanging off it. The little black and white ball below shows the center of gravity – as you can see, it started past the front wheels. 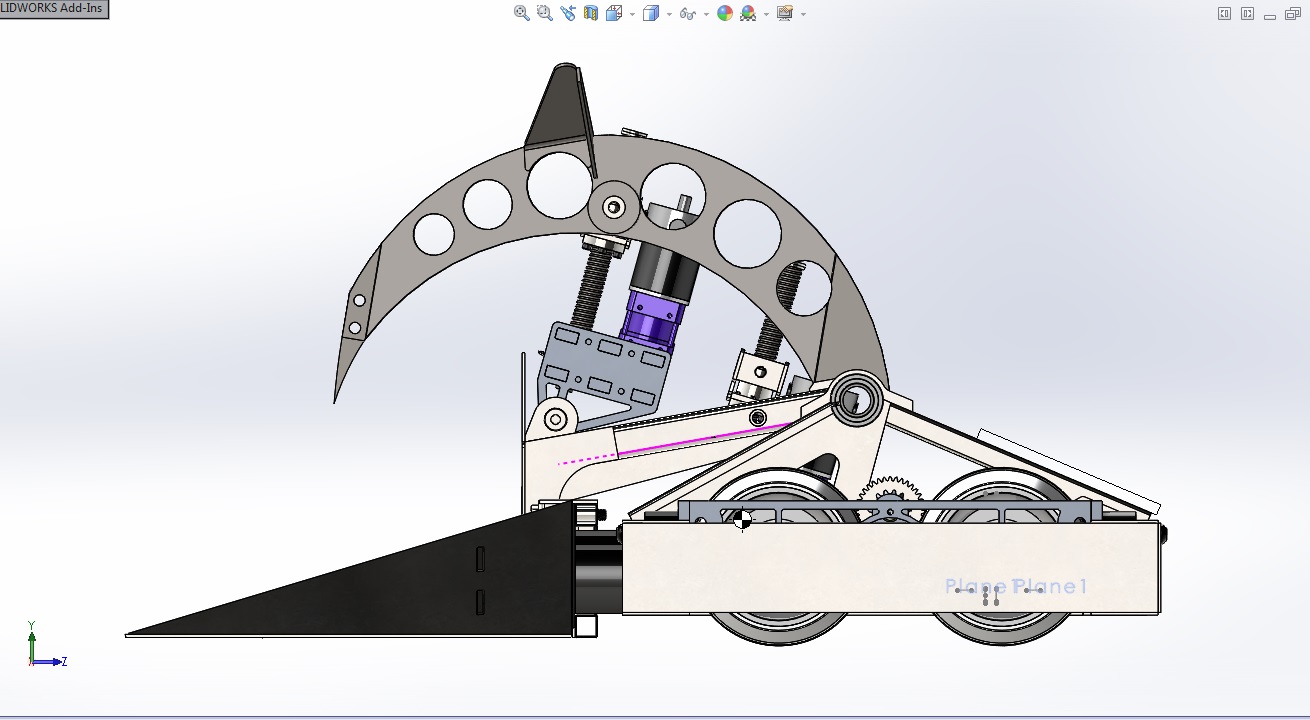 When we got anyone on the forks, it was often at the expense of being able to, you know move. And then there’s this embarrassing shot: 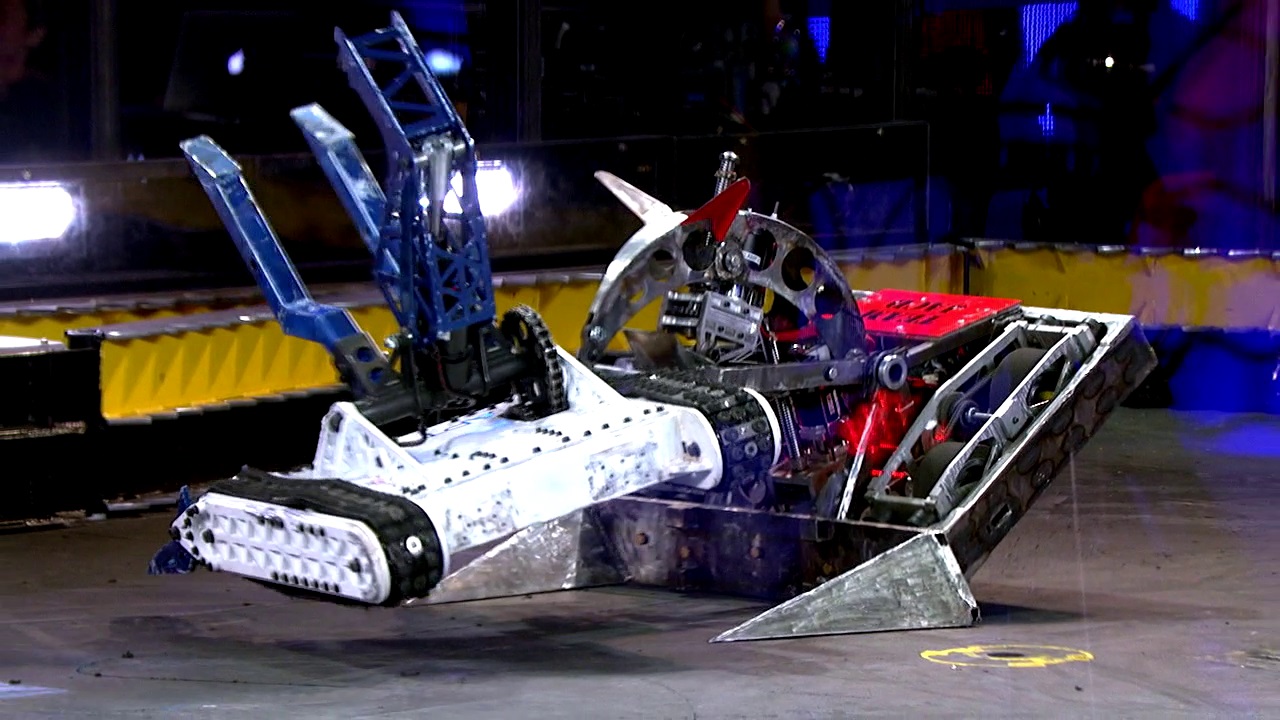 This, coming from someone whose bot was known to do the “robocopter” was borderline shameful. This goof was a result of putting the large rubber shock isolators (“wubbies”) in a straight line at the dustpan’s interface. We just kept it to the height of the bot frame for convenience.

Contributing additionally to traction issues was the large overhangs of the drivetrain caused by the switch to wheels. The shuffle legs could reach well past the “wheelbase”, but wheels, obviously, were limited to the contact directly under them. This meant that there were plenty of moments where OH1 was lifted up backwards – either by opponent attack or counter-torquing the lifting arm, such as the first Lockjaw match below, where I couldn’t get out of it without lowering (or being lowered) back down. 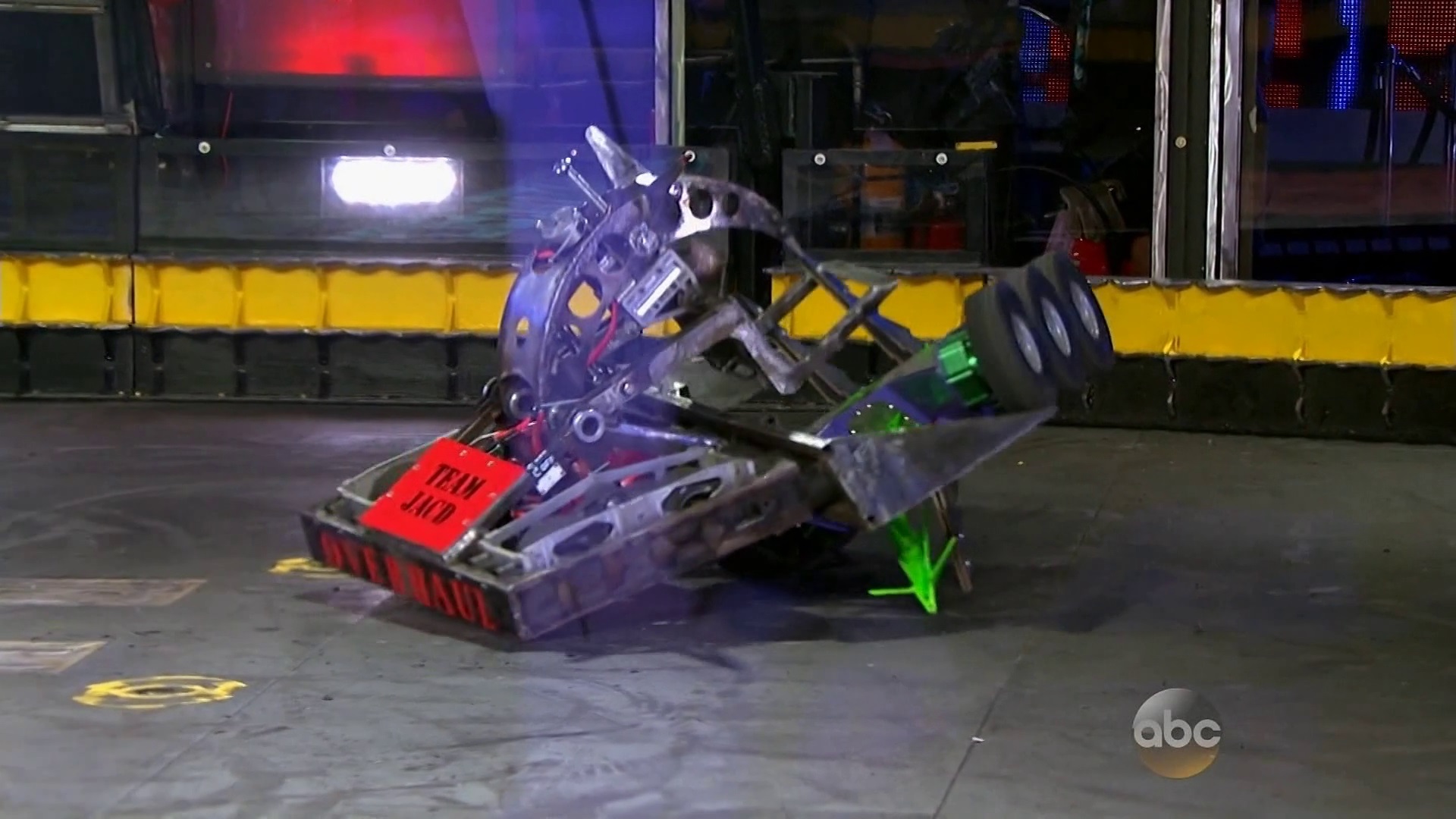 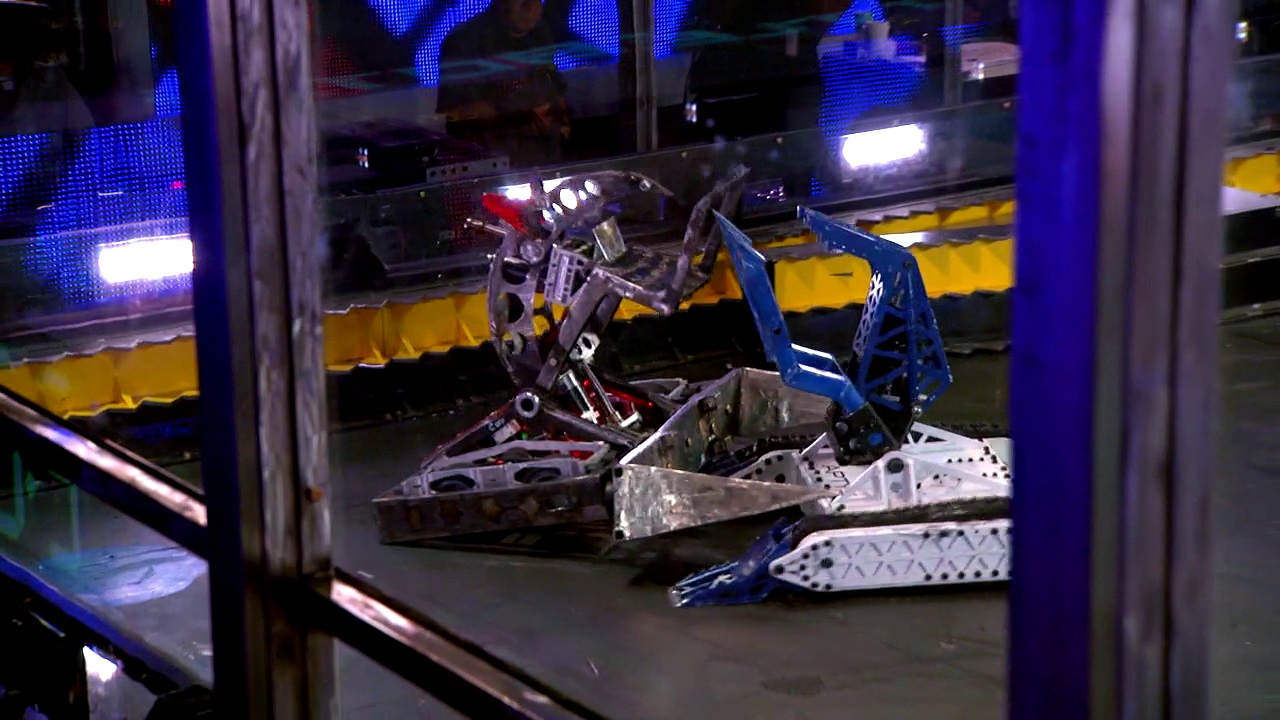 OH1 could really only be tilted back about 15 degrees before losing rear traction, and this was a key issue in why we lost the Bite Force match (besides my too-aggressive tactics, which is not really a design problem so much as a firmware issue with me). Any time Bite Force got under me with some energy, it was enough to prop OH1 off the ground.

Besides driving, the arm itself was too slow – watch OH1’s matches again and you’ll see quite a few missed lifts. I’m used to the very fast lift of Überclocker, and the linear actuator driven arm was a great deal slower than that, and lack of practice really hurt my timing.

The reasons why we went linear actuator over rotary (e.g. Bite Force and some other lifters like Stinger) was partly due to available parts and partly due to lack of experience. It was our belief at the time that you couldn’t get a gearbox heavy duty enough to handle the torques – many hundreds of ft-lb – without it being massively heavy or requiring another stage or two of torque amplification to use, which also increases weight. A linear actuator is a cheap way to get immense force at the expense of speed. In fact, Overhaul’s lower lifting fork could lift well over 2500 pounds at the maximum current of the motor, accounting for the 85-90% efficiency of ball screws. That was basically unnecessary, and should have been traded for speed somehow. Another factor was convenience – the clamp actuator and lift actuator were fundamentally the same parts, just one with a bigger gearbox.

There’s another detail which influenced the ability to grab and lift effectively. Look at where the forks end – well inside the tips of the triangular pontoons. They’re tucked in largely in the interest of anti-spinner protection – we didn’t want the forks to be the first thing a horizontal kinetic weapon hit. This also led us to make the “backboard” for the portion of the arm which dropped down into the dustpan.

It was kept that length also due to an unimplemented feature: 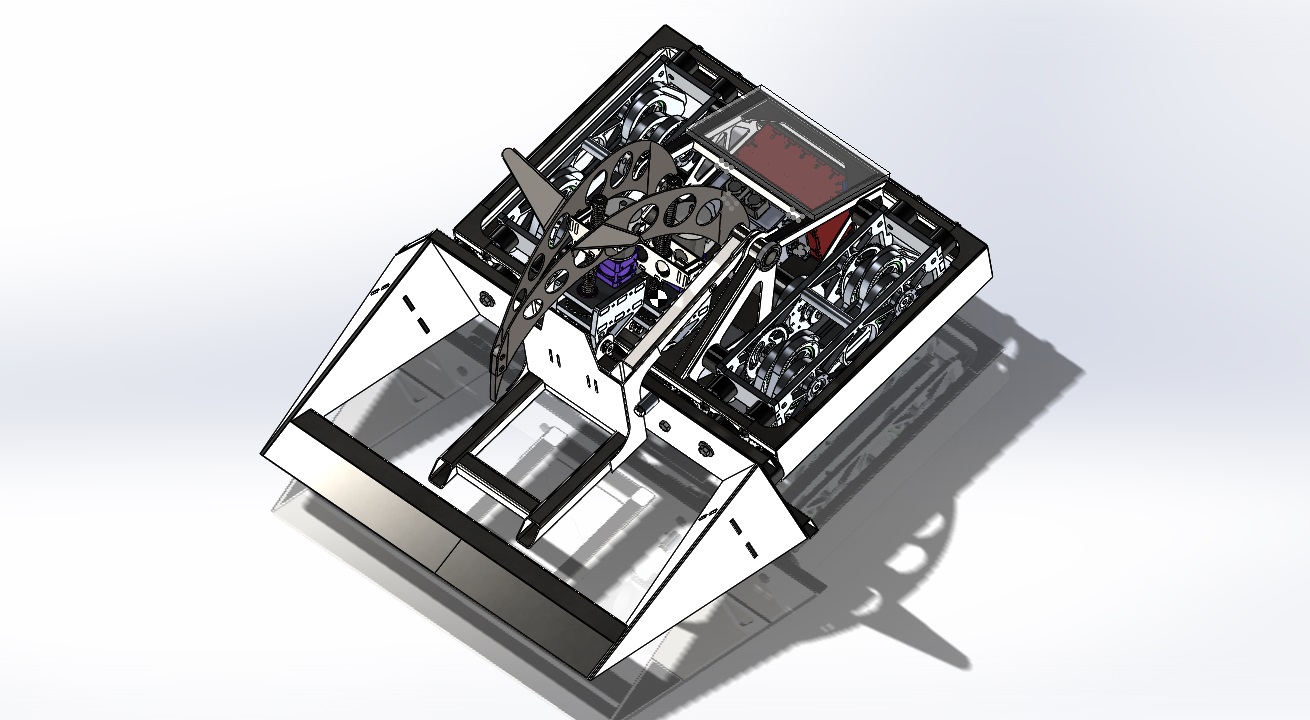 The crossbar at the front of the dustpan was going to be 1/4″ AR400 grade steel bars with some 1/4″-wall steel tubing and ribs backing it up. Not only would it have greatly increased the rigidity of the dustpan, but it would also have visually completed the bot, giving it more of a reason to occupy its nutty 42″ total length. One guess as to why we left if off…

By the way, after the tournament, I realized it was much better that it got left out. The triangular pontoons allowed OH1 to get a proverbial foot in the door in most of its  matches, where the broad surface of the crossbar might have prevented it, and also prevented more of the opponent from reaching the arm.

Can you guess the reason yet?!

In the end, besides “fundamental design flaws”, we never really had any major problems with the build or the tournament, and we frankly had a reasonable time with maintenance.  We got skilled to the point where we could pull a drive motor in under 5 minutes with tools ready, or the entire clamp arm assembly in the same time to get to the actuators, which was what we were doing when I was interviewed for the 2nd Lockjaw match; they had a penchant for bugging us for interviews and talks exactly when we needed to do something. It was definitely not “designed for service” in many ways, but we got good at it to make up for the part access deficiencies. It helped that OH1 was not very dense – a lot of it was air….

….but someow it STILL weighted 253 pounds out of 250 when done. Yup, no front crossbar for us.

Therefore, we can now designate a set of goals for Overhaul 2 that will resolve these problems.

With these factors in mind, it was time to begin playing with concepts. We begin with the first concept of Overhaul 2, drawn some time in July 2015:

2 thoughts on “The Overhaul 2 Design & Build Series, Part 1: How to Overhaul a Design”