Now that the season of Dragon*Cons and Maker Faires and everything else has finally settled down, I’ve reached the curious state of having nothing to do with my life, being between large builds in much the same way you’d be between coffees or meth hits. My day to day activities revolve around managing the IDC (excuse the cheesiness) fabrication facilities, of which there will be some updates shortly, and monitoring & mentoring the classes running in the center, including the renowned How to Make Almost Anything. I’m not a TA for the class per se, but part of the process of making sure the shop isn’t lit on fire is some times giving extra attention to those who would be most likely to do it.

That isn’t to say that my life is entirely empty and devoid of meaning. I’m tending towards taking the downtime to fix up my eternally problematic go-kart children, starting with Chibikart2. During some hard running at the Powerwheels race, I lost one of the Jasontrollers to Sudden Jasontroller Death Syndrome, a fairly common failure mode for them when they are over-run. The failure is always gate drive destruction since the circuitry is so fragile, and always not worth repairing to myself because it involves replacing so many small shitty transistors. Next up on my list after this is probably to add the electronic solenoid shifting to burnoutChibi and finally get rid of my super-rigged cable linkage. I’ve also been collecting many prospective parts for the “Chibi-Mikuvan” project, so stay tuned for a massive Beyond Unboxing the likes of which have never been seen!

But first, by popular request, I’ve added Pad Thai Doodle Ninja and Colsonbot CAD files to the References page. PTDN’s files are only made of 3D printable frame parts, but Colsonbot is the full bot – you’ll need Autodesk Inventor or a compatible viewer for anything but the STL files. All of the details on these bots are available in their respective build threads.

Onto Chibikart’s controller update. Like the dual controller mount I made for BurnoutChibi, I designed up a two-mini-Jasontroller snap-fit mount which also holds an 80mm fan. Essentially the same idea of BurnoutChibi’s. I was planning to current-hack these controllers to 40A, and for sure they will need supplementary air cooling.

The mount was printed on my Up machine, and this is about the largest object I’ve found it can handle reliably. It came out well, with minimal warping. I sincerely recommend the Up (now on 2 Plus!) to anyone thinking of getting a small hobby-class 3D printer. 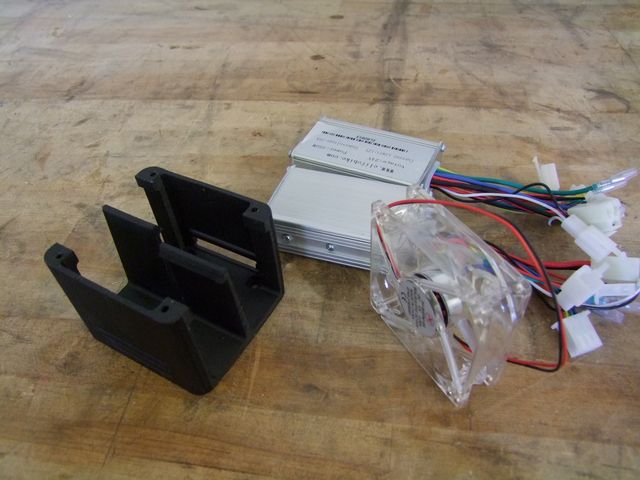 Short of popping it in the Dimension, the Up is my go-to for structural parts. The ABS formulation they use is a higher hardness/toughness than the soupy generic stuff you feed to RepRaps and Makerbots. I was concerned about the snap fits being too aggressive and snapping off themselves, but they turned out to be just on the side of the acceptable line.

The mini-Jasons were cleaned up of unnecessary wires, leaving only the motor phases, power, the Hall sensors, throttle, and the ‘regen brake switch’ which may or may not be wired in in the future. The regenerative braking on these things is a fixed low current on-off kind of affair, so it’s not very helpful.

I plucked the 80mm case fan from stock – there’s nothing particularly special about it. 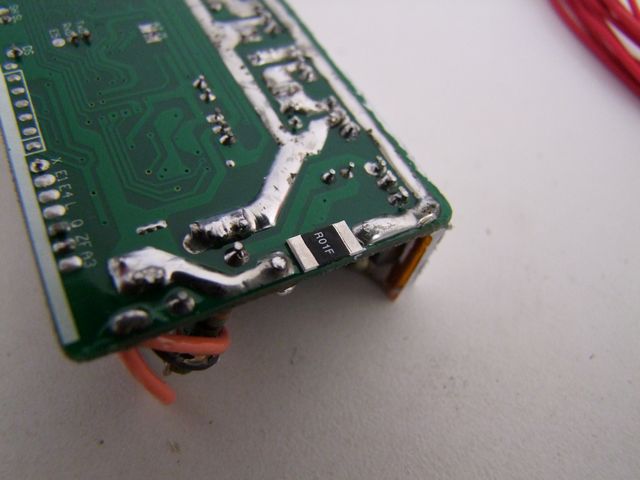 In the past, I’ve current-hacked these things with a blob of solder on the current sense shunt, but it’s such a bad hack and is unreliable – I’ve actually had the blob melt back off before. To remedy this, I began looking for large current shunt resistors packages that fit in between the leads of the existing shunt. This is the result – for a mini-Jason, a “2818” (.28″ long, or so) package current sense resistor is a nice fit. One that is 8mm (“31xx” – “35xx”) will fit even better and not require much solder bridging would fit better, but I could not find any that were not also square in shape – rectangular, the long way, is preferred.

I actually had this hack vicariously tested by Daniel (YAMEB) a while back. These shunts are 5 milliohms (not 10 – I measured erroneously the first time), so it took a nice sandwich of 10 milliohm resistors to get my 40 amps. The exact part number I used was WSHA-.01CT-ND, and it has a 5 milliohm brother in the form of WSHA-.005CT-ND. 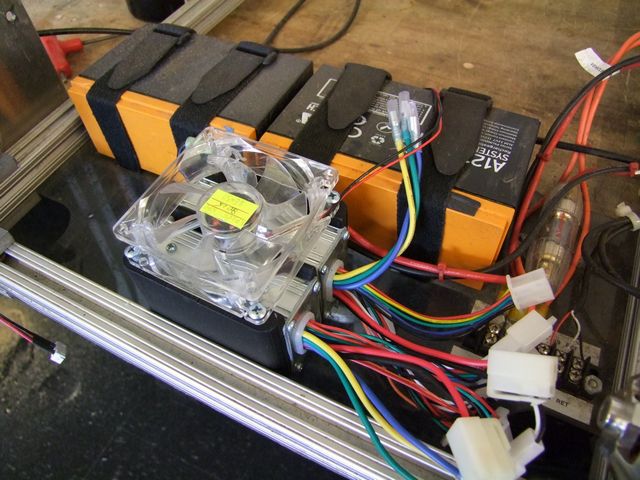 I cleaned up the floorpan of Chibikart after removing the old Jasontroller – it was positively disgusting and filled with 2 years of floor grunge buildup, plus mud and dirt from running at two slightly wet Maker Faires. The new installation drops right into where the old controllers used to sit, after redrilling some mounting holes. 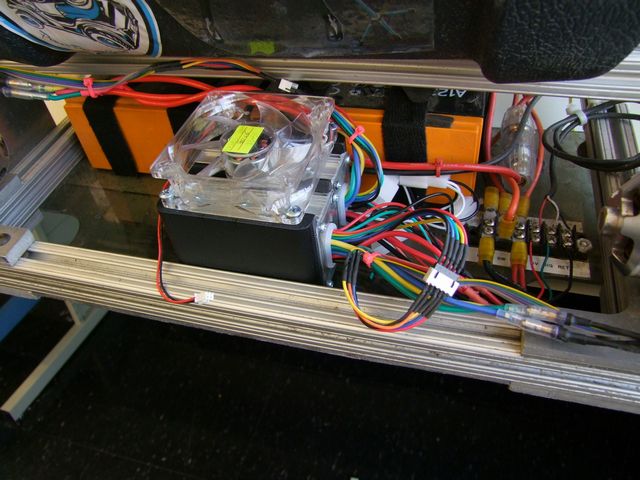 Systems wired back up. The first test drive was without the fan hookup, and without the sensors connected.

To rehash, these controllers “self-calibrate” sensors if you connect them and then run once to full speed. I couldn’t achieve this on the ground since the vehicle never really reaches “full speed” in the space available, so I had to freewheel it, being mindful of the 4700rpm-ish commutation limit. After one power cycle, the controllers had learned the sensor configuration and Chibikart could apply “static pressure” to something again. To get a good transition between sensored and sensorless, the sensors have to be aligned properly first (check out Equals Zero Designs’ page where I have an actually well documented example.) – and that’s all you need to do, not actually try and optimize their timing position. 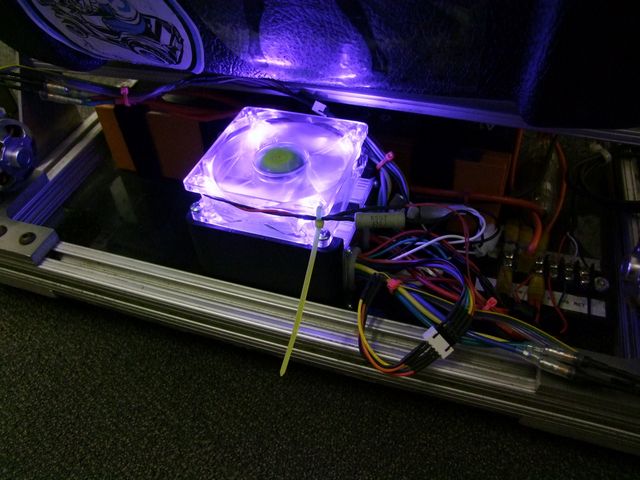 This was, of course, the important part.

Now, the 12v PC fan could not handle 24 volts, so I just dropped a giant 40 ohm resistor in line so the fan only saw about 15v. This resistor surely dissipates more power than the fan actually removes…

With two motors on 40 amps, instead of on ~25 before, Chibikart2 is way more fun. Not, say, tinykart Black Edition level fun, but it is far more peppy. The small Colson wheels are starting to reach their traction limit. 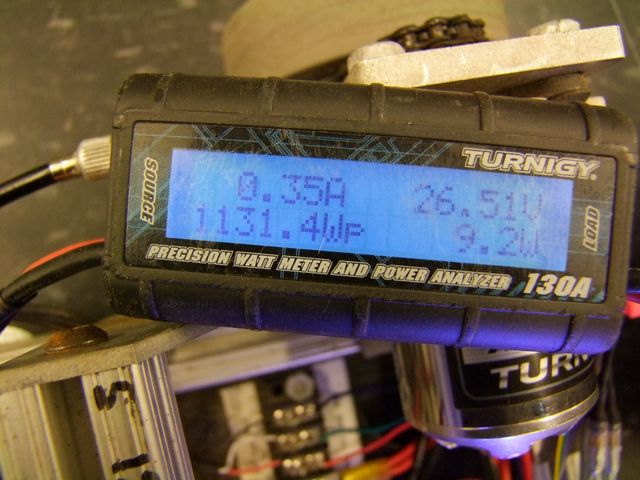 I hit 1.1kW on indoors testing, and there is much room for improvement yet. Because the controllers are doubtlessly still running constant current before I run out of hallway, the power will only increase with vehicle speed.

Say, I haven’t garaged something properly in a long time (mostly because said garage was under repair construction this past summer). Maybe it’s time to take Chibikart back to its proving grounds.

Next, some of the ongoing facilities improvement projects that I have going on in the space! The place is kind of like I-95 around New England – always looking like someone’s working on it and the construction shifts every once in a while. I swear, though, it’ll be over soon – just like they say in Connecticut (In my six years in this area, I have never once driven through 95 in CT without hitting some kind of construction…)

First up, a full size Shopbot – the full 5 x 10, gifted by the Architecture department. I’ve been itching to have one of these for a while – with an 1/8″ carbide bit, they’re practically mechanical waterjets! Expect some Shopbottables to emerge on my end soon due to the “It’s the closest tool next to me and I don’t have to ask anyone to use it” effect. It will be very handy for producing Chibi-Mikuvan’s body panels since they’re all larger than what can be stuffed into the laser cutter. 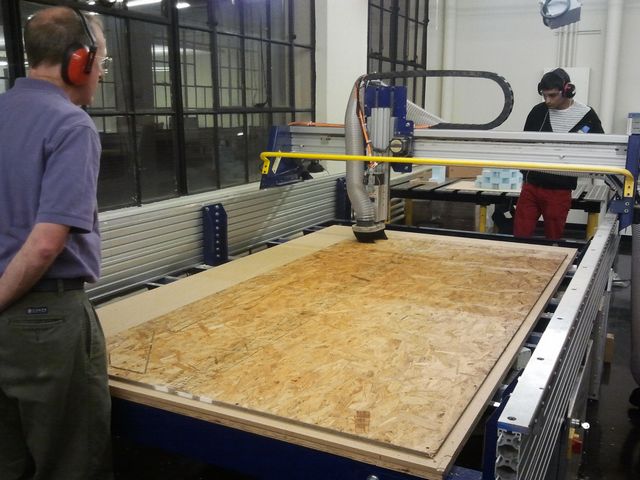 Above, Media Lab students operate the machine as part of the MAS.863 “Build something big” week. 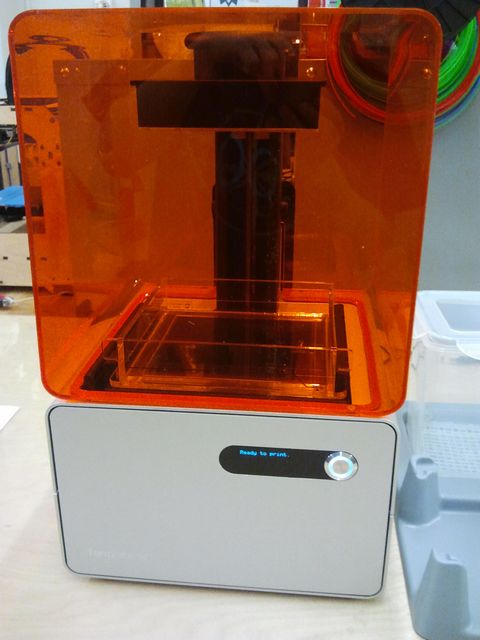 Next up, the legendary Form 1. Full disclosure: There’s four Form 1en in the space at the moment – this one is “The Lab’s”, and the rest belong to researchers and classes residing in it. Four. That’s more forms than Formlabs (okay, probably not), but the Form 1 density must be up there. 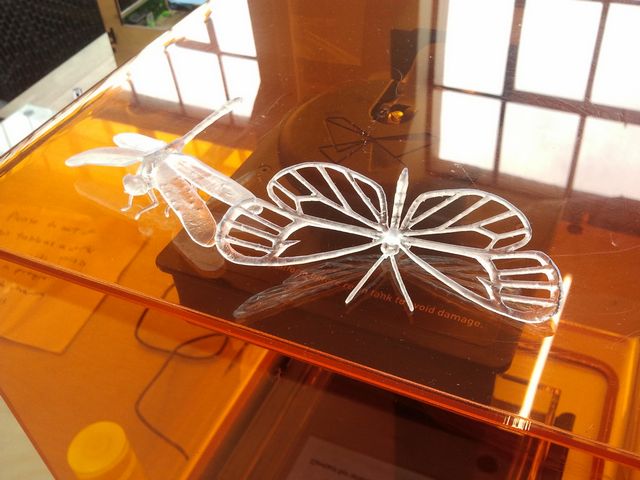 The Form is a SLA-like machine which can hit much higher resolutions, but the  material isn’t too strong – it’s an acrylic resin, so it has some mechanical strength, but does shatter and snap. Dat rez tho…

These are some of Brian Chan‘s insects. Check him out on Shapeways! I also printed the crab, lobster, and some other doodads from his collection. 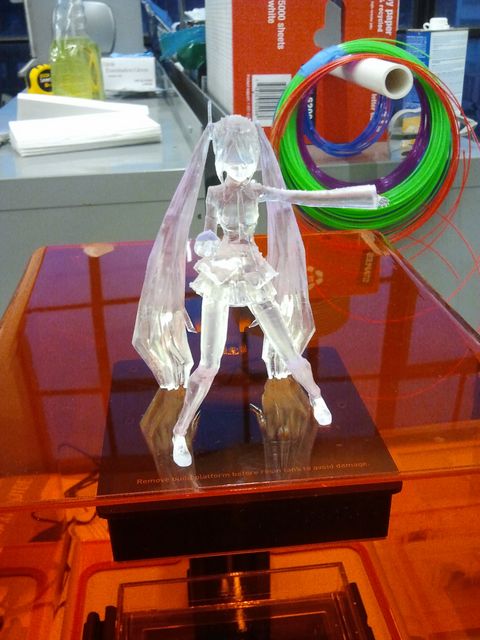 Of course, with every 3D printer that makes it in here…

The  model is “Pillared Miku” though I used the version without built-in pillars – the Form software generates its own support lattice.

Now, moving up in the Expensivity scale is our latest acquisition: 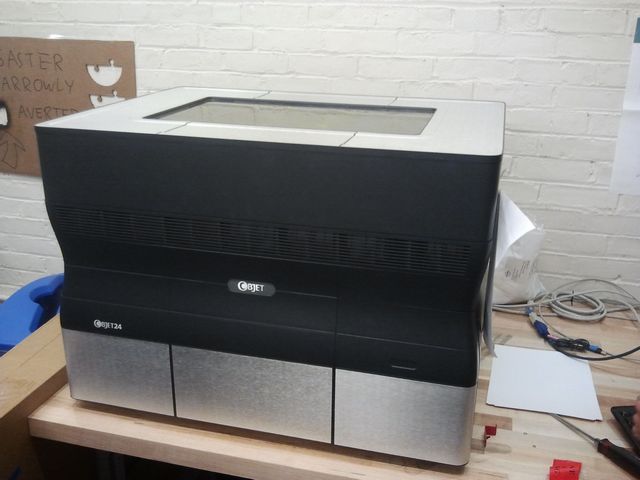 An Objet24 (By Stratasys™)! This is just contributing to the slow rounding out of 3D printer technologies in the space. Objets are incredibly high resolution, very nice, and very expensive. This unit was purchased used from a local company for only $7,000, but you’d easily eat up that much per year in materials alone. The Objet Goo comes in 700 gram jugs that each cost $300-350 and up.

And this is the entry level machine. 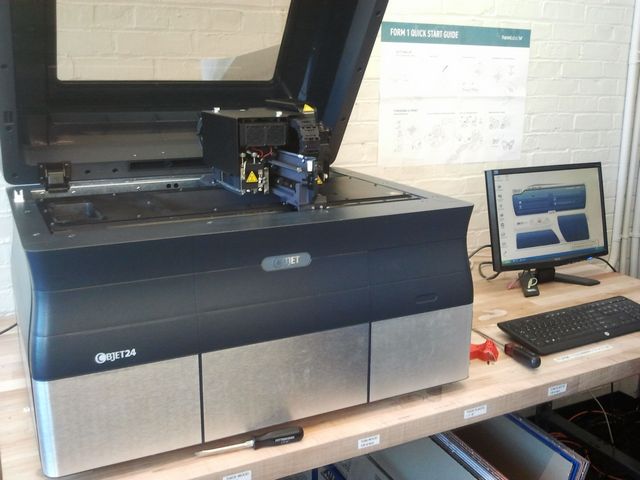 The Objet technology combines SLA (light cured resin) with inkjet style nozzles so it can control the deposition very finely. No giant bubbling cauldron of goo here. It also has its own Windows XP computer built into it.

Now, I know XP is pretty much the OS that saw the Internet grow up with it, but this machine was built in 2011…. 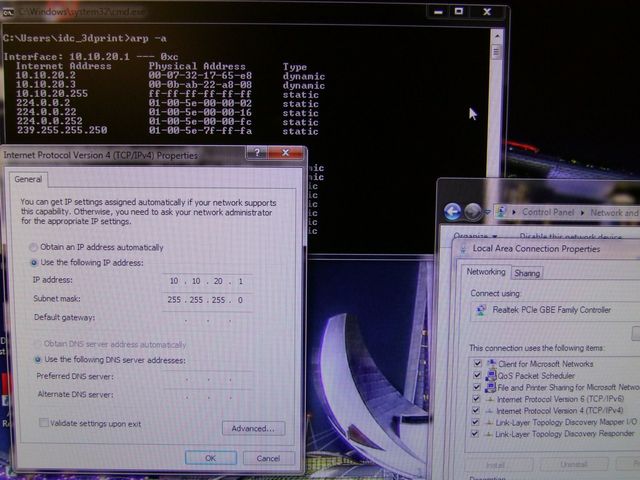 …and even worse, it requires a very specific network setup to talk to. Objet-Stratasys (ObSys? Stratajet?), I’m going to publicly shit on how bad the Objet communication infrastructure and software are. I should not have to configure a point-to-point LAN, disable Windows Updates, and disable firewalls just for it. The whole setup procedure gives me the vibe that they had to ship the machine and had 1 day left to write the drivers, so took whatever the developer’s computer was at the time and just made that the exact requirement. That, or given Objet is an Israeli company, probably just opens your computer up to direct monitoring by the Mossad.

I’m amazed I didn’t have to start Space Pinball and log into Pandora before the printer would communicate.

The slicing software is also slow, prone to crashing, and has an inconsistent UI. For such a beautiful piece of hardware, the software end of it seems so incredibly rigged. 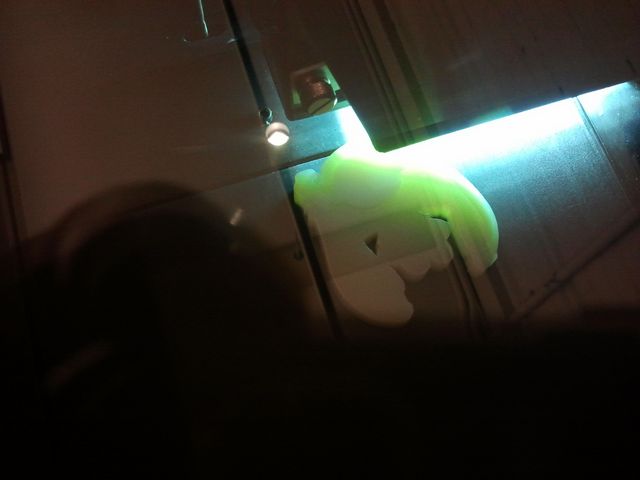 Of course, the first thing to do with every 3D printer that makes it in here…..

Yeah. This was like a $30 Miku given how much of the material I used. 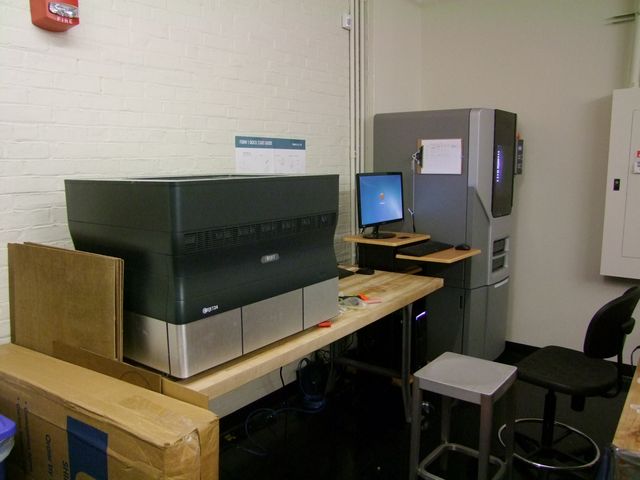 This corner of the room has been reconfigured to become what we now affectionately call “printrgartn”. The Form 1 is immediately off to the right, as is the Replicator 1. I’m trying to commission an Up for the lab (in supplement to my personal machine).

What’s absent, sadly, is a powder printer. I need to do some Powder Print Affirmative Action here.

One thought on “Loose Ends and Tag Closing for Bits of October: Site Updates, Chibikart and Mini-Jasontrollers, New Expensive Things!”