“Summit”! Do you get it!? It’s a summit, like a meetup or conference. On a mountain! And you call mountaintops summits. Wasn’t that smart of them?!

I’ll never let that one be lived down.

It was an eclectic (dare I say electric?) gathering spearheaded by one of the area electric vehicle bros, Ted, and it all came together at the base camp of the Mt. Washington Auto Road. I was inhaled by the draft of everyone planning on going, a few days before the fact… with a broken window and all, and figured it would be a great chance to spy on everyone elses’ hardware and get some inspiration. And so, Mikuvan got to climb 4,600 feet to the summit of Mt. Washington (and get back down), and I got to see some of the latest production and custom EVs up close.  I summitted with the EVT Porsche, which was brought for the purpose of climbing Mt. Washington for the first time. I was part of the escort on the way up, and the… uhhh, “brake van” on the way down to prevent Shit Literally Going Down. Now aren’t I glad my brakes are in seriously awesome condition?

Early on Saturday morning, I pitched RazEr and Johnscooter in the van and headed north. Little did I know that they’d be both completely useless at the event venue, but hey. 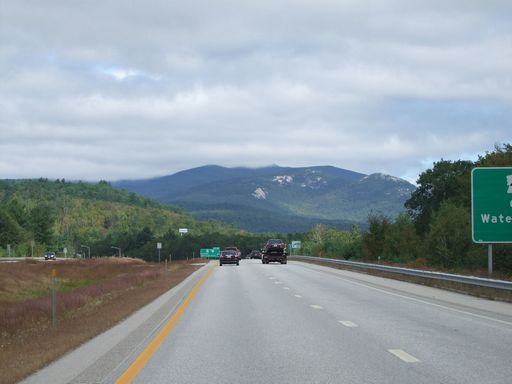 The adventure begins with a roughly 3 hour drive to middle-northern New Hampshire. I am under the impression now that New Hampshire is made entirely of mountains, forests, and campgrounds. No wonder everyone who lives there is a freedom-loving rugged mountain hermit… 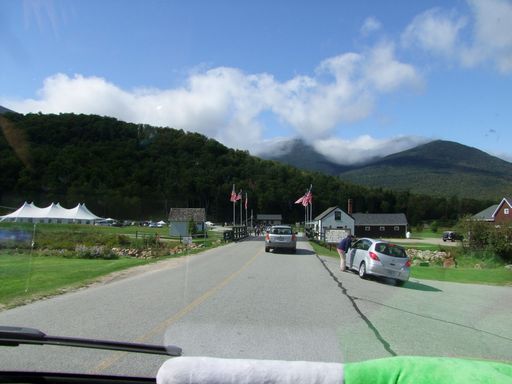 The scene of the event was the ‘base camp’ of the Mt. Washington Auto Road. The Road was nestled in a valley between two mountains, south of a little one-street town. To reach it entailed travelling on several small state roads, which threaded through additional little towns and settlements. I have this hypothesis that small-town America is homogenous across cultural regions, and I definitely felt the familiar vibe here as I did in southern small towns when I was younger.

Not sure if I’d be able to deal with the inconvenience of not being able to stumble downstairs and across the street at 4AM for a burrito yet, however. Clearly, Big Chuck’s Robot Warehouse needs an integrated burrito joint. 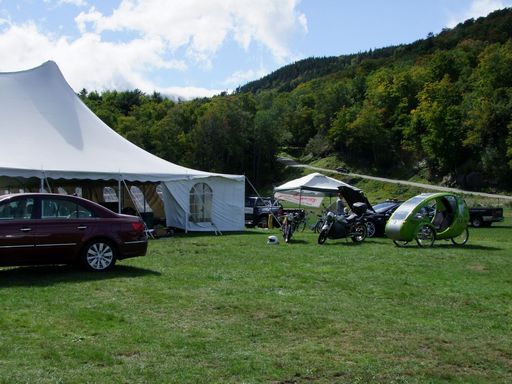 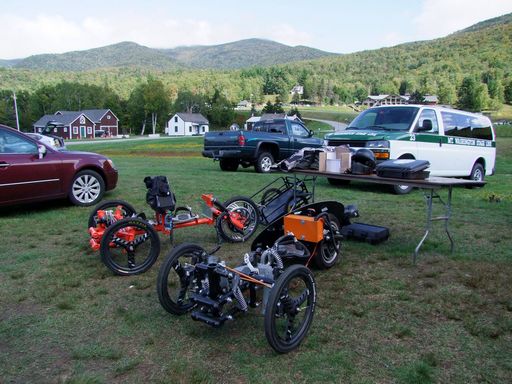 These things were pretty rad. They’re Tribeys, by Black Sparrow Industries – think LandBearShark‘s more generally mobile cousin – you stand on these sideways like a board. They have a big hub motor in the back and a steering linkage controlled by rider tilt. 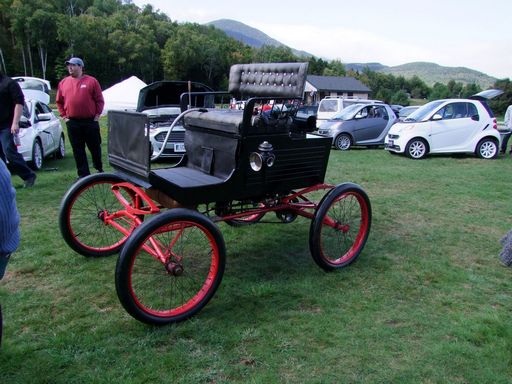 One of the highlights of the event was an original Stanley Locomobile – not the original which climbed Mt. Washington in 1904, but one from the same era. Looking at the technology on it really is a testament to how refined the modern automobile is, but all the same basic systems were recognizable. If I jacked Chibikart on 26″ slick bike wheels, it’s almost part for part. 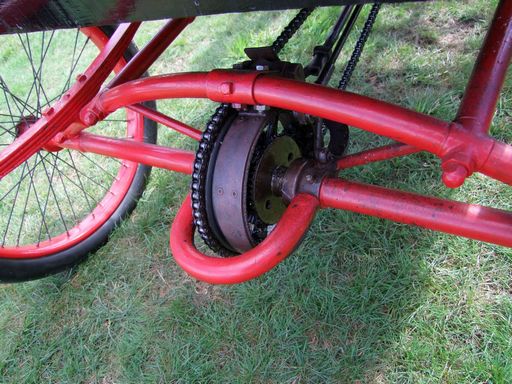 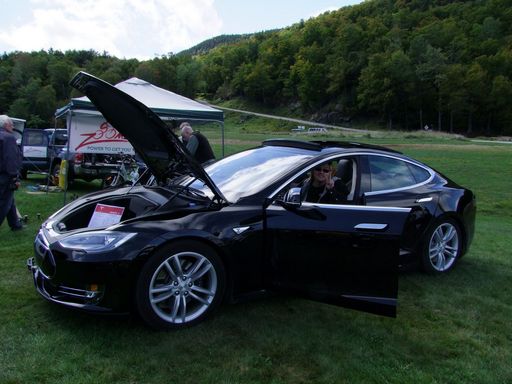 Why yes, this is my other car.

The usual commercial suspects – Nissan Leaves, converted plug-in Toyota Priiii, Volts, and of course Model Ssen, were present. At least two distinct Model Ssen rolled in and out throughout the day, and like 3 Volts. 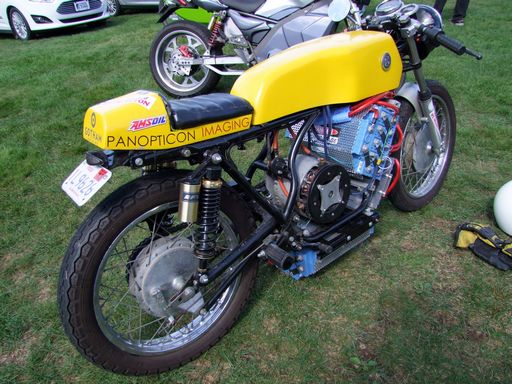 One of Ted’s bikes. The last time I saw this thing was at the Somerville mini Maker Faire, when it still had a bucket of Hobbyking lipo packs. I got to ride this a few laps around the campground area – gobs of torque to be had from the Etek/Mars motor. 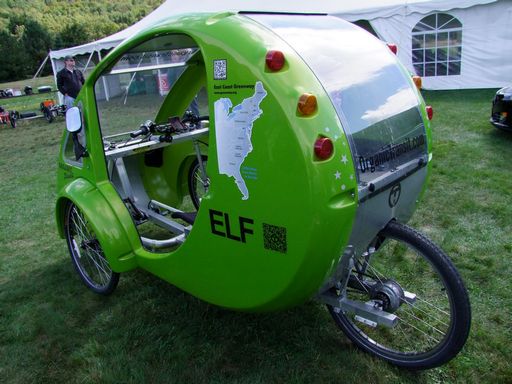 Another quirky “alternative transport” machination, the ELF. Designed for hybrid pedal and electric power, it’s more or less a trike with an outer shell. 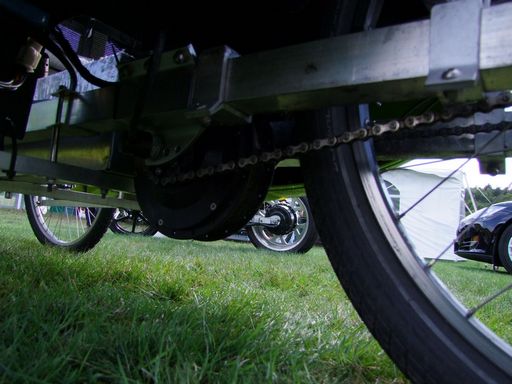 Under it was a Crystalyte hub motor being used in a… not very hub motor way. I noticed a few of us had some laughs over this, but it’s a 100% legitimate way to use any motor, even a “hub motor”. Power is, after all, composed of both torque and speed, so for the same torque, you have more mechanical power if you can get more speed. Hence, running a motor on a higher voltage (than some reference design) and gearing it down more is a sure fire way to get more performance, and also a possible way to get more efficiency out of the system. 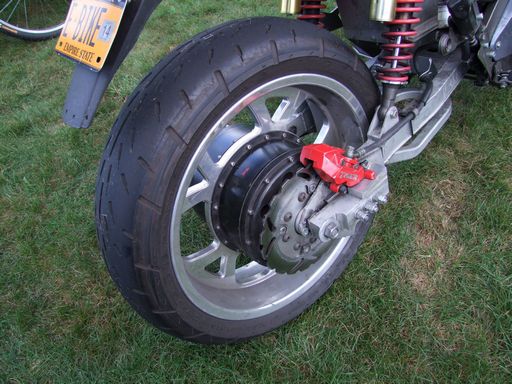 I’m a hub motor aficionado, so I took particular interest in everything equipped with hub motors. Here’s a full size electric motorcycle with not one, but two hub motors cleverly hidden in where the rear hub would usually be. The motors are discrete, so to change a tire off the rim, you’d just dismount the motors. Compared to a system where the rim is somehow part of the motor, or requires dismantling an endcap of a motor to get to, I think it’s a better system. Plus, more torque. Double the torque. 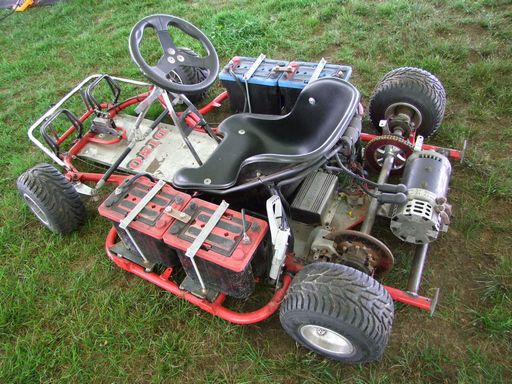 All flavors of electric rideables were in attendance, including this redneck cousin of Cap Kart. Lead and series-wound DC motors, still the baseline of EVs everywhere. 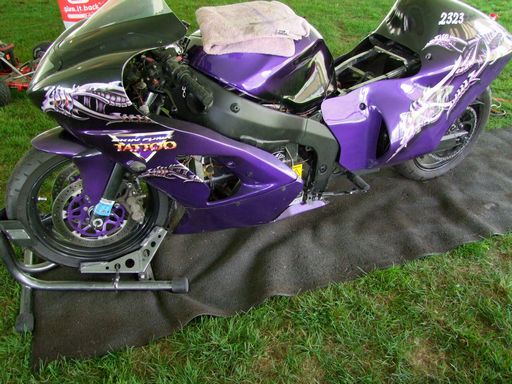 The alleged fastest street-legal motorcycle, Electracutioner. It used, of all things, a giant GE series wound motor mated to a rack of what I could only see as private-label Hobbyking lipo packs. Brute force motor with brute force energy. 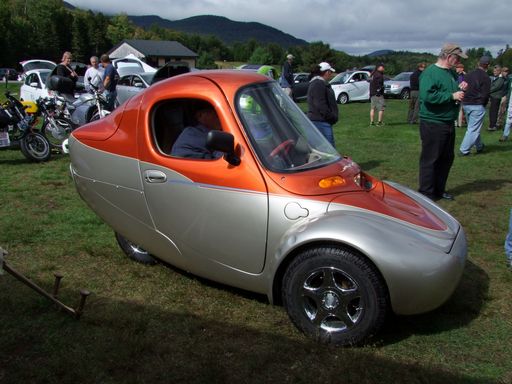 Another fancy bubblecar, the Corbin Sparrow. Check out the “golf ball” texturing on the backside of the fenders – it’s also present on the underside rear of the vehicle. I overheard the designer, or perhaps a fan that sounds really like the designer, claim it makes a few percent improvement in the range of the vehicle. 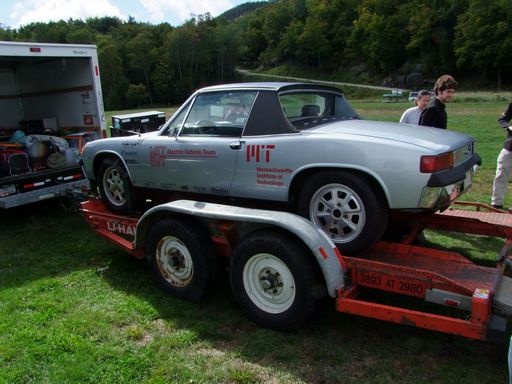 The MIT EVT rolls up with the Porsche and a few other toys. 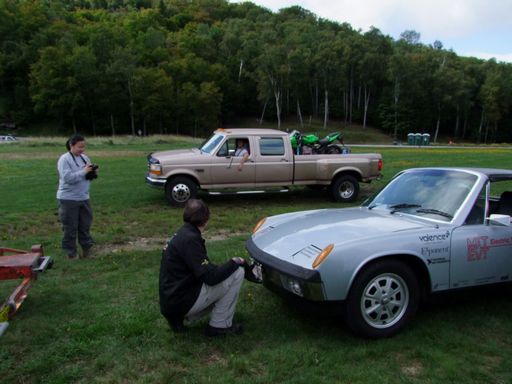 A few moments later, and completely annihilating the carbon footprint of the event, Adam shows up with Lipobike in tow. 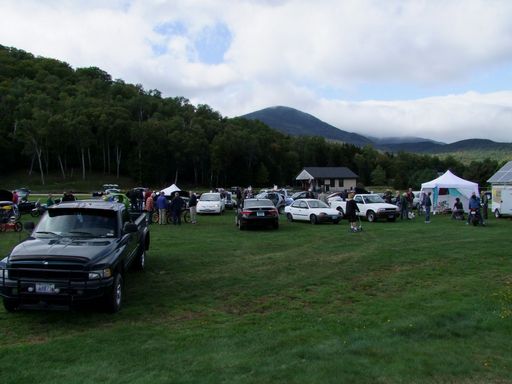 By mid-afternoon, the event was at peak liveliness. You can see me desperately trying to ride RazEr around in the middle there. Hey, it worked some times – when the grass was flat, but not muddy, and not rocky! 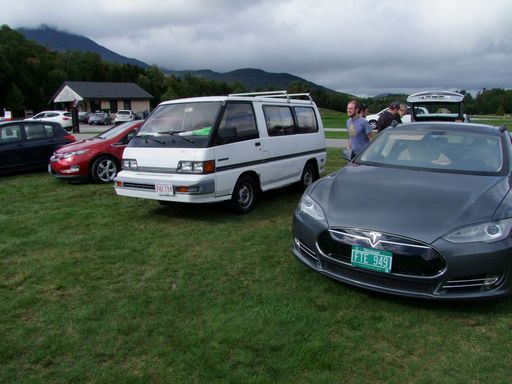 Your “LOL HEY GUYS” picture for the weekend. 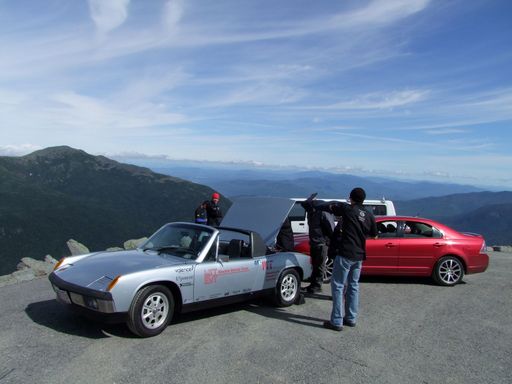 I didn’t really get any good pictures of the convoy starting to go up the mountain, but here’s the EVT group at roughly mile 5 of 8, pulled off to inspect the status of motor systems. 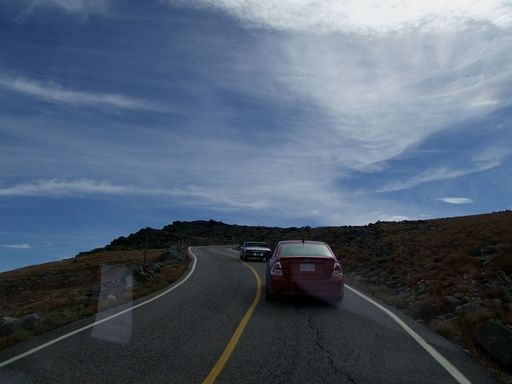 The Porsche nearing the top. There were several occasions when the upward-traveling convoy had to yield to downward-traveling traffic, and the Porsche… uhh, didn’t have enough torque to start again. Presumably it’s a rotor-lock protection in the motor controller, since it didn’t even try. A gentle push was needed to get it started again.

Maybe the Azure Dynamics controller is just a giant Hobbyking ESC inside. 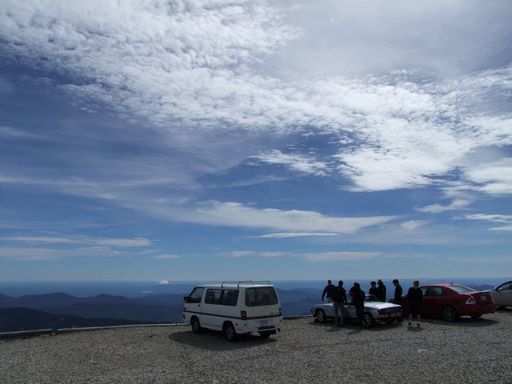 And the group has summitted.

We stayed up at the top for about 2 hours, then began the careful trek down. I led the convoy down since I had a really tall first gear that basically made 20-25mph the no-effort engine-braking-only descent speed (and which makes for surprising agility in low speed city maneuvering), so I had braking overhead to stop anyone else just in case. Every 2 miles, the convoy pulled off and students scrambled around with IR thermometers to check brake temperatures. The Porsche consumed about 50% of its pack on the way up, and regained something like 25% on the way down, and Model S owners were reporting 25-30 miles added back to their ranges.

It shows that regenerative braking is 1. pretty cool and 2. not entirely bidirectional on the average because you can’t capture back most speed-dependent steady state losses, and batteries do not charge and discharge symmetrically. Regen is often touted as some kind of miracle in EV marketing and very misunderstood. Maybe it’s time for an Instructable… 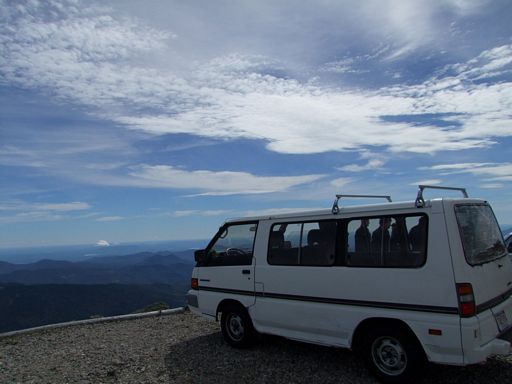 Here’s one of the “nice pictures” I took at the top. 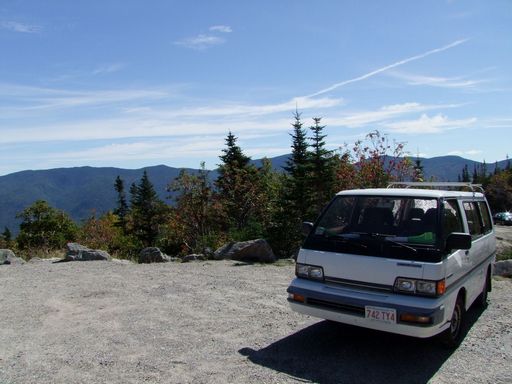 And one I took on the way up, near the 4 mile marker!

The party ended around 3PM, and pretty much everyone was back in town by 7PM.

Overall I consider this a worthwhile adventure, and it showed me a lot of the smaller end of EV hardware (plus, I got to van-camp for once!). Unfortunately there weren’t any custom electric car conversions, something I was sort of itching to see. Essentially, I was hoping to use this trip as a mental make-or-break for the still-on-the-agenda EV conversion, I swear. I figured the next 5 to 6 months was a period of time when the weather around here is too damn disgusting to drive anywhere, so if I could be convinced that the work could happen during that time, then I should begin immediately.

That how it would proceed if I had infinite money, anyway, since in my estimates I would probably still need to drop the higher end of several thousand dollars to get an electric powertrain for Mikuvan operational nicely. Not a motor and a knob glued to the center console, but functionally transparent to how it is now. It’s really not prudent for me to try and assume that I can consistently spend a ton of money over the next approximate year at this point. I am, after all, not yet Elon Musk and cannot yet troll space, and the last thing I want to do is to get halfway done, then be forced to give up or abandon the project for some reason.

Besides, you don’t just take apart something that has gone almost 7,000 miles in the past five months (early 4/5ths of that just by means of epic road trips) without so much as a hiccup or misfire, then put it back together in a less useful (comparative) position – that’s taking apart the castle for the stones when you have to spend thousands of dollars to pile the stones in the shape of a slightly different castle, all for your own amusement.

So yeah, I’m still totally in denial about it, but I think Mikuvan will remain stock for a while to come. That, or it’s time for another van!