The (physically) largest and most (spiritually) ambitious engineering project I have embarked on yet moved under its own power, finally, after nine months of on-and-off work, like some bizarre, monsterous electromechanical pregnancy. There’s still development to come, such as adding some form of braking as well as making sure the throttle is not held on by a strip of duct tape.

But alas, the giant is stillborn. You saw this coming, didn’t you?

Anyways, some pics of the completion. 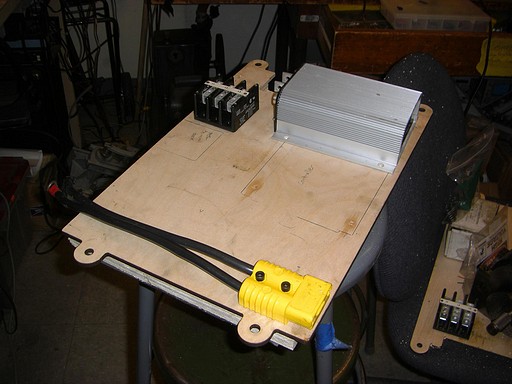 The glue has dried.

Now it’s time to lay out the electronics!I had no particular layout in mind, so it was clamp-and-drill in a semi-oriented fashion. I did make sure that appropriate connection points were on the appropriate side of the board, however.

While using machine screws in wood seemed like folly at the time (and still does), I didn’t have wood screws of the correct length. 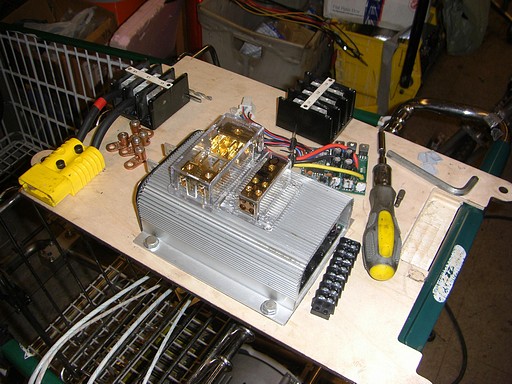 More goodies start appearing, mostly scrounged. I discovered some copper screw terminals designed for 4-gauge wire in a box full of Jolt-can-sized capacitors. The golden blocks are car audio power distribution blocks, spares from the car project. The three-terminal Wiring Blocks of Convenience™ were found in a box of giant industrial contactors and switches.

The large controller is a Kelly KBL72201, 200 amp with regenerative braking ability. The car used 4 of these with a custom control interface, and they give a pretty good bang for the buck (with the bang/buck ratio being a little under 2 for the highest-capacity ones, assuming bang is measured in amps and buck is measured in 2009 U.S. dollars). 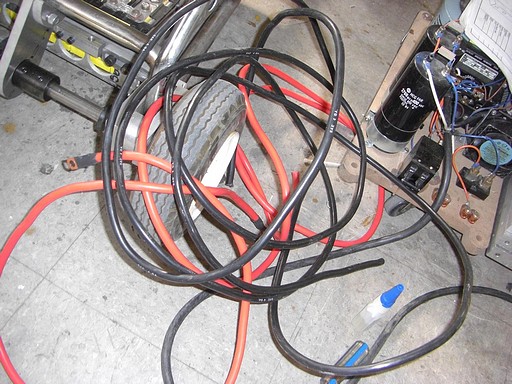 Speaking of 4-gauge wire, here’s a few feet. I wrestled this stuff around for a few days getting the car wired up, and these are leftovers. Requisite handling tools included a sharp razor blade and pliers for stripping, a hacksaw for cutting, and a bench vise for crimping on connectors.

This time, I had an upgrade – instead of a hacksaw, I got to use a BANDSAW! Rejoice! 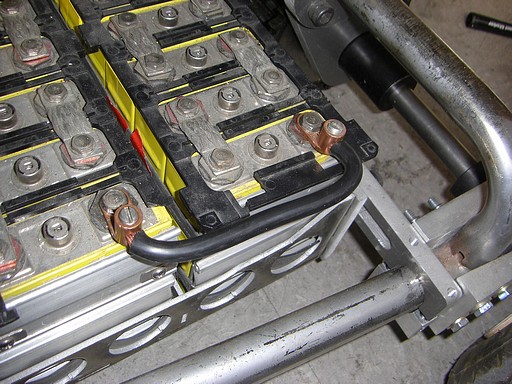 Here’s a battery interconnect. These are made of the aforementioned 4-gauge wire and two copper terminals. 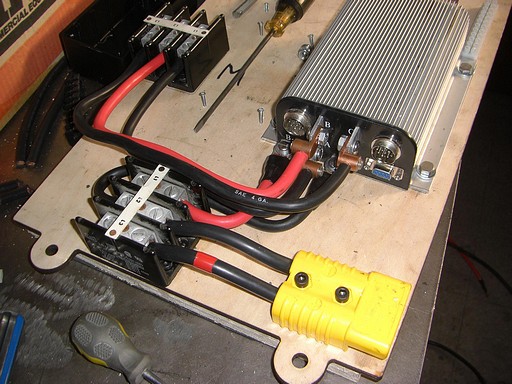 Most of the SERIOUS FUCKING \M/ETAL routed.

I tried my best to make this assembly as modular as possible. Notice the three terminal blocks surrounding the controller. The bottom-most is a main power block, and the other side is intended to go to a master power switch, then back to the controller. The leftmost is the motor output – conveniently, three wires for three phases.

The tiny terminal strip at the top is for signal connections from the controller.

This way, nothing is hardwired to a particular component. I could have just as easily duct taped all the wires to eachother, but that’s not a very sustainable activity. 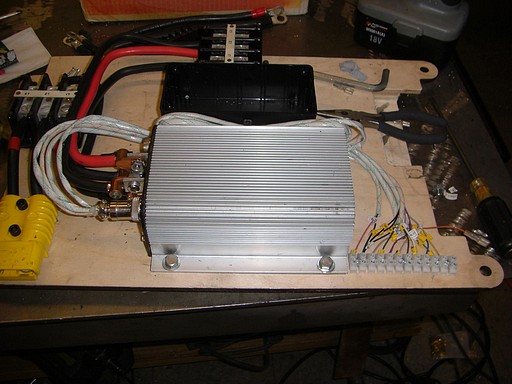 Signal wires brought out of the controller and onto the terminal strip. Luckily for me, Kelly Controls sells premade labeled & shrink-wrapped signal cables. 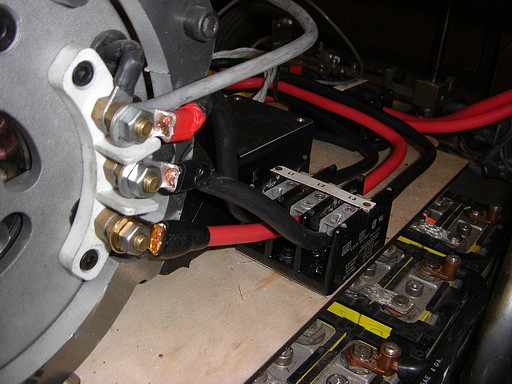 Short motor wires for minimal loss! I used a variety of giant connectors, some scrounged from spare parts bins and others yanked off existing giant wiring. 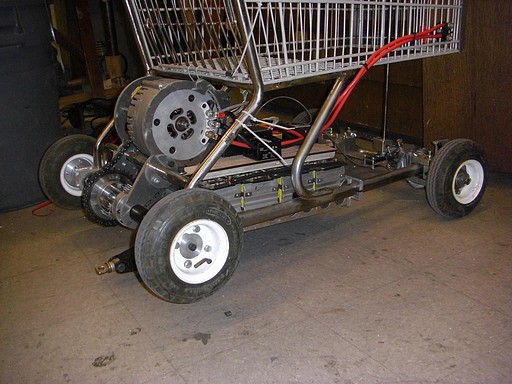 The magic moment arrives. With controls hooked up and switch installed, it was time to perform the first live power test!

But like a good CNC machine, I looked ahead in the program a bit and decided that maybe, just maybe, jacking the rear wheels off the ground would be a good idea, in case of some stupid error, such as a reverse-wired motor, the 200 pound kart goes balls to the wall backwards. Maybe literally, and possibly with someone else‘s balls.

I hit the power switch, and…

No, it didn’t blow up, but the motor instantly jumps to full speed. 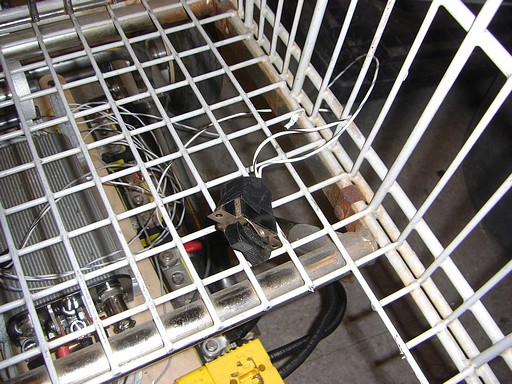 A quick installation of a reverse switch (instead of guessing at what combination of power leads need to be turned around) and I was in business. 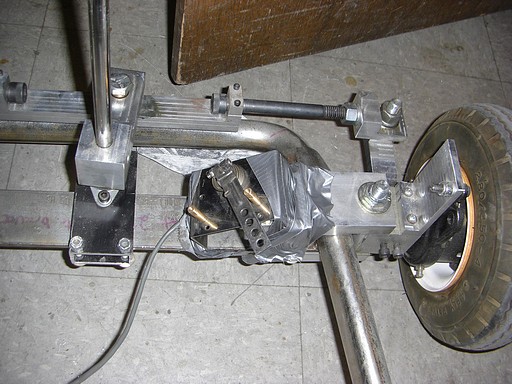 This is the best part about the whole first test run. The throttle lever was retained by duct tape and there was no braking to speak of. As in, none. Zero. The little band brakes weren’t yet hooked up, nor did I have another springypot handy for the controller to perform motor braking.

All that stopped me (LOL PUN) from certain disaster was drivetrain drag and air resistance. Nothing could _possibly_ go wrong like this. 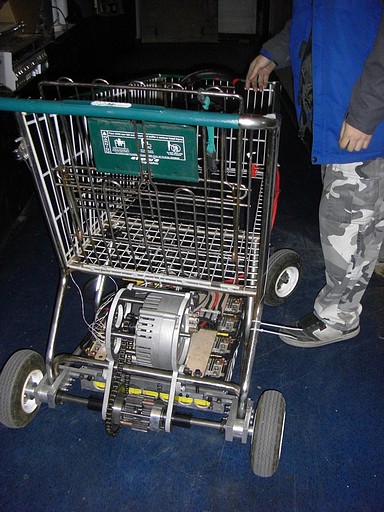 So let’s bring it outside. I wanted to finish this test setup by sundown, but didn’t quite make it. The first (dark, shaky, blurry) test video is here.

All things considered, I think it was a great test run. The frame survived numerous potholes and high-speed curb landings. Nothing seemed to come loose or fall off.

The battery basket worked as designed. I was, furthermore, surprised by how well it handled at high speeds. You’d expect the center of gravity to be dangerously high, but it wasn’t – with about 100 pounds of batteries about 3″ off the ground, it’s actually exceptionally stable. 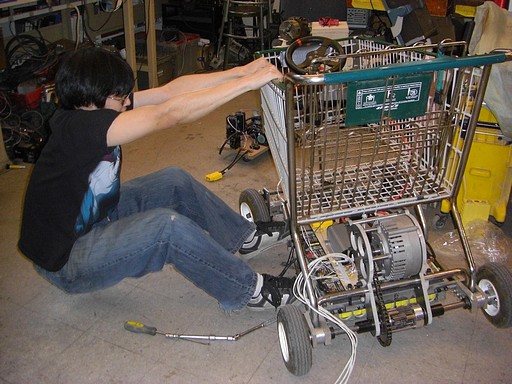 After 10 minutes of putzing around, we decided that it would better to test at a later time… you know, when cars weren’t coming and going regularly. I brought it back inside, then went away to get dinner.

When I returned, I went to flip the power switch, and everything exploded. There, that’s the kicker you all were waiting for!

A bright blue flash emanated from the rear of the controller, accompanied by firecracker sounds and a small cloud of black smoke. Needless to say, I flipped off the master switch as quickly as I flipped it on, but it was already too late.

Of course it was the electronic side of my project that magically works and then doesn’t work. The same thing happened with RazEr a few times.

This time, however, I have absolutely no idea why anything could have failed. It’s not like the controller was something I cobbled together in a night, hanging together with alligator clips. It’s not like I even attempted to modify or change anything in the hardware. I literally left it alone for half an hour.

Now we know why I’m not EE/CS. Because if something doesn’t work in the world of mechanical engineering, you can usually see why.

After flipping the switch back on just to see the last few FETs fizzle out, I started removing components and probing around. I did discover one suspect – the frame had continuity to battery negative, through the throttle potentiometer – I had neglected to notice *how* I was duct taping it to the metal frame, and accidentally the pot terminals. Nothing else had low impedance where it shouldn’t have. Hell, the entire thing is mounted on wood.

But would such a thing be enough to destroy the power amplifier? Questions remained after this, such as

Regardless, I’m bummed, because I’m out the mo$t importan£ ¢ompo₪€nt. Hell if I can get Kelly Controls to budge on a swap unit – it’s $100 to send it in for replacement.

Nontheless, here’s a (95%) final shot. Note the important addition, the single large revolving light at the front.  I have to have my priorities, after all, and this was far more urgent than, say, brakes. 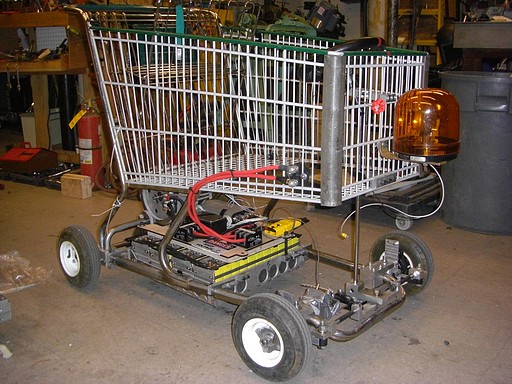 But I didn’t get to test it.

And maybe a working electrical system.