This would actually be update 12 if I didn’t count the co-update with the battery meltdown. However, I did.

In the last LOLioKart episode, I had settled on a scheme for mounting the giant NiCd packs in the frame. 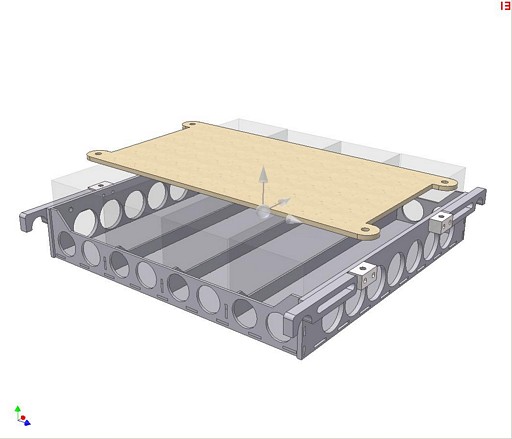 Generally, in life, it’s a bad idea to put all your eggs in one basket (or invest all your savings into a single financial avenue…), but in this case, it was the easiest and most compact. The “4-across” method kept all the packs next to eachother and the space above them available to mount whatever else – in this case, the retaining plate was to double as a fixturing surface for all the electronics and wiring.

So I whipped up this quick “basket” with compartments, each of which holds one pack with some spare volume that I can fill with shock-absorbant materials, important for a suspensionless vehicle that will eventually travel over streets whose most ubiquitous surface feature is the pothole.

I mean “whipped up” pretty literally, because several hours after finalizing the design, I committed it to aluminum. 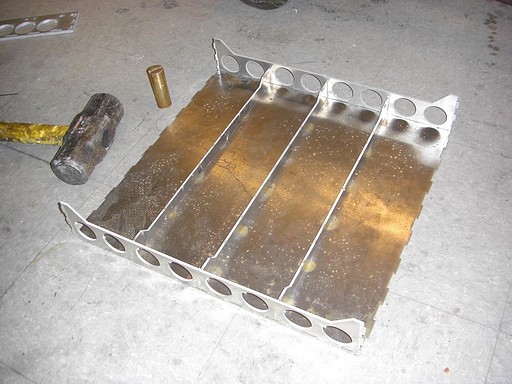 Part of what I find appealing about working for the Media Lab is the degree of “have metal, will build” that it promotes in my building habits.

Maybe that’s actually a bad thing, since I’ll admit to becoming increasingly spoiled by quick access to neat things like waterjet and laser cutters, and have started basing all of my builds around them.

Anyway, shown is the waterjet-cut basket undergoing assembly using my favorite tools for such an activity.

One of my now favorite methods of “expedited construction” is erecting 3-dimensional objects using 2D (flat) cut plates with slots and tabs, which allow them to interlock and assemble into something more complex. This is similar to those old “wooden model dinosaur skeleton” toys, and “chinese puzzles”… In fact, the latter is what I always call this method of construction, since I don’t know if it actually has a name or not. It’s a bit tricky to get used to, and accounting for cut kerf and corner radius (especially important on waterjet cutters) is somewhat of a trial-and-error process, but I couldn’t have built NK5 in a day without it.

If you get ambitious, you can even put orthogonal screw-and-nut slots to make the whole assembly stronger as well as disassemble-able. I decided to forego that this time. 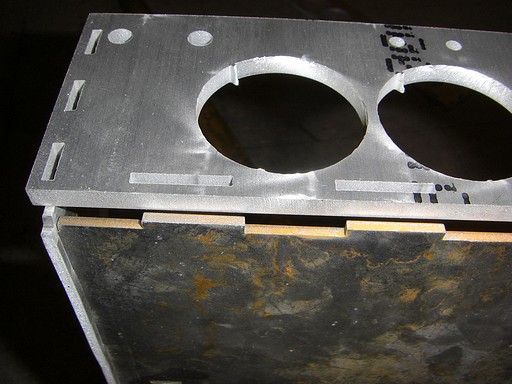 Uh oh. This is the result when I forget to pay attention to where I reference my mirror planes from.  The slots are offset by about 1/4″. 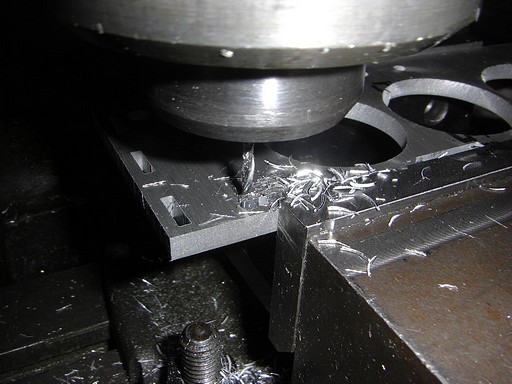 1/8″ carbide endmill to the rescue!

Maybe a year and a half ago, this would have been a serious project-delaying fuckup, since I’d have no way to move the slot over except by file and patience.

Actually, more than a year and a half ago, I couldn’t even imagine having waterjet-cut parts.

Or machined ones on-demand, for that matter. Ah, the joy of bot-poverty. 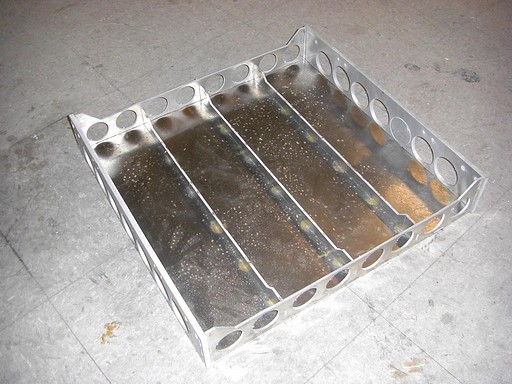 Whole thing squished together. All the tabs and slots are compression & interference fitted, which means this whole thing is pretty solid. Optimally I would have screws retaining the slats, since this kind of thin compression fit (a swage) is sort of weak against high vibrational loads.

We’ll see where it goes.

Also, I lied when I said that I committed the design to aluminum – the bottom plate is actually steel, since I was unable to locate a contiguous piece of aluminum plate of that size. 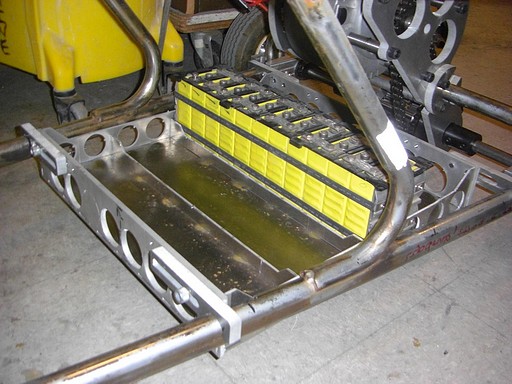 An initial test mounting was then in order. Here’s one battery pack sitting in its compartment, and the whole assembly dropped into the shopping cart bottom frame using the half-inch thick mounting ears. 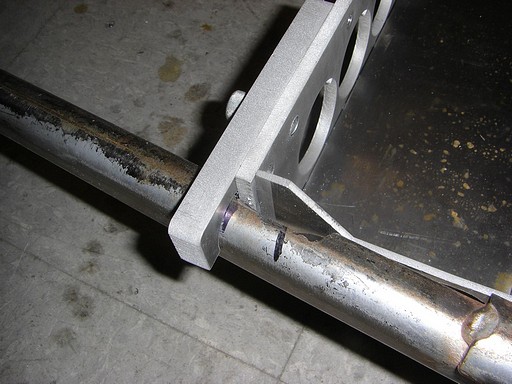 Unfortunately, even the most precise eyeballing can be erroneous at times. I had no coordinate-measuring device large enough to cover the bottom of the cart and the batteries, so I had to eyeball dimensions with a tape measure. This worked well enough, but I was off by maybe a quarter inch in width.

Problem is, with the frame having a total front-to-rear taper of 10 degrees, even a quarter inch of error is quite a substantial in terms of longitudinal placement – and by that I mean about an inch and a half difference.  I had to cut out a small portion of the tube frame to position the basket where I had originally intended.

This does not substantially affect the structural integrity of the cart frame much, since the tubing is (pretty fuckin’) thick-walled. 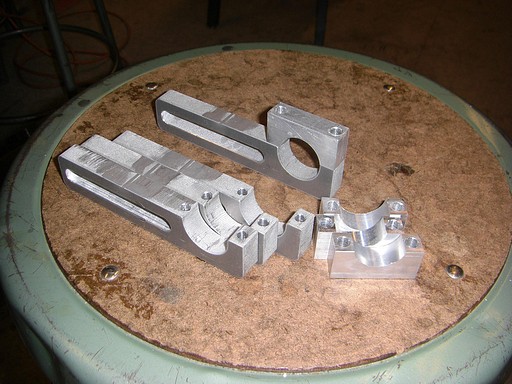 I’m not seriously going to just hang all the batteries from a hook, am I? No, that’s too daring even for me. Instead, the mounting ears have corresponding bottom halves that clamp around the frame tubing. I was not able to account for the longitudinal taper when cutting these, but figured it shoud be insignificant enough over 1/2″ to plug my ears and go LALALALALALA.

Notice the small discontinuity in the middle of the mounting ears. This is the result of me sanding down a “tab” I added to the cutting path. Small parts on a waterjet tend to either 1) fall into the tank, never to be found again, or 2) float up and get caught between the stock and the cutting head, which then 3) converts some of the mass of your checkbook to a “crunch” sound. None of those options are particularly appealing, so the best way around it is to add a “tab” – a small cut discontinuity such that the part stays in the stock, but you can break off easily. 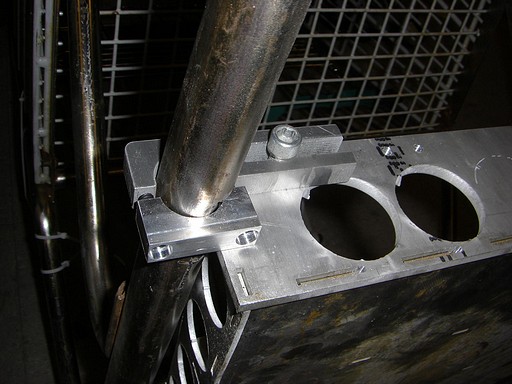 Here is one, semi-tightened. Notice that I also cut off part of the mounting ear past the cap screws. It covered up part of the two smaller holes that I was going to use to mount the +4 Plate of Battery Pack Retainment, because the placement error caused the mounting ears (which have that single slot for adjustable placement) to become seated too far inwards. 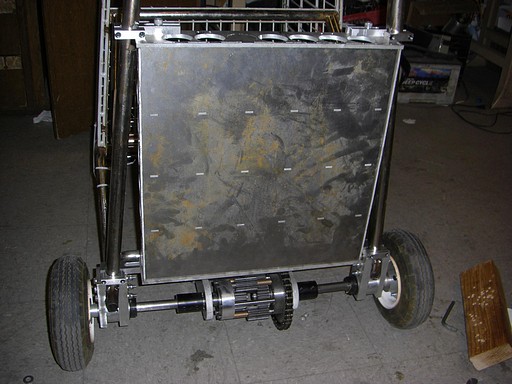 The belly of the beast, with all four corners clamped. 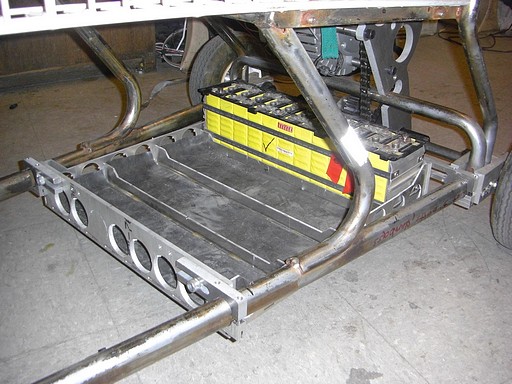 I discovered a roll of 1/8″ neoprene rubber int he back room. How convenient – it’s the perfect thickness to cushion and insulate the battery packs in their compartments.

I sectioned the roll and cut the chunk into small strips to line the compartments. 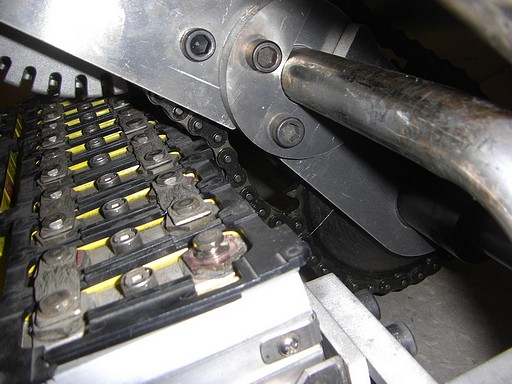 Hmm, looks like I need a chain tensioner after all. It will only be worse when the Plate of Battery Pack Retainment is added. 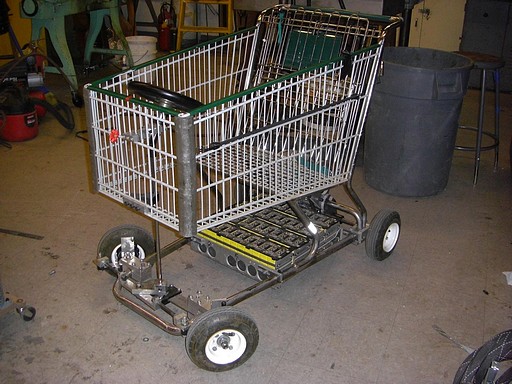 All four battery packs in place. Getting them into their compartments was a bit of a challenge, since I could not just drop them in from overhead or load from below. They had to be inserted carefully from the side, which was a balancing act for me.

LOLrioKart is now too heavy for me to heave around – so if I feel the need to move it around, it has to roll. I estimate the total weight at around 175 to 180 pounds at the moment.

Let me say right now that parallel-parking a shopping cart in a confined space like MITERS is quite a unique experience. 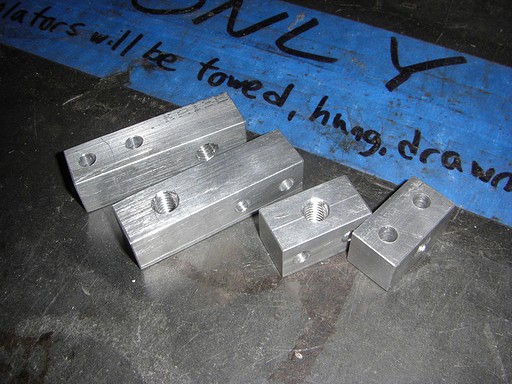 The rear ones are longer and offset because I found out that the original retainment plate design interfered with the motor mount, so I was forced to widen it. 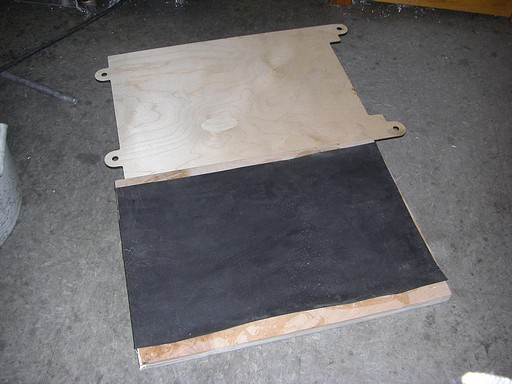 The new plate with wider-spaced ears and motor cutout.

So, here’s the plan. This plate will be pressing directly over the batteries, so it’s not like I have the ability to simply drive a screw through. That would be bad – instead, I am making the plate (currently 1/4″ plywood) thicker by adding a buffer layer of 5/8″ plywood, and a layer of 1/8″ neoprene above that. This would allow the use of modestly-sized wood screws to mount components without having the screw tips stick out underneath. The added thickness would add stiffness to the whole assembly.

The neoprene is rubber-cemented to the thick plywood, which is in turn wood-glued to the thin plywood.

I threw the entire thing under about 150 pounds of cast iron milling accessories, parked over the hotspot in the room (MITERS is situated over the N52 *boiler room*, and so there are spots on the floor that are always warm) to let the glues properly adhere.

In the next episode, I find out if my glue has set or not, and continue working on mounting!The plan is to get LOLrioKart rudimentarily running on the full electrical system – probably with a “GO” option and no “STOP” for now. Then work will shift to decorations, improvements, and..uh, braking.

Spring break is appropaching fast, then after that, Campus Preview Weekend. How many pre-frosh can I send to the hospital?