So this project has pretty much moved past the “it works” stage onto the “it’s useful” stage. I think that might make it my first ever constructive build project… as opposed to, you know, destructive. Or just absurd.

Over the past week, I’ve been riding the scooter around to get to class and run errands. It attracts a fair share of stares and questions, since nobody really expects to see a Razor scooter cruising at 10mph. Yes, I mounted the real e-bike throttle onto the handlebars, so it’s actually controllable. No, I have not went back and fixed that terrifically beautiful hack of a signal interface.

I have also been pretty good at “path look-ahead” to avoid potentially lethal potholes, but have yet to attempt a flying leap over the railroad tracks.

The range from a full change has been confirmed to be over 3.5 miles. This is quite in line with the ~4 mile calculation, and seems to include all of the inefficiencies that I did not include in the approximation (rolling resistance, terrain variation, wind resistance, etc). This is perfect. Why? Because it lets me make several cross-campus trips per day – e.g. to get to class and back, to get food, and to get to MITERS and bumble for hours on end. Here’s an example. 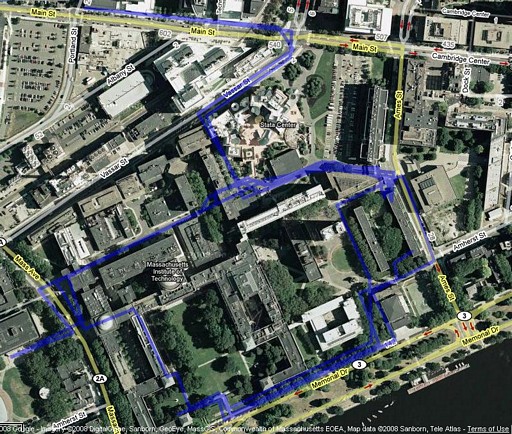 Yeah, all the blue lines are on top of eachother. This consists of the following trips from today:

That about covers my needs, really. 3.5 miles and back is also enough to make it to area hardware stores, which is of course a priority.

However, I have also been constantly maintaining the motor to keep it running. There’s nothing electrically wrong with it, but the design of the motor and wheel interface is that

1) it tends to force the motor apart, since the inside of the wheel has a chamfer on both sides and I have a matching outward chamfer on the motor endcaps, and

2) the wheel itself tries to torque the endcap tie screws out. How the hell does that happen? I had to cut indents into the tire’s plastic rim to pass those tie screws. They are circular in profile, and my guess is that with every compression cycle of the tire as it rolls on the ground, the indent sort of cams up against the screw and torques out a bit.What then happens is the screw sticks out far enough to bang against the aluminum frame, making a very audible click that tells me to stop immediately and ride unpowered the rest of the way.

This phenomenon has even defeated red Loctite.

I’m working on a design revision of the outer can that doesn’t rely on those screws to keep everything together. Either they will be routed internally, or the can itself will have some other method of fastening things while still allowing the tire to be changed. For now, the stator won’t change, since I can’t find another giant copier to rip another stator out of.

Oh, and I have also let all the Li cells go horribly out of balance. I haven’t made a charge plug for the DB9Â  charge/balance port – rather I have just been attaching alligator clips from my charger to wire leads shoved into the main + and – pins. Safe, eh?But now I have discovered that the cells have up to a quarter volt disparity, which is too much to let the whole pack charge at once. I’ll get around to making the balancer plug and cycling the cells appropriately.

The bottom line is that IT WORKS and IT’S AWESOME.