Update:Test video! Now it officially exists. Low speed only for now, since I b0rked the controller and stuck it in Sissy Modeâ„¢

After eight months of development, five of which were spent sitting on a shelf at MITERS, Snuffles Reloaded finally moved under its own power. And boy did it move… I have already managed to nearly faceplant once on it.

With the project having entered a state of semi-functionality, and with it standing a decent chance of becoming something worthwhile, I’d like to move onto a less whimsical name. While “Snuffles” was cute, it just doesn’t have that aura of coolness.

Okay, so “RazEr” doesn’t either, and the coolness of a Razor scooter maxed out some time in the year 2000. But see what I did there? It’s an E! Instead of an o! For “ELECTRIC”! And it’s a Razor scooter! Get it?? INNOVATION! 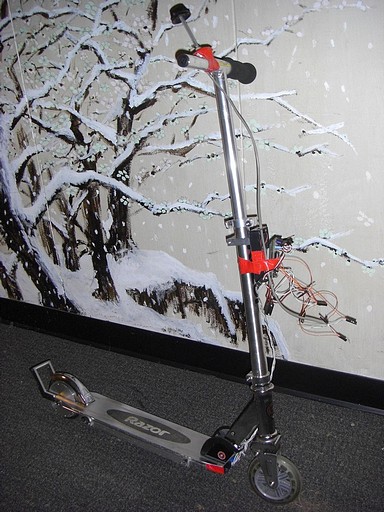 Yes, that IS a small, amorphous blob of wire and circuitry duct-taped to the steering column with a knob on an equally duct-taped stick acting as the speed governor!

No, it’s not spring returned. It’s cruise control for cool. Without caps-lock, and potentially more blood.

I finally mustered up the effort to pull it off the shelf and hook up the last four wires remaining on the thing which had kept it from moving for the past few months. With the help of some friends, we got everything bunched together as a test rig – then decided to call it good and wrapped everything in tape. And good it was. This time, functional cameras are immediately accessible, so expect some “action shots” when the sun comes up.

So why is it “99%” done? Well…. right now, it will probably get me arrested if I take it to the airport (then again, when you’re an MIT student, anything will). Obviously there needs to be some wire cleaning and rerouting. I don’t have a correctly sized box to house the onboard voltage regulator and R/C signal interface yet. I have a proper E-bike throttle that fits over the handlebars. I also need to make a charge-balance plug for the battery pack.

However, it is at least mechanically sound, and I was able to ride it back from MITERS. Therefore, I know the range is at least 3000 feet minus one railroad crossing. 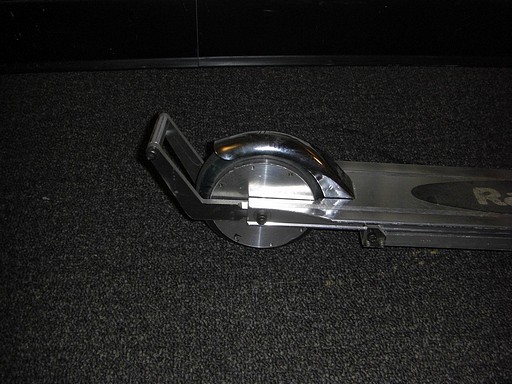 The business end. The relevant power transmission implement – there is only 1 – is housed completely in the rear wheel. It is a 80mm diameter custom-built 3-phase brushless DC motor, conveniently hidden within the confines of a 125mm scooter wheel. Maximum power on it is probably about 1000 watts. I have yet to properly meter it.

Even with no torque advantage (as a direct drive motor), the acceleration is pretty absurd. It’s not quite the neck-snapping and rider-launching takeoff of Snuffles 1, but I do need to hang on pretty hard. It is, however, a controllable launch, and will be even more so when a proper spring-loaded thumb throttle is installed (you know, so I don’t have to hang on with one hand and one leg while twiddling a knob on a stick with the other hand) 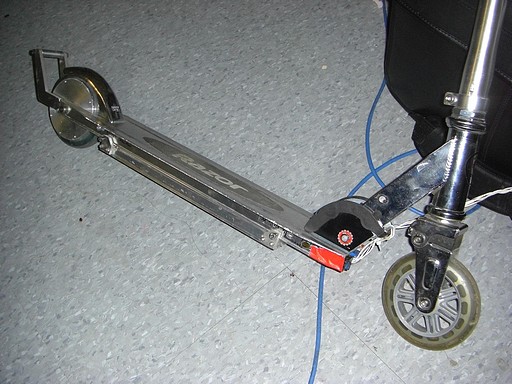 The whole vehicle is very low profile. Yes, I managed to drop the height of a Razor scooter – with an add-on battery pack. You think pebbles were bad before…

This is the “larger” flavor from Razor, which has 125mm wheels. With the belly pack, I still have about 1.5 inches of clearance. Not going to be bounding over any curbs or potholes, but it’s enough to get around on bike lanes and sidewalks.

There are four 4.2AH lithium polymer flat cells inside, and four outside. They are run in series for 29.6 volts nominal. The packs are rated for 20C discharge (80 amps) and can burst 30C, so I have plenty of reserve battery power. As for capacity, calculation showed that my optimal range at constant power on flat, frictionless ground in a universe with a constant gravitational field at a constant temperature in air with zero viscosity and me approximated as a point mass… is about 4 miles, no entropy generated. Realistically I expect far less, and need to do a real rangecheck some time soon. Anything above 2 miles is really enough to putz me around campus and into town and back.

With an extension of the belly box, and some custom control electronics, I could conceivably hide all the control stuff inside the tube frame, and only have a throttle cable coming out. 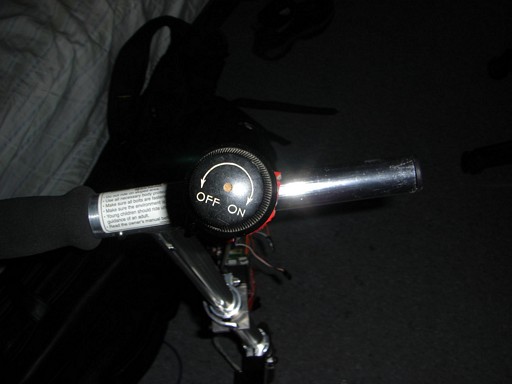 Yeah… that’s about how it is. 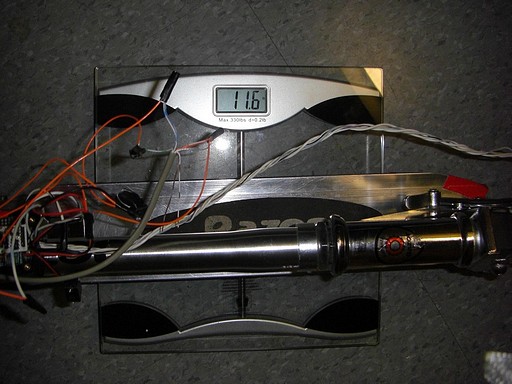 And it weighs this much. With better mounting facilities, it should weigh around 12 pounds. That’s a hair under 6 kilograms for you people in metricworld.

Anyways, work will now continue on dressing up the control system. I’ve officially moved past the “90% Zone of Project-Related Self-Loathing” which occurs with everything I build – I would furiously build it to 90% of the way, then just get sick of it and forget about it for a while. Now that I know it works, I should be a little motivated to push it through.

(read: expect another update in 8 months)

I have kept a detailed build log of this project and its predecessor on this site.