Can I add more Unicode symbols to the name? Yes.

It’s that time of year again – time to prep for the winter competition season. The event of interest is Motorama 2009, only 2.25 months away (again…). Last year, I prepped Test Bot 4.5MCE-SP1-WTF-BBQ for the event, which sort of ended in semi-epic fail. A few months ago, I built Überclocker for Dragon*Con 2008, which ended in epic fail.

The mission this time is to bring Überclocker for the 30lb Sportsman Class. The 30SC division is a recently created weight class which attempts to shift the focus of lolbot combat back to innovative weaponry and designs. I originally designed ÜC for this class.

But of course the bot can’t just go in its current form, since nothing really works. Therefore, over the past few weeks, I have began to refresh the design to address the shortcomings of ÜC1, which pretty much meant starting from a new file. 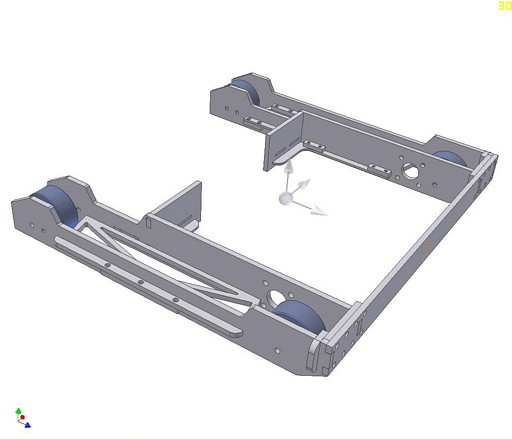 Let’s begin. A few hours of diddling got me the basic shape of the frame, which incidentally is sort of like the frame now. The big difference is the method of construction. Since proving to myself that I can build a bot in two weeks, I’m going to try to “Chinese Puzzle” the frame like I did on NK, with a variety of tabs, slots, nutstrips, and other elements cut into quarter and eighth inch aluminum plate to be magically assembled with the help of some retaining screws.

With prudent design, I should have to do minimal machining (e.g. tapping, enlargening, or boring out holes) on the superstructure of the bot. 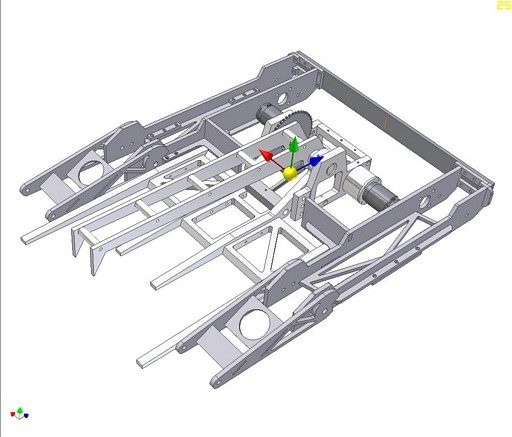 A few more hours of diddling, and the basic shape of the bot is defined. The extended legs will return in a different form. The old fr0k assembly is in place to gauge the dimensions of the bot, and will actually be replaced with a whole new assembly. 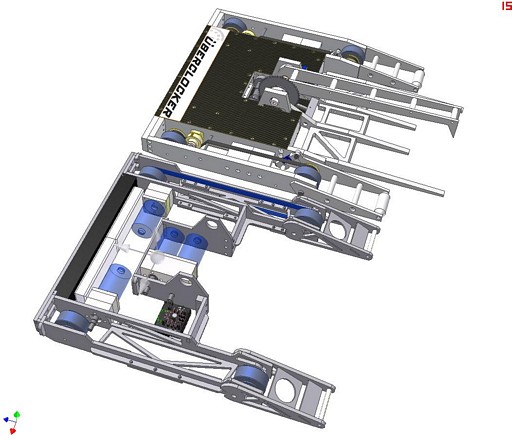 Comparing side-by-side with the current bot.

This version will be 2″ narrower (since I will not have a problem with lateral stability) and actually a quarter inch thicker. Did I just make a bot *TALLER*? Yes, it is so I can fit the electronics in more efficiently. I should be able to double-deck the Victor 883 controllers inside. Victors, while extremely reliable and properly rated, are not exactly compact. By not requiring as much electronic floor space, I can shorten the middle of the bot and move the center of gravity further back.

The wheelbase is also 2″ longer than the current build, and the fork drive assembly (the single heaviest part in the bot) is further back. Ultimately, the goal of all this is to move the center of gravity as far away from the front as possible, in an attempt at mitigating faceplants. 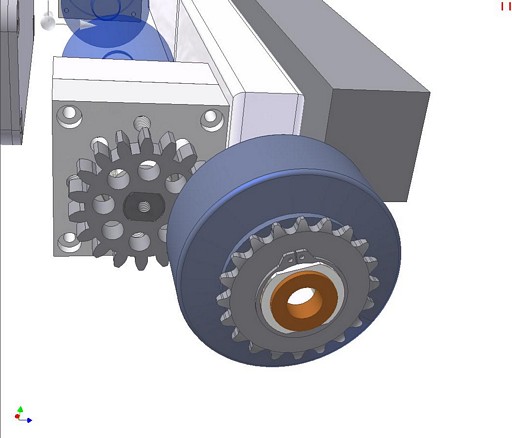 Let’s move on to the drivetrain. A major change from the current build will be the ditching of timing belts in favor of #25 chain. While there’s fundamentally nothing wrong with belts (TB and NK both use belt drive), I found that a set of timing belts and pulleys was just too wide for the new rear drive solution.

What is it? Direct gearing! The drive motors will be 1:1 geared to the rear wheels. This solves the problem of getting power to at least one wheel on each side reliably. On TB, the drive motor cranks the rear wheel directly, but doing so in Ãœberclocker would require much larger wheels than I feel like using.

These gears will be 12 pitch and waterjet cut from 5/16″ steel. I’ve cut gears on the WJ before (hit refresh a few times to spot the site banner featuring some of that work), and figured this was a better (read:cheaper) solution to getting a handful of gears than buying the gears (which do not come in the face width and with the hub features I need) and machining them down. All of them.

Furthermore, cutting my own gears allows the use of custom bore features – like the double-D shape seen on the motor shaft. This allows me to cut a flat on the motor shaft and have the gear sit at a known location while transmitting torque. It will be retained by a screw and washer.

The sprocket on the other side of the wheel will also be a custom cut piece (thank goodness for geometry generators) with a large DD to match the one machined on the hub. A big retaining ring keeps everything in place. This allows the transmission of torque from wheel to sprocket with mininal width (just wide enough to pass a chain).

The whole assembly is 2″ wide. 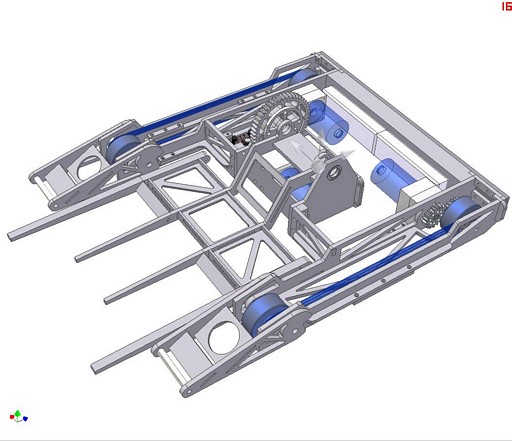 Oh hey, it’s a new fork. This one is much lighter, weight and build, than the current. Sections of threaded rod with nuts will bind all the plates and whatnot together, hopefully forming a stiff structure. Only the outer forks, which will be taking the first hits, are half inch metal, with the inner forks 1/4″ thick.

Notice the little trusses and holes starting to appear in the frame. This is my attempts at keeping weight down while maintaining some semblance of structural integrity.

Also, the fr0kdrive assembly has been compactified. I realized that with some tweaking of the geometry, I could stick the lift motors right under the pivot and drive the fork directly with gears…. 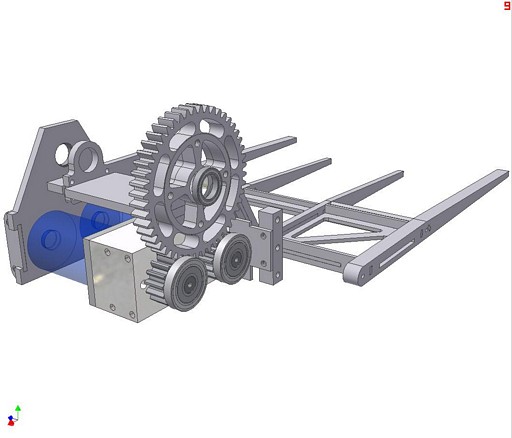 And gears there will be. The two lift motors (the Ã¼ber-ghettofrakenb0xen) have been melded together into one case as the Integrated Dual Frakenb0xen. Each gearbox is 216:1.

On the other side is a 3.2:1 arrangement of 12 pitch spur gears. The pinions are stock commercial parts from McMaster-Carr, and the upper assembly will be waterjet-cut. Pinions ride in their own enormous ball bearings, and so does the entire fork assembly. Overall reduction from motor to fork is 691:1. 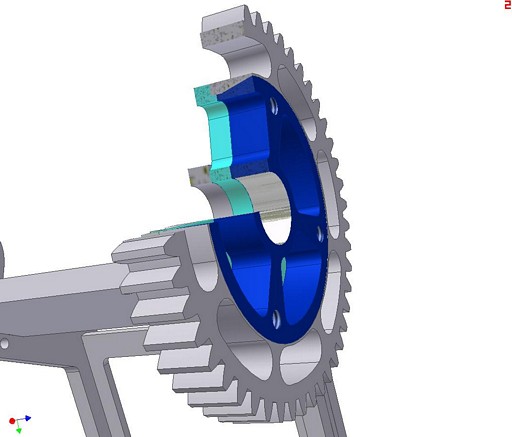 Such absurd gearing can easily destroy itself if there’s no limit on the torque produced by the motors. Ãœberclocker currently uses shaft collars clamping on a split shaft to limit the gearbox output torque. This works well, but there’s no intermediate shaft this time.

I have decided to implement a cone clutch assembly on the drive gear. The blue and cyan parts are rigidly attached to the fork structure, with the blue part movable axially with adjustment screws. It is tapered externally and mates with an internal taper in the gear. The gear will slip at different torque levels depending on how hard I crank the screws. Or so I hope.

This will be a venture into precision secondary operations on a waterjet-cut part. Up until now I’ve been doing pretty mundane stuff to my WJ’d parts, like threading, enlargening holes, and the occasional boring. However, this would require some pretty precise lathework on the bore, and keeping the less-than-consistent edge of the WJ’d part in line will be interesting.

The gear, blue cone, and cyan mount will all be roughly profiled on the waterjet (straight sides). Then they will be externally and internally machined as needed. 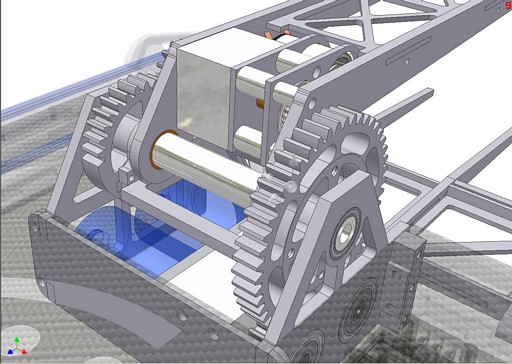 AlsoÂ  being revamped is the clamp arm drive. The bot currently uses a really dumb leadscrew actuator mounted to a weak-ass insect-class motor. For some reason I expected this to stay together in battle.

It didn’t, so I’m upgrading. The new actuator is a 540(or 550) drill motor run through its own 150:1 gearing. I figured that as long as I was making a weird gear for the main fork drive, I’d make one for the clamp drive. The drill motor is mounted next to the gearbox, and power makes a U-turn from the motor into it, through a 1.75:1 belt drive (not really visible). This feeds into a drill gearbox assembly (36:1) and outputs onto another custom WJ’d spur gear set (2.5:1).Â  The large output gear is actually part of the main fork structure, so the clamp arm can move relatively to the arm, carring the actuator with it.

This gearset is clutched at the drill gearbox ring gear (like a normal cordless drill), mostly to prevent it from exploding if another bot tries to force its way out.

This is the number one “weird complicated mechanism” that might get revised before I get there in the actual build process.

And so the culmination of everything is… 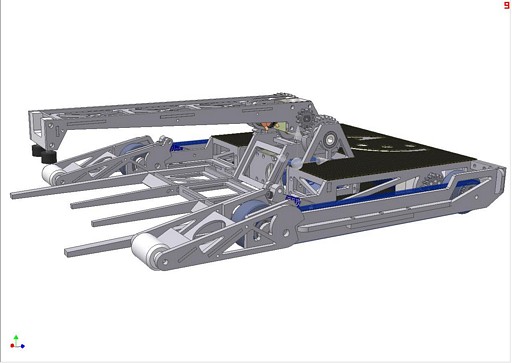 The upper grabber structure is assembled the same way as the fork – truss plates and main side beams bound together with threaded rod. I actually planned ahead and am implementing squishy bumper feet things for industrial furniture (from McMaster) into the tips. This should make bots less likely to just slip out.

Top and bottom plate attachment is not yet designed, nor are internal electronics mounting implements. Now that I have discovered that McM sells carbon fiber panels in normal thicknesses and sizes, I’m going to try and CF the whole bot.

If all goes according to plan, I’ll have the large Ãœberclocker logo on top backed in white plastic with an EL panel, so it glows with a sinister light. Or something.

So this would be Update #1, I suppose, for the new bot. The design is not yet final, and things will probably change some (like that clamp drive assembly). I do need to get stuff cut out soon, though, if I want to make Moto. I need to factor in the fact that there will be a roughly 1 month gap between now and then in which I will not have 24/7 access to some form of machine tool…