In nuclear physics, criticality is when a chain reaction becomes self-sustaining. In MITERS physics, criticality is when your project can actually support its own weight without being propped up by 2x4s. It’s only taken me six months to put 4 wheels back on the kart (which can now function as a shopping cart again!). The driveline mechanics and steering linkage are still not complete, but at the very least, it can be rolled around at will to clear space in the lab.Â  So, naturally, it’s picture update time. 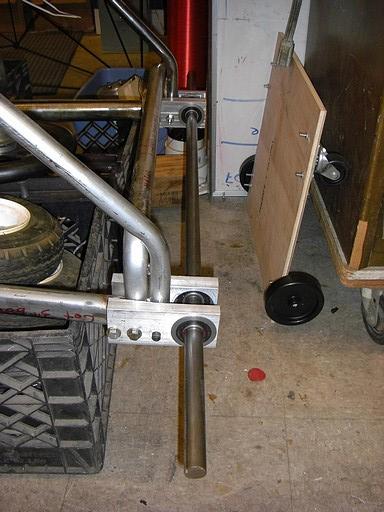 After making a mirrored set of bearing blocks, it was time to test the axle alignment. Either my parts aren’t square with respect to the cart frame, or the cart frame is just not square at all, but it takes a bit of malletwork to push the axle through. I have to keep the retaining bolts pretty loose during axle service also.

I thought of a few workarounds like remaking the double blocks from one single block, or using self-aligning mounted bearings, but put it off to work on the rest of the parts. 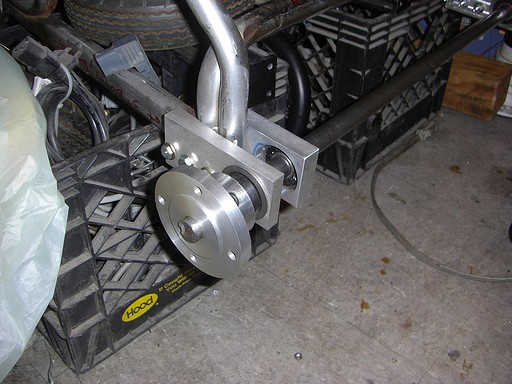 Temporarily mounting a drive hub to test fits and clearances. As expected, I’d need a shaft collar on the outside of the bearings to keep the tires away from the mounting bolts in addition to the collars on the inside. I may end up making this one large shaft-block-spacer assembly to reduce partcount. 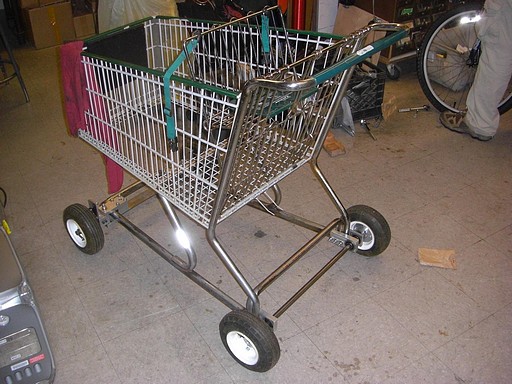 With the rear tires bolted on, it was time to drop the thing off the milk crates which have acted as a work stand. Here’s the first “on-the ground” test. Not much a test, since it had no steering linkage or drive components, but it was a good chance to test the rigidity of the entire system by jumping in the basket and rocking around. Verdict: I approve. 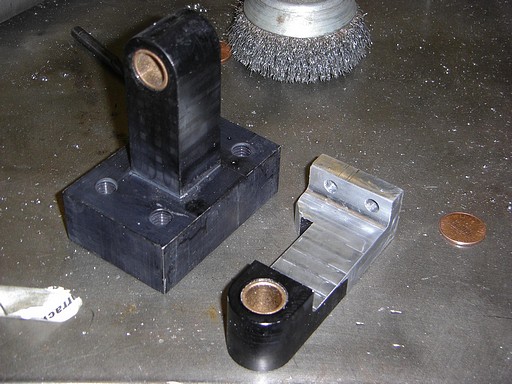 Let’s get to work on the steering linkages. Out of the same mysterious machine that supplied my brake-o-hub original material come these trunion-like things. Each one is a one-piece machined aluminum block with a bronze bushing in it. How convenient – they seem like just the thing to turn into steering arms.

The left part is the original part, and the right the finished steering arm. I had to cut down much of the material to get to that stage, but it was the most compatible with the months-old steering knuckle design, and also an excuse to make the space smell like Tap Magic. 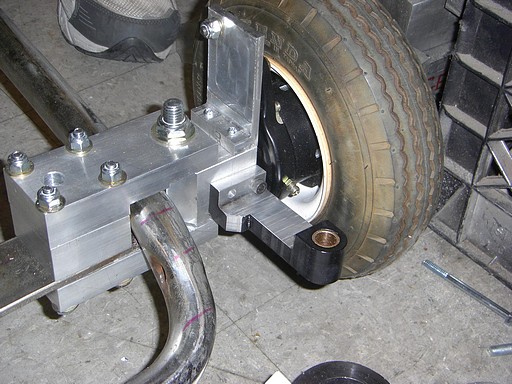 Test mounting the finished part. The chamfer allows a farther range of motion in that direction. Normally, the edges of the knuckle blocks themselves act as the hard travel limiters.

The combination of hard machined lines and angles give the front end a rather distinct look that I rather like. 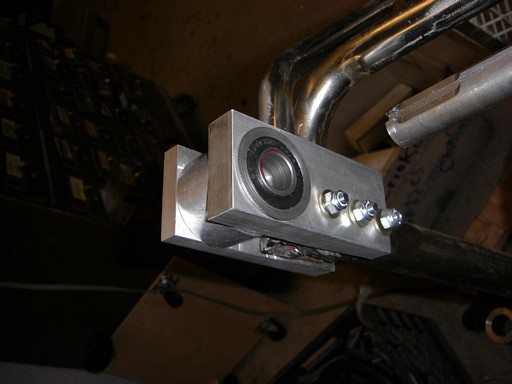 So remember how the bearing blocks weren’t exactly square with the frame? They actually not square with themselves either. Small variations in how the steel tubing cart frame was welded made aligning the bearings to pass the shaft through extremely difficult. Â  To alleviate this, I made an inter-block spacer with pilot circles that snugly fit the bearing bores. At the very least, this forces the bearings to be square with eachother. The two sides may still be out of square, but retaining bolt holes can be fiddled with.

After properly spacing out both sides, it was much easier to remove and install the driveshaft. Speaking of which, I milled double flats on the ends to give the hub screws something to bite onto. The shaft is also internally threaded on both ends, so I can at least have something physical interlock (like a bolt with washer) between set screws and certain death. 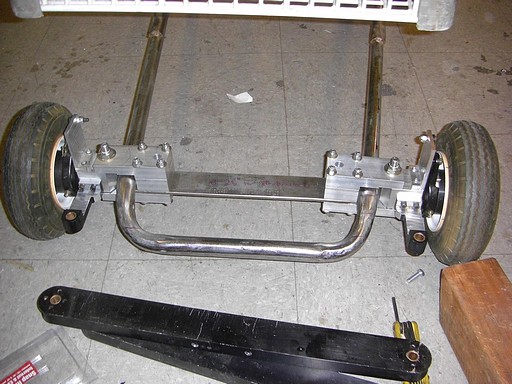 With both linkage arms made, it was time to try and link them together to check out the steering geometry. The spirit of the mysterious machine supplied these dual-bushing aluminum spars which, by some chance alignment of Cybertron and Earth, was the exact length to provide perfect straight-ahead wheel alignment (Any toe angle is too small for me to notice). 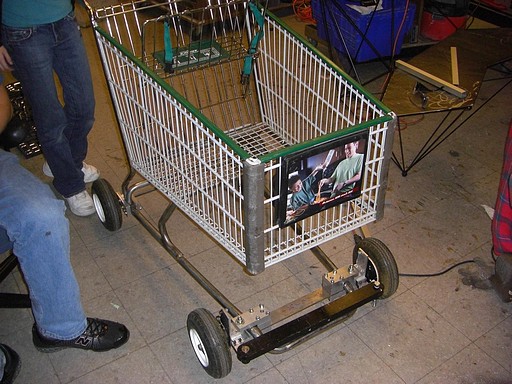 And so the first inaugural test run of the kart was completed, with three people involved : One to ride, one to push, and one to flick the steering. 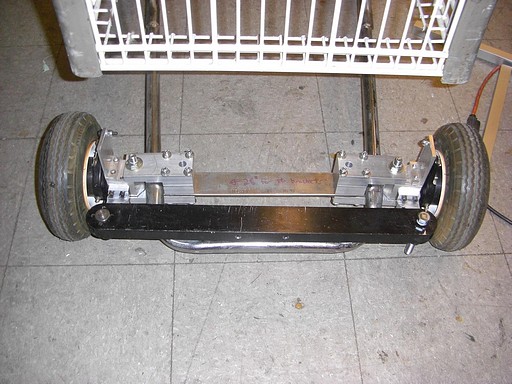 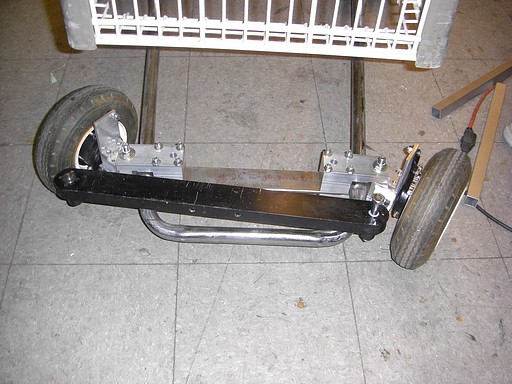 ….and at maximum departure from center, turning right. Notice the difference in angle of the wheels – this is an attempted implementation of the Ackermann steering geometry, which is what modern car-type steering is derived from. That’s the reason I took the extra step to make the steering arms offset to one side. 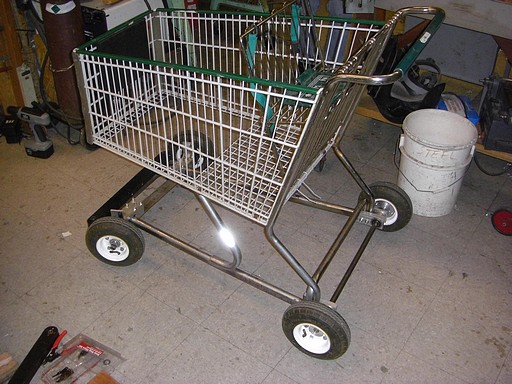 So that’s all for now. Even though the big aluminum link was fun, it will probably be replaced with some big tie rods to allow for fine adjustment. I have not planned out how to actually attach the steering wheel to this linkage yet, nor have I designed the motor mounts or rear powertrain. Or anything for that matter – the entire kart build so far has been design-and-build on-the-fly. I don’t know what parts I’m making until 5 minutes before I actually make them.

The primary goal is to get the steering and front brake system working, since that allows the kart to be used as a rolling chassis for any number of different propulsion methods.