About 2 months ago exactly, I commissioned a Replicator for our research group because I at that point was clearly never going to get anywhere with my plastic-pooping EZ-Bake oven. Several weeks (about 8, actually) passed, a few seedlings did some burnouts in a parking garage, I allegedly invented Mario Kart (again), and a bunch of other stuff happened and I kind of forgot about it.

Then this showed up. 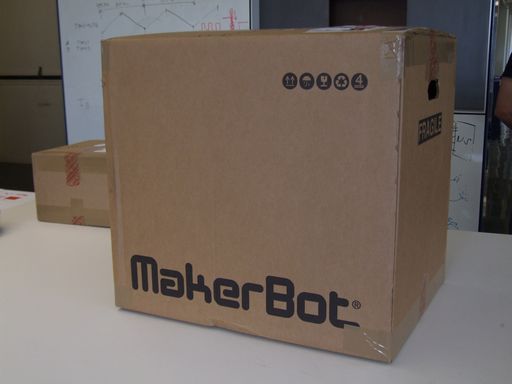 Oh dear. Well, I’d gotten cryptic emails a while back regarding awaiting some kind of special shipment…

Alright, it’s time for another episode of BEYOND UNBOXI…well, I guess i’m only unboxing it right now, so nevermind. 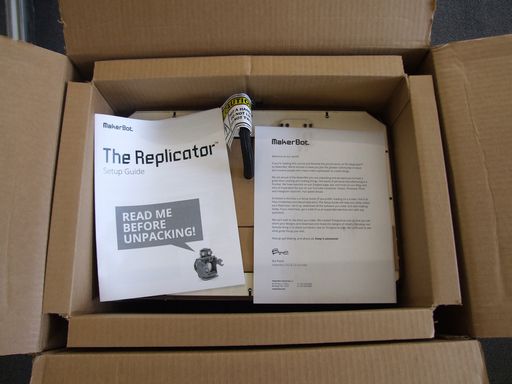 With the top layer of packing material removed, I SEE THE THING. Glossy printed setup manual and cut-to-shape cardboard packing structure? Makerbot is getting so legit that it’s still funny because it’s awesome. 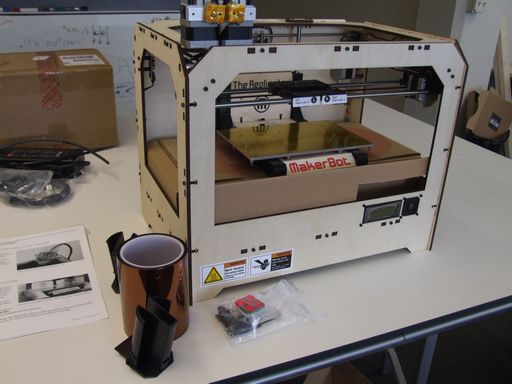 THE THING. GUYS. IT’S THE THING.

The whole process of unpacking it speaks to how much effort was put into packing it in the first place – there’s alot of well fitting custom packing material. I guess if you’re shipping a completed and tested machine there’s no other choice. The platform is all pre-coated with Kapton and there’s a free roll of it included.

I presume the little calibration dongle was made using the machine itself before shipment. 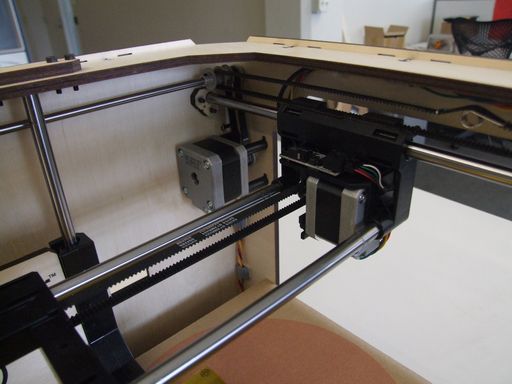 The level of engineering in this thing is leaps and bounds over the Cupcake and even the Thing-o-Matic, as far as I can tell by eye (and by jiggling axes). Injection molded brackets and bearing holders! It looks like the focus has shifted way from ‘kitting’ to integrated, tested machine – which, IMO, is probably better. As my past adventures in designing for easy lasering and waterjetting, and DPRChibikart’s build process is showing again, there’s alot of optimization potential and performance you sacrifice by restricting your build to a certain process or making it so generalizable that anyone can put it together. For silly vehicles, my view is that alot of these compromises are acceptable because there’s invariably many solutions to the same problem; I don’t think the same is true for machine design, especially machines relying on precision and repeatability.

OH, DID I MENTION IT’S NOW A GANTRY HEAD

One of the things I didn’t like about MaB from the start was the fact that I hurried through the design and just kind of copied and pasted what everyone else had going on at the time. The moving bed design really sucks because the axes have significant inertia and you accelerate the workpiece itself, which is bad if it’s remotely heavy. 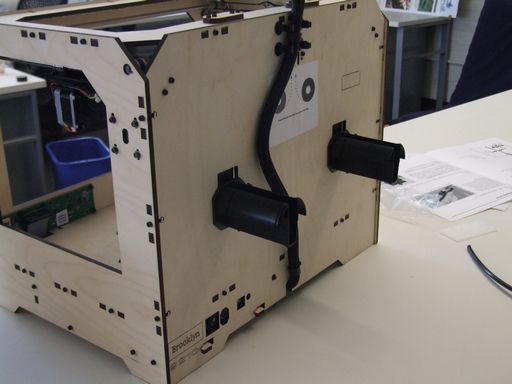 The little details are great, like these integrated spool holders and all the cable snaps. 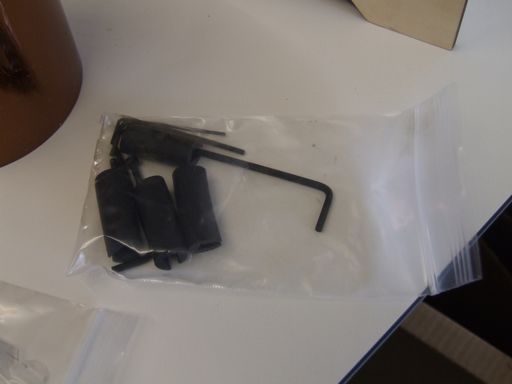 It even comes with allen wrenches. Guys, this is just like IKEA. 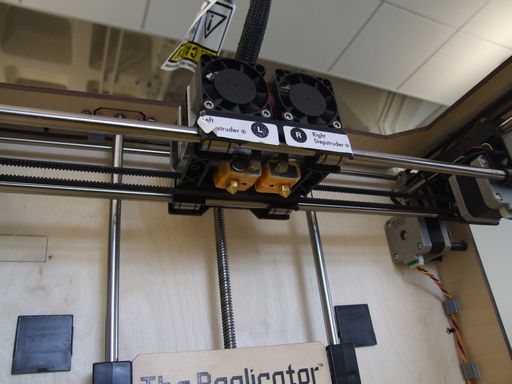 With two screws, the dual head extruder pops on. We went ahead and sprung for the twin head (can you say profit margin?) in case fully integrated support material becomes a thing in the near future, which I am positive it will. Right now, you still have to “merge” two separate STL geometry files within the software (ReplicatorG) to use the dual extrusion feature. More legwork on your end, but legitimate dual material is possible right now, such as ABS + PLA or similar.

Because I think we’re mostly going to be making machine parts and robot dong(les) with it, I’m more interested in integrated streamlined support material deposition than the ability to print a blue and green world. That would make this thing roughly 90% of a Stratasys uPrint at 10% of the cost. 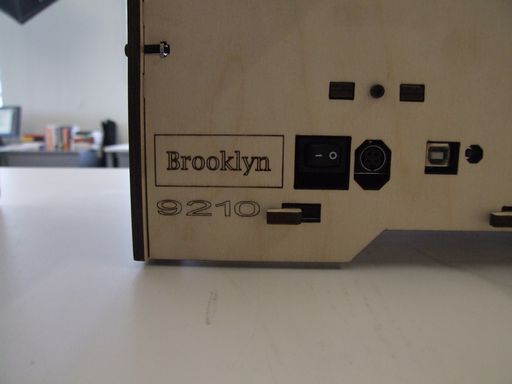 If Makerbot were steampunk, this would be a cast-iron or forged brass badge with THE REPLICATOR MAKERBOT INDUSTRIES BROOKLYN N.Y. U.S.A. in fat script or squared off block letters arranged in circular outline. Or if it was really hardcore, just straight across with no stylization whatsoever because your machine is too badass for cute logos.

Because old machine badges are awesome. 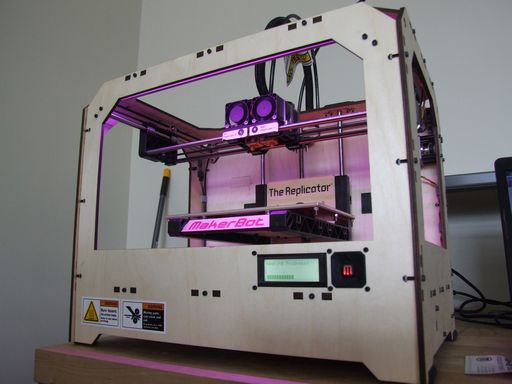 After setting it up and powering on, the machine has a first-startup script that tests the extruder and helps you level the build plate (which is fully retracted for shipping). It also changes colors as it heats up – the ‘underglow’ is blue for cold plate or extruder, gradually fading to red when it is fully heated.

Well, technically that’s the opposite of what a black-body radiator (“heat source”) would do, but just like conventional current vs. electrons, who’s gonna argue… 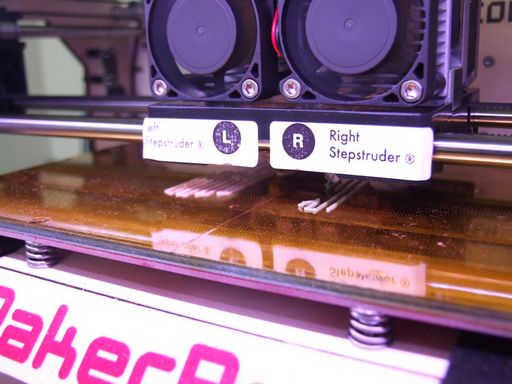 I tried one of the dual extruder files that were included on the SD card (whose slot I searched on all 5 sides of the machine which did not have the SD card slot) just to see if I did the levelling thing right. 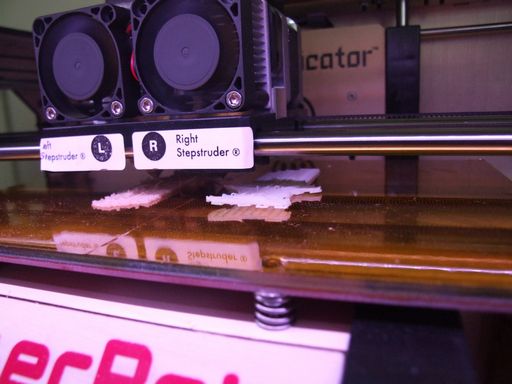 While I guess I did, the actual level that this sets seems to be too high. This file was the fish looking thing, and it didn’t end very well. Any other Replicator owners notice this? When printing the bottom most raft layer, I’m used to seeing the head mashing a thick track of plastic into the build plate – with the ‘one paper thickness’ first-run platform height, it seems to be nearly .5mm too high, and even the base layer sort of just squirts onto the surface but doesn’t get spread out at all.

I kept adjusting all of the leveling screws until the ABS trace was more like what I was expecting. This involved moving the plate up at least another full turn and a half, or something like .75mm if I estimated the screw pitch correctly – I was afraid that the nozzle was going to plant into the build surface, but it seems to have a preset altitude. 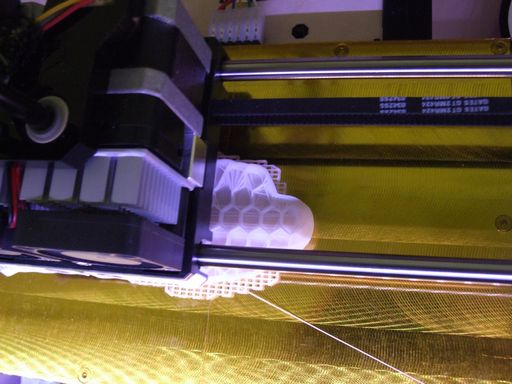 The RepG software is infinitely easier to use this time around. This is the first time I’ve used the “Print-o-Matic” feature in person, and I must say it makes the user experience more intuitive.

It looks like the default infill is scribbly hexagons.

I swore I would make no setting or hardware changes to the machine to appraise it for its out-of-box funcationality, but I couldn’t resist. The default full-fill setting extrudes using only one axis – either X or Y. I’ve historically favored the ’45 degree’ method which ensures both axes move simultaneously to draw a fill line, because it forces any axis inconsistencies to average out through vector addition – keeps things symmetric. Therefore, I changed the “infill direction” to 45 degrees instead of 90. It’s like printing X’s instead of +’s.

So that’s two things I’ve deviated from so far – platform trim height 0.75mm closer to nozzle after the levelling script has run, and infill direction to 45 degrees. Not bad yet… 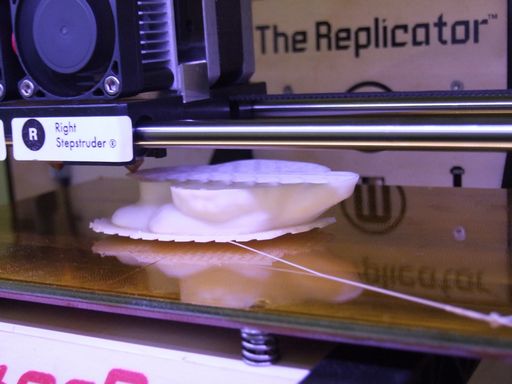 Alright, so let’s make that three.

I’m still not sold on the whole “hot kapton tape” surface, unfortunately. It’s included with the machine, it looks great, but I just couldn’t get it to stick well at all. I tried cranking the platform temperature to 110, then 115 celsius, but the results were not much different (two 6%-bunnies died for this cause). Maybe it’s just extra cold up in Boston or something  – MaB had never fared well during winter either, and the shop was about 55 degrees that day due to leaky windows and a friendly cold front. 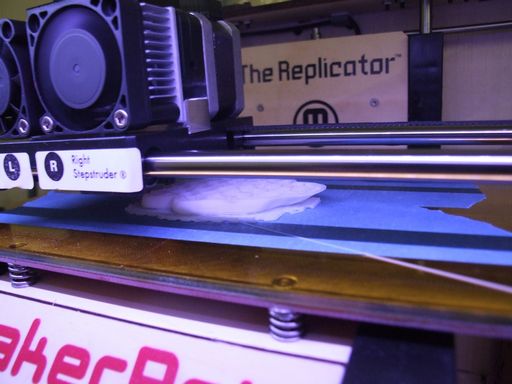 So I did the THIS IS HOW I DID IT IN MY DAY thing and dumped some blue tape onto it. Sorry Makerbot D:

Quantiatively speaking, I could get about 6mm of bunny out of the blue tape before signs of raft warping showed up, whereas the raw Kapton gave up after what seemed like only 4-5mm. I let two half-bunnies print to see at what point the prints fell off – the blue tape bunny detached around 60% whereas the raw Kapton bunny only made it to 45%. This was all during the chilly evening, so I’m sure ambient temperature played a role as well, but an equal role for both.

Yes, I watched this thing print bunny asses for about 4 hours. In the name of Science, I swear.

While I could have tried roughing up the Kapton with sandpaper, seemingly a common tactic, I’d have to do that every time the surface needed to be replaced. I’d much rather just rip off more blue tape. To me, anyway, it makes more sense that molten plastic would tend to stick better to a porous and micro-rough surface such as the painters’ tape. A Stratasys build tray is actaully very finely textured if you look up close.
In other words, I’m going to need alot more convincing before accepting hot Kapton – even though it seemingly works for alot of people, I suspect there’s things which go unreported to maintain the validity of the ‘community solution’. 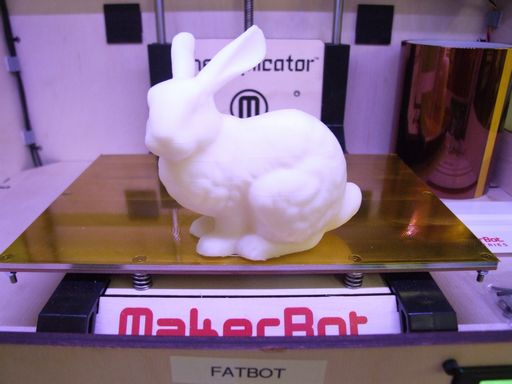 Alright, after the aforementioned minor finangling, the FIRST CALIBRATION BUNNY! The effects of the less than warm room (which is also pretty drafty) can be seen in some of the split layers. Extrusion settings for this run were bone stock, though, and the results are impressive. There was absolutely no tuning of extruder settings or making 10 calibration cubes to reach this stage.

To alleviate the breeze problem, I might consider walling off the sides and front (with a door in the front) like some people have. Breezes and incidental wind gusts are what do the most damage to these unshielded prints, and just the turbulence of you coming up to stare at it will generate a puff of cold air. I’m not inclined to try and turn it into an oven because some of the internal major structure is made of ABS plastic, and to stress-relieve ABS being held up by ABS will not end well.

It’s not my machine to hack, technically, but maybe if I plan it well and make it reversible I can make aluminum replacements for the ABS moldings and then heat the interior up to 50-60C. 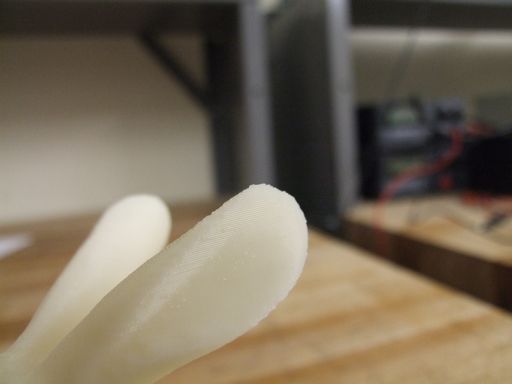 I’m going to harp a little more on the development of the direct-drive stepper motor controlled extruder and its associated control hardware/software from even a year and a half ago to now. This amount of detail on the tip of the ears is phenomenal, and done without support structures. This just about beats the uPrint machines we have already in terms of finish quality. That’s a ~2.5mm long single line at the very tip.

So to recap… I think this contraption is awesome. But I’m not so sure on some of the very fine details that I took note of immediately which novice buyers and users might miss on – such as the seemingly extra low build platform and the inconsistency of hot Kapton. Any machine can be made to work much better once nudged enough, and while I didn’t have to nudge it as much as MaB, I’m wondering how these tests would have ended up if anyone else in this lab space – who don’t necessarily follow the hobby 3D  printer scene – were the one unpacking and testing.

There is a Calibration Naked Lady printing right now, overnight, without supervision (just like the manual told me not to do). We’ll see how it is in the morning!

One thought on “We Interrupt This Regular Scheduled Update BECAUSE REPLICATOR”