Let’s return to a scooter which is not made of wood.

For the longest time, the only thing that’s prevented RazEr rEVolution from being an actual useful vehicle has been the rock-hard wheels I selected for some reason last year. Both were surplus finds and very cheap, and the rear wheel especially was selected at the time for its low tread profile. Being industrial casters, though, they were hard, a fact that I didn’t really think about being a possibility before I got them. The front wheel is 95A Durometer (pretty damn hard) and the rear wheel was 90D Durometer (might as well be plastic).

So basically every time I rode RazEr around, there was a loud rumbling sound on top of the earsplitting 4kHz PWM sound, and afterwards I could not feel my ankles. RazEr rides were limited to indoor, smooth environments. This isn’t to say I didn’t try riding it back and forth across campus a few times, but the numbness in my joints afterwards threatened early arthritis and I was constantly afraid of shaking apart the components inside the motor and destroying the melontroller. Ultimately, though, the vehicle prevailed over my willingness to ride it…until I accidentally detonated the controller in Singapore. With RazEr out of service anyway, I got a little more motivation to replace the wheels. The other portion of the motivation came from discovering how well Straight RazEr handled with the 5″ 65A durometer Colson Caster wheels (a staple of combat robotics in the past). Straight Razer rode very well as just a regular scooter, but it just had too much horsepower to safely handle day to day.

I never thought you could machine a Colson wheel all the way out to the tire, however. My impression of them was that the plastic ended very close to where the rubber began. Therefore, coring them out would not end well as the ring lost integrity while being machined. But while visiting the GT Invention Studio, I watched Colson wheels being machined for A Certain Other Hub Motor Scooter (no, not that one…. the other one). It was indeed possible -the Colsons had a plastic ribbing that the tire was molded over, so even the clamping pressure of a lathe chuck wasn’t enough to deform them for light and moderate cutting passes.

Well, could have had me fooled. It was time to change tires. 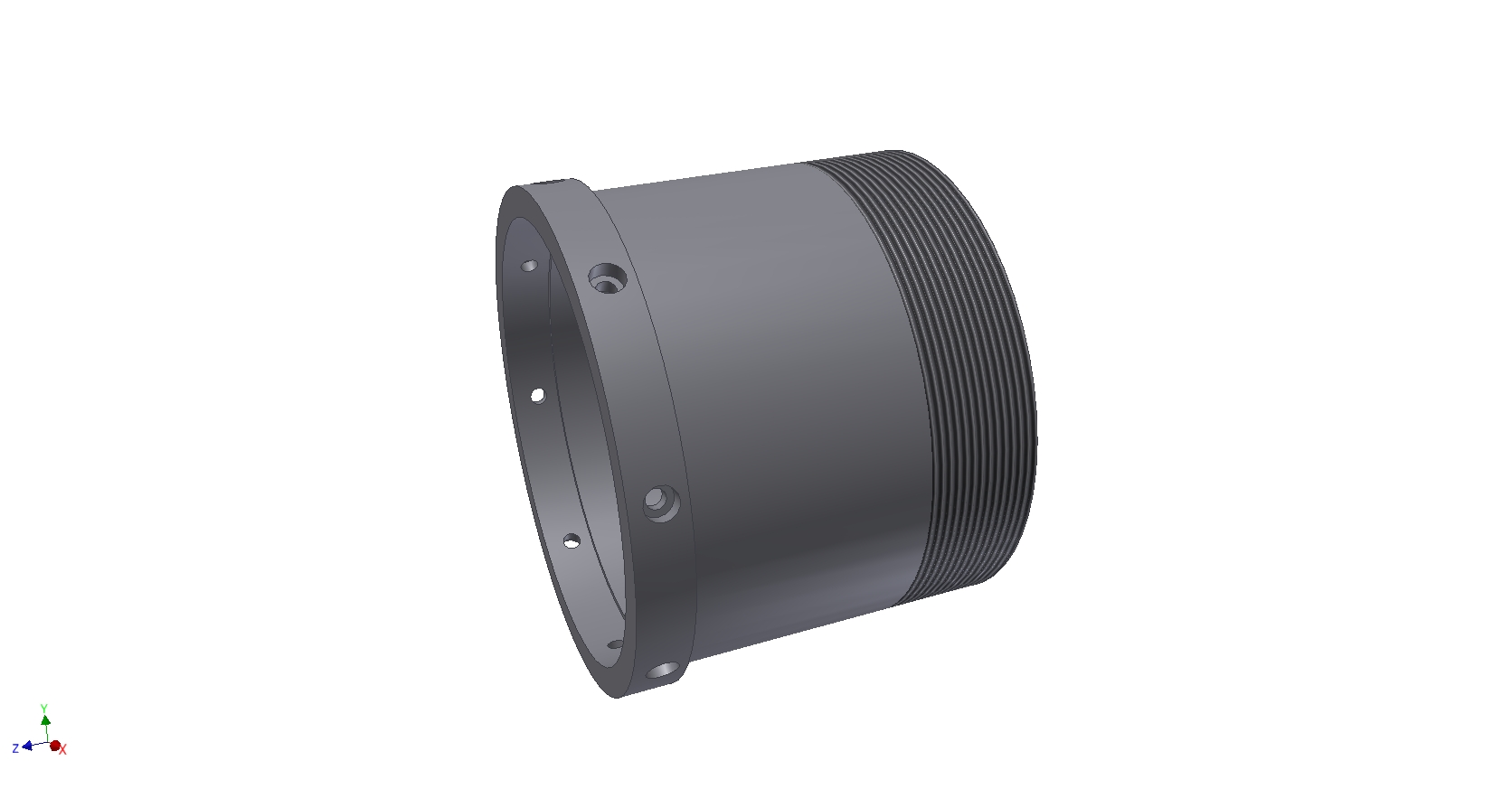 There was a problem, though. The 5″ Colson wheel can only be bored out to about 3.3 inches, and the Dual Non-Interleaved Razermotor had that big aluminum outer case which measured at 3.5 inches. This would have required alot of machining of rubber, which was suboptimal.

However, the original Razermotor V1 (dear god that’s an old post) had an outer can diameter of 3.25 inches, the maximum diameter a 125mm scooter wheel can be bored to. Its successor, Razermotor V2, had the same dimensions. Conveniently enough, a 5″ Colson can be bored to 3.25 inches with no issue. So the solution was to make a longer can version of Razermotor V2 to fit the existing stator of the DNIR. 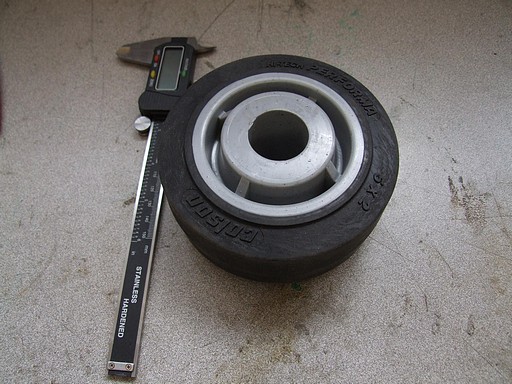 This is a 5″ black Colson wheel. It is in fact the 100th build picture of RazEr rEVolution, continuing my streak of photographing utterly boring subjects for the centenary build picture. To bore this wheel out, I needed a lathe big enough to grip the entire outside of the tire. 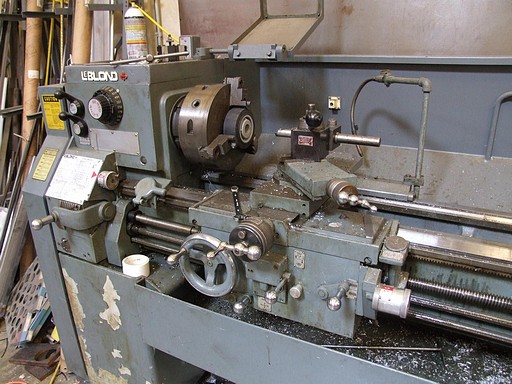 Luckily, one existed in the form of a recent addition to the vehicle teams shop: a late model 19″ LeBlond Regal . This thing is the size of a car, and before I hopped on it to start messing around with the controls, I have in fact not seen it ever run. But run it does, and it’s probably now my favorite heavy metal mayhem machine on campus (no less because I have access to it 24/7 and it has all the nice features… minus a DRO). The installed chuck is a 10 inch type which opens wide enough to shove the whole Colson in.

Even more luckily, the only accessory it came with was a boring bar. There were other tool blocks to fit the toolpost, but I would have to “borrow” the tooling of the other machines to use them. 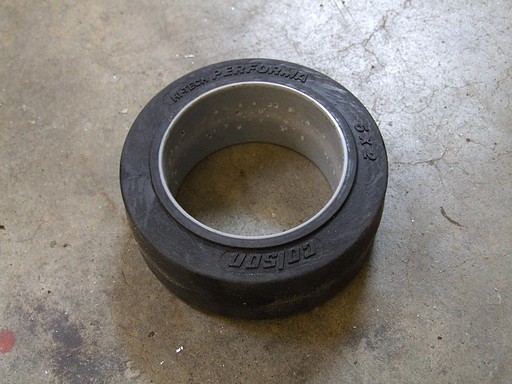 A few minutes later, a centerless Colson. The cores of these things are made of polypropylene, so they’re exceptionally easy to machine. 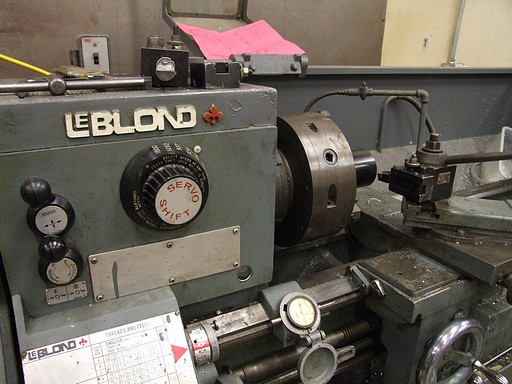 I ordered my usual Giant Steel Pipe from Speedy Metals to build the new rotor.

This is where the horsepower and mass of this thing really shined. By this time, I had already assembled some basic tooling, and was having fun making 3/8″ inch wide bright blue steel curls that were several feet long. Technically that’s a bad thing to come off a lathe during operation, but it’s a welcome change from the slightly anemic Old Mercedes (I haven’t thought of a snappy nickname for this one yet, but nothing short of Leviathan or Behemoth or Kraken or something would suffice).

I also spent a little while reading about how the Servo Shift worked. This was LeBlond’s “thing”, and it was pretty much an automatic transmission for a lathe driven by hydraulic cylinders and controlled by electrically actuated valves with switches as feedback (Turning the big dial selects which set of switches the gears have to move in place to trigger). The spindle literally jiggles back and forth while the shift is occurring (in a manual transmission lathe, you jiggle the spindle yourself to mesh the gears together). This machine completes the cycle in a second or two, which apparently means the Servo Shift is working exceptionally well – it sounds like an utter pain in the ass if it ever breaks.

I love overly complex mechanical solutions to a simple problem. The rest of the variable-speed machines here use belt-based CVTs, which are far less parts but less heavy metal.

Okay, enough diddling. Time to make a motor can. 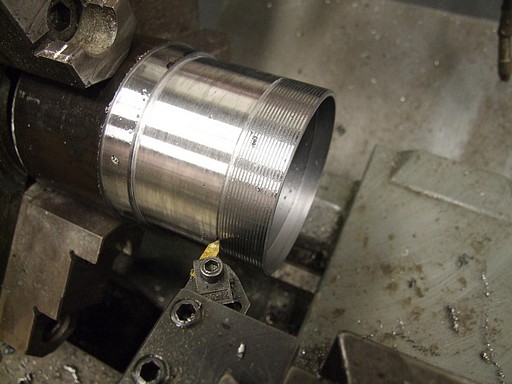 The protoform can emerges. This is actually the second attempt. On try number 1, I was still getting used to where the threading controls were and how they functioned specifically to the machine, so after almost finishing the part I accidentally started the carriage incorrectly and instantly plowed off all of my threads.

The thread is a 3.25″-24, which is not in any standard catalog of threaded objects. It just means I have to make my own matching nut again. 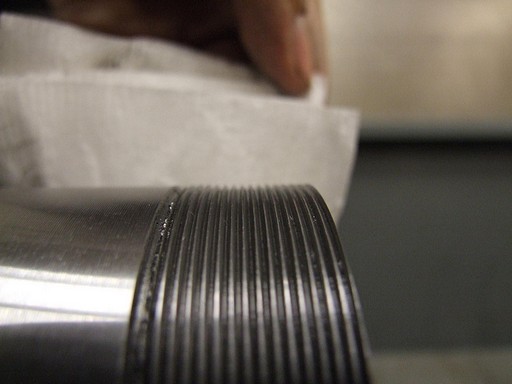 I borrowed a Nice Carbide Threading Tool from the Edgerton Center Student Shop, and its niceness shows. These were cleaned up a bit with a pass of Scotch Brite. 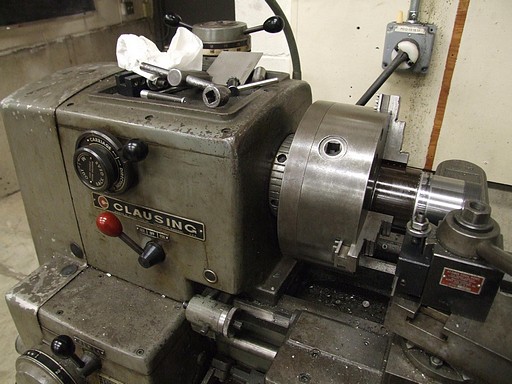 Unfortunately, hugelathe didn’t have a parting tool yet, and other tools couldn’t be used on it again because of toolpost incompatibility. I therefore had to transfer the part over to another machine to perform the cutoff. In this case, it’s the second largest machine in the shop, a Clausing 4900 type. 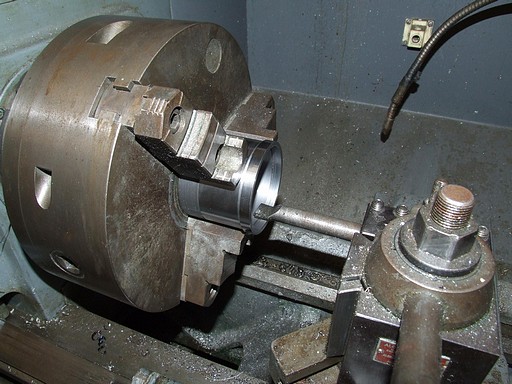 After the cutoff was complete, I transferred it back in order to finish the stepped bore for the endcaps. Tossing a part between machines like this is risky for concentricity unless the workholding implements are exceptionally well-made and precise. The old American machinery did not disappoint. 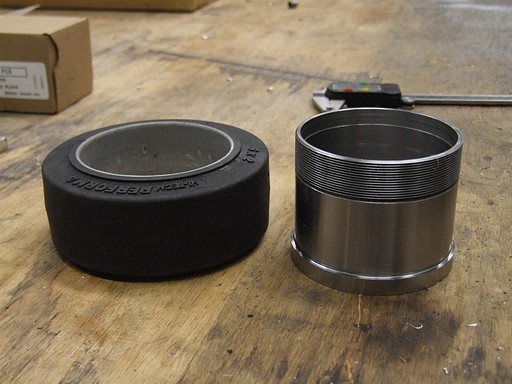 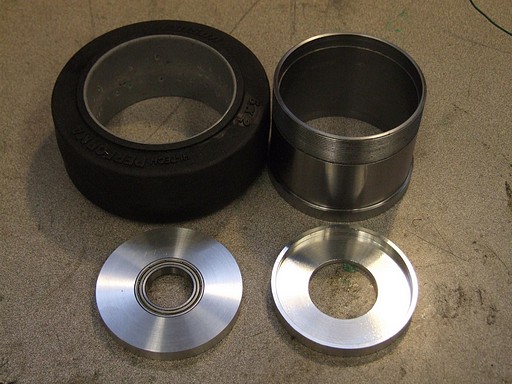 The next day, I returned to remake the endcaps. These now mount directly inside the steel rotor, so they’re smaller in diameter. 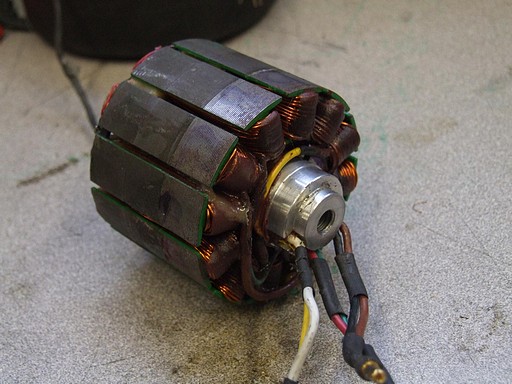 I finally took apart the DNIR to recover the stator and center shaft. I’m glad to see that even after being stuffed into a rock tumbler posing as a wheel, the stator, windings, and sensors are all intact. However, the winding potting epoxy, which I used a cellulose filler (read: paper fluff) for, seems to have charred from the heat. That was quite interesting to see – at first I thought the windings were burnt, but it’s just the paper fluff not handling high temperatures very well. 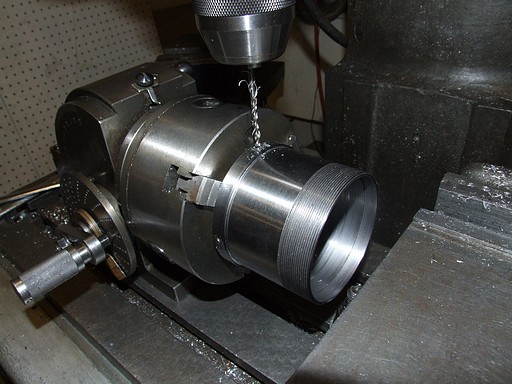 With the “protoform” can and endcaps done, it was time to drill the radial mounting holes using my trusty indexing fixture.

I still have to glue the magnets inside the new can, but after that, I should be able to just put everything back together and have it work. This takes care of the back wheel of RazEr – the front wheel is less of a priority, but given that I have another Colson, I will probably go ahead and finish that too.

Oh, yeah, and fix the controller. Hmm, this might take longer than anticipated…

One thought on “Revisiting RazEr: Finally getting rid of those concrete wheels”