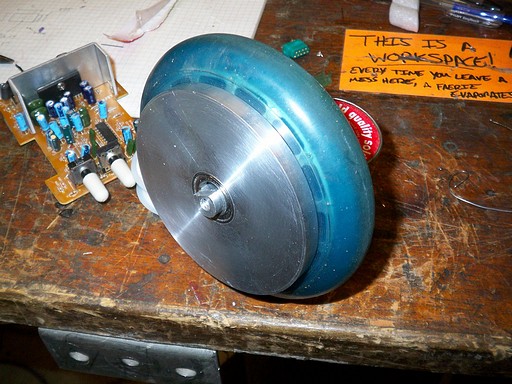 Oh man, it’s ALMOST THERE! Spring break was too short, or else I partied too much at the Media Lab. Either way, OH MAN, IT’S ALMOST THERE! Build pics from the past few days… 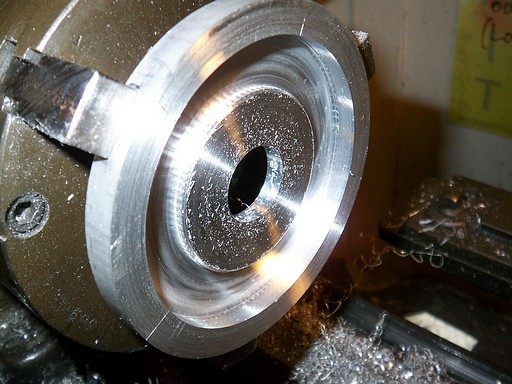 So, to make the motor endcaps, I had to perform some slightly odd machining. The endcaps are dish-shaped, which would have been simple had there not been a lump in the middle to house the axle bearings. In order to make this lump in a dish, I needed to plunge cut into the face of the dish by about 2 millimeters.

This was a simple enough task when I had access to an awesome shop full of precise machinery and tooling out the nose, since some careful boring bar work took care of it the first time.

Unfortunately, I only had my not-boring-bar. Despite my best attempts at grinding the proper angles to let it plunge cut, and trying to align the toolpost to my best ability, it still sucked ass. I decided to wait until the building was vacated to keep working, since although the tool did cut, it made a 9000+ decibel high-pitched squealing despite all attempts to quell it. So there’s a very good reason I waited until 4AM to finish these things…

And so above is a picture of the First Attempt. All I had to do was make a trench big enough to stick a real tool in, or use the Not Boring Bar like how it’s supposed to be used (which is how…?). The outside is decent, but as you can see, the inside surface is horrific. 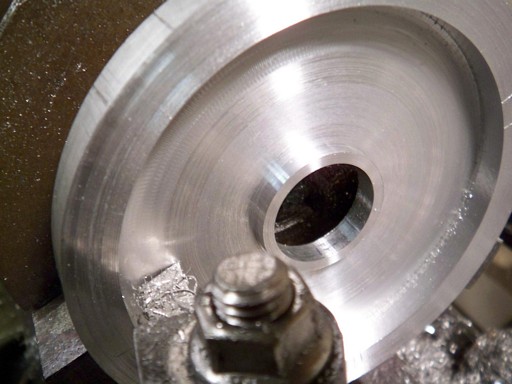 A quick run-through with a pointy tool solved the problem, however. It turns (hehe) out I cut a bit shallow, but fortunately, the custom-ground HSS bit could face cut a few hundredths and clean the inside corners to boot. 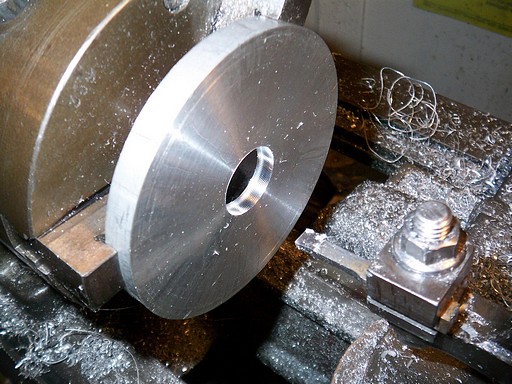 Flipping the thing around to bore the bearing cavity. As usual, it was ghettocentered with additional assistance from a stack of milling parallels jammed between it and the chuck. This insured the stator against being completely off-axis from the can and blowing things up like it did on the previous wheelmotor’s first build attempt. 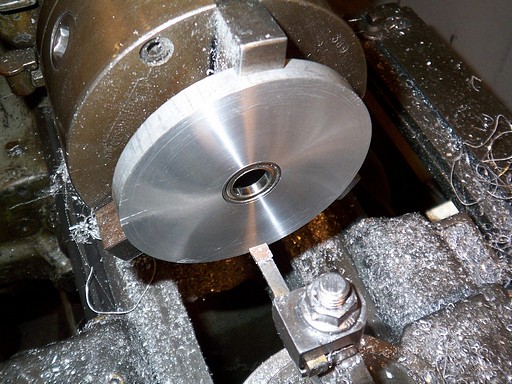 Done. This is what I call a “Loctite finish”, which is when the finish is so smooth and accurate that whatever is being mounted slips in with a modest push of the thumb. With some green Loctite (I prefer 609 ultra-thin retaining compound) in the mix, the part will never come off again.

(BTW, I lost the above image twice due to WordPress’ curious habit of making “undo” remove everything you’ve done for the past 5 minutes….) 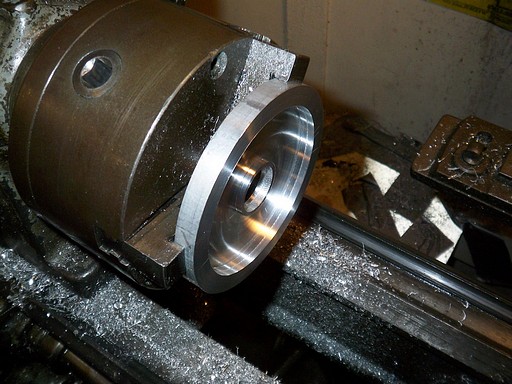 And so with lessons learned from the first part, the second part was much, much smoother. I ground one of the 60 degree threading tools with a rake and side clearance angles so it could take the plunge smoothly. The procedure was to plunge cut, then move the tool in and out radially, making a wide slope-sided trench, feeding in more with each pass. When the sloped sided trench had been cut to the proper depth, the not-boring-bar was used to square off the corners. 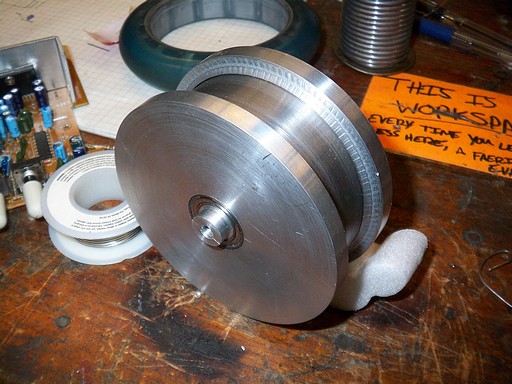 The last step was to trim the diameters and cut the odd taper to mate with the scooter wheel. The diameter downsizing was smooth, the taper was not. There’s one downside to machining on low sleep reserve – you also have low common sense reserve. It would have been greatly smoother if I had set the compound slide at an angle and fed it in and out, like how you’re supposed to cut short tapers.

But instead I angled the tool itself and brute-forced it. Chattery results clearly shown. The dimensions and such are acceptable, but the finish is total bullshit. I slid some sandpaper over it to try and redeem myself, but decided it wasn’t worth the effort.

It’s on the inside of the wheel anyway…. 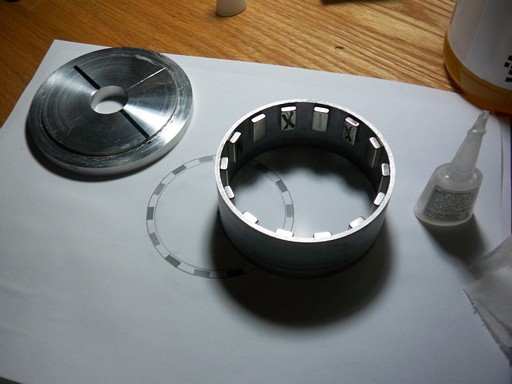 Hey, it’s the 100th build picture of Reloaded! I have a habit now of documenting every little process involved with my projects. This is good, I suppose. Too bad the 100th picture can’t be of a finished product.

Instead, it’s of the magnet can. There will be 14 magnet poles (7 pairs), each of which is composed of either 2 or 4 mini-magnets.

Thin CA wicked into the gaps between the magnet and the can held them in place well, and was also more convenient than making a mess with epoxy. I printed a 1:1 template from Gobrushless to help with spacing the magnets. When I’m happy with the magnet arrangement, I’ll lock them in with said epoxy.

The round aluminum piece in the background is the original “failed test piece” which I turned into an axial spacer for keeping the magnets the right distance from the ends of the can. 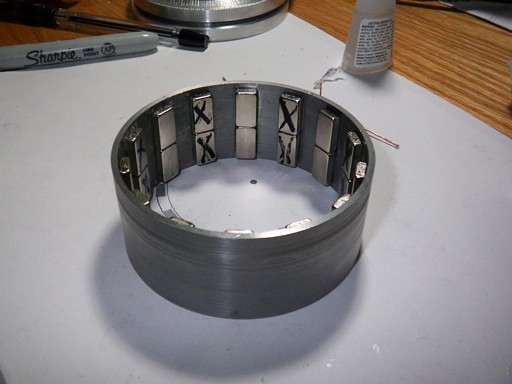 At this point, I wasn’t too sure whether or not to proceed. 28 magnets around the edges give me a near-perfect filling. Unfortunately, this is actually disadvantageous to an extent, as past a certain field strength, core losses start increasing and efficiency suffers. On the other hand, I stand to drop the voltage constant of the motor even further, making a slower, and hopefully torquier motor. But only 14 magnets gives rather poor filling. If these were, say, 10mm or 15mm wide magnets, I wouldn’t complain. 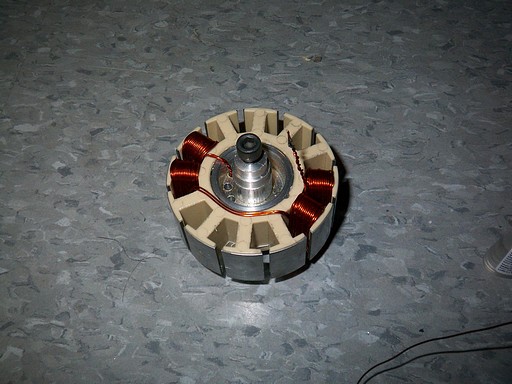 Intermission! I took the advantage of having my fingertips covered in a thin layer of CA glue to wind the core. Here’s one phase completed. The winding is “distributed LRK” style, with two-stranded 22 gauge wire looped 24 times around each pole.

Unfortunately, even with CA-shell assistance, I still do not have Manly Engineering Fingersâ„¢ and doing this took quite a bit of skin off both of them. The stator was mounted on something solid so I didn’t have to hold it, but pulling the wires tight did me in enough. I need to go find some gloves or something. 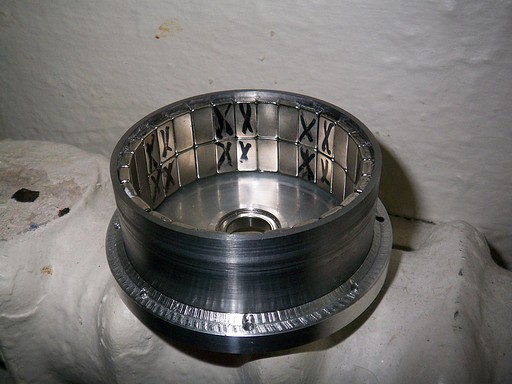 So I gave in, and shoved the rest of the 28 magnets remaining into the can. Bryan, you can kill me later. I promise. Just let me get one test run in.

I had 56 magnets exactly and couldn’t stand ruining my circle. How’s that for vanity?

Additionally, I decided to designate one of the endcaps as a permanent mount for the stator. Currently, the piece is on the radiator with the epoxy setting. Why?

If you have ever pulled the can off an outrunner motor (or yanked the parts of any permanent magnet motor apart), you know the magnets are very much attracted to the iron core of the rotor. On largeish outrunners, this force can be significant. On this fucker, it’s insane, and I’m going to make a jig to mount the stator without killing myself. The first time I brought the stator near, it nearly sheared off my finger because it flew so fast into the center of the magnet ring. The only way I could get it back out was pushing on the stator as hard as I can while gripping the can. And then it wouldn’t just fall out, because it kept getting sucked back in…

Hopefully, with some Ã¼berpoxy holding the can in the Designated Endcap, I can bolt this endcap onto something, say the bottom end of an arbor press, attach the stator to the ram, and slowly drop it in.

This must be why permanent magnet motors aren’t made too large.

Anyways, stay tuned for the last few updates, which should be coming soon, assuming I grow new fingers by the time summer arrives. It’s almost moving!