Straight RazEr made an appearance today at the August Swapfest, alongside tinykart, in the usual MITERS weird-vehicles-at-Swapfest fashion. The previous day was a steady effort to finish the vehicle that lasted about 28 hours – great, because the day before I slept what amounts to an entire day so that puts me about where I should be…. right? Overall, I declare this thing done. It works great for what it was designed to do: go really fast in a straight line. The minimum speed dictated by the pickup of the Turnigy controller is something like 8 miles an hour. The acceleration is even more brütal and uncontrollable than melon-scooter after that.

I have yet to clock the top speed of this thing since there wasn’t enough of an open stretch (that’s totally flat) to hit top speed, but the numbers show a top speed of about 35 miles per hour. 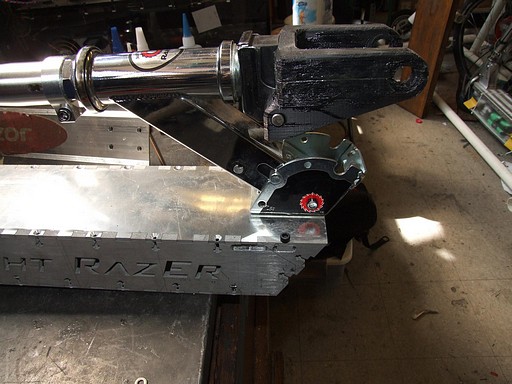 Since the back half is structurally done, it’s time to mount the front. The front end of this thing is stolen off another Razor A3. They come up for cheap on eBay all the time, and honest is the fastest way to get a folding joint, handlebar set, and most importantly the steering neck, for small scooters. The A3 and other front suspension Razor scooters also have the advantage of removable front forks, meaning you can swap yours for an ugly blob of plastic too.

The downside? There’s like 10 scooter back ends at MITERS now. Two of them made it into Fanscooter – perhaps it’s time to start making custom vehicles that only use the back ends. \ 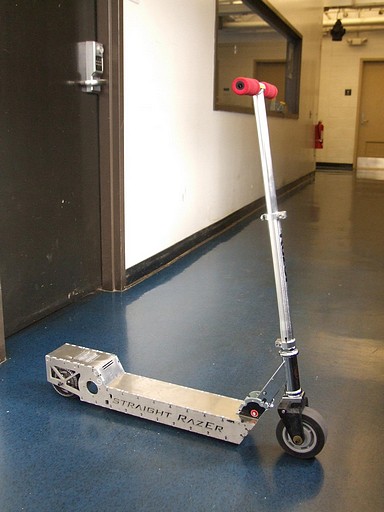 Here’s a rolling frame only shot of the thing. The first thing that I noticed is that the front end is low. Now, while this gives the cool drag racer look, it will be very hard to turn properly. RazEr rEVolution had the same problem; both arise from the fact that the Razor A3’s folding joint has a taller riser tube (that meets the steering tube) than the regular A series.  The difference is about an inch of length.

I ended up switching RREV to a standard A folding joint while keeping the modified A3 fork. I might have to do the same for this if I want it to be remotely rideable – then again, the point is to not do anything besides go straight, right? 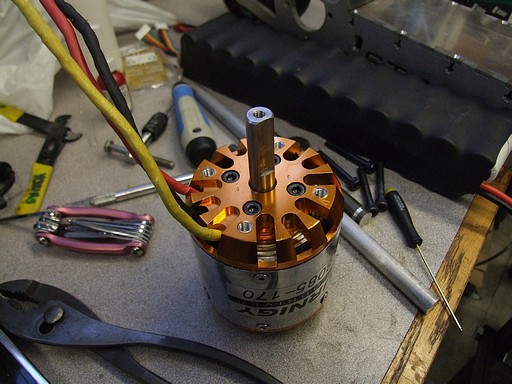 Alright, back to work. I chucked the motor in the Bridgeport (actually, just the shaft) and put the requisite flats on the shaft for proper set screw interfacing. I also had to remove the faceplate and redrill/tap the mounting holes for M6 X 1 screws.

Why? Because I keep thinking these Turnigy 80mm motors have 6mm mounting holes. In reality they have M5 threaded holes. I even specified clearance holes for M5 screws in the model of the vehicle. So clearly I’ve measured this before, but for one reason or another ordered 6mm bolts.

Well, as long as I have 6mm bolts, might as well use them. 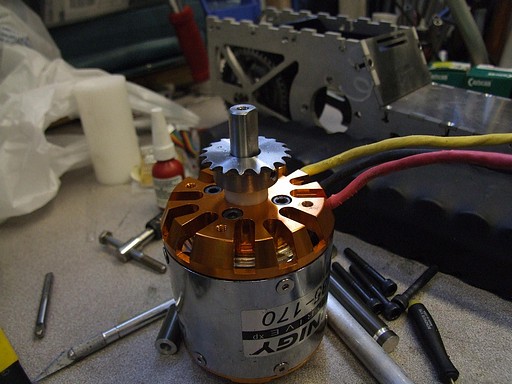 The sprocket is a stock McMaster #25 sprocket with a 3/8″ bore. I bored this out to 12 millimeters, then made a spacer that put it exactly where the model dictated. Because way more power than specifications allow will be flowing through the chain drive, I wanted to make sure those sprockets are well-aligned. 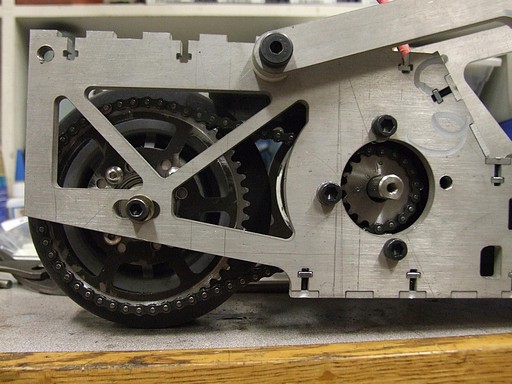 Here’s the completed drivetrain. As usual with waterjet-cut sprockets, this needed a bit of a brute-force run-in period to “deburr” the sprockets and flatten out the taper a little – this time, it was accomplished just by kick-scooting around while the chain was under high tension.

Ihad to edge-machine the large drive sprocket because it was too thick. This was done by gripping the inside bore using an almost-closed lathe chuck with standard inside jaws – I was lucky that the bore was large enough to fit over said chuck. 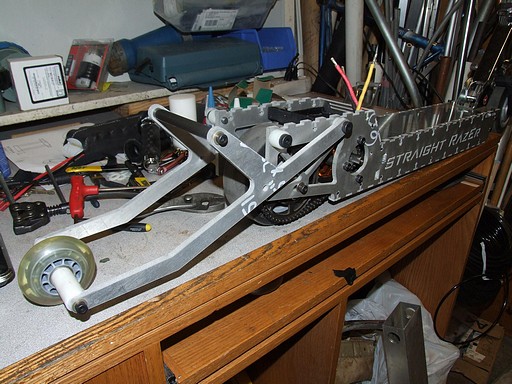 Next, I put together the wheelie bar. This was easy, since it amounted to making some oversized standoffs. The small skate wheel is on an 8mm axle which is end-tapped and mounted to the side bars. 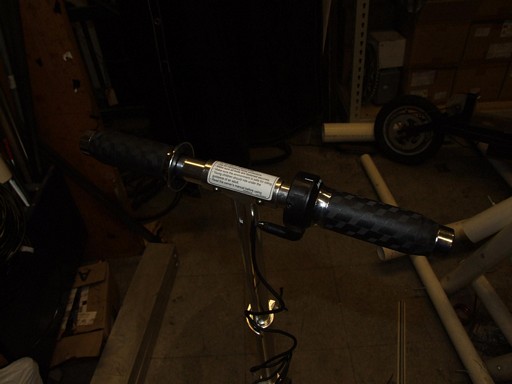 With the drive and motor mounts complete, it was time to start wiring up. Slightly bad picture, but I cut off the bright red handlebar grips and replaced them with a twist throttle and matching other-side-grip-thing. In retrospect, I should have kept the thumb-style throttle I usually use. But again, it’s supposed to be stupidly uncontrollable. 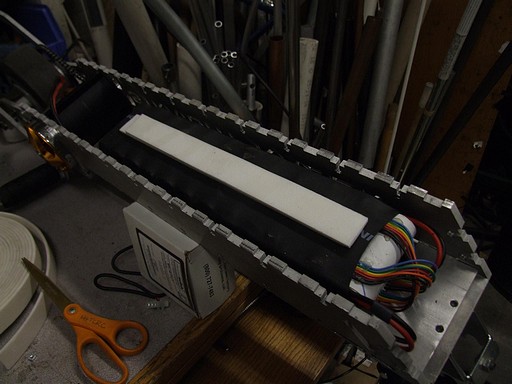 The battery is mounted to the underside of the top plate using sticky-back velcro. I added some strips of insulation foam on the bottom such that the bottom plate is also pressing up with some force when it is closed – no batteries are hanging by only velcro here. The balancing leads will usually be stored in the position shown, but periodically I can access them through the slot in the side. 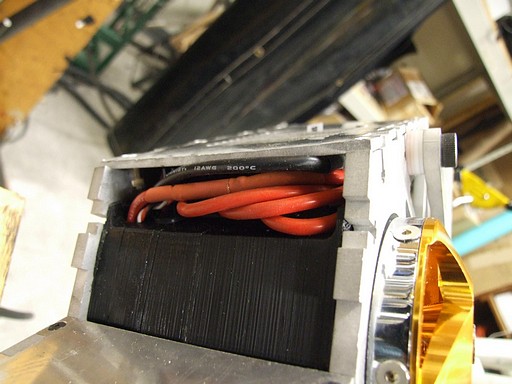 Note to self: wires are big,

I didn’t really think of how much volume the wiring would occupy when I designed the Upper Deck of Turnigy Mounting. As it turns out, alot, especially if they are 12 and 10 gauge silicone insulated wires. There’s almost no space inside and I definitely had to push down on the top plate pretty hard to close it up. I can’t imagine the thing getting any airflow in this condition – so maybe it’s time for an air scoop on the top! 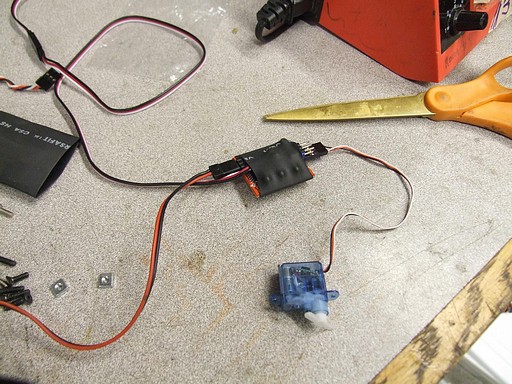 The electronics on this thing are utterly stock and simple – as close to the way my Scooter Manual dictates as possible. This is the cheap Hobbyking servo tester chopped and screwed to accept the analog throttle voltage input, and heat shrunk. There’s no added filtering or complications on it. 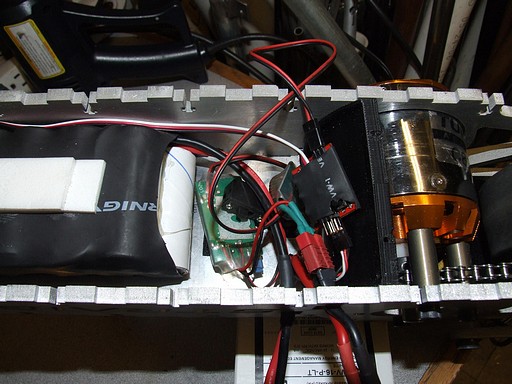 The electronics are mostly just stuffed inside behind the battery, though the big 5v BEC module is attached using velcro too. More strips and blocks of foam were added over these parts so they are also supported by the bottom plate. 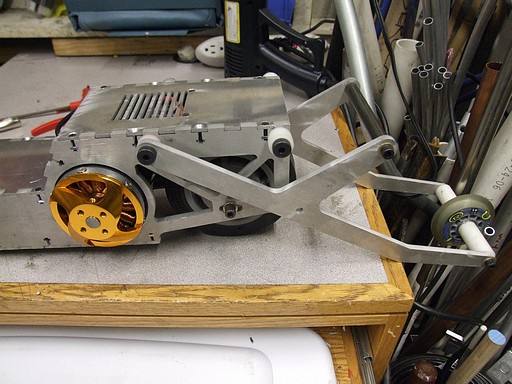 And a shot of the totally finished back end, from the motor side. I like the way the motor is mounted – barely visible, and from afar looking like it’s just part of the frame. 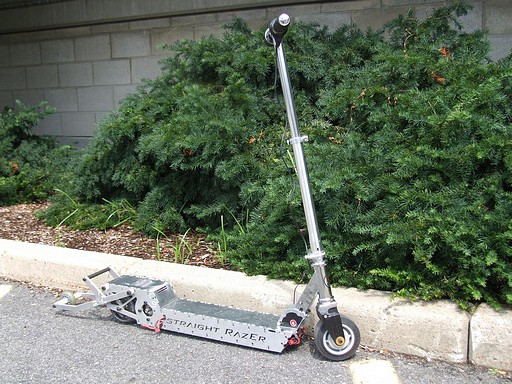 My “impossible to ride” conjectures were proven mostly right – turning is difficult because the vehicle can only tilt a few degrees from vertical until the low front end bottoms out. It does not handle any terrain. And oh yeah, the acceleration. Dear god, the acceleration. Test video will come soon – the videos shot today were mostly unimpressive because of terrain and people. I need to get into a basement freight corridor or a parking garage and just beast it. 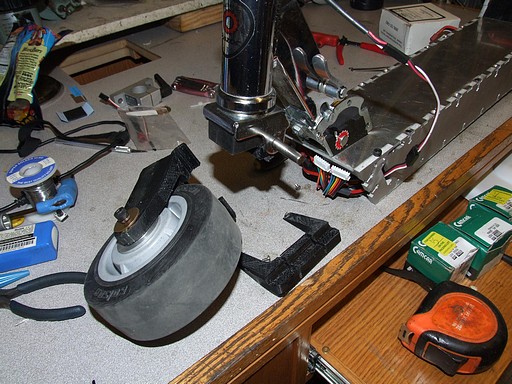 This is what happens when you slam down the front end from an epic wheelie launch, if your front fork is made of shady 3d printed plastic.

Oops. Guess I’ll be changing that.