I’m just really bad at explaining things lately, aren’t I? So, watching the following video is a prerequisite to understanding. (TechTV link) 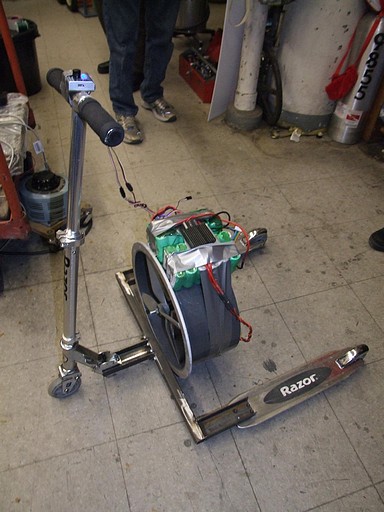 Assembled in just under 5 hours, Fanscooter is an attempt to put the latest iteration of the HFF onto something more interesting than a shopping cart. But, what can possibly be more interesting than Fankart? Why not hybridize it with my fascination with rideable things and make… like, a scooter or something? My dumbest ideas always turn out to be the most hilarious anyway. So there you have it: an afternoon of cutting and welding steel combined with the remains of three different Razor scooters (them having been parted out for use in the Electric Vehicle Team scooter design class by students taking 2.007)

Wait, cutting and welding steel? Like by hand? Damn, I’m getting ahead of myself here. Nothing at all was waterjet-cut or designed beforehand? Or even machined? Nope, not at all – no parts on this …. not-vehicle saw a computer controlled machine tool. Given how many things these days I build that are just premade puzzles, this was a refreshing change, a revisit to the days when I just beasted it by hand without second guessing. I even MANUALLY TAPPED THE ANCHOR BLOCKS that the scooter back ends are bolted to. Not even power-tapped with a cordless drill.

The story of Fanscooter actually began a few months ago, when I was sent this image by Ryan You-Need-To-Get-A-Website-So-I-Can-Link-You-Like-Shane Archer:

I just can’t take such an absurd image not seriously. Fanscooter kind of brewed in the very darkest basement machine rooms in my mind for a while, since even the updated Fankart fan was kind of a whimsical side project. However, once I determined that the EVT students weren’t using some parts of their “kit scooters”, the idea became more serious. It took a few weeks for the energy to build, but today while I was helping with the class, I decided to just go for it. 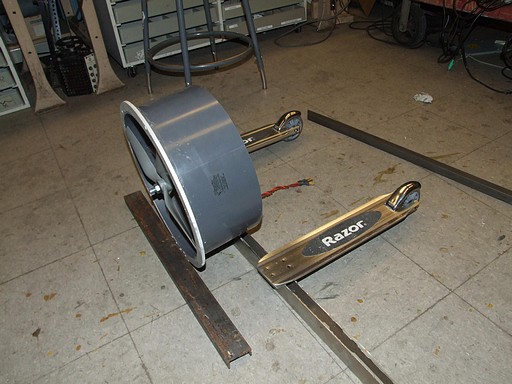 And so here’s the beginnings of Fanscooter. A few lengths of scrap 1″ square tubing and architectural channel, probably all cheesy hot-roll structural steel. Whatever – this was going to be quick and dirty anyway. 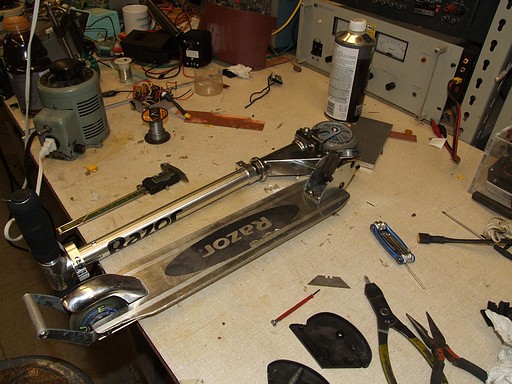 A third Razor scooter frame supplied the “head” of Fanscooter. I got this one after asking if anyone had junky Razor scooters over a dorm email list. As it turns out, given that Razor scooters are a legitimate form of transportation around these parts, lots of people did. I was only seeking a working steering neck and joint, so I took the most utterly destroyed one otherwise. When I took the original wheels off this thing, ball bearing shards and pieces fell out like… well, like if you had completely trashed the bearings in your scooter wheel and then kept riding. Most bearings still need pressing out to be removed – these… well, they rained out.

I had a replacement 90mm front wheel, so I popped it on the fork and the front end was good to use again. 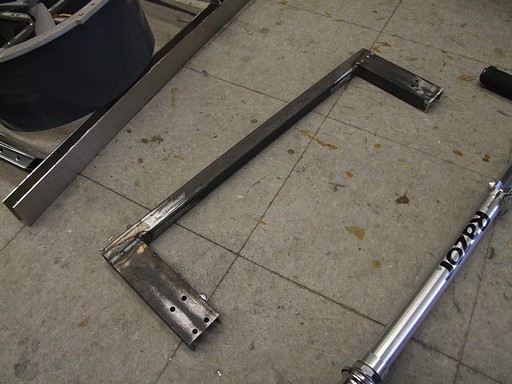 I quickly threw together the cross piece that will join the two scooter back ends together. The steel channel was cut and drilled first, then MIG welded to the crossbar. 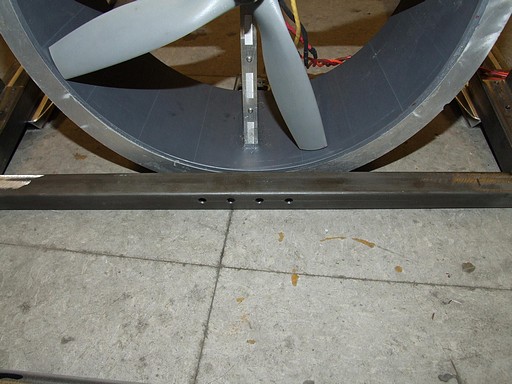 I made a snap decision afterwards to mount the fan directly to this crossbar (it was going to be on some kind of plate that rose up from the bar and was welded to it otherwise). So on the drill press it went; four 1/4″-20 loose-clearance holes added. 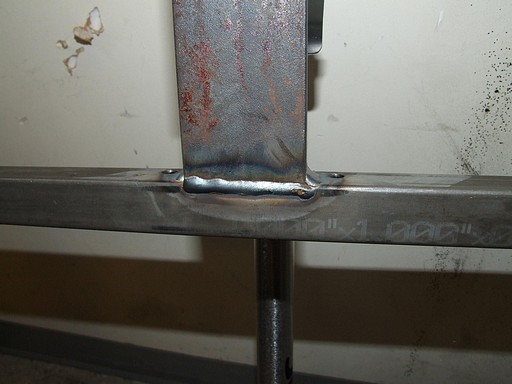 Probably my best MIG work to date. I don’t weld often, so it took a few practice runs to get them looking nearly this good. 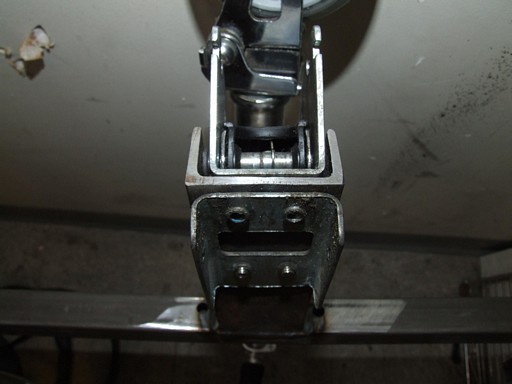 And hare-brained building traps me in a corner.

I found out that the Razor scooter’s folding joint fit into the channel just fine. Problem: I couldn’t reach the bolts that anchor it to the sheet metal piece if the actual steering neck were installed. Conflicting problem: I can’t install the steering neck without access to the pin at the very base of the folding joint. Fully constraining third problem: That pin joint is behind two little walls of steel.

Now, I guess I could have just drilled a big hole in each side, but by that point I had already welded the front mounting channel piece in place, and it would have been almost impossible to throw on the drill press. Not wanting to relive the days of drilling a half inch hole in steel using a hand drill just yet, 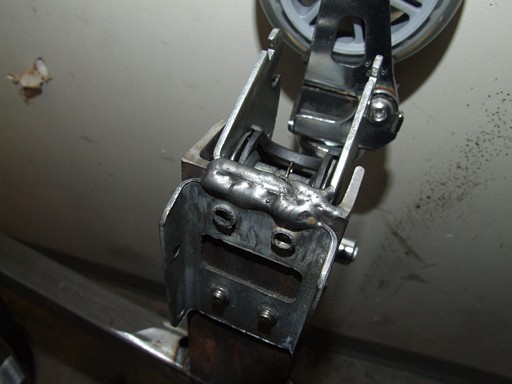 … I just drew a huge, globby gorilla bead on top of all of these plates. It feels great to be back in the hood again. 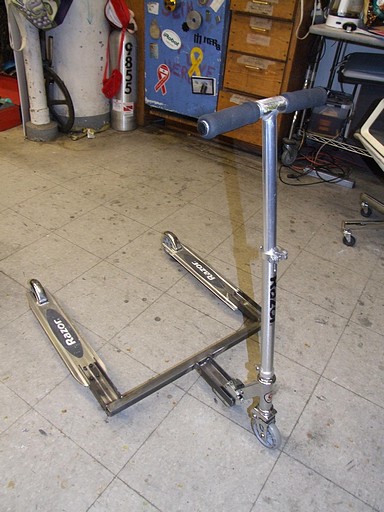 And so the rolling frame of Fanscooter emerges. This thing is so incredibly tippy unless you stand almost on top of the brake fenders. A consequence of it being 2 feet wide because your chunk of steel was about that long anyway. It’s also really flexible, but most of that flex is coming from the points where they attach to the scooter back ends – the 1/8″ steel isn’t what’s bending, more like the 0.050 aluminum. 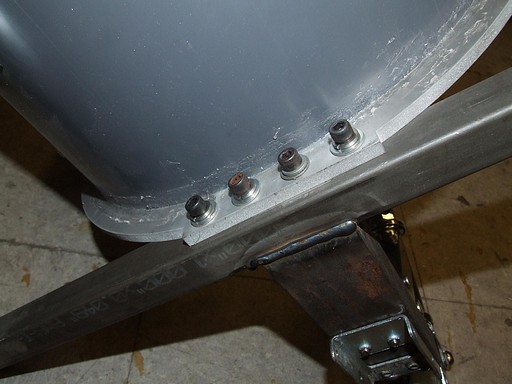 This fan mount is probably the single most structural element on the whole thing. 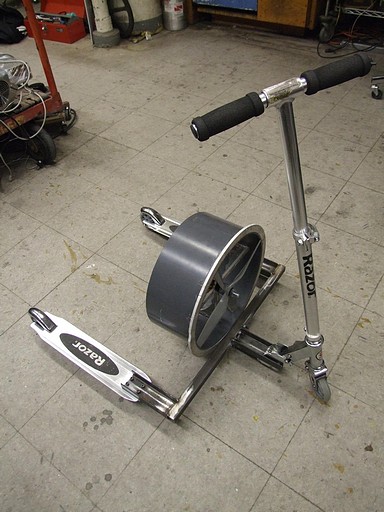 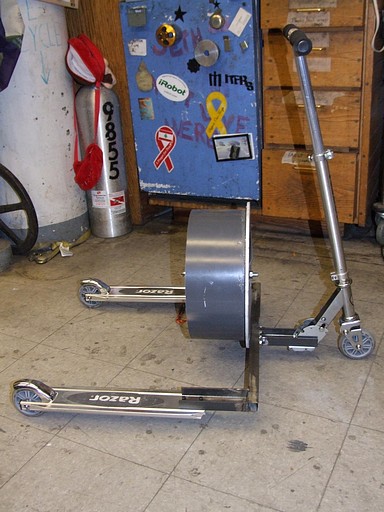 And a profile view. Gee, if I spray down the steel parts in metallic and then chrome paint, you probably wouldn’t be able to if I really been as far as decided to use even go want to do look more like.

….Wait, what was I doing again?

Here’s that detail shot again. Yes, those are massive lithium phosphate (Those Cells We Took Out of Dewalt Drills™) packs duct taped around the…. well, duct, with controls just hanging off the thing. This vehicle is fully knob controlled – that’s a Hobbyking servo tester on the handlebar there.

Unlike a positive traction vehicle, this thing can only ever apply a maximum (but relatively constant) force. So while it might not get you moving immediately (breaking static friction and surface irregularities), as poor Matthew found out, it will generally keep accelerating otherwise until some other equilibrium is reached. Out on the street, it’s more likely to be cumulative rolling resistance from the rough road surface. Inside, it’s probably that door at the end of the hallway. The fastest fanscooter was taken during initial testing was probably 10mph or less. The props will need balancing before we have the … uhh, testicular fortitude to gun that thing at full throttle RIGHT BETWEEN OUR LEGS. No, seriously.

Sooooooo, what project category IS this anyway?