What do you mean it’s almost mid-August already? Why do I still have this big carboard box with McMaster baggies in it? Where the hell is the robot? Why haven’t I even finished the robot’s design? What the hell have I been doing all summer? I’m competing in a month.

This needs to be fixed. 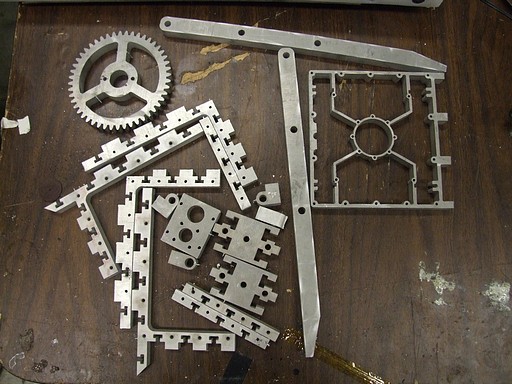 The first round of parts! I’ve officially entered another game of “design the back half while I build the front”. Let’s hope this attempt actually produces something meaningful. 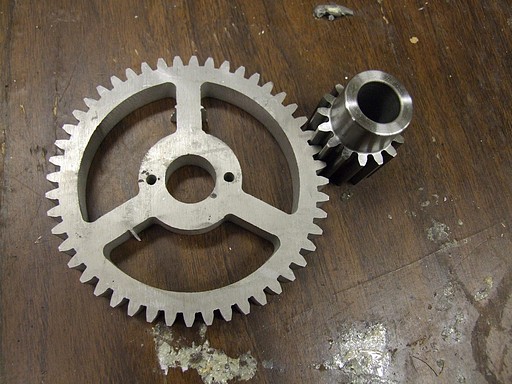 Here’s the main fr0k gear, along with a pinion.  The little sprue-y things hanging off the inside are tabs, or small discontinuities in the cut line to keep the material together so scrap or parts don’t float away. 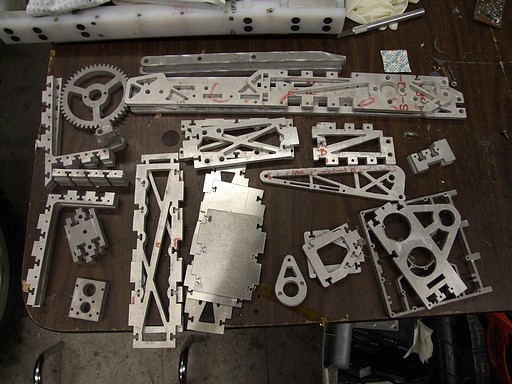 Day 2, round 2. I only have so much access at a time, since otherwise I start getting in the way of legitimate research work. Most structural parts have been cut out here. Amazingly enough, I ran out of 1/4″ aluminum, after going through two whole 12″ x 24″ plates.

While I could have theoretically stuffed everything onto two plates, I got into the habit of cutting one part at a time (minimzing nesting) after losing half of a plate to “buoyant part syndrome”.

The automatically generated machine tool path tends to jump between closed loops that define parts, as well as cross over previously cut features. Great and all to shorten the path traveled, but on several occasions, a small piece of scrap (a hole core, the center of a truss, whatever) is pushed upwards by the nozzle’s powerful return current from the bottom of the machine. Of course the cutting head then moves near this already-cut feature, and runs into it.

One of three things generally happens at this point. If the stock is well-fixtured and the machine is performing a fast traverse, the nozzle explodes, you cry, and the shop managers get pissier than normal because nozzles are expensive. If the stock is fixtured and the machine is performing a slow cut, the axis servo becomes loaded down from pushing against the errant scrap and the controller indicates a fault. The machine stops operating, you become confused, and the shop managers become pissier than normal because resetting the controller is a PITA.

Or, if you’re me, and fortunately have only watched hapless peers experience the former two conditions, your stock gets bumped a subtle, unnoticeable amount. The waterjet then continues making the rest of your features using a completely cocked-up coordinate system, ruining everything.

I could have avoided alot of this trouble by manually routing, but that takes patience and effort. We can’t have that. 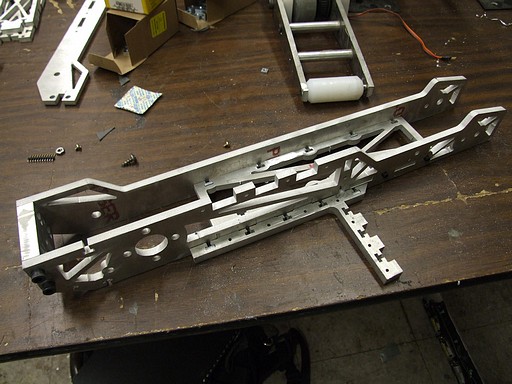 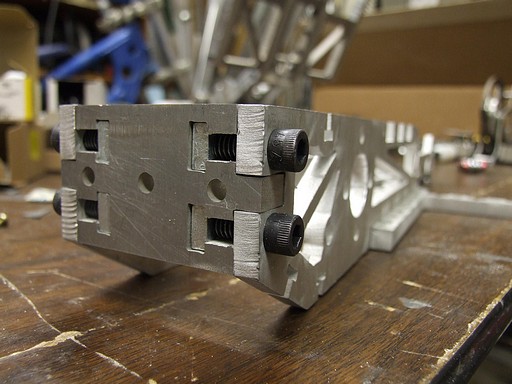 Here’s a shot of the T-nut arrangement. Essentially, the orthogonal nut and slot imitate an end-tapped hole in the metal. The arrange is not as strong as a real tapped hole because of the thinning of material around the nuts and the sharp corners focusing stress, but man does it come together fast.

Slots and tabs take most of the physical loading, as well as positively locate parts. The nuts are just there to keep the thing together. 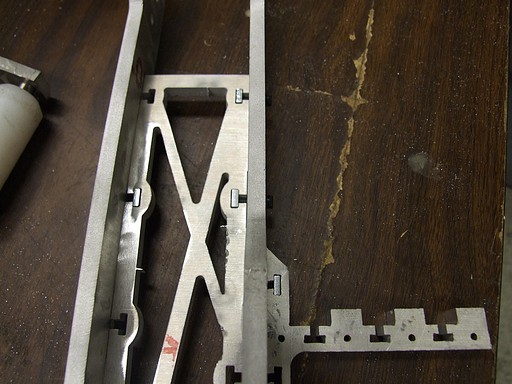 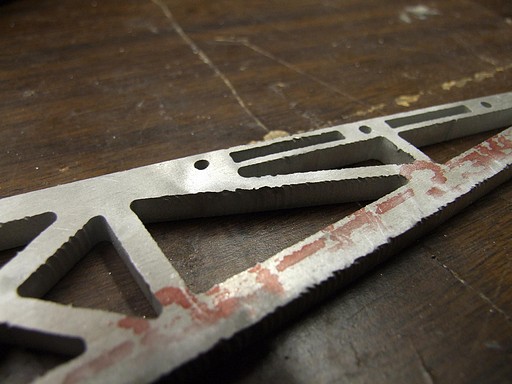 Waterjet weirdness. For one reason or another, it started losing cutting ability on progressive parts. I suspected an abrasive flow problem, but since it isn’t my machine to bum around with, could only continue on slower settings and call in the issue in the morning. 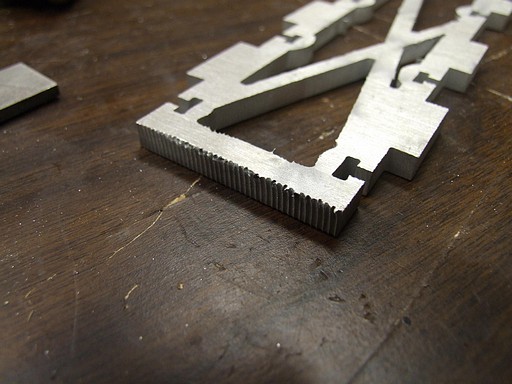 Even more weirdness. I could not explain some of the vertical roughness of the edges on the previous part until I saw exactly what was happening on the next one.

It turns out that my plate was bowed in the middle to begin with. Furthermore, I only clamped it down at the left and right edges. This meant the plate was a rigid body bridging two thin steel waterjet support slats, which is a form of spring-mass harmonic system.When the cut was parallel to a steel slat, the tiny sideways force of the nozzle quickly became amplified, and the whole thing started oscillating. I only noticed after little standing waves formed on the water surface.

The edge was fundamentally straight. A few seconds of sanding completely removed the undesired feature. 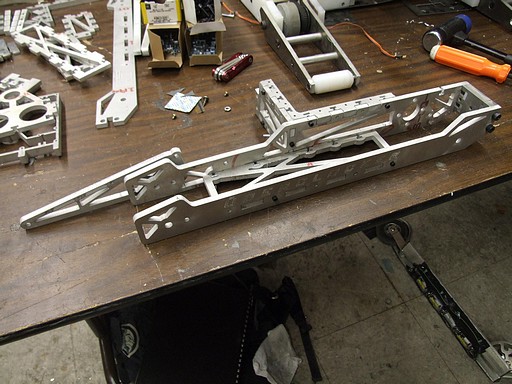 A bit more puzzlebot. Note the lettering on the side. I tested two “marking” functions of the waterjet – etch and scribe. Etch uses abrasive, scribe does not. While “etch” would have made the lettering more visible and made a deeper impression, the variation in nozzle speed when turning corners in the lines meant that there were little divots and deep spots everywhere.

Scribe did not have the problem, but instead, made everything too light.  But it emulated more what a legitimate scribe tool would do, or if I had blackened the area and put it on a laser cutter (light burning and evaporation of the metal surface), so I chose to use Scribe on the robot. 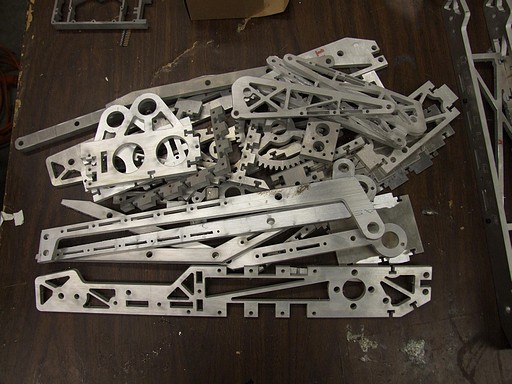 Day 3, round 3. Essentially all structural parts except for the back plate are done. The puzzlebot pile grows some more. 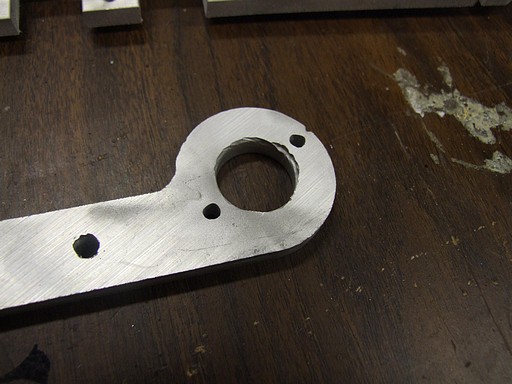 The same issue rears its head again. The first few parts go fine, then it went downhill from there. This is just a level of weirdness I have never seen before. This part is still good, however – just needs a pass with a 3/4″ reamer. 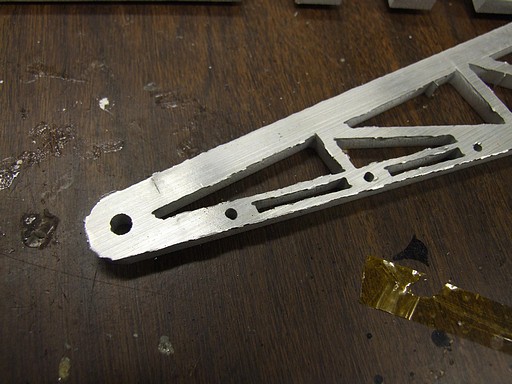 …but this is just barely. Wow. This is what abrasive waterjets did in the 1980s. I actually had to hammer the part out of the plate – that explains the broken flashing around the edges.

However, a minute on the belt sander and a few more with a file and it was good again. 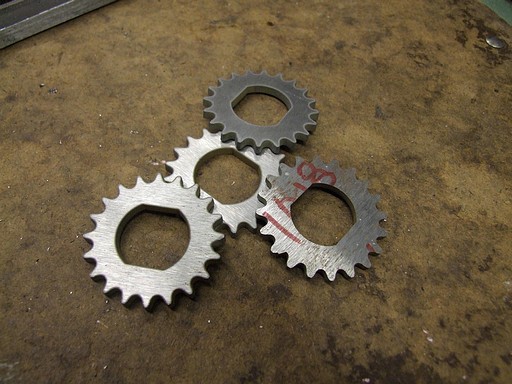 I’ve taken a liking to using the waterjet to create custom sprockets and gears. I’ve found that a standard .032 nozzle can, without taper compensation (i.e. an expensive but badass 5-axis head), cut down to roughly 12 pitch gears before the taper and surface irregularities get nontrivial. With a micro-nozzle, I bet finer gears can be made.

It is more a boon for sprocket-making, since sprockets are fundamentally plate-shaped anyway.  An added bonus is the ability to make custom bore features, such as the double-D bores here. 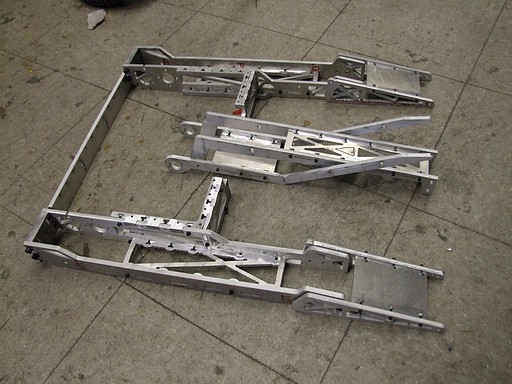 An early stage pretend-o-bot. The whole robot frame minus the fr0k assembly weighs around 5 pounds. 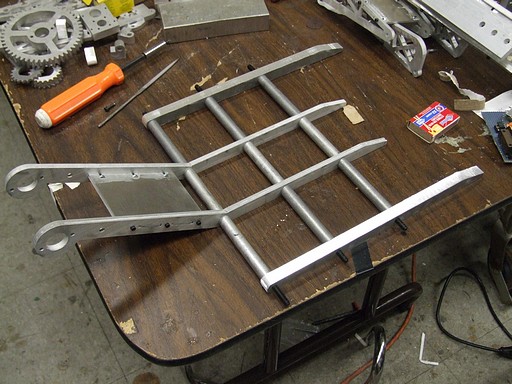 I finally got off my ass and started making parts. This is the basic configuration of the main fr0k. Instead of cool cutout plates spanning the tines, I’ve elected to just use large standoffs and high-strength threaded rod and nuts to bind the structure together. This should actually result in a stiffer structure as a whole because of the ability to put all the material in the middle in compression at once. 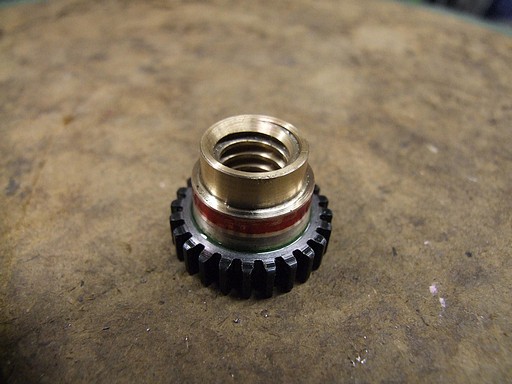 Top fr0k actuator leadscrew nut. This assembly will function like the last one, except everything is bigger. When I disassembled the actuator from Überclocker, I found out that the 3/8″ acme screw was actually bent slightly. This version upgrades the whole leadscrew assembly to 1/2″-10 Grade B7 acme screws.

I found some acme nuts for cheap on Ebay. Sure beat the hell of McMaster demanding 35 dollars for each bronze nut. As much as I love them, I prefer to be non-bankrupt.

The gear was de-hubbed and bored out, then crammed onto the nut with plenty of green Loctite in the middle. The leadscrew nut has a shoulder to seat the gear. Actually, it has two, because I messed up the first try. 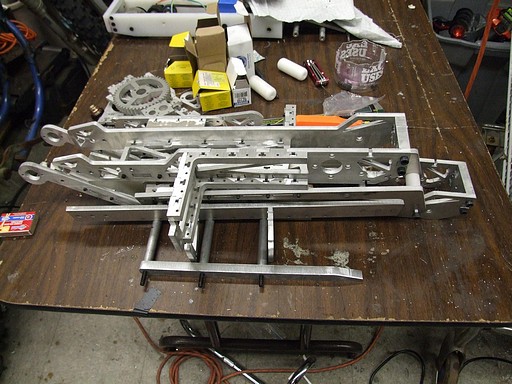 Alright, that’s it for now.  Here’s a pile of robot-looking things.

Still left to do: