hey charles, don’t you owe all of us a dragon*con 2010 event report or something?

Yeah, yeah. The beginning of term, lack of motivation, and the lackluster (but entertaining) run of the robots at Robot Battles meant that I just Haven’t Gotten Around to writing up D*C2010. But I seem to be on a streak of making up for missed writing assignments this week with all the site updates, so… here we go. 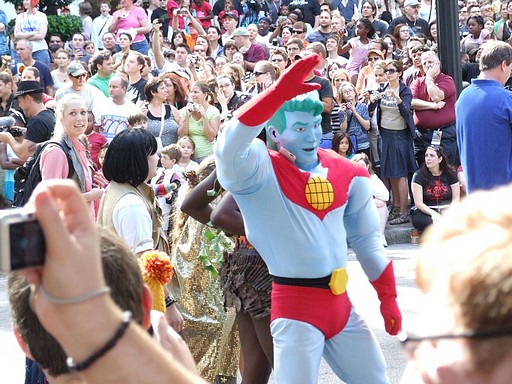 Welcome to Dragon*Con. If you missed my description of it last year, don’t worry. It hasn’t changed a bit. The atmosphere is still as eclectic as ever, and the crowds just as dense. Actually, they were probably denser. D*C is one of the biggest conventions in the continental United States.

But I’m not a fan enough of anything to really enjoy the con for most of its con…tent. So let’s move onto the robots. 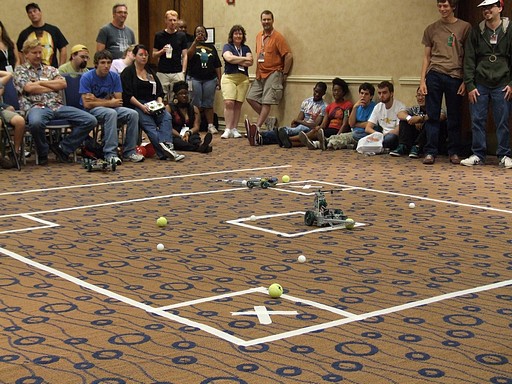 Like last year (and years past), Southern Polytechnic rolled out their VEX robotics kits and sponsored an open build-off on Saturday. The participation was pretty intense, with young children showing up strongly. At the end, there was a ball-gathering competition. 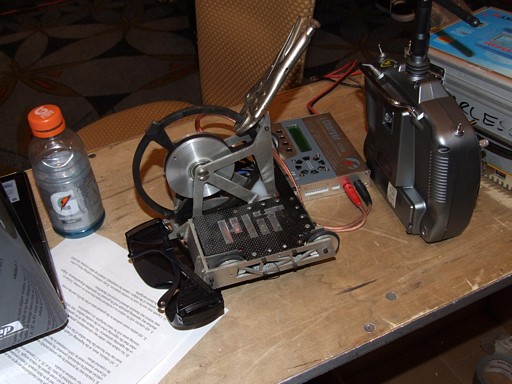 Time to stop diddling. The “Microbattles” event is held on Sunday, before the big competition. NK hasn’t been here since 2008… in fact, when this version was first built.  So NK is running 2 years behind the development curve. How have its opponents evolved since then? 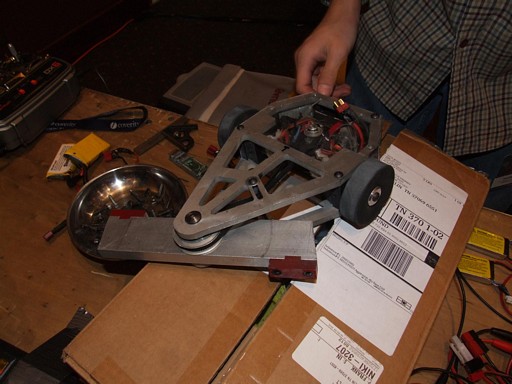 The robot caliber this year is seriously advanced compared to years past – alot of it, in my opinion, due to the fact that the other Southeastern builders that I used to smash robots with have also now advanced to college machine shops and have become spoiled like me.

I mean, except Thomas up there, who’s just magic. 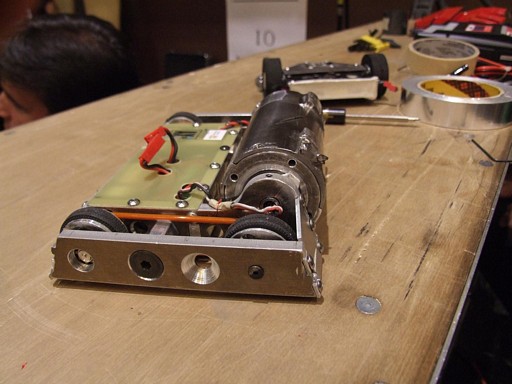 Cake, from the Georgia Tech crew – another one of the high-caliber machined and fabricated bots. 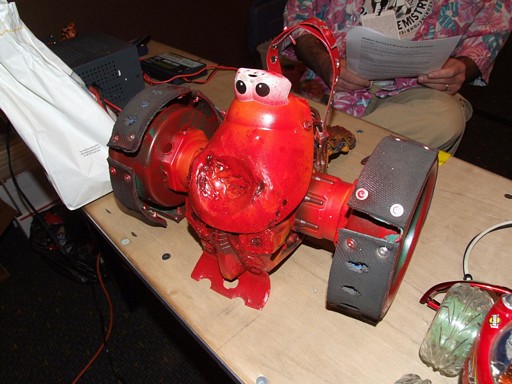 On the other end of the spectrum are things like this, which are built by people who are just out to have some fun and entertain the crowd. 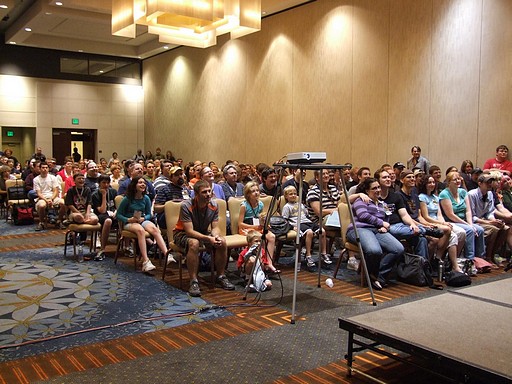 Speaking of the crowd…

The Robot Battles events seem to always have outstanding attendance no matter what. The International ballroom has a seating capacity of several hundred (the exact number escapes me). At several points during the event, it was standing room only in the back of the room. And at least once, who I can only presume was the Hyatt Regency’s fire code liaison came booming over the room intercom instructing everyone who was standing to leave. 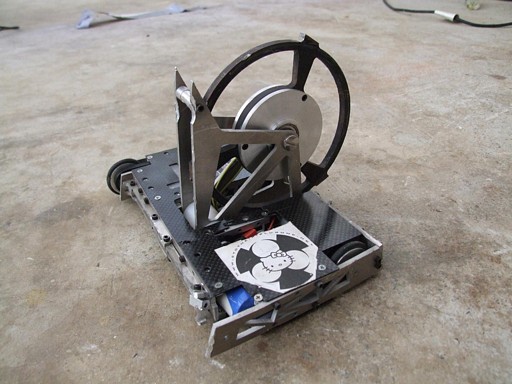 NK made a run through the tournament bracket before being Caked in the winner’s bracket finals. Cake, being a lower hitter, won every collision. I originally was going to forfeit any matches involving the high-energy weapon bots since I was more interested in maintaining NK’s operational status, but hell, it was the finals.

So I went for it. Overall, NK came out pretty undamaged for the amount of ass-kicking Cake dished out throughout the tournament.  No prizes this year, but the finals match was stunning.

The day after was the big robot tournament. 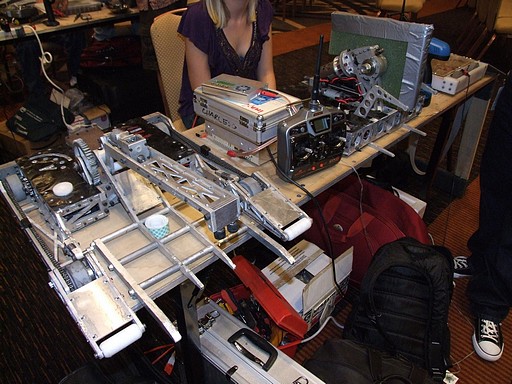 Dragon Con is my annual robot party, since it’s precisely at the end of summer and represents the last bit of fun I’m allowed to have before flying back for the academic term. So I spend all summer building or upgrading the robots, among other activities, and bash it all up at the end.

This year, I brought both Arbor and Clocker. It’s been a while since I’ve run a 2-robot tournament, but with Robot Battle’s more laid back atmosphere, it wasn’t nearly as stressful as Motorama. In fact, I rather liked it. 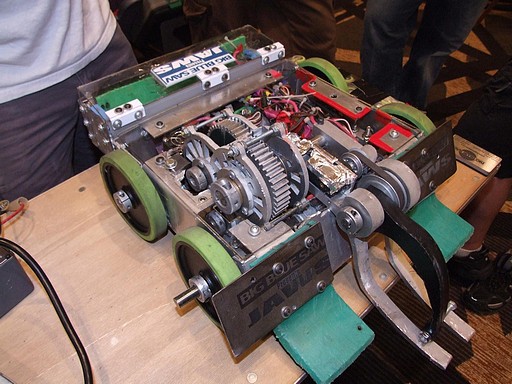 Most of the usual suspects were back, with hacks, mods, and upgrades aplenty. Here’s (Big Blue Saw Presents) Jaws. Also back in the mix was Dale, Evil Robotics, MH, Found Objects, and others. 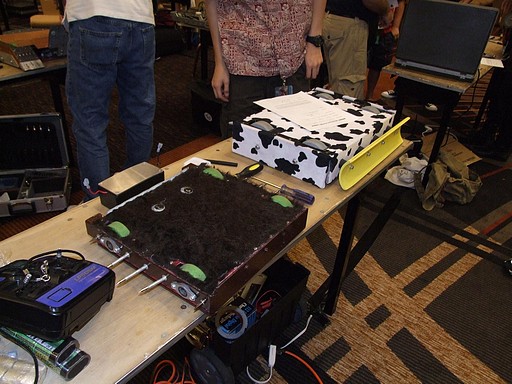 But this year also saw quite a few newcomers. The Armed Robotic Critters, for one, came with a whole fleet of critter-themed 12lb and 30lbers. Overall, attendance this year was back above pre-2009 levels. 2009 was sort of a bad year for the competition due to several builders having to skip the competition. 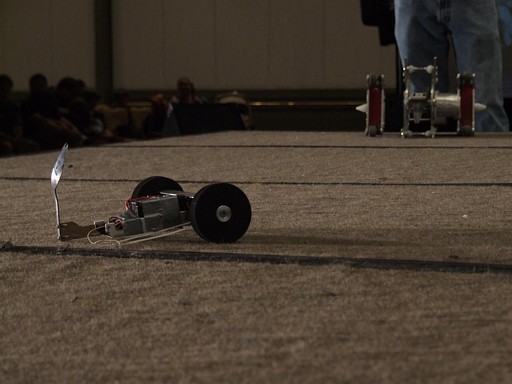 Really it’s not even an antweight, but Seth brought it (and a 12lber) anyway. Just for Grins and Chuckles™.

Only at Robot Battles… 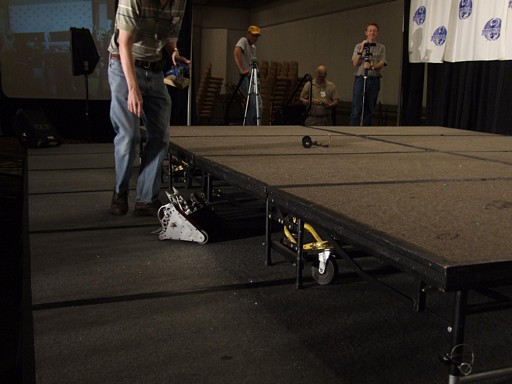 ….does this kind of stuff happen. You know what’s really hard to catch when you’re a 12 pound robot? A 1 pound robot. 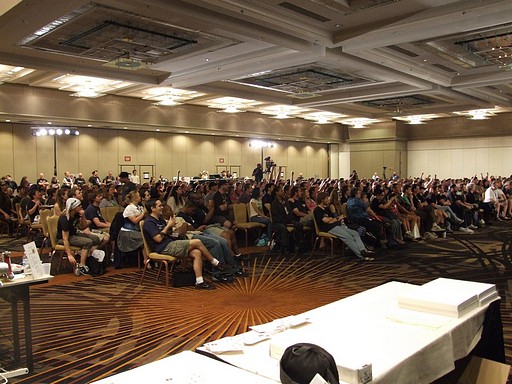 I really can’t say enough about the level of audience energy at Robot Battles. The Regency 6 and 7 ballrooms combined sat over 1000 people….and again, during the event, was reduced to standing room only. The event also encourages the audienec to participate by helping start, end, and occasionally judge matches.

Yeah – you don’t come here for SRS BIDNESS TERNAMINT. You come here to put on a show. 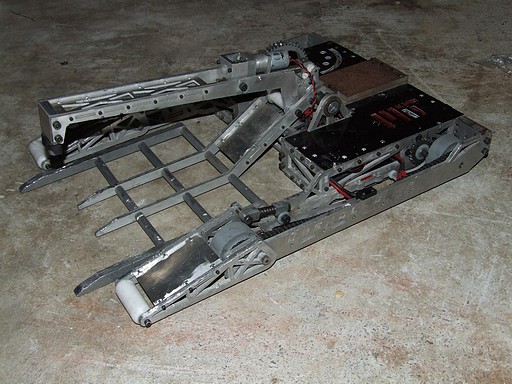 Clocker did great for a while, but then immediately suffered another left-side drive failure. What the hell?

A quick examination revealed that the left gearbox output shaft was poorly assembled (read: did not press hard enough) and slipped its interference fit. Now, what was really weird was that shifting the whole shaft axially some times caused it to re-engage just enough to give the robot differential traction. So Clocker ran sporadically, but was crippled at other times. When the drive disengaged, I just threw on a Zip Tie Ratchet.

Here’s Clocker’s highlights video from the competition. I managed to execute another Robocopter spin with Jaws around a minute and some in.

That’s the move I designed Clocker to perform, and it did so admirably. Unfortunately, the clamp motor was unresponsive, so I couldn’t throw Jaws off the stage. As close as it turned out to the camera guys, this was probably for the better. 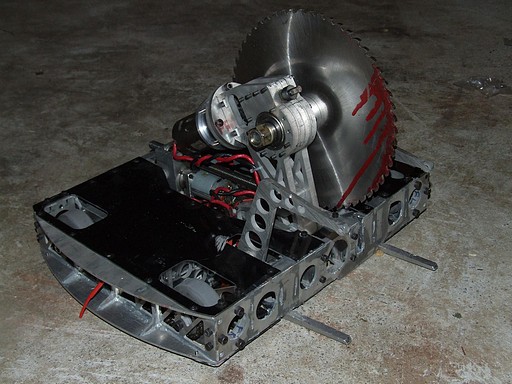 As nice as the upgrades I made were, it still didn’t stop the saw from just catching and binding. I pretty much expected that to happen again, since this milling blade was made for multi-ton machines – not a 30 pound robot. Arbor was visually very impressive and garnered alot of audience applause, but ultimately it suffered two losses because it just couldn’t do anything.

If Arbor is to be actually competitive, I’d have to rethink the whole concept of the robot. Right now, it comes down to an issue of severe uncurable positive feedback – the forces of cutting are squarely directed into jamming the saw further into anything it contacts.

If you observe a regular cold saw or even power miter saw in action, you’d notice the saw’s swing is more vertical than horizontal. In other words, the tangential force of cutting is directed perpendicular (or nearly so) to the direction of saw motion.

Arbor’s movement is very horizontal – made even worse by pivoting the saw at the base of the robot. Therefore, the force of cutting is directed downwards and back into the robot, which is the same force vector I’d generate by cranking downwards on the saw with a pry bar. The net result is that any impact of the blade has to be compensated with massive torque inputs – realistically, more than the worm gear output can probably handle or anything short of an Etek can generate.

Neither a win, nor a fail. I went to the event to put on a show (since there’s really nothing to win), and I think the bots did that just fine. I’m still keen on the concept of an actual working saw bot, however, so don’t expect Arbor to just disappear into MITERS. It will be rethought (possibly while I make sure Clocker’s gearboxes don’t let loose ever again, EVER). 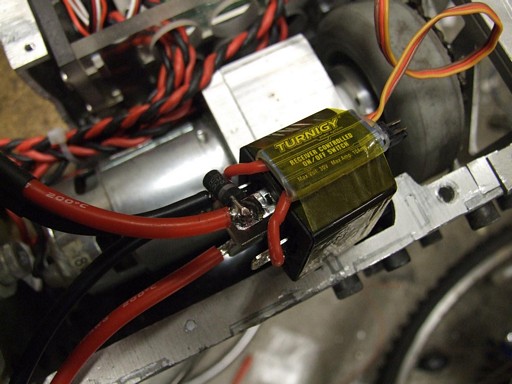 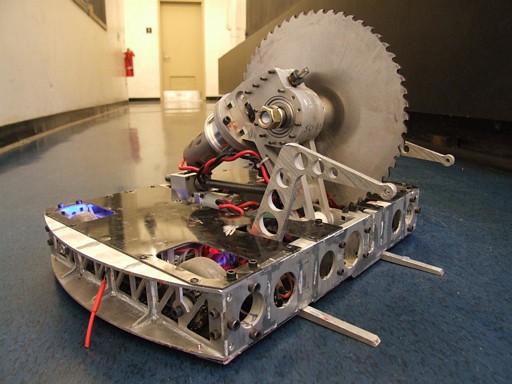 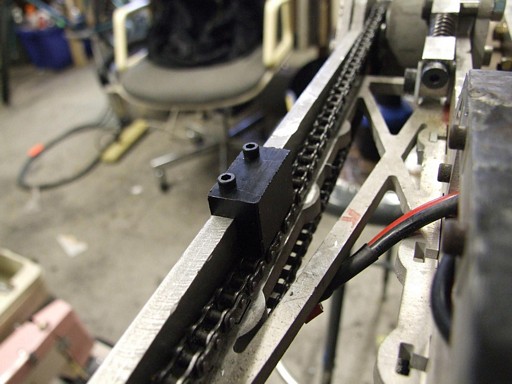 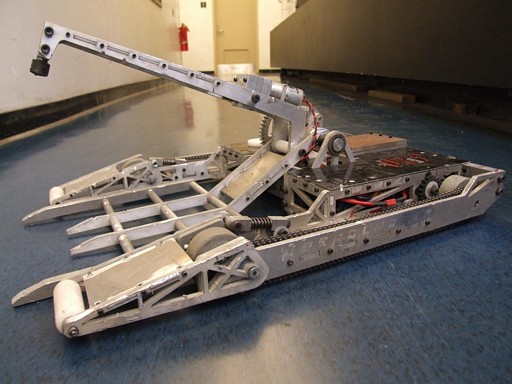 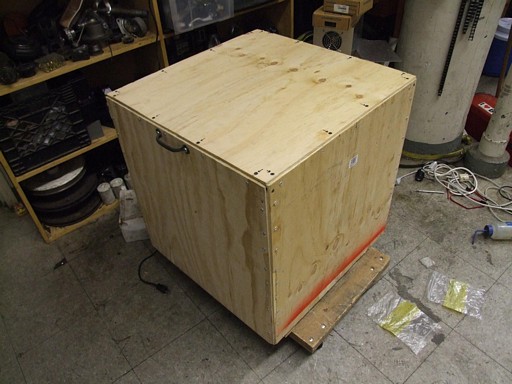