About time, eh? This past summer, I continued my R&D position at the Media Lab while building three combat bots. Nuclear Kitten 5 and Pop Quiz 2 are updates to the insect fleet while Ãœberclocker is a completely new build, exploring new building techniques and technologies.

Sadly enough, PQ2 and Ãœberclocker fell victim to the age-old trap of trying too many new things and making too many changes at once, and not enough testing before deployment. 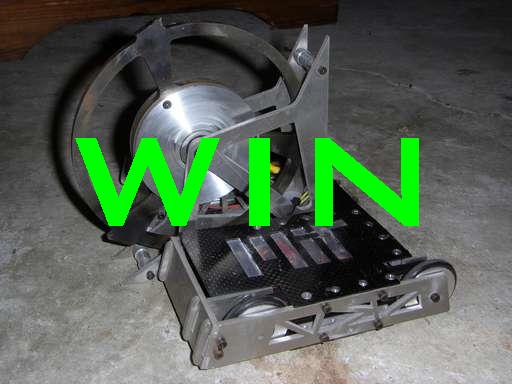 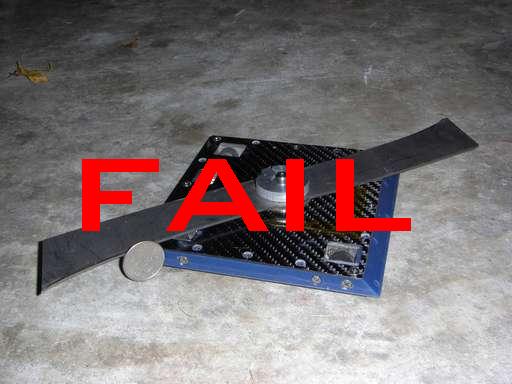 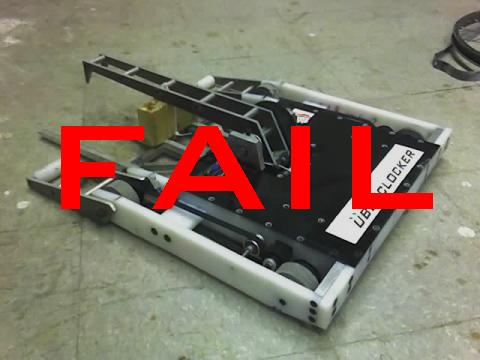 What can I say? While Ãœberclocker looked awesome and had more pretty machined parts than I have ever put on any other bot before, performance was massively lacking. A number of factors contributed to this.

When all was said and done, Ãœberclocker won 1 match, not by its own merits, then lost the next two matches. At the end of my final match, one of the lifter fork motors went up in smoke from me trying to use the fork as a hammer. Compounded with the rest of the failures and the dysfunctional clamping fork, I forfeited the tournament.

All of Ãœberclocker’s matches except for one (due to a corrupted file system on the camcorder’s miniDVD media) are here.

Here’s some action shots of ÃœC at the tournament. 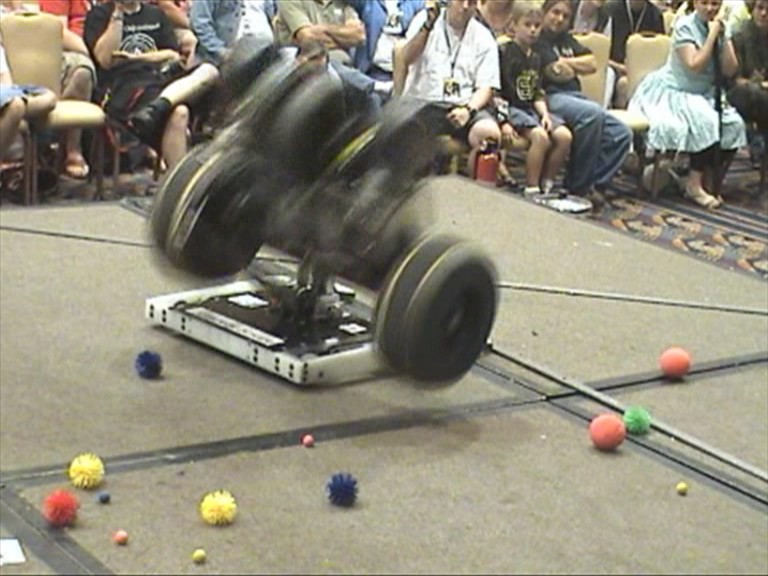 Ãœberclocker initiates a ninja lift on Scimitar. This was one of its only good shots – where it didn’t just fall over. 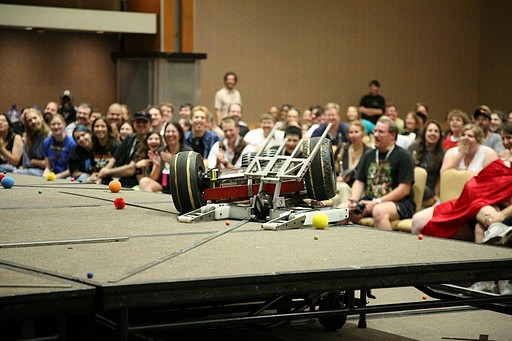 In another match with Scimitar, the two bots perched precariously on the edge. At this point, I had lost the entire drivetrain, so couldn’t quite back him off. 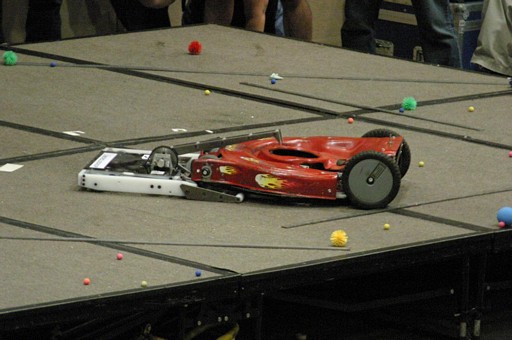 So, what actually worked?

Ãœberclocker is a concept which I want to continue developing to bring it to maximum effectiveness. Design revisions include trying to fix all the problems indicated and making the strong points better. However, I have no targeted event date for the redesign, and it could be as late as Dragon Con 2009.

It’s the flattest active-weaponed antweight ever. Again, just like Ãœberclocker, the concept was great, but my lack of attention to detail ultimately tainted the execution. This build fixed one of the major shortcomings of the original Pop Quiz – a weak, unreliable weapon. This time, the blade was frighteningly fast, to the point that I never actually full-throttled it due to a fear of the bot just taking off.

The tradeoff was the unpredictable drivetrain. To stuff everything into a 3/8″ tall space, I had to build custom gear drives and modify the motors. While a stock solution such as Sanyo Micromotors do fit in the space, they were far more expensive than what I had already. The “frankenmotors” worked great in testing, but over extended operation, they began to gunk up. The square slot car motors themselves are already rather low quality and have widely varying no-load RPMs. This translated to different load characteristics. Throw in some manufacturing tolerances on my gear drives and I had a stochastic drivetrain.

To make matters even worse, I quite literally had no control over the bot’s direction due to the total lack of radio reception. If the weapon was running, then the bot would randomly interpret its own noise as signal and randomly drive around.Â  The GWS park flyer receivers have almost no filtering and seem to accept used toilet paper and old batteries as valid.

At the event, PQ had all of 1 match, lasting about 10 seconds. The single hit blew apart the momentary button switch that was the bot’s master power switch. In the battle royaly, PQ was able to land a few hits before pinging itselff off a wall and out of the arena.

All 20 seconds of Pop Quiz’s matches are here.

PQ wasn’t in the arena much at all, so I only got one picture of its work. 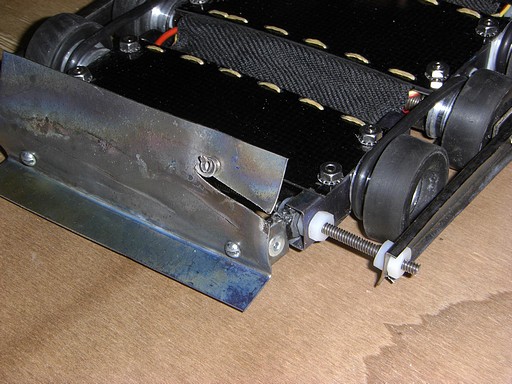 Pop Quiz goughes in the titanium plow of Segs, a rather innovative 8WD “flexible” bot. This same impact flipped PQ over and also destroyed the power switch.

Pop Quiz was a great trial in how flat I could build something, but returning to the previous chassis outline would benefit the practicality greatly. I can use real drive motors, have more space for batteries, and use a larger weapon motor. PQ1 had a strong drivetrain but weak weapon, and PQ2 had a strong weapon with a spotty drivetrain. It would be beneficial to combine the two traits, but like Ãœberclocker, there is no scheduled rebuild for Pop Quiz at the moment.

NK5 was a two-week speedbuild that only happened because I discovered the magic of waterjet-cutting 2D parts and assembling them like 3D puzzles. We’d been doing this in the lab for a while, but I never gave it a shot myself – that is, until Big Blue Saw ran a free part sale. It all started when I tried to stuff the redesigned frame onto a 9 x 9″ square of aluminum. While the complexity of the frame put it over the “freeness threshold”, I couldn’t resist but fab it anyway. The rest of the bot followed.

The best part about this bot was the new bladehub motor. Previously, NK used a friction drive between the blade and the weapon motor. This was spottily reliable and also required constant adjustment. With my experimentation in hub motors over the past year, I decided to build a high-speed fully self-contained disc motor just for driving the weapon. Backed by the power of lithium batteries, the spinup time to “vibradrive” was under 2 seconds. I also never hit full speed with this weapon because the bot would begin to move around the floor powered by its own vibrations.

The new disc was lighter in profile but heavier overall, being made of steel instead of titanium. The tips were heat treated to avoid blunting, and this worked well. In the Battle Royale, the disc warped at the nonhardened points after the bot faceplanted into the steel arena bumper rail at full speed. Better than just shattering, I suppose. After the second match, the disc motor threw a magnet and was dragging it across the stator for the rest of the tournament. This gave it massive starting issues, but after everything got up to speed, the weapon still worked.

The combination of NK4’s fast, balanced drivetrain and this version’s weapon meant that NK was a great performer. It fought four opponents to capture the D*C 2008 Beetleweight championship. The caliber of the Atlanta bots is really rising fast… I’m sure next year will be even more action-packed. All of NK’s matches are here.

NK took moderate damage to the weapon system during the tournament and would require a rebuild of the motor. Since everything else pretty much works, I will probably run it at Motorama ’09 or a local event. 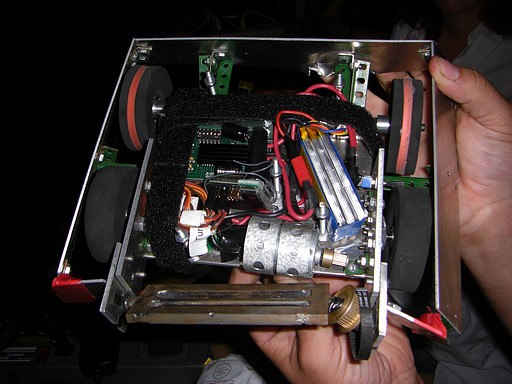 NK does a number on Drumbeat. The gouges on the back side are a bit bigger. 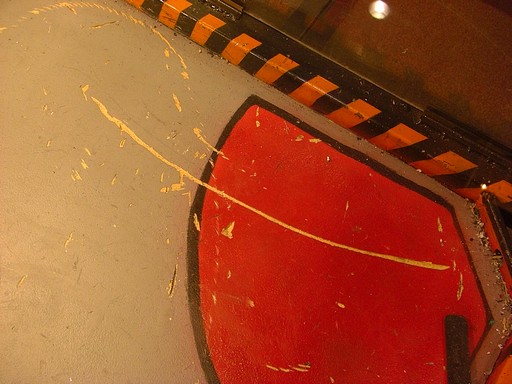 A long skitter mark from when NK was inverted and balanced rather interestingly on its weapon.

So there it is. There’s something I want to change for future events, and that is actually being prepared. It used to be that the bots were really simple and I would have finished building weeks before the event and spent the rest of the time messing around and practicing. With added time constraints and the complete destruction of any time management ability I might have had, this is becoming more difficult. I’ll have to hold myself to the rule that if the bot isn’t finished and tested, I won’t attend the event. The fuss of having to deal with broken subsystems at the event is one whose ultimate cost is the fun factor in attending. All that results is frustration.

I was so busy with Ãœberclocker at DC ’08 that I took practically no pictures or had any time to just sit and watch the event. That’s not a very good attitude to approach the events with, especially one as laid back as D*C.