It has been sitting in the same spot since mid-July.

After July, I realized that not a single one of the summe bots was moving yet. So, since Dragon*Con was sort of a Big Deal to me, I decided to drop the kart efforts for the summer.Â  With the robots having epicly failed at D*C, I tried to pick up the effort again when I returned for the start of fall term.

Tried. Either I have been horrible at working efficiently or the days seem to be getting shorter, but I wasn’t able to make any progress for a while. New obligations, the increased workload of higher level classes, and Semi-Discretionary Time-Spending have kept me mostly away from MITERS.

The bottom line is that LOLriokart is still not on all 4 wheels. It is getting closer, however. Here’s the build update, starting all the way back in September. 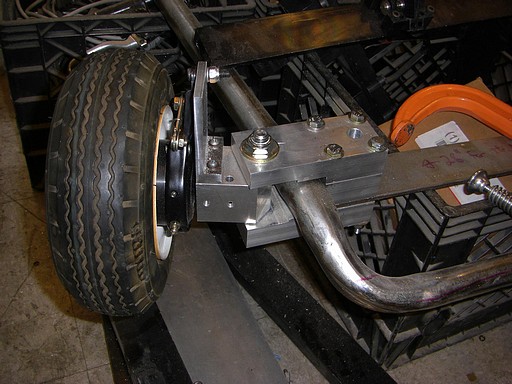 The clamp has finally been removed. New, shiny, properly-sized hardware has replaced the clamps and random found screws. Also visible is the reaction arm for the brake, which is actually more of a reaction slab. 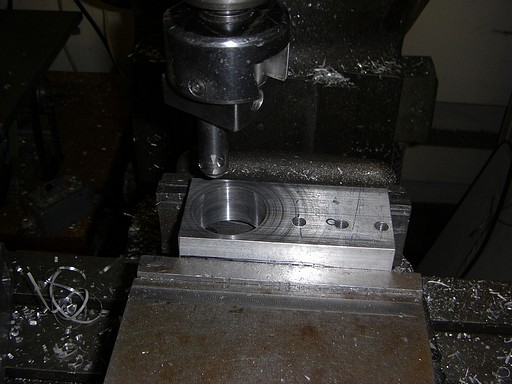 Now moving onto the back end. This is the start of one of the rear axle bearing carriers. There are two on each side, an inner and an outer. 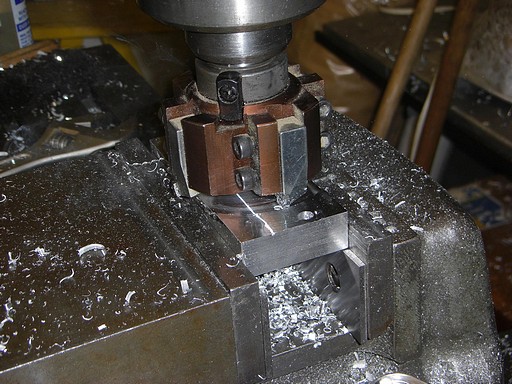 Know what’s really awesome? Obnoxiously large milling tools. I planed across the barstock in one pass with this thing, which seems like a cross between a fly cutter and an indexable carbide mill. 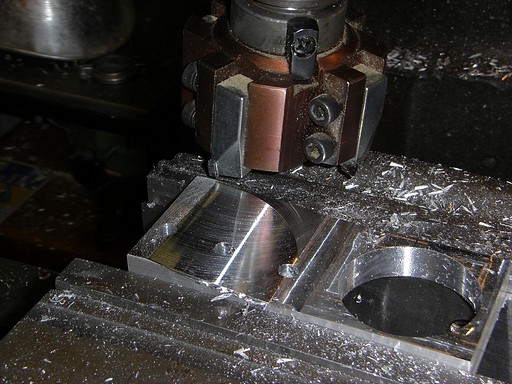 One advantage of having an enourmous cutter is the ability to make angled parts in one pass without fiddling with trigonometry and multiple axis displacements. Here, I’m making a 5.5 degree slope on one of the carriers. 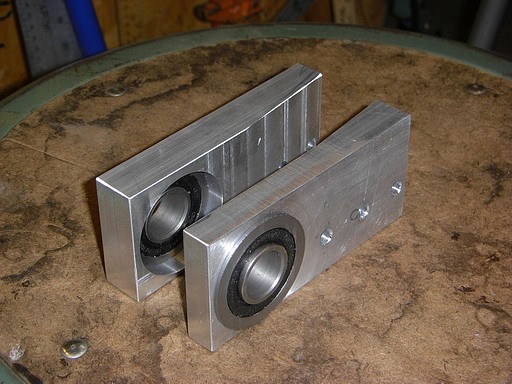 Both bearing carriers. These are both for the right side of the kart. The convex one is the inside and the concave the outside, which the wheel will rest against. 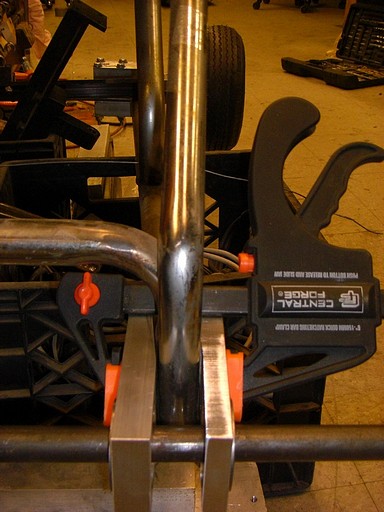 Wait, so, why do they need angles? Shopping carts are narrower in the front than they are in the back. To avoid having an obscene toe angle (and to actually have the ability to drive both wheels with one axle) , I needed to account for this angle. I determined the angle at about 5.5 degrees with a bit of straightedge trickery. 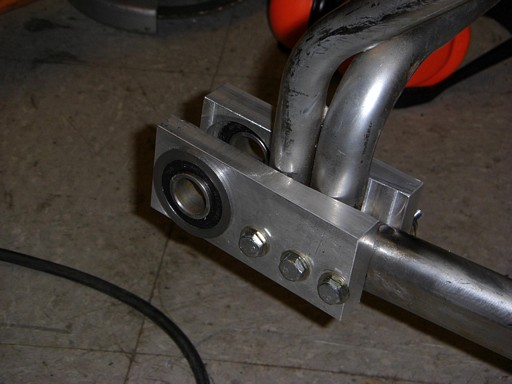 All mounted. I drilled holes through the steel tubing such that I could use bolts to squish the entire assembly together. The bottom caster fork had to be cut off and its former mounting point ground flush with the frame first.

“Drilling holes” was much more difficult than it sounds. Since I was technically drilling at an angle, and with a hand drill, it was hard to aim straight through, and I ended up having to enlarge all the holes anyway. Oh well – noncritical dimension. 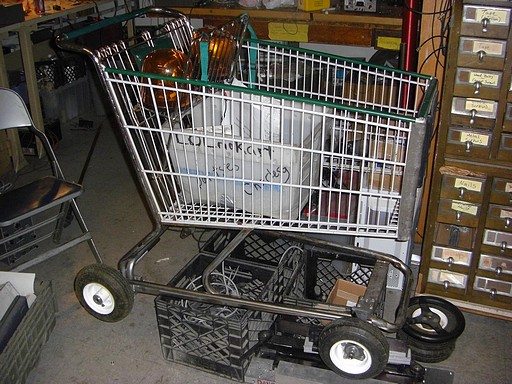 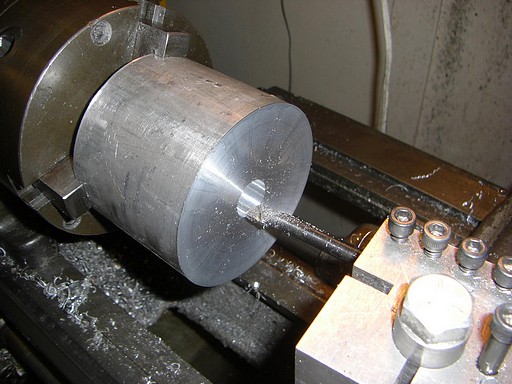 So let’s continue on the back end. I hung this 3.5″ round of aluminum precariously off the end of the chuck in order to carve a drive hub from it. I decided to first bore the axle hole. 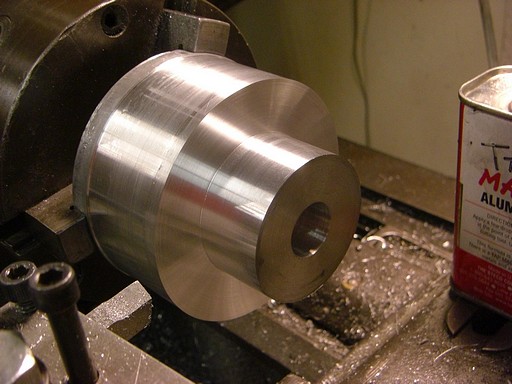 Basic form of the hub emerges from the end of the raw stock. Next was the parting operation, which took no less than 15 minutes, three setup explosions, and an eighth can of Tap Magic Aluminum.

Thus are the perks of having a very old, loose machine and a not-very-stiff tool holding solution working on a hugely huge part. At least the Tap Magic made the space smell pretty. 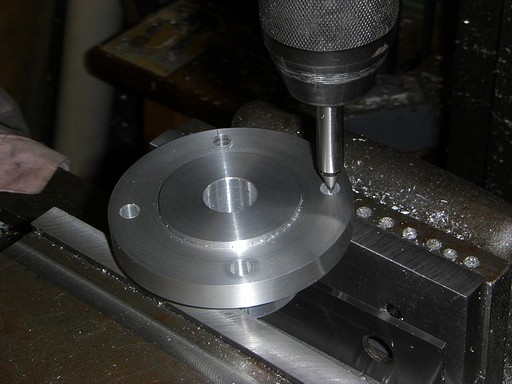 Drilling the bolt circle After I drilled the holes, I realized that the flange was too close to the vise jaws to powertap the holes. I had to remove this setup and elevate the hub with taller parallels.

Of course, doing this made me lose my X-Y position as well as the angular positions of the holes (I didn’t mill any sort of indexing flat beforehand). So, to tap the holes, I had to find their centers individually. 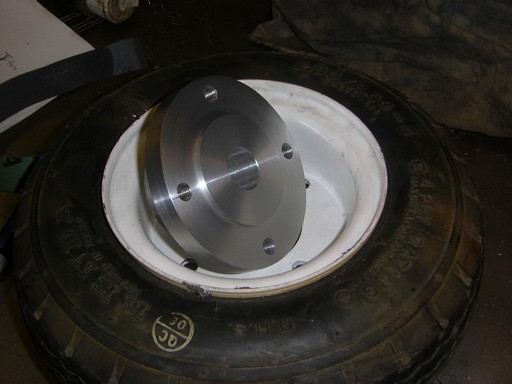 And the mostly finished product. I still lack a power transmission solution for the hub, however – what to do in this case?Â  My first gut reaction was Enormous Set Screws in the hub, and milled flats on the shaft. But do I *REALLY* want to hold my wheels on with set screws? Should I end-tap the shaft, machine a collar for it, then squish the hub mandrel-style onto it? No, I don’t want an integrated sketch-clutch (sklutch?). The axle is 3/4″ and keyed, so broaching is one option. I have no broach kit, but the student machine shops probably do.

Since I only got a very short section of aluminum, I have to dig another one up to make the other drive hub. How long will that take, I wonder… until next Spring? We’ll see.