The lesson learned this time:

No matter how good of an idea you think it is to use sketchy $2.50 surplus drive motors, IT ISN’T. There’s a reason they’re on the surplus channel AND really cheap, it’s because they suck.

Anyways, here’s the pretty picture of the robot that I promised. What better backdrop for angry \m/echanical \m/ayhem is there than a flower garden? 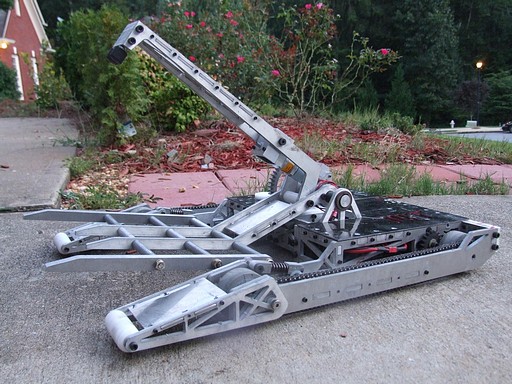 I brought with me some assorted lighting products to comply with the power indicator requirement. So, some blue LEDs and resistors later, the bot had a “body glow”. 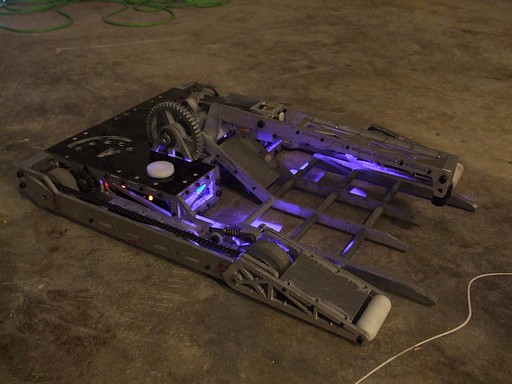 The emission of the LEDs is captured well by the camera. It’s actually much bluer in person.

After a last overview to add threadlocker on screws that were finger-tight for testing, I threw the robot and associated equipment back into the crate and hauled off to the event.

I ended up not bringing any insect bots this year, so there’s no bot report on the Sunday ants and beetles tournament, but I did take some pictures. 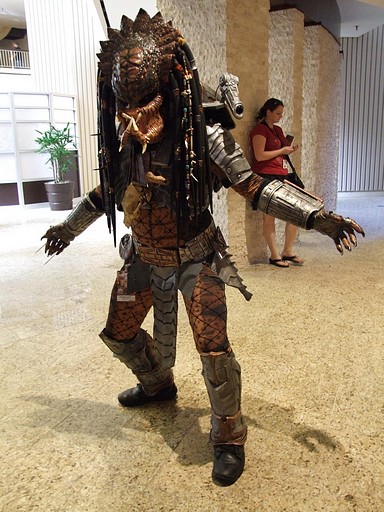 The most eclectic collection of comic book heroes, SciFi characters, anime schoolgirls,  ambiguously-gendered deviants in locally popular indie bands, and much much more, in the universe. This guy worked two years on a painstakingly accurate interpretation of… a character I have not heard of in a show I have not watched. 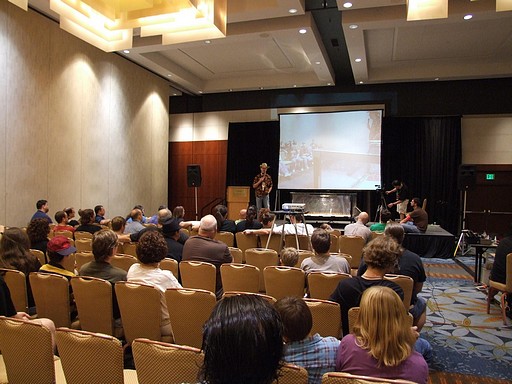 In the middle of all this, somehow, is robots. I am satisfied.

Here’s the “Microbattles” event on Sunday, which features full enclosed-arena combat with 1lb and 3lb bots. 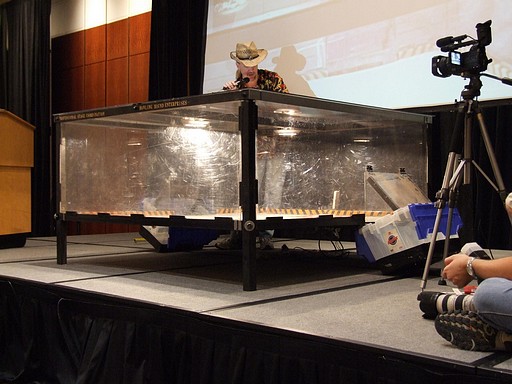 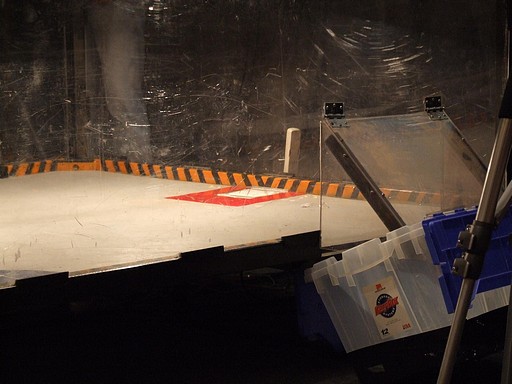 After the last arena hazard exploded off in a violent expulsion of wheel chunks, plastic shavings, and angle grinder gears, it was determined by the community at large that robots should be less amenable to destruction via the hazard, and that the hazard should be designed more for… well, fucking around with the match.

So the new arena hazard is a solenoid-driven flipping ramp that is weight-sensitive. On average, when it is functional (i.e. the latch isn’t jammed), it will pitch a 1 pound robot a few inches up and two or three feet over.

My suggestion of a powered turntable was turned down. 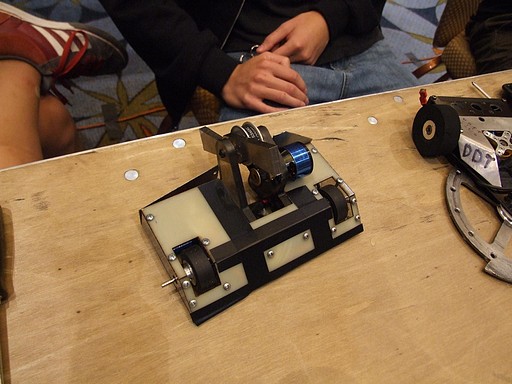 Robots at the event ranged from the compact, durable, and elegant, to… 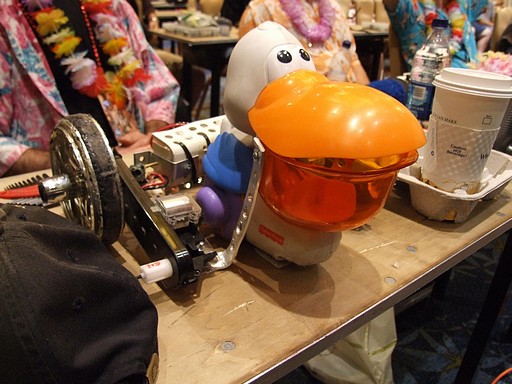 Yeah, about them robots. 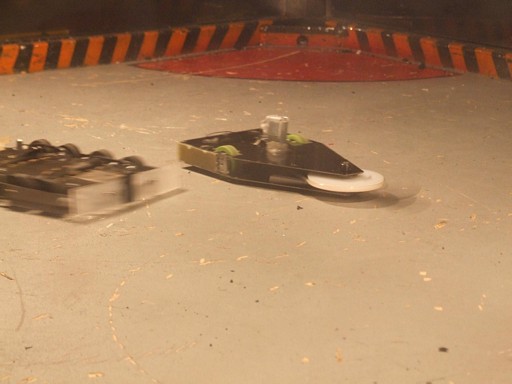 Here’s a picture of robots (Segs and Pwnsauce). Fighting. Like on Battlebots. 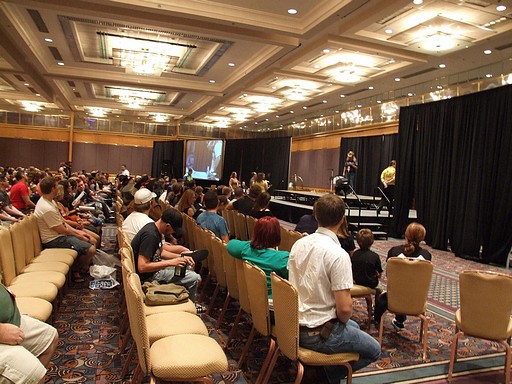 The main event is a highlight during the Monday of the con, which is when things are always ending or wrapping up. It’s an open stage sumo-type event where big spinny things are not allowed due to the peculiar fact that the arena wall is the audience.

No, not really. But they still don’t allow spinners, flails and chains, or other surfaces that could conceivably travel at more than 20 feet per second, the prescribed speed limit. 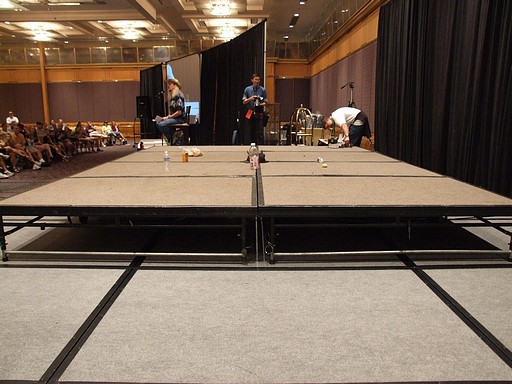 The combat stage in question. Always the shittiest, most beaten up, and uneven stage risers that the hotel has, and usually recycled from the previous year (and beyond!), then littered with audience-sourced stage hazards to make life more interesting.

This year, we have objects as diverse as to run the gamut from shoes to donut boxes. 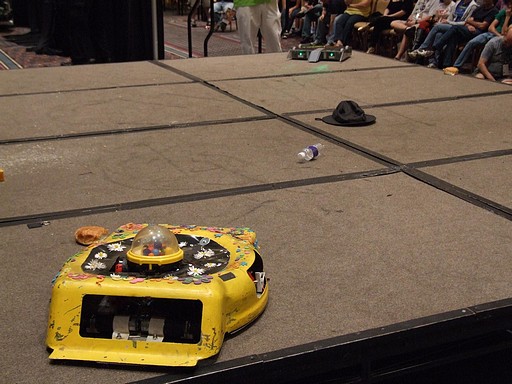 So about that whole robot fightin’ thing…

Bots at D*C tend to be less SRS BIZNESS,  if the brightly painted lawn mower shell with a popcorn toy on top doesn’t tell you already, than the more professional league events due to the fact that there’s nothing really to win besides glory and a plaque…. and the hearts of nearly a thousand audience members at any one time. The event average 80% seats full and approached standing room only at the end. Coming from a harder combat background, I’m slightly jaded, but the average Stormtrooper finds this very amusing. 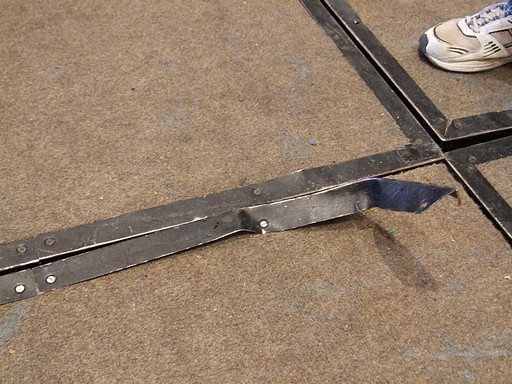 Usually, big steel bars are bolted into the stage riser surface to perform one of several functions. They act as more floor hazards to discourage plain box and wedge designs which, while effective, are boring as hell.

They also, as was discovered at this event, keep the risers together. A few good shoves from flying 30 pounds robots and inches-wide seams would open up in the floor because the risers would physically move from the impract.

Floor-scraping wedges have a hard time navigating to begin with, but fast ones begin tearing up the stage surface. A few seams and edges had to be cut off, hammered, or re-screwed as the event progressed. 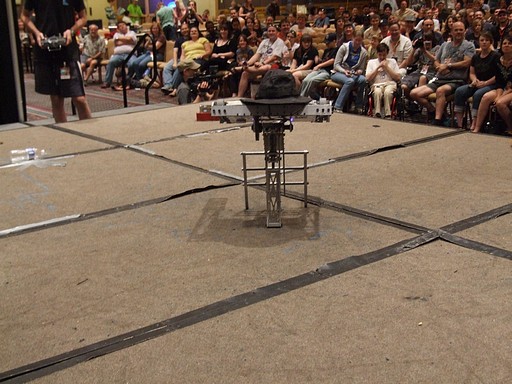 Okay, so that’s totally and utterly staged, but for good reason. I actually played most of the tournament with either one function drive side (the left one) or none at all.

Why? Because my sketchy-ass $2.50 surplus drive motors let out the smoke like nothing else I have ever seen.

I actually lost one of them before matches even started. During some test driving on the stage, the right side motor ceased functioning. By that, I mean if you try to power it, huge sparks shoot out from the brush end. Not smooth for robot work.

Knowing the bot wasn’t going to win at that point, I sort of just tossed it in the tournament for grins and chuckles™. This involved starting in increasingly absurd positions as the matches went on – it was a round robin tournament, so I had plenty of time for showmanship.

The reason for the failure is still unknown, but there was no way the bot would move at all with one motor dragging on the right side. So I took it out – leaving only the gearbox to add a very minimal amount of drag, so the robot would tend to curve in a wide right cirle.

The last minute hack that saved me to some degree was turning Überclocker into an elaborate cheap R/C car. You know, those things which go forward, but then turn in one direction when they reverse. 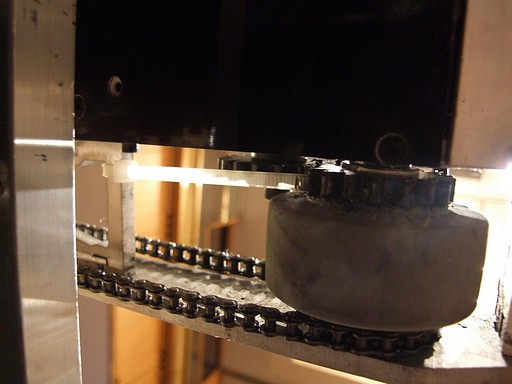 The magically-multipurposed zip tie comes to save the day. When the robot rolls forward, the gears bump the cut wire tie out of the way, and the robot moves without restriction.

However, when the robot attempts to reverse, the zip tie gets sucked into the gear teeth, jamming the wheels. As a result, the robot swings a left turn about the rear right wheel.

It was a very limited form of maneuverability that opponents were about to take advantage of, but hey.

See it working in the highlight video!!

You know what… for once, I’m actually satisfied with the robot. The failure this time was not something conceptual or something I had to fabricate. The fork and clamp worked extremely well when I could capture opponents, and the robot actually did not faceplant on a lift attempt. The torque limiting solution for the gearbox also worked excellently.

The only thing I need to do is not go “ooh, cheap and shiny” as much…especially on something as pivotal as drive motors.

Überclocker will probably compete in regional Sportsman 30lb class events and will return to Dragon Con next year. In the mean time, I have a year to perform upgrades and rebuild the insect bots that I neglected this time.