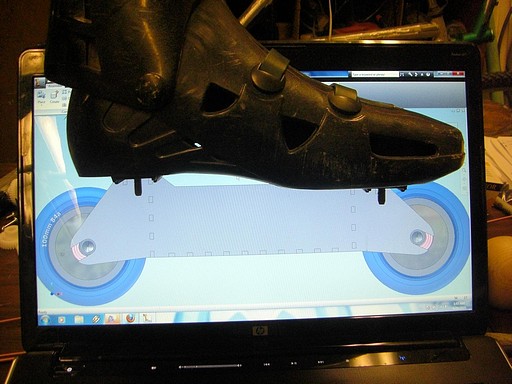 … or not. But this most excellent screenshot gives an idea of what the final product should look like – hopefully a little more 3-dimensional.

I’ve decided to condense the research and development that I have completed so far about small hub motors, refine it, and present it at this year’s de Florez Award Competition, hosted by the MechE department. The theme will be personal electric vehicle (PEV) propulsion and DIY conversion. Thus, my sudden attention to the Deathblades. While it’s unlikely I’ll have a whole power unit running by next week (and this is certainly better for my health), I at least want one on static display.

Anyway, you can’t have a Deathblade without hub motors. I decided to use the slightly scaled RazEr motor design because I already “knew” how to make one. The whole “can change a tire without taking apart the whole motor” feature is also desirable. Before starting, however, I went and simplified the design even further by changing the way the wire exits the motor. 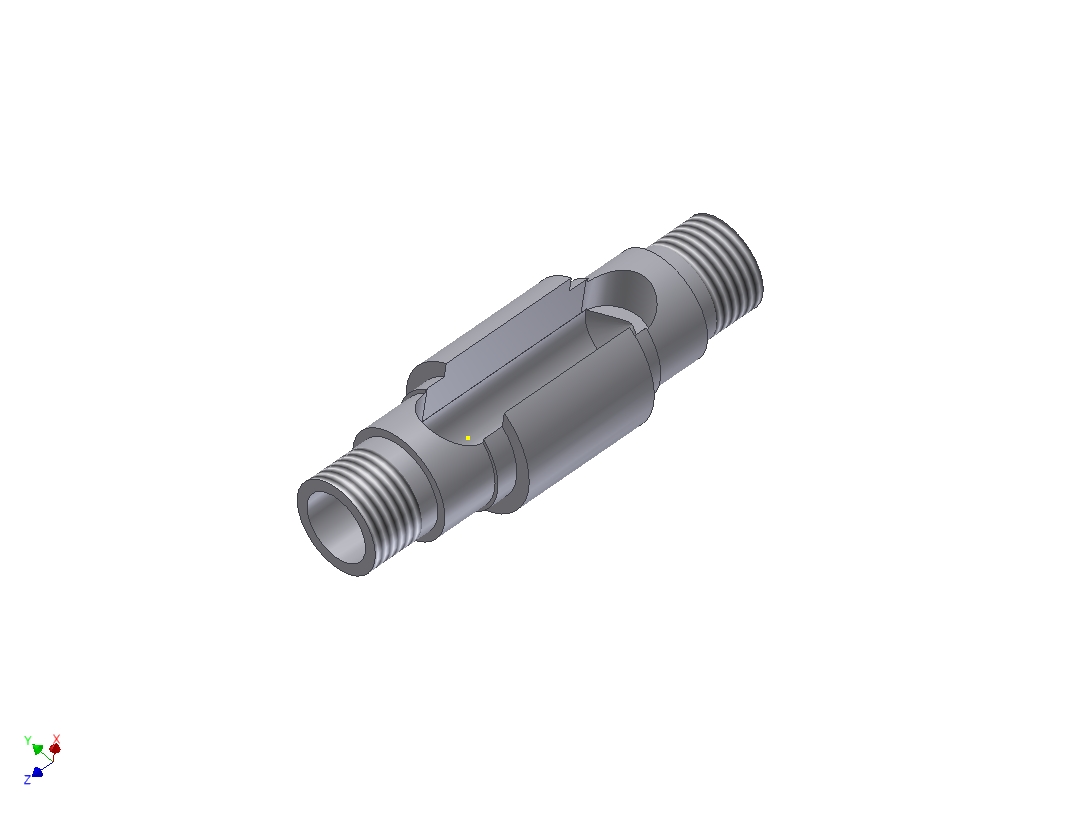 The previous shaft involved drilling holes at an angle to pass the wires out. While this would be a better arrangement from a strain relief perspective, I didn’t want to have to put up with yet another machine setup. So the design was reduced to a slot meeting an axially drilled hole.

This is actually a design that I wanted to try on RazEr when I have to replace the existing motor, but it seems the Deathblades will get it first.

I ordered the material for these motors about a month ago, and they have been sitting on the stuff pile since then. Likeall my motors, I start with a giant steel pipe and cut it down to bite-sized chunks. 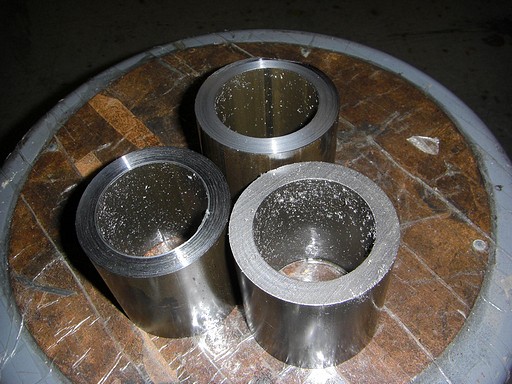 The pipe had to have an OD greater than the largest motor OD, which was the fixed wheel retaining flange, and also a bore smaller than the magnet ring design diameter. I chose 2.75″ OD x 2″ ID tubing – that’s a solid 3/8″ wall. Clearly not all of it will be used… 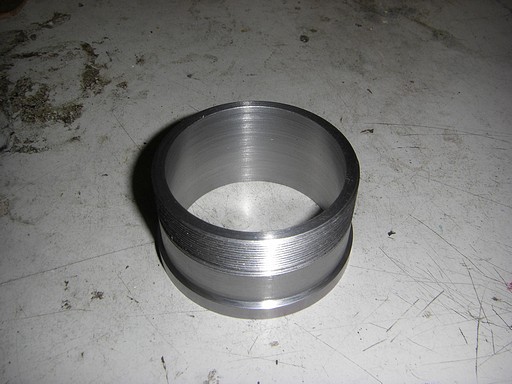 Here’s the protoform magnet ring/outer case. Protoform because it does not yet have holes drilled for the removable side plate. There are plenty of pictures of me building wheelmotors on the site already, so I’ll skip the cut-by-cut commentary for now.

I elected to beat the steel into submission using the meatiest lathe in my general vicinity at the time, which was the auto shop’s machine. I believe it’s a Rivett 1030. Either way, huge meaty tools means huge meaty cuts, and this let me pop off a can in about an hour.

A modern production CNC lathe could probably knock one out in under 30 seconds. 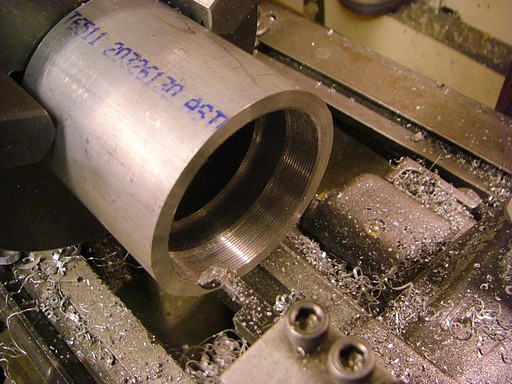 Moving onto the threaded ring of wheel retaining (+1). I decided to be smart for once and ordered aluminum tube so I didn’t have to cut a big dish out from solid, then thread while risking crashing the tool into the bottom.

I went back to MITERS to do the threading part because the Old Mercedes, while a bit shaky for heavy metal removal, was more responsive and gave me better feedback for the sensitive threading operation.

I single-point machined the 2.5″-24 GYF threads using my cheesy internal threading tool. I’m getting pretty quick at it after discovering that it’s faster to reverse the machine to back the threading index up, than to wait for it to be driven all the way around again… 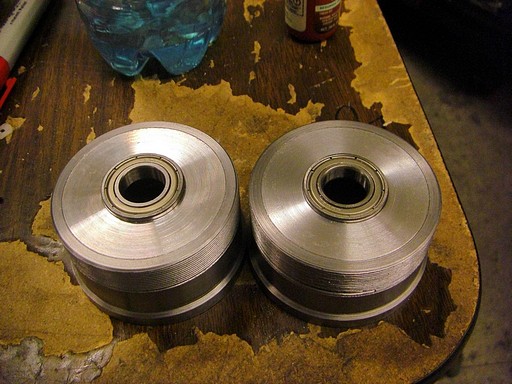 Well, two. The permanent side plates have already been installed in this picture. I’ve also fit the bearings in. They are the same 6902 type 15mm bore bearings I use on RazEr. I’ve moved away from the 6802s because of their stunning lack of curbhop durability. 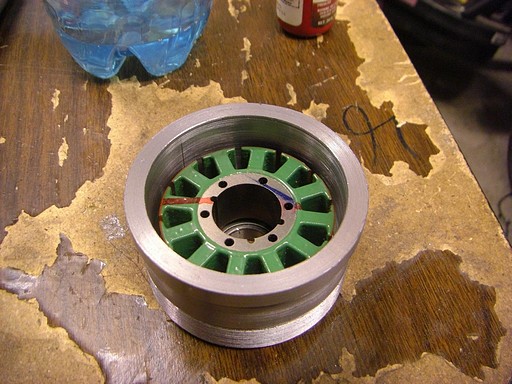 I dropped a stator in for fun to see how things were fitting. At least the stator fits inside – this tells me I didn’t do too badly, right?

The removable side plate will wait until I install magnets in each rotor. Usually, some aspect of manufacturing means that the magnets sit a little higher or are a little thicker than I had anticipated – RazEr’s motor needed two trips back to the shop to actually seat properly inside the can rim. 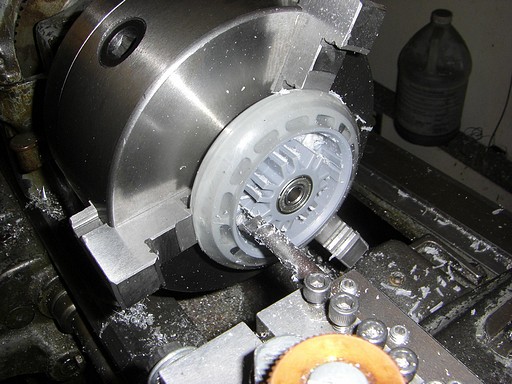 While the Loctite was hardening, I cored out a 98mm Razor scooter wheel. The Deathblades will run 98mm wheels, which are about the largest found on common road skates. Motor torque scales with stator volume, so smaller wheels would mean even even even less torque. 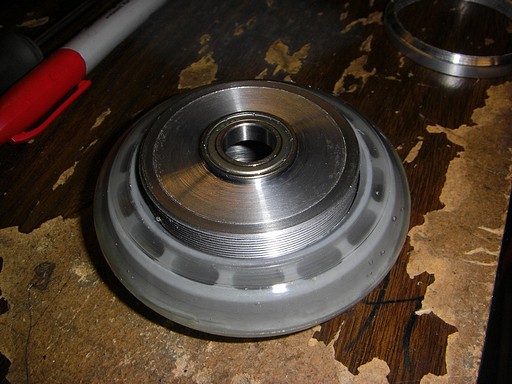 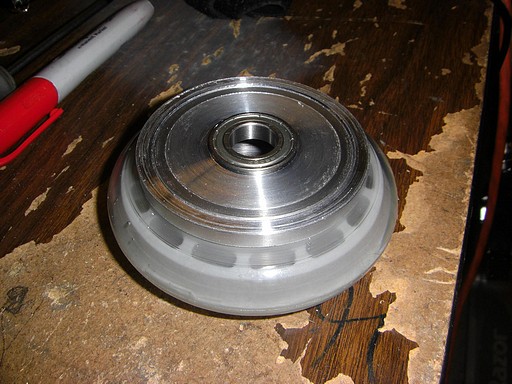 …and with the threaded ring of wheel retaining installed. I have yet to drill the spanner wrench holes, and might just get lazy and Loctite the whole thing again.

But, that would be unprofessional.

One thought on “Deathblades: A Little Bit of Motor Work”