In the last episode, our heroes were…

… wait, wrong show. Anyways, I said I’d decide between TIG welding and using zinc–aluminum brazing alloy on the frame. I’ve decided to go out on the proverbial limb and put together the entire robot frame using said brazing alloy, due to the fact that getting the MITERS TIG unit up and running in a timely fashion is now impractical.

While other TIG welders exist on campus, I also don’t feel like fucking up someone elses’ machine trying to weld aluminum, something which I have only done on accident with large batteries, and only once with a TIG torch. That was more making a molten puddle of metal than anything else.

I want to investigate how legitimate the alloys are. They’re usually advertised as STRONGER THAN MILD STEEL!!!! or STRONGER THAN THE PARENT METAL!!!! which smell of marketing hype. In other words, if Cold Arbor holds together in the arena, or only falls apart under extraordinary circumstances, then I’ll probably be buying alot more of the stuff. 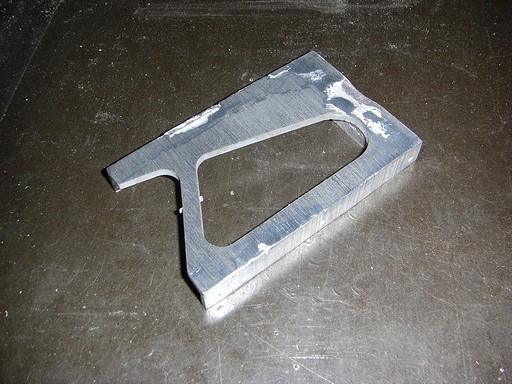 I forgot to take a “before” picture, but imagine the piece with bulging, ugly round corners where I applied the alloy. Result: Not bad for the first shot. There are areas where I didn’t fill as much as I could, and an area where I parked the torch too long – oops.

Aluminum doesn’t change colors before it liquefies, unlike steel. Instead, the surface just becomes a bit darker. Then suddenly your metal starts sagging.

Mild color differences between the 6061 plates and the 95/5 Zn/Al alloy can be seen on the corners. 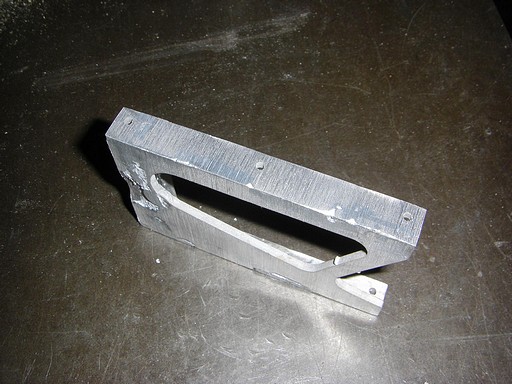 Another view. You can barely see where the tab-and-slot edges are any more, which is an indication of good fill. Before I applied the alloy, I sanded chamfers into all coincident edges such that each edge was a tiny V joint. 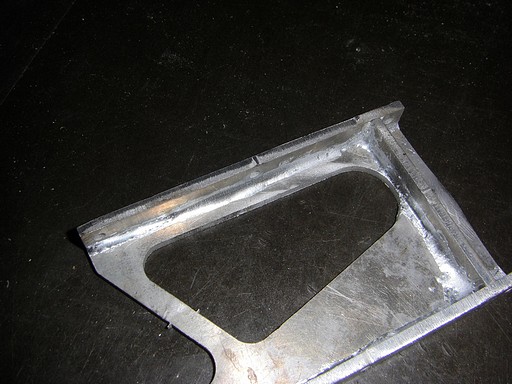 Here’s a shot of the inside edges. Inner corners are the most difficult to do properly, it seems, because you can’t get an abrasive brush into them. I only had “toothbrush” style stainless wire brushes – I’d need a “pencil” brush to get it right.

The brush is what breaks up the surface gunk on aluminum in lieu of a flux. The brazing products are all advertised as being fluxless.

In other words, you apply a large puddle to the workpiece then brush it around to wet the metal. 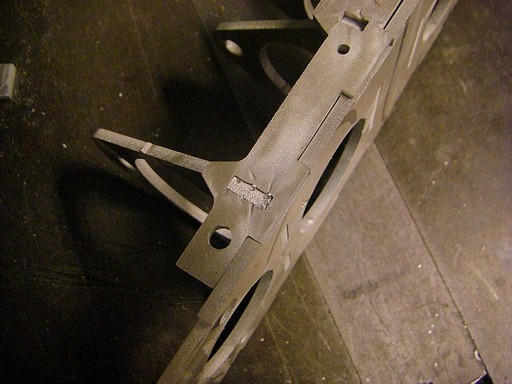 To hold these T-nutless assemblies together while I held them to the flames, I used center punch dimples to “flare” the tabs inside their slots by punching right on the seam.

This worked amazingly well. Almost to the point where I had a hard time taking the front frame rail assembly apart after discovering I put something in backwards. 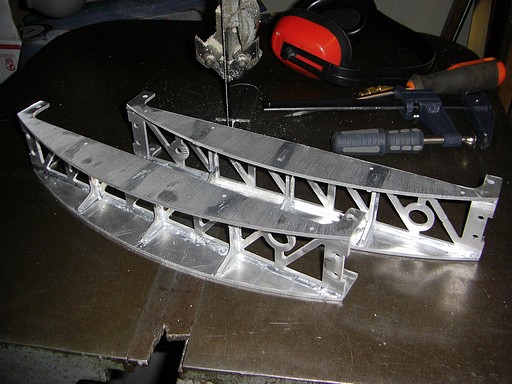 Let’s try for something BIG, like the side rails. Click the midsize image to see my unparalleled metal joinery skills up close!

And try not to vomit. The front piece is absolutely horrifying. The problem with using a very temperature-dependent process is that your whole piece practically has to be at the working temperature of the alloy in order for it to flow. Armed with only a propane bottle torch, it was hard for me to keep the alloy molten over distances greater than 3 or 4 inches. By the time I finished one fillet, the other side of the piece has already cooled below 750°F.

Those middle two sections are probably great examples for “How NOT to use Durafix” videos. I could not get in there with a brush at all, so had to resort to prodding the surface with a (melting) rod of alloy, or using a piece of frayed stainless steel aircraft cable. Neither of which worked very well. Thus, the Epic Glob. Areas which I could access with the wire brush, such as the front and back “compartments”, especially on the second piece, were successes.

I am contemplating investing in a cheap toaster oven and modifying it to sustain high temperatures. 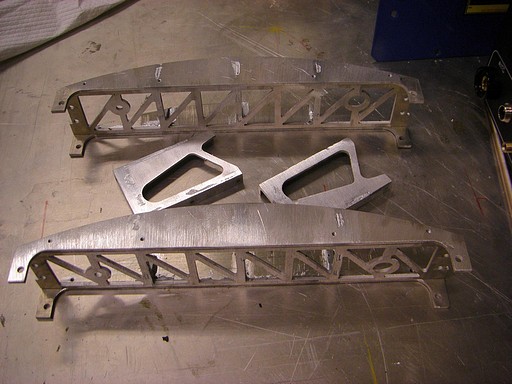 Alright, that’s enough for tonight. Both side rails and “intermediate framelets” are complete.

While the aluminum cooled off, I reverted back to working on the drivetrain. 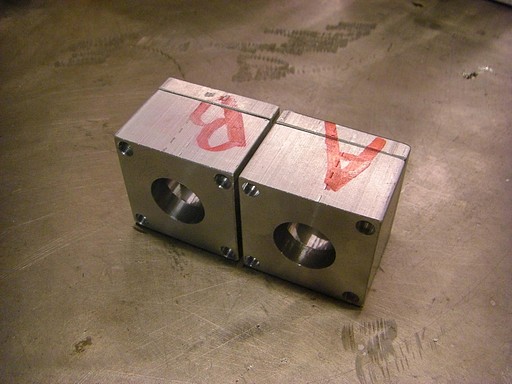 Clockerb0xen cases! They are slightly modified versions of the gearboxes used in Überclocker. They are side mounted, not face mounted. Otherwise, the dimensions are the same – two inches square and about 1.5″ thick.

The stock was roughed out and circular features machine on the lathe, and the mounting holes finished off on the mill. 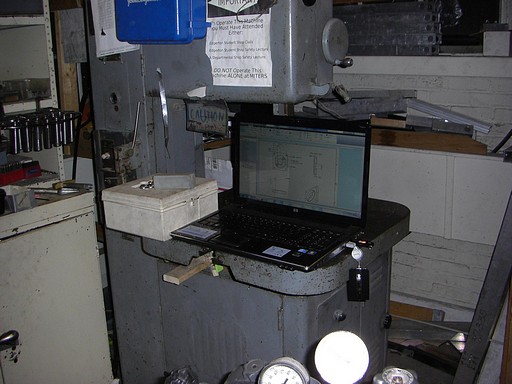 I got lazy and didn’t print any paper drawings. Instead, I just pulled up the drawing files on the screen while the machine parked on the bandsaw. It’s far enough away from the mill that I’m confident my prized mobile computing implement won’t get showered by slivers of metal.

(Nobody turn the bandsaw on, please…) 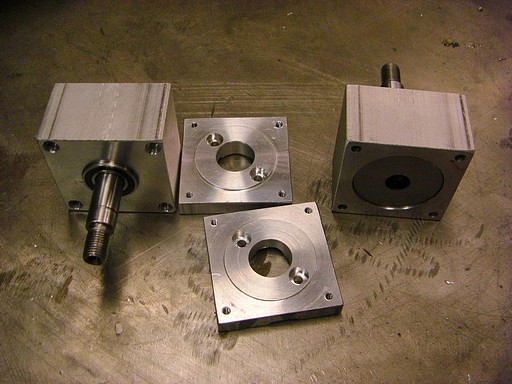 Here’s whats inside the gearboxes.

Observe the protruding bearings. This is what happens when you forget that 6901 ball bearings are in fact 6mm wide, not 5. That’s a 6801. The net result is a little bit of bearing overflow – 2mm to be precise, since I used two bearings per gearbox.

A bonehead error but it does not affect the rest of the robot. 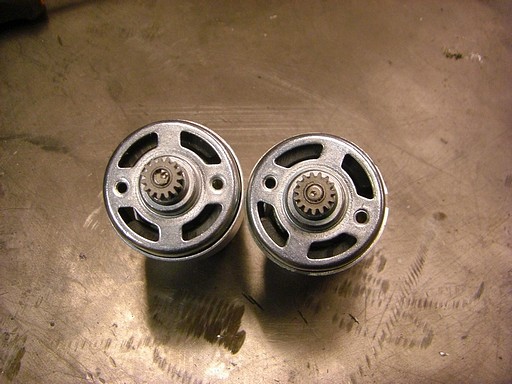 The pinions get shoved onto the 750-size drive motors.

I don’t have another set of 14.4 or 18 volt DeWalt motors kicking around, unfortunately, and they’re a bit on the expensive side to actually buy new. I’ll see how far I get with these things. 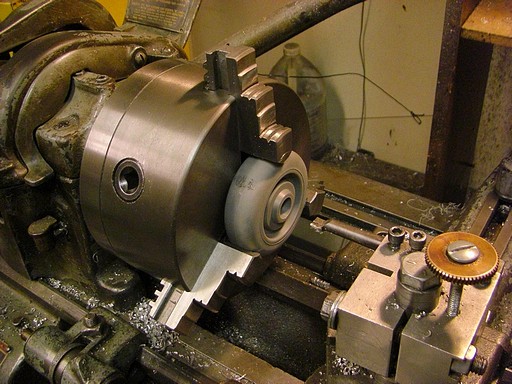 While the Loctite set on the motors, I turned my attention to the wheels. I noticed McMaster had added some “super soft” rubber wheels to their selection, with a 40A durometer tread. They were cheap, so I snagged 4 for engineering samples.

These things really are soft. Substantially softer than Colsons, and grippy like nothing else I’ve seen. With luck, Arbor will have more pushing power than Clocker.

I had to bore out the axle hole to make the wheels compatible with the robot. This was kind of a hairy operation, because all you have to fixture to is gumball-stiff rubber. 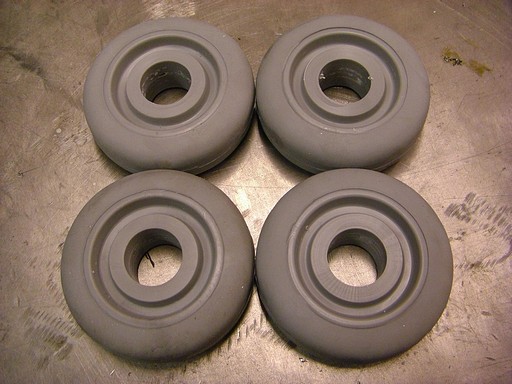 …but it all worked out in the end. The polypropylene hub machines like dense air. 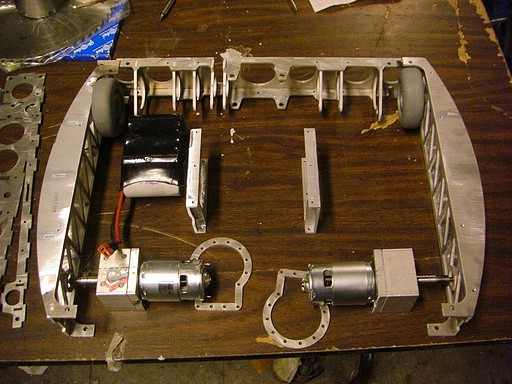 The culmination of all of the day’s effort is PRETEND-O-BOT #1!

Fine, so it’s still more of a pile of parts than anything else. To go: All the wheel hubs, some more missing frame pieces, the structure of the saw itself, all the mechanical parts of the saw, both linear actuators, and the clamp linkage.

And that’s just the mechanicals. One month.