Unlike most of my other robots, Cold Arbor doesn’t really have a cohesive manufacturing plan, mostly because I’m waiting on too many shipments. So I’m hitting the machines as components tickle my fancy – not necessarily working on the same assembly until completion.

This has led to the robot table becoming a hopelessly cluttered mess, but at least things are getting done. One month and a week to Motorama – it’s time for SRS BIDNESS.

I managed to mechanically complete Deathrunner as well as start on the drive motors and the frame. 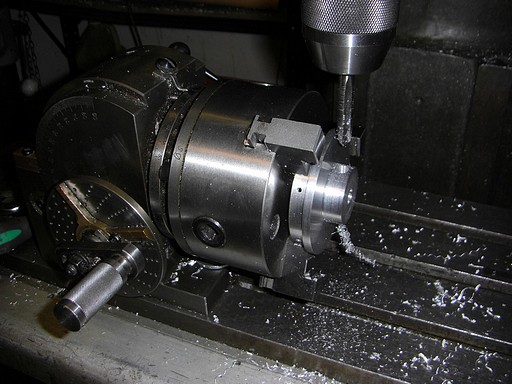 I put in the radially symmetric features of Deathrunner using my haute usinage utility, a rotary indexing head. It’s like my very own 4th axis, if I had a CNC mill where the “C” didn’t stand for “Charles”. Here’s the set screw holes on the motor hub being power-threaded. 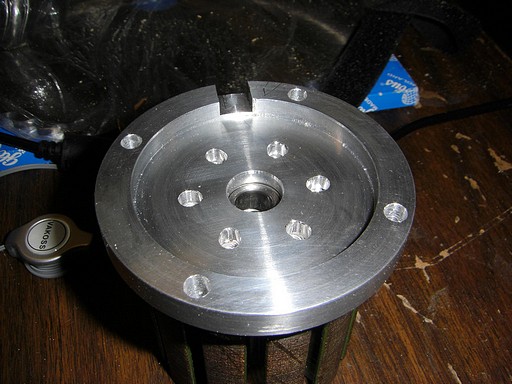 The Petri Dish of Motor Mounting (+6) has a slot cut into it in order to pass wires. How did I drill those cool elliptical holes in the center?

Unfortunately not with a rotary broach. I drilled once and discovered that I had transposed two numbers in my dimensions – 0.695 instead of 0.659.

Oops. So I went back over them with a carbide endmill. The extra-large clearance holes won’t affect stator mounting. 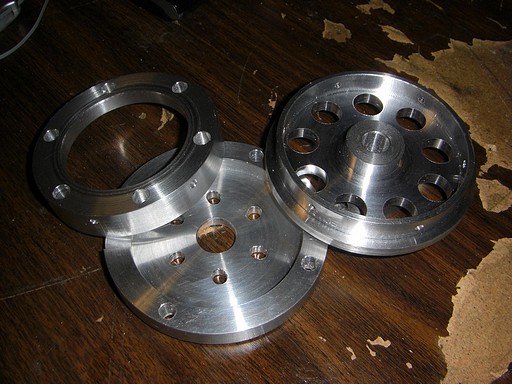 All the parts of Deathrunner are prepared. The endcap is my favorite piece of machine work so far. 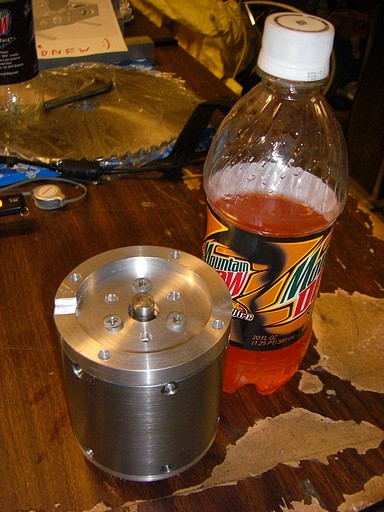 No windings yet, nor any case screws, just a proof of concept. The case runs true and everything is smooth. 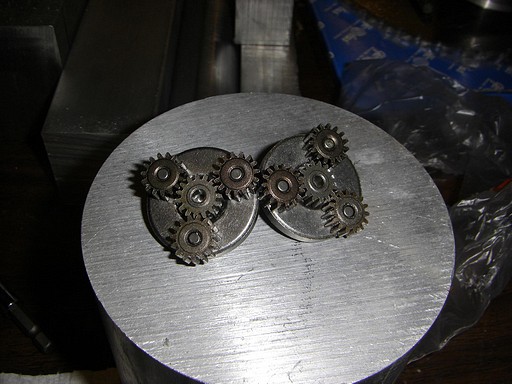 Let’s move on to the drivetrain. Remember when I said I couldn’t find any more 24:1 drills?

Reading back through old Überclocker build reports of 2008, I remembered that I had purchased two additional 24:1 geared drills for spare parts, but they were never used.

They had to be around somewhere. A bit of excavation in Überclocker’s parts box revealed the gears of that drill pretty evenly distributed across the bottom.

So here’s the spare 24:1 first stage that I’ll be incorporating into Arbor. That means the fancy  2 speed drill hack has been ditched, and I’ll just be making two more Clockerboxes. 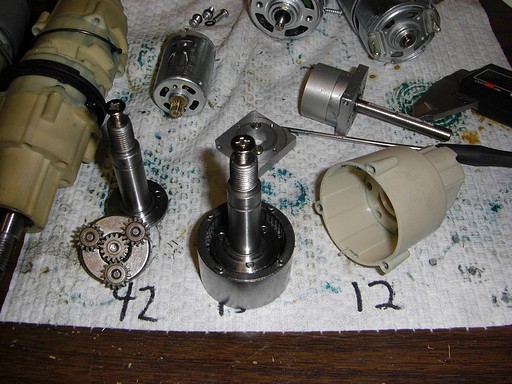 Every build report of mine seems to have at least one picture of a pile of drill parts. Here’s this one.

I began parting out the Handiworks gearboxes to use the ring gears and spindles. While I have a reserve of spare drill parts, I decided to use Handis anyway because their parts matched. There’s no guarantee that any two drills spindles I take out of the pile are actually the same size. 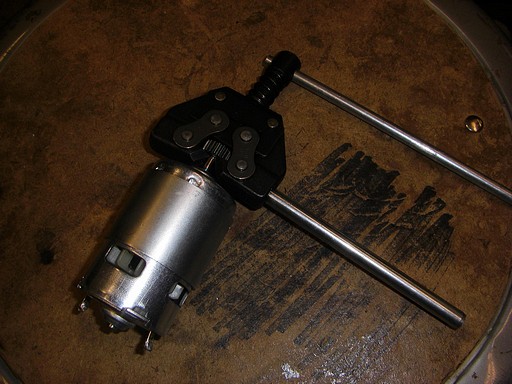 In a moment of inspiration, I used the chain tool as an improvised gear puller. This worked great for the 700 size motors that came with the Amazon drills. 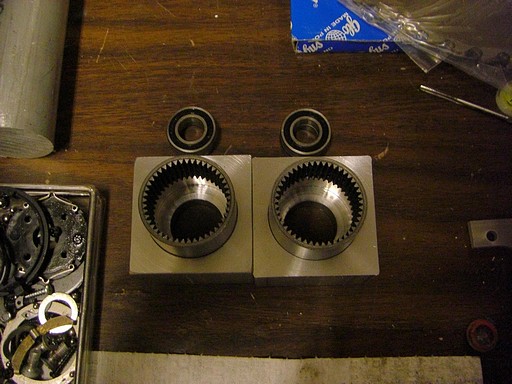 Protoforms for the gearboxen emerge. I popped these off using the Bitch Chuck and some 2″ square aluminum barstock.

The Handiworks ring gears turned out to be different sizes by a matter of thousandths – one was 1.493″ diameter, the other 1.497″. That much difference is enough to throw off a press fit, however, so I actually had to make two different parts. They are paired with their respective ring gears.

Both bearing and ring gear will be secured using the freeze-and-burn method. 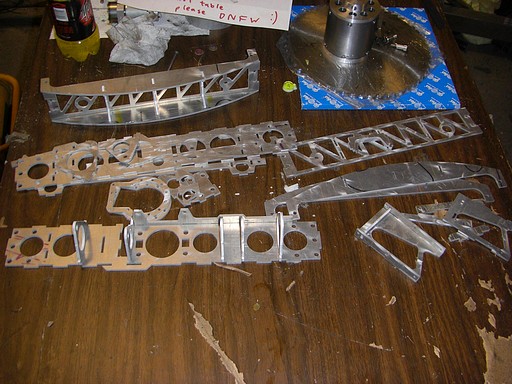 … and here we have it, Round 1 of waterjetting for the frame!

Arbor’s frame is all 1/8″ aluminum plate with selective 1/4″ reinforcements. This time, the tab and slot puzzle doesn’t have T-nuts.

I’m dead set on either zinc-aluminum brazing or real, legit TIG welding the frame together.

How am I going to TIG weld the frame? With the NEW MITERS TIG WELDER!!!!! 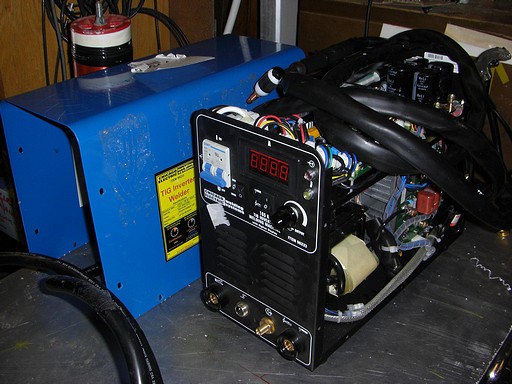 Okay, so it needs some love. As in, it needs a correctly fitting torch, a gas supply, electrodes, rods, and a 230 volt plug of a type that exists in the build space. As usual with Harbor Freight, the fittings and connections seem to be all proprietary, or extremely rare. The cheap torch we purchased turns out to use a different style of weird proprietary fitting.

Since the unit IS cheap and Chinese, I have no qualms about hard-wiring things or chopping something togethe, and that might just happen with our cheap replacement torch.

We’ll see where this goes…

2 thoughts on “Cold Arbor Update 4: This, that, and the other thing”