In the last Cold Arbor episode, I figured out that I really like giant sawblades and designed a robot around one. Since all the mechanical aspects of the design have now been hashed out, I set upon gathering parts and fabrication.

Lately I’ve been running into a bit of a bind with respect to robot drive motors. By that, I don’t mean I cut the gearbox cases too short, but I simply cannot locate appropriate components. Essentially all of my robots larger than 3 pounds have used cordless drill gearboxes in one form or another for propulsion. They’re (very) cheap, easy to work with, and relatively standardized.

The vast majority of “cheap” drills under 18 volts use 36:1 planetary gearboxes – 2 stages of 6:1. Problem is, there’s only so much power you can put through a cheap drill motor, or any motor of similar frame size, before it just explodes. For robots larger than 12 pounds, more power is needed for maneuverability than the average 550 size drill motor can safelyprovide. I ran into this problem in Überclocker and had to trade up a motor size to compensate. The issue is that the solution I used in ‘clocker is extremely difficult to find now. Typical 36:1 drill gearboxes use a 9 tooth motor pinion, which at most can take a 3mm motor shaft – the size of all 500 frame motors. But again, you can only put so much power through that 3mm press fit before the pinion vaporizes.

There exist single speed drills with 24:1 gearboxes. These use a 15 tooth motor pinion in the first stage, which can be bored out to 5mm, the shaft size of more substantial 700 frame motors and the venerable DeWalt drill motors. That’s what I did for Überclocker.

Problem? I can’t find another 24:1 drill. All of the ones I have unearthed through exploring the expanses of the Internets are now horribly expensive – $40 or more. Harbor Freight’s #66965, an alleged “900 RPM” drill, is in fact incorrectly labeled. They probably don’t know the difference anyway.

So what to do now? I continued hunting for these things by looking for clues in the description found on shopping sites. Meanwhile, I started exploring other options. I recently hacked apart a DeWalt 3 speed drill gearbox, the type used in their newer lines of power tools. DeWalt being DeWalt, it was  built rock solid. All the gearshift mating surfaces are steel! Sintered steel, but steel nontheless. Unfortunately, Cold Arbor’s design didn’t allow the use of these gearboxes because they’re too long. It would have caused the robot to be excessively wide, which adds weight. Additionally, I would have had to design a very creatively shaped housing to keep all the gears inline – the stock plastic gearcases have no easy mounting solutions, being specially designed to go in a drill body.

But examining the DeWalts got me thinking – cheap two speed cordless drill also abound on the market. These generally advertise 350RPM in low speed and 1300 to 1400 RPM in high speed, and can be had for $20-30. I decided to investigate using their gearsets, possibly locked permanently in one speed using my own housing.

My search hit paydirt (in the sense that I had to pay to get parts) when I found these widgets on Amazon for only $14.50. 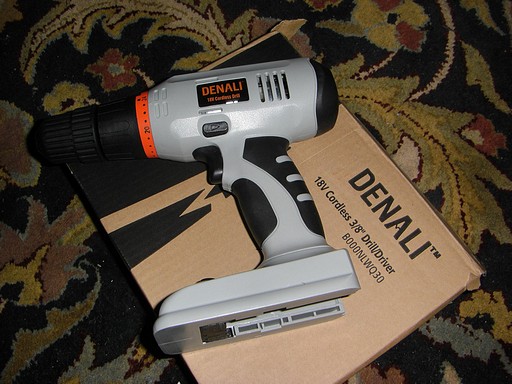 It looked like they were cleaning out inventory, since the “normal price” was advertised at $40. I immediately snagged two samples for investigation. These drills joined my table of parts, along with its other cordless brethren. 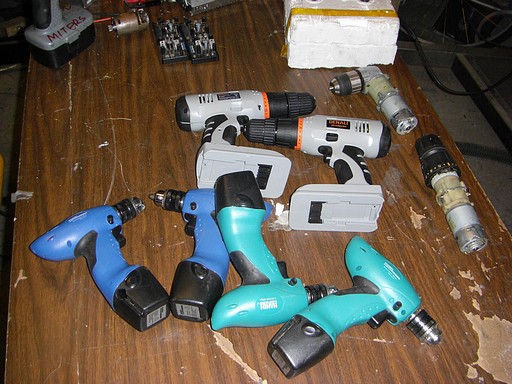 Hey, are those Handiworks? Indeed they are. I bought them way back in 2004 when WalMart had them on sale regularly for $8-10. They began disappearing around 2006, though. Handiworks were the staple drive motor of many 12lbers and the occasional 3lb bot. I excavated them from my garage back in Atlanta and brought them with me back to Boston. They won’t see use on Arbor, but who knows when I need a screwdriver motor attached to a drill gearbox? 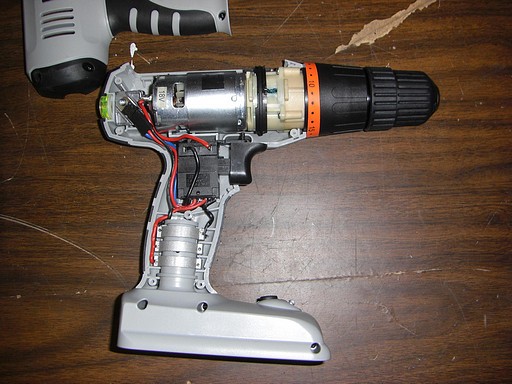 Let’s have a look inside the “Denali” drills. This thing is pretty average construction for a cheap drill, except it comes with a beefier 700 size motor. I found the crude slip rings on the battery pack receptable interesting. The 2 speed gearbox is filled to the brim with blue colored grease.

Next step is a full teardown of the gearbox. 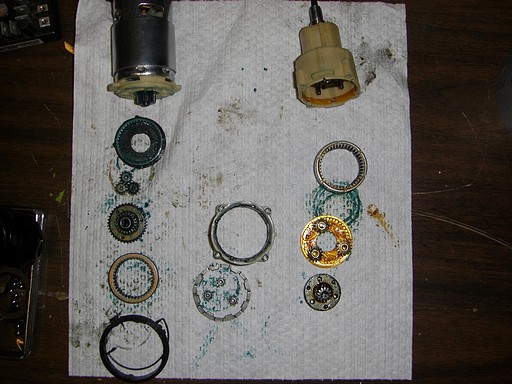 Well this doesn’t look very promising. Check out the size of those 2nd stage gears. They are 9 tooth, and wouldn’t surprise me if they are just repurposed pinions from other lines of drills. In “low” speed, all 3 sets of gears are engaged. For the record, the gear ratio for the first stage is 3.33:1, the second is 2.81:1, and the output stage is 4.5:1.

In the high speed range, the nanogears are bypassed by sliding the toothed carrier  on the left into its ring gear. This means the gearbox probably won’t last too long in low gear if used in robot duty. Small planet gears are substantially weaker. Worse, there were no parts immediately swappable with my existing stock of drill gears. In these drills, the motor pinion is 18 teeth and the ring gears either 40 or 42 teeth. So it looks like I was left with either two duds or two half-assed solutions to my mobility problem.

Naturally, I take the half-assed way out. 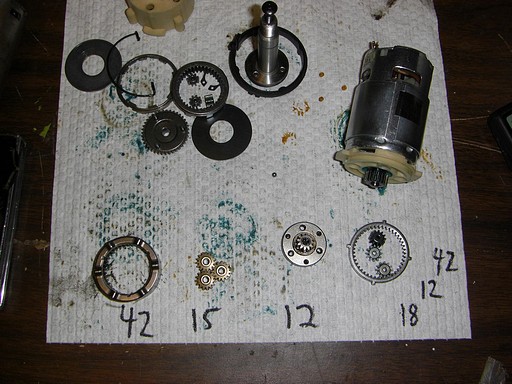 I started rearranging gears in the hopes that I can come up with a meaningful ratio using only the parts in the stock gearbox. Conveniently enough, I found that the first stage planets and ring gear could be paired with the second stage carrier. This allowed me to cut out the nanogears of the second stage completely.

The result is pictured above – a hardware-level bypass of “low” gear. The resulting ratio from this arrangement is a cool 15:1, which, while a little fast, is totally adequate for the job at hand. Using the stock drill motors, I calculated Arbor’s theoretical top speed to be 14 miles per hour. That’s fast for modern 12 to 24 foot arenas.

I am still concerned about durability of the gearbox – the pins on the carriers are only 2mm diameter, which is smaller than the usual 3mm pins found in other drills. This could ruin my day if they shear off, but for now, I’m willing to put up with the risk simply because I already dropped the money on these suckers.

Later investigations I might conduct include seeing what additional gear mates are possible with these carriers. They have a set of 3mm pin holes (but no pins) on a slightly smaller circle, which indicates that they might be able to cross-pollinate with other drills.

First up, however, is to design a casing for the “hackbox”. 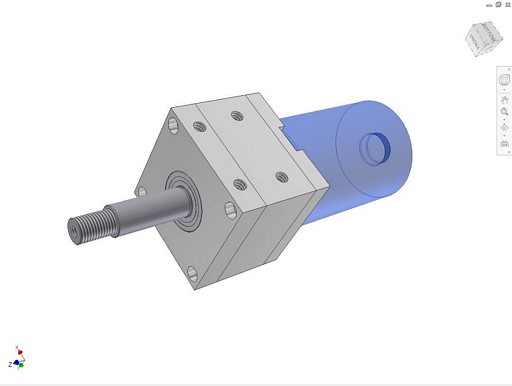 Hey, that looks sort of like the gearboxes I came up with for Überclocker. That’s because they essentially are, just slightly modified to accept the new internal arrangement. 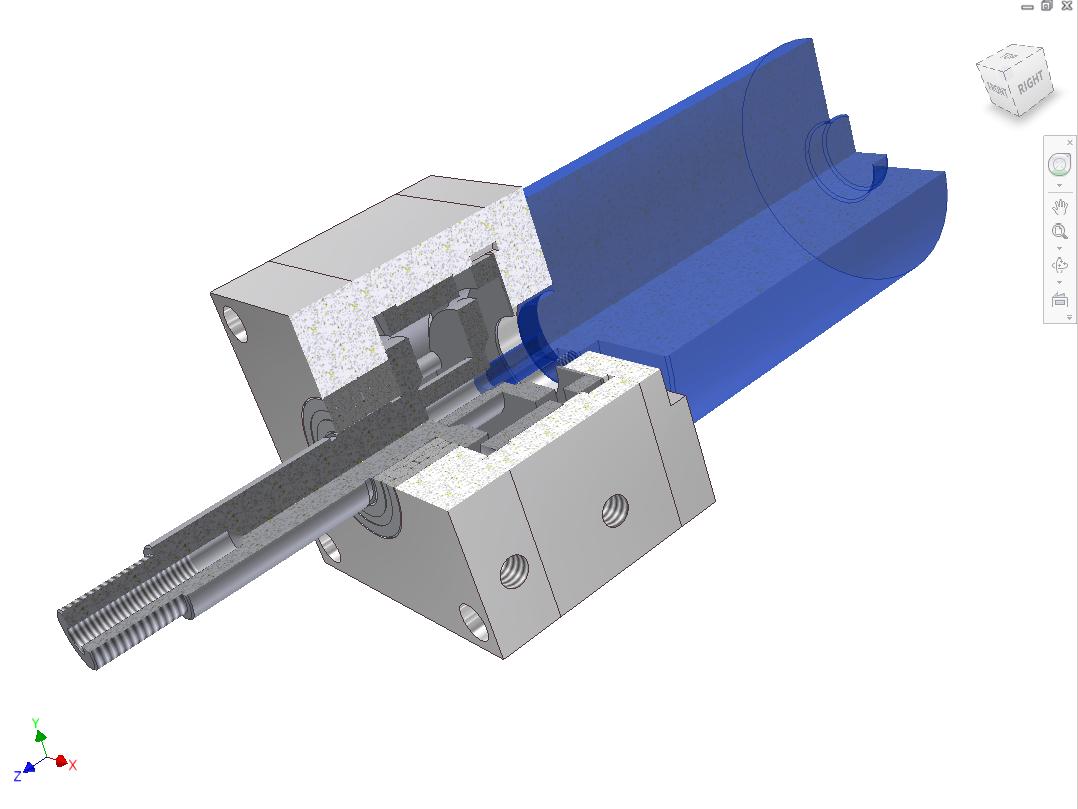 A quarter section view. I spent an afternoon taking calipers to all the relevant internal gear components and modeled the whole deal in Inventor.

The next step is manufacturing. Stay tuned for more!