It’s well known that every 3rd-generation Mitsubishi Delica produced, for any market, has the Delica Windshield Leak.  This manifests as rainy days or water from car washes/even window washing dripping into the front of the cabin floor by the outer corners, making the floors wet. Left long enough, besides amplifying your foot dank, it will rust the floors out.

But it’s a trap – the “windshield leak” isn’t a windshield leak at all. You can have the windshield replaced and resealed as many time as you dare, but it will still happen. That’s because the actual source of the leak is from a corner body panel immediately under the windshield! After learning of this condition from the delica.ca forums, I…

…waited like 3 years and did nothing in particular about it. I was leery of taking off body panels since there wasn’t a guarantee I could get them back on in due time, if at all. The ensuing “not having an indoor facility of some sort” was also a psychological damper. So on rainy days I usually stuffed some shop rags into the corners and used them as diapers. Well with the facility issue resolved, and with Mikuvan really just running too well lately, it’s time to make myself some problems again. Here I will show step by step how to remedy your Delica Windshield Leak That Isn’t Really A Windshield Leak.

I hope you hipsters in Somerville all don’t see this until it’s too late.

Not that I’m bitter or anything, but with the 3rd generation Delicas becoming more and more legal to import into the U.S., I sincerely think there are more here now than the USDM ones! I’m now outnumbered in the greater Boston area by at least 3 known-to-me and possibly more imported late 80s, early 90s 4×4 Delicas. Does this make me, in fact, the original Mitsubishi van hipster? I think it does! Anyways, before the word “Hipster” loses lexical meaning due to saturation…

Okay, first, this story begins with a national tragedy in the making. 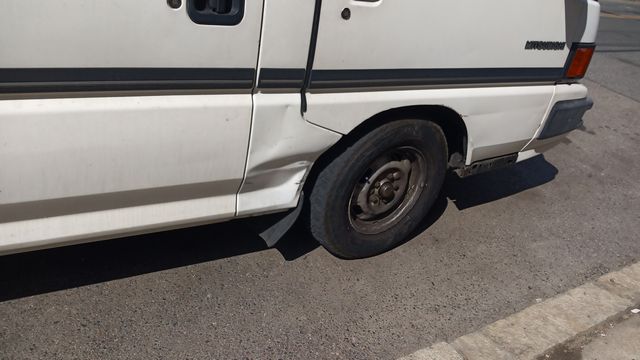 That is a dent in the side of Mikuvan which somehow missed both doors. I was going to the #NewVapeShop on a side road when, at a 2-way stop, someone just straight up rolled their stop sign into the main road. Which I was crossing at the time, of course.

It was a gentle bump, and I remember thinking to myself “Really?” before the sound of mashing plastic. And guess what! 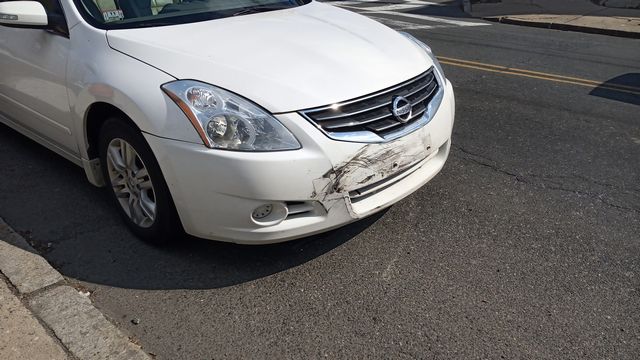 Well that makes 2 of 2 of my vans which have been attacked by Nissans in some way. Maybe if I buy a Nissan Van, they’ll go away. What the hell is it with Nissans?

I think the sheet metal damage on the side was actually solely the result of mashing the license plate holder off the front of this Altima. They more or less hit the tire/rim first (destroying one of the hubcaps) and then slid backwards some. Besides the dent, there was no other damage to anything save for the hub cap.

I’m just glad it was a gentle bump. While I generally consider myself very cautious, and try to ‘drive ahead’ instead of be reactionary, it’s a clear demonstration that some times, crashes just come out of nowhere. Apparently expecting someone to see a stop sign is too much to ask. My guess is phone, of course. Someone once said that driving a classic (or just old) car requires the same caution as riding a motorcycle; you have to anticipate the mistakes of others before they make them, because you’re not getting any protection from your own ride.

Maybe I could have staggered into that intersection a little more (I was following a loose line), or maybe……… someone can look at a stop sign. Oh well, I’ll let the paperwork elves handle this one.

Anyways, after this facepalm-worthy occurrence, I decided it was time to really give Mikuvan some attention again. The Weird Idle Problem of Vantruck had recently been resolved, so it was no longer in an awkward state of “is it REALLY running, though?”.  Now, with BIG CHUCK’S ROBOT WAREHOUSE AND AUTO BODY CENTER established, I had a place to leave unfinished work for indeterminate time periods (uh oh… so it begins). 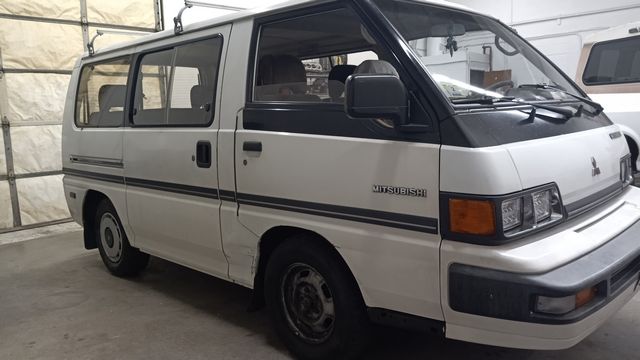 In we go! Big Chuck’s Auto Body (as I keep calling it now) is just deep enough to put Vantruck in wall to wall, with around 2 feet of clearance. Mikuvan though can just about whip a U-turn inside.

So here is how we begin. The big steps are

It helps first to remove the bottom windshield trim, which I didn’t know how to do correctly so I just pried until the little plastic clips popped off, some cracking in the process. I ordered a bunch from this website, and you should probably too before starting. 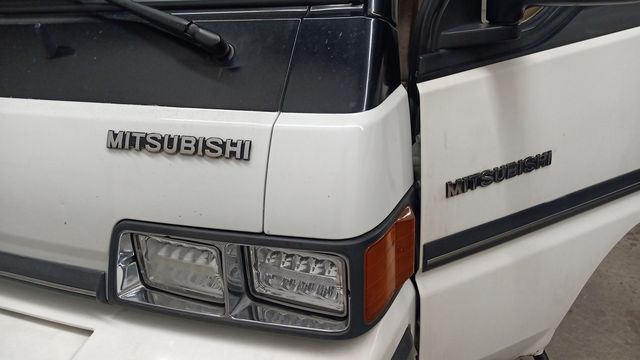 Two of the screws for the corner panel are hidden under the headlight bezel: 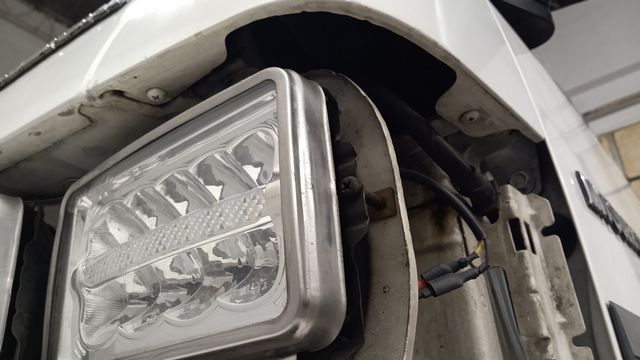 And one more behind the A-pillar inside the doorframe: 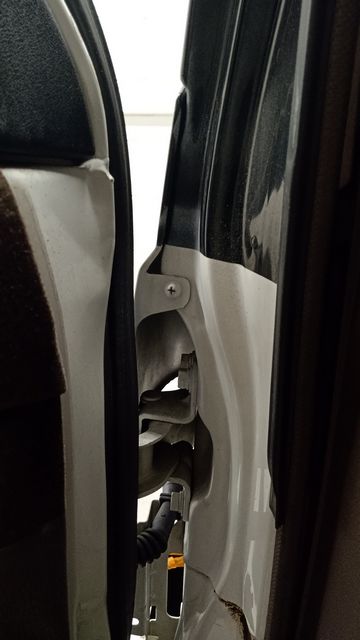 And finally, one last one – the most irritating one, in my opinion, since it’s highly possible that the cross drive screw will be rusted in place. 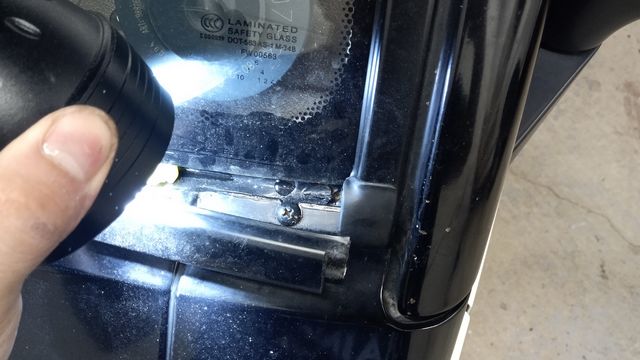 These screws are all going to be JIS type screws, but a good quality #2 Phillips driver will also fit and drive with downward pressure.

I found that heat cycling the screws a few times using a heat gun, then using an impact driver (electric or hammer), was effective in freeing up the stuck screws. Honestly, they weren’t rusted in place so much as just aged together.

The two on the bottom side of the headlight bezel are probably better off done with an electric impact driver because of the awkward angle of approach. If you strip the heads out, you’ll probably have to cut straight slots into the heads and use a large flat-drive bit instead. 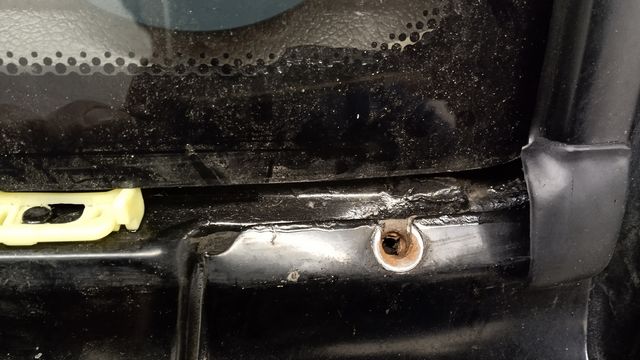 The driver’s side windshield trim screw on mine had some Natural Loctite holding it on, but heat cycling did the trick. It’s interesting to see that the body was seemingly assembled with these screws, then painted. 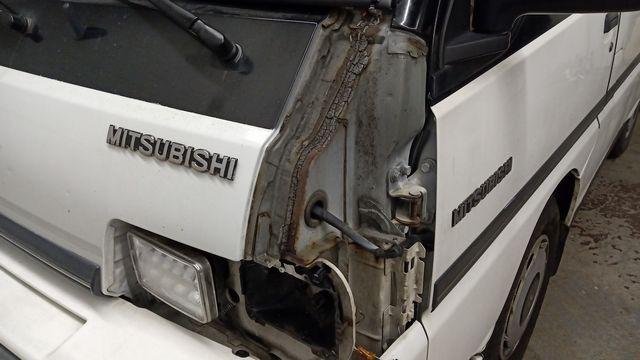 A little bit of wiggling to release two pieces of rubber foam trim strip and the panel will slide off to reveal the abject horror underneath. That’s some pretty deteriorated sealant there!

One of my diagnostics to determine if I had the Delica Windshield Leak was pouring some washer fluid into the corner of the windshield, then heading inside and sniffing around for the mildly-sweet methanol smell and the colored drippings. Sure enough, it was leaking profusely.

Most of the sealant will be so deteriorated they come off with the poke of a screwdriver. I didn’t even really need to break out chisels or scrapers here. 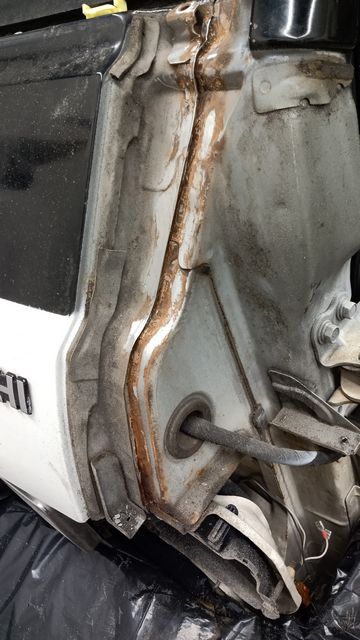 It’s highly likely that the sealant will be hiding some rust, so wire brushing it off and treating it is part of the order. I used a few sizes of wire wheels on a drill to knock as much of it off as I could, manually wire brushed the rest, and applied a little bit of rust converter compound into the gap. 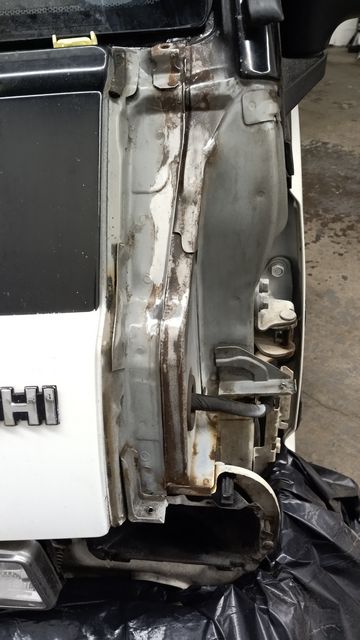 The area after a cleaning and wipedown is ready for new sealant. 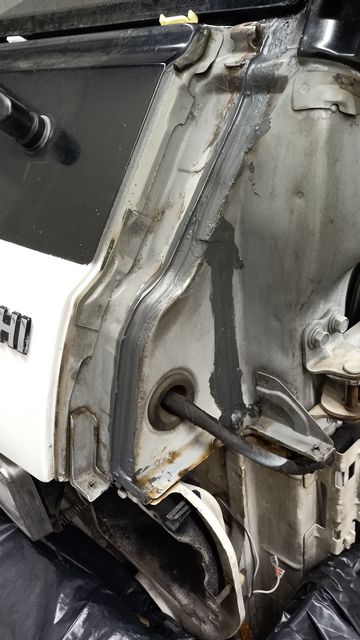 I painted the sealant on in a few blobs first, then smoothed it out into the gap. Make sure to also smear some up top where the windshield seam begins, since that is probably where weak spots will start growing.

I waited for the first pass to dry a little and then went on a 2nd pass to give plenty of material and a healthy fillet in the gap area.

The day after, when the seam sealer cured, I did a water bucket test where I just poured a whole lot of water down this area and watched the inside for signs of dripping. I’m glad to say there was none! 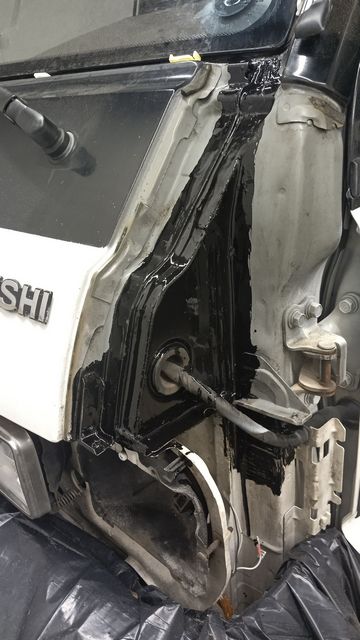 You’d want to cover all the bare metal exposed by the brushing, so I painted on some POR15 in a much more widespread area – I decided to go ahead and hit some of the other surface rust around this area while I was at it. 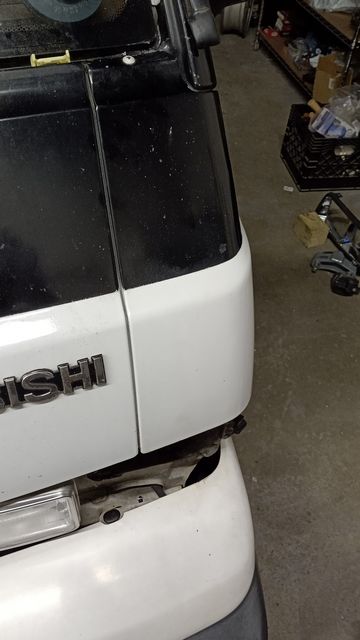 Give a day for everything to dry, and the corner goes back on. You can also replace the rubber weatherstrip foam, but I didn’t.

I also didn’t put the screws back by color – instead I put them back by which one was least stripped and would require the least effort, or most accessibility for Unconventional Screwdriving tools, to get back out. So the more damaged screws went on top and by the door, and the screws which were quickest to come out went on the bottom.

I later picked up some #10 truss-head sheet metal screws in 316 alloy stainless steel and replaced some of these screws with them. 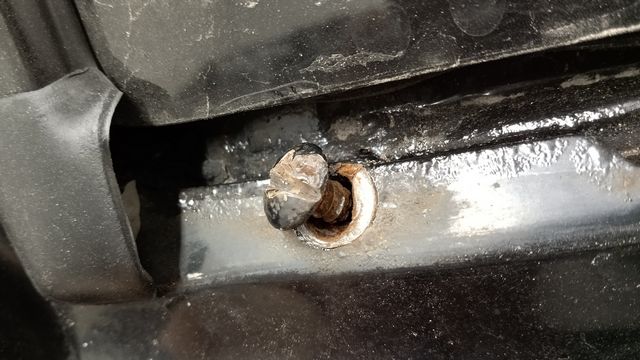 On the passenger side, I ended up having to Dremel a slotted drive into the former cross head, which had deteriorated so much that it basically stripped the instant I tried to torque it. 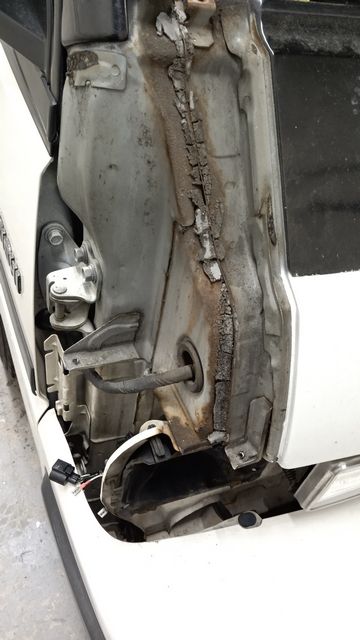 Yikes, this side looks substantially worse than the other, even! 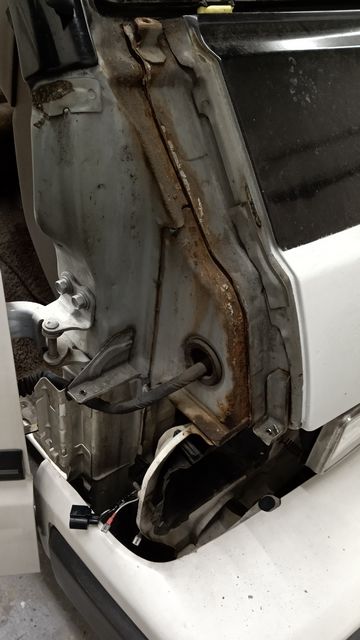 Same procedure in progress! Scraping off of the old sealant (barely any effort required here… it all sort of fell off), wire brushing and rust conversion, and then application of sealant and protection of the area. 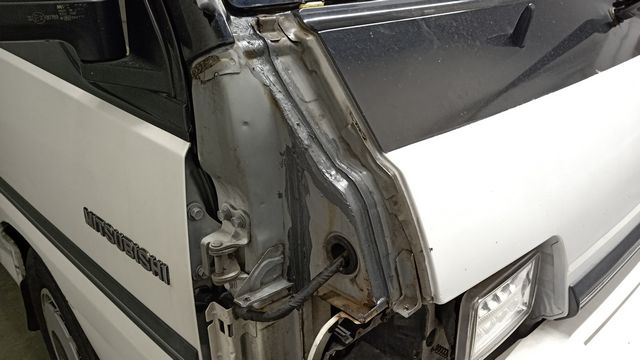 I went a little more gung-ho on this side with the seam sealer use, doing it in one run instead of two. 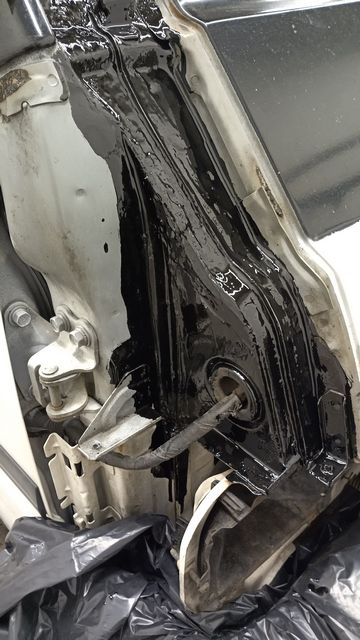 And went a little more crazy with the POR15 on this side, just sort of coating the whole area top and bottom. 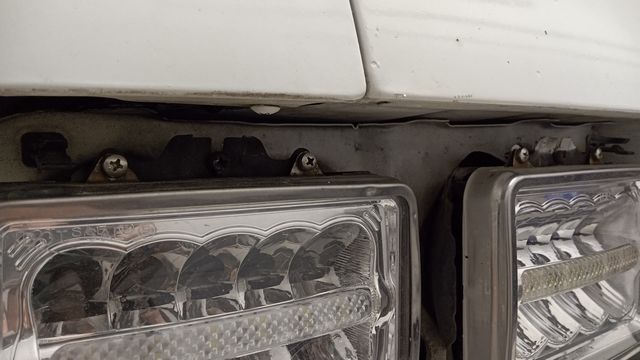 I said earlier I ordered some 316 stainless steel screws for the reinstallation of body panels. I also got these M4 pan-head machine screws to replace the headlight retainer screws, which were otherwise rusty and deteriorated. They did come out with some effort again, so I figured they’d been reused enough times – the threads were almost completely gone – that I should just replace them outright. 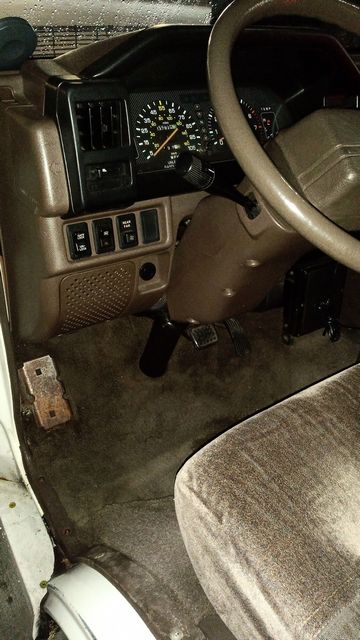 Luckily, the completion of this timed well with 2 or 3 days of rain. I purposefully parked outside all day long to try and see if I got any more water intrusion. Suffice to say, both sides were dry to the degree that I couldn’t tell if it was just condensation or not. The driver’s side had a very confined ｍｏｉｓｔ region which I’m not sure is water intrusion or a worn out window/door frame seal. I’ll keep working on figuring this out, but for now, one of the biggest annoyances of driving in the wet has been remedied. It always felt kind of ridiculous to have a van that isn’t waterproof.

There are other known sources of water intrusion into this area further back by the seat which only is a problem when the tires kick a lot of spray up. I think it’s an unfilled screw hole or plastic snap rivet hole. I know where it is, so maybe it’s time to do some more exploration!