And now we return to another chapter of Big Chuck’s Auto Body Center! This time, I’m happy to announce the eradication of something which has plagued Vantruck since not long after I installed the FITech fuel injection system: That Weird Idle Problem.

For almost a year and a half now, Vantruck has never idled correctly. The air-fuel ratio would sink to as low as 10 or 11:1 almost as soon as the engine was started. This meant it stank of unburned fuel, adding to its absurd reputation. Hot starts were strenuous, needing foot-to-the-floor and gentle nursing afterwards (oh, but it would start with one key bump on the 10-20 degree winter mornings!). When it idling, it always sounded like it was missing one or two cylinders. Yet on the highway, or even anything-but-idling, it was great! It really behaved like a carburetor flooding issue, and my friends would quip about how it still acts carbureted, even after conversion to fuel injection. You will never truly take the ｂｒｏｗｎ out of the vantruck.

I did numerous dives in to try and figure out what was happening. Theories from people abounded, like a localized vacuum leak of some sort affecting combustion only in 1 or 2 cylinders, or some component of the California smog package still being active (which was the real motivation for its epic dismantling a few months ago). I also replaced the spark plugs (let me tell you about THAT some time), the distributor consumables, and the plug cables. Hell, someone even guessed one (and only one) of the distributor electronic ignition points (the reluctor wheel) was just far enough out of spec to not trigger the ignition module. What are the chances of that? Who knows!?

Honestly, through all the Car Guy Advice, it was clear  to me something was overfueling, so I even did things as dumb as turning down the engine displacement parameter in the ECU. None of these attempts had a first-order impact on the behavior, so I surmised it had to be something very fundamental; something as drastic as tricking the ECU into thinking the thing was only 250 cubic inches and not 460 should have at least had a palpable effect.

One of the hallmarks of a strong debugging heuristic is obtaining a mental model for how sensitive the system is to certain changes; but the other is… well, if something is in the last place you looked, check that you didn’t step over it in the first place, right!?

So I stuck a camera, finally, down the bore of the throttle body. I had a vague idea of what it should look like, and hoped that I would be able to tell if something just looked wrong.  Why didn’t I do this before? Well, you can’t exactly stare down the barrels in these damn vans by putting your head over it. I have to either put an inspection camera inside the engine closet, or in this case, hold my phone inside and try to crank it. Great! 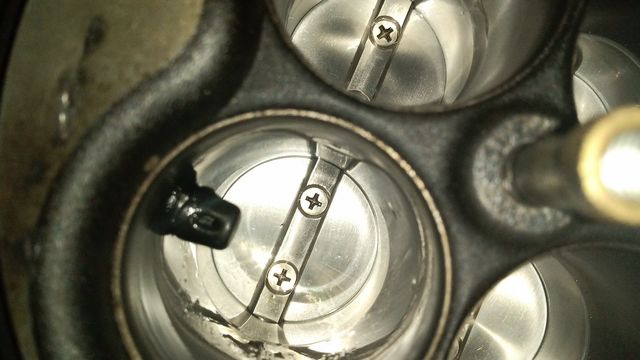 So here we are right after the key is turned to the ON but not Start position. Looks okay so far – barrel 1 (is it called 1? I’m calling it 1) looks a little ｍｏｉｓｔ, so maybe we are getting somewhere. The others are pretty starkly dry. 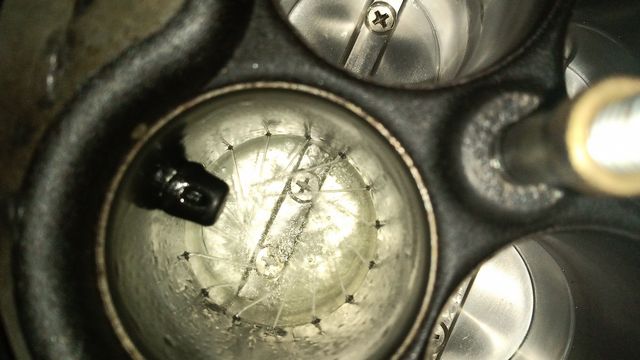 ….and immediately on cranking and starting. Oh, my.

Well that’s no good. The injector handling this barrel is basically stuck open, so the thing was getting fuel for 1/4 throttle while idling. How it ran at all, then, was a complete mystery. I attribute it to the 460 being so stupid it didn’t know any better.

So why didn’t I home in on the injectors initially? Well, honestly, I didn’t even know they could leak!

In principle? Yeah I could see that happening. Never dealt with it, though, and a forum full of carburetor bros is surely not going to say “Fuel Injector”. After some research, I found that this generation of FITech head unit was from shortly after changing injector suppliers, so they experienced quality problems. It was covered under warranty and they would send you a new set of injectors.

But I was impatient. 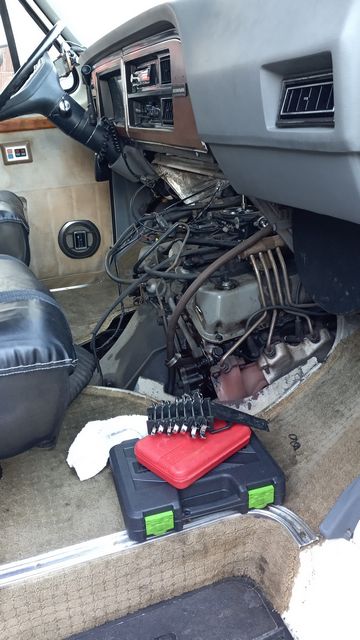 So out it comes! The nice thing about these throttle body injection units is you just unplug a few things  and out pops the whole head unit. So if you route your hoses and cables carefully, the installation can be under 5 minutes, really. 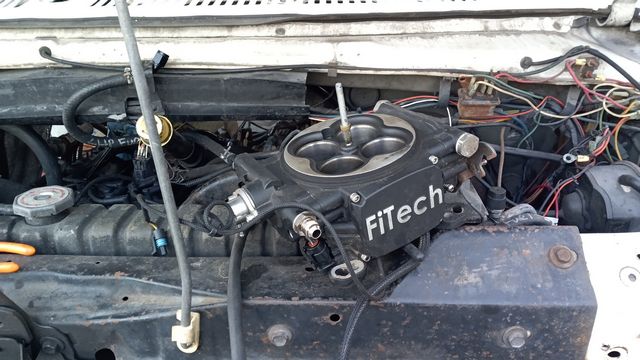 Come here, you problem child. My plan was simply to plug up the leaking injector and throw this thing right back in. 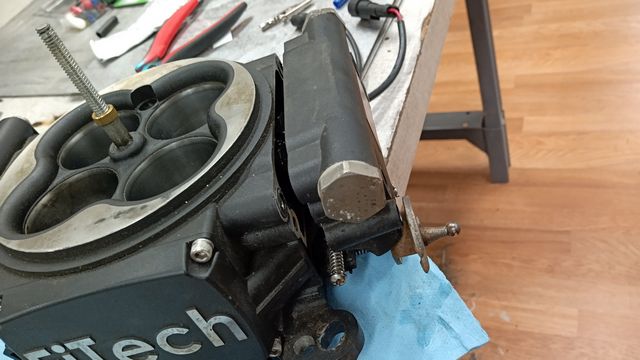 To dismantle the FITech unit’s pressurized fuel rails, there are two large 1/4-20 socket head cap screws on either side that need to be released, and then the things pop up upwards at a 45 degree angle. Not straight back or straight upwards. O-rings towards the front and back of the unit get squished into grooves in order to seal the fuel rails; these look like they should be replaced every time you do this, but I elected not to for now. 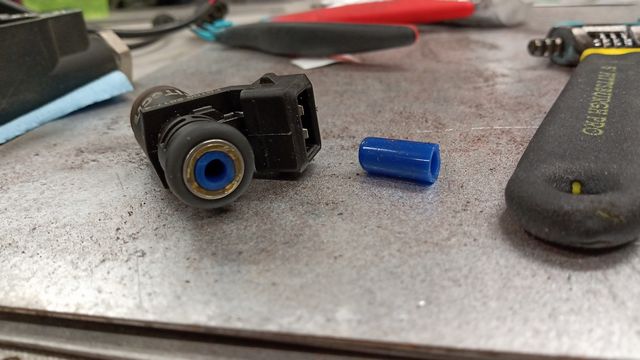 To plug the leaking injector, or at least head off its flow to a point where it didn’t really contribute, I resorted to abject terrorism and shoved a cut-off piece of vacuum fitting cap into it. I don’t care if this thing swells or distorts with gasoline contact – so long as it sufficiently reduced the fuel flow! 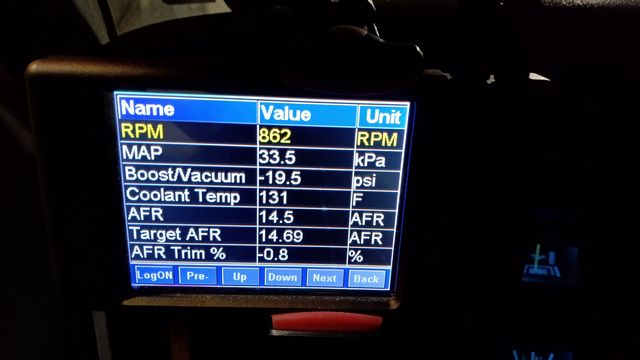 And the truth reveals itself after a full ECU reset to clear any memory of the incident – now, the idle is far smoother and more stable, and the AFR ratio is very tightly managed. Hurray!

Sadly I didn’t have the foresight to also swap one of the secondary injectors with the blocked primary injector, since it pretty much only uses the primary barrels for low throttle. That means it was missing half of its injection capacity, so stepping on the pedal quickly would overwhelm the other injector and cause it to lean out and stumble. But if I kept it gentle, I was even able to highway drive reasonably well since the secondary barrels kicked in the difference.

Nevertheless, it seems like the issue was resolved. It was now time to call FiTech up and ask for a new set of injectors. 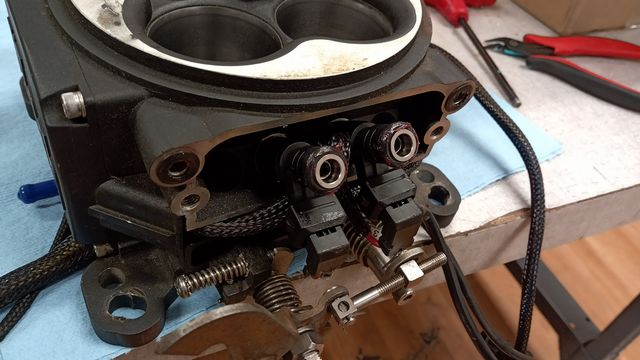 Fast forward a week and so and I’ve dug the thing out again to replace all four injectors with the newest revision parts, replacing the fuel rail O-rings in the process while I was at it. The new injectors get a small smear of grease to facilitate installation, and then the whole mess was unceremoniously stuffed back in. And it worked! My goal was to get this surgery done before Motorama 2019, and I put it together a few days beforehand.

So did the gas mileage get any better!? Well, not really. See, the leaking injector would only really manifest itself at low throttles. On the highway, it’s basically running in that state constantly anyhow. If the ‘city’ mileage improved, I sure as hell haven’t noticed. But at least now it starts quickly, idles less asphyxiatingly (more long-term lung cancer now, I suppose), and responds much more crisply.

With Vantruck now driving competently, I can now turn my attention to the next steps in making it more gooder. One added bonus? 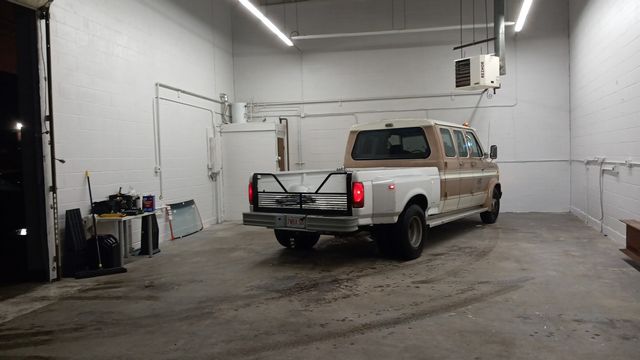 I managed to secure a garage space across the street from the (now previous) shop. You know what? A garage is a garage. It’s enclosed, heated, and has a modicum of power and lighting. And even a mini functional bathroom. You’ll be seeing more and more of the now-real Big Chuck’s Robot Warehouse and Auto Body Center in the future.