Last time, I had just gotten to replacing most of the seals on and cleaning up the old head before discovering a cracked exhaust valve which meant I couldn’t put everything back together before getting new ones. That delay pushed back the timeline just long enough for the Chinesium Solution to appear: 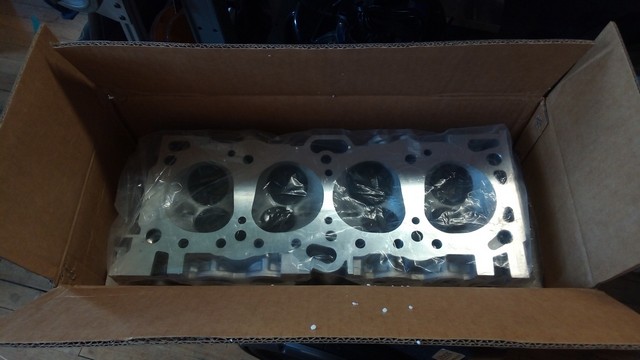 – me, when I opened the box

To recap, while searching the neighboring galaxy Craigslist for old Mitsubishi truck/van parts, I discovered that there is still a lot of Chinesium aftermarket support for this engine family, the 4Gxx series. So I took a leap of faith and spent $400 on a complete cylinder head assembly, in the interest of exploring the solution space and documenting it for all other silly van enthusiasts as I tend to do for everything. 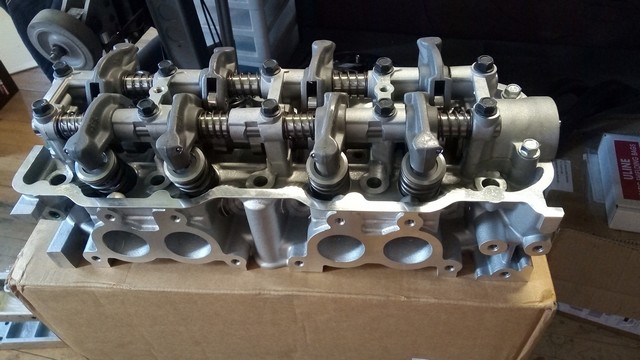 The appearance is virtually identical to my current cylinder head, minus one or two things which jut out in the corners, possibly for different accessories or mounting needs later on. However, the biggest added feature I noticed? Roller rocker arms! That’s worth at least like 1 horsepower over flat ones, which to me is a 1% gain. 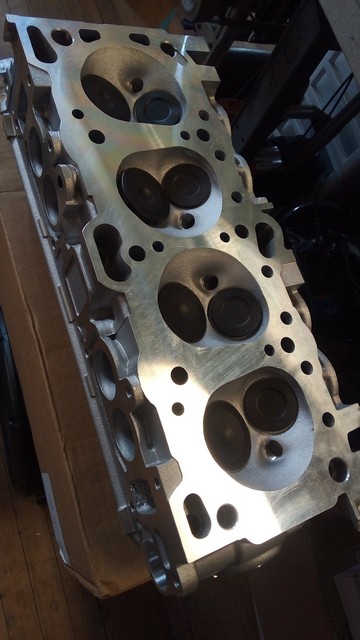 The gasket-mating surface of the head is otherwise identical. 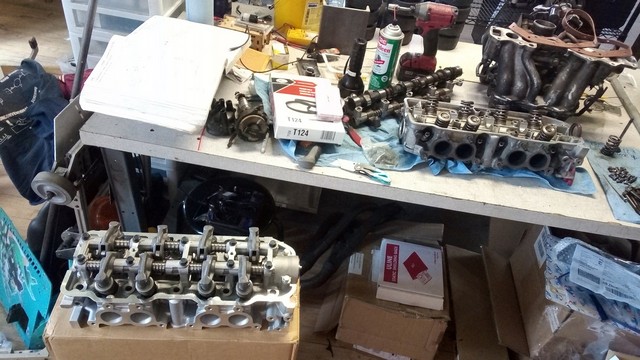 So now I’m left with a conundrum. Which head do I use!? The old one is proven and has most of its wear parts changed already, but I had new valves coming and would be changing those out, but without refinishing the valve seats. The Chinesium Option is brand new – late-2017 date code on the casting and still smelled like machining coolant – but my fundamental skepticism of Chinesium persists.

I figured that at the end of the day, all things considered, Chinese people also prefer to have working cars – so this thing probably doesn’t not work, but might have parts that have  shorter wear lifespans. However, I’m of the opinion that any new parts I can find for this thing are already Chinesium, or already will not have the expected lifespan of an original Mitsubishi OEM part, or both. For example, the head comes preloaded with valve stem seals which might wear out again at the 50-70K interval. Or they might not. Who knows?

Fact of the matter is, after doing this dive, I’m no longer uncomfortable and scared of a lot of the process, just understanding that it takes time. So what if this thing instantly and catastrophically fails – lesson learned, shove the old head back on. So for now, I’m keeping the old head around until the new one either proves itself or doesn’t.

And so we cross the point of maximum entropy, basically when your shit is the most taken apart and hopeless. 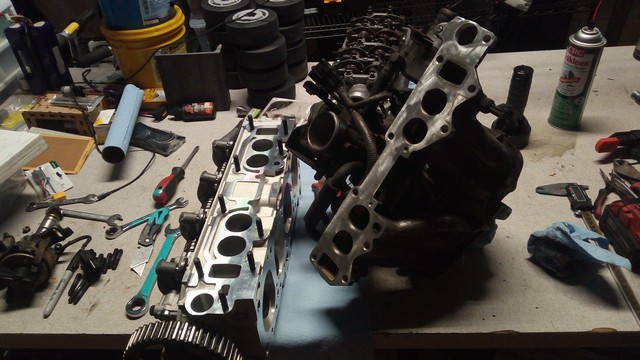 The new head even came with studs. I picked up a pack of new metric nuts to replace the hodgepodge of hardware that was on the old intake – which I still can’t figure out if it was factory-intentional or the result of some previous surgery.

This was the moment I discovered that JIS (Japanese Industrial Standard) and the rest of the world has different wrench sizes for various fasteners.

Chances are, in the U.S., if you even touch metric at all, it’s the ANSI or ISO standard. JIS is Japan’s own thing, and it has different head sizes for nuts and bolts. I finally understood why some times I found M8 nuts and screws that had 12mm hex heads and other times with 13mm ones, or more drastically, M10 nuts and screws with – get this, 14, or 15, or 17 millimeter wrench needs. I took most of these parts off with a 12mm wrench… but a 13mm is being used to re-arm them!

To be super authentic and ジェイ ディー エム, I’d have to hit up the local metric automotive supply place and get some JIS small-wrench hardware. But McMaster-Carr is just so easy. 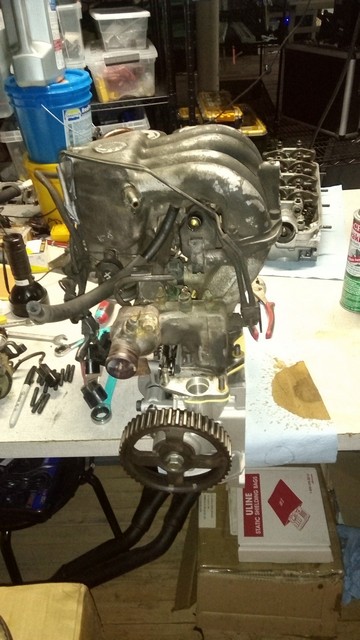 The intake manifold now being mated to the new head. I took this opportunity to replace a few of the rubber hoses which I noticed had become sufficiently mummified, including the PCV, PCV breather, and a few vacuum lines. 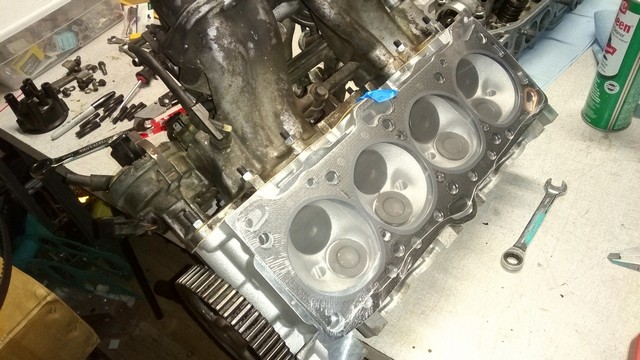 Before I go too far, just double checking that it’s correct….

It took me a little while of searching to find how to re-mount the distributor. I couldn’t find where it was referenced in my USDM van manual at all, just occasionally sketched in with the intake manifold and cylinder head. I had to do some searching and found a 1990-1994 4G6 workshop manual hosted by the Canadian Delica club, where I found the instructions for the SOHC head, reproduced here for saving my ass later: 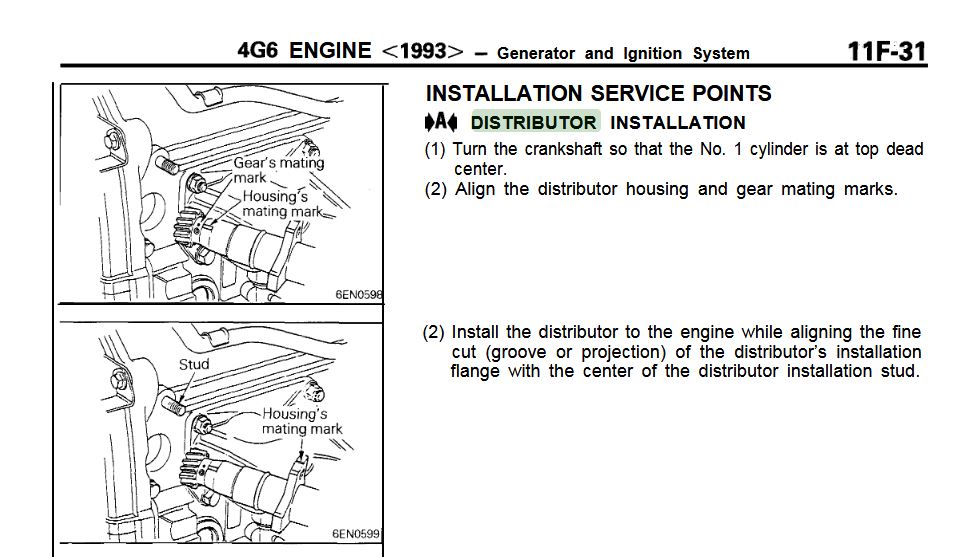 Hey, I have those locating features! The distributor will need to be fiddle with once mounted anyway, so I really just wanted to get the initial gear mate correct.  When it is correct, the rotor will face essentially straight downwards with the head in a normal upright position. 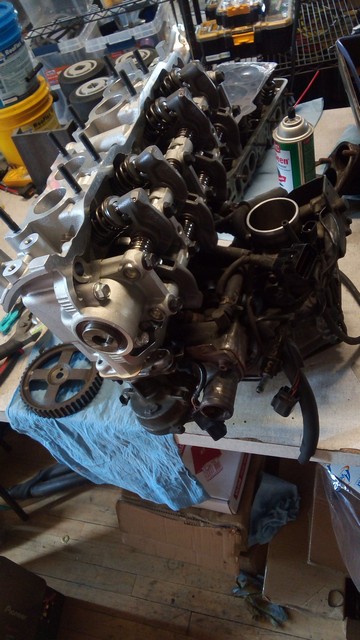 Now I flip it over and mount the exhaust studs, which are the same type. 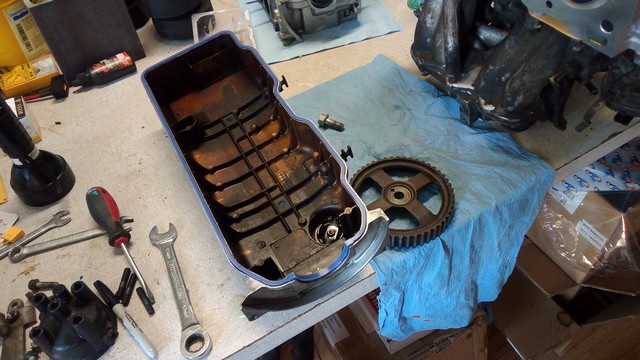 After the head assembly was prepared, I cleaned and prepared the valve cover with a new gasket and also added the half-moon shaped plug to the back of the cylinder head with some silicone squirt-a-gasket compound. 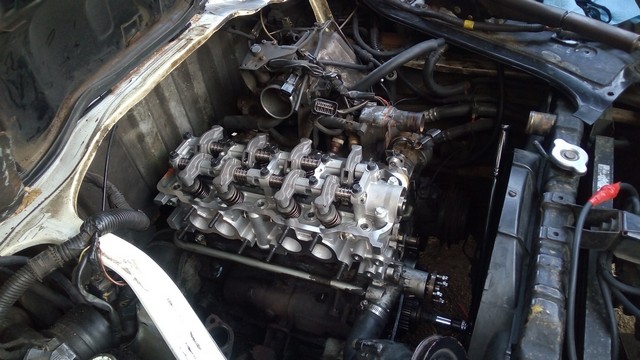 The whole assembly was maneuvered into place with some help and put in its final location without the head gasket first – this was just to make sure it was basically in the right place to begin with and we wouldn’t be hovering over a “Don’t fuck this up or it will explode instantly”-class component trying to find the two mating locations.

After it was dropped in place, I simply had someone hold the head up a little and slid the gasket into place, then the whole assembly was dropped back down. I then sprinkled some oil into the rocker and cam area, around the lifters and springs, and a bit into the valve stem seals to start them off. 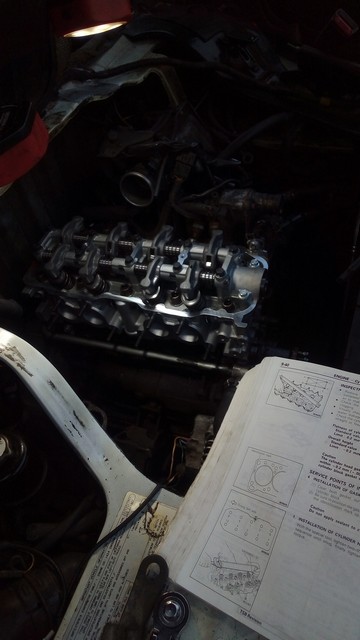 The fun operation of torquing the head bolts now begins! It seems like some times you’re recommend to torque them to specification and then check it again after a few hundred miles or several cycles, and other times you’re recommended to give it some extra goose to ensure you don’t have to do that. But either way, that sounded like “old school car guy” advice…. for people who can just pop off the valve cover in their very clean and accessible open engine bays without having to remove half of the vehicle (because 50% of the length is hood) and just crank on the bolts a little harder.

You know what, I think I’ll stick with the “Extra Goosing” strategy. Beforehand, I thoroughly washed the head bolts themselves as well as made sure the clamping surfaces under the washers were clean – this was one area where I could see “Torque it a little more” being the cure-all for dirty or oily head bolt threads and lands. 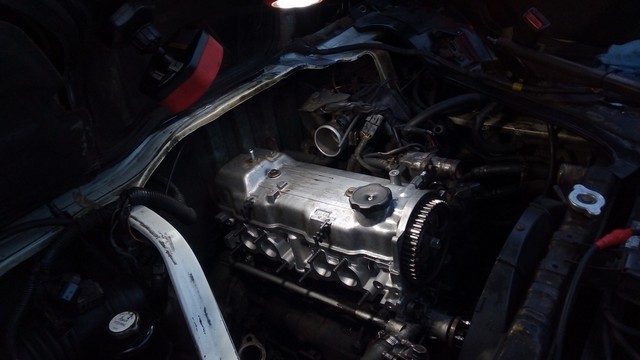 With the head bolts secure, the worst of the storm is now history. Everything else from here on is making sure I don’t forget how to plug something in. 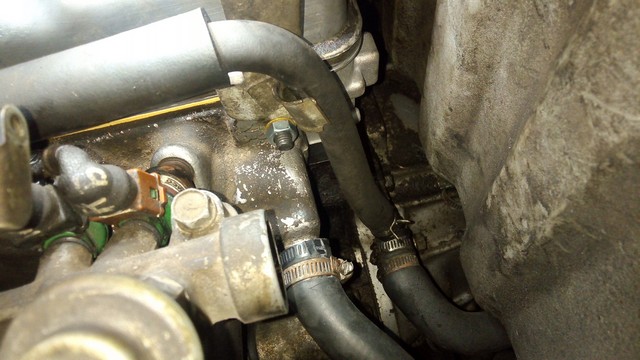 The task of reattaching all the random hoses and lines now begins. I moved all of the aft heater hose connections and clamps to more accessible positions that I could get at from the top only…… if, for instance, I had to run back in here shortly. 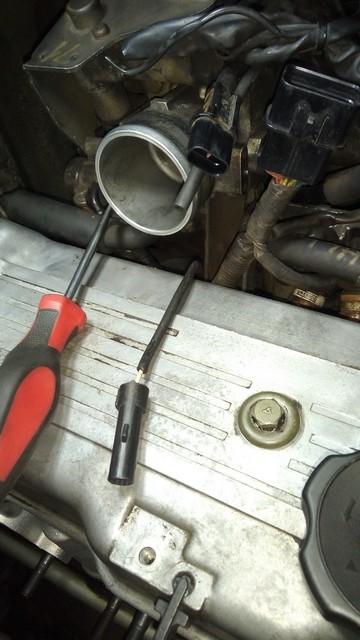 Some of the more snowflakey connectors had to be routed through the intake manifold curve, like the oil pressure sensor harness. They don’t reach otherwise – I contemplated extending them so they could be routed around if needed, but the idea is I shouldn’t have to keep doing this, right? 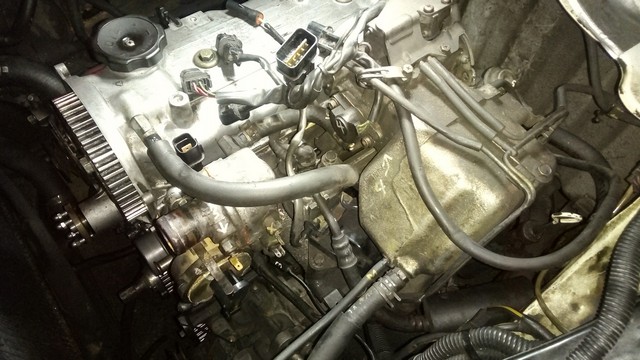 Now it’s time to try and remember what my gratuitous labelling meant. I not only drew on the connector themselves, but the connector mounts and seats, and even on the cables. And even in regions where the cables had to go. I wasn’t leaving anything up to chance. 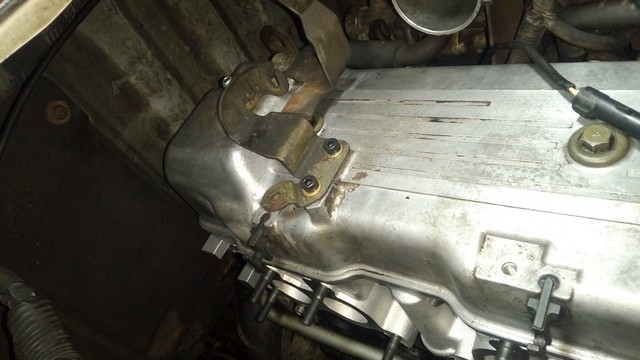 ….except, apparently, where I put two of the small M6 flanged mounting screws. What? I thought I sequestered all of the hardware in little baggies with their associated parts!

Who knows – maybe I will find these screws randomly one day in the back somewhere. In the mean time, I had to sub in two of my M6 socket cap screws. 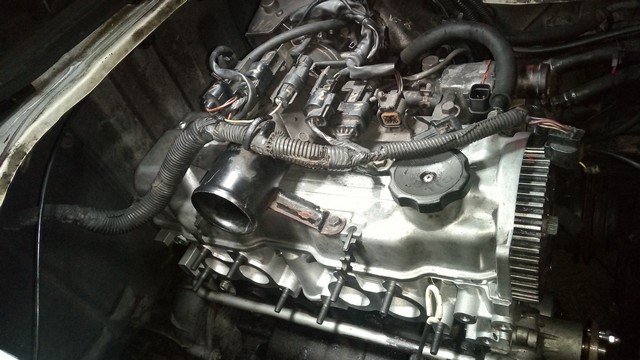 Okay, my mechanic friends were right – things really only do go back together one way. 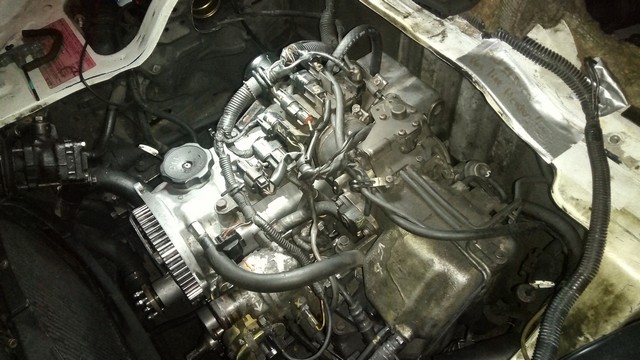 Making the connections on the intake side now, including several vacuum lines and water temperature sensors. 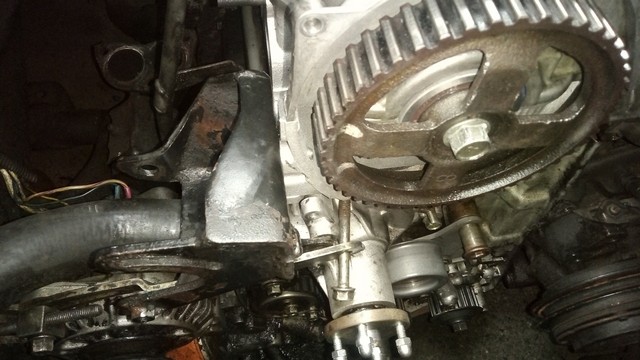 After all that was complete, I discovered what is so far the only incongruity between the original Mitsubishi head and this chinesium special: The power steering pump bracket is displaced an additional roughly 2mm in offset distance from the side of the head.

Hmm. Well, it could have been worse, I suppose. This meant the PS bracket and alternator mount don’t line up with the hole they need to. This was resolved by turning the PS bracket hole into a C-shaped slot with two quick Dremel cuts.

All of the accessories and cable and hose connections were now reconnected. By this time, night had fallen again, and I elected to not repeat my mistakes and try to put the timing gear back on now. That battle was for another day.

In the mean time, before I put the thing back together, I decided to tackle an additional demon: 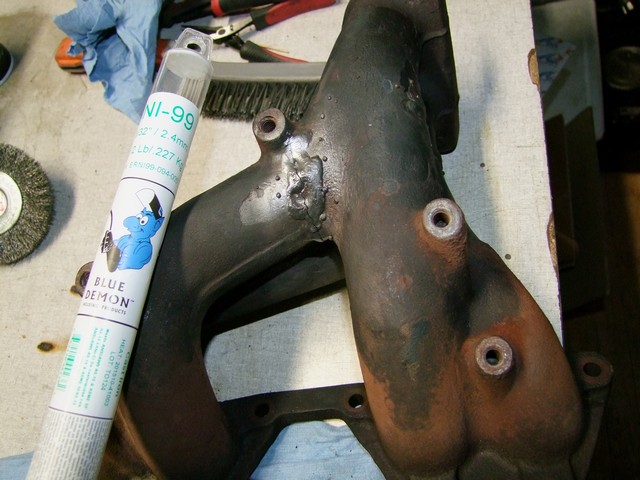 The exhaust manifold has been cracked since time immemorial, and it’s only gotten worse over time and heat cycles. I figured while I had everything dismounted, I would try to repair the crack as much as I could. It was cracked not only through the collector region on both sides, but also in the valley, which was going to be rather hard to reach.  And honestly, it looks like several people have been here before me – as usual – so I probably can’t make it all that worse!? I picked up some nickel filler rod for the purpose after doing some research on welding and brazing cast iron.

Oh, and my new valves came in finally. 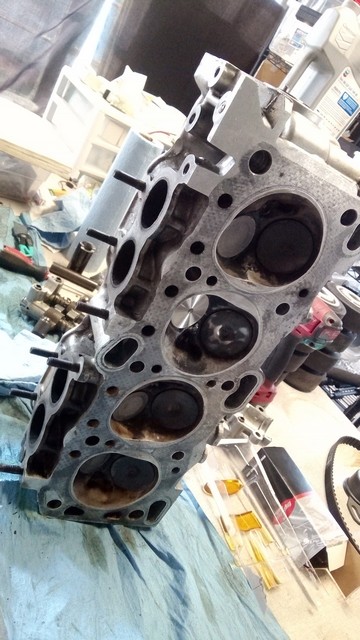 So for now, the old head also sits at the ready if it has to be recalled into service…