It has been an eventful few weeks.

I started at iRobot as a summer engineering intern, tasked with building Terminators.  I was invited along, and subsequently went to, the Buckminster Fuller Challenge award ceremony in Chicago with Smart Cities.

And I finished, broke, finished, then broke, then finished LOLrioKart. I’m waiting on the next “broke” cycle.

Let’s start with a batterygasm. 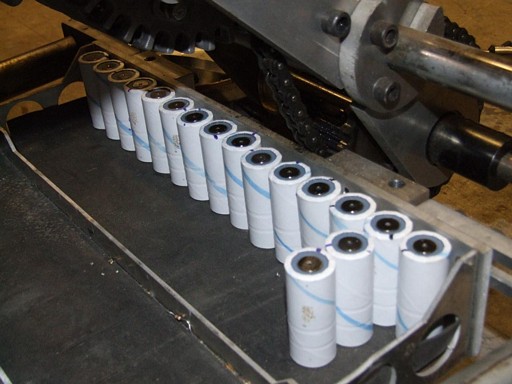 From the deepest dredges of “Well, they technically never asked for it back”, here is a pile of A123 lithium nanophosphate cells. These are the most ballin’ shit in terms of batteries available today.

The backstory is that A123Systems, through its ancient ties with MIT, donated Over 9000™ cells which failed quality control to the Electric Vehicle Team. The Media Lab also received some for sampling, and being Smart Cities, we quickly snapped them up because… well.

Anyway, I was tasked with the fantastic task of determining what “failed quality control” means. For the most part, it means “smudge” or “wrinkle in the cardboard”, but a few cells were genuinely low voltage or had high internal impedance. Through a series of trials and strictly controlled processes involving a giant power resistor, car battery, and multimeter, I determined that essentially 95% of the cells in each case of 100 were most likely good for our purposes.

Great news for us, better news for me, because A123 probably has more.

Anyway, to equal the 54 volt, 30AH nickel batteries I already have (nominally – these cells are totally fucked and probably return less than 20AH as a pack), I would need about 225 cells – 15 cells in series for a nominal 48 volts, and 15 cells in parallel for about 33AH. The reason I calculated the numbers for 48 volts is because I do have access to 15S chargers for the chemistry, from the car. That’s something like $3500 in batteries if I were to drop some cake for it.

Or two boxes of cells. Come on EVT, you know you want to donate some to The Cause. 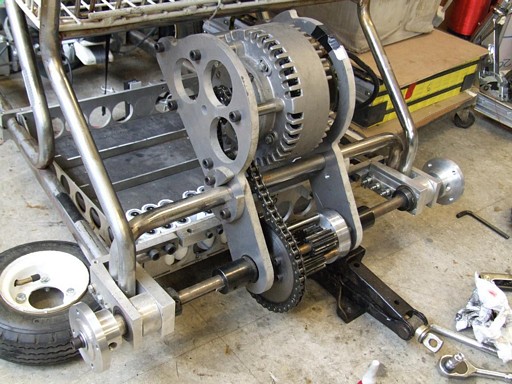 In order to resolve the “dude, what the hell is 42 volts doing on my frame?” issue, I stripped the entire electrical system down and pretty much rebuilt it. At the same time, I took apart the back end for cleaning. If you’ve never seen the kart’s running gear, here it is. 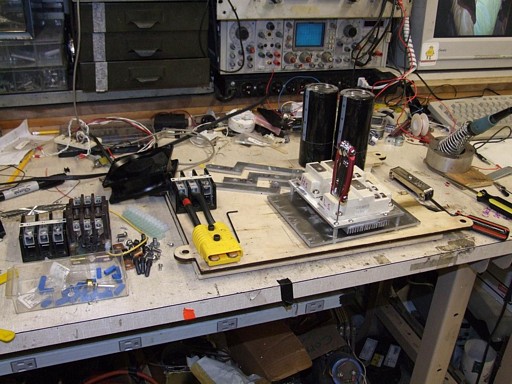 While rebuilding the electronics, I decided to try to minimize the footprint of the ginormoFET controller. Here’s the dismantling in progress. 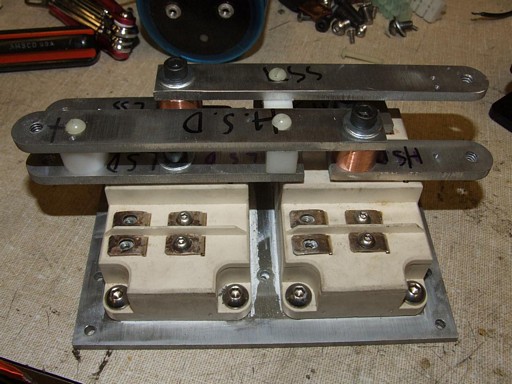 And here’s the completion.  By stacking the busbars, I gained a few square inches more… board space? Deck space? Scrap-of-plywood space? Additionally, it was easier to arrange the wiring to suit the rest of the electricals.

I decided to forego fan attachment until heat was determined to be a major problem. 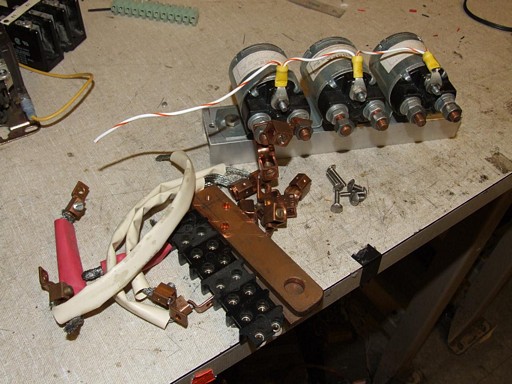 Contactors donated to The Cause by another MITERer. They are rated to switch 100 amps. In theory, they should never be switching current in my electrical system, merely passing it after closing. Switches tend to conduct far more current in a circuit than they can reliably close or open, so I’m not concerned about melting the contactor. 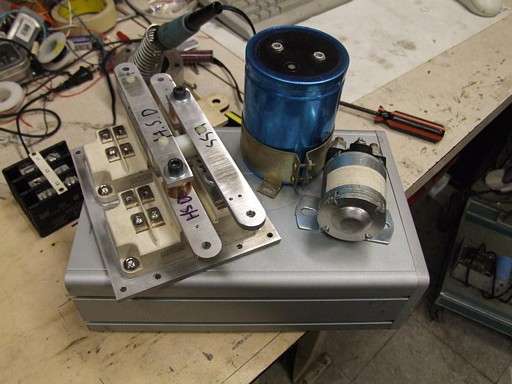 Also included in the deal is a Hugeasspacitor™. 33,000 microfarads of love at 75 volts. 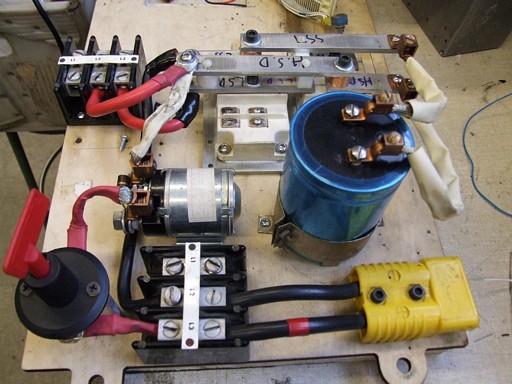 Most everything in place. I mounted all components with short wood screws this time, which saved alot of drilling and… yes, threading of wood. That was such a dumb idea that I only could have done it at 4am.

The DC key switch is a battery cutoff switch, and isn’t intended to actually turn the kart on and off.

The power system has two stages. First is the closing of the battery switch with the contactor still open. A resistor bypasses this contactor and goes straight to the controller, which allows the Hugeasspacitor™ to charge at a reasonable rate.

The reason for this precharge resistor is, without diving too much into Course 6 theory, that capacitors appear as an instantenous zero-resistance  to a sudden step in voltage. You know, like closing a switch really fast. What that means is if I just threw the capacitor onto the battery, there would be a Big Spark as infinity amps tries to flow into the cap at once. The problem is that if the cap is now charged, there is still infinity amps trying to cram into it. Not good for the capacitor, and especially not good for whatever poor switch gets caught in the middle. It’s easy to weld contactors like this.

So the second stage of the power electronics is powering the contactor, which opens a very low resistance path. I can now drive off into the nearest oncoming semi.

A 12 volt DC-DC converter provides the contactor current. This is placed before the resistor but after the switch so I can run accessories without the main controller being powered. 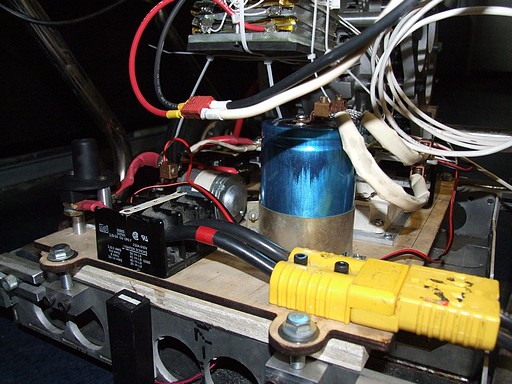 Alright, a furious night of building and debugging without pictures later, and here’s the system ready for a test run. The night was mostly consumed with debugging my dumb hardware PWM generator that I pledged never to make. Because it’s on a breadboard, there were Over 9000™ things that could have been wrong with it.

It ended up that my comparator was dead. After tearing the whole thing apart to discover that, I threw on a new comparator, coated the board in hot glue, threw it on the kart, and called it a night. 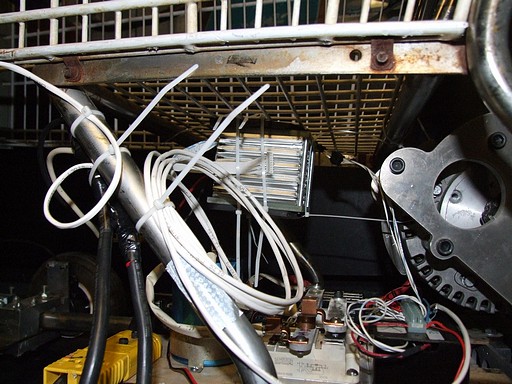 The safest way to perform a test run is of course to strap a 36 volt 10AH lithium polymer pack right under your ass. 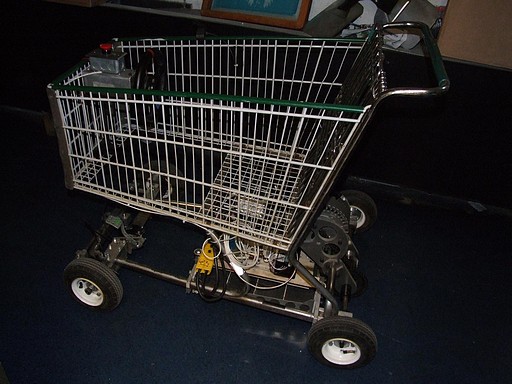 A beauty shot, if you stretch the definition of “beauty”. Notice the emergency stop button. This is the contactor controller.

Yeah, yeah, testing… It was late and nobody wanted to grab the camera. So LOLrioKart sails down the hallway successfully. In this configuration, I drove it to Swapfest the next day for some lulzy in-field testing. 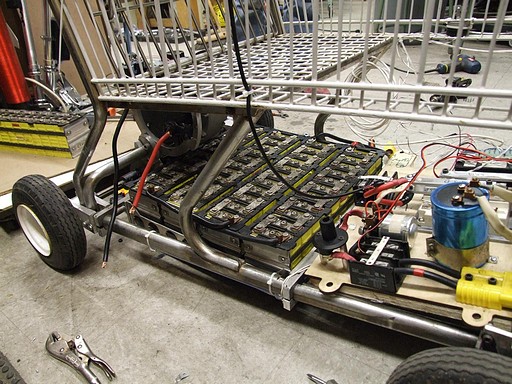 So I couldn’t resist. I had to put the voltage-leaking Nicads pack on the kart, because there wasn’t another way to get greater than 36 volts. My DC-DC converter, rated for 48 volts, shuts off exactly at 36. What’s the nominal voltage of the lithium test pack? 36. If I floored the throttle, the kart would turn off.

Before throwing the packs back in, I thoroughly coated the bottom of each pack in rubber sheeting, just in case I missed a spot and metal touched metal while in the basket.

Despite my efforts, there was STILL live voltage present at the frame. How’s about them electrical gremlins?

However, it was a high impedance leak, so I wasn’t worried about shorting something through the frame. I decided to go ahead with this installation. 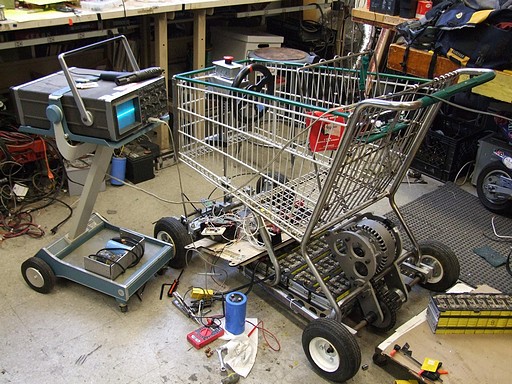 Scoping out a(nother) PWM generator problem. I went through FET driver chips like crazy, for reasons totally unexplainable; not even the resident EEs could figure out what I was doing wrong.

The voltage leak was ruled out as a cause because the DC-DC converter provides voltage isolation and no component is frame-grounded. That I know of, anyway.

Out-of-range operation was also ruled out, since I’m running the chips at less than half their maximum voltages. The FET gate had a bleed resistor and the throttle input has an RC filter inline.

Transients were the main suspect, so I arranged some more low-value caps around the important parts.

It seemed to be stable. Time to figure out which way the motor is supposed to be hooked up! 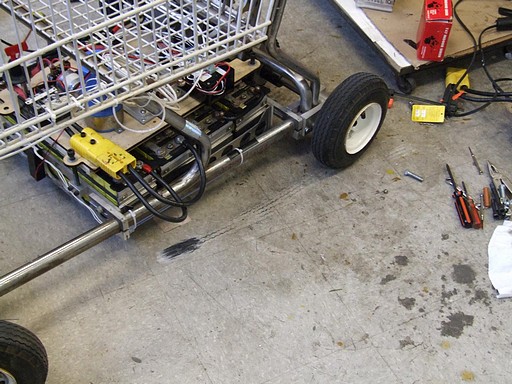 This is what we call “Nope, it hooks up the other way”. I like where this is going.

Alright, so maybe not this picture, because “where this is going” was straight backwards into a shelf. 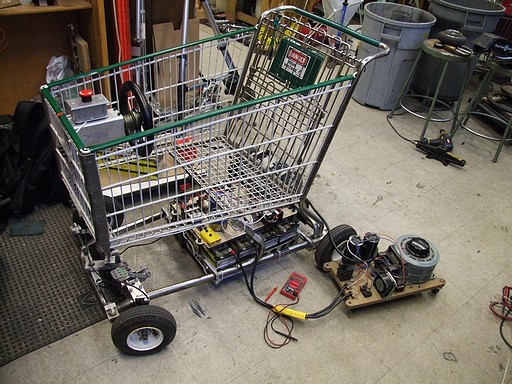 Giving the nicads a wakeup charge. By virtue of sitting for two weeks, some of the cells have fallen back to zero volts.

That’s how totally fucked they are.

Using the HOLYCRAPWHATISTHAT, I dumped 25 amps into the cells, which is pulling something like 1600 watts.    After an hour and so, they were nice and warm. 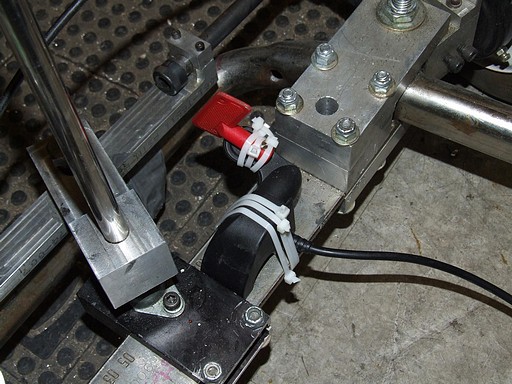 Totally the most legitimate throttle pedal ever. That’s a spare bettery switch key zip-tied to a bike hand throttle zip-tied to the frame.

Video time! I decided this was legit enough to take on the streets and have some fun, so I drove to campus and found some testing grounds. It had been raining for two weeks at this point, and I couldn’t really hold it in any more.

Afterwards, I decided this pedal was just not legit enough to keep, and that my scooter needed the throttle back really badly, so I fabbed up a pseudopedal. It’s not really any more legitimate. 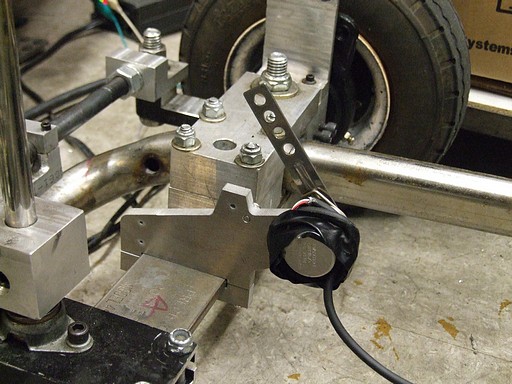 I had a “resistive throttle box” already, so I just scrounged some parts from it and assembled them onto a mount I cut out long ago. While it’s functional, the positioning is the least ergonomic thing in existence. I kind of have to side-roll my right foot onto it.

Alright, so it’s good for now. Time to start working on the priorities, like… 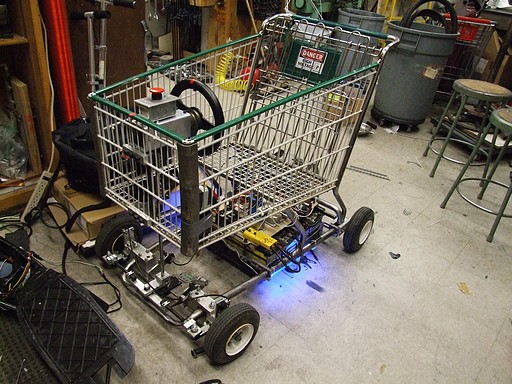 …instead of, you know, functioning brakes.

Seriously, the little band brakes have deteriorated to the point that stopping doesn’t really take less distance if I completely step on the brake pedal. They really were not made for the task of stopping a 350+ pound vehicle at n miles per hour, where n is between 20 and 30.

And so this is how the kart was set up for its first ever road trip, from MITERS to the extreme western tip of campus, a distance of roughly one mile each way. No video is available due to it being completely spontaneous