As the world might have been reporting nonstop, Boston’s been getting some snow lately. The biggest snowfall of 2 feet or more was forecast for mid-last week, centered around the evening of January 27th, with what ended up being a followup 12-15″ or so over the succeeding weekend. Besides exercising Landbearshark for the first time since last year, there were… other shenanigans.

Seemingly par for the course at MITERS, instead of all escaping home on Monday evening, people instead began showing up and battening down the hatches for the foot-and-a-half forecast for overnight Monday into Tuesday. As I was preparing Landbearshark for deployment – charging the batteries from last year and drowning some rust in WD-40 – I texted (we ARE millenials after all) the fateful words to my buddy Adam:

Hey, do you still have the parts for melon-backpack? 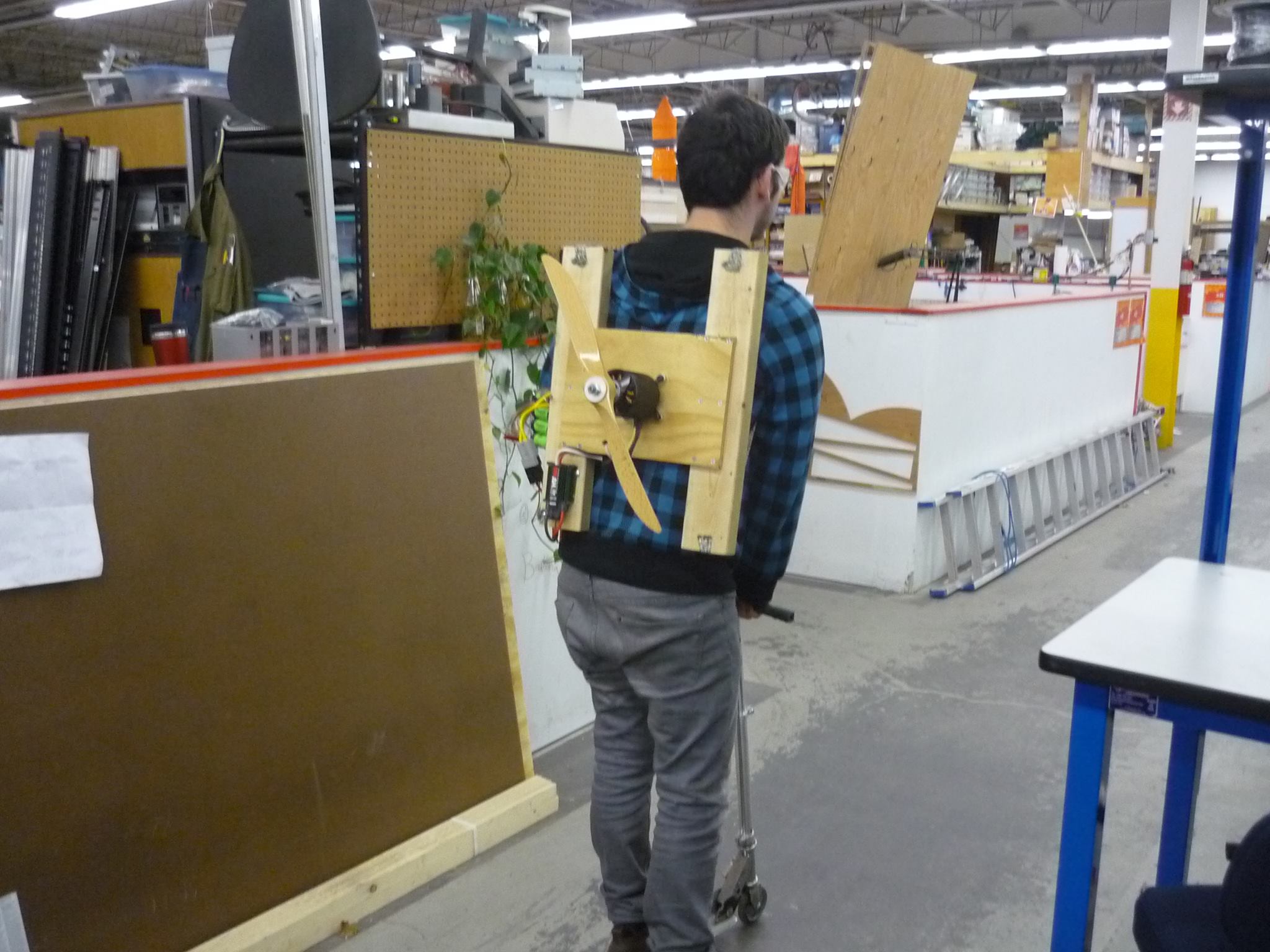 Did you think I was kidding?

Let’s be clear here. I was thinking of folks at MITERS strapping themselves onto skis and bombing it down Massachusetts Avenue in the Missing Manual Formation (used whenever someone misplaces the CNC mill programming guidebook). The events of that night were to take a turn beyond what anyone could possibly have considered a good idea.

To truthfully capture the events, I have to back up a little bit. Earlier that night, I was sketching lines on a new sheet of 4′ x 8′ x 0.125″ thick polyethylene sheet trying to put a decent sled for LBS together, instead of what literally was just a scrap of said polyethylene sheet and ratchet strap used in the aforementioned video from late 2013.

No – this time, it was going to be a ratchet strap and more than one piece of polyethylene put together. Lest I be ambiguous, there was serious engineering going on here, like spending more time trying to figure out how to split the sheet into 36″ x 24″ laser-cuttable pieces for use on my Epilog 36EXT machine than, like, just taking a jigsaw to my scribble lines. Serious precision sled.

Shortly thereafter, around 9PM, Adam showed up with a clutch of the 80mm-class model airplane motors we call “melons” (due to a now-vintage in-joke that they are the size of small honeydews or cantalopes), 24″ wooden propellers, and a great bunch of “Sand Castle” 160A Hobbyking controllers, so called because they “resemble” Castle Creations controllers of the same class.

It took maybe 30 seconds of discussion, with the ever-battery-endowed Dane also present, to combine the two designs into one, shown here: 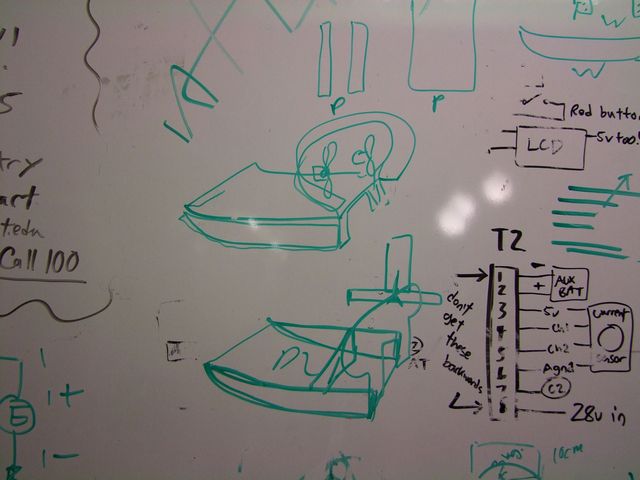 This was as far as the engineering ever got, for after confirming the validity of the design, we split our separate ways.

I was to generate the mechanical framework and machine the panels from standby 3/4″ plywood in the shop material pile. Dane went to retrieve battery modules, and Adam began heading up the electrical system assembly. So there you have it – instant startup! We even got a freshman intern or two from MITERS. I never got around to figuring out who was CEO. We will, however, entertain investors.

Here’s the mechanical development end of things. All I knew was that it had to carry two 24″ propellers spaced far enough that differential thrust would be an effective means of steering. I used the floor tiles as a layout guide and ergonomic sanity check, going as far as to have people measure me sitting down on the floor. Of course, with any rideable creation that uses me as the model organism, most everyone else was going to have trouble fitting in it, so I increased all the dimensions a few inches to compensate. 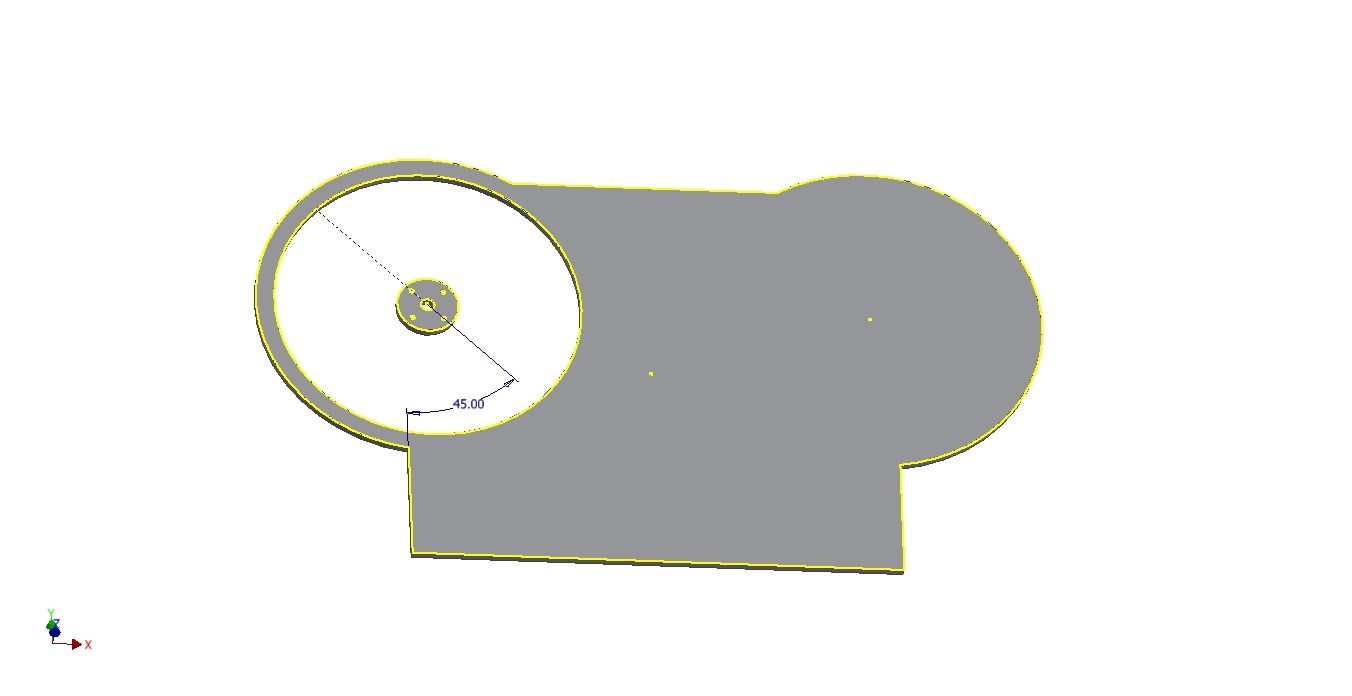 Seen here is the basic outline of the main slab of wood that will mount everything. I made this whole drawing as parametric as possible, in this case meaning that critical dimensions are linked to one another based on ratios and formulas such that I could change the separation distance between propellers, their vertical height from the ground, and the like without having to manually manipulate the overall shape. That’s because while this was being drawn, we were still taking dummy measurements of what the idea seating position would be if you were to precisely place your head between two screaming 24″ propellers. 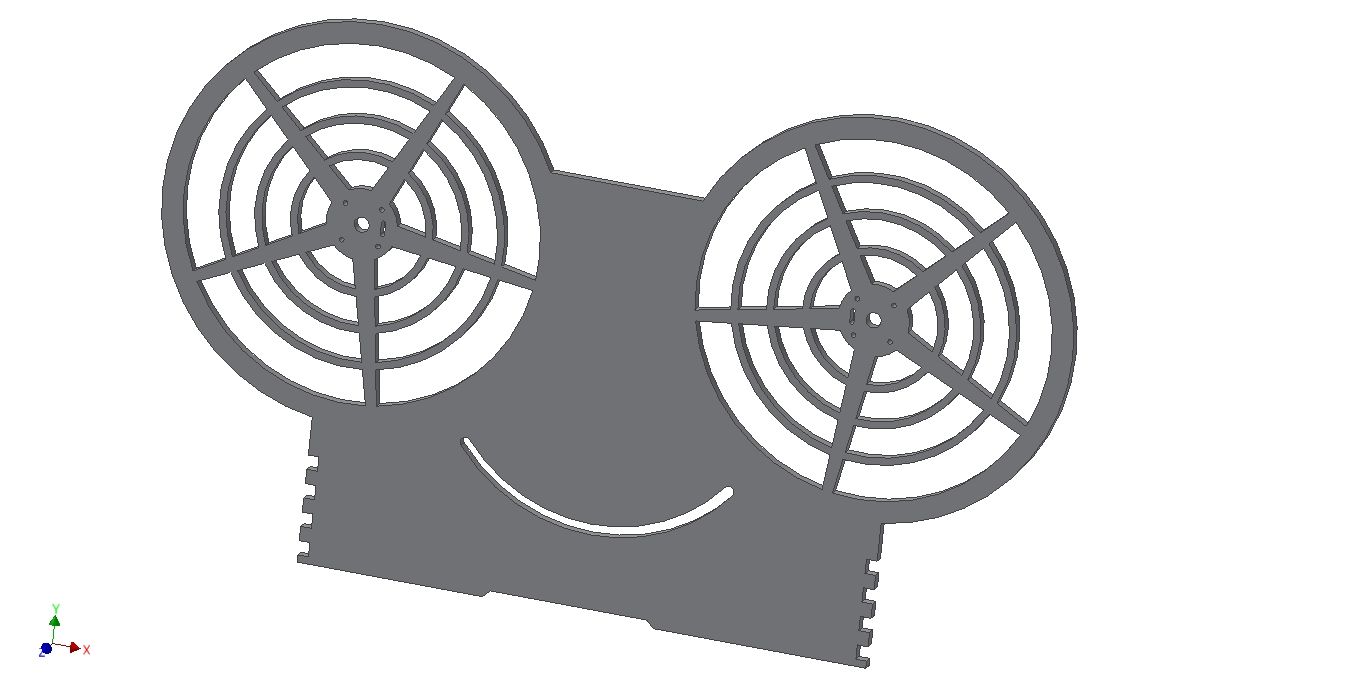 After settling dimensions, I filled the propeller disc back in with a rudimentary grille/guard to ward off most of the death and dismemberment. The smiley face is purely because I said so.

The extent of the design is shown here. After the back plate, it was a relatively simple job of adding two longitudinal beams and two bulkheads in the middle. You sit in the middle section, legs in the forward section , and the battery pack would hang out behind you. Shown on the far side of the device (on the right of the picture) is an anchor for a cut-up bike handlebar, upon which throttle handles were going to be mounted. Speed holes were added because, well, speed.

All I wanted was the 2D profiles of the parts, for it was time to… 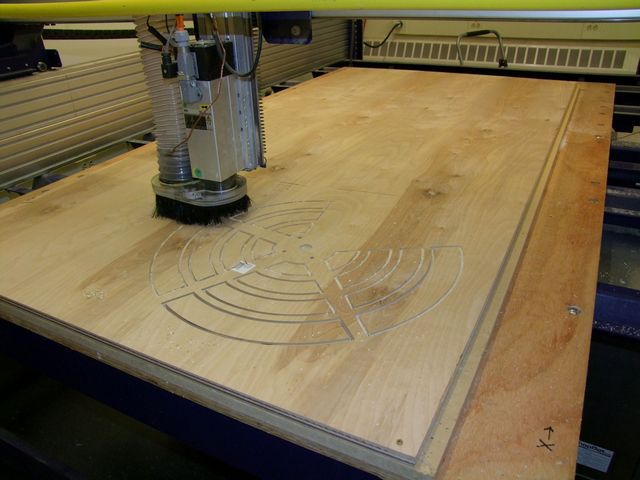 …Get routing. The material is 3/4″ birch plywood out of a shop material leftovers pile. The researchers & students who come through here regularly leave materials behind, and over time they get consumed by other students and researchers. It’s the world’s most inedible, artificial food chain! Statistically speaking, it was going to become either something like this, or a potentially metaphoric but abstract piece of public art eventually.

But perhaps this, too, is art. 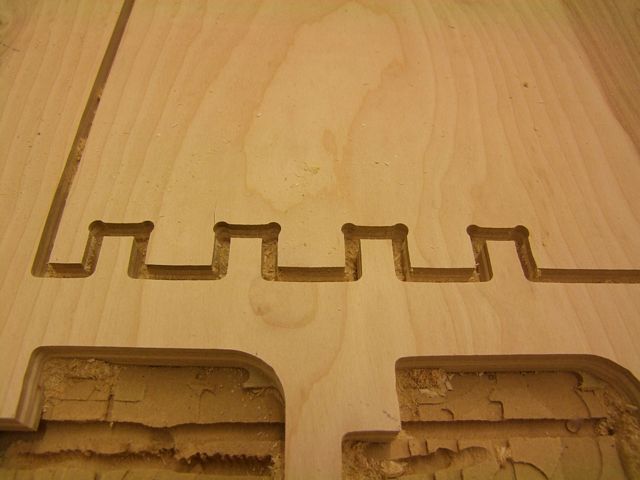 On a CNC router or mill, with a very finite cutter diameter, corner knockouts are necessary to let the tabs and slots fit. Usually, if I’m waterjet cutting a piece, I don’t bother with knocking out the corners because the nozzle diameter is so small. 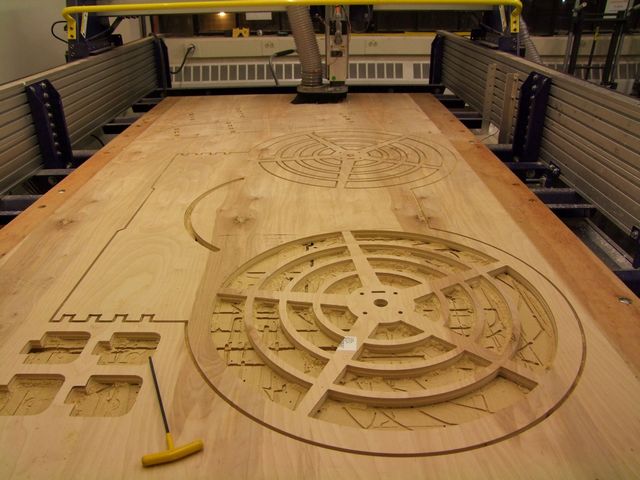 Sheet one of two with 90% of the parts by area is done.

To cut the material cleanly in one pass, I used a 1-flute “compression” cutter – Onsrud #60-111, a staple for users of this machine. It cuts downward on the top surface, so there is no tearing of the top veneer, and upwards on the lower surface.

While this was occurring, the electrical team was hard at work putting together the relatively simple electronics, but it was a task that required lots of swapping connectors: 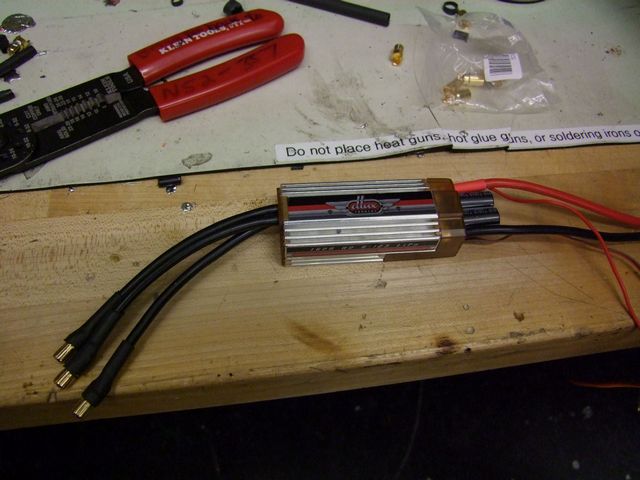 The motor controller of choice was the Turnigy dLux 160A HV,  featured in a handful of projects (including BurnoutChibi) in the MIT-centered electric vehicle building cloud. It’s got a reasonable build quality and features for the size and price. I wouldn’t trust it to 160 amps in a ground vehicle appl… wait, let me rephrase that: in a traction-propelled vehicle application.

For once, we are actually using these damn things to run propellers. 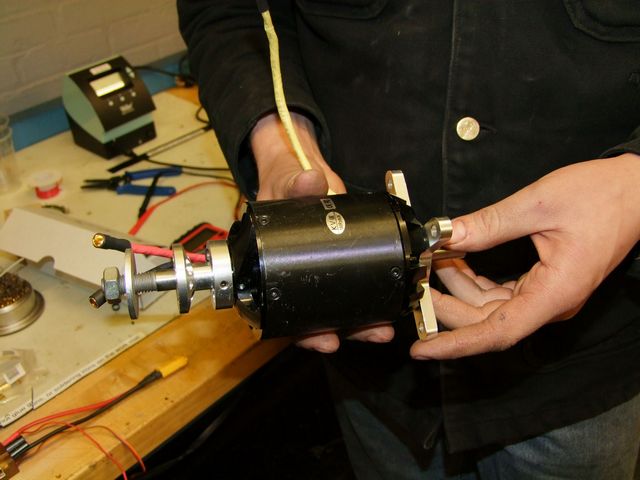 Here it is, the venerable C80-type Melon outrunner motor. These days, they’re getting increasingly hard to find – Adam custom ordered a run  of these from one of the original OEMs – and certainly cost more than $110 now. One place you can still get them is Alien Power Systems. 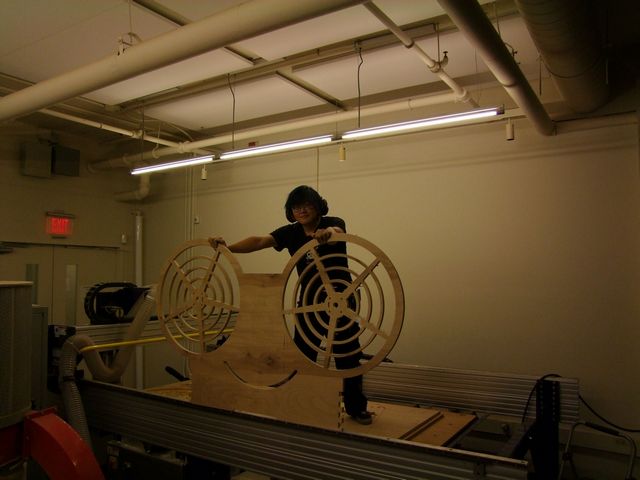 In the process of tearing all the cut parts out… 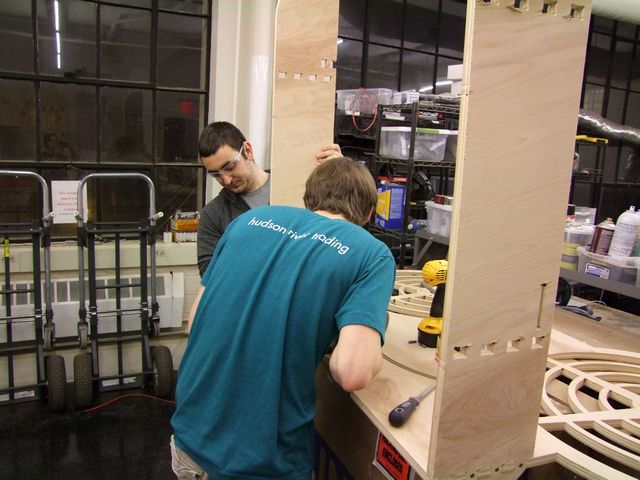 Streaming assembly as I pulled parts off the router. 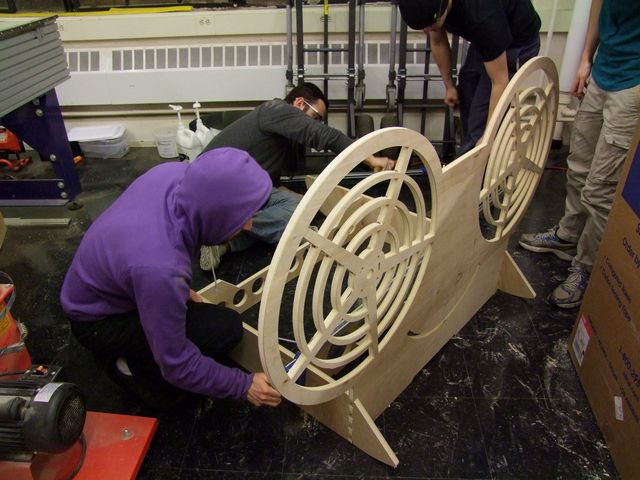 More people came upstairs to help pitch in. By about 1:30AM, the structure’s almost done. 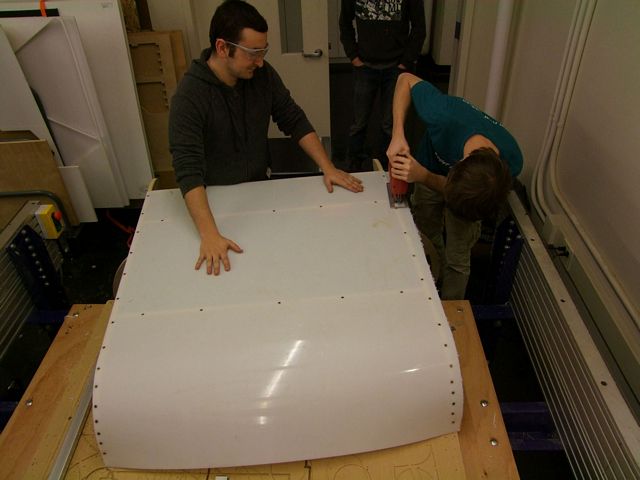 Smashing the bottom skin on was an ordeal that involve a lot of clamps and people keeping their weight on things. The material is high density polyethylene (HDPE). Here, the bottom plate has already been attached and is now being cut to size.

The plastic was cold-bent, so the last few screws on the curved front were a little heartstopping to install. Afterwards, we waved heat guns over the bend area to try and thermally relieve the stress. 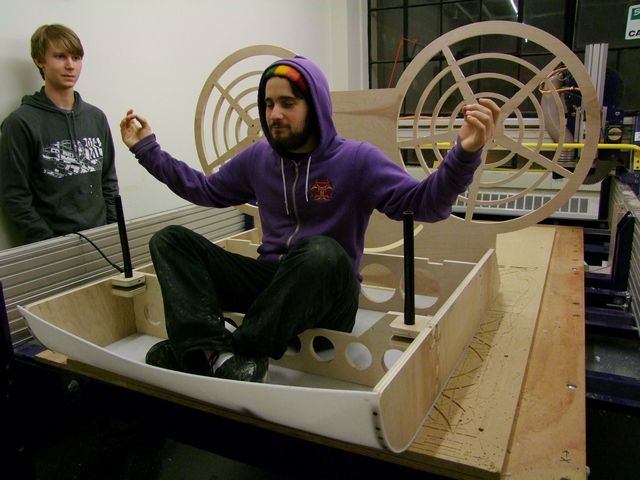 After main assembly finished, a moment of zen by muffin.

The vertical handle sticks seen are halves of a bike handlebar. On their ends will be mounted e-bike twist throttles. 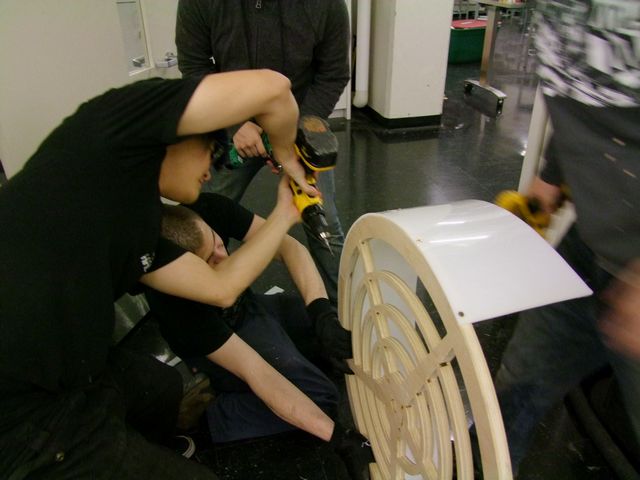 Drill contortioning was required to fasten the propeller shroud, which is pretty much the only good idea on this whole build. 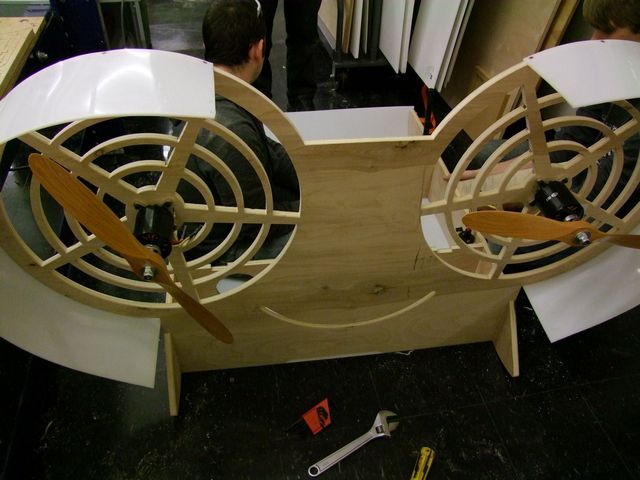 Props and motors are mounted! Time to start wiring things up. 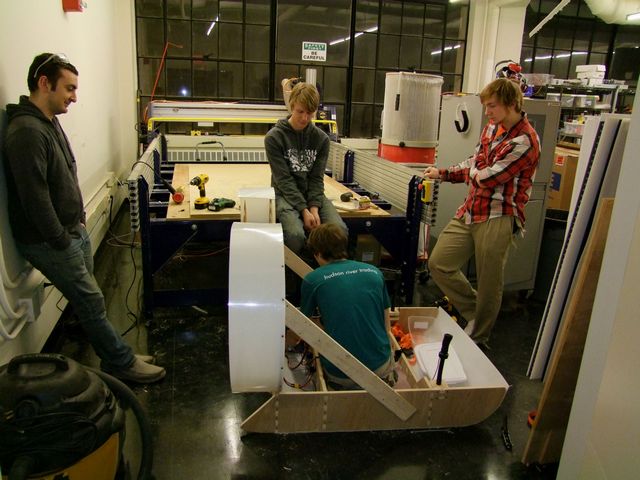 You know that generic union labor joke that goes something like “One guy does the work and 3 others watch him”? MITERS works like that too! 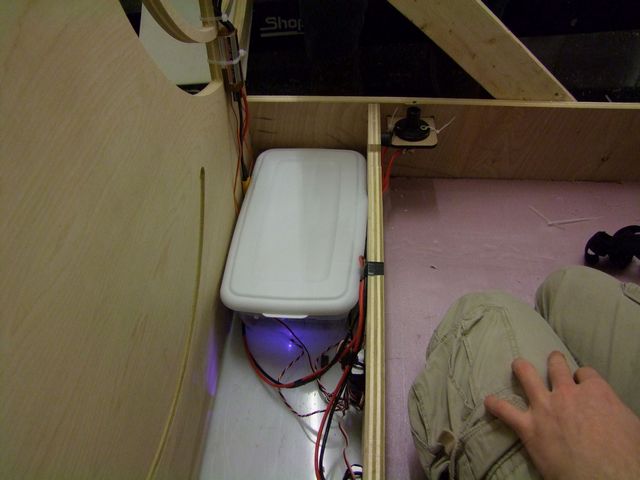 Control electronics consisted of two servo testers, one connected up to each hand throttle. The servo testers’ knobs are potentiometers being read as voltage dividers, so it was actually very simple to swap in the voltage output of the active Hall Effect sensor throttles.  The output of the servo testers are pushed to the ESCs immediately.

The ESCs themselves are zip tied to an arm of the propeller grille to receive active cooling airflow. Winter is literally the best possible time to run these things! 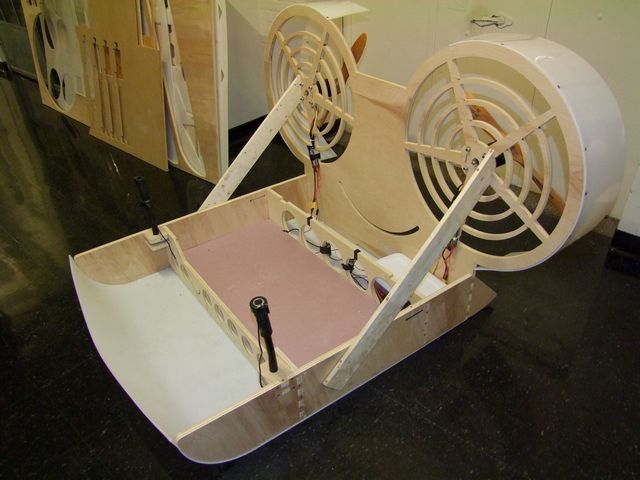 The one and only “beauty shot”, for tenuous definitions of beauty, taken at around 4:30AM. The seat cushion is a chunk of found insulation foam.

Not pictured here are the batteries, which was a small (small in airquotes) 10Ah, 10S (37v 10Ah) lithium polymer battery from my Nuclear Arsenal. It was later swapped to a bigger 12S lithium iron phosphate electric car battery module, at 16Ah, for increased run time.

Fact #1: Nobody can steer the damn thing.

Fact #2: The right side motor controller was actually a 120A model – but it had the same casing and the only difference was the numbers “120” in place of “160”. Whoops, must have grabbed this one by mistake. It died not long after the last shot of the video, and testing ended for the night.

We decided to fall over in the shop on whatever vaguely soft and warm surfaces there were, and replace the controller in a couple of hours. By Tuesday afternoon, most of Boston had cracked 2 feet of snowfall. Almost all of the side streets were impassable due to large main streets like Massachusetts Ave. getting plowing priority, so it was very smooth and graded over!

The toasted controller was replaced with equivalent 160A model, and more hilarity ensued.

Fact #3: Still nobody can steer the damn thing. But everyone is getting steadily better at it! A set of skis bolted to the bottom, or even two or more rails of the same plastic, would have helped for sure.

Testing stopped after the evening hours when traffic picked up due to people emerging from their hiding places, and we were running down the batteries again.

And thus ends the story of Meloncraft. Currently sitting intact in an area of the shop that I cannot keep it in for long, it will likely have the valuable parts dismantled and the wooden body posted to the free stuff mailing list for future young endeavoring powersledders. And because nobody could agree on a better name than meloncraft, I’m just going to declare that it be called Meloncraft.

4 thoughts on “The Curious Story of Meloncraft”