Excuse the clickbait title, I’m practicing for my new career as a Buzzfeed blogger.

A long time ago, I was a connoisseur of fine miniature hub motors. Okay, so even not-so-recently if you count the non-dedicated hub motors I’ve built, but overall, I like constructing my own custom motors for things since I get to tune them for the application. When I started building small EVs here at MIT in 2007 or so, it was a great way to motivate me to learn about how motors worked. Some (many) people have asked me why I didn’t make the hub motors my ‘research’ or thesis, which I could have, or why I didn’t start selling them, which I could also have started doing so. In fact, Chibikart’s motors were the direct result of getting some ‘pre-production’ prototypes made through mfg.com since I was entertaining the idea.

The real answer is that you couldn’t have gotten me to take it seriously enough to do either. I don’t like taking anything I do seriously (and anyone else taking it seriously is just unthinkable!). This makes me wonder some times why I’m doing such things as selling Ragebridges. I’m very weird among people I know in that I desperately want my ideas to be knocked off by the Chinese and marketed en-masse, because it means I don’t have to deal with it any more!

Hey, I hope some of them are following RageBridge 2’s development…

I regularly scout the furthest frontiers of shady Chinese component offerings (read: surfing Alibaba and Aliexpress) in the hopes that one day, some enterprising Chinese e-bike shop will awaken to the gospel of small hub motors and make the 5″ brushless size I made years ago. I’ve been watching the sizes creep down slowly. In around 2007, you couldn’t even really find brushless 8″ ones – they were mostly DC. In recent years, 6″ brushless ones have become available, but I haven’t seen then really used in anything – some times, I wonder how these Chinese shops get any business. Finally, about two or three months ago, the inevitable occurred. Someone posted a 5″ brushless direct-drive hub on AliExpress!

At the time, I wanted to pick up a few for dissection, but the high combined price including shipping put me off – I was probably coming straight off the Great Fuel Filter Debacle of Dragon*Con 2014 and couldn’t spare to drop $400 randomly. That changed a few weeks ago, when I finally decided that I had to find out what the Chinese managed to set up in my turf.

Shortly thereafter, I received a heavily-taped box with something solid tossing about inside. You never know with these sketchy Chinese vendors, so let’s see what’s inside. At worst, I’m okay with having some small cast iron billets, so there’s that. 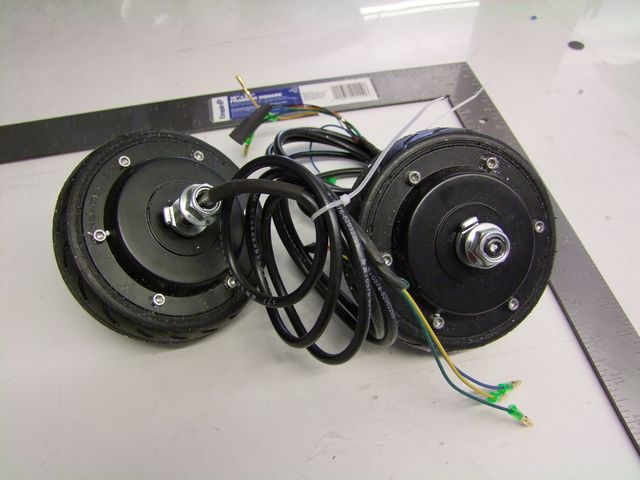 Well, they’re definitely round. And have wires coming out of them. Once again, I’ve narrowed down the goods between either small land mines or motors!

I was impressed with the construction, to be honest. The fit and finish was decent – I personally think the days of the crude, out of round, chatter-mark filled Chinese machined product is over, unless you personally order it that way.

The endcaps are die cast aluminum, and the center shaft a fairly standard M12 thread on both sides with 10mm wide flats. A wire access hole runs down one side, measuring about 8mm diameter, so it doesn’t leave that much meat in the steel for taking loads, but the short distance you should be mounting these between forks makes it tolerable. I think one-side mounting these, such as on a Chibikart, will be unacceptable. 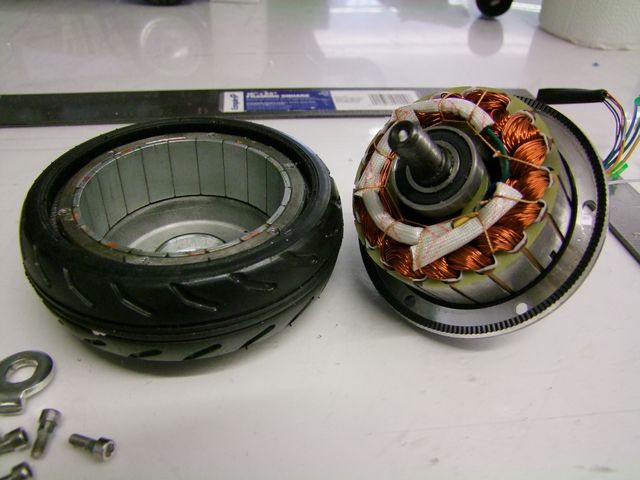 I very quickly cracked the casing apart by removing the radially-positioned M4 screws. I swear I’ve made this exact thing before.

I kid, of course. There’s several differences between my designs and this commoditized one. First, you have to split the motor apart to change a tire, whereas in my final few designs – piloted by Razermotor v3, Skatemotter, and Chibikart’s motors, a threaded ring clamps on the wheel, allowing it to be changeable. Yet I’ve also built motors where the endcaps have to come off to change the tire, such as the original Razermotors.

There’s upsides and downsides to both. You could argue that the lifetime of these components is not long enough to justify an easy way to remove the wheel, and I’ll totally buy that argument for these kinds of applications, but I chose to investigate how the wheel can be made easily removable just in case (or, if I ever get these strong enough to do burnouts with, of course).

Because of the lack of radial dimensional overhead needed to mount a threaded ring, they could afford to make the stator and magnets larger than I’ve been able to. I’ve never casted or molded my own tires, instead opting to stick to commercially available scooter tires, which tend to be tall in profile. As a result, I’ve been generally constrained in stator size in both diameter and width. 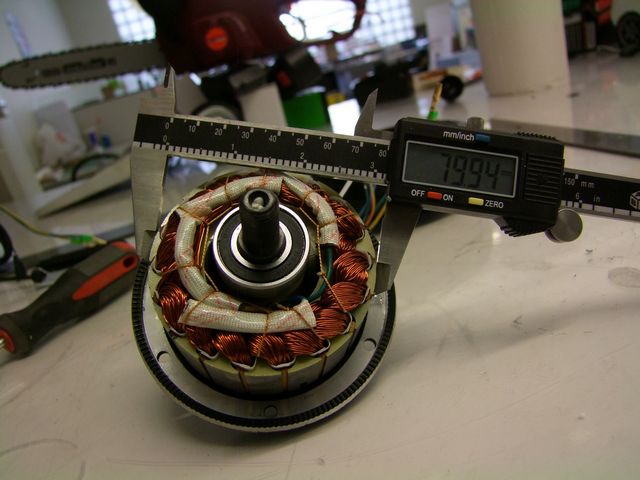 Not so with this. This is a full 80 x 30mm stator, with 18 poles instead of the usual 12 found in mine, and 20 magnets in the rotor. Getting custom stators made was one of the reasons I didn’t want to commit to production – they’re not single-packaged items in little ziploc bags; the tooling cost to set them up once was several thousand dollars – and that was a Chinese shop quote I got from mfg.com. Stamping 100,000 little tabs of steel and pressing them together still takes massive capital equipment.

(And no, casting iron-powder and resin material was not nearly a viable option for production.) 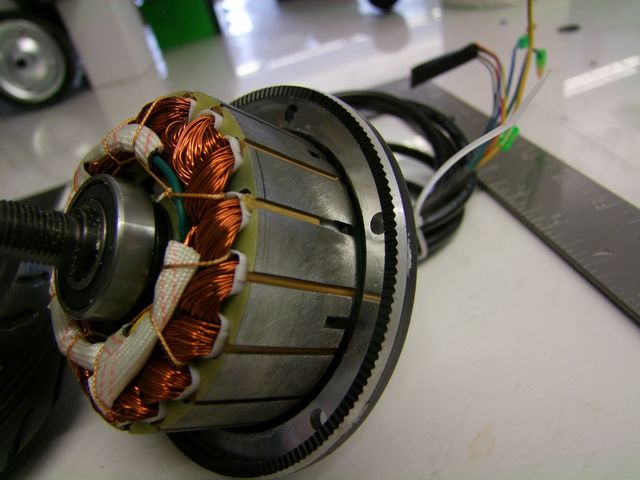 I’m going to hazard a guess that they are actually spaced 24 degrees apart, which would mean each sensor is technically 240 electrical degrees apart – but all that does is wrap around the 360 degree mark, leaving you “120 degree” spaced sensors anyway. Still, that doesn’t look like 24-ish degrees. 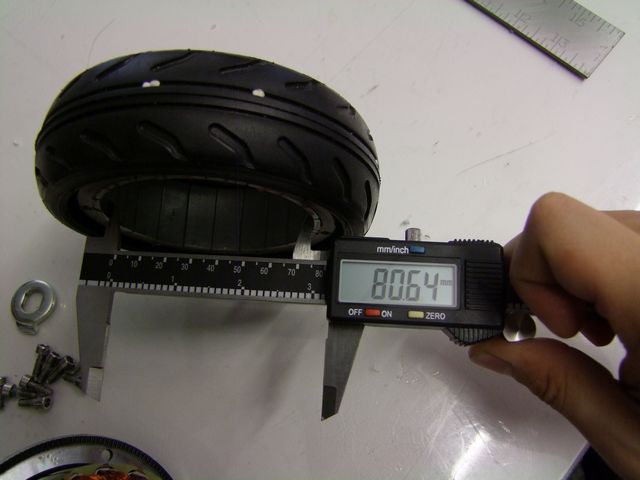 The OD of the stator is 80mm even, and the ID of the magnet ring is only 80.6mm – leaving a 0.3mm airgap. Holy crap! This thing is tight. I’ve left 0.3mm airgaps before, such as in the Chibikart motors, but have generally favored 0.5mm for “Charles cares even less than the Chinese factory” tolerances.

Alright, enough gushing, time to do some Science™! 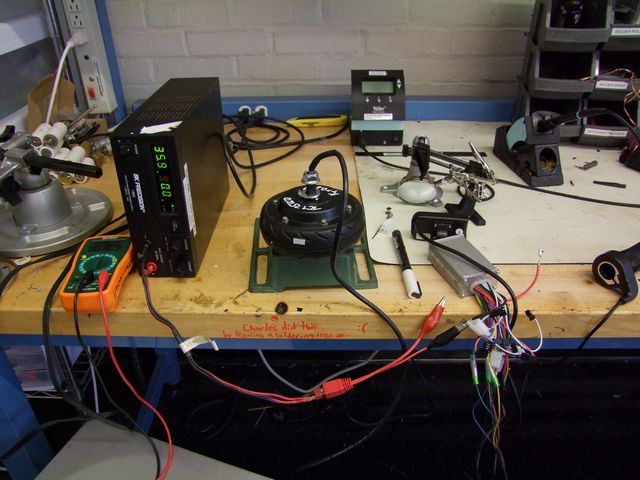 Some simple science for now. I just wanted a top speed figure, Kt, and line to line resistance – that’s all I really need to know for the time being.

This being Chinese e-Bike parts, the mini-Jasontroller I dug out of a cabinet was literally plug and play with the motor – it just needed to get to know the sensor arrangement, which it did after one full speed run. The throttle pins also plugged right in.

Gee, with service like this, why do I bother doing anything at all?!

Here’s what I collected.

I didn’t count the number of turns on the stator, since it’s both “Hobbyking’d” and well put together, but inverting my rough hub motor math (god that thing is old – maybe it’s time to rewrite it) yields “About 11 turns”, which is visually reasonable.

They can get away with having about 25-30% of the turns I have on my scooter motor because of the scaling laws of the motors. Increase the stator volume and you gain torque by dimension² – both larger radius AND longer length contribute to torque production, and more stator poles and magnet poles also divides down the mechanical speed of the motor relative to the electrical “speed” more, contributing to torque per amp.

Overall, if I start with my 36-turn, 70x20mm scooter motor with 12 poles/14 magnets and arrive at this thing, it works out closely. 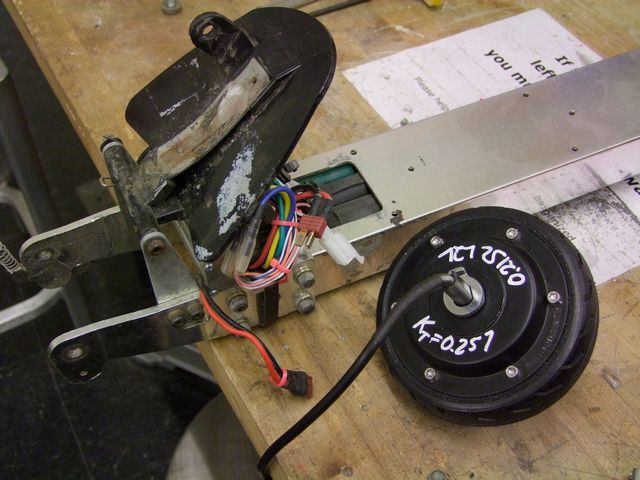 Enough about the science – how does this thing ride? Ever since Kitmotter exploded (because it was made of wood) at Maker Faire 2013, Johnscooter has been sitting on a shelf. Well, I pulled it back out after getting these motors, and noticed that they could fit perfectly in between the rear forks!

However, since this motor had a fixed shaft with external threads, I had to turn the single-hole forks into “dropout” style forks by cutting a slot through to the mounting hole. 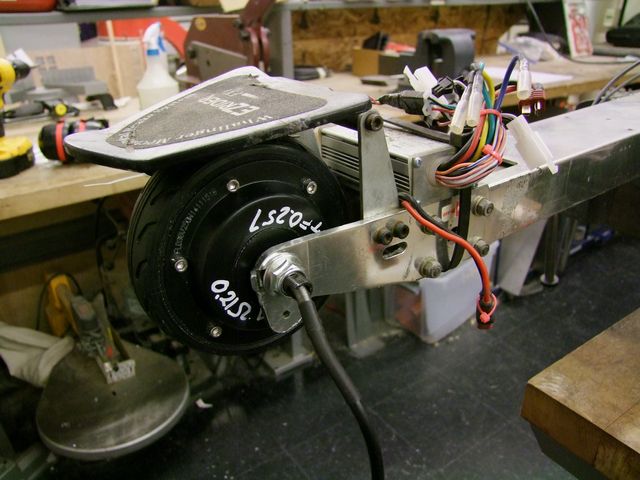 Well, that was certainly easy. Everything from here was, again, plug and play. 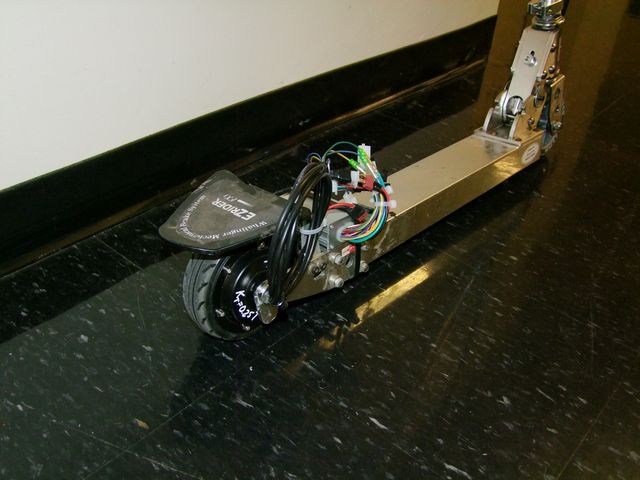 I’d say it looks quite good (minus the bundle of wires). The batteries needed a bit of cycling to wake back up. 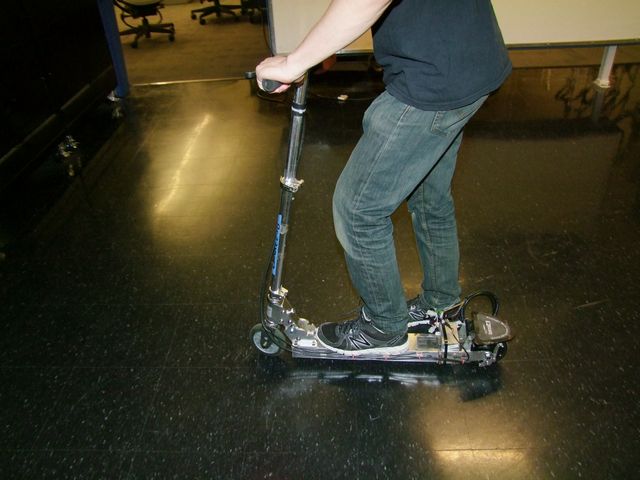 Finally, it was time to con people into riding it.

The full-throttle pull is, of course, not that impressive, given that it is a small hub motor. However, it’s also not slouchy; certainly better than Kitmotter 0002 was. This is also with an unmodified mini-Jasontroller that’s putting out about 15 amps maximum, in a rather limited speed interior test. With an R/C wattmeter watching, it was never really pushing more than 200W into the motor. I recorded better results riding this thing home (I’ve forgotten how to ride a tiny-wheeled scooter) since it was able to get up to speed, pulling around 350W and hitting about 15mph (20kph) or so.

That’s as good as RazEr-original ever was! (Razer Rev is kind of a monster with my custom 3-way-Frankensteined 50mm wide stator, and is an exception to the dorky small scooter rule).

I’d say the manufacturer’s “250W” continuous rating is reasonable given this size of motor, and for added durability and thermal protection, I would infuse the windings with epoxy resin. Unlike my motors’ large aluminum shafts, the stator will have a hard time heat sinking through the steel shaft, so severe overdriving would be out of the question barring some case venting.

A bit of internet sleuthing led me to find some other vendors for this type of motor, which makes me wonder who actually makes them – I didn’t see any manufacturer’s markings at all on the inside. Here is one – UUMotor.

So what does this mean for you? Well, now with this resource, you guys can…

I do have half a mind to revive the RazerBlade project using this hardware and mini-Jasontrollers, but perhaps that is an exercise for one of you. For the time being, one of these motors will continue to live on Johnscooter (at least until I cook up a new Kitmotter design) and the other will be a lab curiosity. The maker universe has much to benefit from the gradual commoditization by the Chinese manufaturing cloud of once hard to access technologies, even if some individuals or companies might be impacted negatively. Hell, I should be pissed that someone else took my idea to fruition, but I purposefully did not take those actions myself, so I’m not going to complain.

So, when can I have my knockoff Ragebridges?!

Speaking of China, I’m going to be in the ‘hood again in a week. The current lineup is:

I have no agenda as of the moment in SZ or Tokyo, so if you will be around, or know some places I should drop in on, or places to stay/crash, feel free to leave comments.

I’ll make a separate post with my contact/social media info in China once I get that together myself.

There will be melons.

4 thoughts on “You Won’t Believe What the Chinese Did This Time! Beyond Unboxing of a 5-inch Brushless Hub Motor, and My Upcoming China Trip”